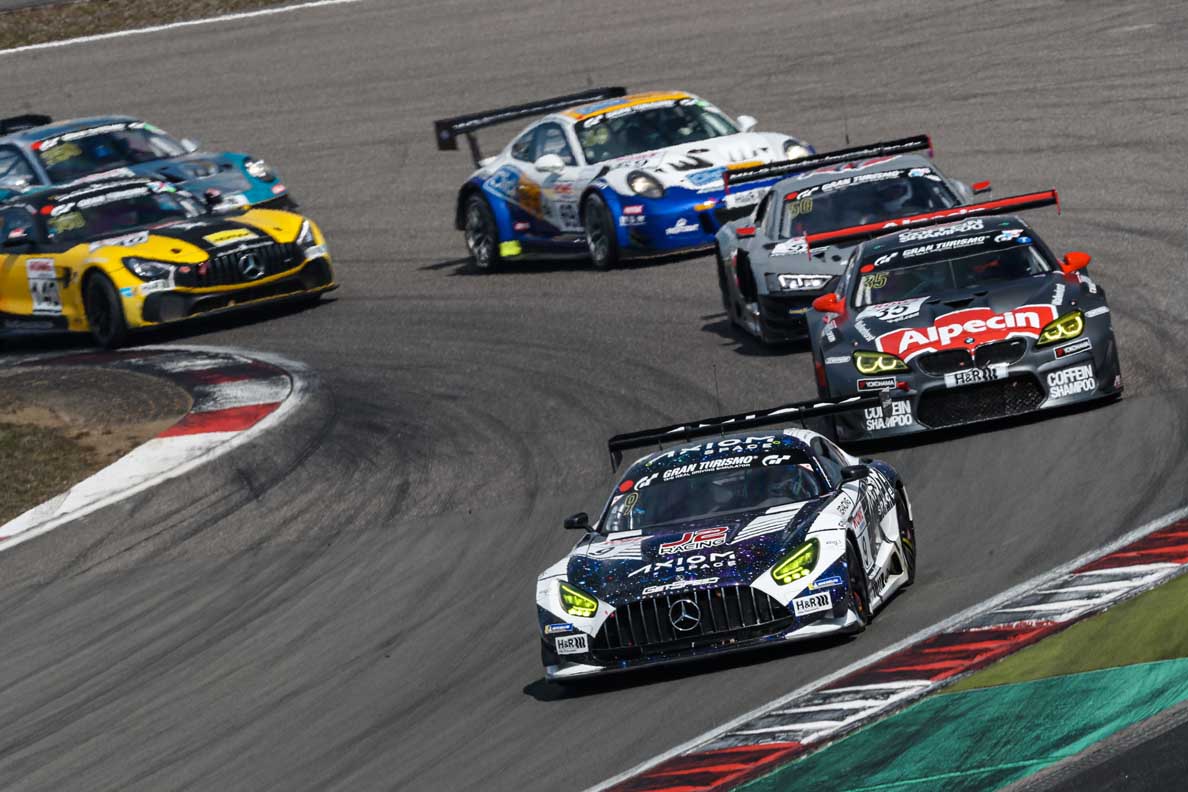 In the delayed season opener of the Nürburgring Endurance Series (NLS), the Mercedes-AMG Customer Racing Teams score multiple class achievements. With first place in the SP9 Am class (13th place overall) by the #9 GetSpeed Performance entry, the Mercedes-AMG GT3 got its season at the Nordschleife off to a successful start in the 45th NIMEX DMV 4h-Rennen. The Mercedes-AMG GT4 also continues its successful streak in the NLS: after four hours of racing, BLACK FALCON Team TEXTAR (P1 for #140 and P2 for #141) secures a 1-2 in the merged SP4T and SP8T classes. The #162 Schnitzelalm Racing entry adds another victory in the SP10 class. Following the cancellation of the first round due to the weather, the customer teams now racked up relevant initial mileage in testing to be perfectly sorted for the season highlight, the ADAC Total 24h race (3-6 June).

The anticipation among the Mercedes-AMG Customer Racing Teams for the season opener was huge, but the contingent was reduced due to the GT World Challenge Europe event at Monza that is also taking place this weekend: two Mercedes-AMG GT3s and four Mercedes-AMG GT4s took to the 24.358 kilometres long combination of the Nürburgring Nordschleife and the short configuration of the Grand Prix track in perfect weather conditions.

In morning qualifying, Moritz Kranz (GER) and Janine Shoffner (GBR) put the #9 GetSpeed Performance Mercedes-AMG GT3 on pole position in the SP9 Am class, equalling 15th place on the overall grid. Starting driver Moritz Kranz and later on also Janine Shoffner had a trouble-free race and maintained their class lead throughout. After 28 laps, final driver Janine Shoffner crossed the finish line first in class and in 13th place overall.

In the #45 CP Racing entry, Adam Christodoulou (GBR) started from 19th place on the overall grid (P3 in SP9 Pro-Am) and subsequently handed the Mercedes-AMG GT3 to his teammates Charles Putman and Joe Foster. In their first race with the Mercedes-AMG GT3 at the Nordschleife, the main goal for the American duo was to gain as much experience as possible and they did so successfully until just before the end. While running third in the SP9 Pro-Am class, the team then had to park its car on the final lap following contact with an opponent and wasn’t classified.

Mercedes-AMG GT4 remains on course for class success
In the GT4 classes, the Mercedes-AMG GT4 seamlessly continued its success from the previous season with five SP8T class wins from as many races. The SP4T and SP8T classes having been merged this time, BLACK FALCON Team TEXTAR scored an undisputed lights-to-flag victory with starting number 140.

The trio of Mustafa Mehmet Kaya (TUR), Gabriele Piana (ITA) and Mike Stursberg (GER) alternated behind the wheel of the Mercedes-AMG GT4. The #141 sister car with Marco Müller (GER), Stephan Rösler (GER) and Ersin Yücesan (TUR) rounded out the 1-2 in class by finishing second. In the SP10 class, Schnitzelalm Racing looked set for another 1-2 for a long time with its pair of Mercedes-AMG GT4s #162 and #165. However, the #165 car came off the track at Metzgesfeld while in the lead with around one hour remaining. After that, the sister car with Fidel Leib (GER), Marcel Marchewicz (GER) and Reinhold Renger (GER) inherited the lead and successfully brought it home.

The next round of the Nürburgring Endurance Series is the 62nd EIBACH ADAC ACAS Cup on 1 May.

Stefan Wendl, head of Mercedes-AMG Customer Racing: “Perfect weather, successful class results and important initial test mileage in race conditions – the season at the Nürburgring Nordschleife has finally started. Congratulations to all teams and drivers on a very good season opener in the Nürburgring Endurance Series! Now, we are hoping for similarly good conditions for the third round, for which some of our teams and drivers that are on duty in GT World Challenge this weekend will be heading to the Nürburgring again. Then, we can push further in our preparation for the season highlight that is the 24-hour race.”

Adam Christodoulou, CP Racing #45: “In qualifying, we only managed to do one decent lap, but from then on, we steadily got faster. At the start of the race, I managed to make up a few positions. After that, Charles and Joe racked up a lot of experience in their first race with the Mercedes-AMG GT3 at the Nordschleife.

Unfortunately, we were unable to finish the race, we had to park our car on the final lap. Today, we are also sharing in the joy of our colleagues from GetSpeed Performance: it is nice that a Mercedes-AMG GT3 has secured the Am class win.”

Moritz Kranz, GetSpeed Performance #9: “Finally, we were now able to get the season underway with the second NLS round and I am very happy with the Mercedes-AMG GT3. The car is making things fairly easy, you get a lot of feedback. I did two stints and I was able to learn a lot. In my first stint, I was still driving a bit conservatively to get accustomed to the handling of the car while overtaking at the Nordschleife.

In the second stint, I then pushed it quite close to the 100 percent mark. We have won the SP9 Am class, so in that way we have achieved our goal for the weekend and can build on this for the next weeks.”

Gabriele Piana, BLACK FALCON Team TEXTAR #140: “I am very happy that we finally could get our season started and that I was back behind the wheel. We had a good performance all day long and we had some good fights with cars from higher classes. The car was perfect as usual. Likewise, the result for us with victory in class is a super start of the season and I am already looking forward to the next race.”

Reinhold Renger, Schnitzelalm Racing #162: “It was a mega race. The first victory with the Schnitzelalm Racing team. Everything worked perfectly, the set-up of the car was good from the outset. I did the start, that was a bit of a challenge in the packed field. But I held my own and I handed over the car in first place. Then, Fidel and Marcel did a perfect job and brought victory home.” 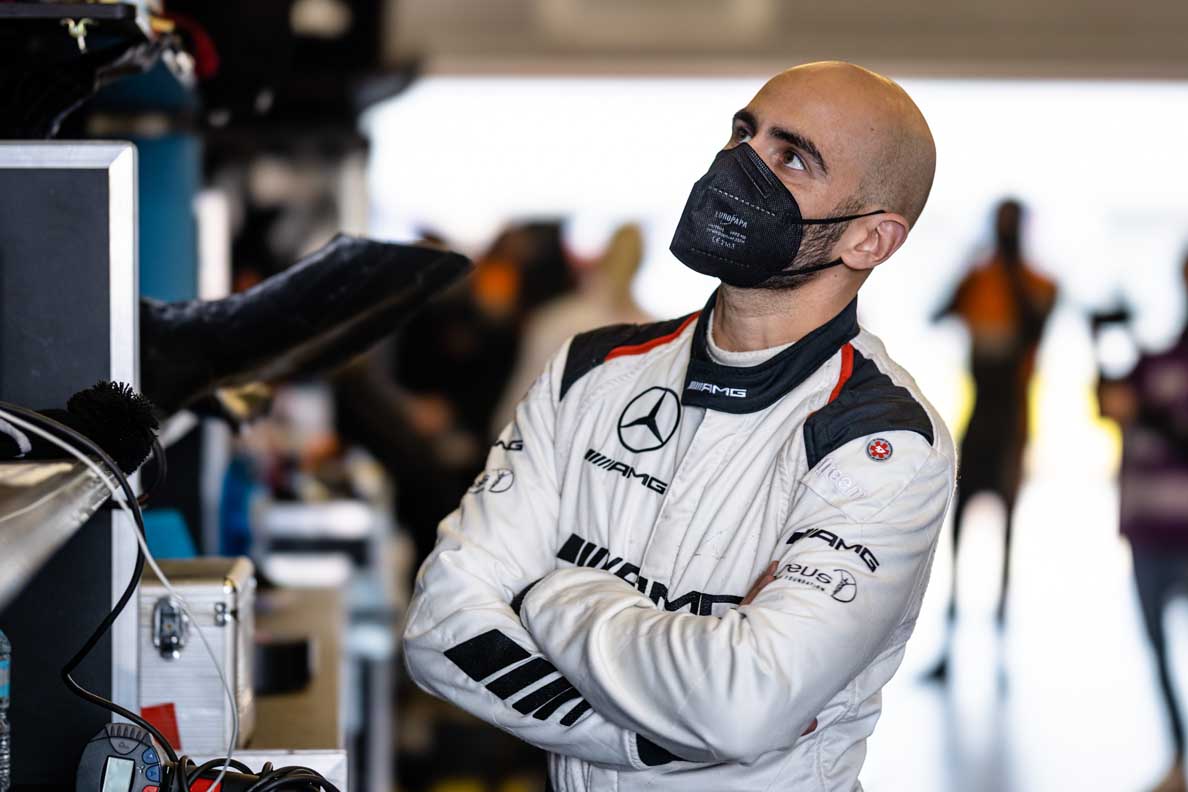 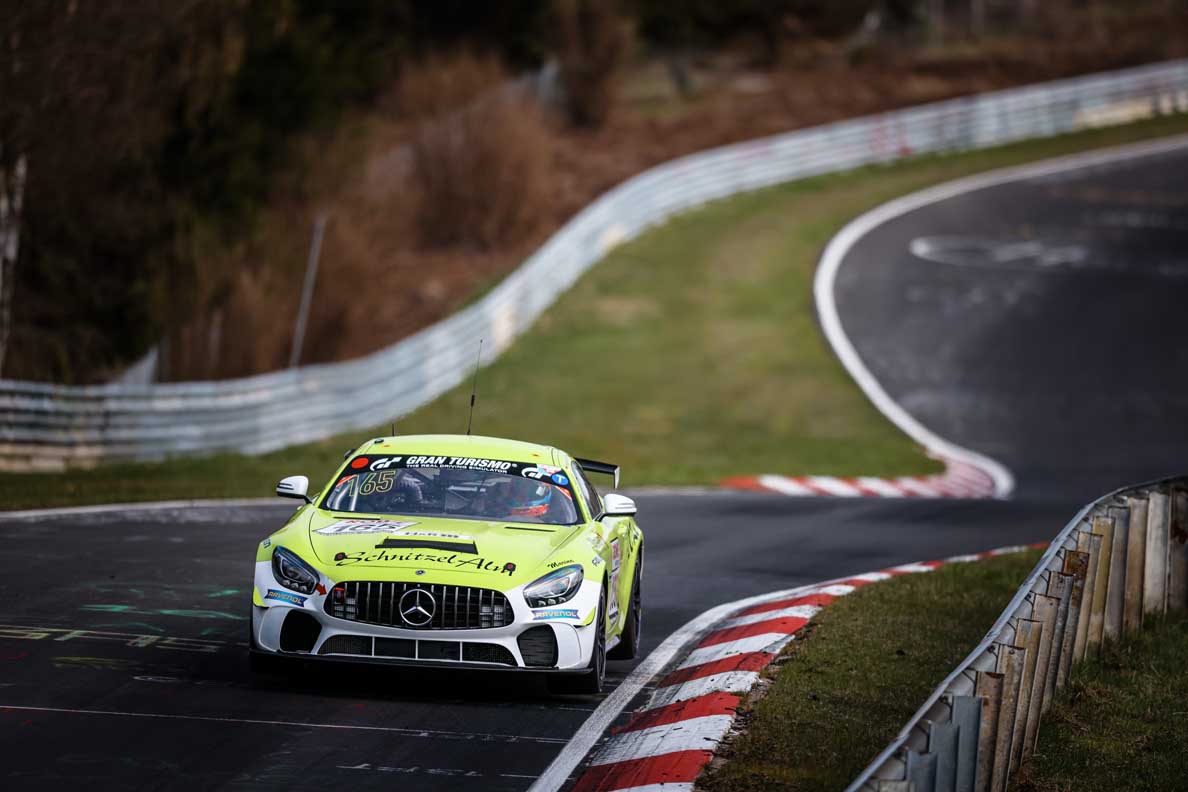 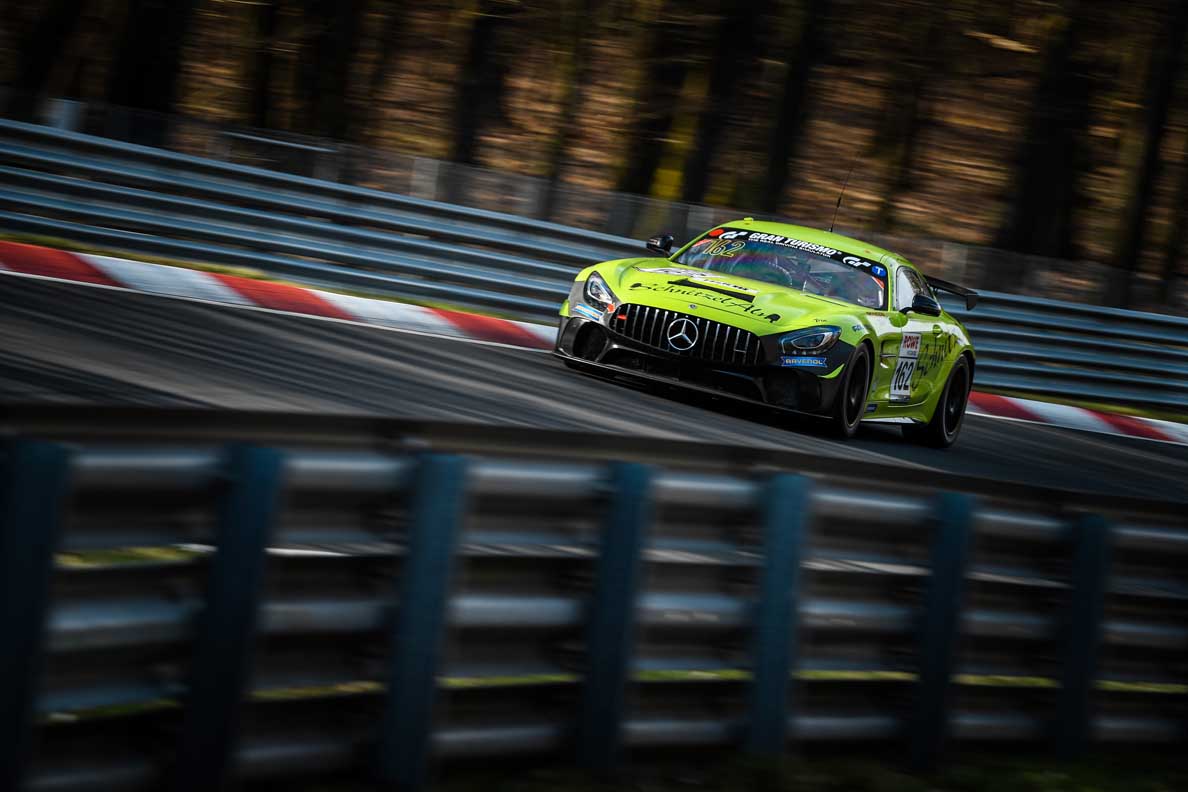 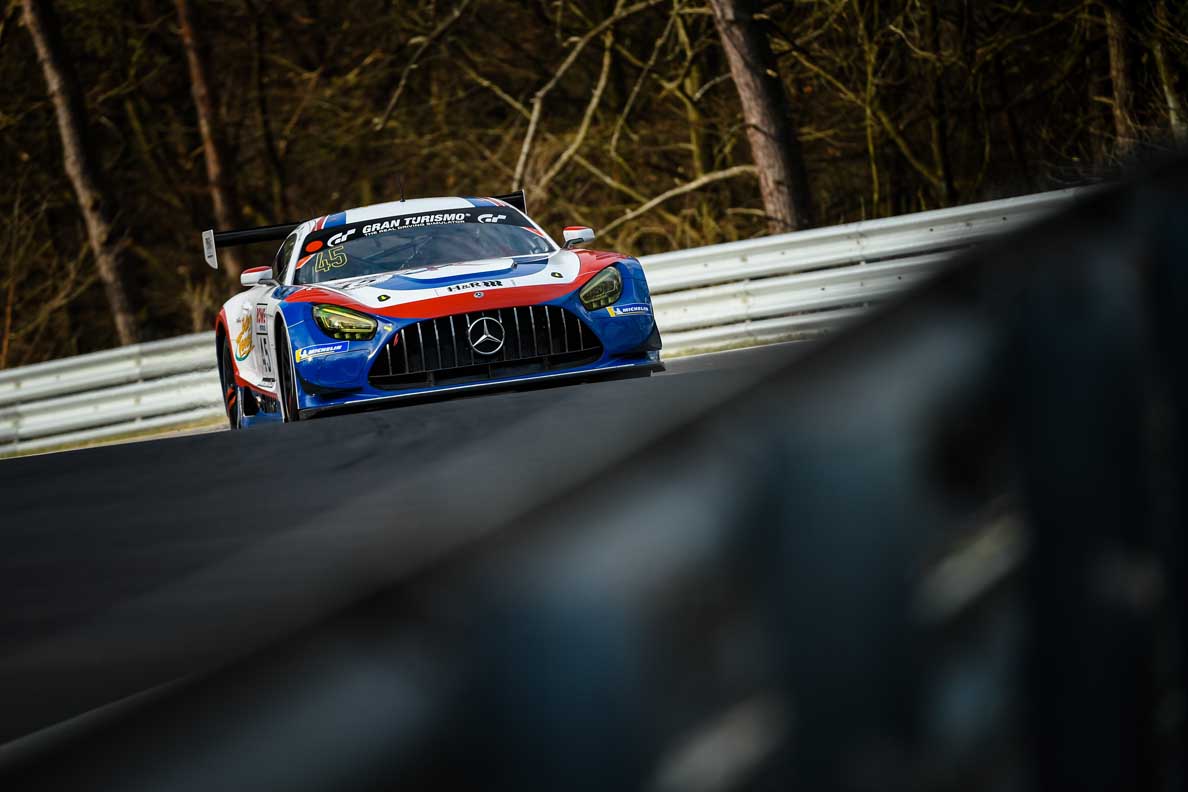 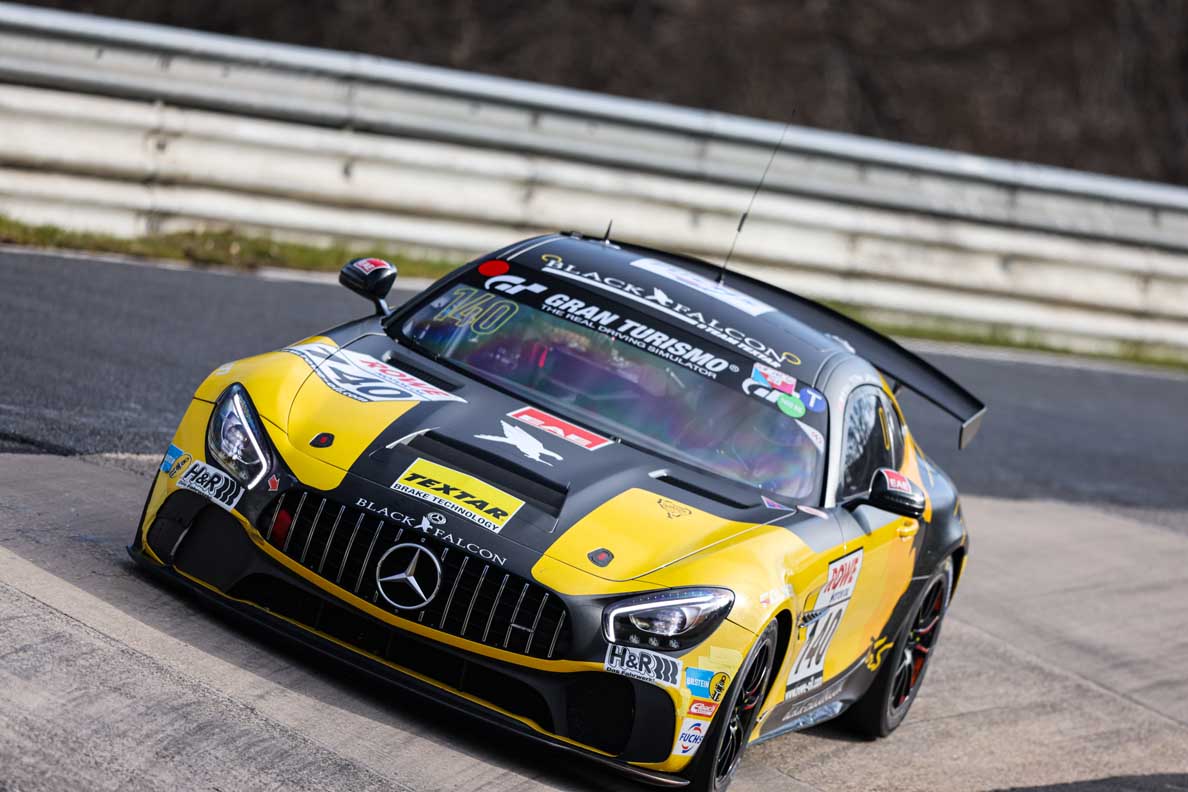 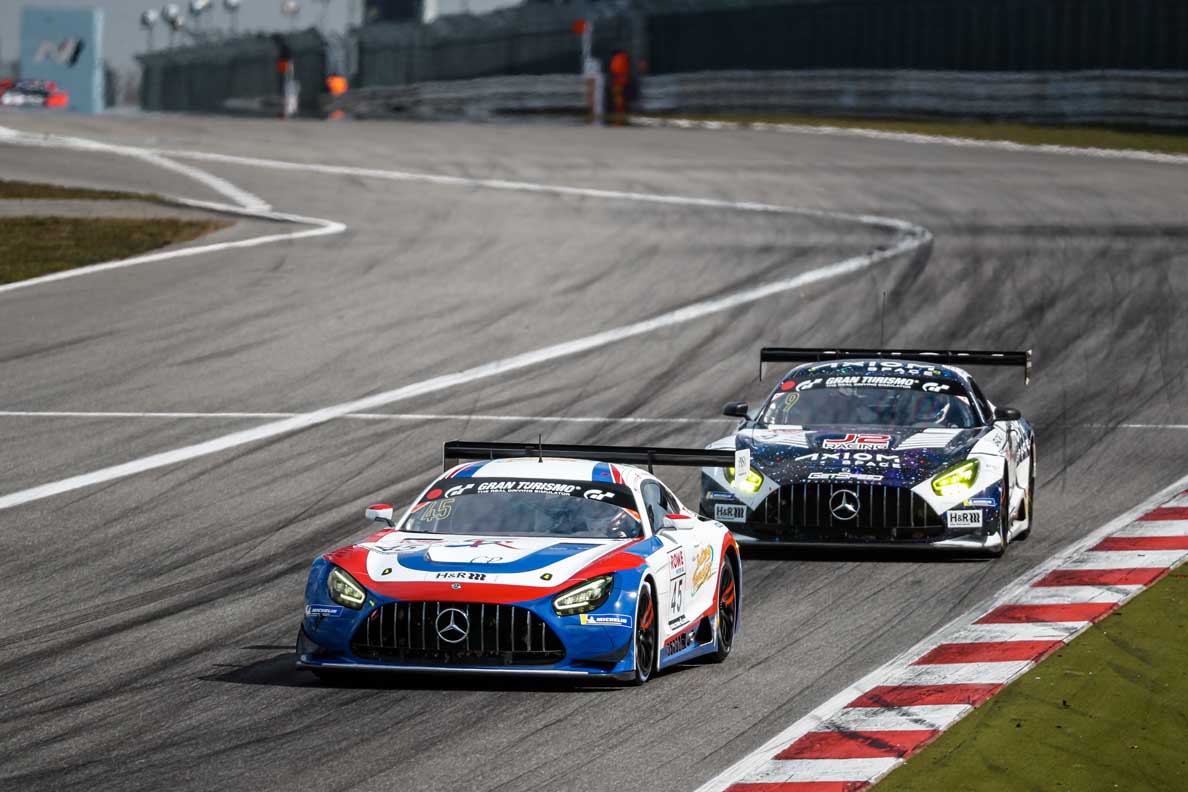 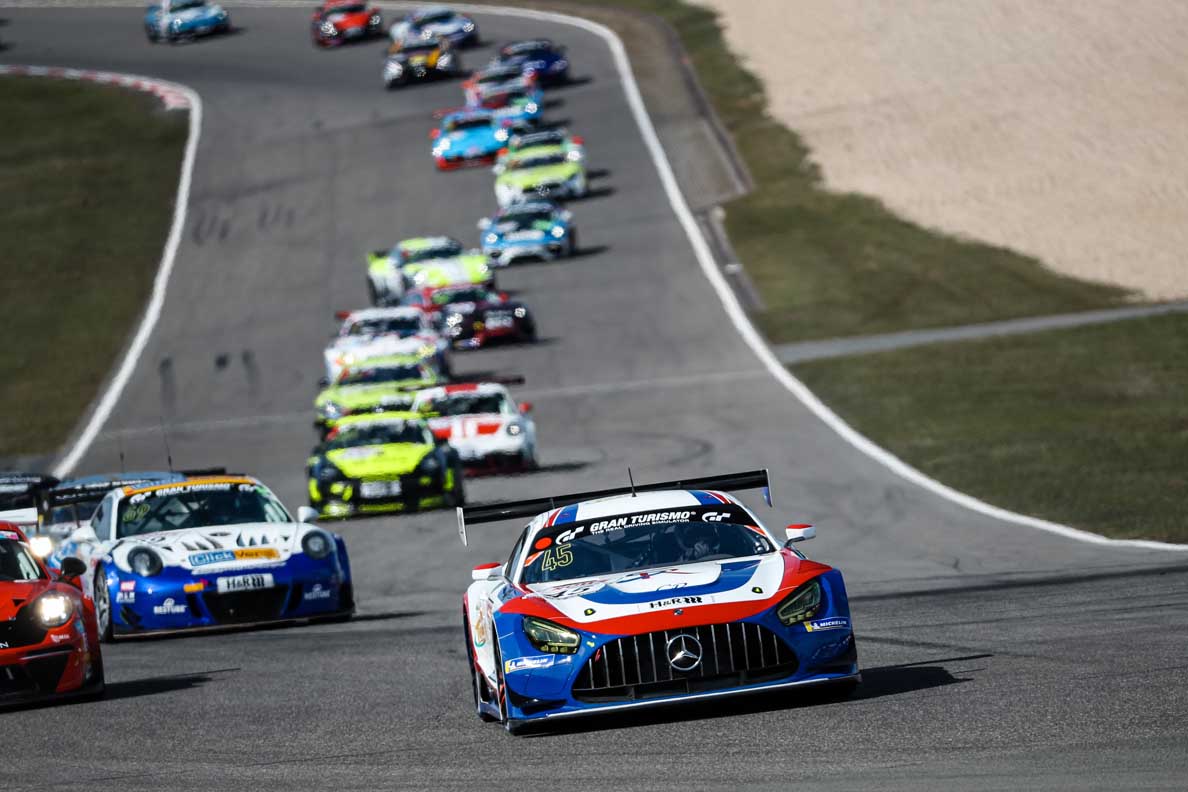 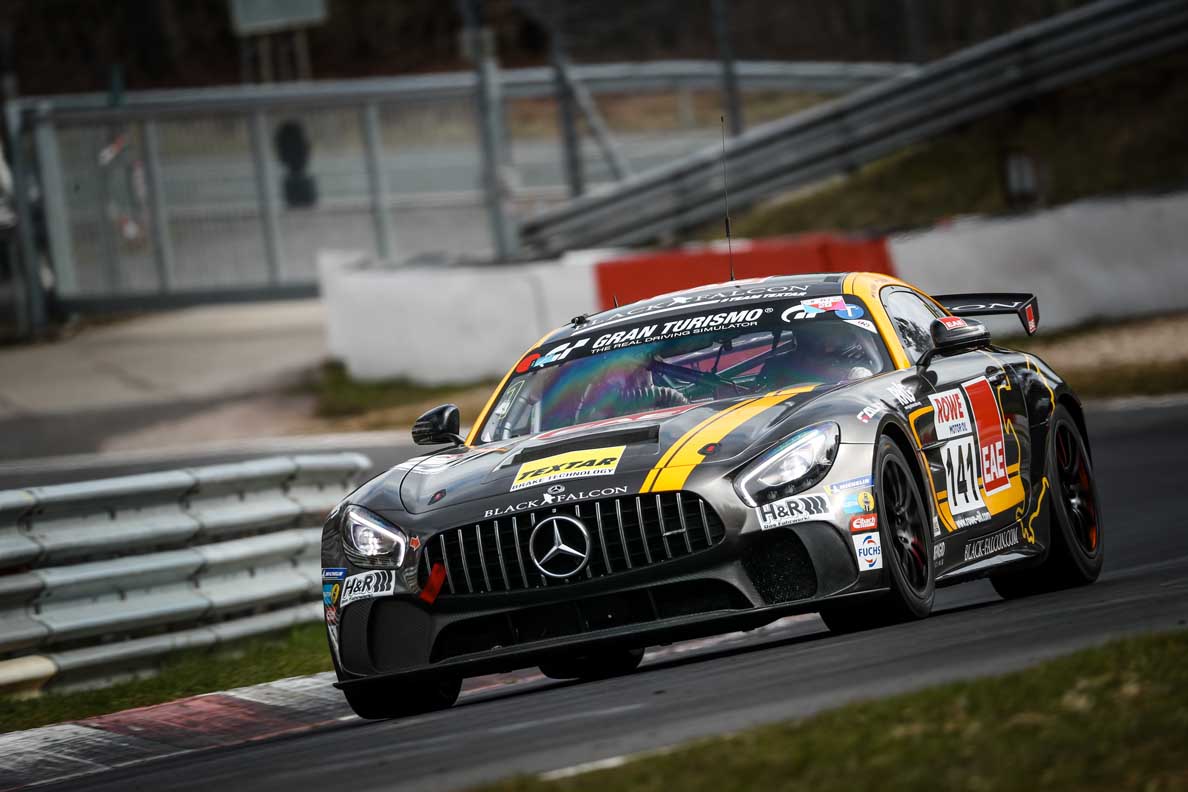 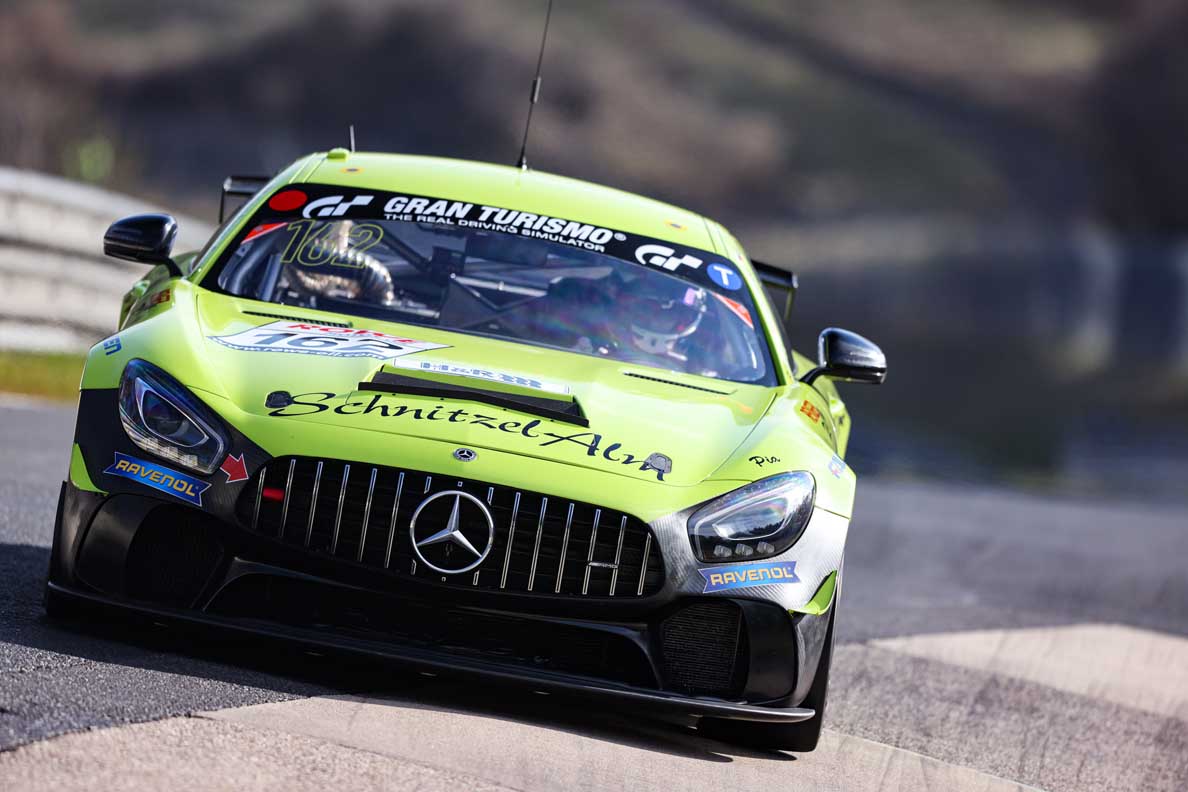 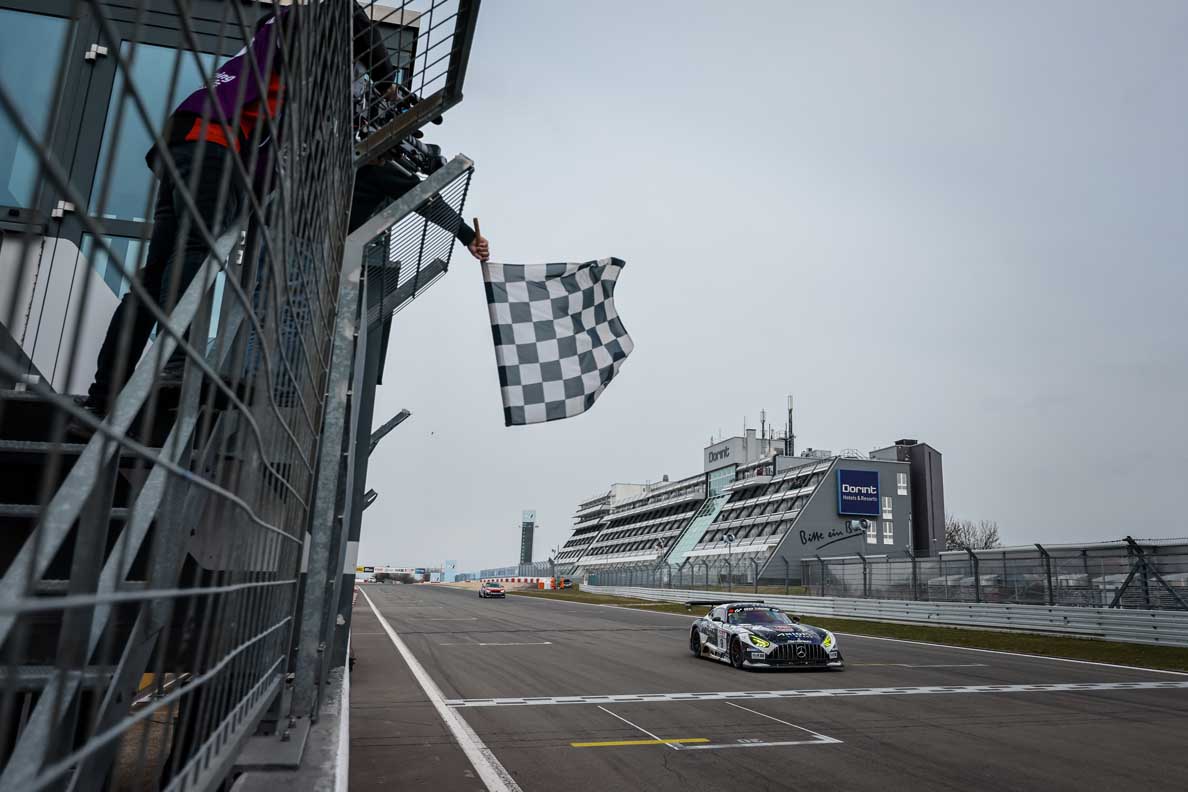 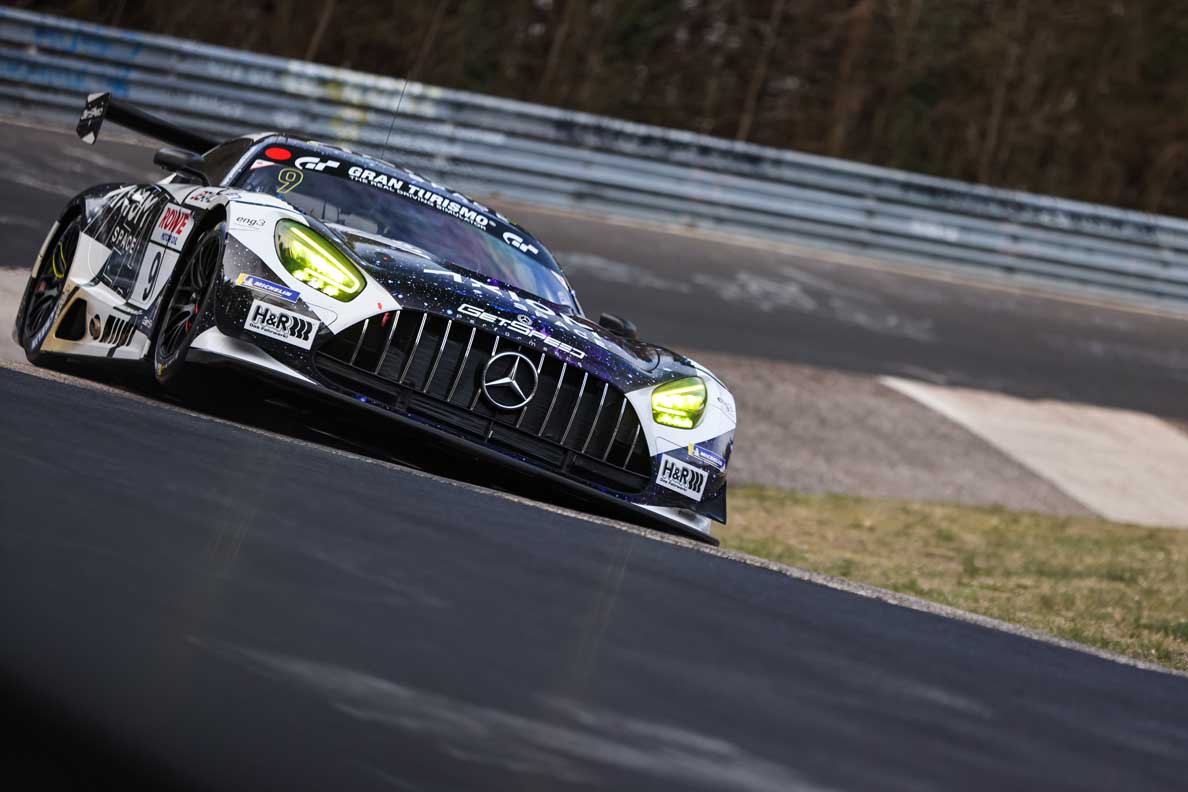