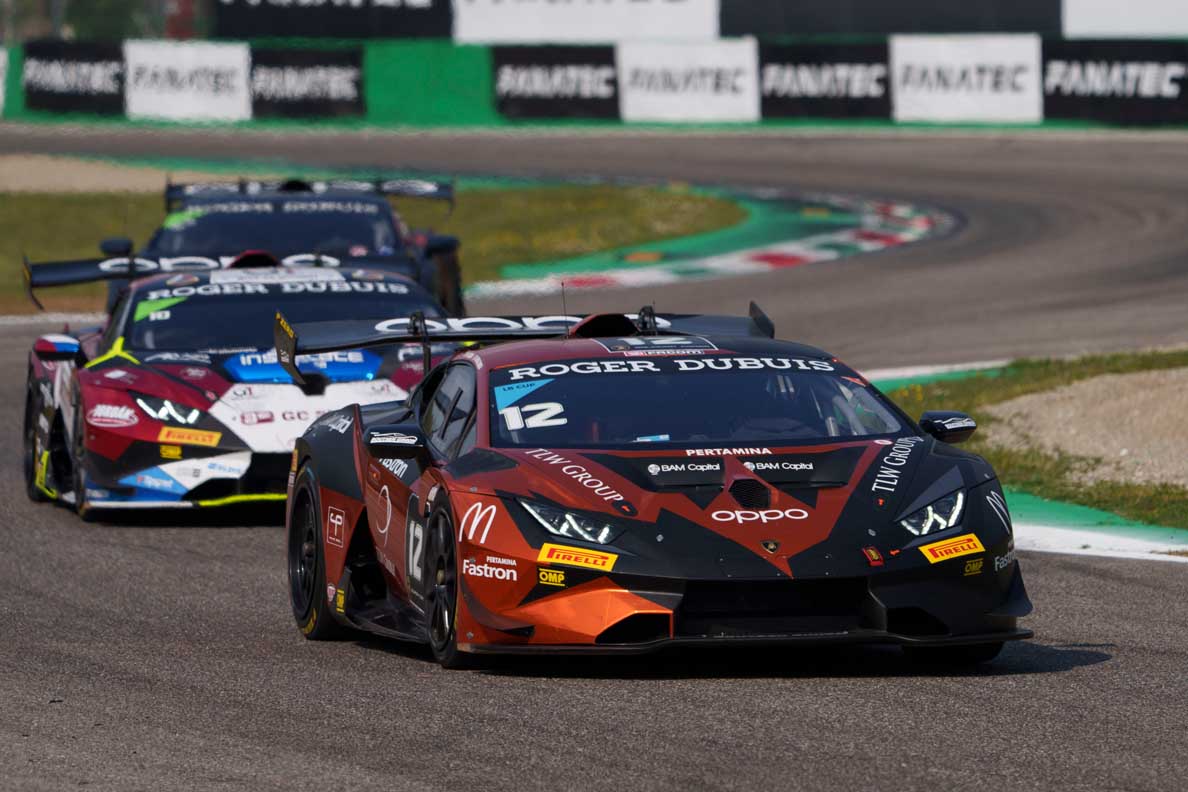 Max Weering stayed out of trouble to claim his and Johan Kraan Motorsports’ maiden Lamborghini Super Trofeo Europe race victory in what turned out to be an action-packed season opener at Monza. Weering started eighth on the grid and had been running fourth in the closing minutes but profited from tyre dramas for the three cars in front of him to come out on top. Compatriots Milan Teekens and Maxime Oosten made it a Johan Kraan Motorsport one-two with second place ahead of Leipert Motorsport’s Noah Watt and Sebastian Balthasar.

Having topped the first qualifying session of the new season, it was the Pro-Am #16 VS Racing Huracán Super Trofeo Evo of Karol Basz who led off the start, the Polish driver escaping a frenetic battle behind him into the first corner. Behind, Glenn van Berlo (#41 Target Racing) gained a place on Leonardo Pulcini (#11 Oregon Team) to take second, while the fast-starting Alberto Di Folco (#44 Imperiale Racing) was hit from behind by the #33 Bonaldi Motorsport entry of Daan Pijl.

Pijl’s race lasted a solitary lap and, while Di Folco initially carried on in third place, he too was out of the running inside the opening 10 minutes as a flat rear-left tyre forced the experienced Italian into the pits. The field then settled into a rhythm during the first stint, with Basz extending his lead over van Berlo to three seconds, while Pulcini attempted to keep up in third. Target Racing’s Raffaele Giannoni maintained his Am lead from pole position ahead of Gerhard Watzinger (Leipert Motorsport), while Boutsen Ginion’s Pierre Feligioni held a comfortable margin over Hans Fabri (Imperiale Racing) in Lamborghini Cup.

Basz and team-mate Andrzej Lewandowski maintained their lead either side of the pit window, but a mistake at the first chicane for the latter allowed van Berlo’s team-mate Raúl Guzman to close up and hit the front with 15 minutes remaining. Guzman began to extend his margin over Lewandowski, who started to fall into the clutches of Kevin Gilardoni, but was then forced into retirement after an apparent tyre problem.

Now back in the lead, Lewandowski looked like picking up an overall victory for the first time, but his hopes were dashed after he too suffered a puncture between the second Lesmo and the Ascari chicane. Gilardoni, who stood to inherit the lead, had also pulled off on the main straight with a puncture.

That left Weering in a surprise lead, and the Dutchman carefully stroked his #61 Huracán Super Trofeo Evo through the final lap to take his first win, just three-tenths of a second ahead of Teekens and Oosten, who had started 10th on the grid. Balthasar and Watt completed the podium after a remarkable fightback through the field following a difficult first lap.

Watt had started the race but was forced to shortcut the chicane in the aftermath of the Pijl/Di Folco incident and dropped four places from his grid spot. Strong pace from the Dane and his German team-mate Balthasar meant that the pair kicked off their 2021 campaign with a third-place finish.

Race winner Max Weering (#61 Johan Kraan Motorsport) said: “I’m really happy about the win, it was really difficult for me to stay on my race pace because I had a little bit of damage in the front of the car. The car was difficult to drive as I didn’t have that much downforce, but when I was able to get some quick laps, I was able to get the first place, so I am really happy about that. Everything went quite well today, and the race pace allowed me to be [in the position] to win.”

In the Am class, the drama was just as intense, with Giannoni retiring from the lead on the very same lap as Target Racing racer Guzman. The Italian veteran had held a comfortable margin over Autovitesse’s Cedric Leimer but pulled off at the first corner. Leimer then held the lead before coming under pressure from Renaud Kuppens on the final tour. The pair went side-by-side out of the Parabolica curve, with Kuppens stealing the victory by just 0.022s and finishing an incredible eighth overall.

After Basz and Lewandowski’s penultimate-lap disappointment, Pro-Am honours went the way of Target Racing’s Andrea Cola and Dmitry Gvazava in fourth overall. They fended off the Leipert Motorsport car of Dan Wells and Oscar Lee with Oregon Team’s Gullem Pujeu Beya and Massimo Ciglia third in class. In the Lamborghini Cup class, Boutsen Ginion’s Daniel Waszczinski and Felgioni took the win ahead of Fabri and Rexal FFF Racing Team by ACM’s Luciano and Donovan Privitelio.

The second 50-minute race of the weekend is scheduled to start tomorrow at 11.50 CET and will be live streamed on the Lamborghini Squadra Corse official YouTube channel and Facebook page. 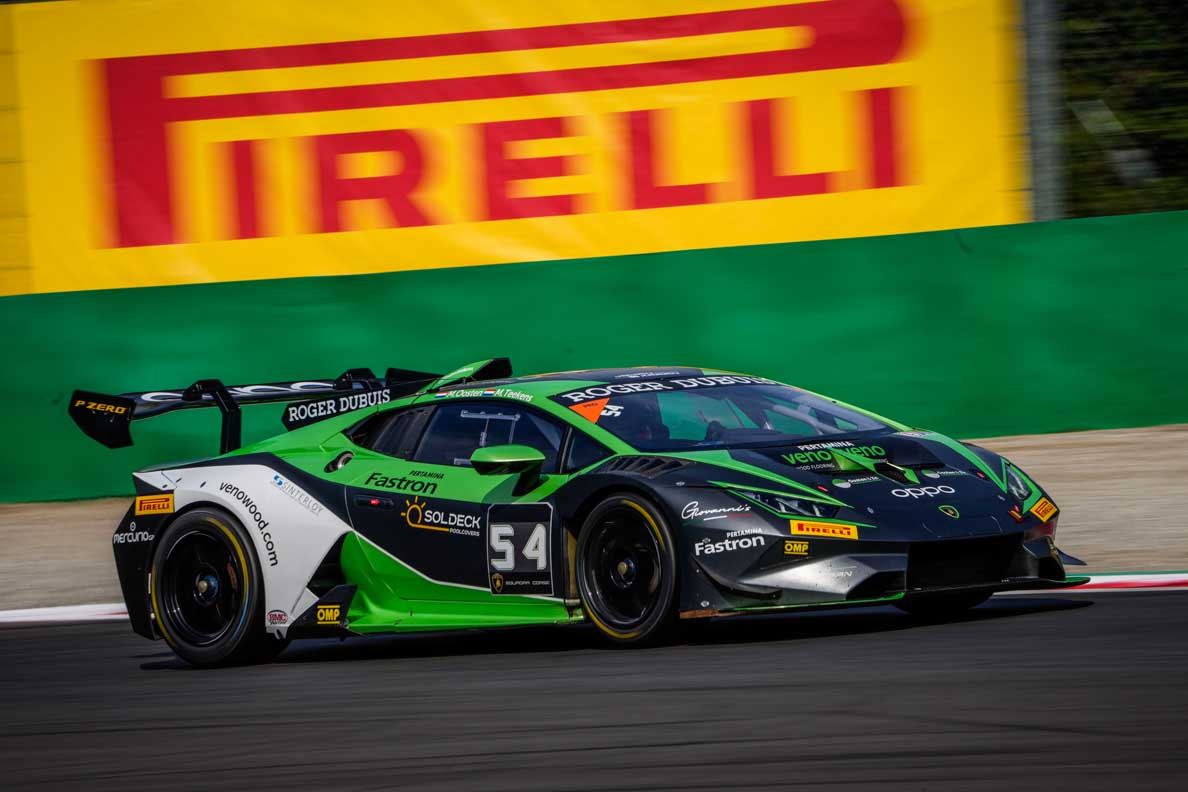 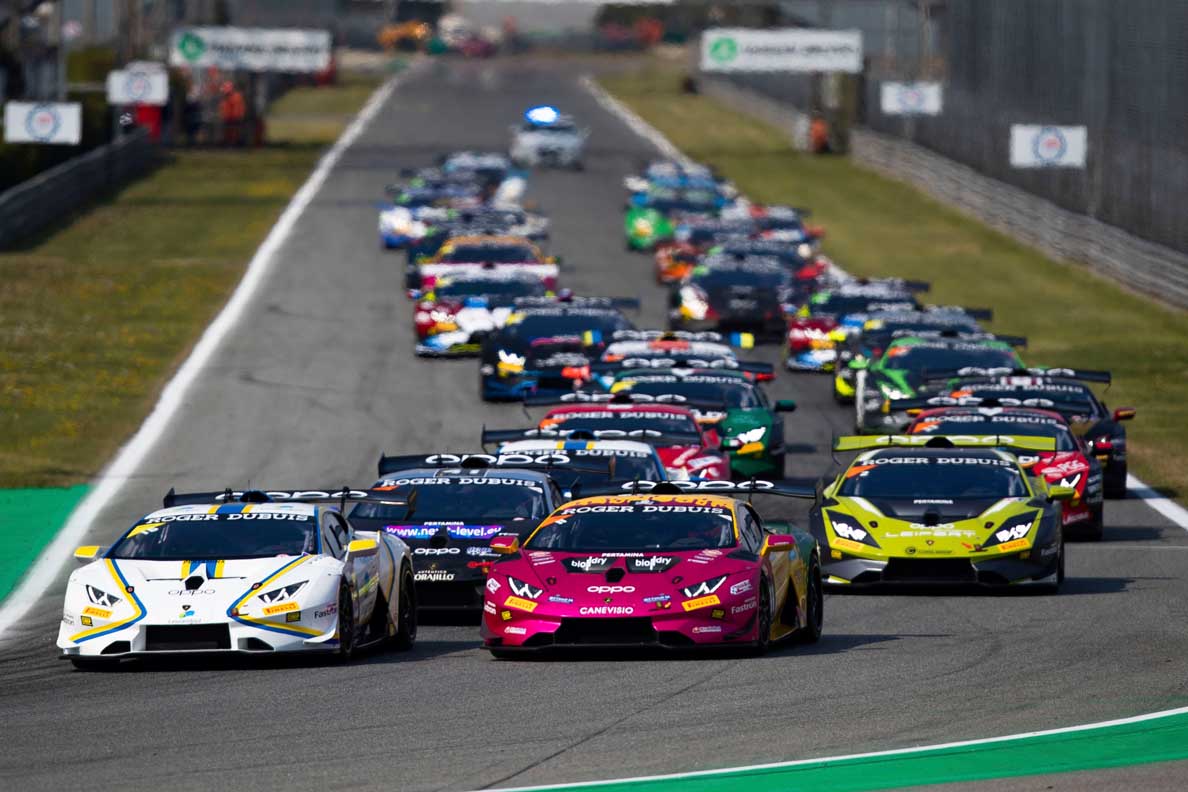 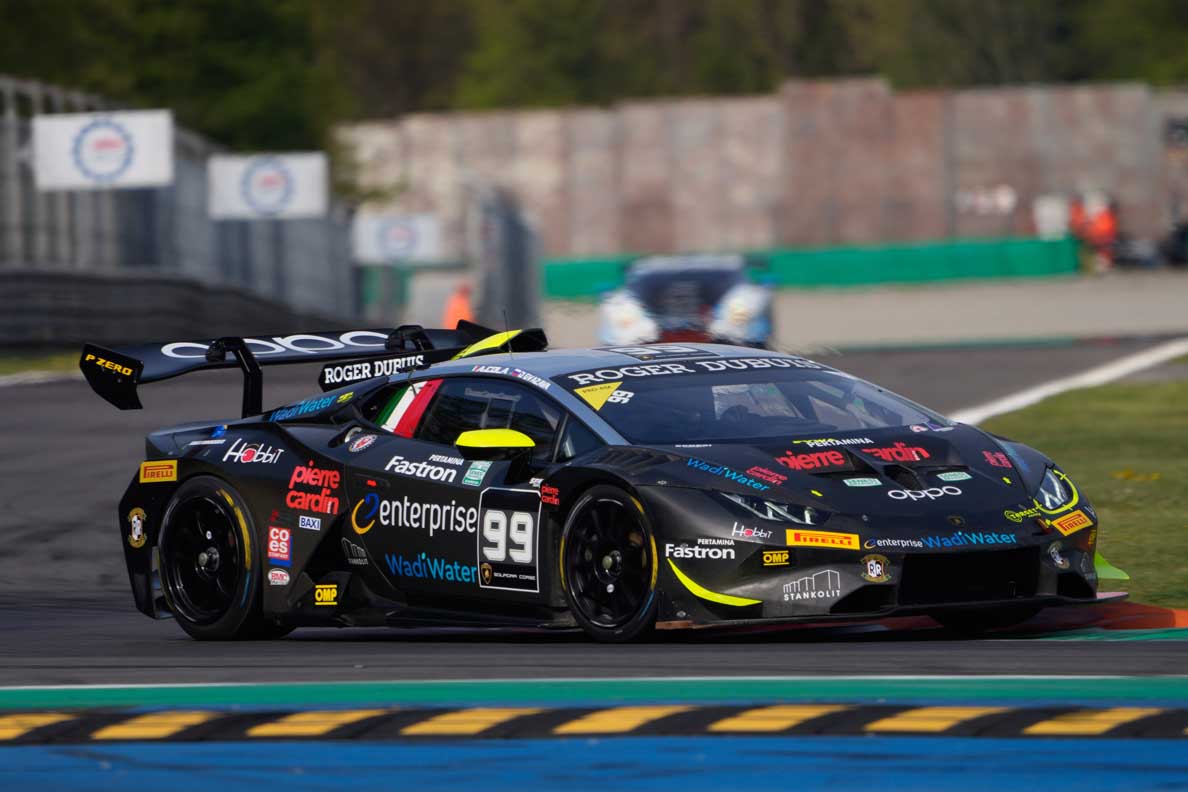 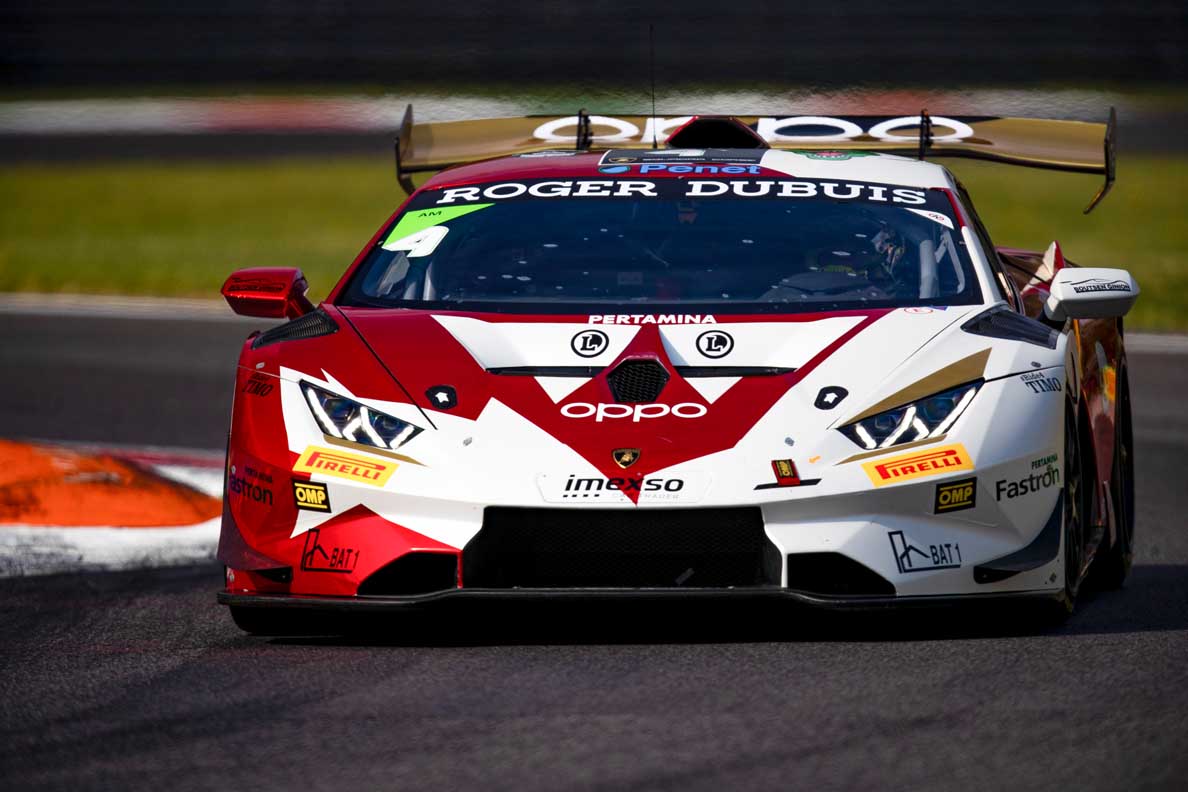 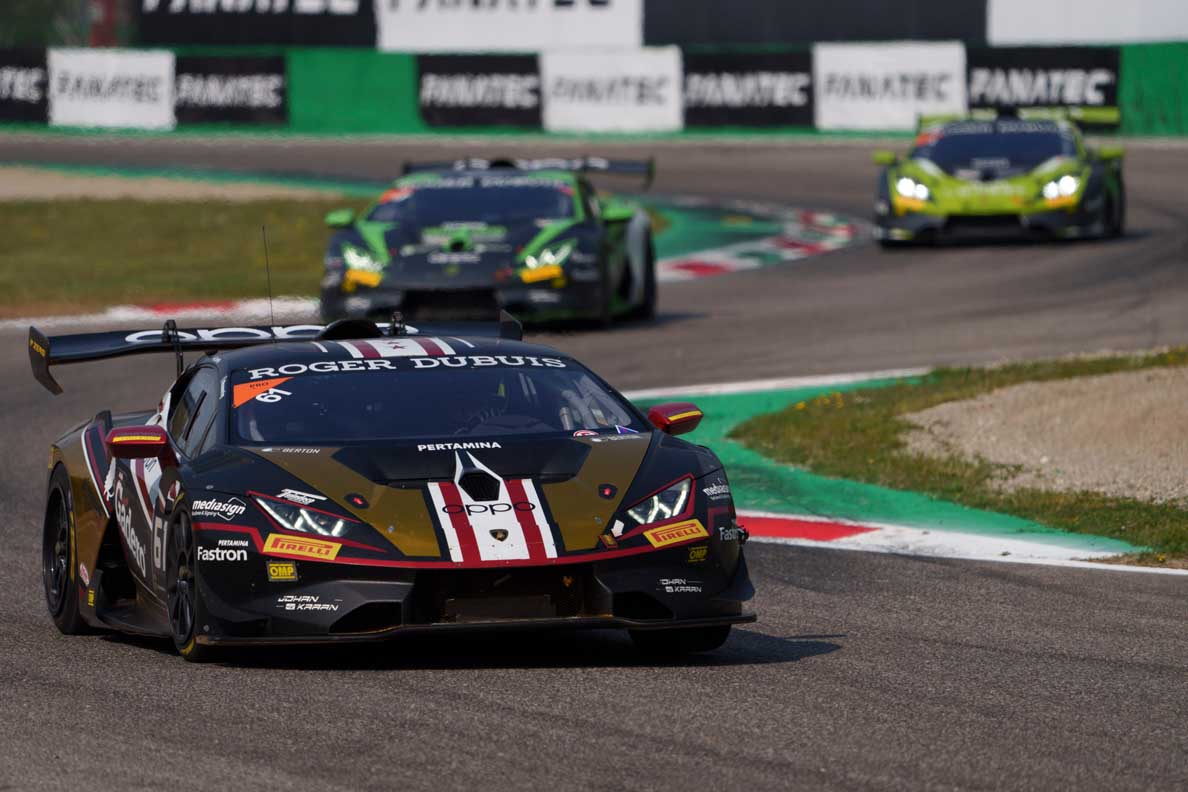