Mercedes-Amg Ends Up On The Podium In Shortened Nordschleife Thriller 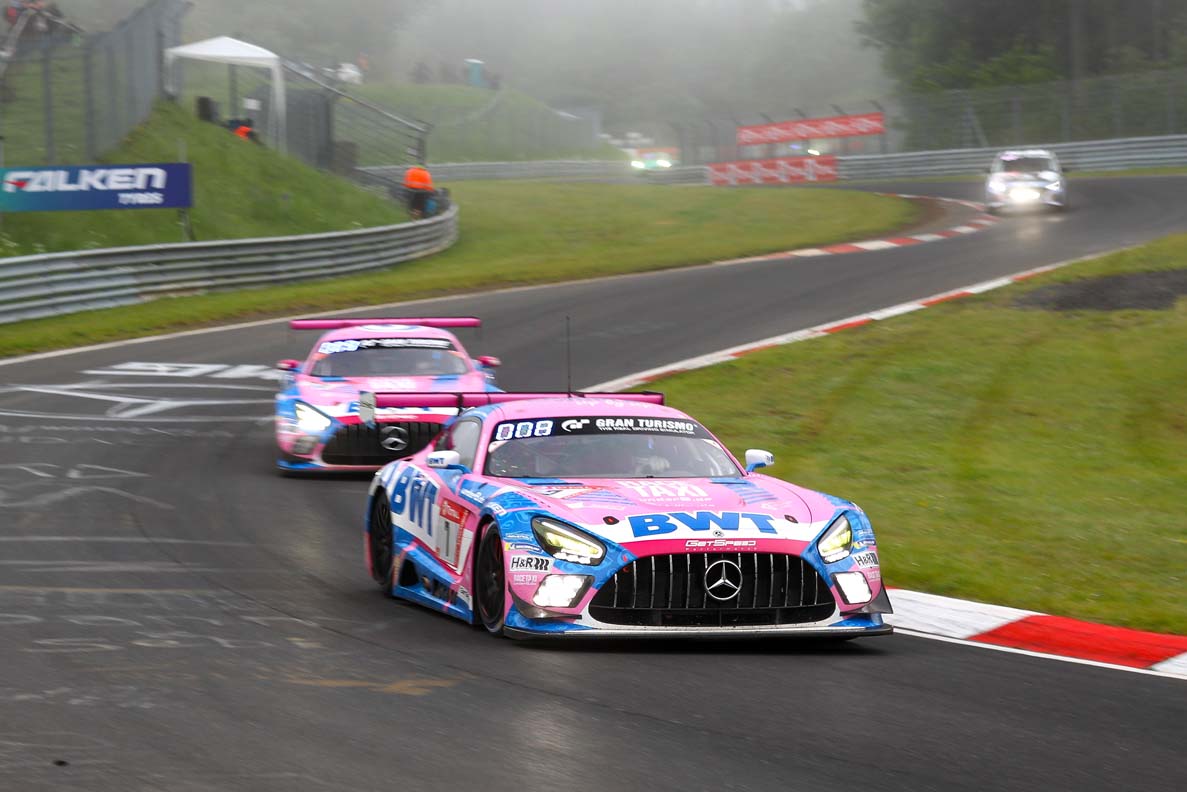 Like in the previous year, extreme weather conditions made their mark on the 49th running of the classic endurance race. In the opening stages, heavy downpours considerably mixed up the field of the favourites. From the four Mercedes-AMG GT3s that had started among the first seven, only the #4 Mercedes-AMG Team HRT car managed to maintain its position up front. The car with Adam Christodoulou (GBR), Maro Engel, Manuel Metzger and Luca Stolz (all GER) as its drivers racked up the most laps in the lead in this stage of the race. As darkness fell, the Eifel circuit got covered in thick fog, leading to an interruption of the race at 9.30pm. Until the red flag was out, four further Mercedes-AMG GT3s managed to stay on the lead lap next to the #4 car.

On Sunday morning, continuing poor visibility prevented a swift restart. Once the race resumed at noon with all the internal time gaps reduced to zero, an entertaining sprint race unfolded at a dry track. Three laps after the restart, there was an early decision to the disadvantage of Mercedes-AMG: in the sector of the Hohenrain chicane, a car that was about to be lapped tangled with Engel, who was in second place. That caused Engel to slide into the barriers – the end of the race for the #4 Mercedes-AMG GT3 that had been dominating the race for a long time. The HRT sister car with starting number 6, driven by Patrick Assenheimer, Nico Bastian, Hubert Haupt (all GER) and double starter Engel, also had to retire early. On course for a top ten finish, Haupt crashed out near the Klostertal corner and was unable to continue.

In the closing stages, things went considerably better for the two Mercedes-AMG GT3s in BWT livery. In the #7 Mercedes-AMG Team GetSpeed car, Juncadella worked his way up into third place with top-notch lap times. After a final pit stop with driver change, Marciello rejoined the race in fifth place. In the remaining 30 minutes, the Italian kept the pressure up. On the penultimate lap, the 26-year-old finally secured third place by virtue of a spirited overtaking manoeuvre and defended his position until the finish. With the #8 car, final driver Gounon brought seventh place for Mercedes-AMG Team GetSpeed home after 59 laps.

The #40 Mercedes-AMG GT3 also made significant progress: with consistently fast lap times, Dominik Baumann (AUT), Yelmer Buurman (NED), Kenneth Heyer and Thomas Jäger (both GER) moved up from 31st place on the grid to 18th position when the race was interrupted. After the restart, the quartet continued its progress to tenth place overall. Having started from P7 on Saturday, the #9 GetSpeed Performance Customer Racing GT3 lost some positions in the opening stages, but then did better as the race went on. Moritz Kranz (GER), Markus Palttala (FIN), Janine Shoffner (GBR) and Maxime Soulet (BEL) concluded their participation at the Nordschleife in 14th place overall. As a result, the quartet was classified in fourth place among the Pro-Am teams of the SP9 top class. Sixth place in Pro-Am and 19th place overall was an equally strong result for Charles Espenlaub, Joe Foster, Shane Lewis and Charles Putman (all USA) with the #16 CP Racing Mercedes-AMG GT3.

In the SP-X class for special cars, Philip Ellis (SUI), Dominik Farnbacher, Tim Scheerbarth (both GER) and Darren Turner (GBR) from the Space Drive Racing team put in a solid performance: the #25 Mercedes-AMG GT3, equipped with a novel steer-by-wire technology, finished the race in 16th place overall as the best-placed car in the SP-X category. In SP8T, two Mercedes-AMG GT4s staged a duel for victory: after 54 laps, the #36 BLACK FALCON Team TEXTAR car came out on top and demoted the #37 Schnitzelalm Racing entry to second place in cass. In SP10, the Schnitzelalm Racing sister car, the #34 Mercedes-AMG GT4 driven by Marek Böckmann, Marcel Marchewicz, Tim Neuser and Reinhold Renger (all GER) secured victory.

Christoph Sagemüller, head of Mercedes-AMG Motorsport: “Once again, the 24-hour race lived up to its reputation. Even though it lasted only 9.5 hours, it couldn’t have been more exciting. Too bad, of course, that we didn’t make it quite to victory. Still, I think that we have put on a very good show for our AMG fans. The car with starting number 6 in the colours of the skateboard and street wear brand Palace was one of the highlights of this year’s 24-hour race, both in sporting and in visual terms. And our new partnership with BWT also bore its first fruit in the Eifel as well. Thanks to a fantastic final spurt, Raffaele Marciello still managed to bring the car with starting number 7 onto the podium. I would like to thank all our partners, teams and drivers for their great commitment in this extraordinary race.”

Stefan Wendl, head of Mercedes-AMG Customer Racing: “Congratulations to Porsche and the Manthey team. Strategically, they executed it well in a race that was pretty much disjointed and at the end of the day also had that little bit of luck. After the weather conditions and the tyre gamble cost us some time at the start of the race, the GetSpeed team still managed to make it onto the podium with a fantastic recovery in the closing stages. That feels like a win. Of course, it is a pity for the HRT team that lost both of its cars in accidents in the battle for a possible win. Unfortunately, things like that can happen in such a tough race. Ultimately, we were lacking some race distance to showcase the endurance qualities of our Mercedes-AMG GT3 in an even better way. Nevertheless, a good AMG result rounded out by the dominant class wins by Schnitzelalm Racing (SP10) and Black Falcon (SP8T).”

Raffaele Marciello, Mercedes-AMG Team GetSpeed #7: “Third place is a good result, but it isn’t a victory. That was our goal and therefore we can’t be 100 percent satisfied. We were well down due to a wrong tyre choice at the beginning of the race. The red flag helped us. In comparison, we weren’t fast enough in every stage, so we have to continue to work hard and do better next year.”

Daniel Juncadella, Mercedes-AMG Team GetSpeed #7: “Such a podium result in the 24-hour race at the Nürburgring is always a nice thing. But as a driver, you want to win, of course. We tried everything and pushed really hard once more at the end. After the restart, it really was just a sprint race and for that, perhaps we slightly lacked some top speed. At the end, Raffaele secured the podium finish for us with fantastic manoeuvres, that was simply unbelievable!”

Jules Gounon, Mercedes-AMG Team GetSpeed #8: “In the final two stints, we had bad luck with the traffic, sadly. As a result, we were no longer in contention for a top three result. At the end of the day, seventh place is okay. The podium for the #7 sister car is a great overall result for Mercedes-AMG and a nice reward for the hard work by GetSpeed. Many thanks to the entire team and to AMG for a great car!”

Dominik Baumann, 10Q Racing Team #40: “Tenth place is a good result for us in the end. Yesterday, we had to deal with a lot of understeer in the car. Only once it got colder, the place was okay. Today, it was great fun. Traffic was less, I finished with a double stint and we were then able to move up from 18th to tenth place, also because some cars in front of us retired. There were many difficult situations, but there is hardly a scratch on the car. The team is super happy, we haven’t made any mistakes on the track or in the pits and didn’t have any technical problems either.”

Maro Engel, Mercedes-AMG Team HRT #4 and #6: “Retirement with the #4 car while in P2 is maximum disappointment, obviously. The car was running really well. The guys from the team had achieved a perfect set-up for the Mercedes-AMG GT3 and we were ready to battle for victory. About the accident situation: I wanted to lap a slower car on the outside and assumed that the driver had seen me. Unfortunately, I had misjudged it because he suddenly turned in and hit me on the rear wheel, so that I spun out under braking and I couldn’t avoid the impact. I am really sorry for Mercedes-AMG, Haupt Racing Team and my teammates.” 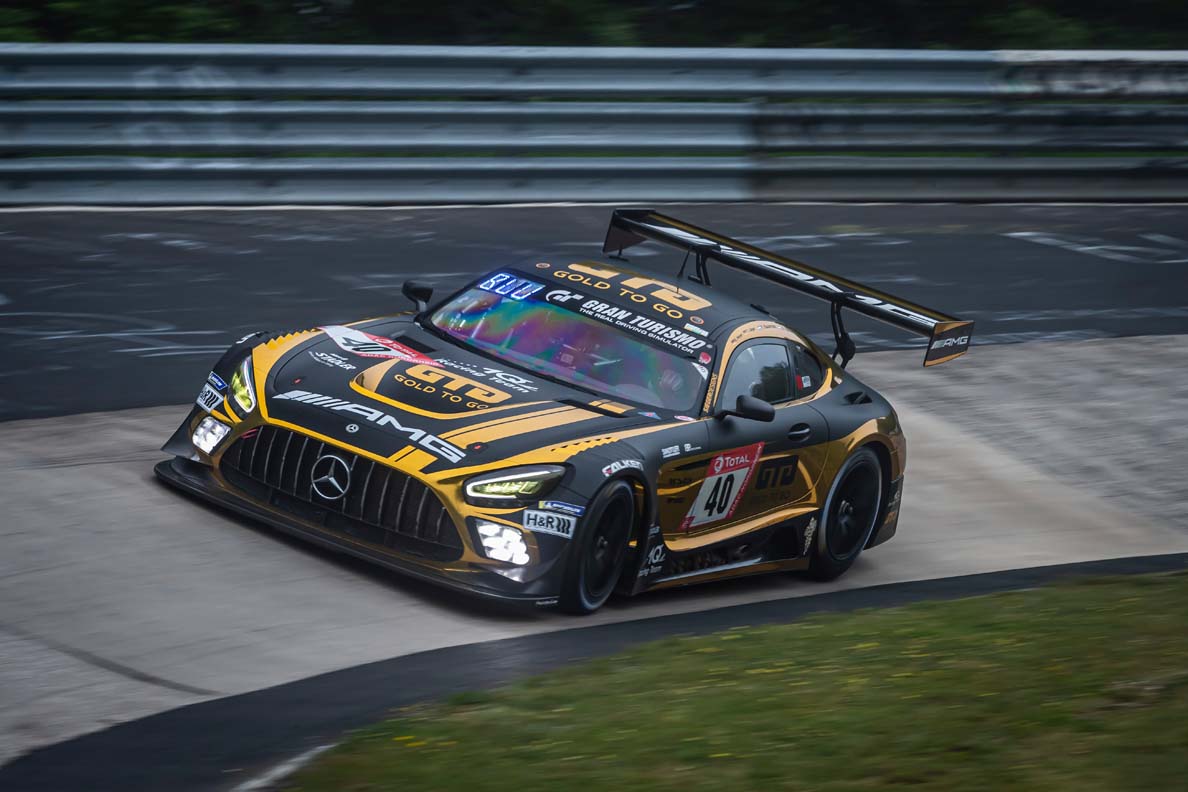 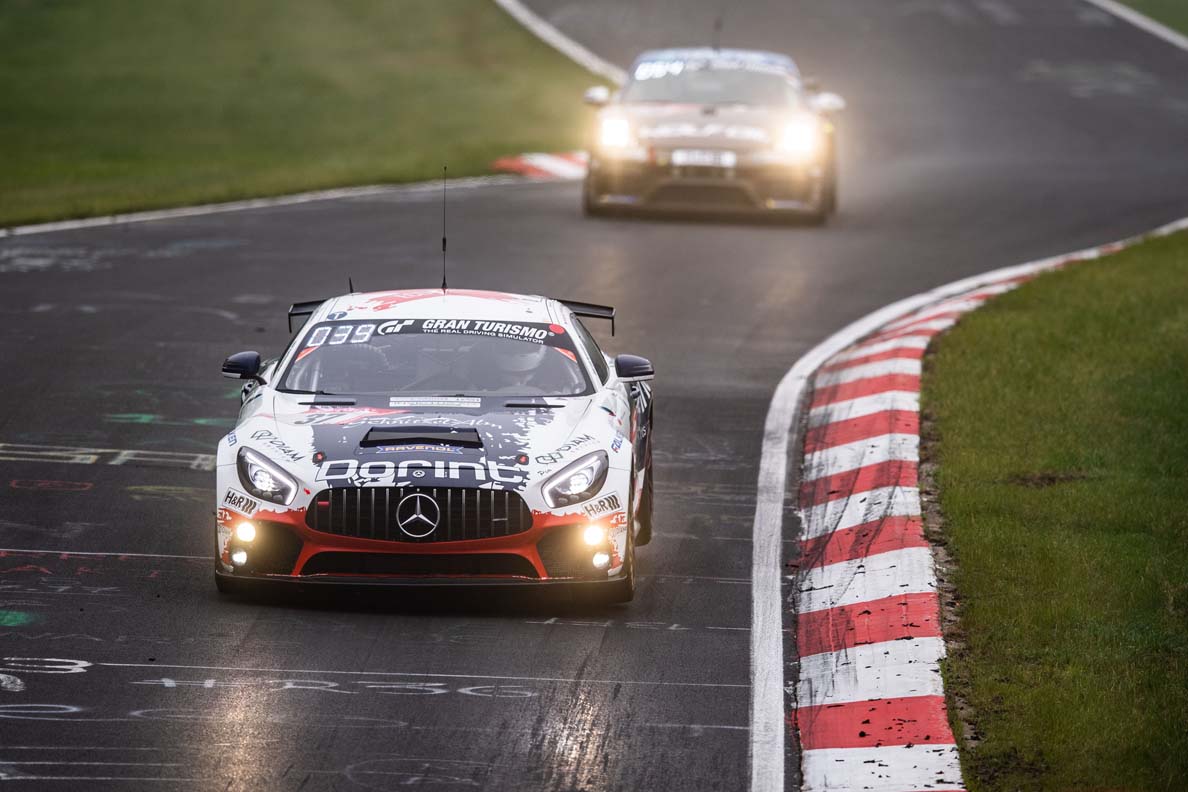 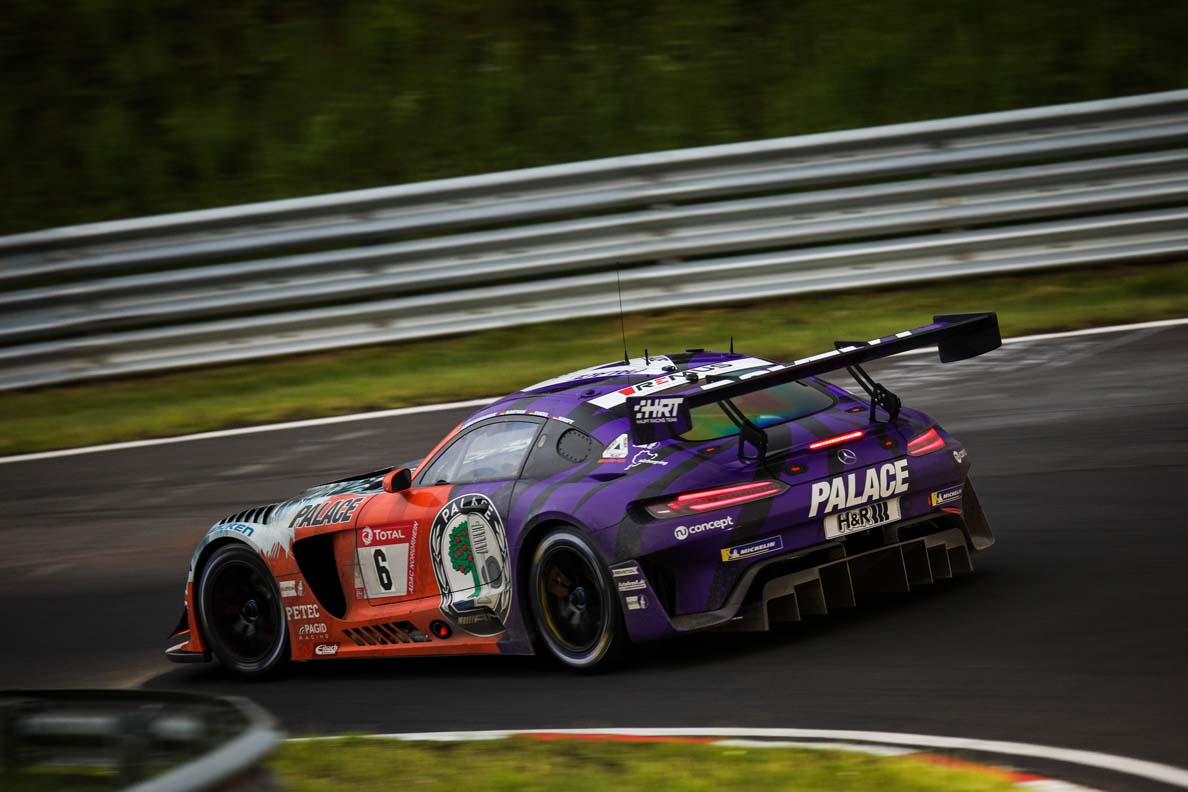 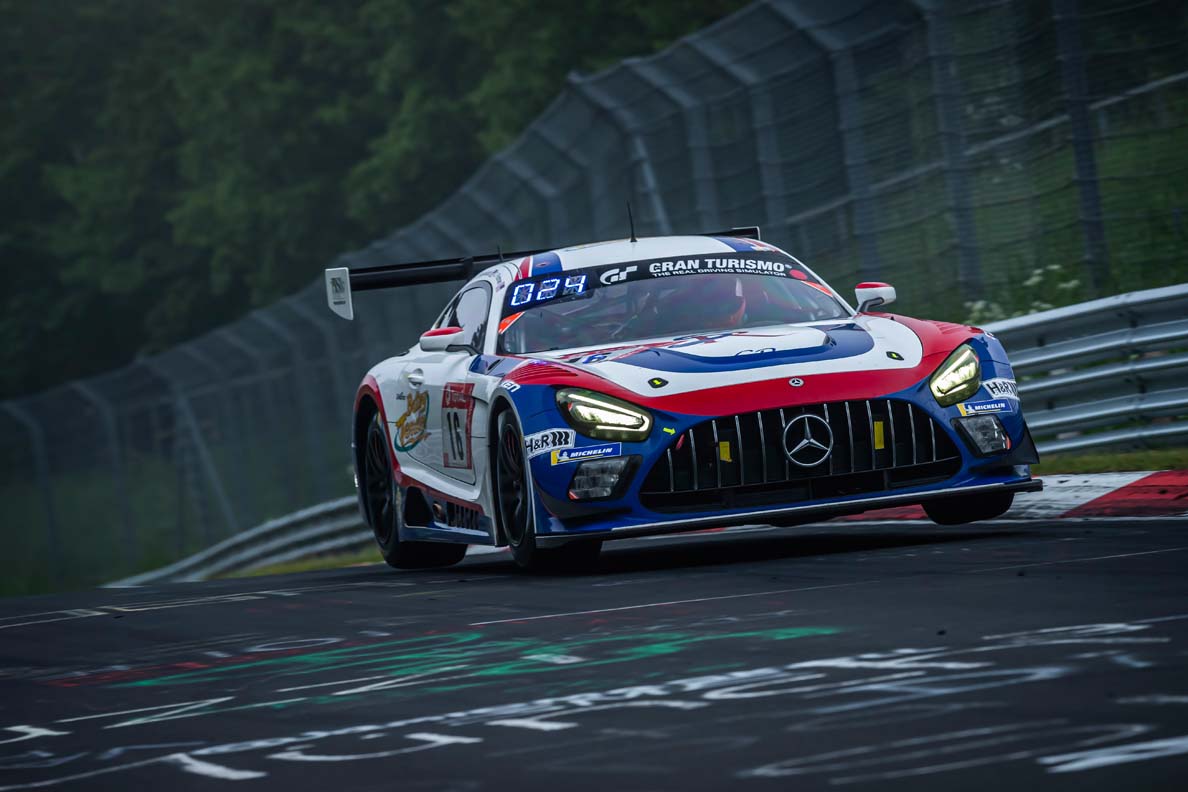 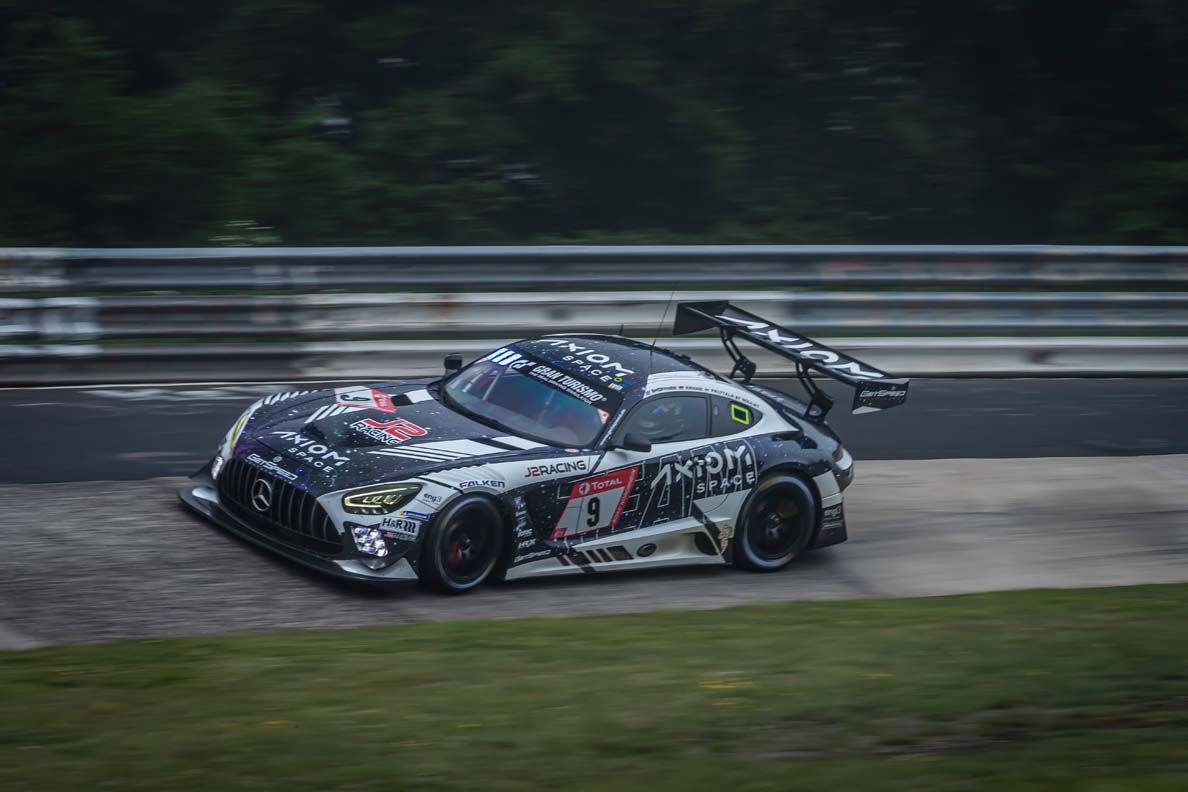 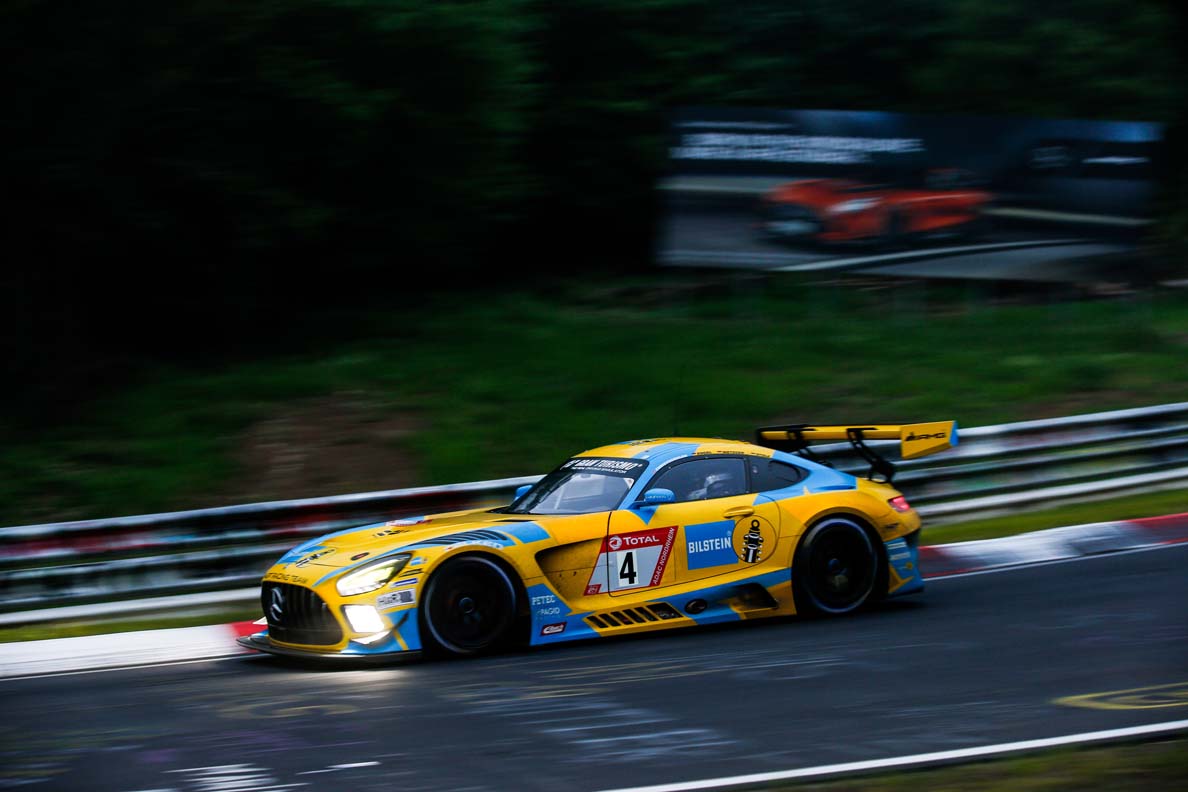 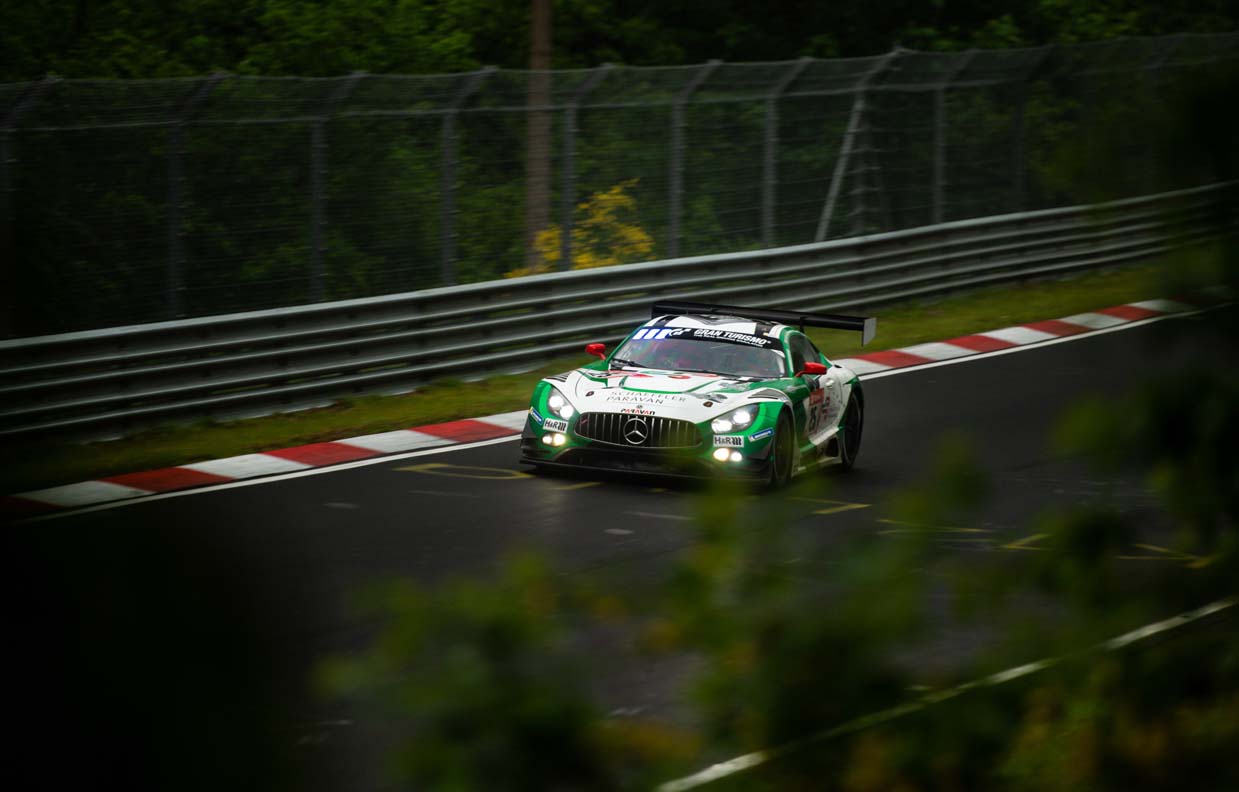 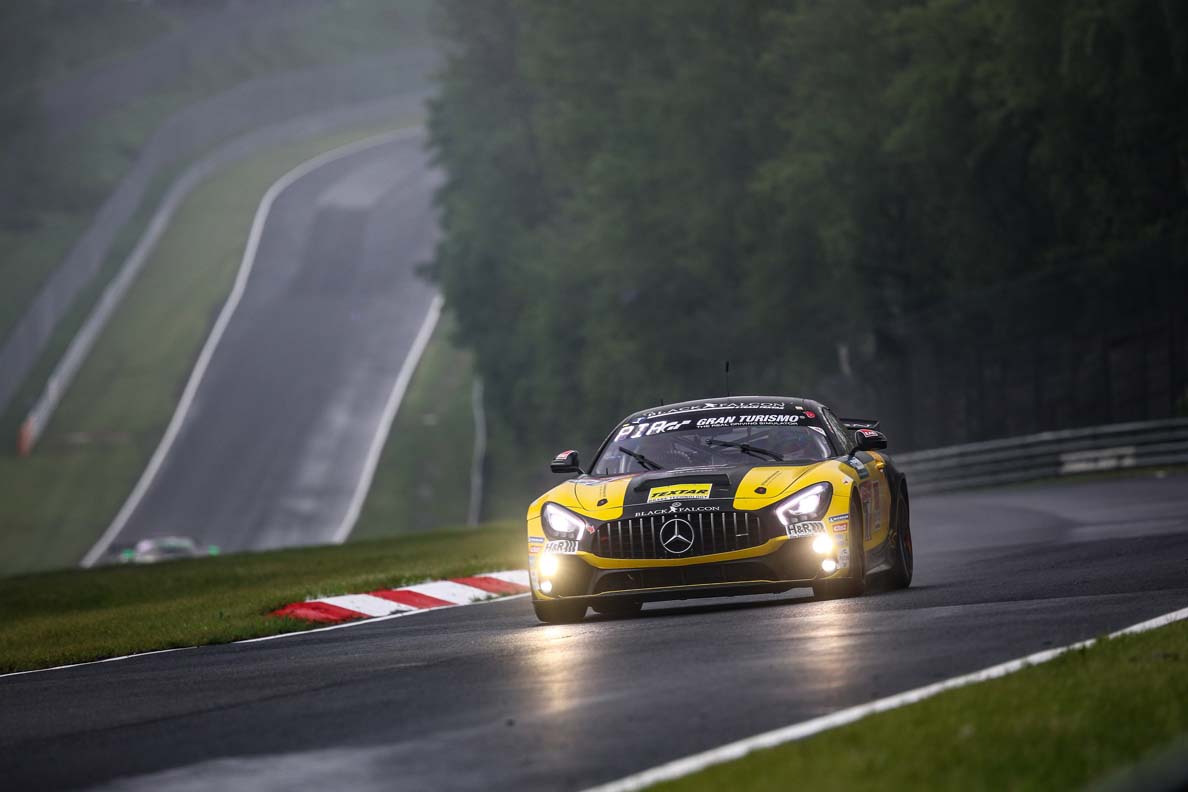 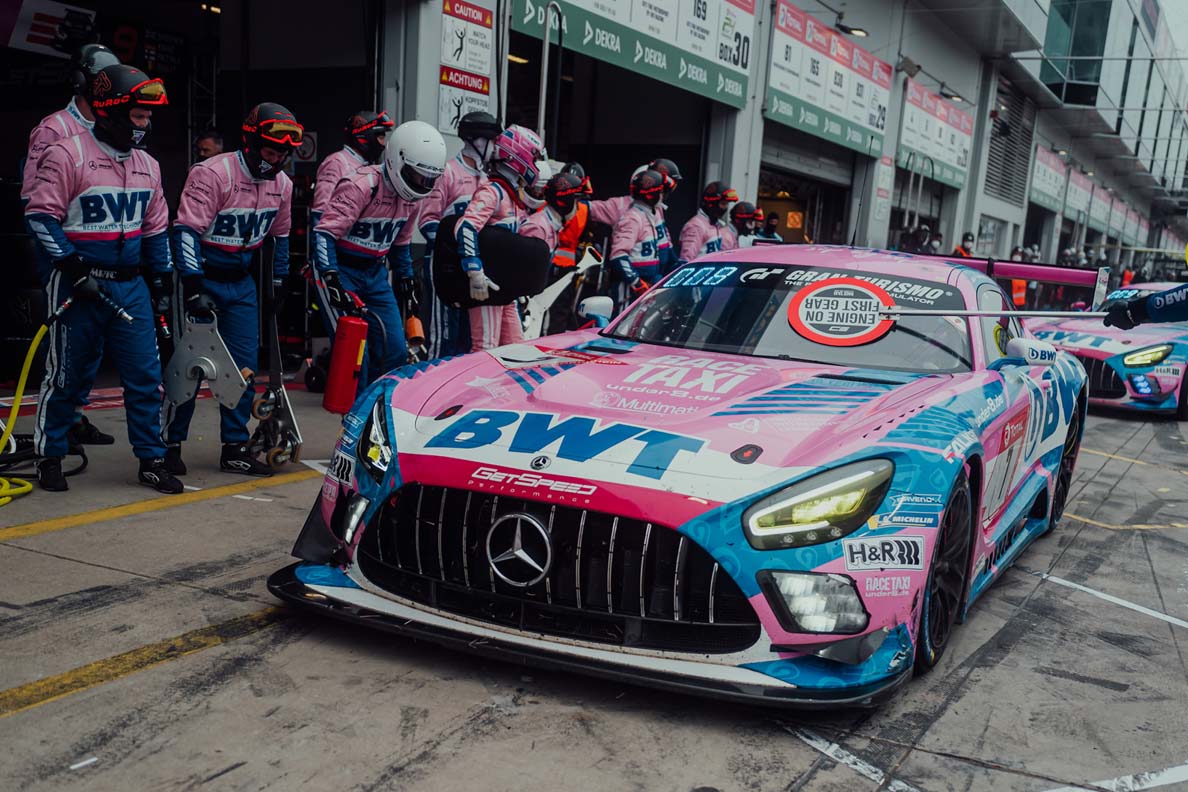 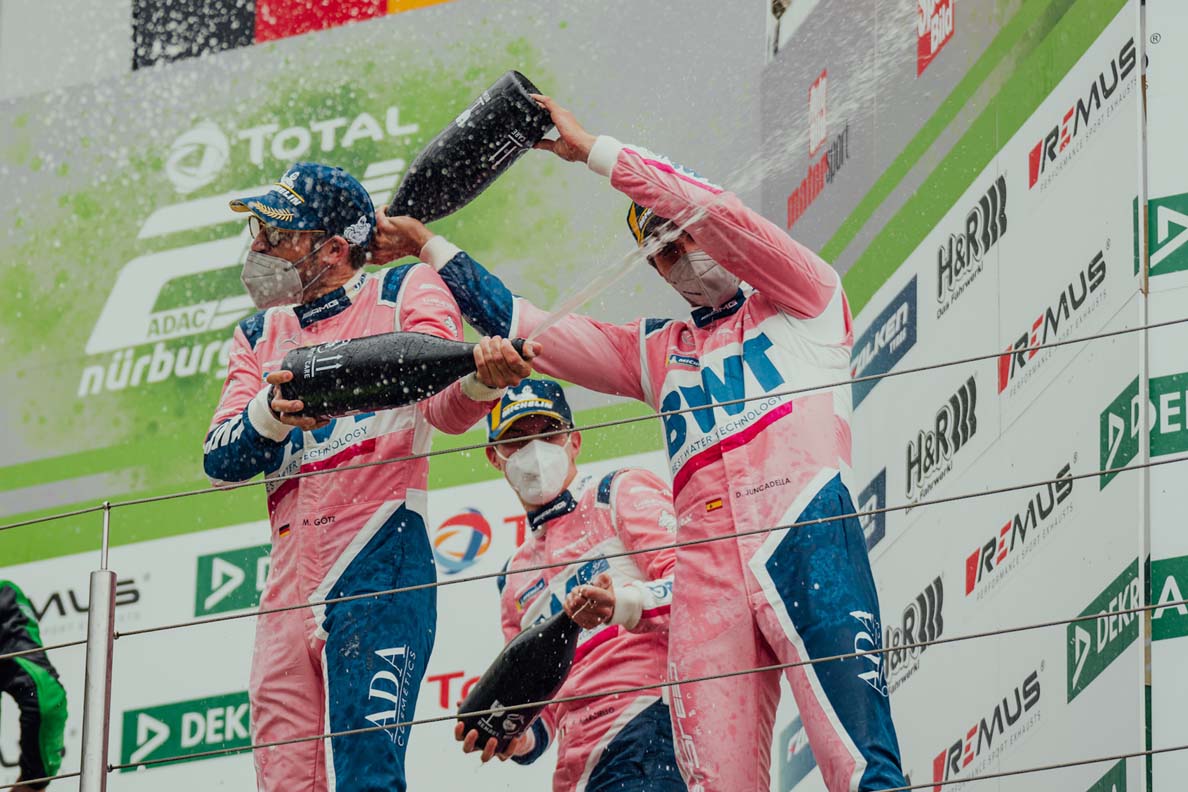 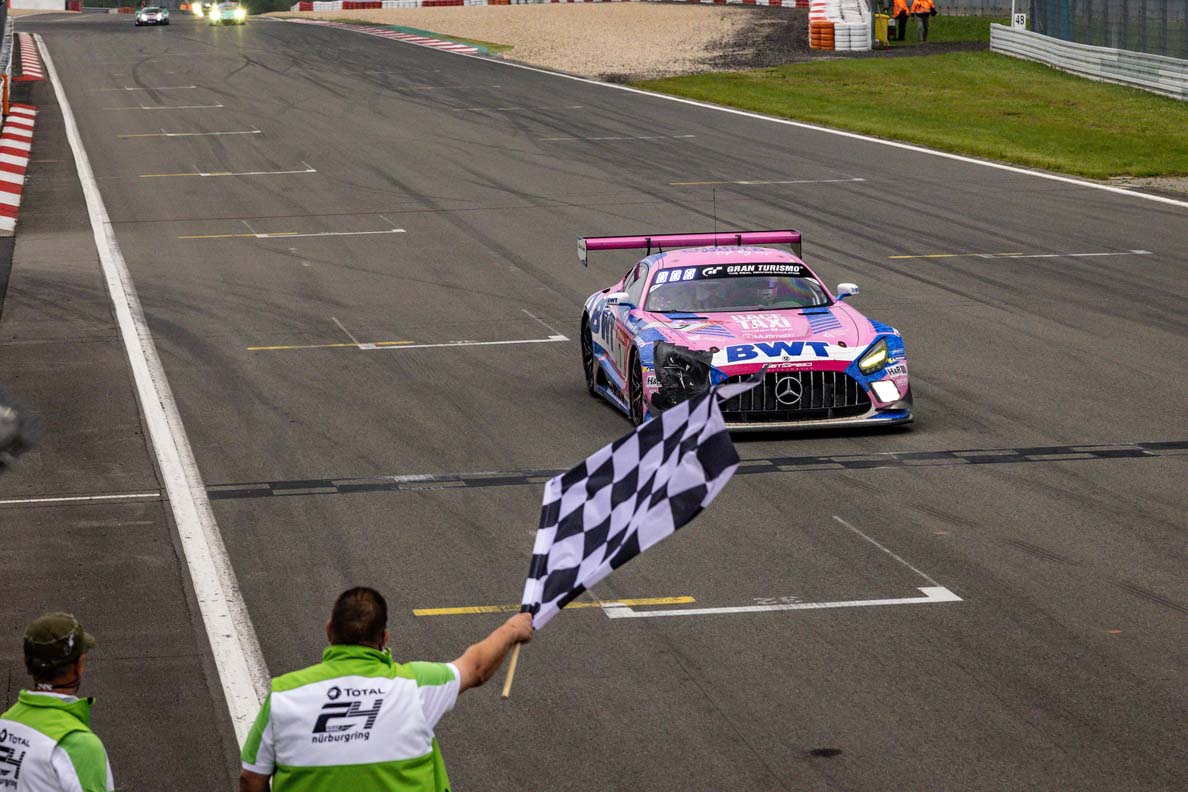 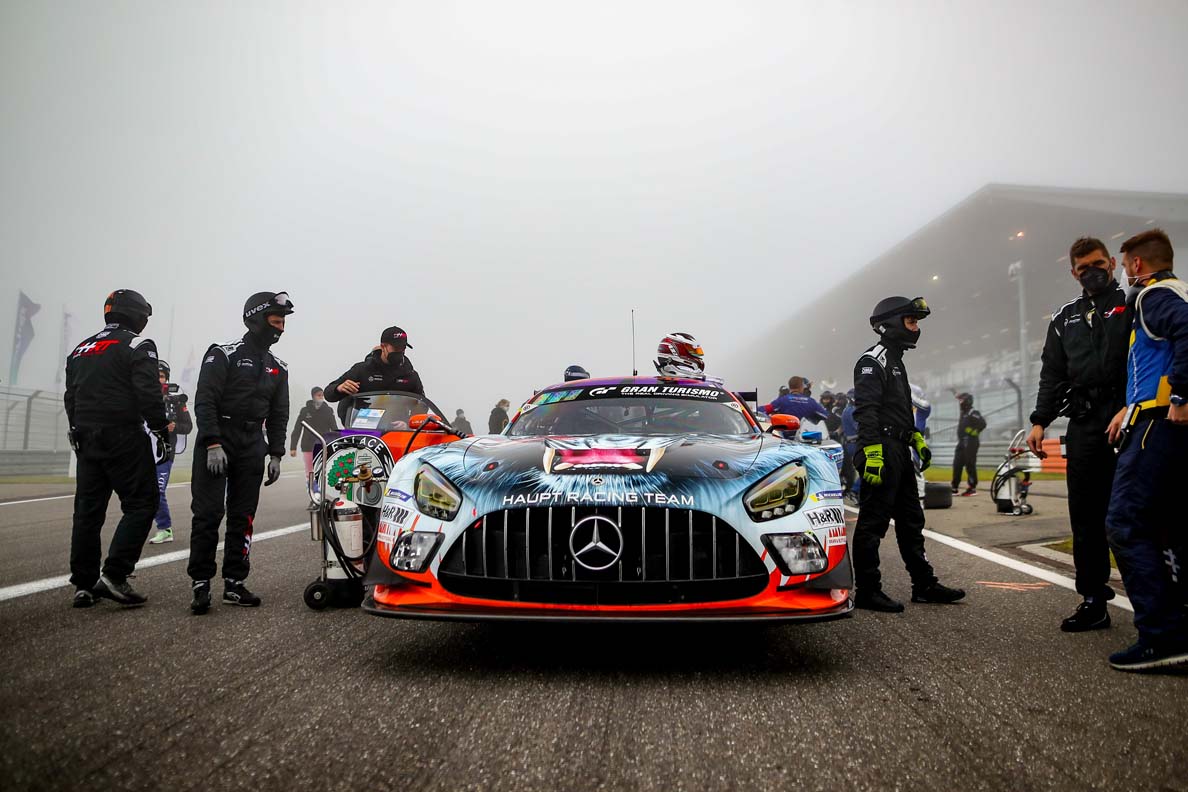 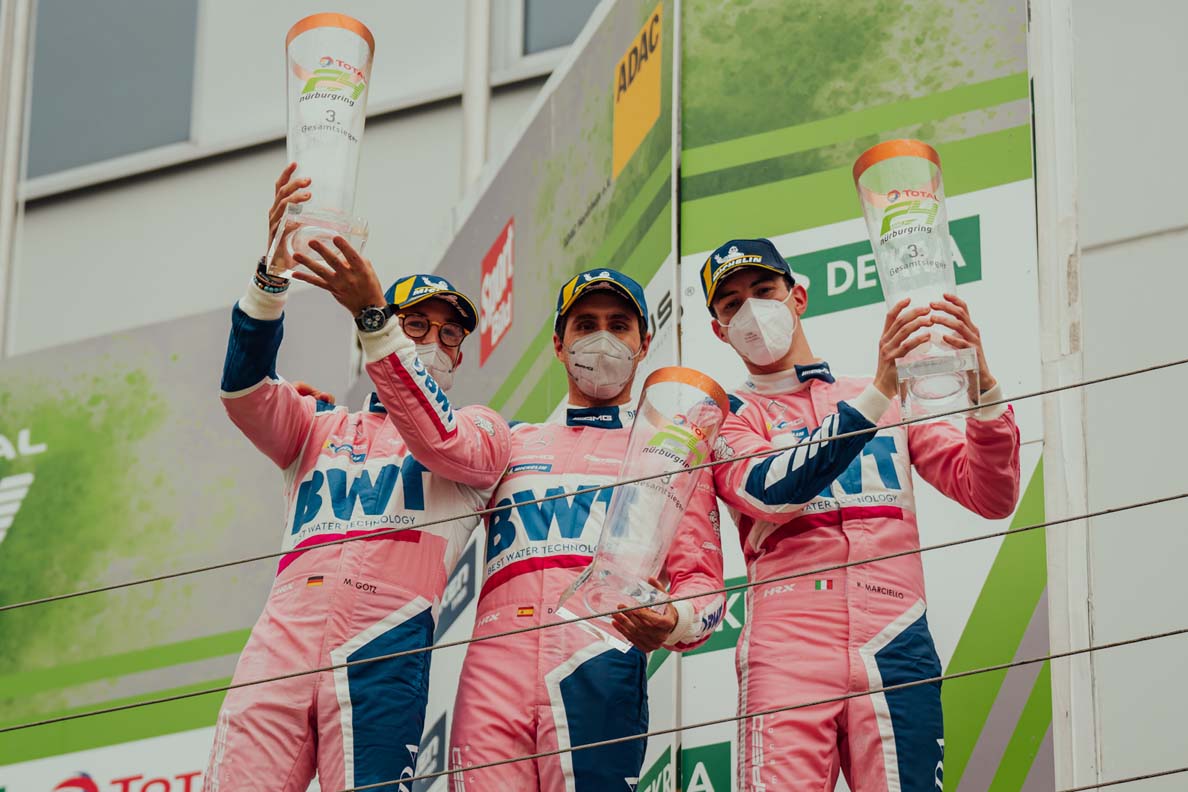 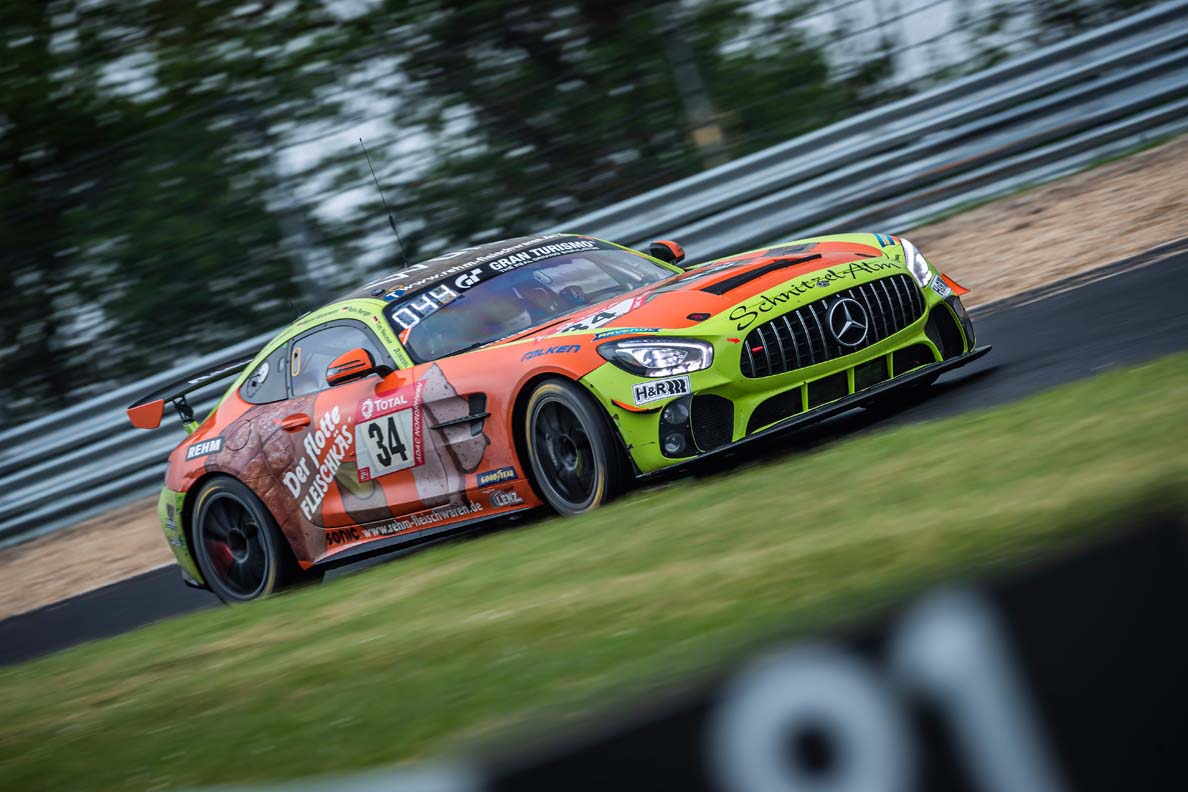 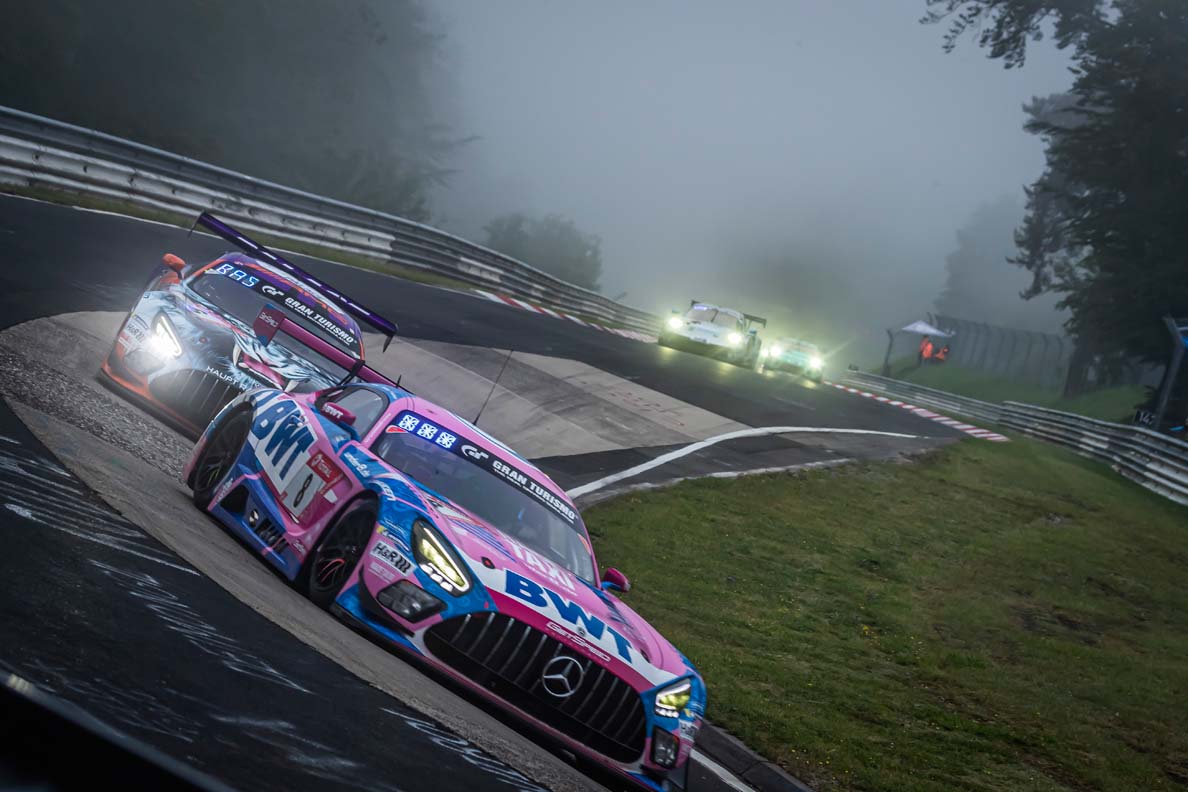