WRC – Rovanperä Edges Ahead Of Evans In Estonia 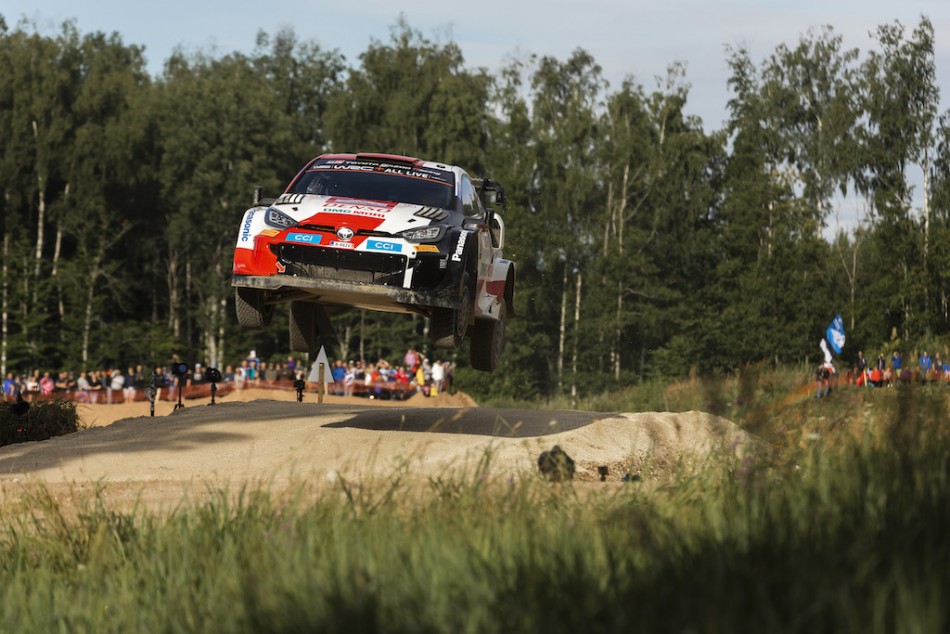 Kalle Rovanperä has almost doubled his Rally Estonia lead over team-mate Elfyn Evans on Saturday morning with a hat-trick of fastest times alongside co-driver Jonne Halttunen.

The Finn, who snatched top spot from Evans on Friday evening’s rain-soaked finale, conceded a few tenths on Saturday’s short opening speed test at Elva before punching in a terrific treble to stretch his advantage to 19.1s.

Driving a Toyota GR Yaris Rally1, 21-year-old Rovanperä admitted he was caught napping in Elva before getting his game together for the next three stages.

“I had a really bad stage, I was losing seconds everywhere and wasn’t happy with my run at all,” he explained. “I was not so awake as I normally am and not where I wanted to be but the last two stages were nice.

“We changed something on the car and it got better. We just tried to gain a bit more grip from the car and it seemed to work in a few places quite well.”

Sporadic showers mixed with sunshine offered inconsistent grip across the quartet of stages and Evans confessed he was too hesitant in places to match Rovanperä.

“I need to be a bit more consistently fast this afternoon,” he said. “We know here it’s very difficult to make a big advantage so it’s even more important not to give any time away.”

Ott Tänak had a consistent and trouble-free morning to retain third, 38.5s behind Evans. The Estonian, who scored three top three times, fine-tuned his Hyundai i20 N Rally1’s brake settings en route after a rush to complete the job list in this morning’s 15-minute service.

He’s followed by team-mate Thierry Neuville, 52.5s adrift, in fourth after Esapekka Lappi stopped to change a damaged tyre in Otepää after a heavy landing and dropped 2m30s. Lappi’s woes were compounded when the jack in his GR Yaris failed to work.

Neuville carried a smile all morning as his confidence improved and the Belgian has more than a minute in hand over Takamoto Katsuta. The Japanese GR Yaris pilot clawed his way past Adrien Fourmaux to return to service 6.3s clear of the Ford Puma Rally1 man.

Lappi is a minute adrift of Fourmaux and almost 55s clear of Pierre-Louis Loubet’s Puma in eighth. Loubet demoted team-mate Gus Greensmith, who also changed a wheel in Otepää after a heavy sideways landing damaged the tyre.

Oliver Solberg’s troubles continued when the Swede stopped in Otepää to clear grass wedged in the radiator grille of his i20 N as the engine temperature soared.

Not even a damaged tyre nearing the finish of SS13 could knock Andreas Mikkelsen off his stride with the Norwegian continuing to lead FIA WRC2 in his Toksport WRT Škoda Fabia Rally2 Evo in 10th overall. Hyundai Motorsport N’s Teemu Suninen is second, 13.9s adrift, with Mikkelsen’s team-mate Marco Bulacia third.