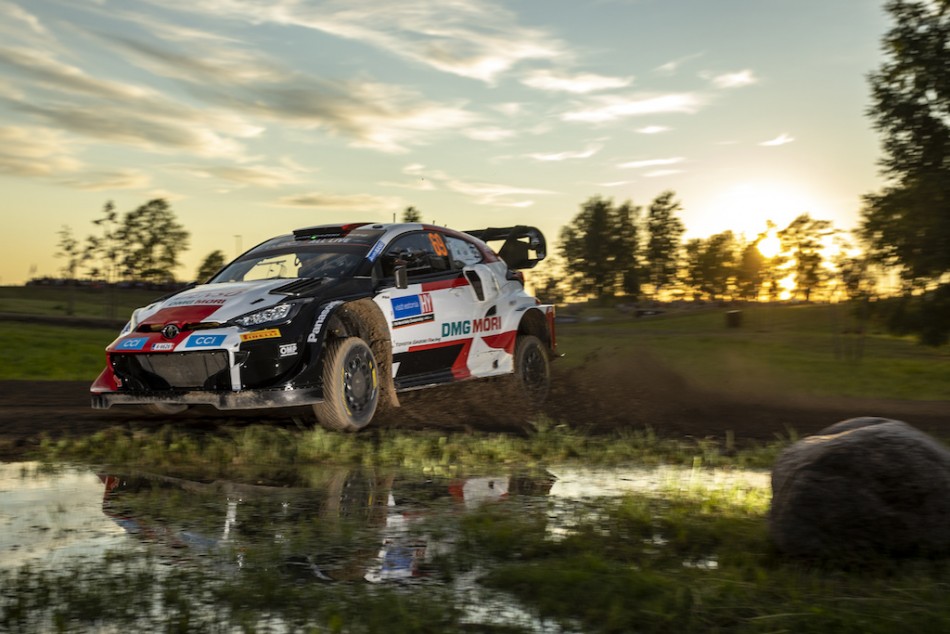 Rovanperä almost halved the deficit in the next two as intermittent showers provided a different challenge, ahead of the closing 6.70-kilometre Vastsemõisa test.

In heavy rain, road opener Rovanperä enjoyed the best of the conditions before the roads progressively deteriorated. The sandy gravel turned to mud and ruts filled with water to create treacherous driving conditions for those behind.

With Jonne Halttunen co-driving, Rovanperä charged to a third consecutive fastest time by almost 15s, while Evans slid off the slimy road into some bushes. He dropped more than 22s to the flying Finn and his lead turned into a 11.7sec deficit as result.

“I was not expecting to lead after the morning,” Rovanperä admitted. “We did a good job opening the road and also in the afternoon we had good times. Of course, the weather on the last stage was on our side, we gained when the others got the rain.”

Home hero Ott Tänak battled handling problems in his Hyundai i20 N Rally1 all day. When a heater pipe directed onto his windscreen came loose in Vastsemõisa, the glass quickly misted and he too left the road but recovered to end the day 44.3s off the lead in third.

Brake problems hindered Esapekka Lappi all morning. Despite being one of three frontrunners to go off the road at the same final stage corner, he brought his GR Yaris Rally1 to the overnight halt in fourth, 21.6s behind Tänak.

A subdued Thierry Neuville was fifth in another i20 N Rally1. The Belgian also fought handling difficulties and could not defend against Lappi this afternoon after being fourth at the midpoint. He closed 7.0s behind the Finn.

He climbed a place when team-mate Pierre-Louis Loubet rolled at the tricky final stage bend and lost two minutes, plunging to ninth.

Overnight leader Craig Breen was today’s big loser. The Irishman was fourth until he slid off the road this morning and struck a post in the grass. The impact broke his Puma’s front-left suspension and he retired for the day.

In the chase for FIA WRC2 honours, Norway’s defending champion Andreas Mikkelsen tops the order in a Toksport WRT Škoda Fabia Rally2 Evo. He heads Hyundai Motorsport N’s Teemu Suninen (Finland) by 12.1s with Bolivian Marco Bulacia third in another Toksport Fabia. Finland’s Emil Lindholm had led the category but dropped back with a damaged tyre. He’s fourth overnight, one place ahead of compatriot Jari Huttunen, whose M-Sport Ford Fiesta Rally2 was delayed by an early engine issue.

Rally Estonia resumes tomorrow (Saturday) with the 11.73-kilometre Elva stage due to begin at 09h03 local time (08h03 CET). Elva is one of nine stages scheduled during day two of round seven of the 2022 FIA World Rally Championship with the action centred around the ski resort of Otepää.