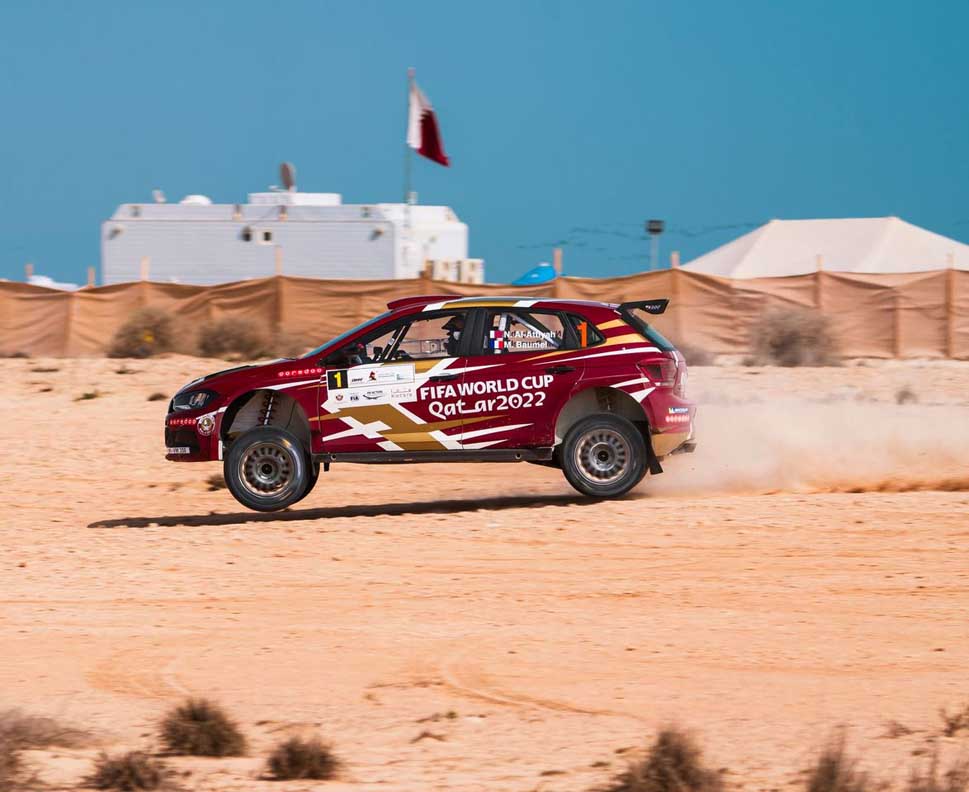 The two rivals shared a pair of stage wins apiece through the northern deserts and were separated by 10.3 seconds before the last action of the day. Meeke and English navigator Sebastian Marshall damaged the underside of their Škoda Fabia R5 after a heavy landing over a jump and were forced to stop after the stage.

The actual time loss was only 46.9 seconds, but the radiator had failed after the impact and damaged the intercooler. Rather than risk damaging the engine more seriously, Meeke stopped the Fabia on the road section and had to be towed back to Losail with hefty time penalties later awarded that will drop him down to sixth place on Sunday’s restart under Rally2 rules.

That drama enabled Al-Attiyah and French co-driver Matthieu Baumel to guide their Autotek Volkswagen Golf GTi R5 to the night halt with a 1min 40.6sec advantage over Abdulaziz Al-Kuwari and new Irish co-driver James Fulton in their Škoda Fabia R5.

“It was a good day for us,” said Al-Attiyah. “It was not easy. Kris Meeke was pushing really hard. The level was really high so I am very happy.”

Al-Kuwari, the 2012 Qatar International Rally winner, had not been on the leading duo’s pace in the last two stages after a flat tyre and dust issues, but the Qatari finished the day comfortably clear of third-placed Khalid Al-Suwaidi and his navigator Hugo Maghalães.

“We started well on the first two stages, where the gap was not too big to Nasser and Kris,” said Al-Kuwari. “The second loop we had some problems with dust. I stopped on one hairpin, where I could not see the road at all. On the last stage we had a flat tyre, front-left. Second place is not bad though and tomorrow is longer and tougher than today. The car was good, the team did well and so did my new co-driver. It is not easy to read the roads here.”

Sheikh Suhaim Al-Thani belied his lack of rallying experience to post an impressive debut drive to sixth in the Motorsport Italia-run Škoda. Oman’s Zakariya Al-Ofi was seventh and second in MERC 2 and Saudi Arabia’s Salef Al-Saif led the FIA T4 section in his Can-Am with eighth.

Ahmed Al-Mohannadi led the Qatar National Rally at the end of the day by 53.2 seconds in his Can-Am from Khalid Al-Mohannadi. Qatar-based Ahmed Allouh and Lebanon’s Jad Aawar were third and fourth. 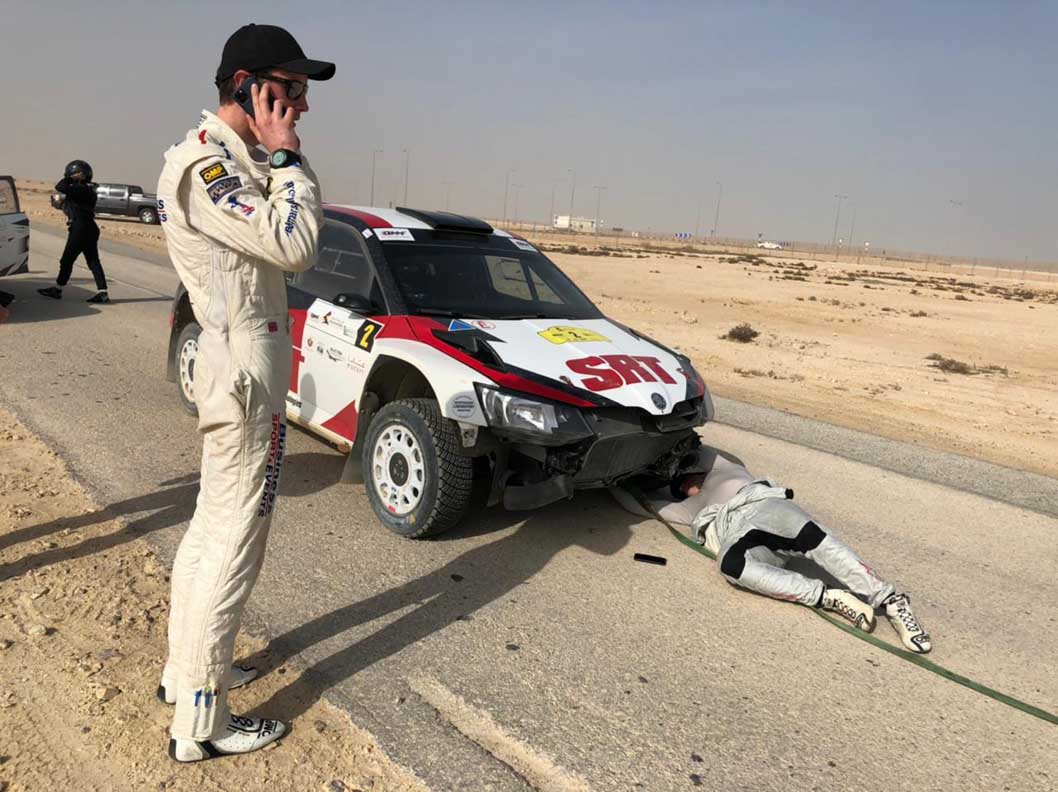 Nevertheless, the defending champion headed to the start of the 20.13km Eraida desert stage with a 2.7-second advantage over Abdulaziz Al-Kuwari. Khalid Al-Suwaidi had climbed to third and Meshari Al-Thefiri slotted into fifth behind Meeke.

Al-Attiyah laid down the gauntlet to his challengers from the outset and he beat Meeke by 6.5 seconds on the first pass through Eraida to extend his advantage to 14.9 seconds. Al-Kuwari slotted into third and a 30-second gap appeared between the former rally winner and nearest rival Al-Suwaidi in fourth.

Abdullah Al-Rawahi (broken steering arm) and Jassim Al-Muqahwi (mechanical) failed to complete the special and retired, as Al-Thefiri continued to edge clear of his MERC 2 rivals, despite complaining of dust issues and reduced visibility on the stages.

Meeke earned his first ever MERC desert stage win in Al-Thakira (20.34km) and trimmed Al-Attiyah ‘s lead to 13 seconds, as crews returned to Losail for the midday regroup and service. Mohamed Al-Attiyah stopped at the start of a stage where Al-Kuwari and Al-Suwaidi consolidated third and fourth overall and Al-Atya rounded off the top five.

Al-Kuwari actually took a wrong slot in the special, after losing his way in Meeke’s dust, and this cost him some seconds. Oman’s Zakariya Al-Amri was excluded for taking a short cut on the stage.

Meeke continued his winning ways on the re-run of Eraida and another fastest time saw Al-Attiyah’s advantage pegged back to 10.3 seconds. But Meeke damaged his Fabia after a heavy landing on the last test of the day and gifted a comfortable lead to the Qatari.

After regroup and service at the Losail Sports Arena, the three timed tests are repeated at 12.05hrs, 12.45hrs and 13.25hrs. The rally then concludes with the post-event press conference (19.15hrs) and the ceremonial finish (19.45hrs) at Katara. 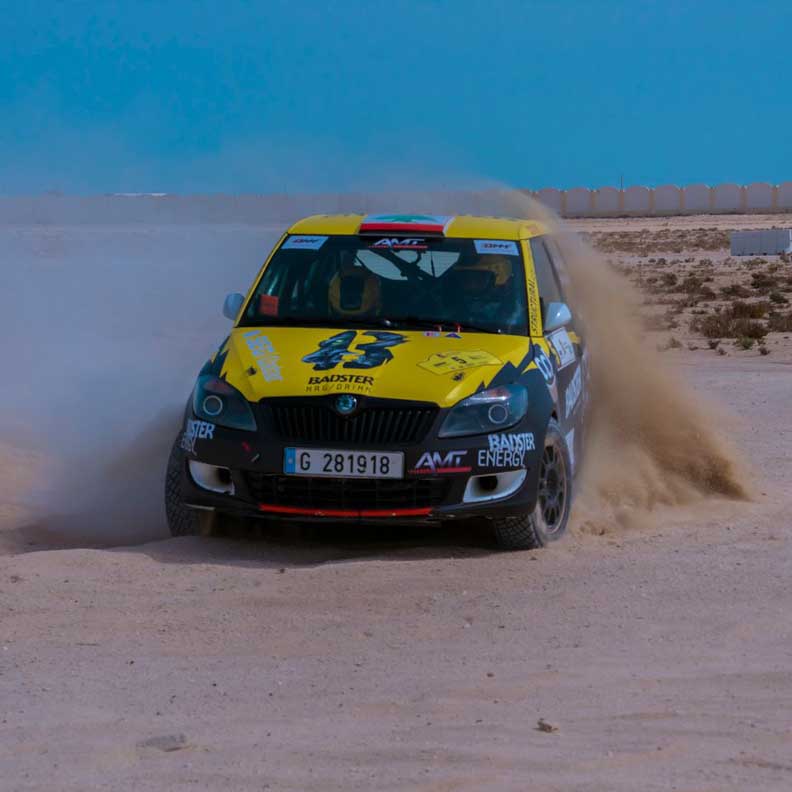 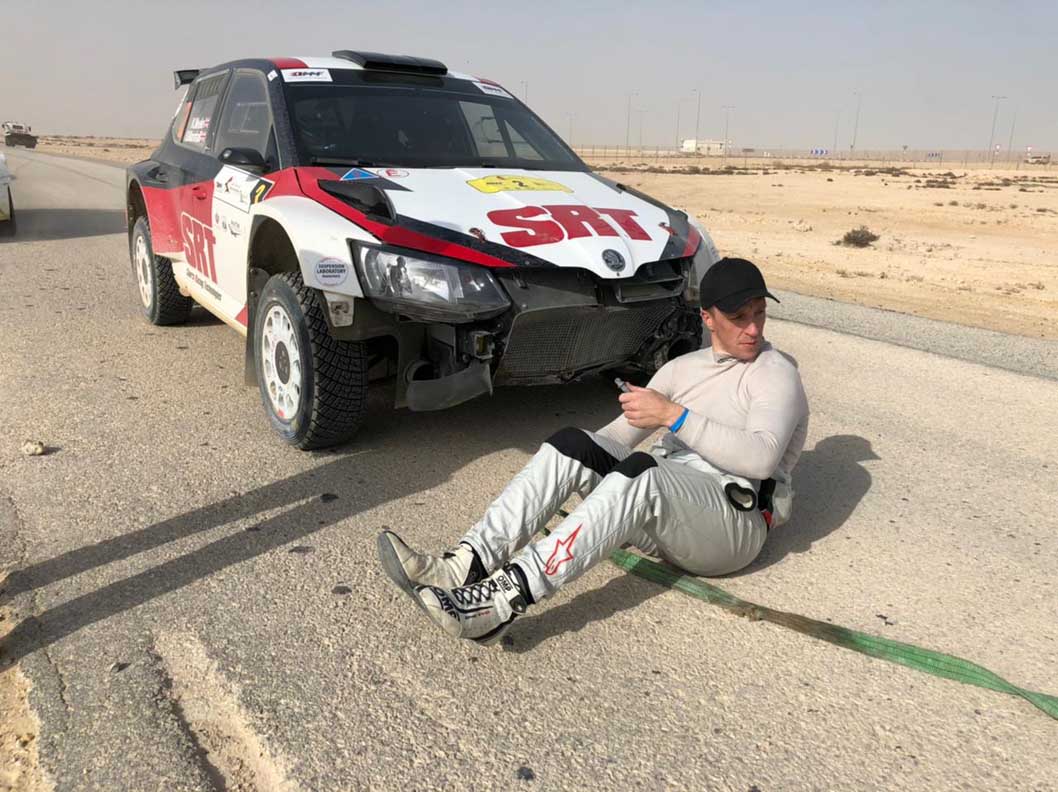 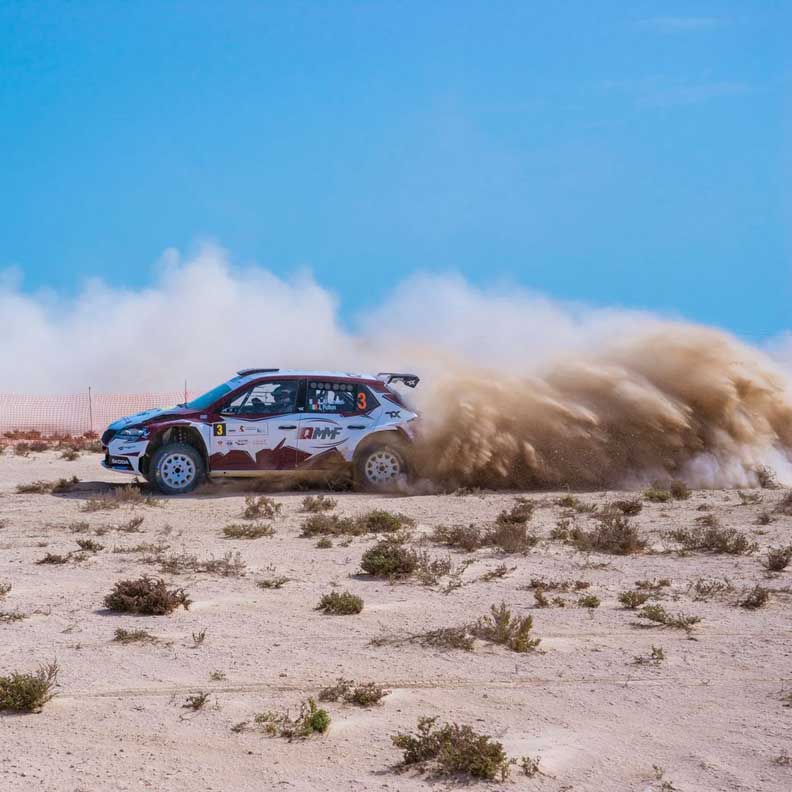 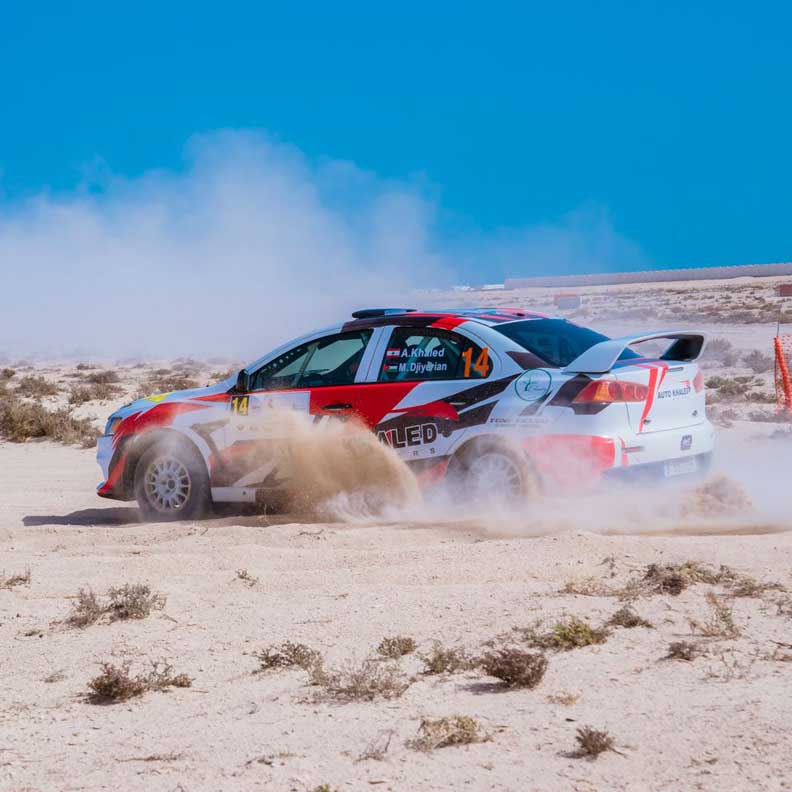 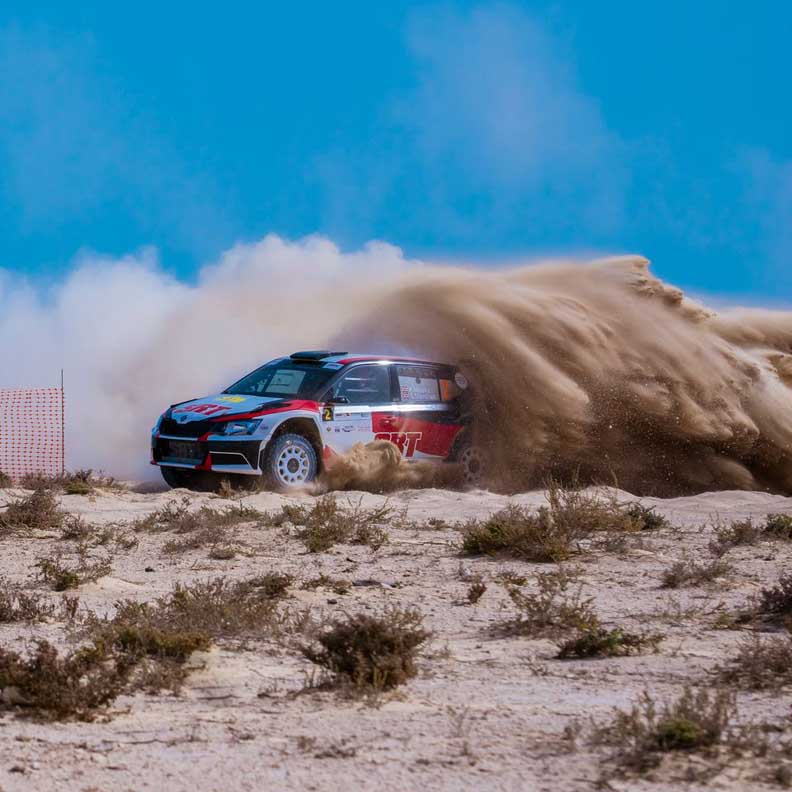