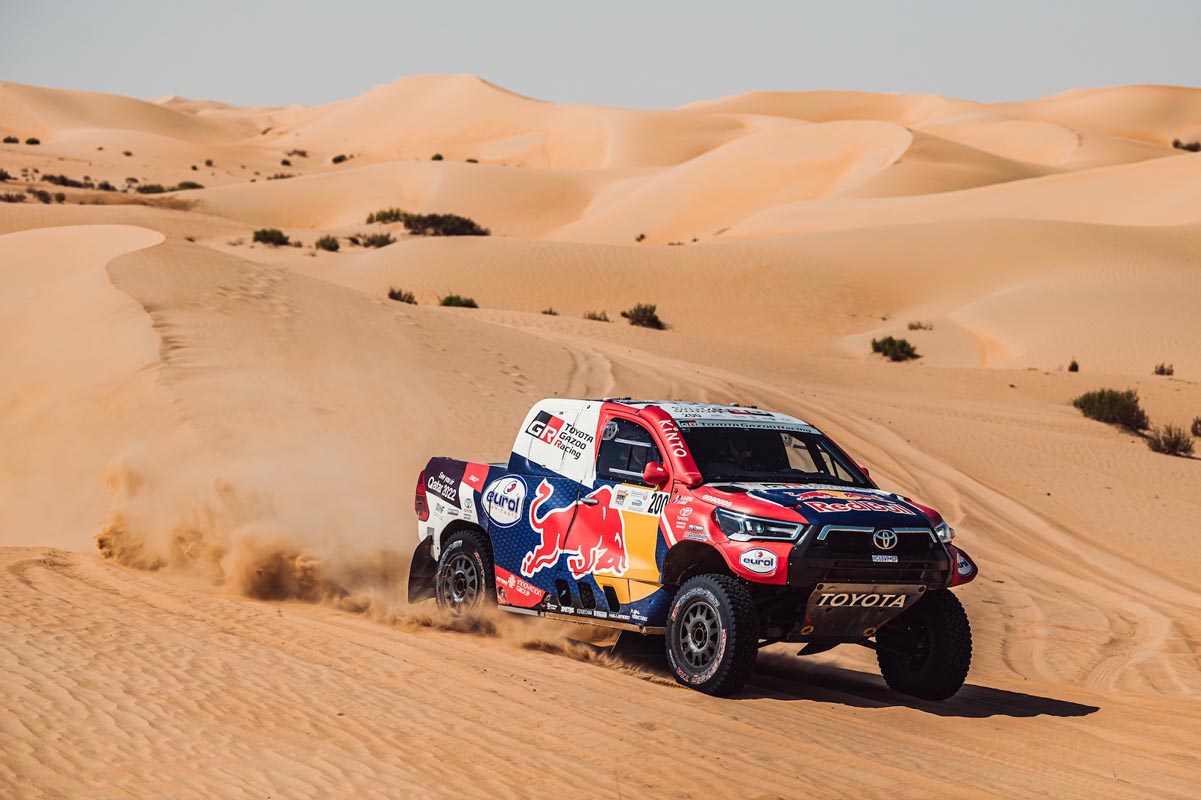 Nasser Al Attyiyah made the perfect start today as he launched his pursuit of a third triumph in the Abu Dhabi Desert Challenge, while Botswana’s Ross Branch set the pace in the bikes with a masterful ride through the Al Dhafrah dunes.

Partnered by Mathieu Baumel in a Toyota Hilux, Al Attiyah is trying to clinch the drivers’ title in the FIA World Cup for Cross Country Rallies with one round to spare, and he made his intentions clear on a fascinating first leg.

It was an epic day of cross country rallying at its best, as the Abu Dhabi Desert Challenge celebrated its 30th anniversary, with the leading drivers and riders seemingly avoiding any thoughts of taking things easy, with four more demanding desert stages remaining.

“You have to be bold to win this event, as we’ve seen over the years, said Mohammed Ben Sulayem, President of the Emirates Motorsports Organization (EMSO) and FIA Vice President for Sport. “This is a great test in every aspect of cross country rallying, and concentration now will be so important.”

Claiming seventh place overall on the day, Poland’s Marek Goczal and Lukasz Laskawiec in a CAN-AM Maverick also topped the FIA T4 category, while young Emirati Mansour Al Helei forced his way into the top ten alongside Abdulla Dakhan in another CAN-AM Maverick.

Reaching the end of the Ruler’s Representative Court Al Dhafrah Region stage, Al Attiyah declared: “It was exciting and I think we did a good job today. It was an amazing run. Our goal is to win the rally and win more points. After today we know where we are, and we can now plan for tomorrow.”

New FIM cross country rallies bikes champion Matthias Walkner on a KTM was edged out by four seconds as Yamaha star Branch, winner of this year’s opening round in Kazakhstan, set a blistering pace which caught the Austrian by surprise.

“It was good fun,” said Branch at the end of the stage. “The dunes can be dangerous and I gave myself a few frights, but all in all it was good. It’s really hot, but I think we did okay today.”

Walkner, who clinched the RallyGP crown with second place in Morocco last month, said: “Everyone was pushing hard so it was a difficult day. I enjoyed the terrain, but I got tired towards the end because of the pace.”

Argentinian rider Franco Caimi was just over three minutes further away in third place on his Hero, with Australian Gas Gas rider Daniel Sanders, and Yamaha team-mates Adrien Van Beveren of France and American Andrew Short, completing the top six on the day.

Top Emirati rider Mohammed Al Balooshi was satisfied with his tenth fastest time on the leg. He said: “I am happy with my bike despite it being an old (2016) model. Now it’s back to the bivouac to prepare myself mentally, and the bike for tomorrow.”

The 2018 Abu Dhabi Desert Challenge winner from the Czech Republic, Martin Prokop, was fastest in the class for 2022 specification cars alongside Viktor Chytka in a Ford Raptor RS Cross Country

Argentina’s Fernando Alvarez and Frenchman Xavier Panseri in a CAN-AM Maverick lead the FIA T3 category after the opening stage.

Another Argentinian, Manuel Andujar, topped the quads standings on a Yamaha Raptor while

Israeli’s Roy Bartov and Guy Biton in a CAN-AM Maverick X3 were quickest in the FIM SSV 3 category. 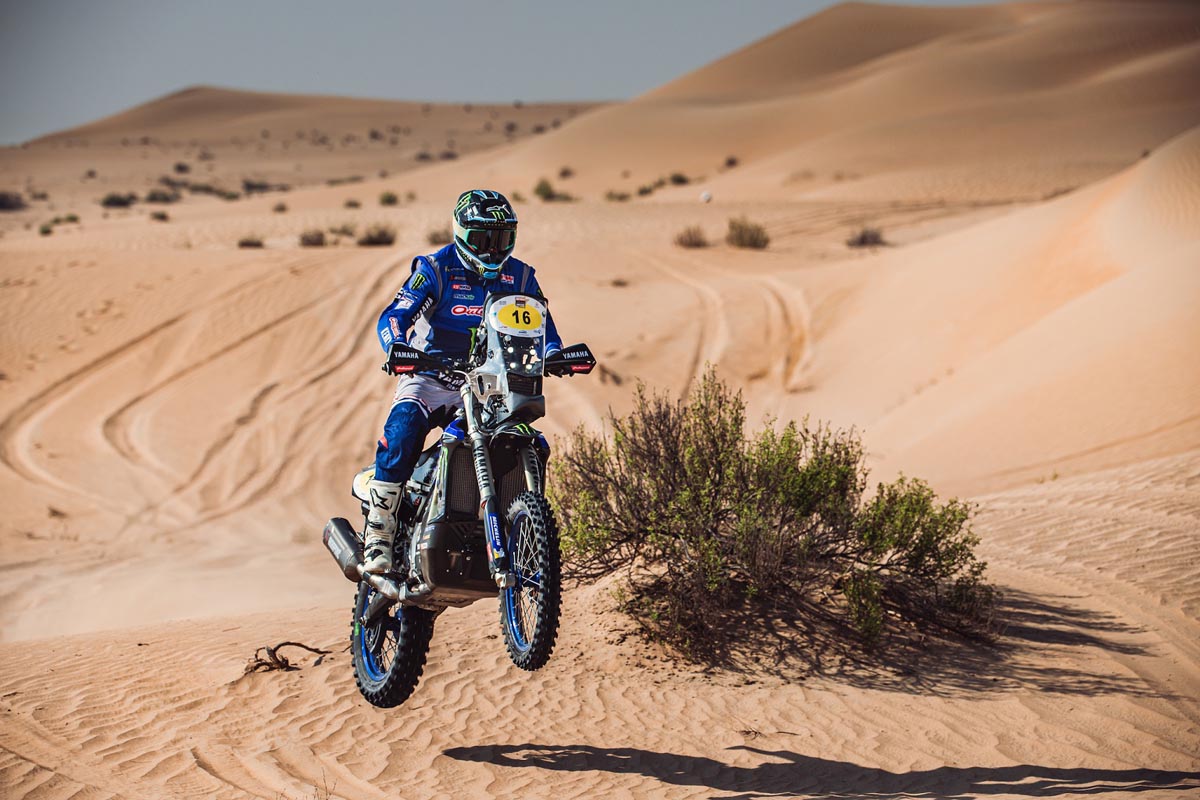 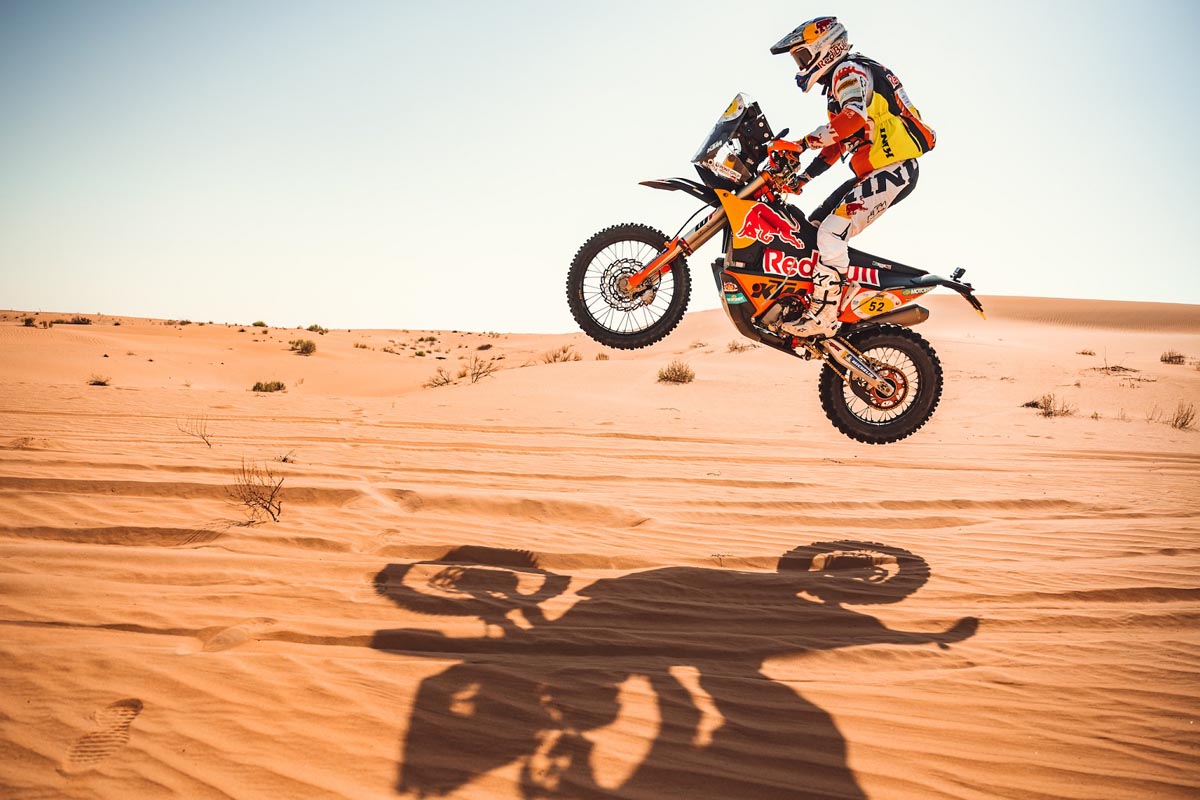 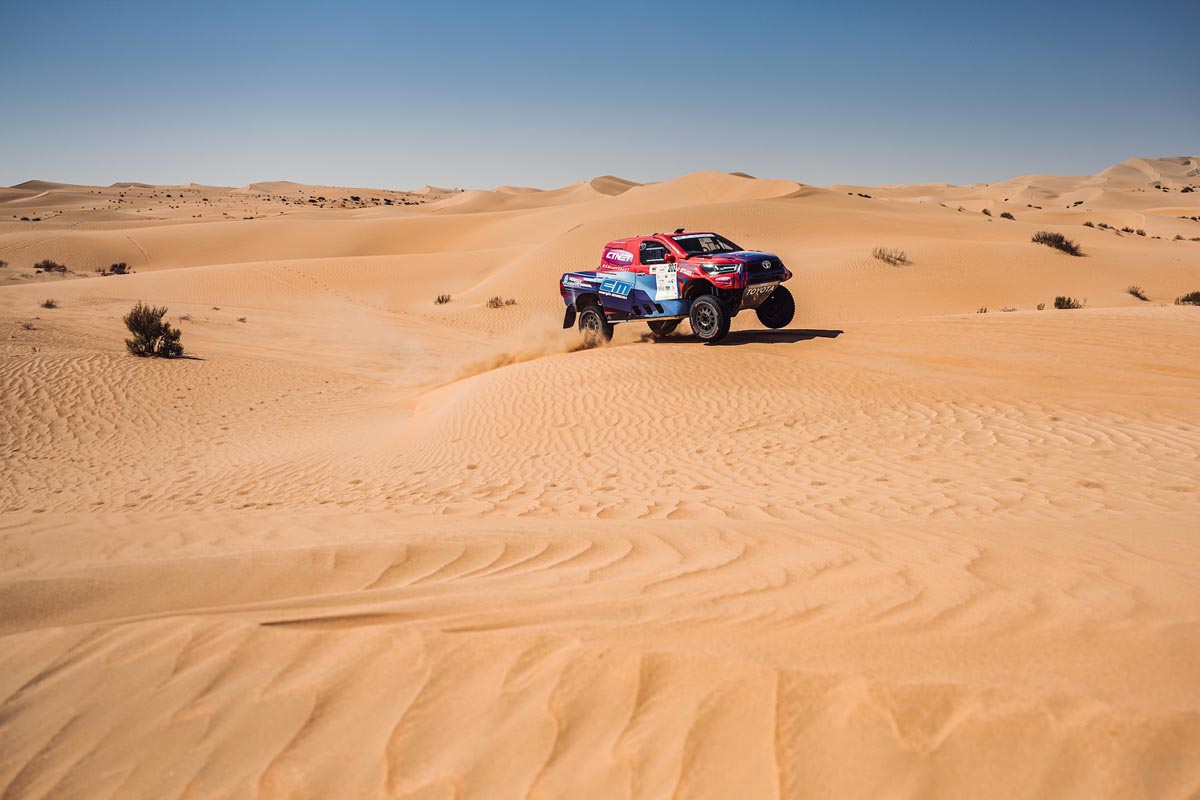 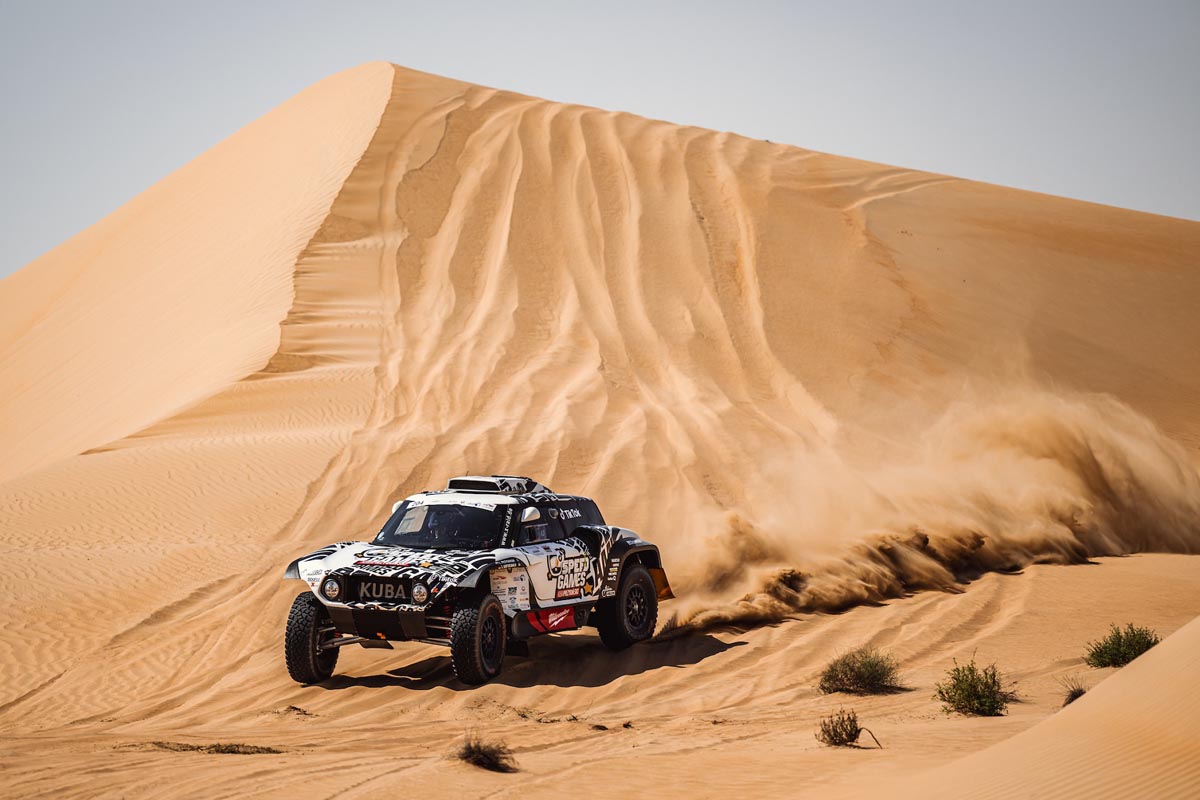 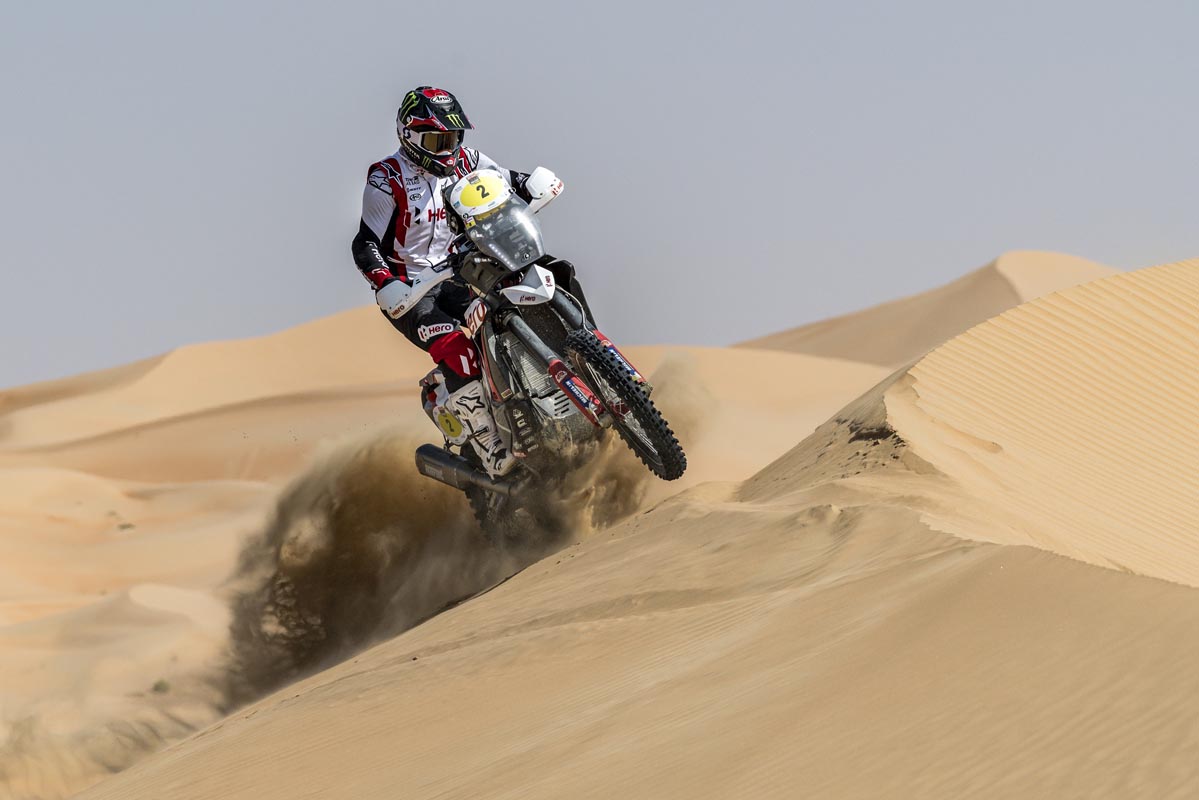