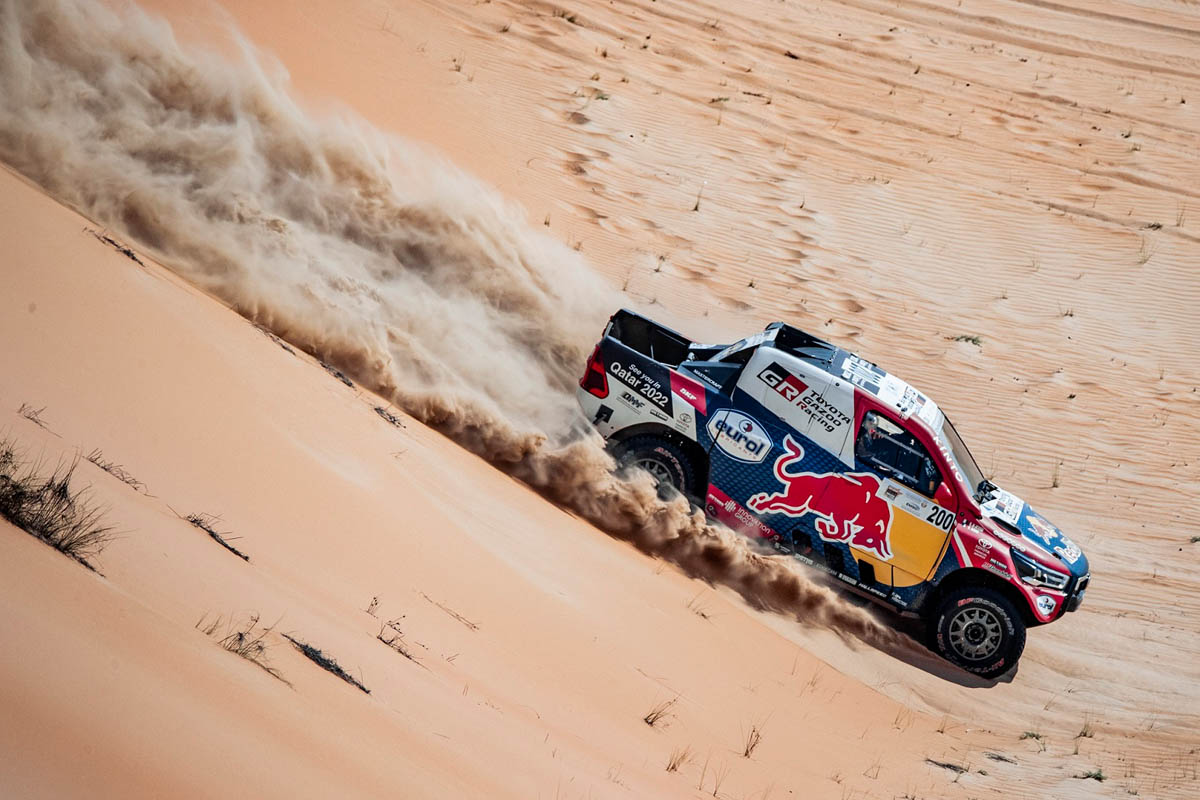 The 30-year history of the Abu Dhabi Desert Challenge is crammed with moments of high drama and displays of bravery and perseverance, and the latest chapter is quickly becoming a classic in its own right.

The rally was certainly not won nor lost on today’s 318km ADNOC Distribution Stage 2, although it ended with the pre-event favourites for the overall drivers’ and riders’ titles out in front, while some high hopes had been dashed.

Nasser Al Attiyah set the fastest stage time for a second day running alongside Mathieu Baumel in a Toyota Hilux, as he looks to clinch a third Abu Dhabi Desert Challenge success, as well as this

While this may look comfortable, Al Attiyah knows from previous experience that a lapse in concentration can blow a much bigger advantage in this event.

The 2008 and 2016 champion admitted at the finish: “It was not an easy day because we took more than four hours driving through the desert. But it was a good experience and we learnt a lot.

“We are excited about the next three days, and we hope to do our best to stay at the top.”

Branch suffered a heavy crash on his Yamaha 10km from the end of today’s stage. He is still in fourth place, 5 mins 36 secs from new leader Walkner, but said: “With so much damage to the bike, I think the rally is over for me. I’m so glad to be in one piece.”

Adrien Van Beveren on another Yamaha took the stage honours on the day, but second fastest was enough to give Austrian KTM star Walkner a 2 mins 38.8 secs advantage over the Frenchman.

“I’m super tired – it’s really hot,” said Walkner. “The last 100km I was pushing like hell with force, not to lose time and let the guys catch up.” The UAE’s Mohammed Al Balooshi held his top ten position and will hope experience and local knowledge can see him climb over the next three legs.

Mohammed Ben Sulayem, President of the Emirates Motorsports Organization (EMSO) and FIA Vice President for Sport, arrived at the bivouac from overseas business.  “The rally has many faces, and while it can be incredibly rewarding, there are days when it can be very tough as well,” said the rally founder. “But it’s always fair.”

Yahya is staying on to support his son Mansour, who finished the day eighth overall and fourth in the FIA T4 category alongside fellow-Emirati Abdulla Dakhan in a CAN-AM Maverick.

“What happened yesterday sometimes just happens in rallies,” said Yahya. “But I’m happy. I’m happy because this is my rally. It’s the rally I love. I’m happy to be here with all the friends I’ve made on this rally. I will keep taking the challenge for many years to come. Now I will support Mansour. I want to see him become the champion one day.”

Sending the cars, buggies, bikes and quads on a dramatic passage over the Al Dhafrah dune ranges and sand tracks, today’s ADNOC Distribution stage was the kind of which legends have been made over 30 years of the Abu Dhabi Desert Challenge.

One particularly spectacular range of dunes delivered competitors to the ADNOC Distribution refuel at Arada Fort, ahead of some classic tracks leading to the finish at the bivouac.

Finishing the day fifth overall, American Austin Jones and Brazlilian Gustavo Gugelmin in a CAN-AM Maverick lead the FIA T4 category which has five cars in the top ten.

Russia’s Pavel Lebedev and Kirill Shubin in a CAN-AM Maverick now lead the FIA T3 category while the Czech Republic’s Martin Prokop and Viktor Chytka in a Ford Raptor RS Cross Country have a huge advantage in the class for 2022 specification cars.

Argentinian Manuel Andujar has a big lead over the UAE’s Abdulaziz Ahli in the quads, while

Roy Bartov and Guy Biton in a CAN-AM Maverick X3 still set the pace in the FIM SSV 3 category. 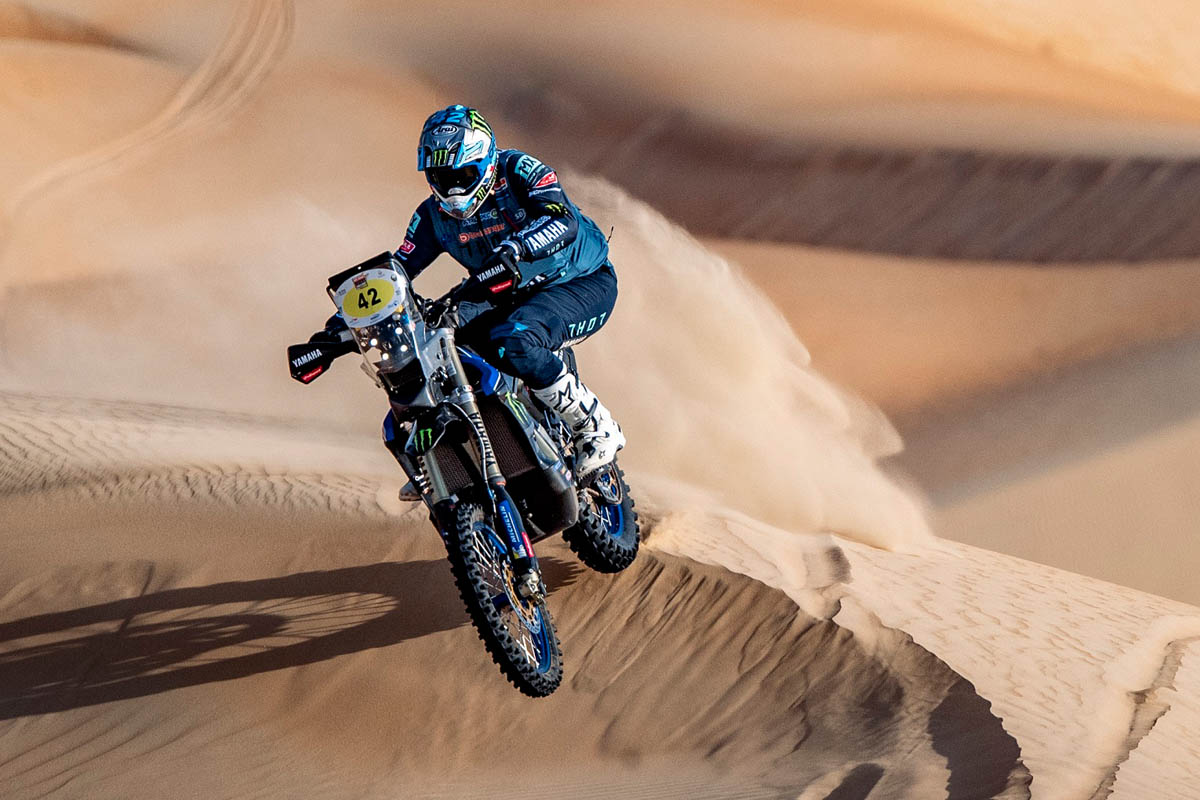 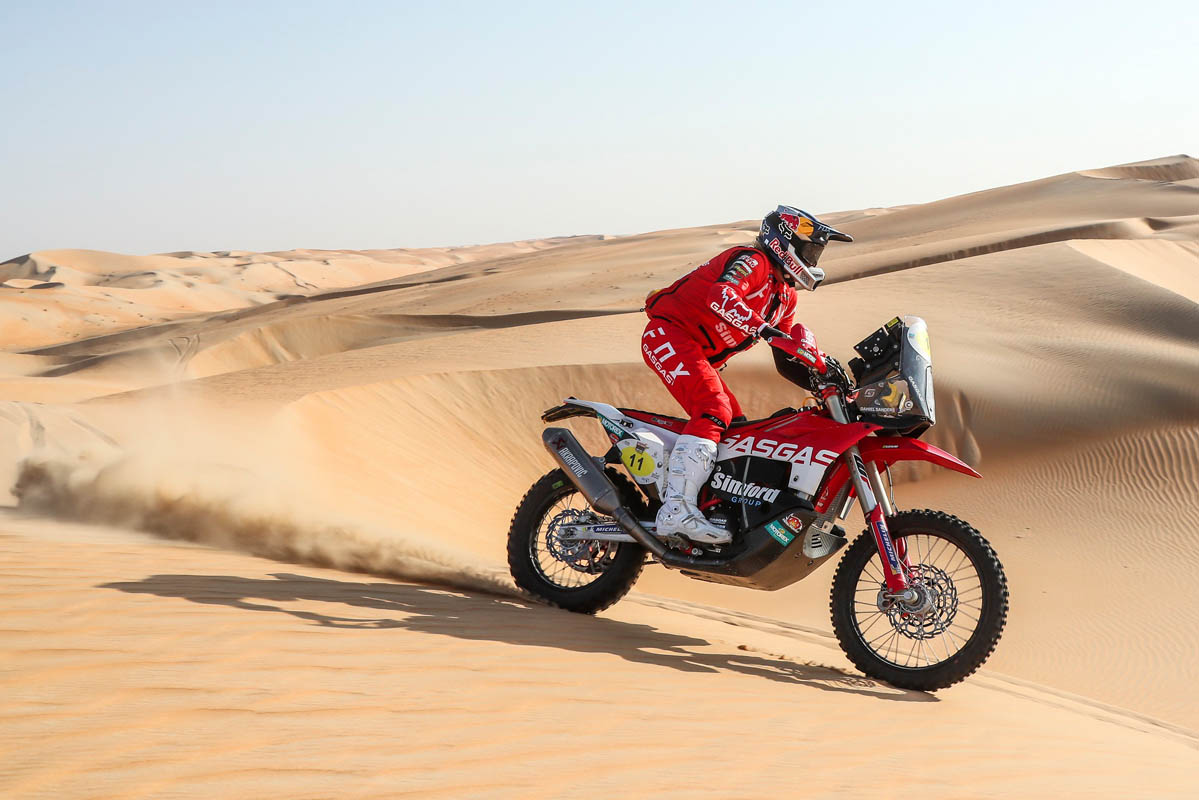 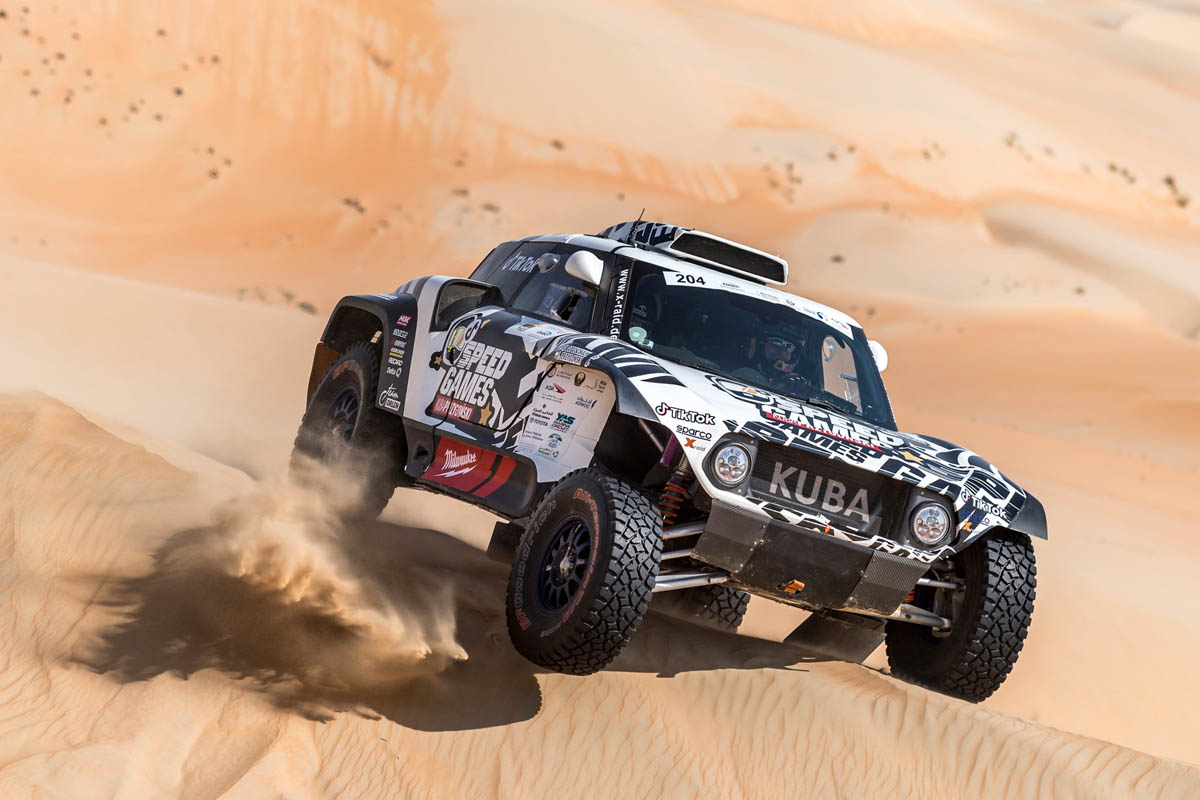 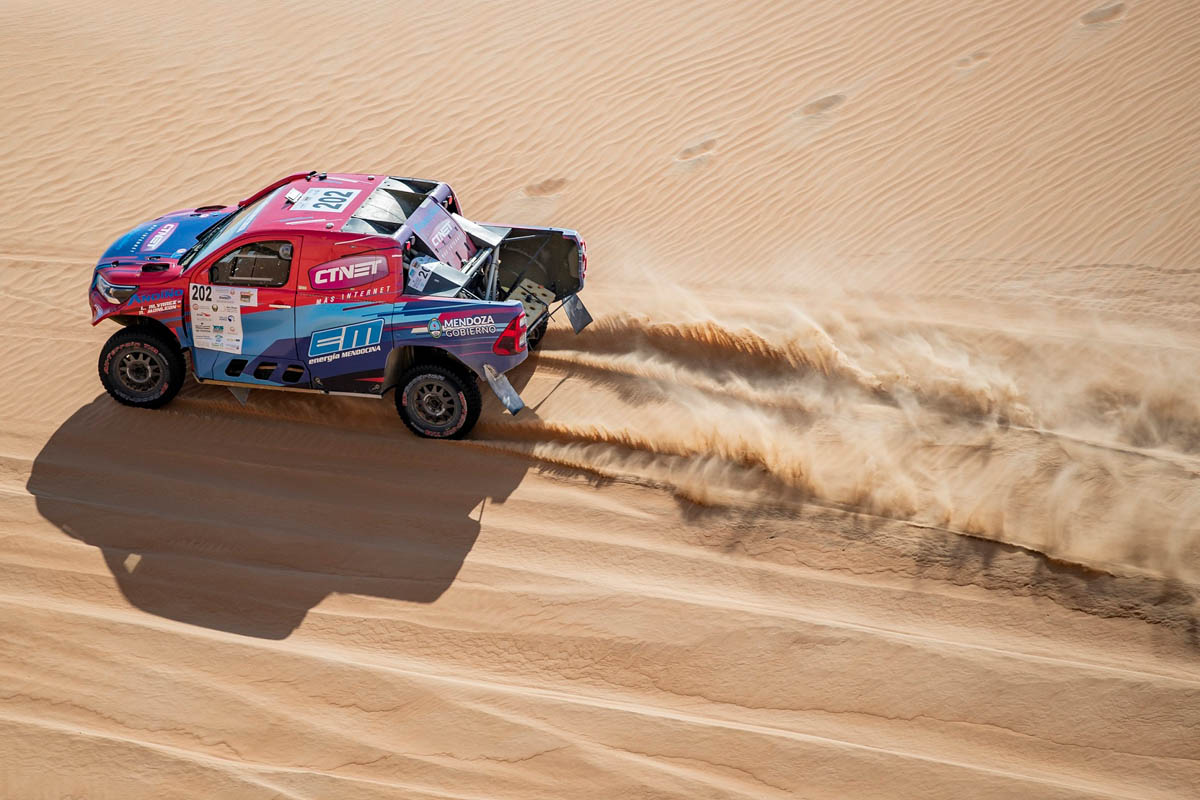 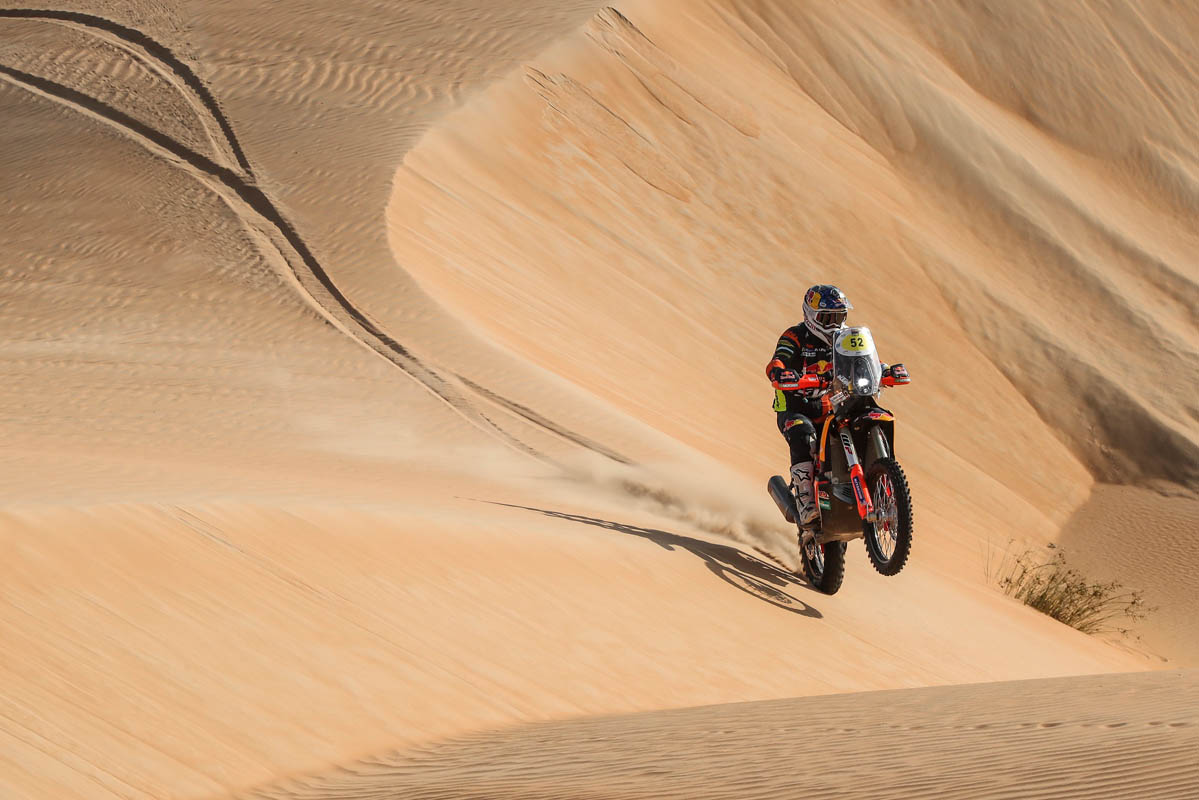