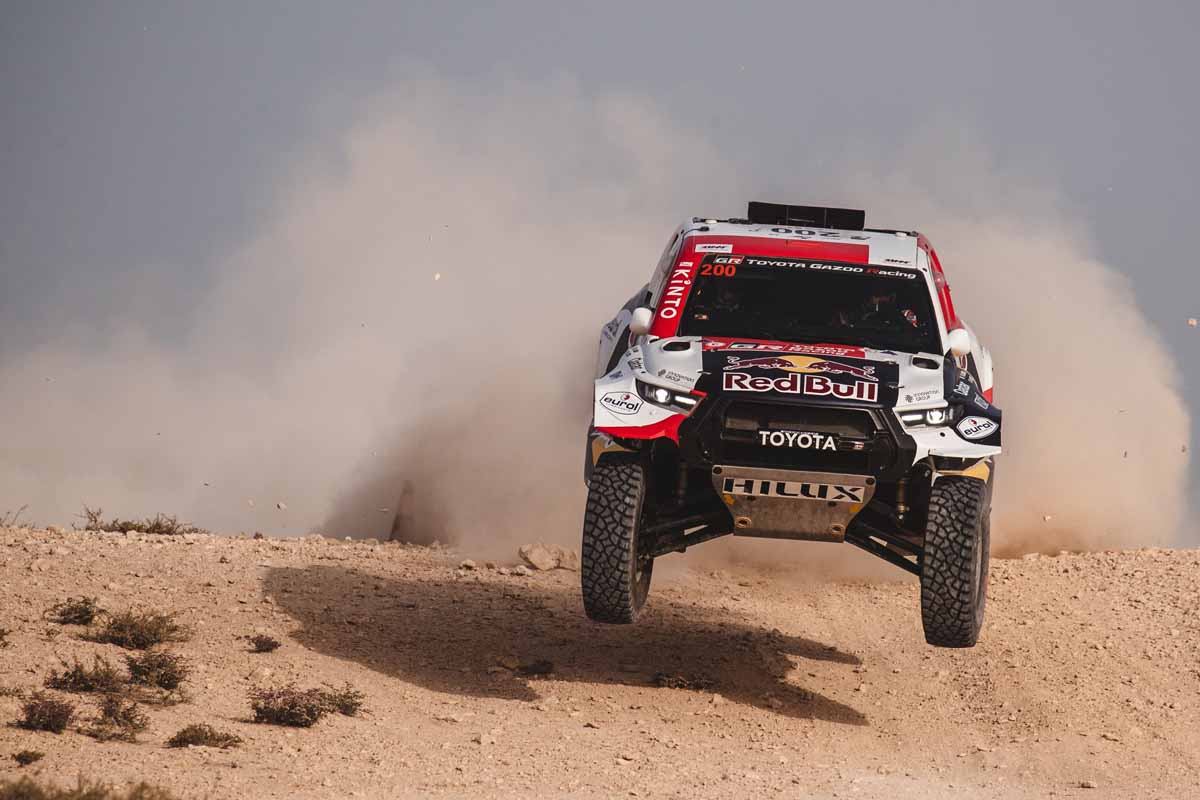 A time of 5min 11.8sec ensured that Nasser Saleh Al-Attiyah and Mathieu Baumel were the early leaders of the second round of the FIA Middle East Cup for Cross-Country Bajas. The defending Dakar champion guided the latest specification Toyota Hilux to a 4.3-second lead over Toyota team-mate Yazeed Al-Rajhi.

“A good start because it was not easy in a narrow place,” said Al-Attiyah. “I think we did a good job without any mistakes. Tomorrow will be much faster. Maybe it’s better for me to start first. I don’t want to be behind the Can-Am. Maybe it will be more dusty. We will see.”

Al-Rajhi added: “Happy we finish because the car switch off a few times. I think electric problem. But we only lose 4.3 seconds. We pushed very well. We continue to push. Most important for me is to enjoy. That’s why I came here.”

Dabrowski, the son of former cross-country rider and driver Marek, stopped the clocks in 6min 01.3sec to lead the motorcycle and junior categories on his Husqvarna FR450. With the time multiplied by a coefficient of four, the Pole headed into the night halt on the second round of the FIM Bajas World Cup with a comfortable lead and the choice of a favourable starting position for Friday.

Defending Qatar Baja champion Al-Balooshi said: “This is one of the toughest events you can tackle on a bike. The navigation is exceptionally difficult, especially when you are competing against the clock. I should know, I’ve had good results and I’ve also been evacuated by helicopter in the past. Riders will also need to be very careful on Friday when we do the second stage after the cars. There are sure to be ruts and tracks in the softer places and that will make it even more tricky for the bikes.”

Andorra-based Ulsterman Kris Meeke began his campaign strongly in a Nasser Racing-entered Can-Am and teamed up with Frenchman François Cazalet to record the third quickest time in the car section to hold third overall and first in the FIA T3 category. Former WRC team-mate and desert debutant Dani Sordo finished fifth overall and second in T3.

“I have never been in this situation where all the categories are linked together,” said Meeke. “I had half an idea that I would be ninth or 10th fastest, which means you are opening the road. I didn’t want to end up playing the game. Today was totally different to what we can expect tomorrow. Today we made pace notes, so it was half a rally stage, half a cross-country stage. I did the whole Dakar in an open car. The temperatures today were not so bad. I enjoyed it. The South Racing Can-Am is so nice. It’s balanced and everything works correctly.”

“It is difficult to find the point to turn in to the corners (open desert),” added Sordo. “I need to know how much you can go out when the waypoint is coming. The only problem is the corners never arrive… We had a problem with the sun (vision). But it’s good fun. Fifth today but we want more…”

Hani Al-Noumesi edged into a small lead over Saudi rivals, Faisal Al-Suwayh and Abdulmajeed Al-Khulaifi, in the quad category. Emiel Stuckens struggled to get his quad to fire up at the start of the stage, but the Belgian went on to finish fourth.

Eighteen FIA machines, including 11 in T3 and three in T4, were permitted to start, in addition to six vehicles in the National Baja. Several drivers, including Miroslav Zapletal, Saleh Al-Saif, Khalid Al-Feraihi and Mohammed Al-Tuwaijri, were not able to attend the event. Abdullah Al-Rabban was demoted to the National Baja after his Jeep failed to comply with the most recent safety regulations.

Qatar-based Australian rider Martin Chalmers sustained a pre-event arm injury and was forced to withdraw his entry after racing so strongly at the opening round of the FIM Baja series in Jordan. 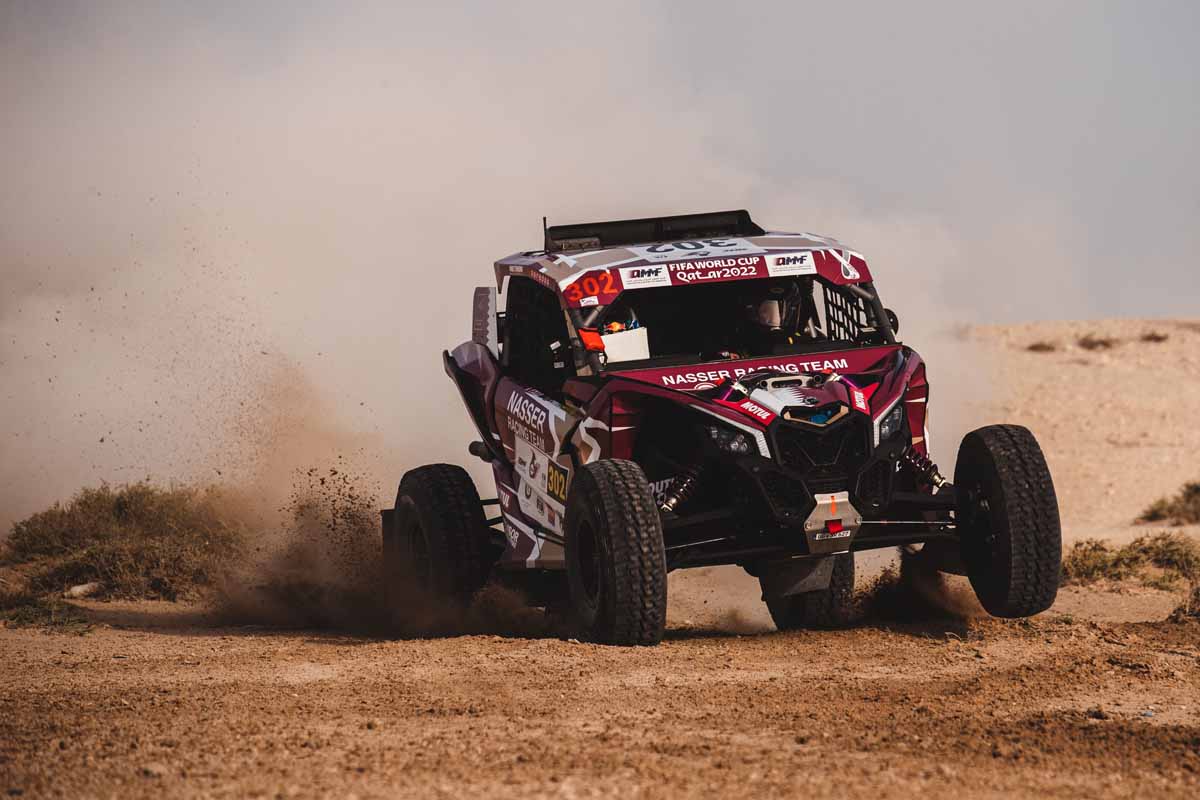 Motorcycles, quads and the solitary FIM SSV will start the slightly longer of the two sections first from 09.25hrs and then move on to the shorter combined second section of 122.73km after a 20-minute neutralisation stop and refuel. 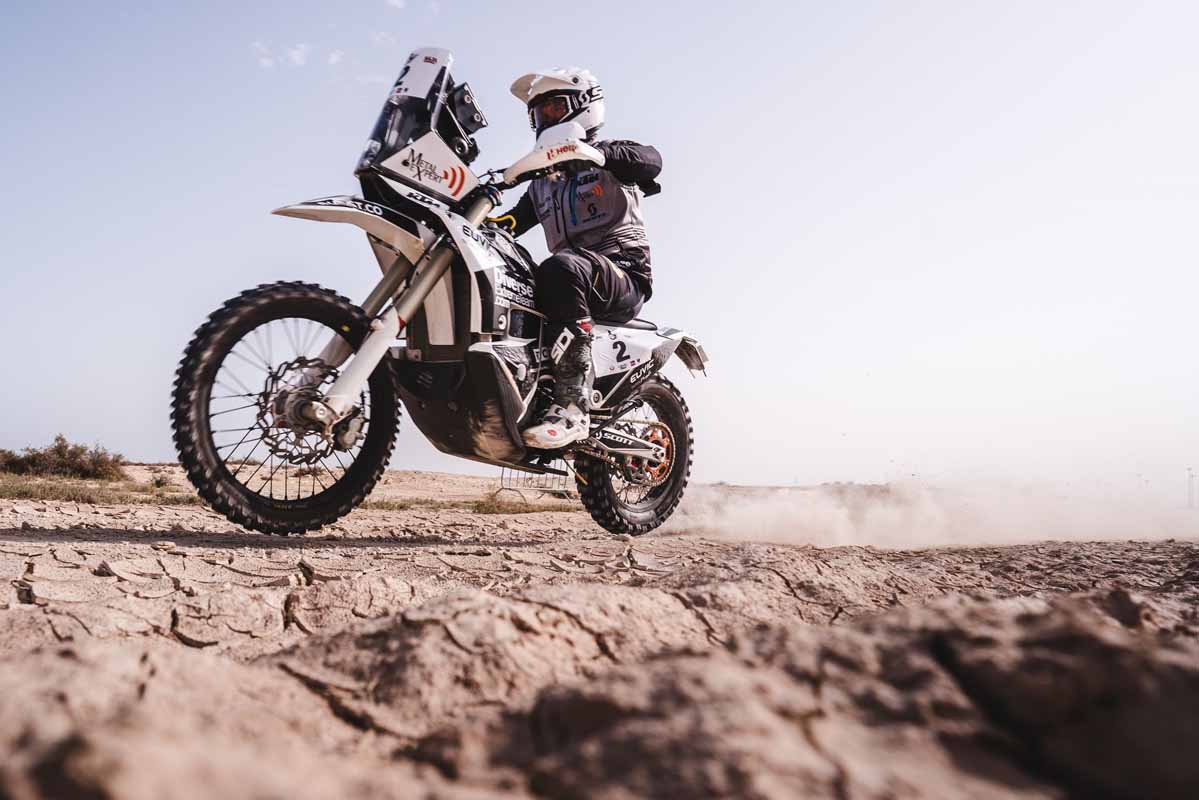