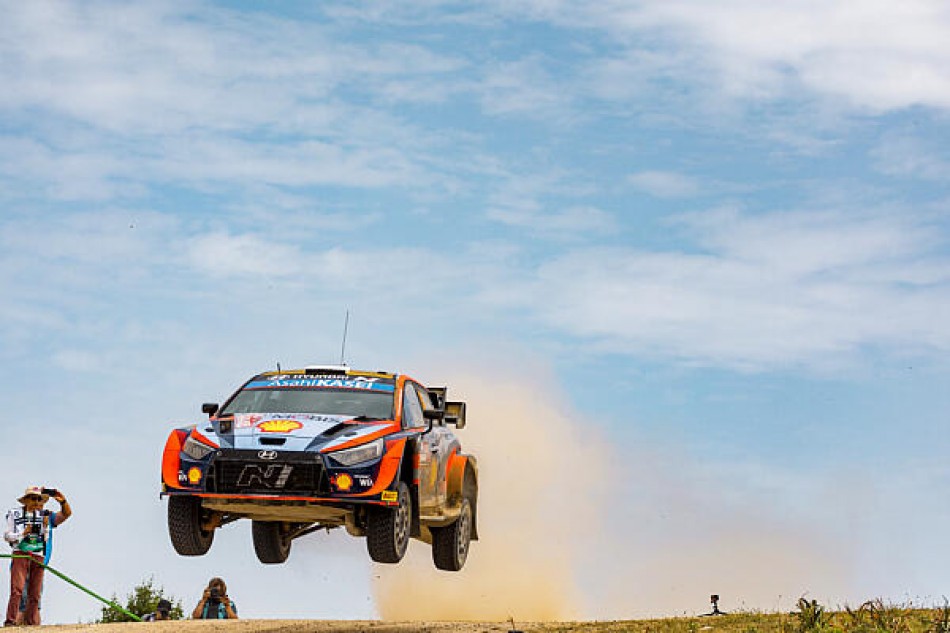 Ott Tänak is on course for a much-needed victory at Rally Italia Sardegna after leaving his rivals for dust on Saturday’s penultimate leg.

The Estonian driver will start Sunday’s final leg with a hefty 46.0sec advantage over M-Sport Ford’s Craig Breen after pulling clear on what was a disastrous day for Friday leader Esapekka Lappi.

The stage was set for a thrilling battle after Lappi led Tänak by 0.7sec overnight, but he retired on Saturday’s opening Tempio Pausania speed blast when a heavy compression sent his Yaris flying into a rock which ripped off the rear left wheel.

Lappi’s demise left Tänak all alone at the front and, despite insisting he wasn’t pushing, the stage times suggested otherwise as he won six of the day’s seven speed tests.

While his title hopes may be slim after a poor start to the season, victory here would mean a lot to Tänak. He hasn’t stood on the top step of the podium since Arctic Rally Finland in 2021, which was 461 days ago.

“It’s been a good day,” reflected Tänak. “In the car we had quite a good feeling. The roads were holding up well in the afternoon and it was quite enjoyable.

“On the first stage this morning, when Esapekka was still in the fight, we gave it a good push. After that, I would say we were slowing down step by step, but the times were still coming. I guess, if you’re in the mood, that’s how it should be.

“We’ve been in this position before and we know how it is. It’s not over until the finish line is crossed, so let’s say it’s better not to think about that just yet,” he added.

Breen was the only other driver to win a stage on what was a hot and dusty day. The Irishman started third before snatching the runners-up spot when team-mate Pierre-Louis Loubet punctured on the opening test.

He was pressured by Hyundai’s Dani Sordo in the morning, but managed to build a comfortable buffer as Sordo struggled for pace later in the day. 20.8sec separated the pair at close of play.

Loubet delivered a mature drive to bring his Puma home fourth. He trailed Sordo by 25.0sec, but had 51.4sec in hand over fifth-placed Kalle Rovanperä, who started the day eighth after opening the road on Friday.

Rovanperä broke into the top five late in the day when Adrien Fourmaux crashed his Ford on the final Monte Lerno Di Pattada blast and the stage was subsequently red-flagged.

Takamoto Katsuta was almost four minutes down on the leaders. With no midday service, he was forced to drive carefully while nursing a weakened radiator which took a hit through the watersplash at Coiluna – Loelle.

Gus Greensmith was seventh, while the rest of the leaderboard comprised of support category cars. WRC2 leader Nikolay Gryazin headed Jan Solans and Chris Ingram, who completed the top ten.

Hyundai’s Thierry Neuville was eyeing a climb up the leaderboard after ending Friday ninth following transmission woes. However, the Belgian’s luck ran out on the third stage of the morning when a rollover put him out for the day.

After restarting following his Friday retirement, Elfyn Evans came unstuck once again when rear suspension failure sidelined his Yaris in the afternoon.

In the FIA WRC2 class, engine issues on his Škoda Fabia Evo saw Toksport WRT’s Andreas Mikkelsen come unstuck for a second consecutive rally, opening the door for Toksport WRT2 driver Nikolay Gryazin to take the lead at Rally Italia Sardegna.
Driving an identical Fabia, Gryazin now holds a comfortable 44.9 sec lead over Jan Solans by the end of Saturday. The Citroën C3 Rally2 driver was able to keep himself clear of the gripping three-way fight unfolding closely behind him.

In FIA WRC3, an electrical issue on the day’s penultimate stage saw Czech Republic’s Jan Černý give up his class lead and lose over four minutes to new leader Diego Dominguez from Paraguay.

Rounding out the all-Ford Fiesta Rally3 top three is Zoltán László a further 8min 16sec behind. The Hungarian moved into third after Italian veteran Enrico Brazzoli ran into trouble on the second passing of Erula – Tula. A rock pierced the Movisport driver’s fuel tank and it’s unlikely he will restart on Sunday.

Crews will head north of Alghero along the coast on Sunday to tackle the Monte Baranta (14.51km) and Sassari-Argentiera (7.10km) tests. Both stages are run twice on the final day, with the latter being the venue for the bonus points-paying Wolf Power Stage, which gets underway at 1218 local time.

As has become tradition, whoever emerges from the finale on top will then dive – together with their whole team – into the Alghero harbour.