WRC – Rovanperä Back In Front On Rally Sweden, Evans Second 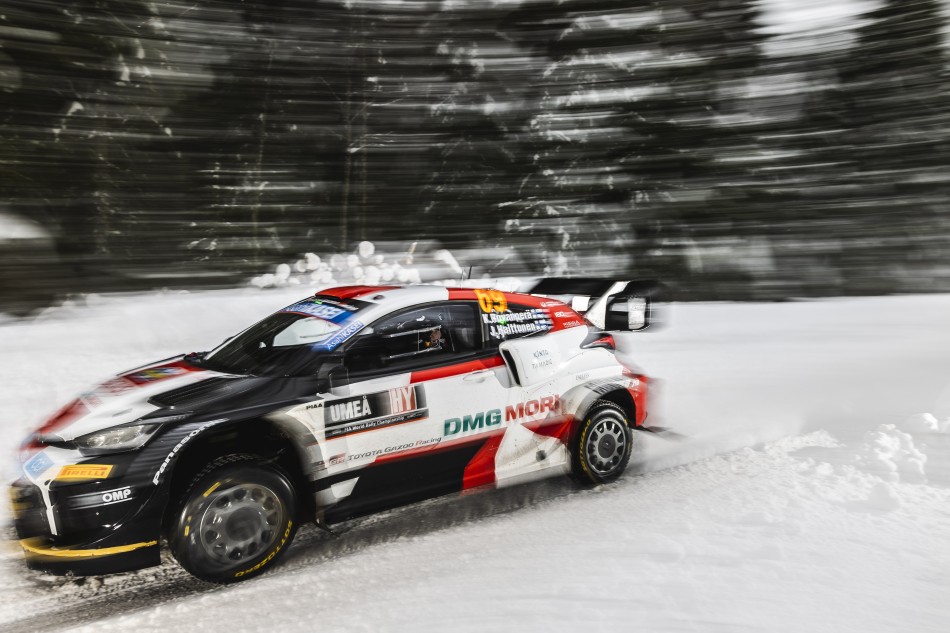 Kalle Rovanperä charged back into top spot at Rally Sweden on Saturday morning as Toyota Gazoo Racing claimed a clean sweep of the top three positions.

The Finn headed Elfyn Evans by 4.8sec, with Esapekka Lappi now 12.0sec off the lead in third. Overnight leader Thierry Neuville slid to the back of the quartet battling for supremacy after an overshoot in the morning’s final speed test.

Rovanperä regained the lead he had previously held yesterday morning with a clean drive through the opening Brattby speed test. He won the following Långed special stage before second in the final blast of the loop at Umeå left the GR Yaris driver sitting pretty at the top of the leaderboard.

“The first stage was tricky, a really narrow road and technical all the time,” he explained. “A lot of the lines were messy because everybody ahead was touching the banks. The last one also was more difficult than I expected. I made so many mistakes, stupid ones, but it’s good we didn’t lose much time.”

Evans was quickest in the opener, but the Welshman was frustrated by minor mistakes throughout the morning that left him further adrift of his team-mate than he would have liked.

Lappi started the second leg of the second round of the FIA World Rally Championship less than a handful of seconds behind Rovanperä. He could not reproduce the same pace across the loop and was left searching for solutions as the rally returned to Umeå’s service park.

Neuville struggled for grip initially, but worse was to come for the Belgian as he overshot a left corner early in the final stage in his Hyundai i20 N and dropped 11.2sec.

“I went straight on at the first braking point,” said the frustrated Belgian, “and after that, something was strange with the car. The Toyotas were really fast this morning and I couldn’t get the speed to be honest,” he added.

Oliver Solberg remained fifth in another i20 N, but the young Swede had drifted to almost a minute off the lead after struggling for confidence in the car. He was another driver hoping to find a solution in service.
Takamoto Katsuta completed the top six in another GR Yaris. The Japanese driver had almost 40sec in hand over Adrien Fourmaux, who was 12.3sec clear of Ford Puma team-mate Gus Greensmith.

Toksport’s Andreas Mikkelsen was ninth in a Škoda Fabia Evo, having regained the initiative in a fierce FIA WRC2 duel with Ole Christian Veiby having assumed the lead earlier in the morning in a Volkswagen Polo GTI.