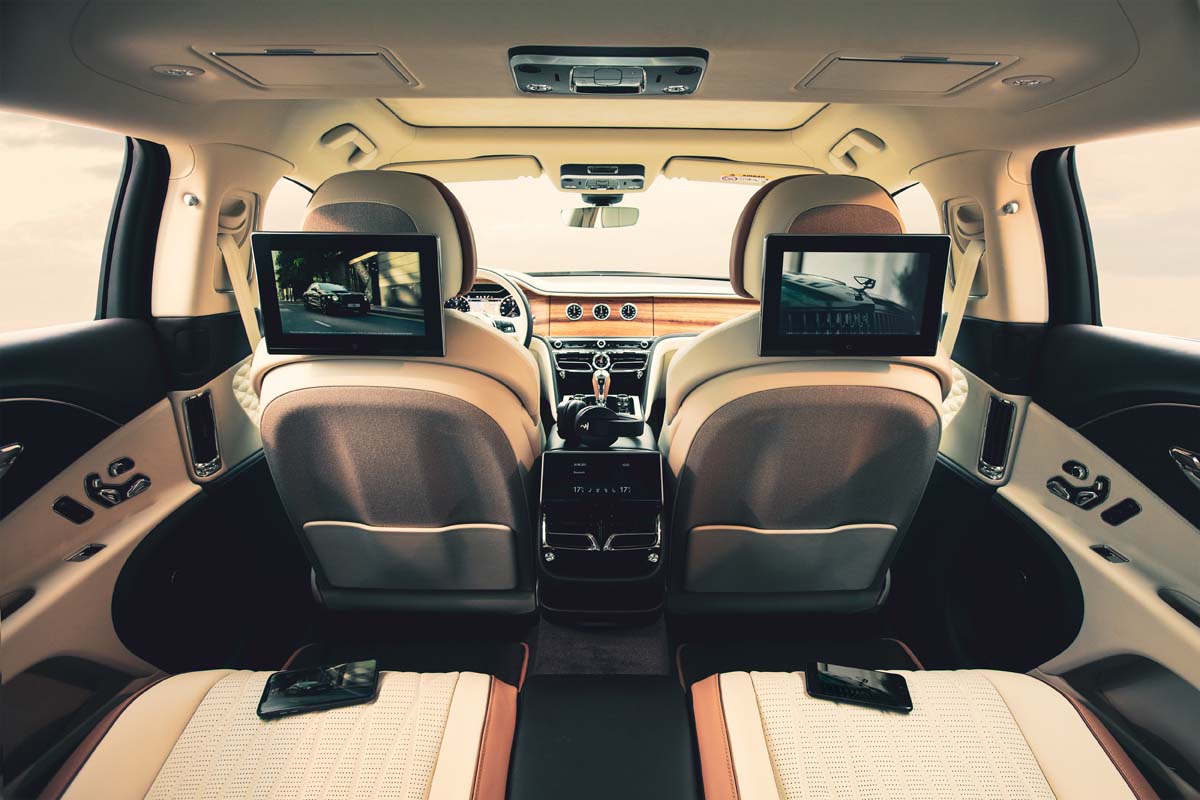 Bentley is introducing a new rear-seat entertainment system for both the Flying Spur and the Bentayga. Bentley Rear Entertainment offers the latest connected technology, combining a highly flexible system with class-leading Naim for Bentley audio already available in both models.

An ingenious ‘bring your own device’ concept allows customers to effortlessly stream content from their own smartphone, computer or tablet directly to the Bentley Rear Entertainment system with the minimum of effort – and without the need to connect by cable.

The exceptionally immersive entertainment experience incorporates two, high-definition 10.1” screens attached to the back of the front seats. The tablets are also removable and use crystal clear graphics with resolution of up to 1920 x 1080 pixels offering perfect visuals on the move.

Sound from the Bentley Rear Entertainment system can be streamed via Bluetooth to either headphones supplied with the car or customers’ personal headphones. Alternatively, sound can be streamed directly to the Flying Spur or Bentayga’s existing and class-leading Naim audio system, which in the Flying Spur features an industry-leading 2,200 Watts of power. Over-The-Air (OTA) software updates ensure customers are future-proofed with the very latest in technology advances.

“The new Bentley Rear Entertainment system blends ease of use with exquisite design and functionality. It allows rear-seat passengers access to an ever-expanding world of entertainment via an exceptionally immersive system – one that represents the very latest in in-car technology. The system delivers digital entertainment services like media and streaming content from nearly all service providers worldwide and turns your car into your own exclusive cinema on the move.

“Bentley’s new ‘bring your own device’ concept works seamlessly with a passenger’s own device, offering the benefits of a high-resolution, 10.1” screen and incredible sound quality. Bentley Rear Entertainment is another example of Bentley helping customers to create their own extraordinary journeys.” 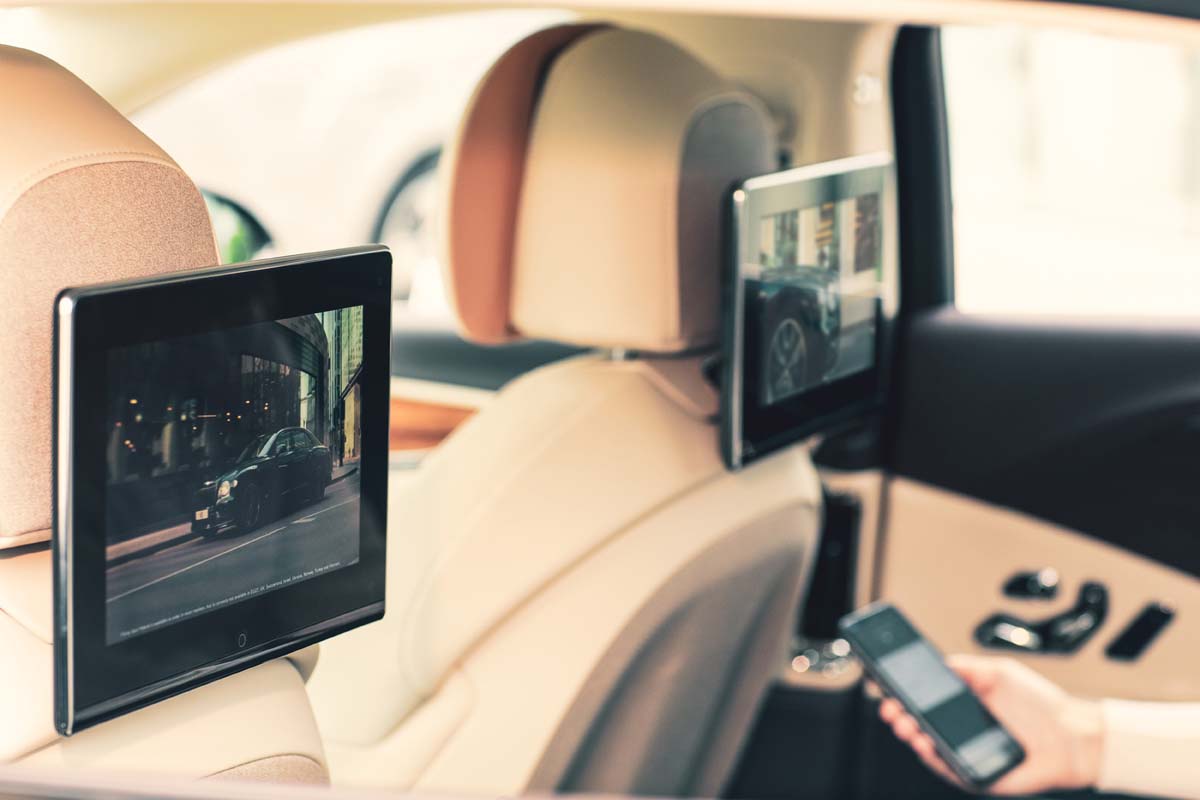 Integrated Technology For Work or Relaxation

Bentley’s expertise in luxury and innovation has combined to create the new rear seat entertainment system. The rear cabins of Bentayga and Flying Spur models are already the ultimate place to work or relax on the move – now  further enhanced with state-of-the-art sound and vision.

Rear seat passengers input content from their mobile device using a variety of methods. Content can be seamlessly cast from both iOS and Android media apps, to either of the Bentley Rear Entertainment screens.

Provided both the device and Bentley Rear Entertainment are configured to the same Wi-Fi network, passengers can then interact with their chosen app e.g. Amazon Prime, Disney+, Youku or Apple TV, content can be viewed on the Bentley system’s touchscreens.

Mirroring from the customer’s device is also now possible with the Bentley Rear Entertainment screens. This useful function mirrors an exact copy of a mobile device screen, including pop-ups, notifications and screen rotation onto the 10.1” screen.

Netflix, the popular entertainment streaming service that offers thousands of film and television programmes, comes pre-installed with Bentley Rear Entertainment. It can therefore be watched without the need to stream from a customer’s device.

Both removable touchscreens are equipped with an HDMI port, which allows the use of media devices such as an Amazon Firestick, or a games console. The latest USB Type C port offers a convenient charging point for customer mobile devices, as well as back-up for software updates. A headphone jack is also provided, as an alternative to Bluetooth connectivity.

The high-resolution screens are touch sensitive, so functions such as volume, brightness, source selection and a handy user guide are easy to operate with the tap of a finger.

Both Bentley Rear Entertainment screens are connected to the rear of the front passenger seats using a bespoke arm mount, which also connects power to the system. The screens and arms can be removed if desired.

The rear of the screen houses a discreet microphone, which monitors audio coming from the Bentayga or Flying Spur’s Naim audio system and ensures this is always synchronised with the media played on the Bentley Rear Entertainment system. 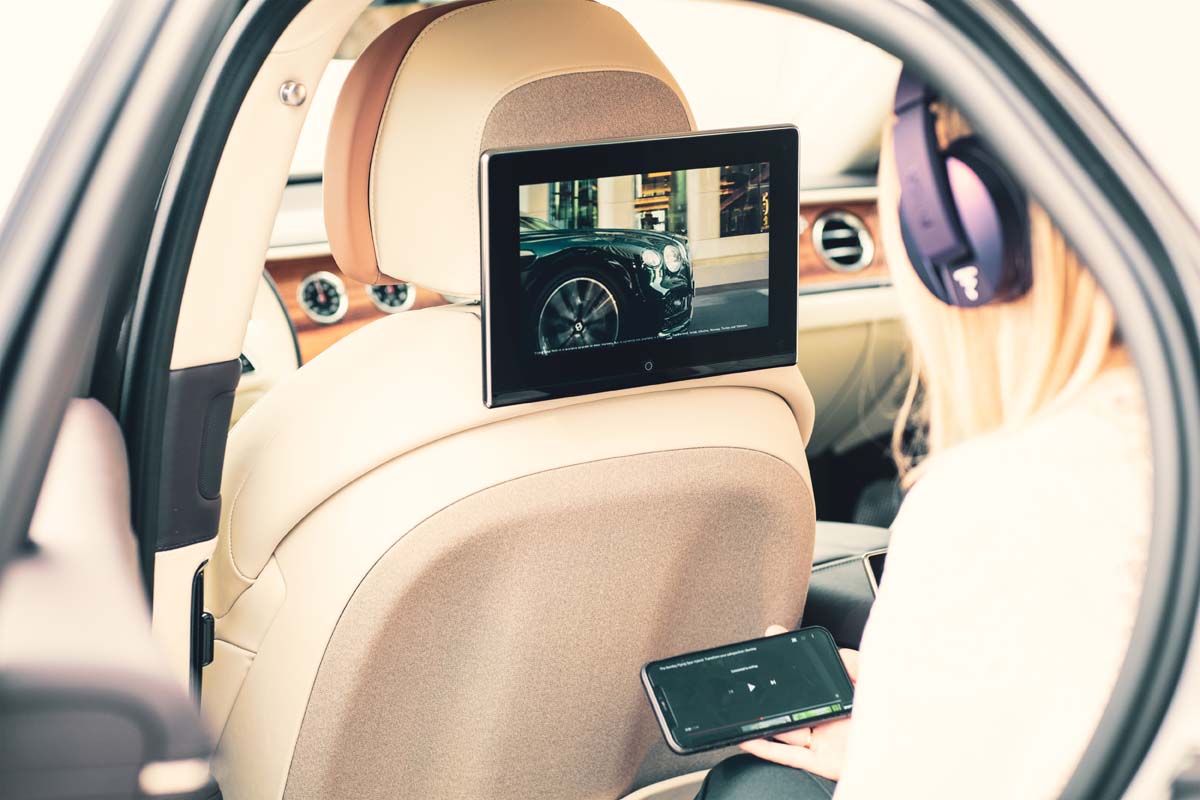 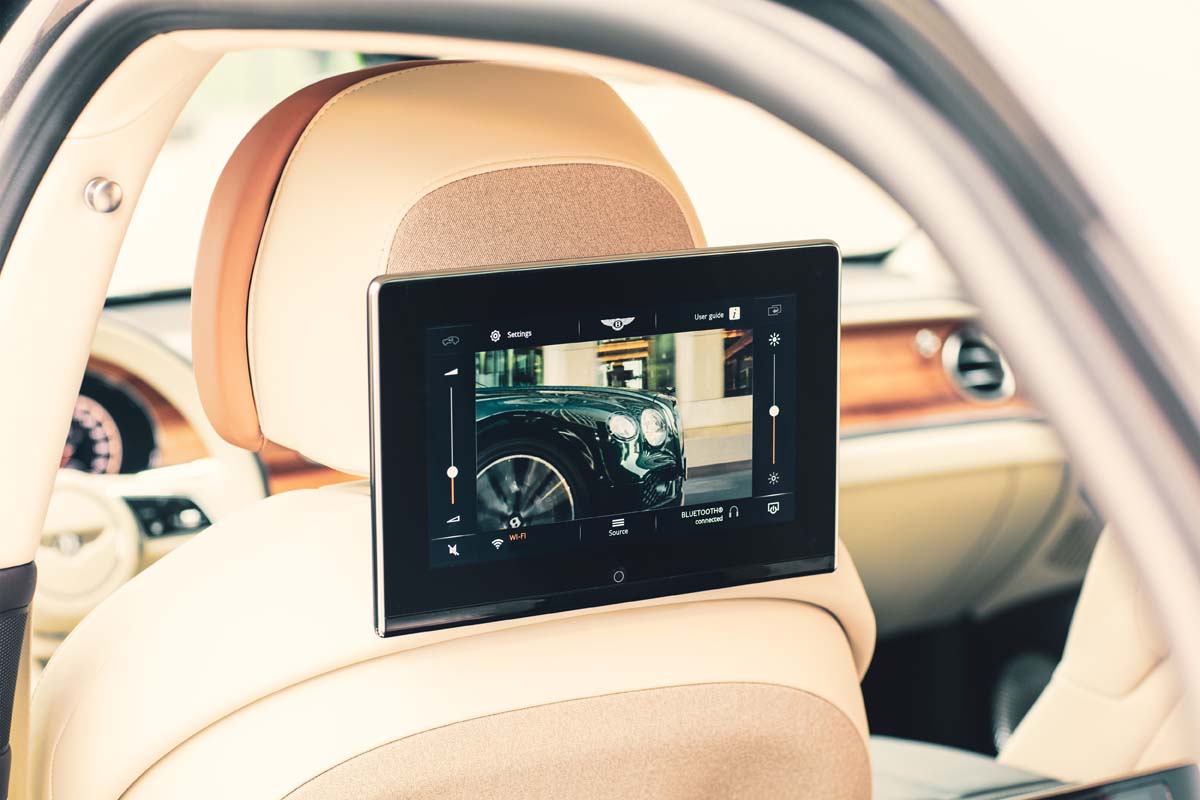 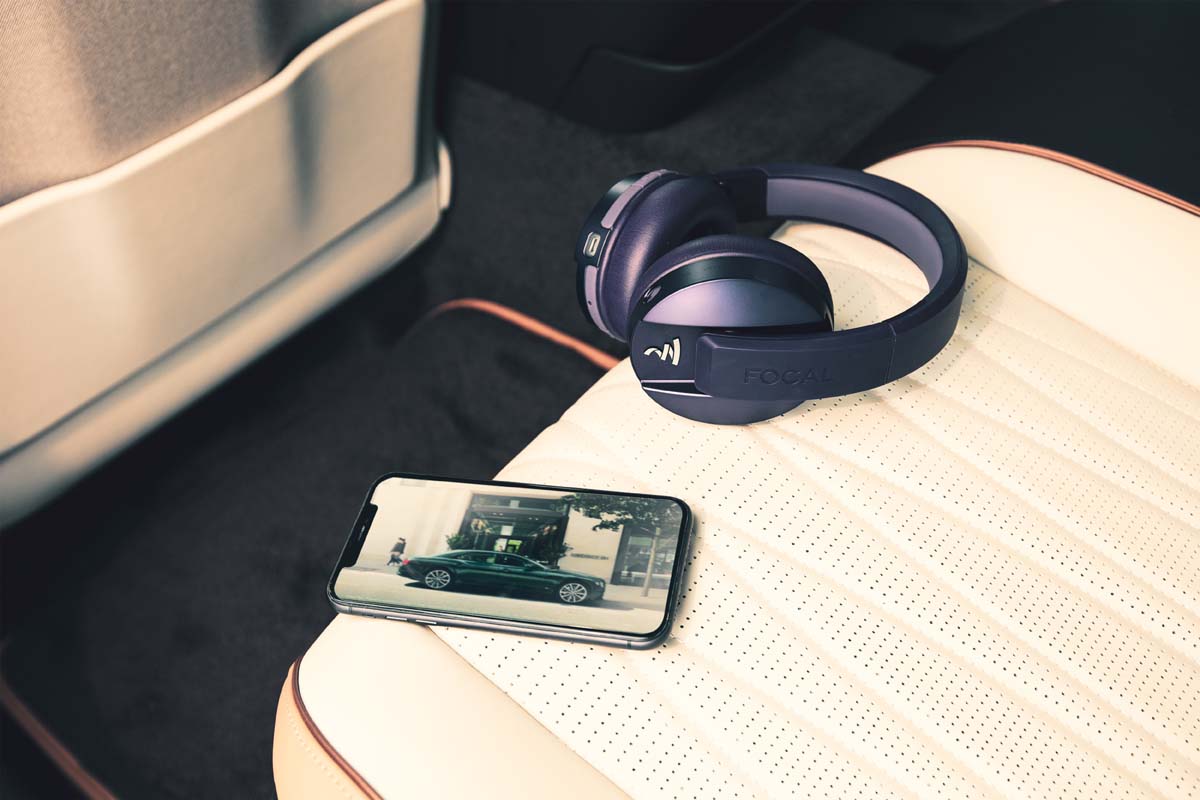 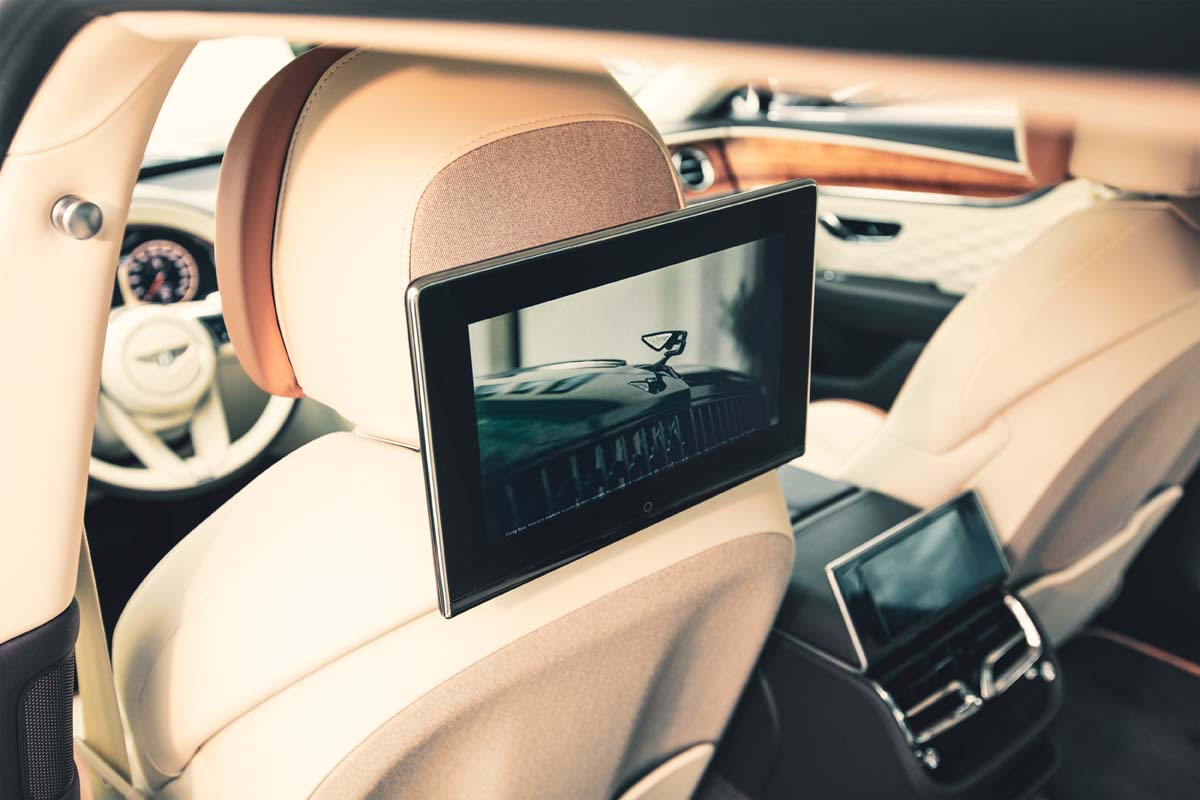 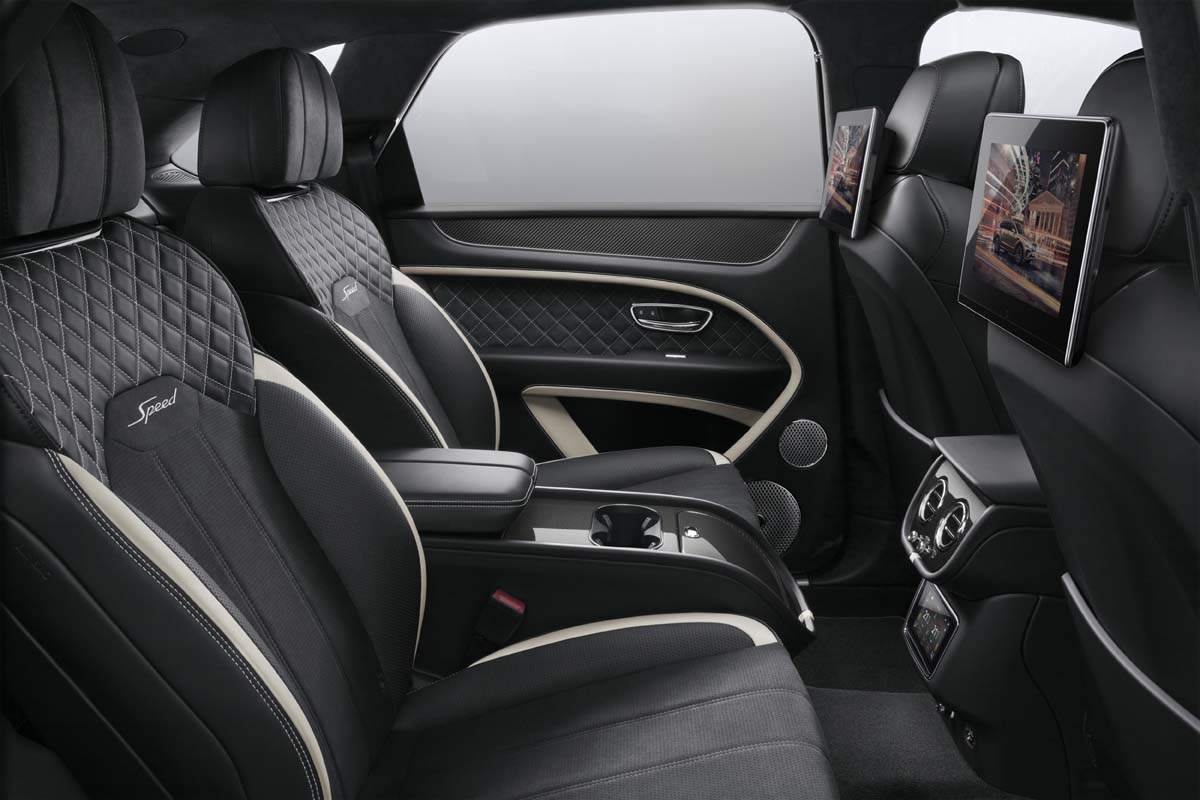