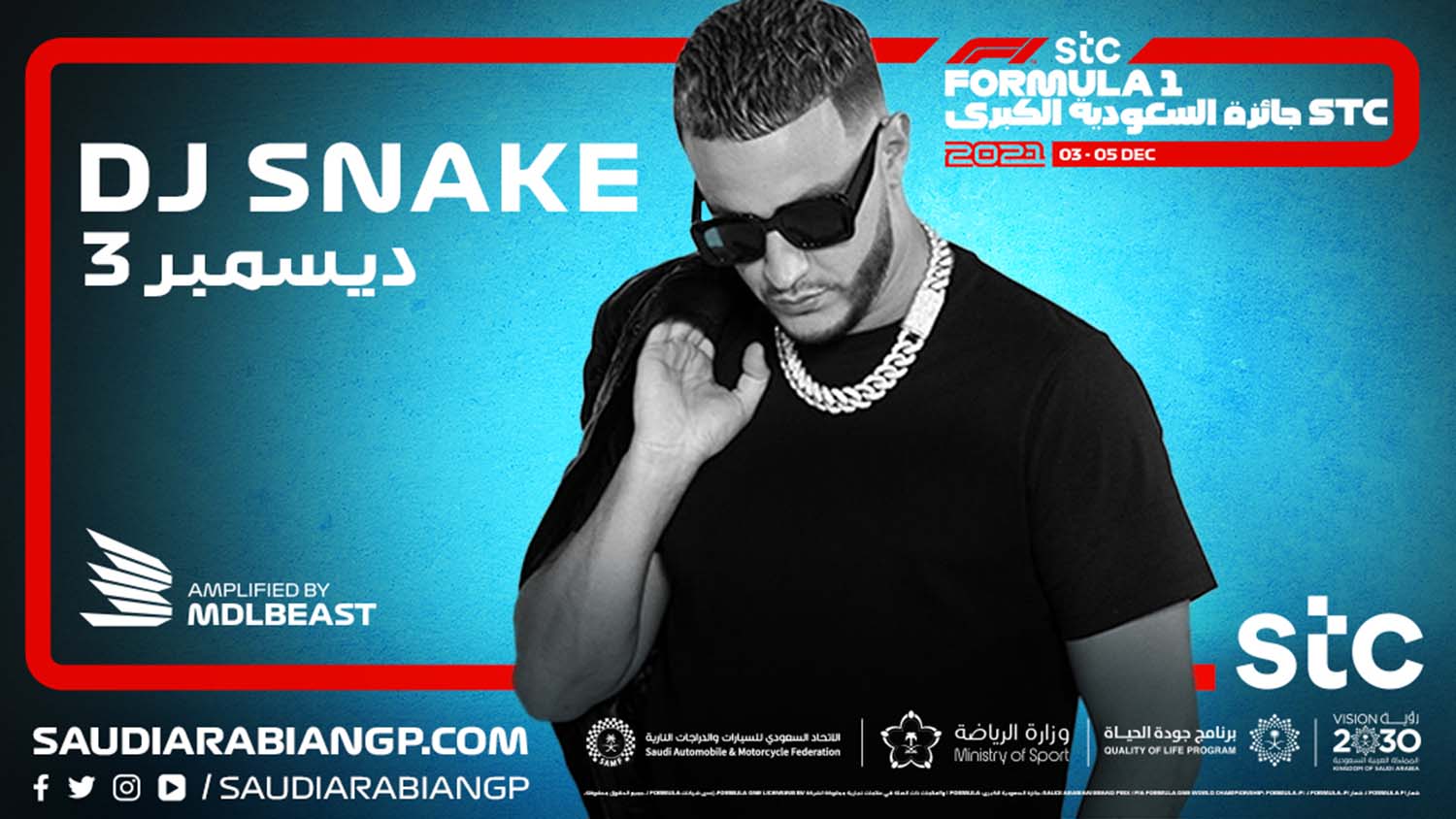 The Saudi Automobile & Motorcycle Federation (SAMF) – Promoter of the FORMULA 1 STC SAUDI ARABIAN GRAND PRIX 2021 – has today confirmed that world-renowned DJ Snake has been added to the Friday Night headlining show at the inaugural F1® race in Jeddah on Friday, December 3rd.

He joins multi-million selling Egyptian artist, Mohamed Hamaki on the bill for the first of three nightly concerts to be staged across the weekend of Saudi Arabia’s first ever Formula 1® Grand Prix.

The news that DJ Snake is joining the celebrations in Jeddah in a few weeks’ time, is just the latest amazing addition to the incredible weekend entertainment schedule at the Jeddah Corniche Circuit. It follows the confirmation that global music icons & multi-million selling superstars Justin Bieber, A$AP Rocky & David Guetta will close out the inaugural F1® race in Jeddah on Sunday 5th December a day after multi-award-winning singer, songwriter & dancer, Jason Derulo and iconic DJ, Tiësto will headline the post-Qualifying concert on Saturday 4th December.

DJ Snake made his full-length debut with Encore, a 2016 album that reached #1 on Billboard’s Top Dance/Electronic Albums chart and debuted in the top ten around the world. Since scoring his first #1 with the four-times platinum Let Me Love You, ft. Justin Bieber, DJ Snake has triumphed with such colossal hits as You Know You Like It (with AlunaGeorge) Lean On (with Major Lazer, featuring MØ) and Taki Taki ft. Selena Gomez, Ozuna & Cardi B.

With its title translating to ‘the freedom to do whatever one chooses”, his sophomore album Carte Blanche arrived in July 2019 and shot to #1 on Billboard’s US Top Dance/Electronic Albums chart, in addition to reaching the top 50 on the Billboard 200.

Thanks to the tremendous success of Let Me Love You, Lean On and Taki Taki, DJ Snake now holds the distinction of being one of only two dance artists in the world to have three songs amass more than a billion streams on Spotify.

The concert will take place after the first ever Free Practice sessions at the circuit have finished and F1® drivers have had their first experience of the longest and fastest street circuit in Formula 1®.

All ticket holders will have free access to the concerts.

In addition to enjoying the pinnacle of motorsport and nightly concerts by the some of the biggest acts in world music today, ticket holders will also be able to experience the hugely popular Formula 2 series, renowned as a breeding ground for F1® stars and champions, throughout the weekend on-track as well as a series of interactive entertainment activities taking pace across the circuit over the course of the three days of the FORMULA 1 STC SAUDI ARABIAN GRAND PRIX 2021 – all for the price of one ticket!

Fans can currently choose from 3 Day and 1 Day grandstand, premium hospitality and General Admission tickets and can look forward to a comprehensive schedule of sport and entertainment from Friday 3rd until Sunday 5th December at the brand-new Jeddah Corniche Circuit.