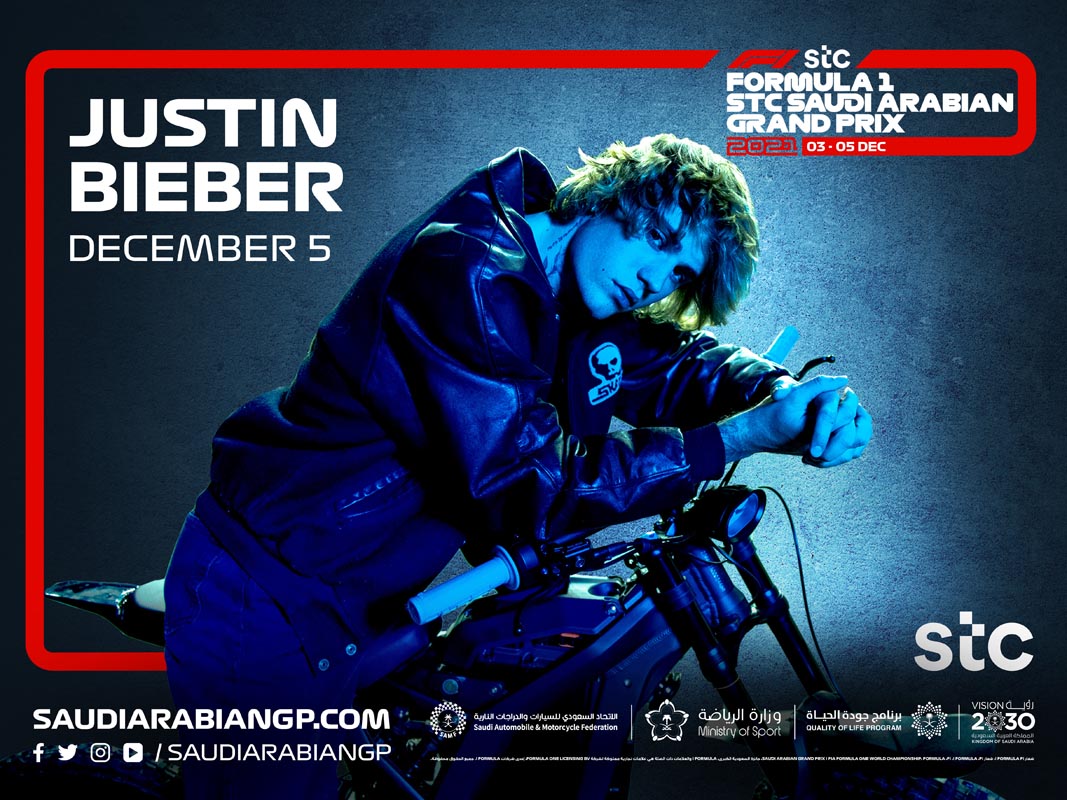 Each of these star-studded performances – two of three mega-concerts set to be staged across each day of Saudi Arabia’s debut F1 weekend – will take place on the Main Stage in the Fanzone of the Jeddah Corniche Circuit, F1’s newest, longest and fastest street circuit right after the first ever Formula 1® Qualifying and Race in Jeddah has been concluded on Saturday and Sunday respectively.

To celebrate these dazzling additions to the weekend schedule, single-day grandstand tickets will also be made available to fans in addition to the 3-day weekend packages. For more information on how to purchase your ticket, please follow this link.

All ticket holders will have free access to the concerts!

In addition to enjoying the pinnacle of motorsport and nightly concerts by some of the biggest acts in world music, ticket holders will also be able to experience the hugely popular Formula 2 series, renowned as a breeding ground for F1®  stars and champions, throughout the weekend on-track as well as a series of interactive entertainment activities taking place across the circuit over the course of the three days of the FORMULA 1 STC SAUDI ARABIAN GRAND PRIX 2021 – all for the price of one ticket!

Spectators can therefore look forward to a comprehensive schedule of sport and entertainment from Friday 3rd until Sunday 5th December at the brand-new Jeddah Corniche Circuit.

HRH Prince Khalid bin Sultan Al-Abdullah Al-Faisal, Chairman of the Saudi Automobile & Motorcycle Federation was thrilled to confirm the line-up for the Sunday night show: “The FORMULA 1 STC SAUDI ARABIAN GRAND PRIX 2021 is set to be the biggest and best sporting and entertainment event ever hosted in the Kingdom and as such, it was important that we deliver a weekend of entertainment unlike any that has been seen before in Saudi Arabia. By confirming Justin Bieber, A$AP Rocky & David Guetta as the headline acts to close out the inaugural Saudi Arabian F1 weekend – a day after Jason Derulo and Tiësto deliver their extraordinary live shows – we believe we have achieved this goal. These global megastars are rightly considered to be some of the most electrifying & influential voices in music and we can’t wait to see them bring their incredible live performances to our Main Stage in December.

After each day of breath-taking racing on track, these spectacular concerts will be the perfect way for attending fans to release their adrenaline and celebrate the arrival of F1 in Saudi Arabia in style. Don’t miss out, get your tickets now and we’ll see you in Jeddah very soon!” 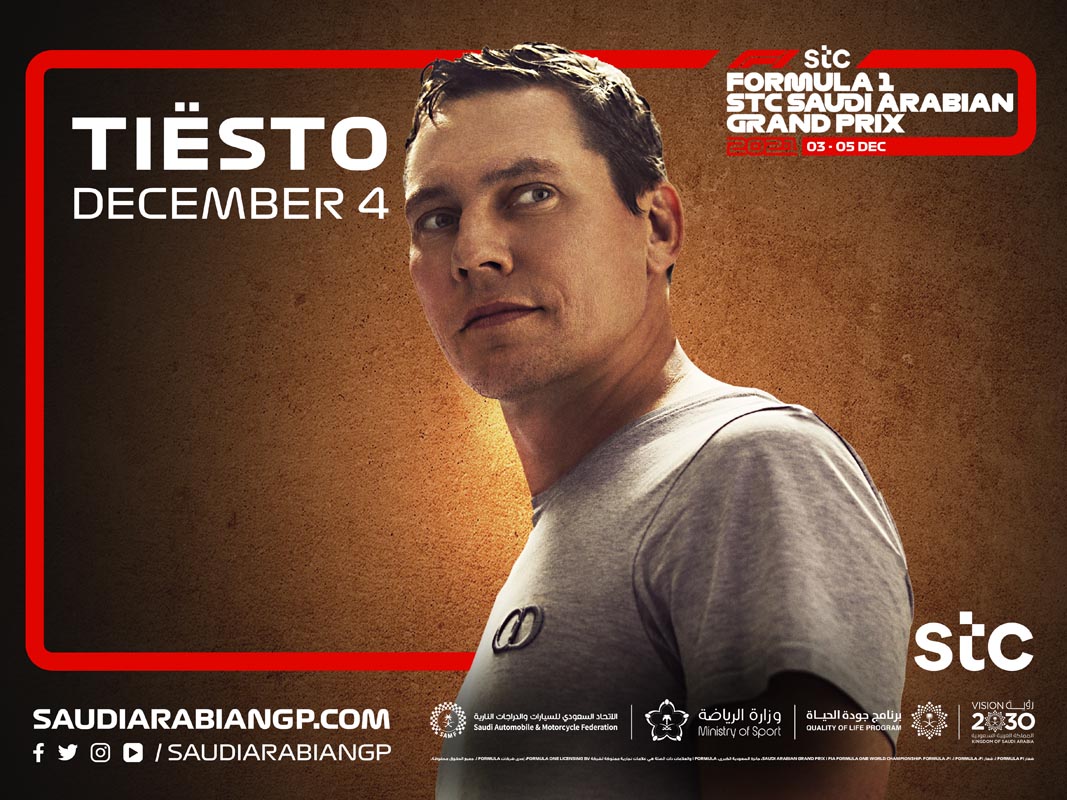 Forward-thinking, genre-defying, and massively creative, Jason Derulo has staked his claim as one of the most dynamic forces on the global pop landscape. Since breaking through with his five-times-platinum single “Whatcha Say” and selling more than 200 million records worldwide, the award-winning singer/songwriter has turned out an unstoppable run of immediately iconic hits and collaborated with many of music’s greatest trailblazers, not to mention all-time legends like Stevie Wonder. His latest triumphs include emerging as one of TikTok’s most influential users, boasting the 11th overall biggest account on the video-sharing platform and the 4th most followed male. He continues to expand into unexpected territory by partnering with Z2 Comics to launch his own graphic novel. Having signed to Atlantic Records in early 2021, Derulo is now embarking on a bold new era in his ever-evolving artistry, proving his incredible power to stay ahead of the curve while perfecting the magic of making unforgettable pop songs.

Now at work on his highly anticipated fifth album—and first full-length since 2015’s chart-topping Everything Is 4—Derulo recently delivered a series of smash singles while operating as an independent artist. Those songs include “Lifestyle” feat. Adam Levine (a wildly catchy track), “Take You Dancing” (a pandemic-era love song that’s inspired over a half-million videos on TikTok), and the double-platinum “Savage Love (Laxed – Siren Beat)”—a collaboration with New Zealand-based producer Jawsh 685 that hit No. 1 on Top 40 radio, with its official BTS remix reaching the top slot on Billboard’s Hot 100.

Tiësto is a Grammy® Award-winning, platinum-certified, international icon. The DJ and producer is the only artist to ever hold the titles of “The Greatest DJ of All Time” courtesy of Mixmag, “#1 DJ” according to Rolling Stone, and “The Godfather of EDM,” as proclaimed by Billboard. From his underground dance floor bangers to his high-profile Las Vegas residency and crossover success, Tiësto created the blueprint that defines what it means to be a success in today’s dance music world.

In Tiësto’s true fashion, he continues expand across genres, always evolving his craft. With over 36 million albums sold, 8 billion cumulative streams, and a social platform with an audience exceeding 30 million fans spanning the globe, he continues to revolutionize the dance music landscape. Tiësto’s first release since signing with Atlantic Records, “The Business” has dominated airplay and charts worldwide since its September 2020 release, garnering over 1 billion streams to date. It has also held a steady position on Apple & Spotify’s “Today’s Top Hits” & “Today’s Hits” playlists and hit #1 at US Dance Radio. “The Business” is certified Platinum in 15 countries and gold in 8 countries and has held a place on the Top 10 official singles chart in 10 countries as well as Top 50 on Spotify in 31 countries.

Tiësto made history with his latest single “Don’t Be Shy” with Karol G, which marked the first English song ever for Karol G, and the first Latin Artist collaboration for Tiësto. Stay tuned for more new music from Tiësto later this year.

With over 86 billion career streams and over 78 million albums sold worldwide, Justin Bieber continues to reign as one of the biggest artists in the world. Bieber is the #1 artist on Spotify with over 75 million monthly listeners!

Championed by fellow rapper Drake and The Fader magazine before he released his first full-length project, self-proclaimed hood outcast A$AP Rocky became one of the biggest breakout stars of the 2010s. When the decade was over, the rapper had a pair of number one albums with Long.Live.A$AP (2013) and At.Long.Last.A$AP (2015), and a Top Ten entry with third LP Testing (2018). These full-lengths were promoted with some of the most popular songs of the era, most notably the Grammy-nominated Top Ten pop hit “Fuckin’ Problems,” plus seven additional singles that went either platinum or multi-platinum. Supported by A$AP Mob and eager collaborators ranging from Kendrick Lamar and 2 Chainz to Skepta and Skrillex, Rocky himself has assisted with hits headlined by Selena Gomez (“Good for You”), G-Eazy (“No Limit”), and Famous Dex (“Pick It Up”).

A$AP Rocky, born Rakim Athelaston Mayers and also known as Lord Flacko, gave up slinging drugs in his native Harlem and started rapping after he moved to Elmwood Park, New Jersey. By the time he completed his GED, he had attained underground clout for tracks such as “Peso and Trilla,” promising cuts bearing the boisterous spirit of Harlem’s Diplomats and the casual swagger of Houston’s UGK as influences. In 2011, Rocky released his first full-length project, the street album Live.Love.A$AP. After he signed a reportedly large RCA deal — one that also enabled him to establish the A$AP Worldwide label with fellow A$AP Mob member A$AP Yams — the album was re-released in February 2012. Still without an official debut album, the rapper rounded out the year with a nomination for the BBC Sound of 2012 poll, played Lana Del Rey’s husband in the singer’s “National Anthem” video, and landed a spot in a television commercial for the popular video game FIFA Soccer 13. He was also featured on a remix of Rihanna’s “Cockiness (I Love It),” and appeared on a slew of other tracks, including ScHoolboy Q’s gold-certified “Hands on the Wheel.”

This all primed Rocky for true takeoff with his official debut album, Long.Live.A$AP. Released in January 2013, it topped the Billboard 200. Its biggest single, “Fuckin’ Problems” (featuring Kendrick Lamar, Drake, and 2 Chainz), peaked at number eight on the Hot 100, went multi-platinum, and was nominated for a Grammy in the category of Best Rap Song. The second single, “Wild for the Night” (with Skrillex and Birdy Nam Nam), likewise went multi-platinum. It was followed in May 2015 by At.Long.Last.A$AP. Executive produced by Danger Mouse and Juicy J, it became Rocky’s second number one LP, supported with a trio of platinum hits: “Lord Pretty Flacko Jodye 2 (LPFJ2),” “Everyday” (featuring Rod Stewart, Miguel, and Mark Ronson), and “LSD” (the video of which was up for a Grammy).

Over the next two years, Rocky was very much in demand as a featured collaborator. Among the singles on which he appeared were Selena Gomez’s “Good for You” and G-Eazy’s “No Limit” — both Top Ten pop hits — as well as the Black Eyed Peas’ “Where Is the Love?,” Mura Masa’s “Love Sick,” and Famous Dex’s “Pick It Up.” In May 2018, following an appearance on the Uncle Drew soundtrack, Rocky returned with his third solo album, Testing, which hit the Billboard 200 at number four. “A$AP Forever” and “Praise the Lord (Da Shine),” respectively featuring Moby and Skepta, became Rocky’s seventh and eighth platinum-certified singles as a headliner. He finished out the decade with a handful of featured appearances and singles, including the charting “Babushka Boi.” ~ Jason Lymangrover & Andy Kellman

In 2020, David Guetta hosted a series of livestreams titled United At Home which saw him raise over $1.7 million in COVID-19 relief while breaking a Guinness World Record for the most watched DJ set on Facebook. The shows hosted from Miami, New York and the Louvre in Paris attracted over 75 million viewers. Last year also saw him being crowned as The World’s No.1 DJ, winning DJ Mag’s annual Top 100 DJs poll for the second time – almost a decade after he first took the No.1 spot in 2011. “When Love Takes Over,” the first single of his 2009 album ‘One Love’, hit #1 in the UK, the Guetta- produced Black Eyed Peas song “I Gotta Feeling” became a worldwide hit, topping the charts in 17 countries. Over the decade since, Guetta’s success has been off the charts. Globally, he’s racked up over 50 million record sales, whereas his total number of streams is over 10 billion.

He has received numerous Platinum and Gold certifications and was voted the world’s #1 DJ twice, he was named ‘EDM Power Player’ by Billboard and won two Grammy Awards out of six nominations. Besides his hard-won DJ skills, he is prolific in the studio, and works with artists like Sia, Justin Bieber, Rihanna, Lady Gaga, Nicki Minaj, Anne-Marie, Ariana Grande, J Balvin, Kid Cudi, Snoop Dogg, Usher, John Legend, Madonna, Avicii, and Akon, for starters. He’s made dance music reach the mainstream, fused urban, electronic and pop music into new popular genres, and produced some of the decades’ biggest hits like ’Titanium’, ‘Memories’, ‘Hey Mama’, ‘Say My Name’, and ‘Sexy Bitch’ to name a few.

Not only prolific in the world of pop music, David Guetta also remains a spearhead of the electronic dance community and started the new Future Rave sound movement in late 2019. The sound which DJs and fans alike call ‘The future of EDM’ has amassed more than 140 million combined streams. Meanwhile, David reserves his darkest and deepest tracks for his underground alias Jack Back which represents David’s roots in the club scene. For over 20 years now, the DJ has managed to stay on top of the game. David Guetta is surely not done with showing the world his incredible sound and it is safe to say that at this stage in his career, David knows exactly where to take it next. 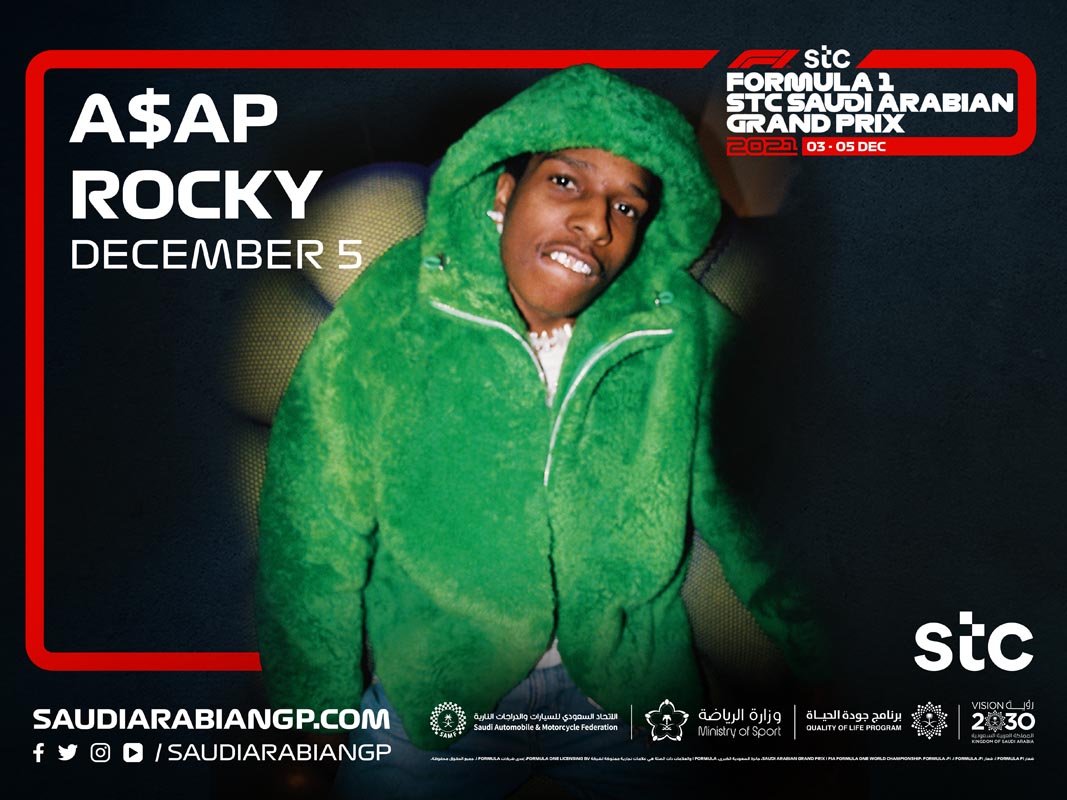 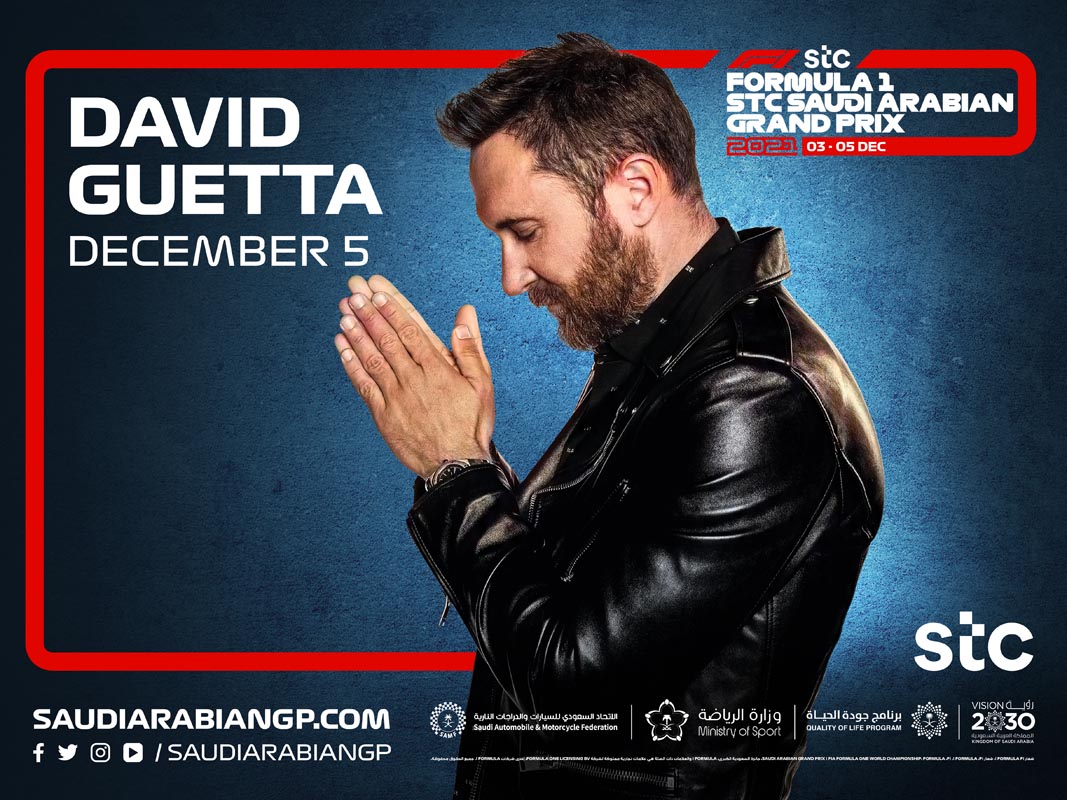 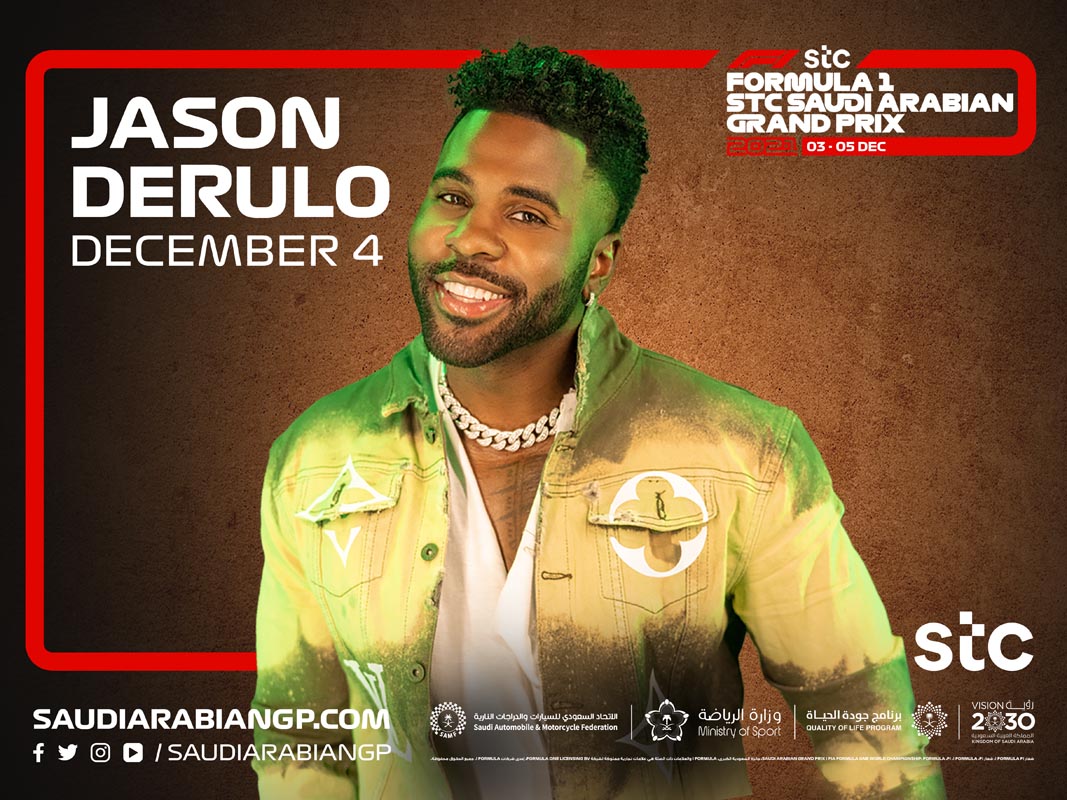