Al-Saif, Abu Aishah And Al-Khulaifi Lead After Leg One Of The Jordan Baja 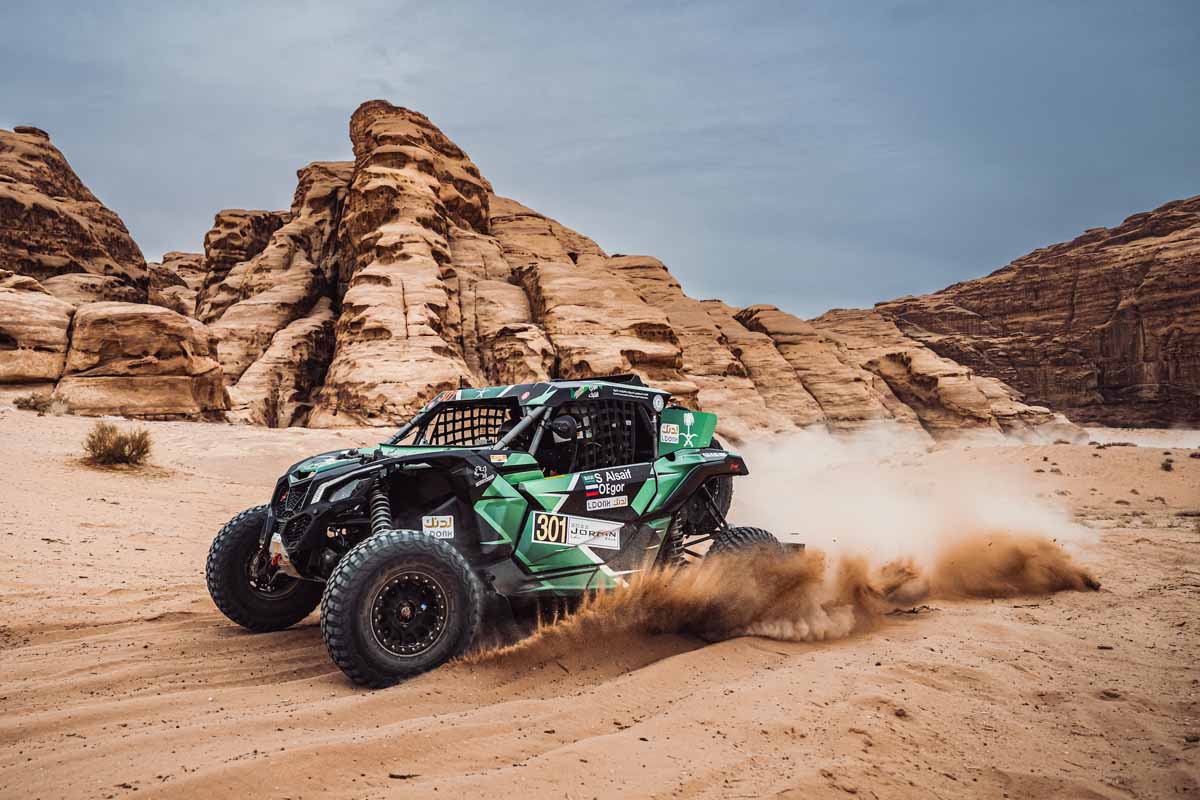 Saleh Al-Saif, Jordan’s Abdullah Abu Aishah and Abdulmajeed Al-Khulaifi led their respective car, motorcycle and quad categories at the Jordan Baja, after the first two competitive sections of 232.71km and 81.97km through Wadi Rum on Friday.

The counting round of both the FIA World Cup for Cross-Country Bajas and the FIM Bajas World Cup delivered drama from the start in one of the most spectacular locations on earth, with pre-rally favourite Yazeed Al-Rajhi hitting early technical troubles and losing around 80 minutes in the first section and a T3 Can-Am Maverick leading outright at the end of the day.

Saleh Al-Saif was comfortably the fastest driver through the first section in his Can-Am and the Saudi and his Russian co-driver Egor Okhotnikov stayed clear of trouble in the second one to storm into a 6min 43.8sec overnight lead over T4 front-runner Kees Koolen.

Al-Saif said: “We stayed clear of any problems and we kept a good focus and our times were good. We look forward to staying at the top. I love it here. It is similar to the regions of Saudi Arabia where I race.”

Miroslav Zapletal admitted that the navigation had been difficult but the experienced Czech guided his Ford F-150 to fourth overall behind Kuwait’s third-placed Meshari Al-Thefiri.  Young Aliyyah Koloc came home in fifth in her Buggyra ZM Racing Can-Am and Fernando Alvarez held eighth overall and fourth in T3 at the end of the day, the Spaniard finishing behind Russia’s Armen Puzian and Saudi’s Saeed Al-Mouri.

Dania Akeel is the defending FIA T3 World Champion and she completed the day in ninth place. The 33-year-old said: “It was a lot of fun. I used both of my tyres in the first part but I am really pleased with how the day went.”

Al-Rajhi finished a drama-filled day in 12th place after his early woes and only 1hr 03min 51.8sec off the outright lead. “We broke the back of the car. We stopped for two hours to fix it and lost around 80 minutes on the stage. We are still going and we are enjoying it.”

Abu Aishah and Mohammed Al-Balooshi rode together for long periods in the motorcycle section, but the local rider took advantage of being able to follow the Emirati’s tracks and squeezed into a slender overnight lead. “Today was a long day, 315km,” said Abu Aishah. “We have 150km tomorrow in Araba. I will keep pushing until the end.”

“This is normal when you open,” said Al-Balooshi. “It’s quite challenging with the navigation. I believe Abdullah caught me after around 70 or 80km and then we stayed together the whole race. I kept opening. He did good with his part. Both of us are going for the win. I always give 100%. As long as I know I give 100%, I am happy.”

Martin Chalmers came home in fourth behind Kuwait’s Abdullah Al-Shatti. The Australian started building bikes and racing when he moved to Qatar. At the finish, he said: “That was some of the best riding I have ever done and also some of the most challenging. Navigation was very tough. Fortunately we (Al-Shatti) stuck together but we had to turn around a few times. I couldn’t appreciate the scenery though, unfortunately.”

Multiple Hail International Rally winner Abdulmajeed Al-Khulaifi held a massive lead in the quad section on his Yamaha. He said: “What a rally today..! I have been in Dakar and this is like Dakar stages, motorcyclists facing a hard and unique stage with sand and mountains. It was tough but thanks god that we finished.”

Abdulhalem Al-Mogheera set the unofficial quickest time of 3hr 49min 12sec through the opening 232.71km selective section in Wadi Rum and moved ahead in the motorcycle category. The Saudi beat Abu Aishah by 1min 17sec, two-time winner Al-Balooshi by 3min 11sec and Abdullah Al-Shatti by 3min 22sec. Al-Khulaifi was in control in the quads and eked out a comfortable lead over Hani Al-Noumesi.

Yazeed Al-Rajhi was the firm favourite to win the FIA section, but the Saudi hit trouble with rear wheel issues and was badly delayed. Al-Saif was the man in form and the Can-Am driver stormed to the stage win, beating Zapletal by 12min 18sec to take command of the Baja. Meshari Al-Thefiri came home in second place and first in T4, but trailed Al-Saif by 8min 06sec. Koolen was third.

Competitors then tackled the shorter second stage and Abu Aishah rode close to Al-Balooshi, benefitting from the Emirati opening the road, to snatch an overnight lead of 1min 40.6sec.

Al-Saif drove without risks through the second section to confirm the lead in the car category, as a resurgent Al-Rajhi claimed the stage win and climbed up the leader board.

Tomorrow (Saturday), competitors visit Wadi Araba for the first time on the Jordan Baja. The stunning geographical feature runs from the Gulf of Aqaba to the southern shores of the Dead Sea and will see riders and drivers tackle a 150.89km selective section. The first motorcycle is duo on stage at 07.55hrs with the leading car following at 09.25hrs. 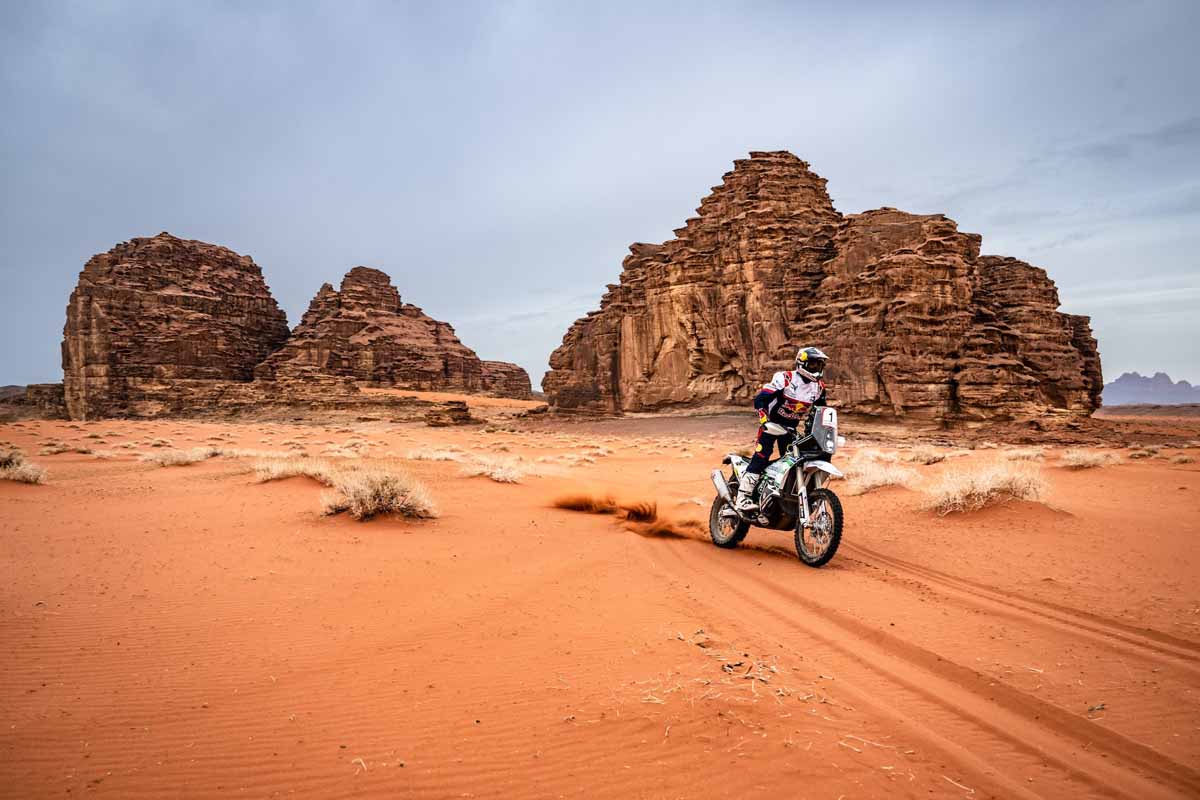 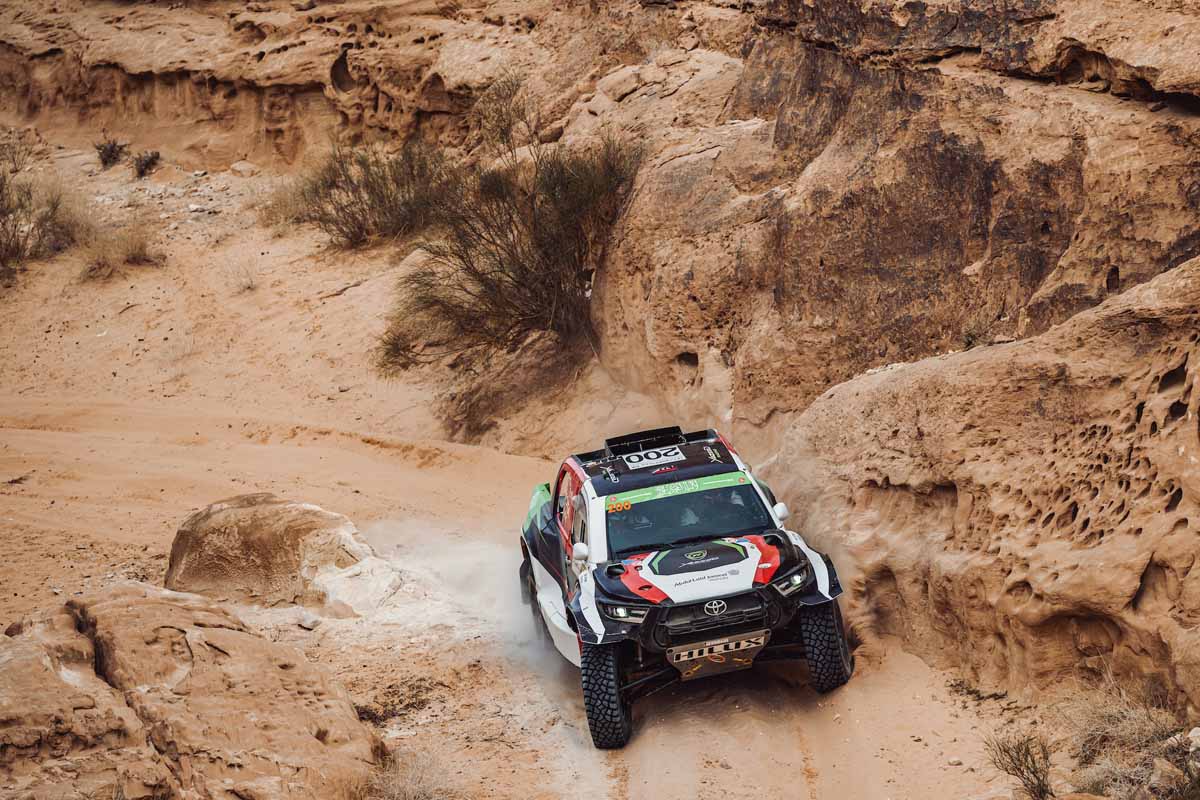 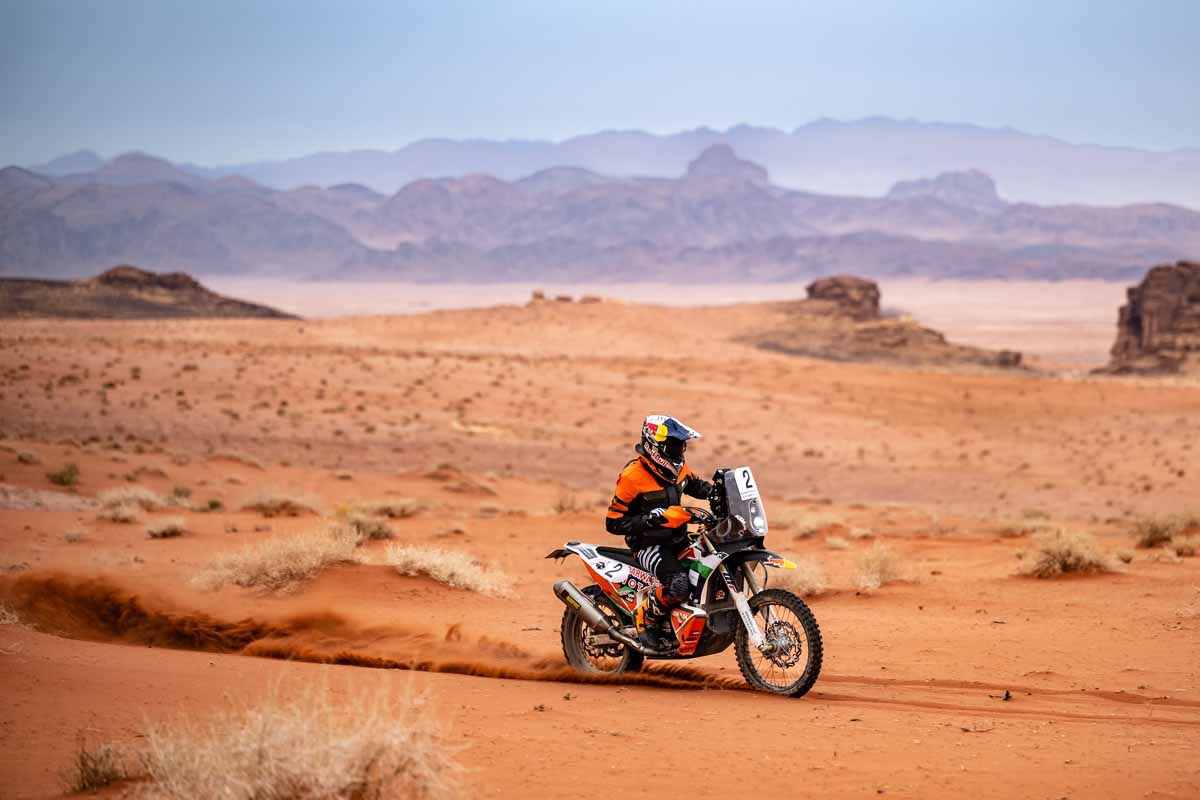 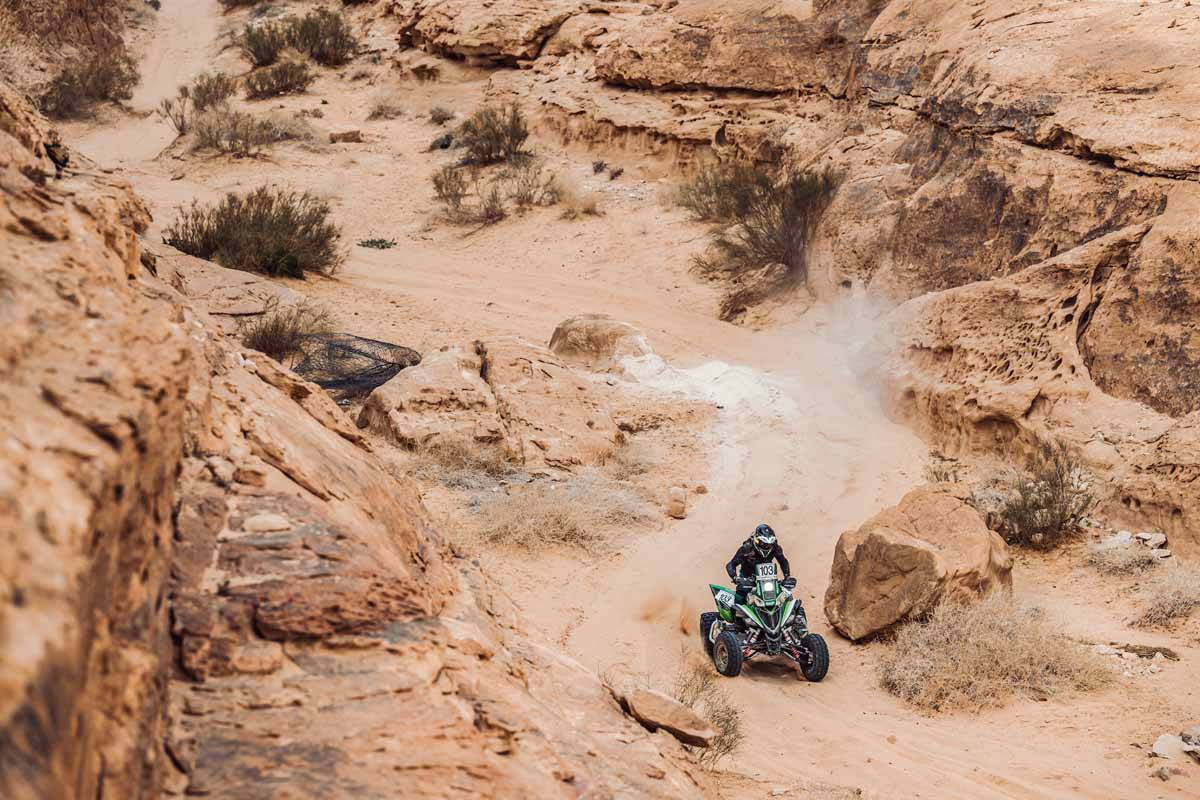 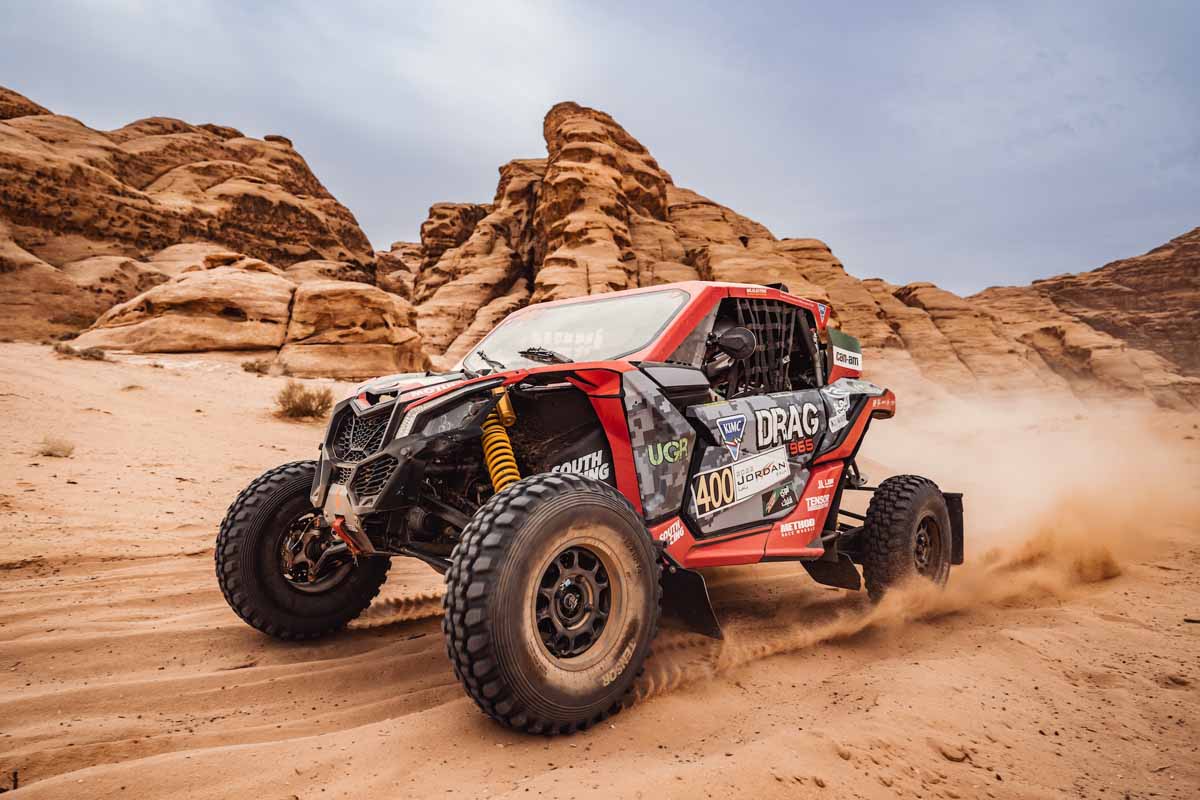 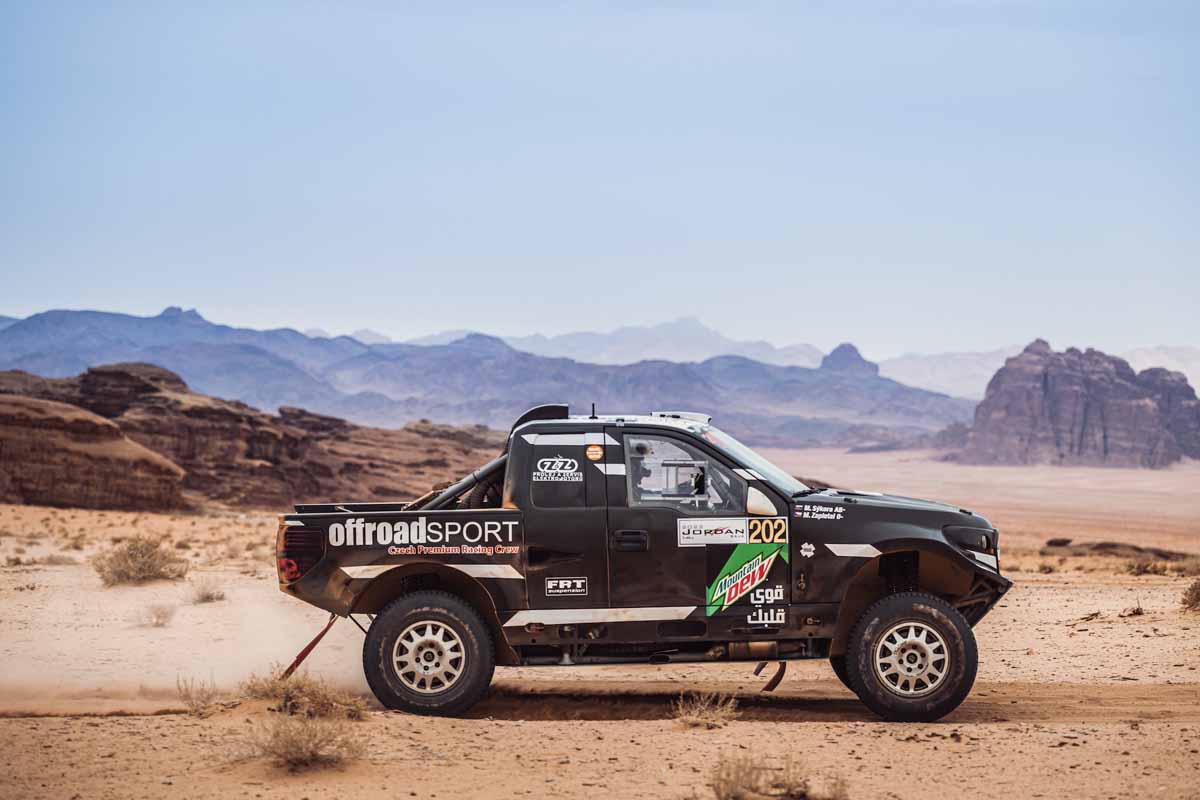