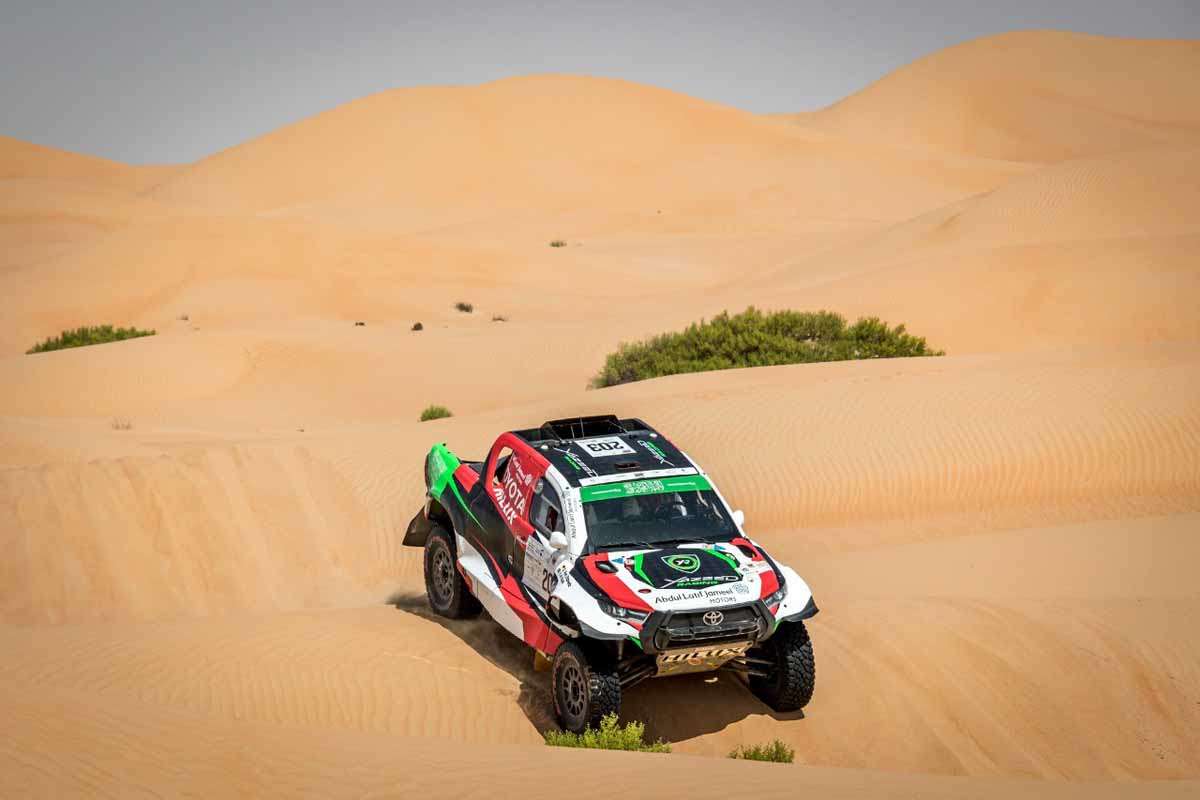 The Abu Dhabi Desert Challenge lived up to its reputation as one of the world’s most intriguing rallies on an opening day of high drama which brought vastly contrasting fortunes for some of the sport’s biggest names, while two local heroes stepped into the spotlight.

Defending champion Nasser Al Attiyah, who set off in search of his third cars triumph in the event, was soon returning to the start after damaging the front right wheel of his Toyota Hilux, with his victory hopes ruined.

That ended when Loeb’s Prodrive Hunter was halted for almost 90 minutes by a broken drive shaft before resuming, leaving Peterhansel and Edouard Boulanger with breathing space in their Audi RS Q e-tron.

They finished with a 9 mins 30 secs advantage over Saudi Arabia’s Yazeed Al Rajhi in a Toyota Hilux, with Czech driver Martin Prokop, the 2018 champion, 14 mins 59 secs off the lead in third in a Ford Raptor.

Poland’s Jakub Przygonski had been comfortably holding a top three spot before his Mini John Cooper Works Buggy lost time when it became stuck in the dunes, dropping him to fourth. Mathieu Serradori in a Century CR6 and Stephane Schott in another Mini buggy completed the top six.

The 31st Abu Dhabi Desert Challenge is brimming also with the world’s top factory team riders, but they could not subdue Dubai resident and privateer Michael Docherty, who produced a brilliant performance as he swept into the outright lead on his Rally 2 Husqvarna. 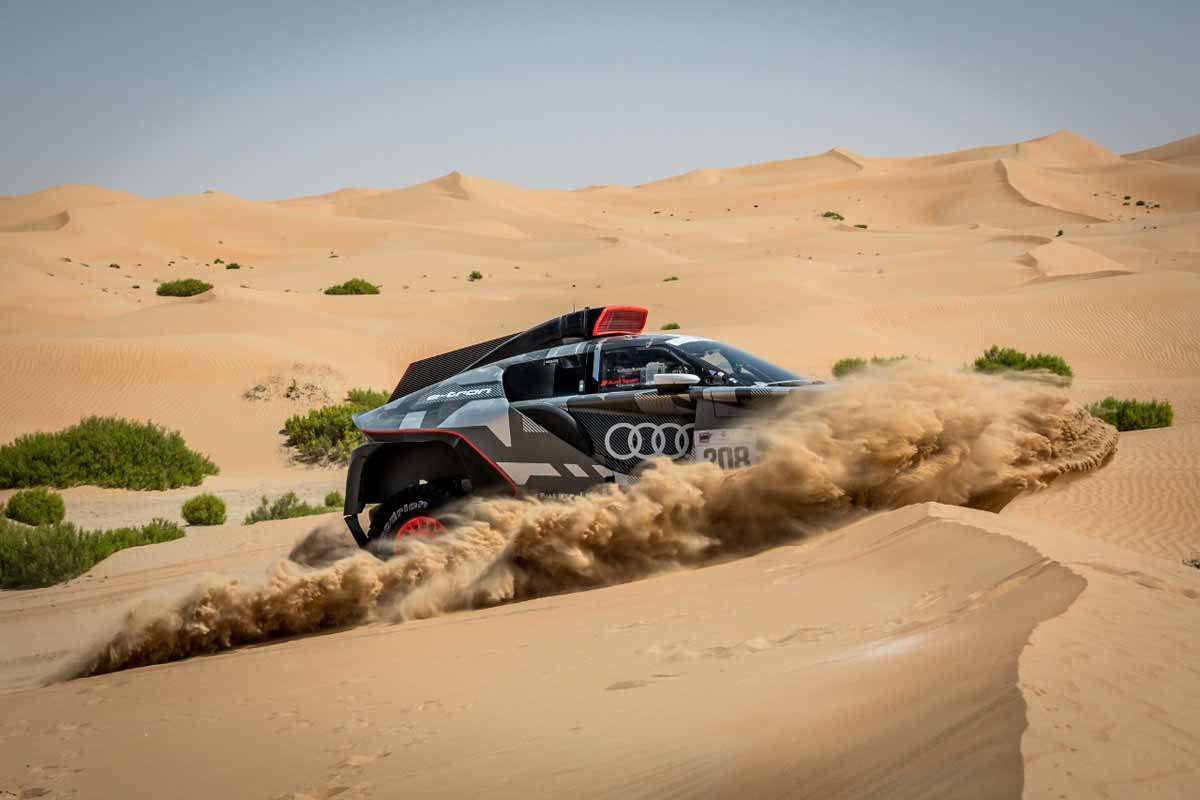 After winning the previous day’s qualifier, Docherty was fastest again for a good chunk of today’s leg as he battled with double bikes champion in Abu Dhabi, Sam Sunderland, the World Rally-Raid series leader and eventual stage winner.

The South African-born rider ultimately recorded the fourth fastest time after “a few tumbles”, but ended the day with a 23 secs overall advantage over defending champion Matthias Walkner, followed by Argentinian star Kevin Benavides (+37) and Sunderland (+58).

Emirati rider Abdulaziz Ahli covered himself in glory by winning the quads crown at last year’s Abu Dhabi Desert Challenge. He was out on his own again today as he began the defence of his title by dominating the category, winning the stage by more than 53 mins from Slovakia’s Juraj Varga, on another Yamaha Raptor.

It was back in 1996 that Peterhansel scored his first win in the rally on a bike, and he recorded his most recent triumph with wife Andrea as co-driver in 2019.

Reaching the finish today he said: “It is great to be back in the Abu Dhabi Desert Challenge after so many times. I cannot remember the exact number. The rally is always challenging with the dunes, soft sand and the required navigation. This car is running well and no modifications were required following the Dakar Rally.”

Docherty commented: “It has been a good start, despite talking a few tumbles. This is my 2nd ADDC and my experience is increasing all the time. I practice a lot around Fossil Rock here in the UAE. I need to improve my navigation skills, so tomorrow and the rest of the rally will be interesting.”

Quads leader Ahli said: “I was going fast at the beginning because I started first. My strategy was to make as much a gap as I could from my rivals. Tomorrow will be the toughest stage because it is the longest”.

The Ruler’s Representative Court in Al Dhafra Region Stage marked the start of a new chapter for the Abu Dhabi Desert Challenge, as the second round of the inaugural World Rally-Raid Championship.

The new series has unified FIA and FIM cross country rallying, and there was some extra anticipation as the cars, trucks, bikes and quads left Yas Marina Circuit for the first of five competitive sections in the Al Dhafra region.

Each of the competitive sections are centred on the bivouac near Qasr Al Sarab, where technicians were soon at work, fixing and preparing rally machinery for the next day’s action in the Empty Quarter. 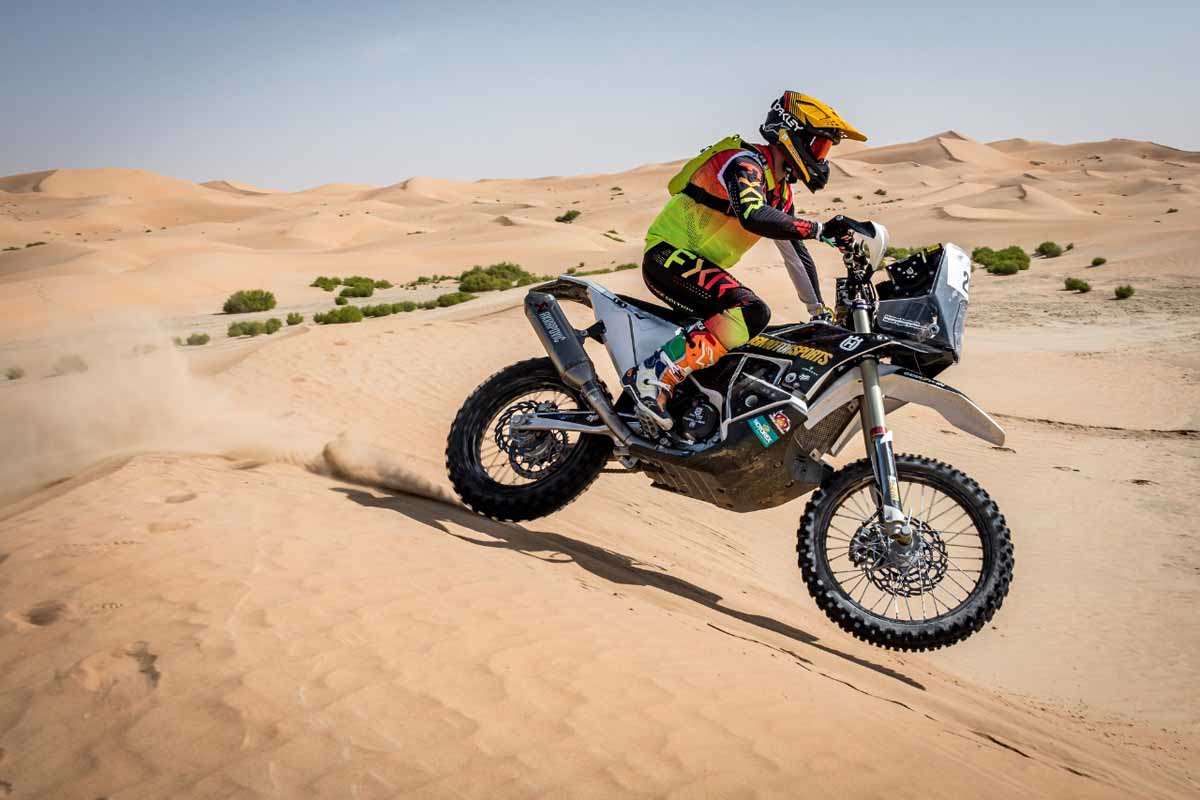 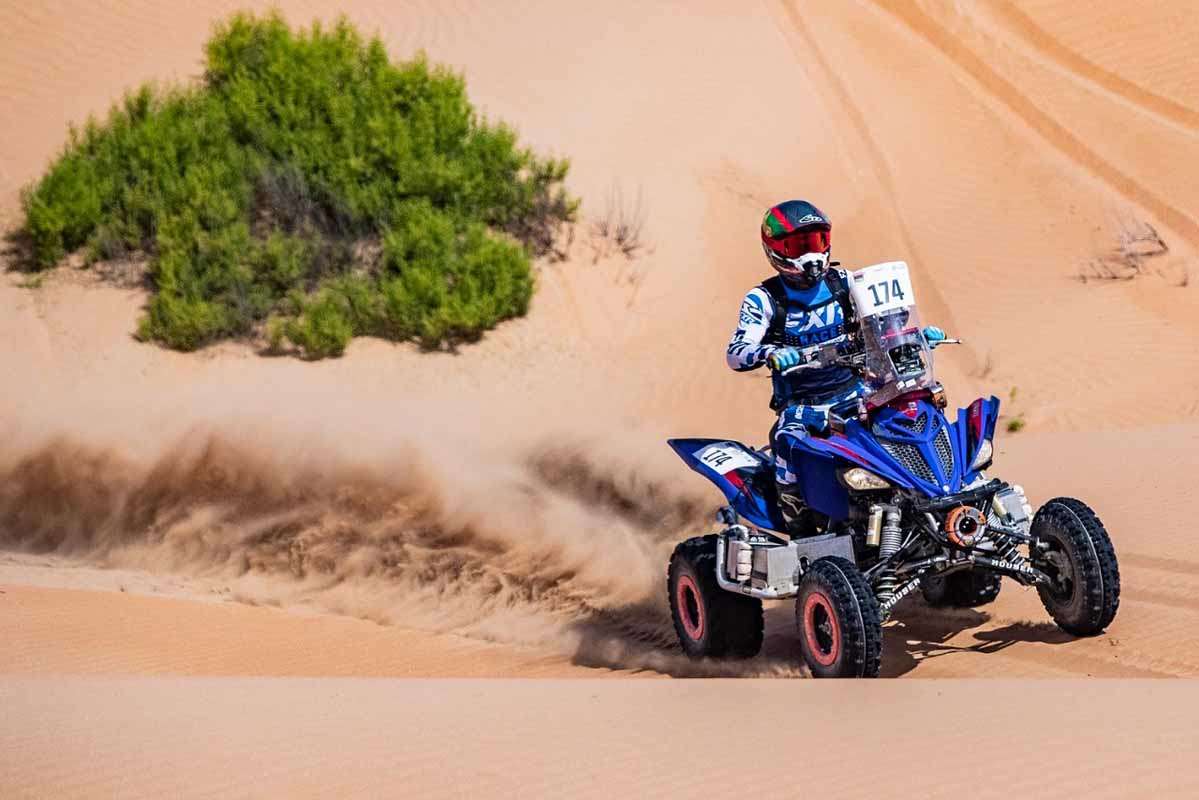 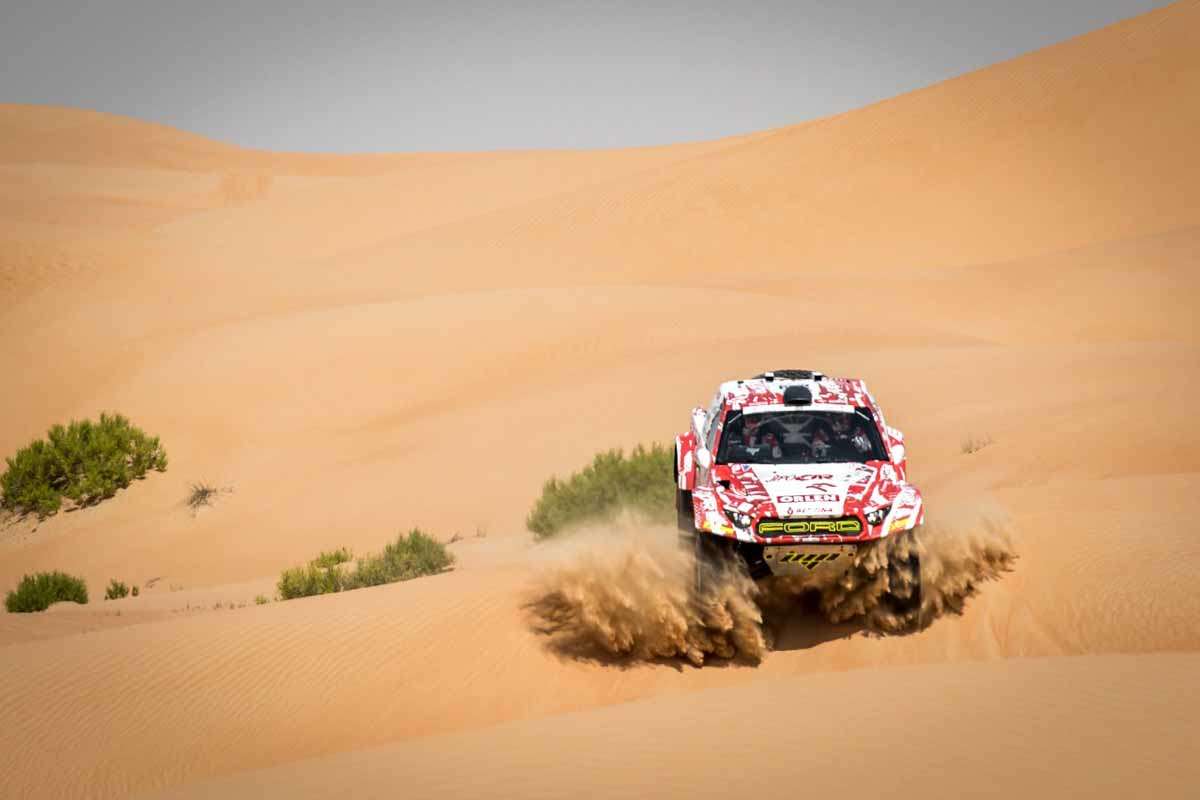 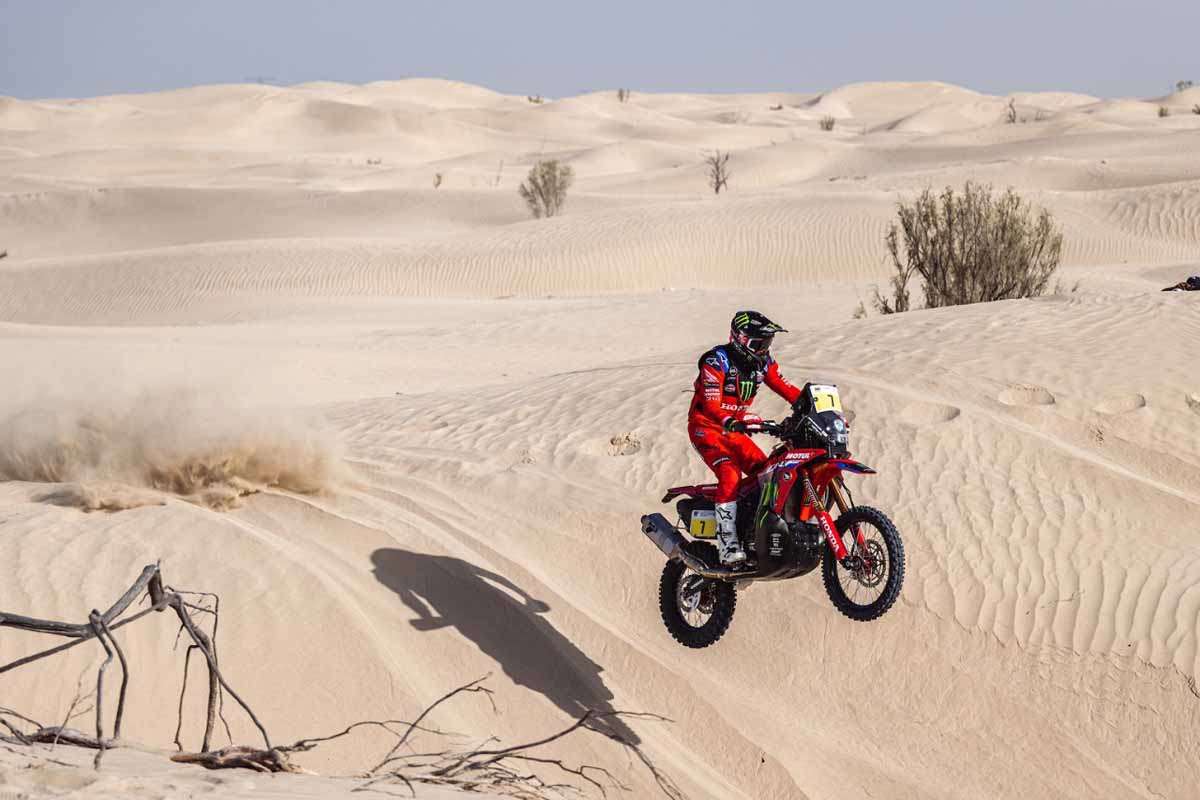 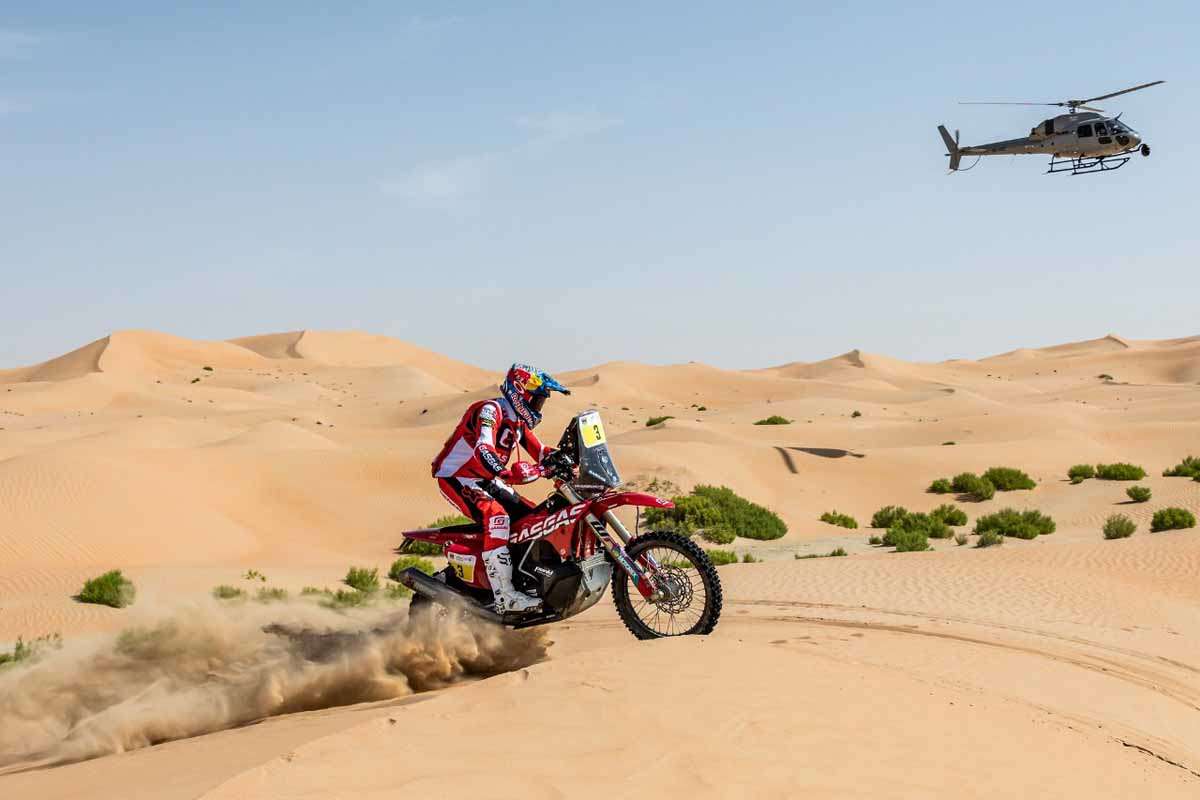