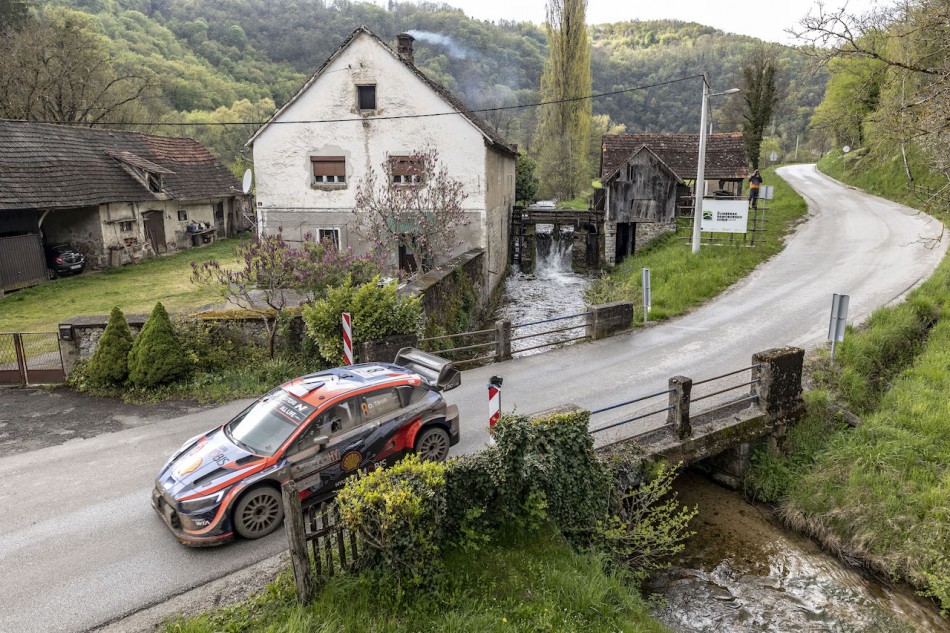 Ott Tänak is firmly back in contention to win the Croatia Rally after he slashed Kalle Rovanperä’s lead by more than a minute during Saturday morning’s loop of four stages.

Tänak, the 2019 FIA World Rally champion, trailed the dominant Rovanperä by 1m23.3s overnight. After the cancellation of the opening test this morning, he ate into the over-cautious Finn’s advantage by 10s in the next special stage.

But the big turnaround came during the morning’s Platak test, close to Rijeka on the Adriatic coast. In contrast to the dry start to the day, the more westerly location brought pouring rain and thick fog as the roads snaked up to a ski resort and a large fan zone.

Tänak and Rovanperä were the only two frontrunners with Pirelli’s wet weather rubber on all four corners. While Tänak claimed the fastest time in his Hyundai i20 N Rally1, a front-left puncture on his rival’s Toyota GR Yaris meant he conceded 54.5s.

Estonian Tänak nibbled back a further 1.4s in the morning’s closing test to leave him only 16.8s adrift as crews returned to Zagreb for the mid-leg service. He acknowledged the weather in Platak was a real eye-opener.

“I guess in these conditions you don’t care about the time, you’re just happy to make it through,” he admitted. “It was like a different place in the world. On the small road there was quite a lot of standing water so you have quite a bit of aquaplaning.

“On the big road with visibility where you can only see the bonnet it was fast. But in the fast if you don’t know where to go, driving blind was quite a challenge as well.”

FIA World Rally Championship leader Rovanperä has plenty of time at service to think about how hard he would fight to repel Tänak in the afternoon’s re-run of the stages.

“Ott has been really fast today so I think it will be a tricky afternoon. Let’s see how the feeling is and how fast is the pace. It’s going to be important for us to score some points so we have to be a bit clever,” said the 21-year-old.

Craig Breen is 41.0s behind in third, despite overshooting a hairpin in the final test in his M-Sport Ford Puma Rally1.

The Irishman has 26.2sin hand over Thierry Neuville, whose weekend took another twist when his i20 N was pushed into service early this morning. A 10s penalty for leaving a minute late while issues were fixed added to his one-minute penalty handed out overnight for a speeding offence.

Neuville was fastest in SS12 and was 37.2s clear of fifth-placed Elfyn Evans, who had set the fastest time in the opening run aboard his Toyota GR Yaris prior to the stage being cancelled. Takamoto Katsuta rounded off the top six, but the Japanese driver was more than two minutes adrift of the Welshman after an overshoot.

Oliver Solberg was a strong fourth after leg one on his Croatia Rally debut. But the young Swede crashed his i20 N in the opening stage, which was later cancelled as rescue vehicles attended a fire at the rear of the car.

The second Croatia Rally to count for the FIA World Rally Championship continues at 15h16 CET with the second running of the 23.76-kilometre Kostanjevac – Petruš Vrh stage.