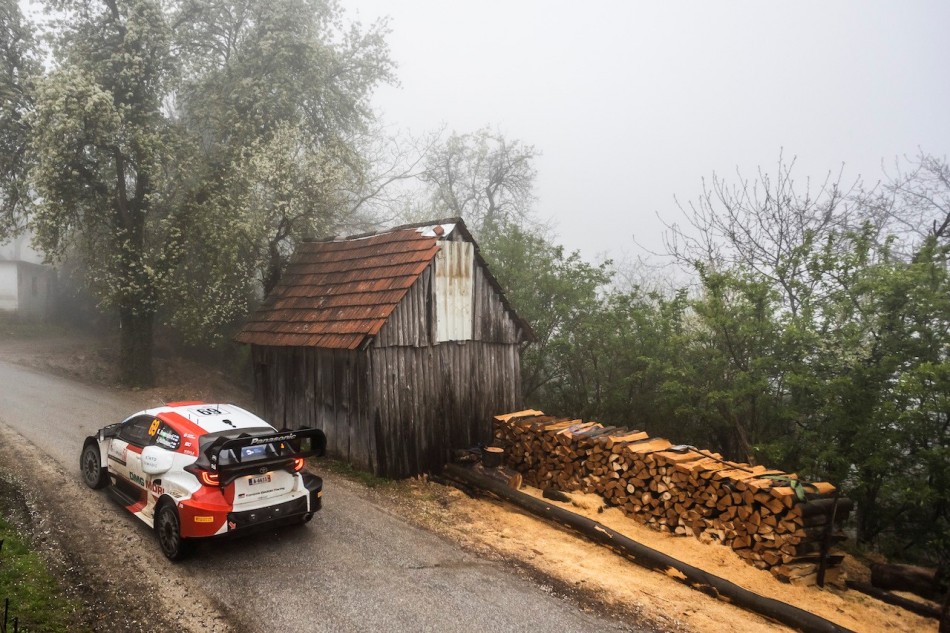 Kalle Rovanperä shrugged aside his lack of experience to lead an extremely difficult and dramatic Croatia Rally after Friday morning’s loop of four stages.

The 21-year-old missed his chance to learn the roads 12 months ago when he crashed out of the country’s FIA World Rally Championship debut after a handful of kilometres.

It didn’t hinder Rovanperä who won three of the opening four rain-soaked tests in a Toyota GR Yaris to lead Thierry Neuville by 12.5s at the midpoint of the opening day.

First in the start order benefited the championship leader as conditions worsened with each car due to mud dragged onto road from the verges, but the Finn was untroubled by the slippery special stages.

“I was quite comfortable in the car in these tricky conditions,” he said. “Our starting position has been good but we have been quite a bit faster than the guys behind us, so maybe it’s not just the starting position that is helping us.”

His Toyota Gazoo Racing WRT squad completed a clean sweep of stage wins. Team-mate Elfyn Evans’ only ray of light in a troubled morning was fastest time in the third test, where he defeated Rovanperä by 2.6s.

Neuville described the conditions as “horrible”, but the Hyundai i20 N driver was second fastest on three stages. “I immediately went into the ditch after three corners in the first stage because the grip was so low,” he lamented.

The leading duo distanced the rest. Ott Tänak was next up but the Estonian was already 47.3s off the lead and feeling the set-up of his i20 N was too stiff for the slippery roads.

Despite overshooting a corner in SS2 and narrowly missing a water hydrant , Craig Breen was only 1.9s adrift of Tänak on his first time aboard his Ford Puma Rally1 in the wet.

Team-mate Gus Greensmith survived an opening stage trip up a bank, which damaged his car’s front aero package to hold fifth, more than half a minute further back. Oliver Solberg was sixth in another i20 N despite spinning in the opening stage.

The GR Yaris cars of Takamoto Katsuta and Evans were seventh and eighth. Evans was already more than two minutes behind Rovanperä after puncturing his front left tyre in both the opening and closing stages of the loop.

In worse trouble was Esapekka Lappi who retired his GR Yaris in the first stage after clipping a boulder and wrecking the front right corner. Adrien Fourmaux was also out after sliding his Puma through a hedge into a roadside garden. The car was too damaged to continue.

German Armin Kremer tops the WRC2 Masters order in a Fabia Rally2 Evo, while Finn Sami Pajari has built up a comfortable margin in WRC3 at the wheel of a Ford Fiesta Rally3.

Following a service stop at the Zagreb Fair, Croatia Rally 2022 resumes with the second run through the 19.20-kilometre Mali Lipovec – Grdanjci stage from 15h05 CET.