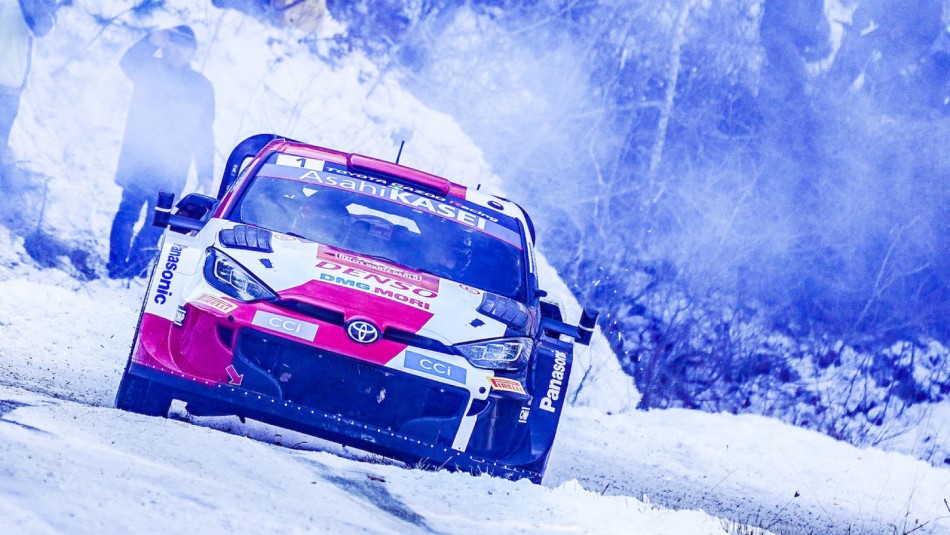 Sébastien Ogier sits on the cusp of a record-breaking ninth Rallye Monte-Carlo victory after outwitting arch-adversary Sébastien Loeb in the snow and ice of the French Alps on Saturday.

Ogier headed to the closing speed test over the Col de Fontbelle with 5.0sec in hand over his fellow Frenchman after reclaiming the lead earlier in the penultimate leg.

With 5km of wintry roads at the top of the pass, Loeb laid out his cards by bravely fitting his Ford Puma with Pirelli’s soft compound asphalt rubber. He hoped to benefit on the dry sections before minimising the time loss on the ice.

Ogier had already decided to mix two soft tyres and two snow tyres on his Toyota GR Yaris, but on seeing Loeb’s selection, he made a last-gasp switch to the same combination. He then outpaced Loeb by 16.1sec to reach the final overnight halt with a 21.1sec lead.

“I was planning to go with the snow tyres because that was the safest option but I saw that Séb was going for slicks so I swapped at the last minute before the start,” Ogier explained. “It was tricky to drive in places….”

Loeb could not reproduce the pace that carried him to four fastest times yesterday.

“Now the gap is a bit far,” he admitted. “We tried but Ogier saw it and changed at the last minute. It was really tricky with the slicks and very easy to make a mistake but we’re here.”

After a day of breathless drama, Craig Breen was third in another Puma. The Irishman was 64.9sec adrift of Loeb but a clean run enabled him to climb from sixth.

After a dismal opening two days, Kalle Rovanperä found a more balanced set-up for his GR Yaris and soared from ninth to fourth. He ended 37.8sec behind Breen after winning the final two stages.

Gus Greensmith was fifth despite a puncture and an engine problem which cost time in the stages as well as a three-minute penalty as he replaced his Puma’s spark plugs. Having slipped to ninth, he recovered well as his rivals fell by the wayside.

Thierry Neuville fought against a broken front damper in his Hyundai i20 N, which punched through the bonnet at one point. He dropped several minutes and ended almost eight minutes off the lead in sixth.

Elfyn Evans was third until he slid off the road, leaving his GR Yaris perched on the edge of a steep drop. He conceded 20 minutes.

Ott Tänak retired his i20 N in the first climb up the Col de Fontbelle after nosing into a bank and damaging his car’s radiator, while team-mate Oliver Solberg dropped 35 minutes after locking his brakes and sliding down a bank.

Takamoto Katsuta’s fifth place disappeared when he found a ditch on the col and dropped off the leaderboard.

WRC2 cars filled the rest of the top 10 places. Andreas Mikkelsen was seventh in his Toksport-entered Škoda Fabia Evo, despite stopping to change a puncture in the final test. Yacco ACCR Team driver Erik Cais and Grégoire Munster were next up in a Ford Fiesta MkII and Hyundai i20 N respectively, with PH Sport’s Yohan Rossel slipping to tenth after losing 90sec with his Citroën C3 stuck in a final stage ditch.

Sunday’s finale comprises two tests in the Alpes-Maritimes region driven twice without service before the finish in Monaco’s Casino Square. The last stage forms the Wolf Power Stage with bonus points available for the fastest drivers. The four tests add up to 67.26km.

The full provisional results can be consulted here.