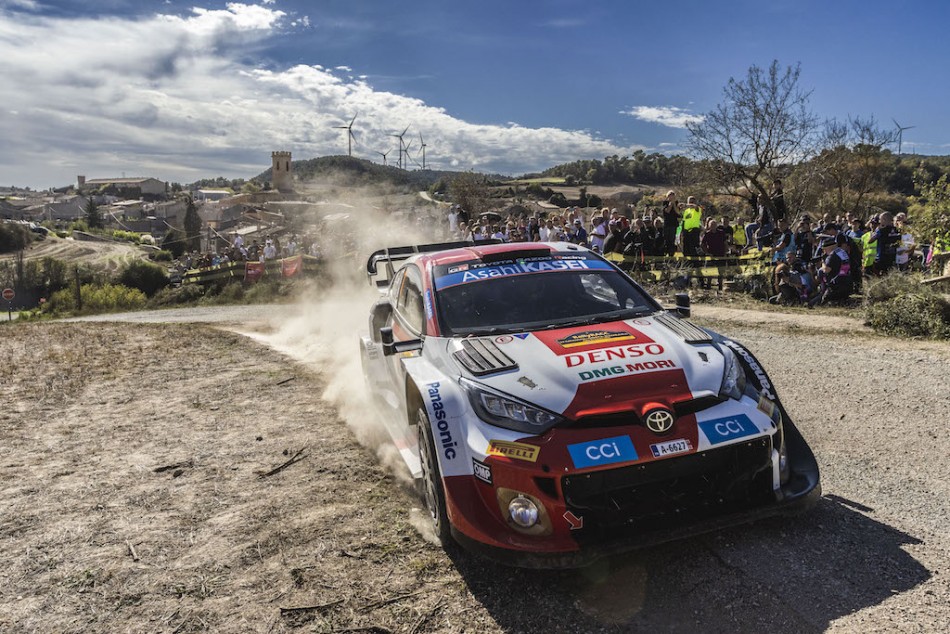 Sébastien Ogier is on course to win round 12 of the 2022 FIA World Rally Championship following a morning of drama on RallyRACC Catalunya-Costa Daurada Rally de España.

Driving a Toyota GR Yaris Rally1 for Toyota Gazoo Racing WRT, the Frenchman, who has eight WRC titles and 54 event victories to his name, is 14.1s ahead of second-placed Thierry Neuville with two stages of the all-Tarmac event remaining.

Belgian Neuville, meanwhile, started Sunday’s deciding leg 1.4s ahead of world champion Kalle Rovanperä in the battle for the runner-up spot. But with the Toyota driver suffering a damaged front-left tyre on SS17, Hyundai Shell Mobis World Rally Team’s Neuville is seemingly in the clear with a 14.7s margin over his Finnish rival.

But there were no such problems for Ogier, who remains in control despite Neuville’s advances. “I heard before the start that Elfyn and Craig had issues,” said the 38-year-old. “I think there was a tricky place near the end [of the stage] and I was planning to avoid anyway because I am not taking any risks. There is like a small hole and if you go in it the impact is too hard for the tyres.”

Neuville, who followed up team-mate Sordo’s fastest time on SS16 – held in the early morning dark – by going quickest on SS17, said: “It was okay but I was still struggling with the understeer. Other than that I had a clean stage. We know this one very well so it’s tough to make a big difference in these stages.”

Behind Breen, Takamoto Katsuta is eighth, Adrien Fourmaux is ninth despite swiping a roadside barrier on SS17, with Pierre-Louis Loubet in P10.

A 10s penalty for Jan Černý has handed his fellow Ford Fiesta Rally3 driver Lauri Joona a 12.1s advantage in FIA WRC3. Emmanuel Guigou (Alpine A110) is almost five minutes in the clear in FIA RGT.

With a 30-minute service in Salou complete, the rally is set to reusme with the repeat of the 12.15-kilometre Pratip test from 10h29 CET. Riudecanyes, which is best known for its roundabout at Coll de la Teixeta, counts as the Power Stage when it runs for a second time from 12h18 CET.