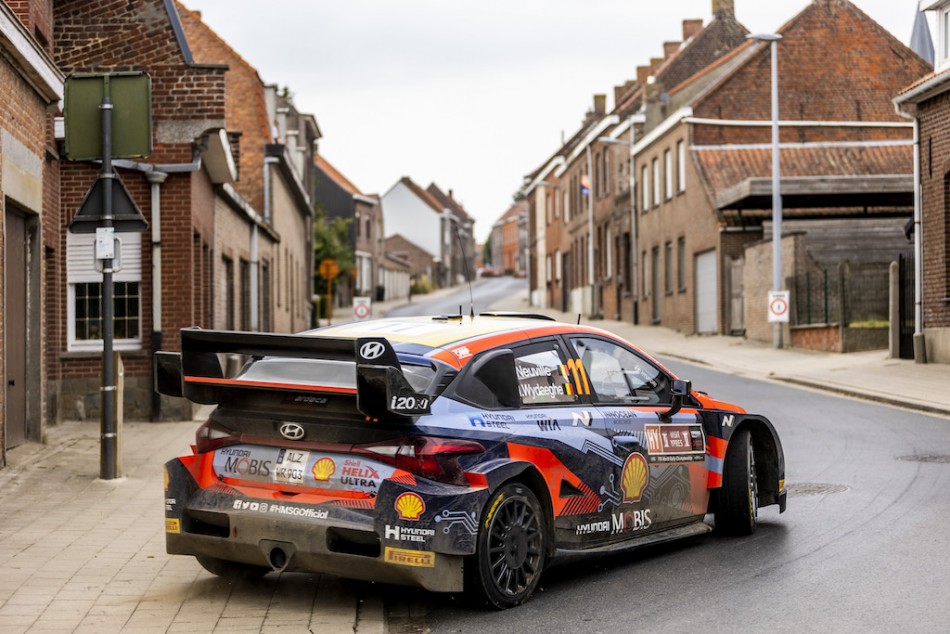 Just 2.5s split the South Korean manufacturer pairing after Friday’s opening leg and Tänak – fresh from victory in Finland last time out – wasted no time in pressuring the overnight leader on round nine of the FIA World Rally Championship.

He was fastest out of the blocks and outpaced a sleepy Neuville by 2.6c on the opening Reninge run to move ahead by just one-tenth of a second.

The next stage at Dikkebus had to be halted when Craig Breen, driving an M-Sport Ford Puma Rally1, ran wide into a ditch on the outside of a left-hand corner and rolled into retirement while running fifth overall.

By the time action resumed on SS11, Neuville was back into his groove. Unfazed by some nervous handling from his i20 N Rally1, the Belgian outpaced his team-mate by 6.2s to snatch back the top spot before adding another huge 9.9s to his margin in the final test as Tänak complained of transmission issues.

With four stages remaining today, Neuville’s advantage is up to 16.2s.

“Of course, we want to fight for the victory and I had to give it a go. We are getting a bit better with the car, but I feel like there is some more [speed] to come – we just need to find it.”

Tänak was unable to elaborate too much on his issue, but he did explain it was something related to the car’s four-wheel drive system.

“It’s affecting us a lot,” he said. “I came through as smooth as I could but we have very inconsistent four-wheel drive at the moment and it’s so disappointing. You can drive it, but not like a rally car.”

Elfyn Evans has closed in on Tänak and completed SS12 just 5.3s behind to round out the top three. He has a hefty 37.2s in hand over Toyota GR Yaris Rally1 team-mate Esapekka Lappi, who was all smiles after a neat and tidy loop.

Adrien Fourmaux was more than two minutes back from the leaders but gained a position when M-Sport colleague Breen rolled out of contention. The Frenchman also leapfrogged Oliver Solberg and held fifth overall, just 4.5s in front of his Hyundai-driving rival.

Gus Greensmith slid wide into a ditch on Dikkebus and, although the M-Sport driver was able to continue, he dropped over 10 minutes during the loop while nursing damaged rear suspension.

The repeat of the 15.00-kilometre Reninge test launched the afternoon action at 15h13 CET.