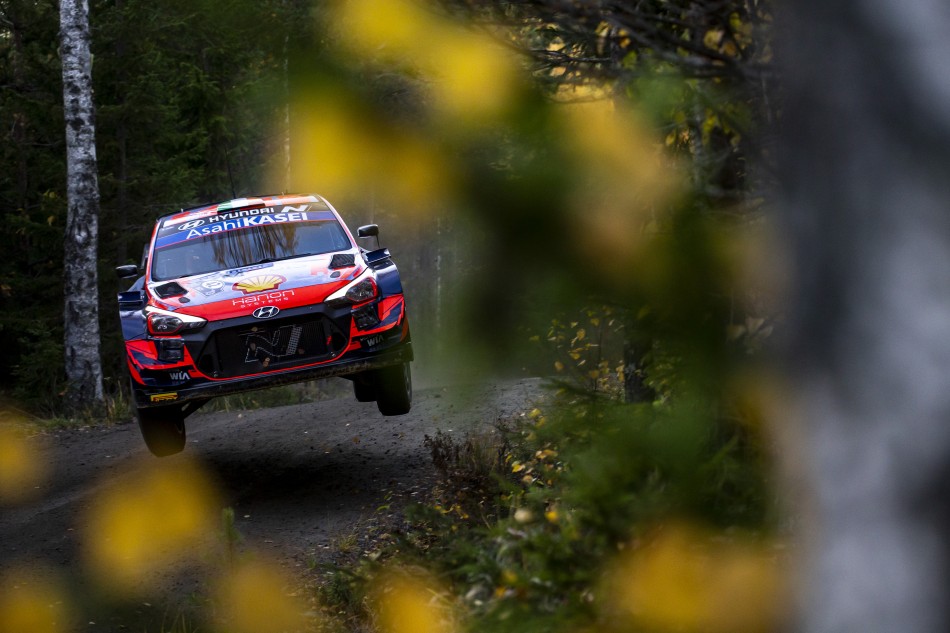 Breen unseated the Estonian, who had led for all but one of the opening five speed tests, with a charging flat-out drive through the closing Oittila special stage – the rally’s first test in darkness since 1994.

With his Hyundai i20’s auxiliary lights blazing on the tree-lined roads, the Irishman overturned a 1.5sec deficit to lead Tänak by 2.8sec. Just 7.9sec blanketed the top five after a frantic Friday with Elfyn Evans, Esapekka Lappi and Kalle Rovanperä hot on their heels.

Breen and Tänak shared two stage wins each and the pair were never separated by more than four seconds as the FIA World Rally Championship’s fastest round lit up the gravel tracks near Jyväskylä.

Tänak, who is bidding for his third straight Rally Finland victory, was surprised to be in the fight for victory against a Toyota Gazoo Racing squad, which is based near Jyväskylä and is unbeaten on the rally since 2017.

Evans even outpaced the duelling Hyundai pair through Oittila to claim fastest time and leap from fifth to third in a Toyota Yaris. The Welshman kept clear of trouble to end 3.3sec behind Tänak and six-tenths ahead of Lappi.

Lappi, the winner in 2017, was returning to the top tier for the first time since December last year but quickly shook off the rust in a privately-entered Yaris. He ended 1.2sec clear of fellow Finn Rovanperä, whose pace significantly improved on the second pass of the stages.

Thierry Neuville was more than half a minute off the lead in sixth in another i20. The Belgian was cautious throughout but ended with a 2.3sec advantage over championship leader Sébastien Ogier, who was frustrated by his pace.

Takamoto Katsuta led after the opening Harju stage through Jyväskylä’s streets, but the Japanese driver was fortunate to survive a huge high-speed spin after hitting a bump in the next stage. He was eighth, ahead of Ford Fiesta pair Gus Greensmith and Adrien Fourmaux.

In FIA WRC2, Teemu Suninen delivered a night driving masterclass in his Movisport-entered Polo GTI to move into the class lead on Friday.

The Finn spent most of the opening day swapping seconds with series regulars TRT’s Mads Østberg in his Citroën C3 and team-mate Nikolay Gryazin and just 2.2sec separated the trio as they donned the light pods before the final stage.

Suninen mounted an attack under the darkness of Oittila to go fastest by a whopping 10.4sec. The time moved him into the lead and helped him build an 8.2sec advantage at close of play.

Behind Suninen, Flying Finn Emil Lindholm won four out of six stages to forge a healthy lead in FIA WRC3.

The newly-crowned Finnish champion looked comfortable on his home roads and set the pace on the opening pair of stages.

Fellow Škoda Fabia Rally2 driver Mikko Heikkilä pulled back a handful of seconds at Sahloinen-Moksi, but Lindholm kept his cool and extended his advantage on each of the final three tests.

A close call with a rock in the final Oittila blast was the only drama to report and Lindholm arrived back to Jyväskylä 17.1sec ahead of Heikkilä.

With 151.95km of relentless action around Jämsä, Saturday’s action comprises more than half the rally’s competitive distance. Four morning stages, including roads from the iconic Ouninpohja test, are repeated in the afternoon after service. A re-run of today’s Harju stage, in darkness, completes a gruelling leg.