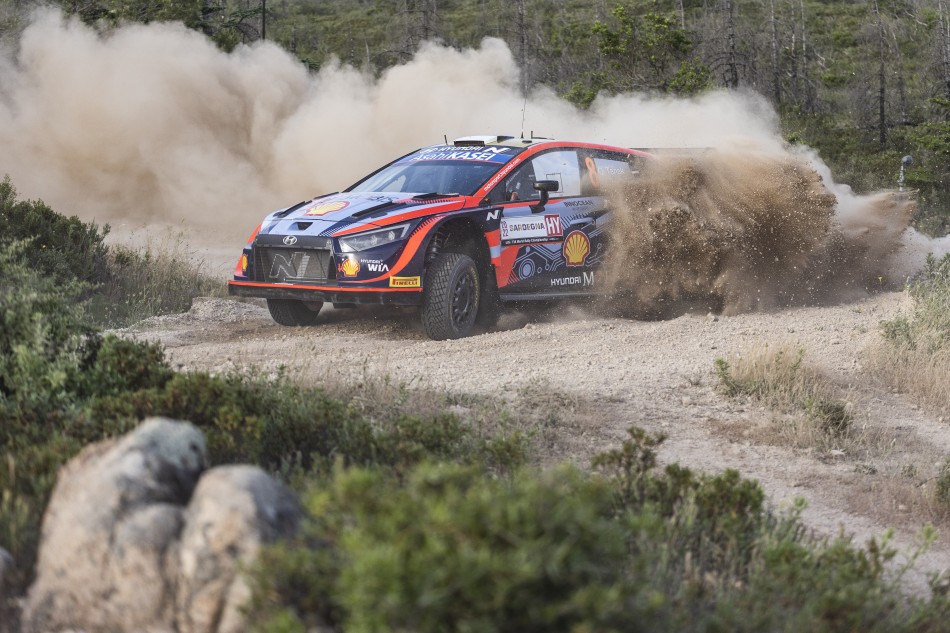 However, the Finn’s Yaris got out of line following a heavy compression 10.4km into the first stage of the day and struck a rock to the right of the road.

The car then bounced into a rock on the other side, ripping off the rear left wheel and suspension components, before coming to rest in the undergrowth.

It’s the second successive rally from which Lappi has retired – he also clipped a rock on his last outing at the Croatia Rally.

“It’s really hard to take this one,” said Lappi. “I really felt that we were not taking any risks on the stage. I should have braked probably less in this corner because there was a stone on the ground which we caught on the [sump] guard and it threw us off the line.

“I believe if I had braked less, then the front of the car would have been higher and we probably would have survived this.”

Lappi’s demise left Tänak comfortably in front, although there were no signs of easing from the Hyundai i20 N driver. He went on to win three out of four stages to end the loop with a 30.9sec lead.
Craig Breen was Tänak’s nearest challenger. The Irishman moved into the runners-up spot after M-Sport Ford colleague Pierre-Louis Loubet punctured a front right tyre on SS10, but faced constant pressure from third-placed Dani Sordo.

Sordo reduced the deficit to 1.5sec by the end of Tempio Pausania 1, but Breen responded with a convincing stage win at Erula – Tula and stretched his advantage to 10.3sec. Loubet was another 14.0sec down and took a cautious approach following his puncture.

Adrien Fourmaux was sixth in a third Puma, followed by Kalle Rovanperä, who overtook his Yaris team-mate Takamoto Katsuta when the Japanese hotshot stalled on SS11. Gus Greensmith and FIA WRC2 runners Nikolay Gryazin, in a Toksport WRT2 entered Škoda Fabia Evo, and Jan Solans, in a Citroën C3, completed the leaderboard.

Hyundai’s Thierry Neuville had been targeting a climb up the leaderboard after ending Friday ninth following transmission woes. However, the Belgian’s luck ran out on the third stage when a rollover put him out for the day.