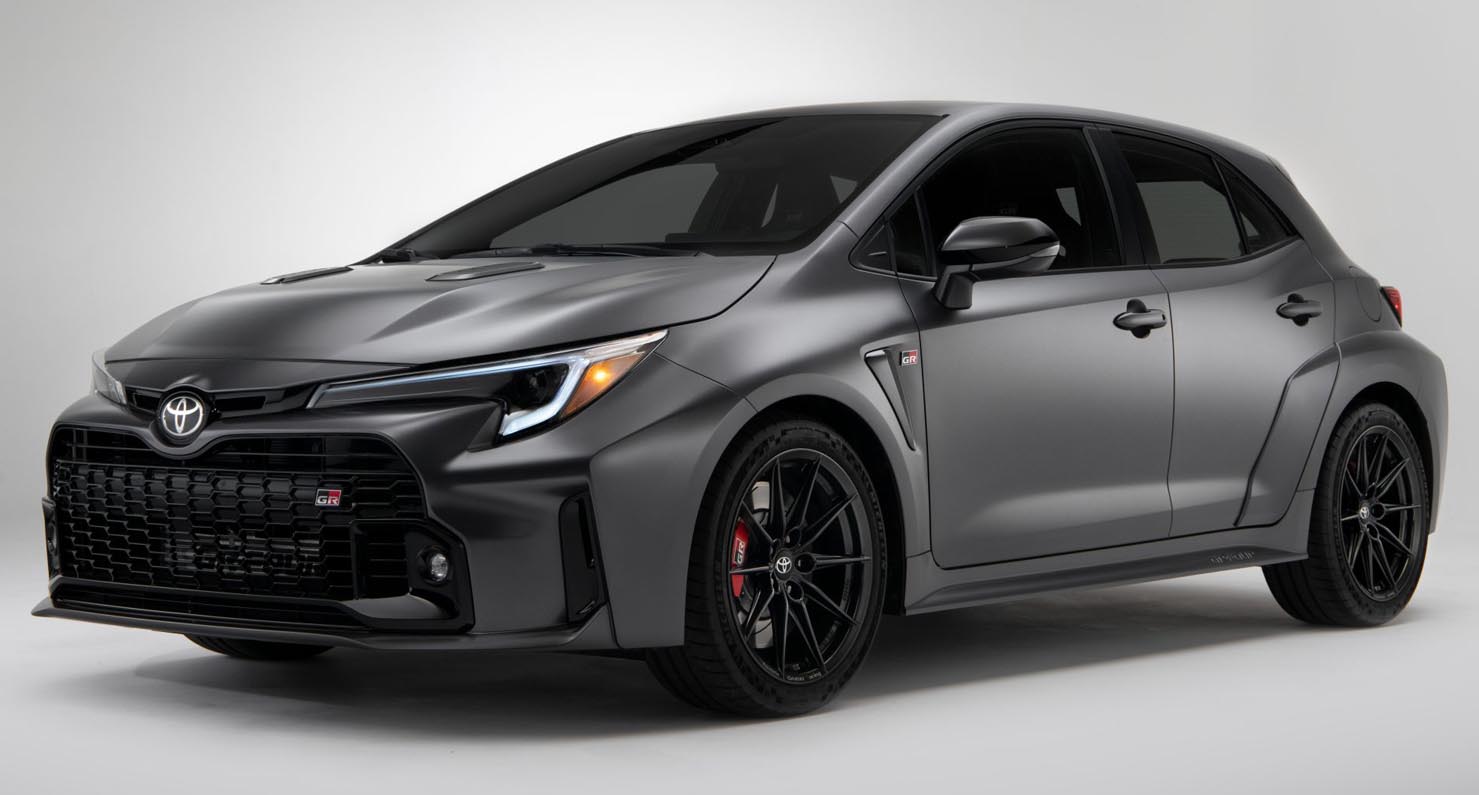 How does TOYOTA GAZOO Racing squeeze even more excitement into the ultra-hot GR Corolla? Like any enthusiasts, they take it to the garage and figure out how to add power, reduce weight and enhance handling – all while keeping an eye on building a car that’s ready to jump from the street to the track. Then, after tweaking, testing and re-testing, they come away with a GR Corolla that can carry only one name: GR Corolla MORIZO Edition.

The purpose-built MORIZO Edition adds even more heat to Toyota’s GR lineup, which includes the performance ready GR Corolla Core Grade, launch-year-only Circuit Edition, as well as GR Supra and GR86. The MORIZO Edition was named for GR Master Driver and Toyota president Akio Toyoda. This track-oriented version of GR Corolla was designed to meet specifications desired by Toyoda himself, with tight handling, a high power-to-weight ratio and a highly rigid body. Only 200 numbered-units will be produced for model year 2023.

Like the Core and Circuit Edition, the MORIZO Edition comes in at 300 horsepower, with torque bumped up to 295 lb.-ft. versus the 273 lb.-ft. available in its siblings. TOYOTA GAZOO Racing engineers retuned GR Corolla’s engine for additional power, with peak torque coming in at 3250-4600RPM. The MORIZO edition has an exclusive close ratio intelligent Manual Transmission (iMT) and shorter differential gears for satisfying acceleration across the power band.

For tight handling, the MORIZO edition has extra-wide grip, Michelin Pilot Sport Cup 2 tires mounted on 18-inch forged alloy wheels with an exclusive matte black finish and TOYOTA GAZOO Racing logo on the rim. It will be equipped with red-painted monotube shock absorbers and have unique suspension tuning for a precision driving feel fit for racing.

On the inside of the MORIZO Edition, drivers will find exclusive red and black Ultrasuede and leather sport seating with high bolsters and harness holes, and an Ultrasuede wrapped steering wheel with red sightline, shift knob and boot and parking brake lever.

On the outside it features functional venting, with MORIZO exclusive front brake ducts, and the same forged carbon fiber roof, vented bulge hood and GR-Four stamped side rockers on the Circuit Edition, and aerodynamic features like a flat underfloor and rear lip spoiler. It will be available in Windchill Pearl and a MORIZO Edition exclusive NEW matte finished Gray and be built at the GR Factory at Toyota’s Motomachi Plant. MSRP for will be announced later this year with availability at Toyota dealerships in 2023.

For GR Corolla MORIZO grade, we took the same turbocharged G16E-GTS powerplant used in the GR Corolla and bumped the torque. Displacing 1,618 cubic centimeters, it produces a maximum power of 300 hp and 295 pound-feet of torque.

The G16E also benefits from motorsport technologies that maximize performance, including multi-oil jet piston cooling, large-diameter exhaust valves and a part-machined intake port. Combustion is fed by Toyota’s D-4S direct and port fuel injection system, which operates at high pressure for maximum fuel dispersion and efficiency. This compact-yet-powerful three-cylinder engine has increased power for GR Corolla thanks to improved engine exhaust efficiency and a 3-piece muffler with valve capped off with brushed stainless steel tips. This design reduces exhaust pressure and outside noise, which are essential to backpressure performance. 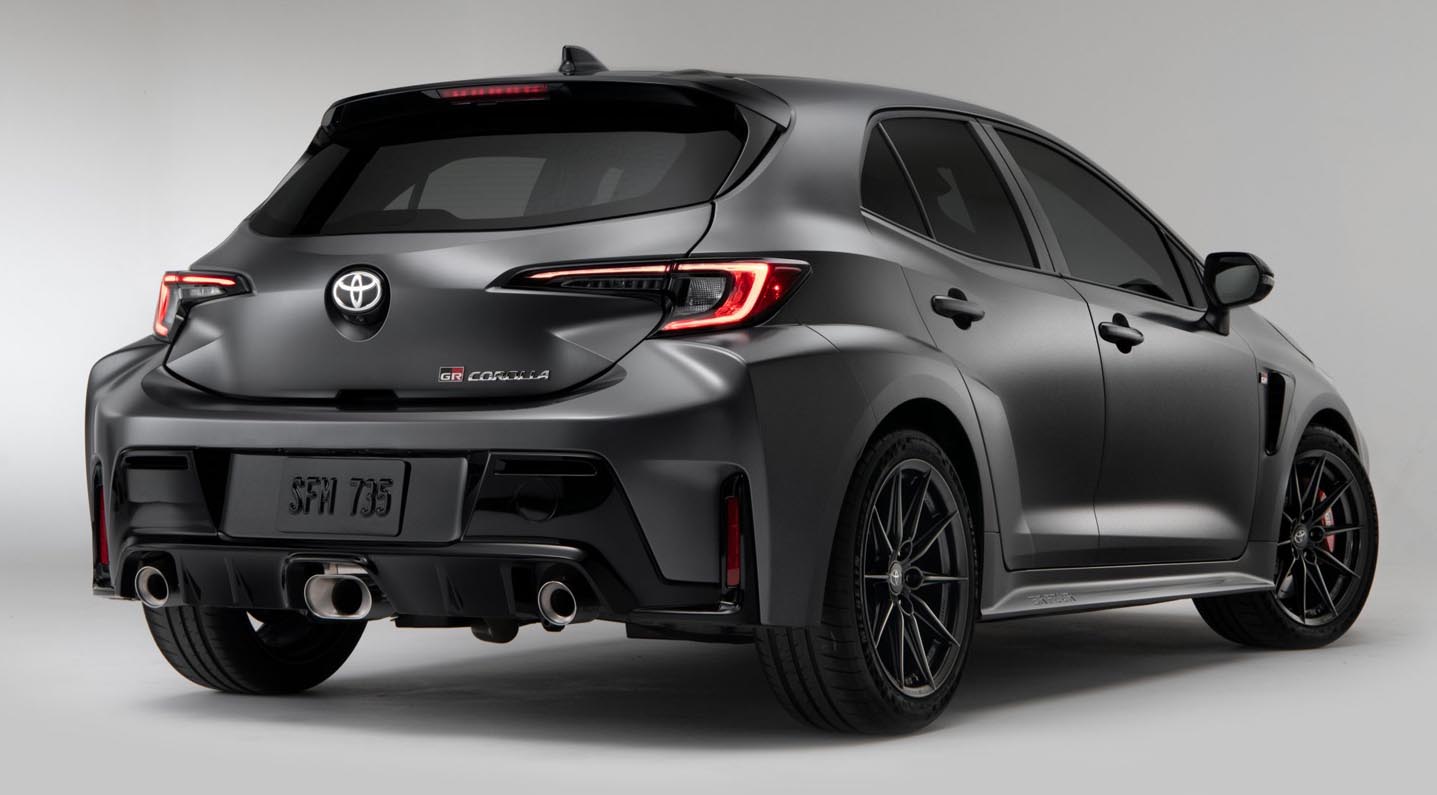 Wide, Rigid and Designed to Handle

To achieve control worthy of the GR badge, a highly rigid body was specially constructed for GR Corolla. Based off the GA-C platform, it produced handling performance that rewards the driver. Enhanced rigidity comes from significantly more weld points in the frame, particularly to strengthen joints. Further gains are made through extensive use of structural adhesive, increasing the joint rigidity between component parts.

The front suspension is a MacPherson-type strut design that offers both light weight and firm handling, maximizing the tires’ grip potential. Made up of circuit-tuned coil springs, monotube shock absorbers and stabilizer bars, the front suspension is designed to deliver all the engine’s power to the road and provide optimum cornering capability on all surfaces. The rear suspension uses a double-wishbone type multilink system that accommodates the AWD system’s goal of maximum agility and stability.

With all TOYOTA GAZOO Racing sports cars firmly rooted in motorsports, it only makes sense that the GR Corolla’s drivetrain was born from the rigors of rally racing.

At the heart of the new GR Corolla is the GR-FOUR All-Wheel-Drive system, Toyota’s first sports all-wheel-drive system in over 20 years. Developed in collaboration with the TOYOTA GAZOO Racing World Rally Team and honed by WRC drivers, it delivers exceptional levels of traction and control with engineering designed to optimize drive power to each wheel, while also being simple and lightweight.

With the twist of a dial, GR Corolla can adjust four-wheel drive performance to fit the driver’s needs. For every-day situations, drivers can set a front/rear torque distribution of 60:40; for a more sport setting, balance can shift to the rear, with 30:70 distribution for a fun-to-drive quality on winding roads and circuits; and for maximum stability, a 50:50 setting can be used for fast, competitive track driving on circuits or special stages. In each mode, the torque balance will automatically adjust in response to the driver’s inputs, vehicle behavior and road or track conditions.

The GR Corolla MORIZO Edition is also equipped with front and rear Torsen Limited-Slip Differentials (LSD) which offer enhanced cornering performance and grip with control of left and right-hand drive torque distribution on the front and rear axles.

Throughout the GR Corolla MORIZO grade, there has been a focus on saving weight to maximize the performance potential. This rigorous approach is particularly evident in the car’s construction, with extensive use of lightweight metals and materials used in key areas.

On the MORIZO Edition, the roof is made of a forged (rather than woven) carbon sheet molding compound. This lightweight, highly rigid material keeps off the ounces that steel roof would bring and helps lower the car’s center of gravity.

Aluminum is used for the hood and front door panels, with light and strong high-tensile steel in critical areas to help ensure the car’s structure can still safely absorb and dissipate impact forces.

For the best possible aerodynamic performance, GR Corolla’s nose ascends to a tapering roof line. Wind flow is directed onto the rear lip spoiler to generate extra downforce. As with rally cars, the shaping of the front and rear canards and GR-Four stamped lower rockers efficiently channel airflow down the sides of the vehicle. Hood, fender and rear bumper ducts, and a flat underfloor reduce drag, add downforce and improve stability.

At the rear, it features a rear lower bumper cover with functional air vents finished in gloss black. The tapering of the roof and rear pillars are complimented by a high mounted matte-black rear spoiler. The wide track and flaring of the rear fenders emphasize the car’s wide and low silhouette. 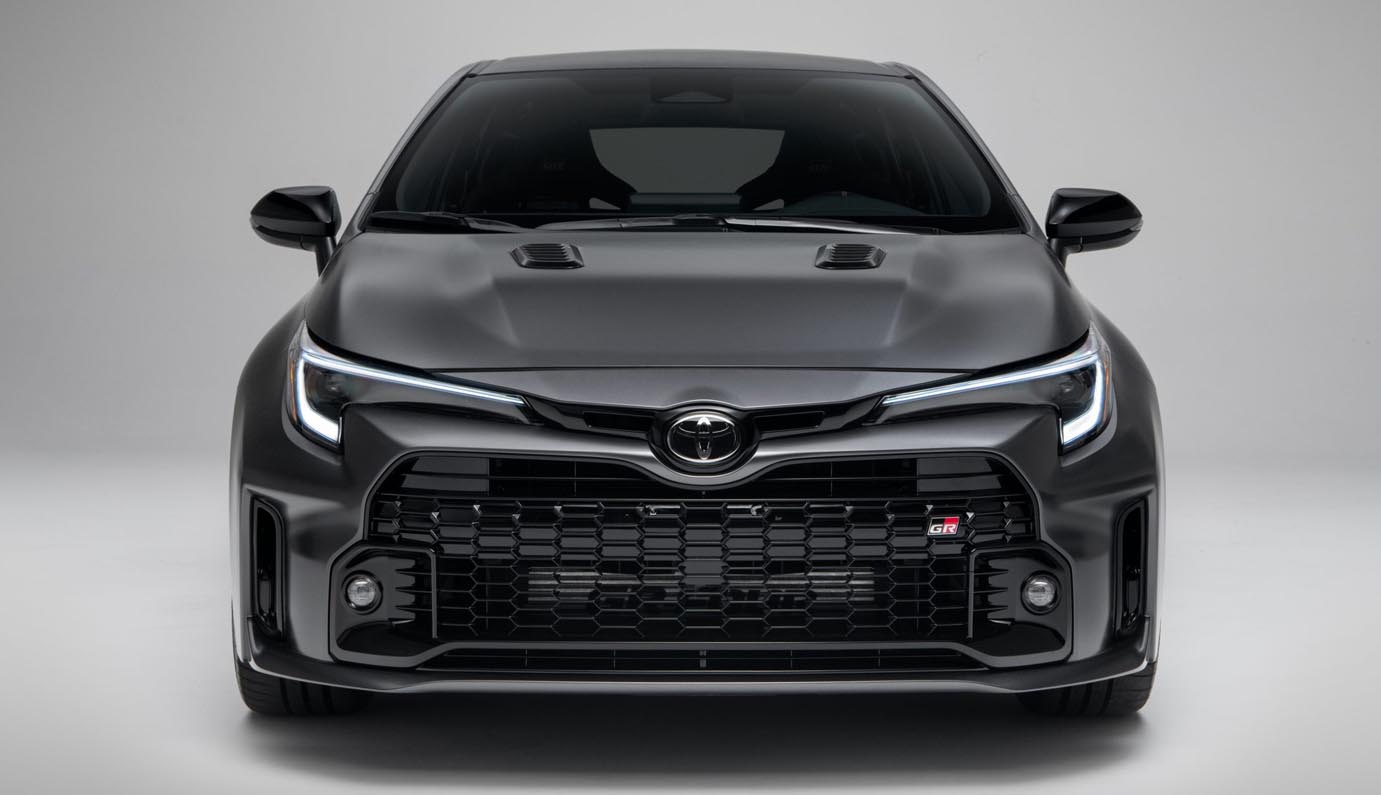 The design of the GR Corolla’s interior reflects the car’s performance, particularly around the driver’s cockpit.

Incorporating the feedback of professional drivers, a GR Full TFT meter was newly developed with a 12.3-inch color Multi-Information Display (MID) that has a GR meter with 4WD mode, turbo pressure, gear position indicator and tachometer. The brightly lit display is designed for easy-viewing in any condition and even features a start-up GR animation.

The shift lever has a shortened stroke for a quick throw between gears. Positioned where the driver’s arm is naturally lowered from steering, the action is light with short shift strokes, adding to the performance quality. GR Corolla MORIZO Edition uses a pull type mechanical parking brake.

All GR Corolla grades come standard with Toyota Safety Sense 3.0 (TSS 3.0), which includes enhancements made possible by system sensors with improved detection capability. The Pre-Collision System with Pedestrian Detection is capable of detecting motorcyclists and guardrails in certain conditions. When making a turn or approaching an intersection, the system is designed to detect certain forward or laterally approaching vehicles and provides audio/visual alerts and automatic braking in certain conditions.

Improved lane recognition delivers refined performance of Lane Departure Alert with Steering Assist and Lane Tracing Assist. GR Corolla will be equipped with Dynamic Radar Cruise Control (DRCC). Lane Departure Alert with Steering Assist is designed to notify the driver via audible and visual alerts and slight steering force if it senses the vehicle is leaving the lane without engaging a turn signal. When DRCC is set and engaged, Lane Tracing Assist uses visible lane markers or a preceding vehicle to help keep the vehicle centered in its lane.

Toyota’s Rear Seat Reminder comes standard on all GR Corolla grades. The feature can note whether a rear door was opened after the vehicle has been turned on, with a reminder message in the instrument cluster after the engine is turned off, accompanied by multitone chimes.

In addition to the TSS 3.0 system, other standard safety features on the GR Corolla include Blind Spot Monitor (BSM), which is designed to help detect and warn you of vehicles approaching or positioned in the adjacent lanes, and Rear Cross Traffic Alert (RCTA) for added peace of mind by helping to detect vehicles approaching from either side while backing out and alerting you with a visual and audible warning. Hill Start Assist Control (HAC) also comes standard.

In 2007, Akio Toyoda wanted to expand the company’s use of racing in its car development activities. As a starting point, he chose to compete in the 24 Hours of Nürburgring, the grueling endurance race held on the famous track winding through the German forest. It was an unofficial Toyota activity at the time, so the team was called GAZOO Racing and was made up of employees, including Akio Toyoda driving under the alias of MORIZO.

With a limited budget, the newly named team entered the race with two second-hand Altezzas. Despite adversity, both cars finished the challenging race, and a new era of Toyota motorsports and product development, one founded on a spirit of challenge aimed at instigating change, began.

With professional drivers, experts and MORIZO at the wheel, GR Corolla was tested repeatedly at some of Japan’s leading circuits, including Fuji Speedway, Suzuka and Tsukuba Circuit. In addition, the GR team carried out heavy duty dirt and snow driving with a Japanese Rally Championship driver. No road was left unturned in the process, so engineers and technicians could sharpen acceleration and control worthy of the GR name.

To help meet the performance goals for the GR Corolla, Toyota has established a dedicated GR Factory at its production facility in Motomachi, Japan. It’s the birthplace of legends such as the Lexus LFA and Supra A80 and is now home to the first GR production line, where GR Corolla and GR Yaris are precision built.

Instead of the traditional conveyor system, the body and assembly lines comprise several different cells connected by automatic guided vehicles (AGVs) rather than the conveyors featured in conventional car plants. This fully flexible method of working, with many manual assembly techniques, enables precise body and suspension alignment, with variations in vehicle dimensions and weight kept to a minimum.

Using manual expertise means that the assembly of each GR Corolla takes longer than a conventional mass-produced car. The production line has been streamlined for performance, with elements such as body alignment and weld checks to ensure that each GR Corolla is built with meticulous care and attention.

TOYOTA GAZOO Racing has brought together highly skilled technicians from throughout the company to work on the GR Corolla. This team not only assembles every GR Corolla but also contributes to the technical skills of workers at other Toyota facilities. It’s a team structure that’s part of the overall GR mission at Toyota, developing people, driving fans, and making ever better cars.

*Certain features include a trial period at no extra cost upon original date of new vehicle purchase or lease. After the trial period ends, a paid subscription is required. 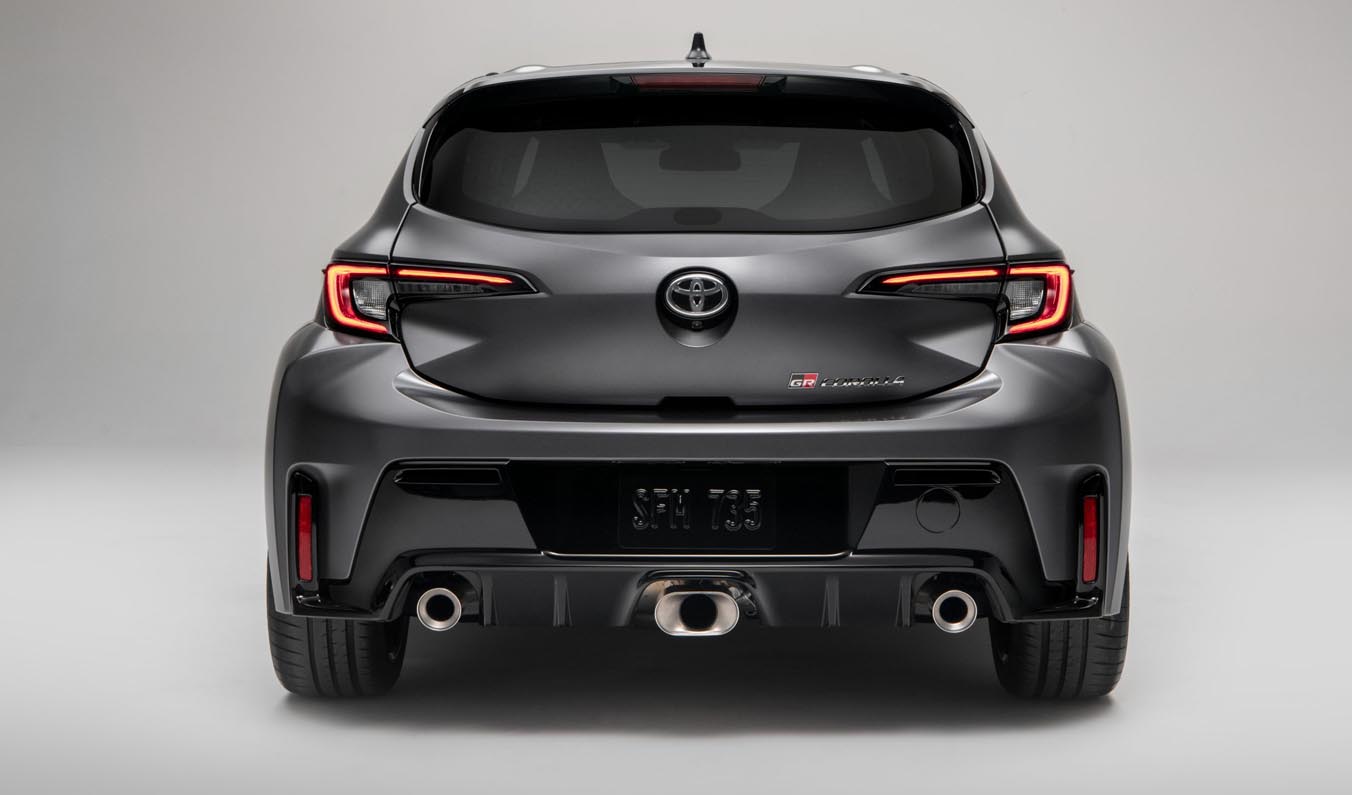 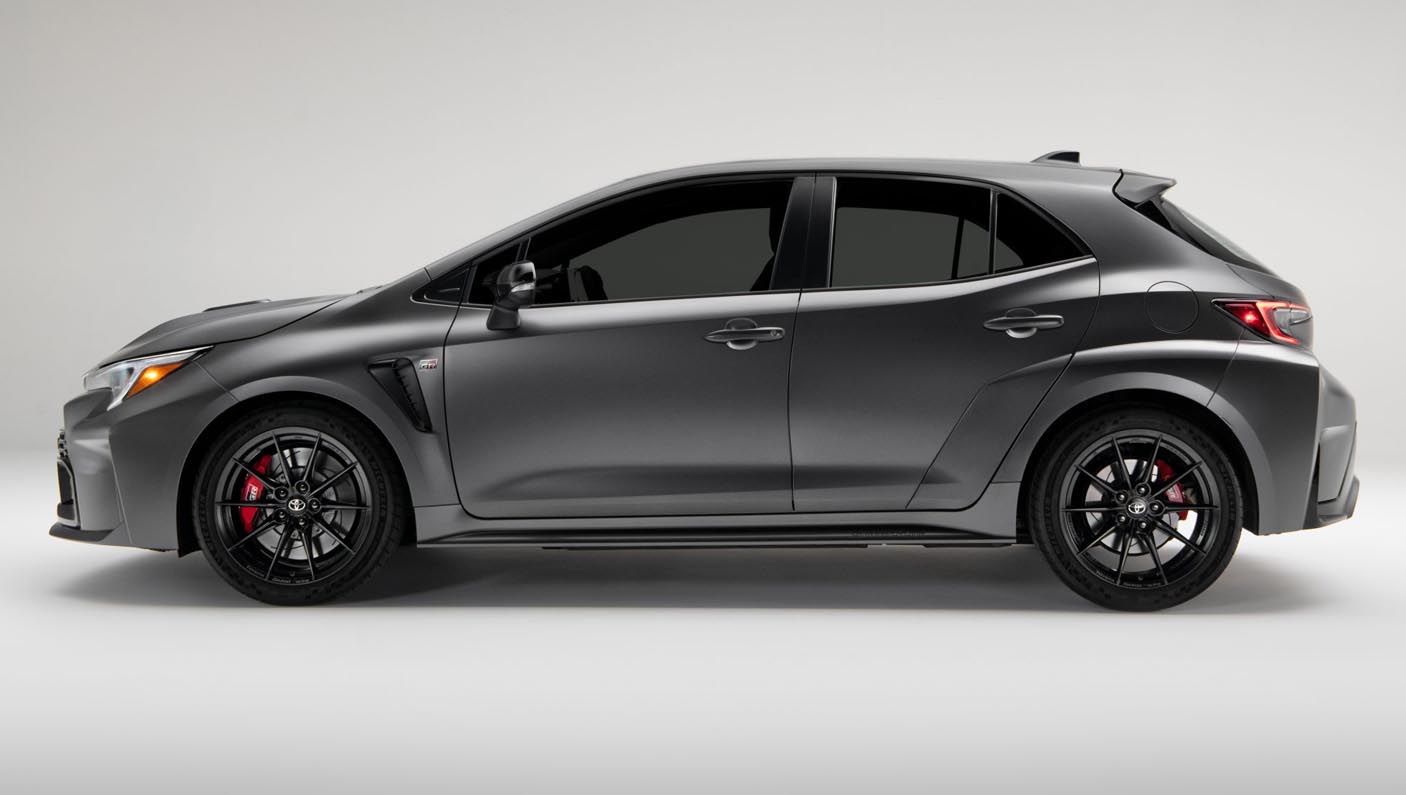 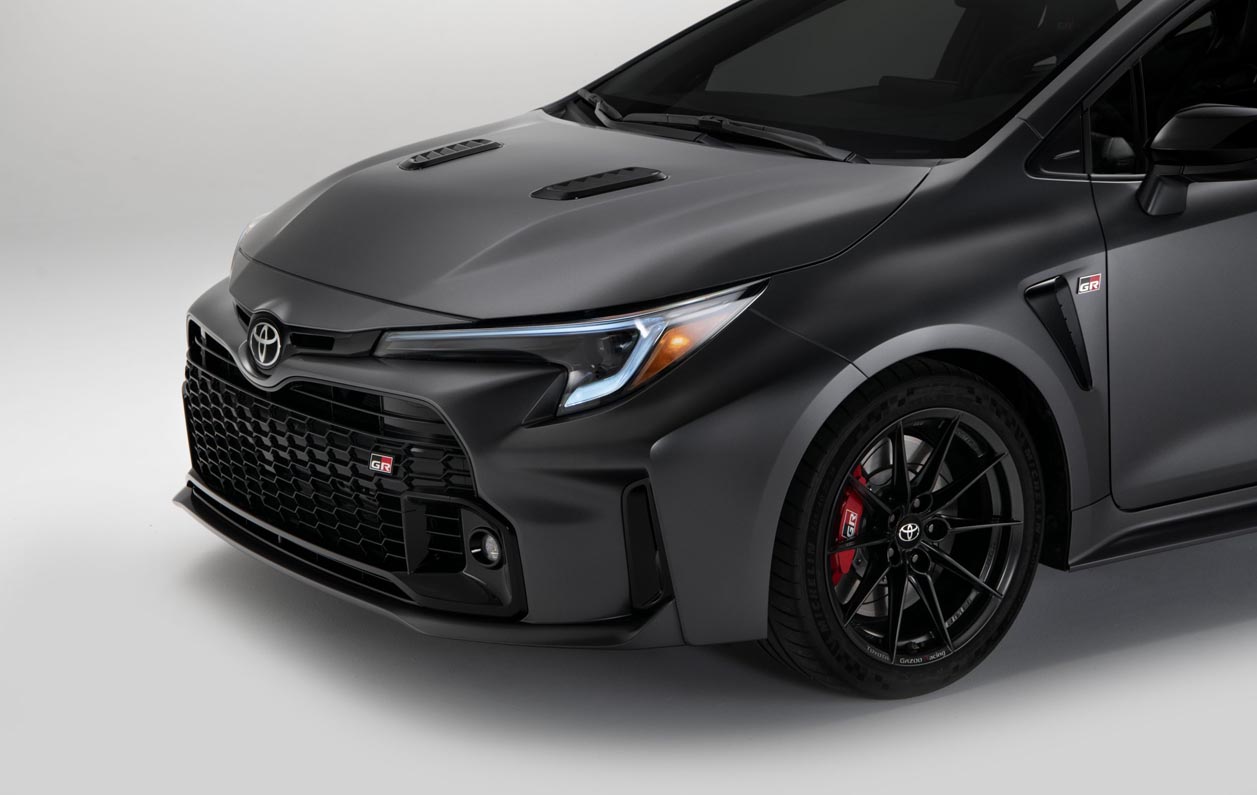 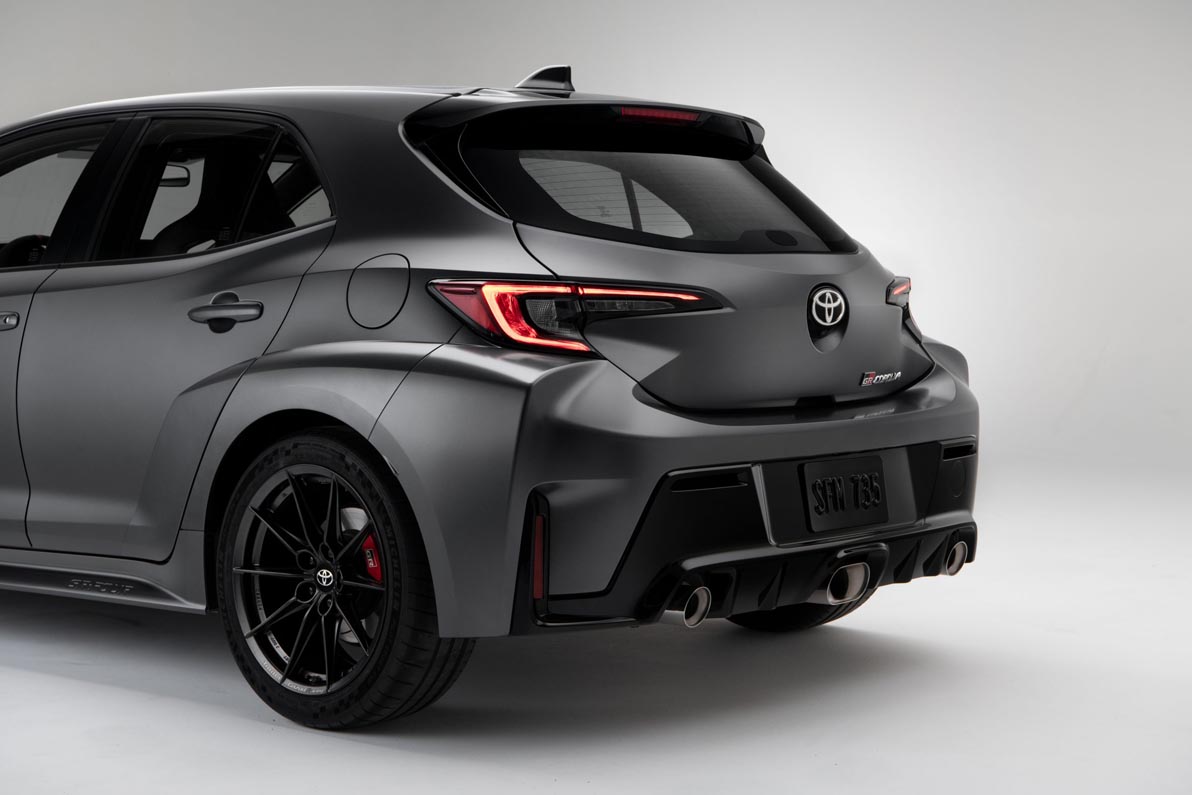 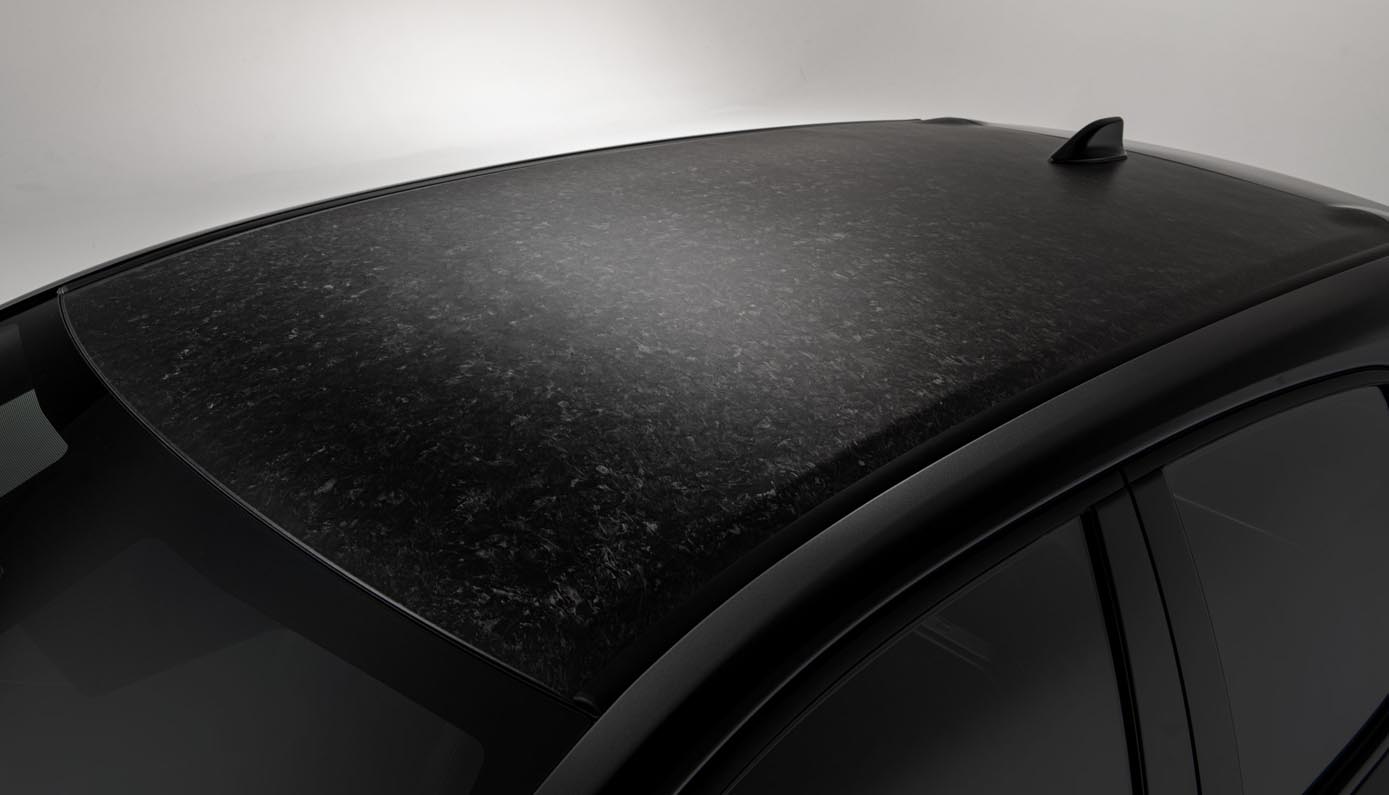 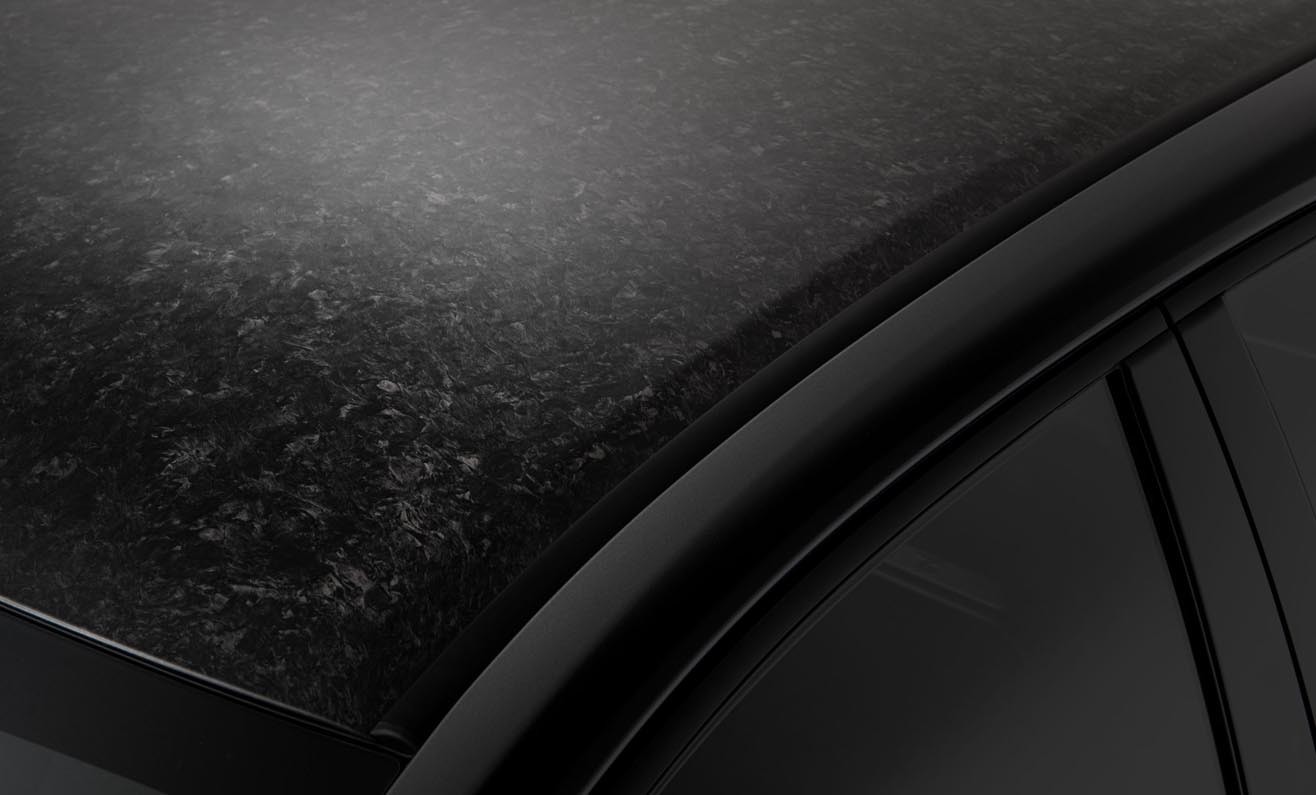 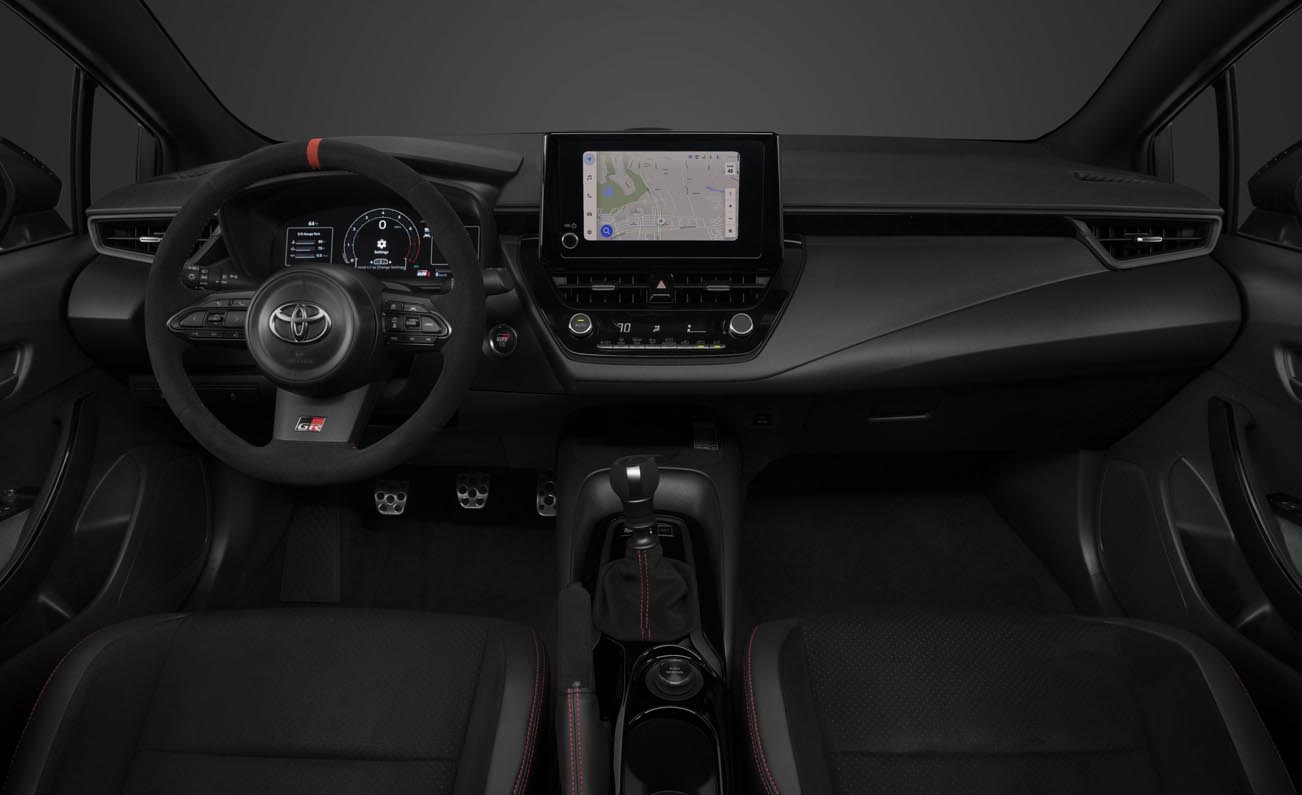 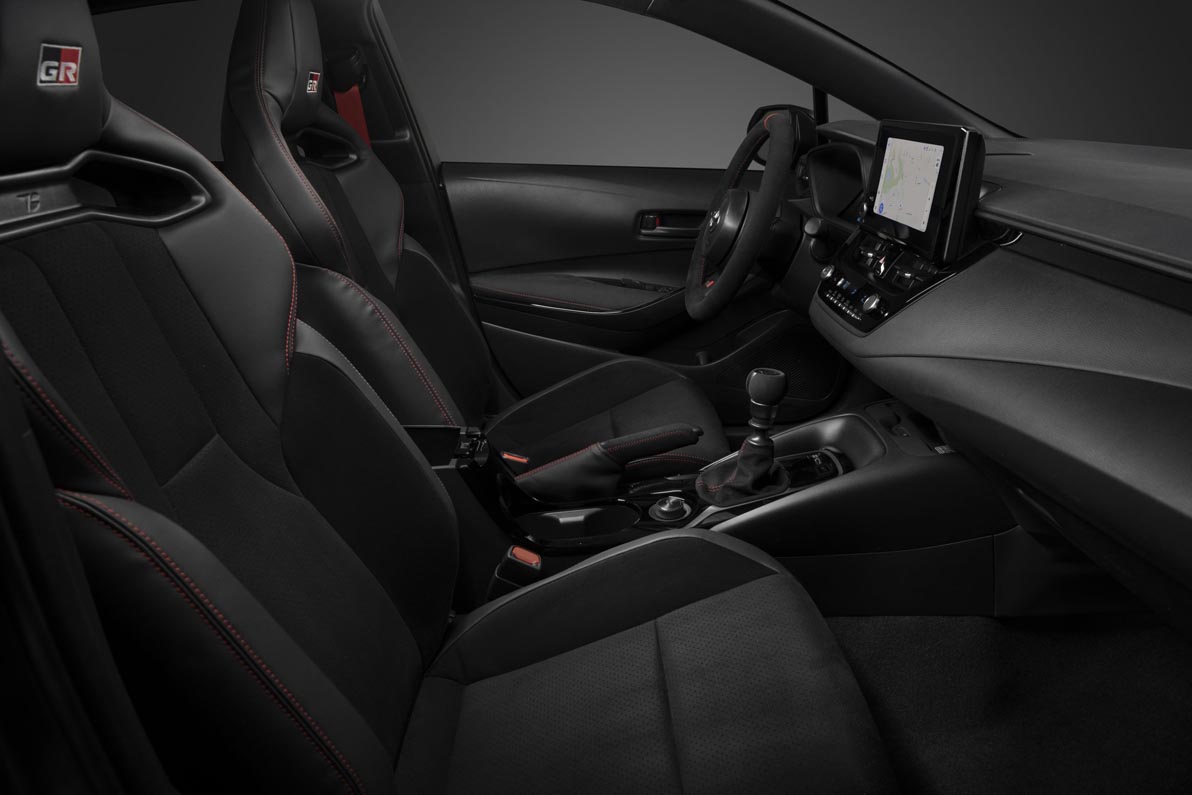 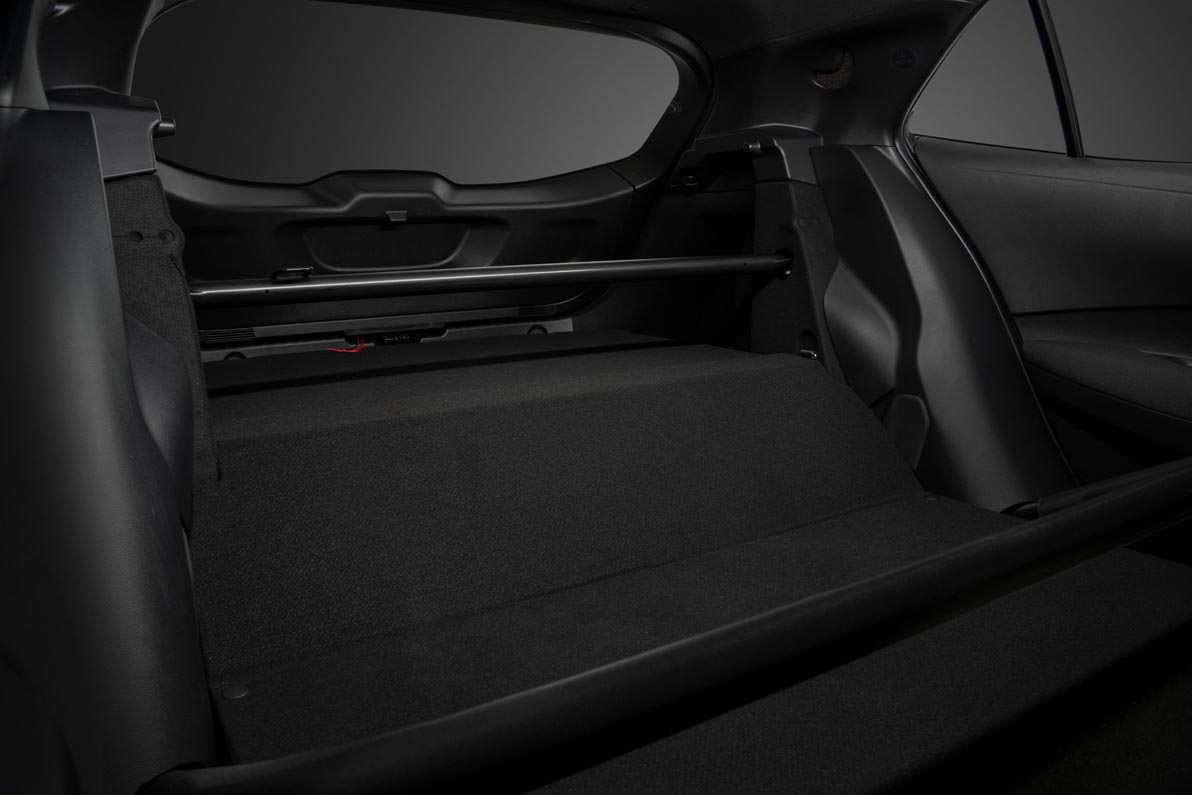 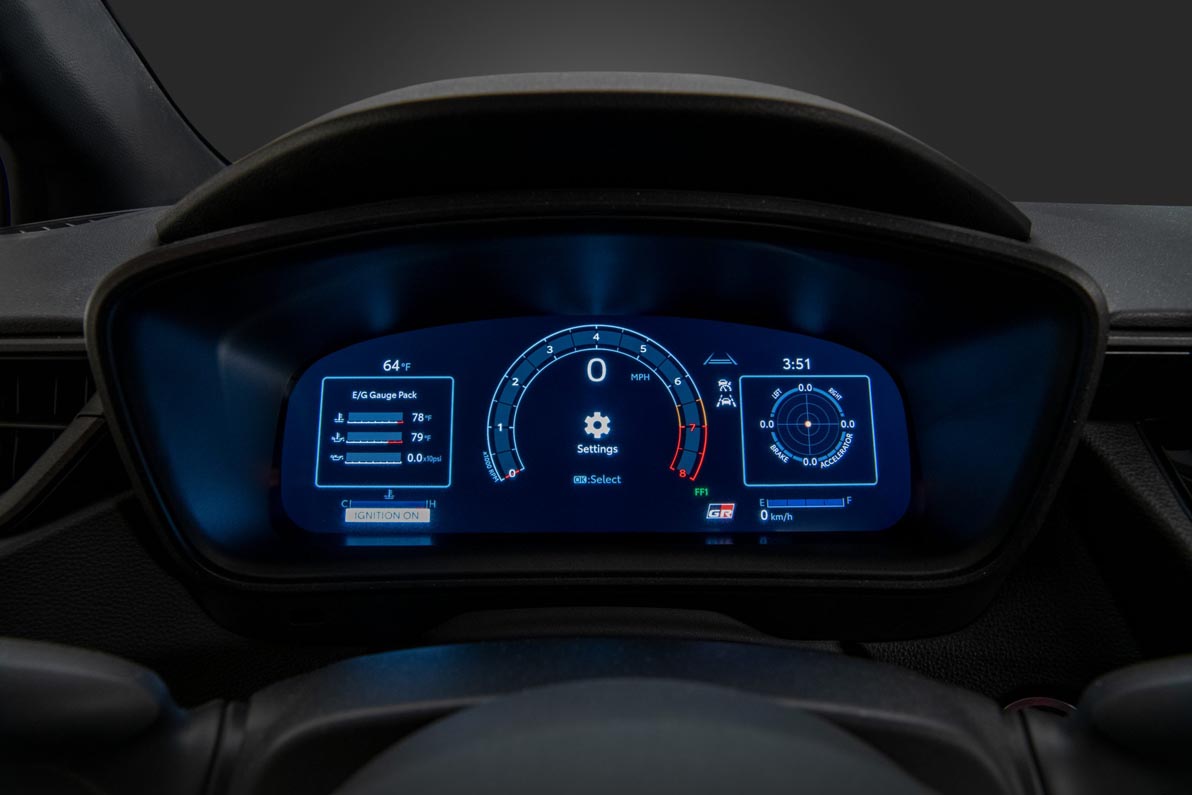 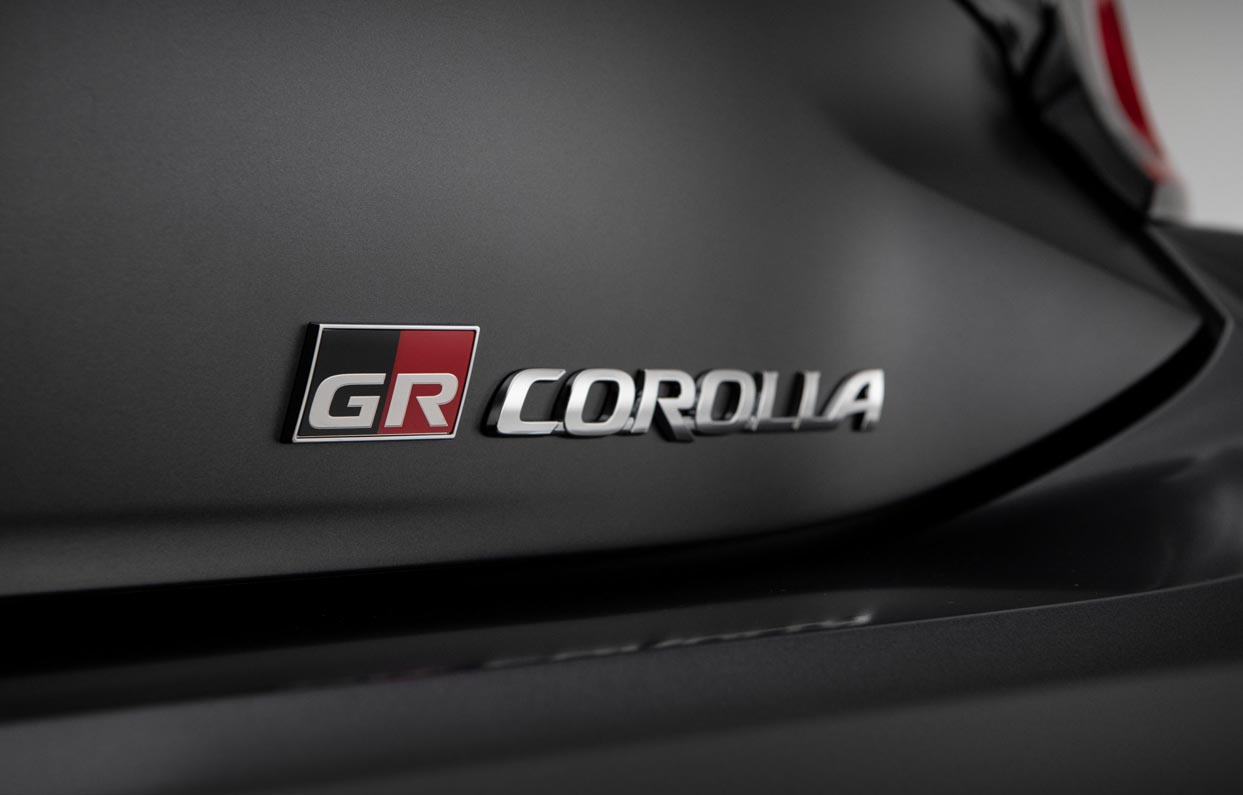 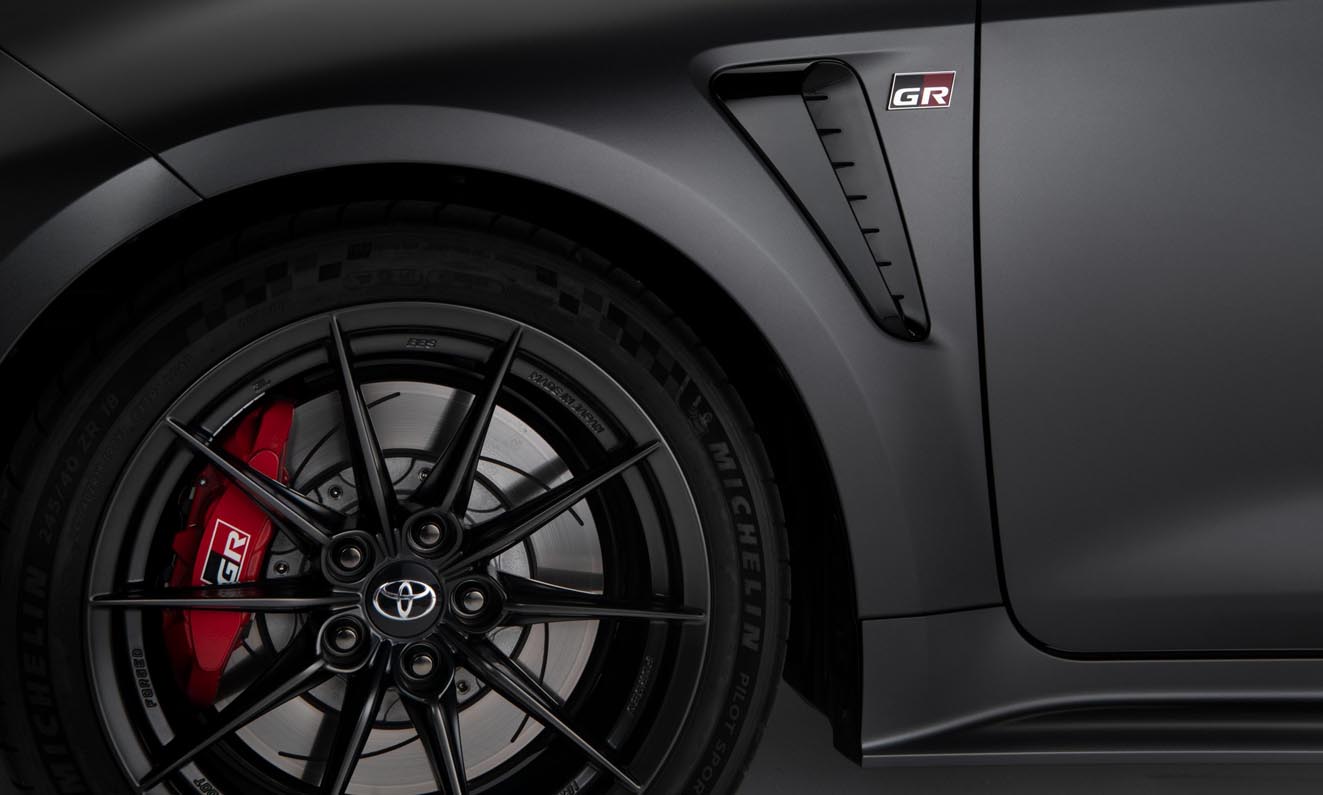 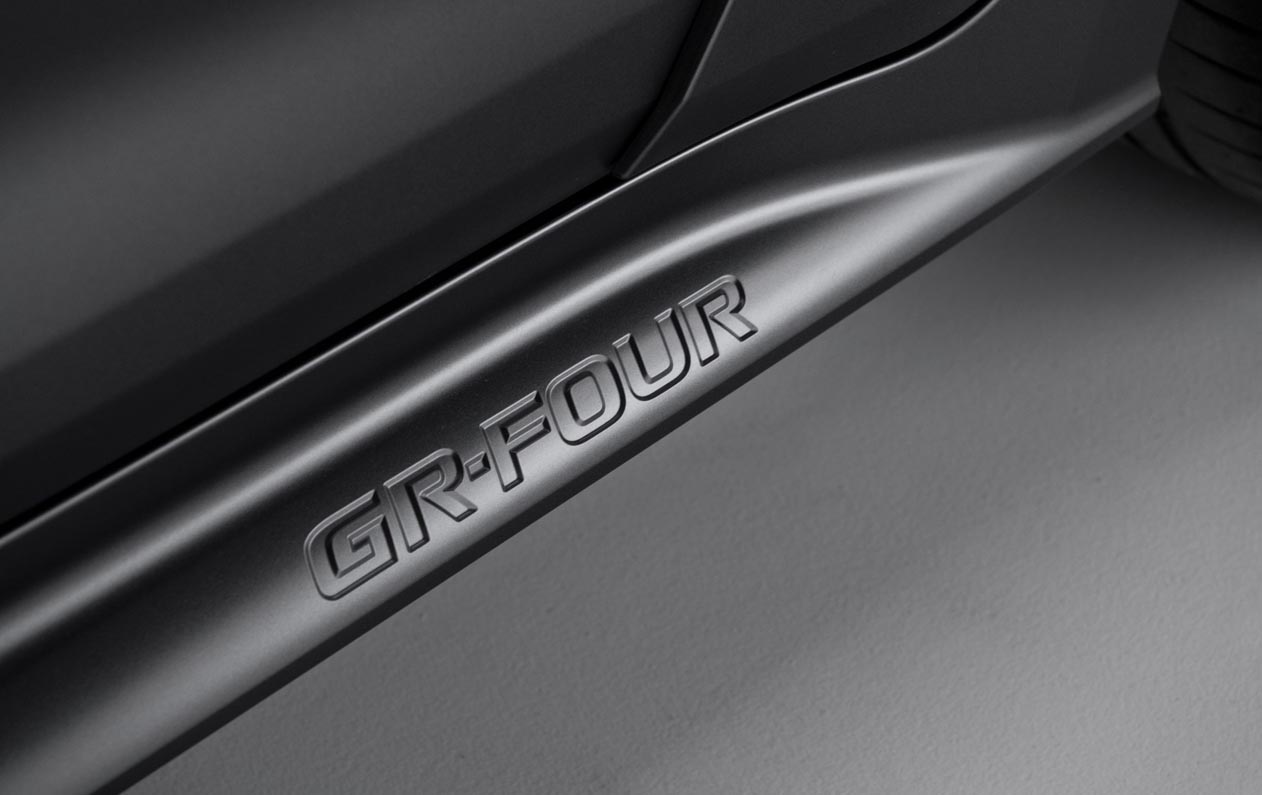