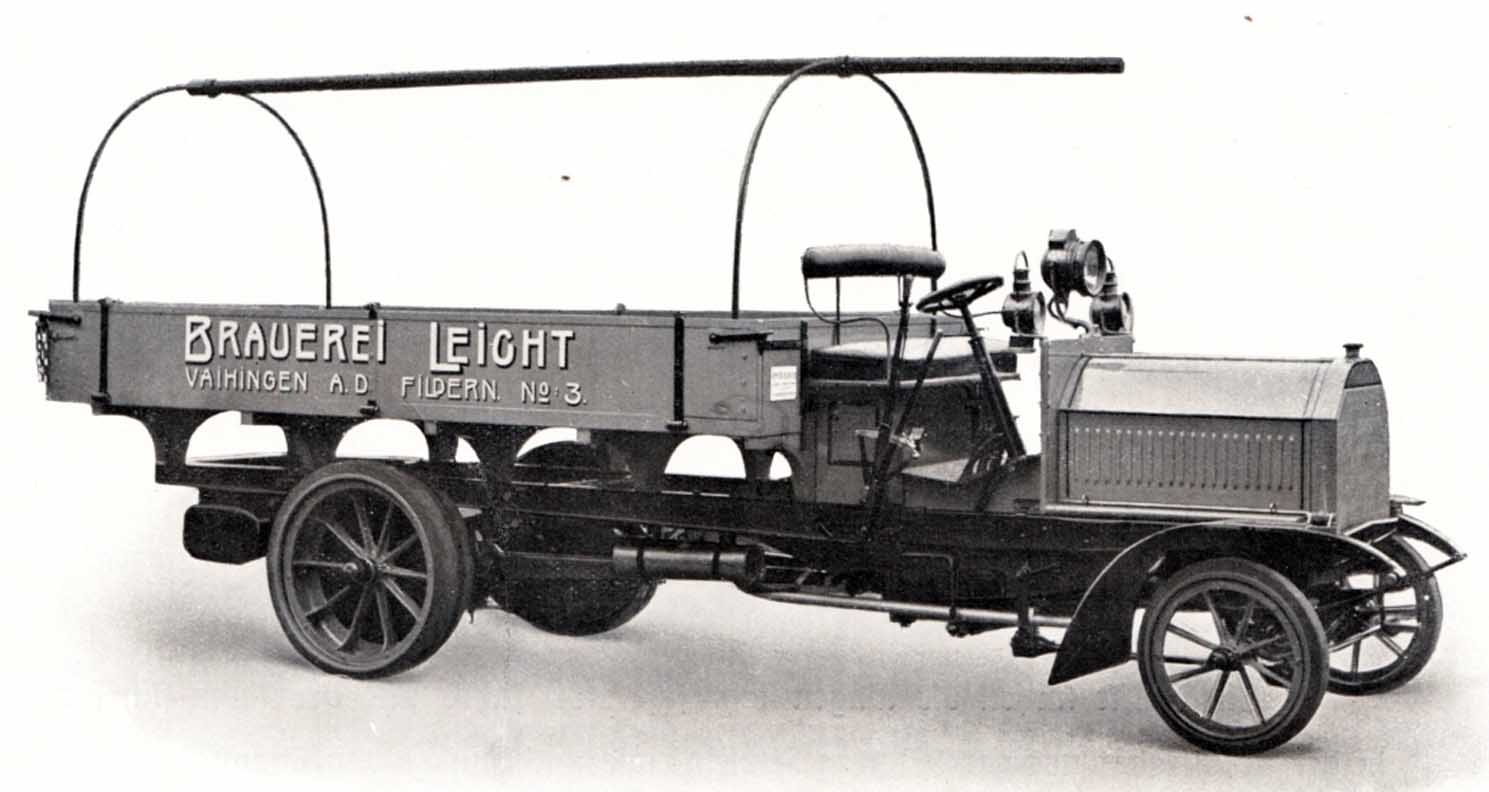 One of the greatest talents of inventor Gottlieb Daimler was finding new areas of application for his engine. He invented the motor cycle, then went to the motorised trolley car, a motorised firefighting hose and then, almost inevitably, to the truck in the year 1896.

Pragmatism was behind the design of the first truck in the world, which looked like a cart with an engine and without a drawbar. The engine, called “Phoenix”, was a four-horsepower-strong two-cylinder engine located at the rear, with a displacement of 1.06 litres, originating from a car. Daimler linked it to the rear axle by means of a belt. There there were two helical springs to protect the engine, which was sensitive to vibrations. The vehicle rolled on hard iron wheels, after all. Daimler steered the leaf-sprung front axle by means of a chain. The driver sat up front on the driving seat as with a carriage. The engine was at the rear of the vehicle. The fuel consumption was approximately six litres of petrol per 100 kilometres. In the terminology of the day, that would be “0.4 kilogrammes per horsepower and hour”.

Far-sighted technology in the first truck

It is noteworthy that the first truck already anticipated 125 years before the planetary axles that are still common today in construction vehicles: because the belt drive sent the power from the engine to a shaft fitted transversely to the longitudinal axis of the vehicle, both ends of which were fitted with a pinion. Each tooth of this pinion meshed with the internal teeth of a ring gear which was firmly connected with the wheel to be driven. This is how the planetary axles of the heavy Mercedes-Benz Trucks up to the current Arocs series have worked in principle.

The basis of today’s truck is created

In 1898, for example, Gottlieb Daimler and Wilhelm Maybach shifted the two-cylinder Phoenix engine of the six-hp vehicle, which had been located at the rear, to a position under the driver’s seat, with the four-gear belt drive also being transferred forward. However, this solution still left a certain amount to be desired. In the same year, the truck was then given the face which clearly distinguished it from the car and was to level the path towards ever-increasing output and payload: the engine was then placed right at the front, in front of the front axle. It conveyed its ten horsepower via a four-gear belt drive and a front-to-rear longitudinal shaft and pinion to the internal ring gears on the iron wheels at the rear. For these vehicles, Daimler made the crucial improvement not only to the drivetrain, but to the engine itself. Instead of a hot tube ignition, the new low-voltage magnetic ignition from Bosch ignited the petrol-air mixture in the cylinders of the 2.2-litre two-cylinder engine, and the radiator had a completely new design.

The first customer test at a brickworks

However, Gottlieb Daimler – probably because of the large number of innovations – was cautious at first before presenting his new five-tonner to the public. The vehicle which was highly modern at the time underwent “Customer testing” which is how the test procedure would be called today. For months, Daimler subjected his new five-tonner to the daily grind of work at a brick factory in Heidenheim, and he painstakingly remedied the shortcomings it showed.

Daimler trucks have always been international

The first purchaser of the very first truck came from the home of industrialisation: England. There, steam-driven vehicles had long since made the shift from rails to the road, and did not die out until the 1950s. It was a good thing that the Red Flag Act was abolished in 1896. Nevertheless, it was not until 1901 that a truck proved itself to be superior to a contemporary steam-driven wagon in a comparison test carried out in Liverpool.

In Paris too the Daimler truck was a welcome guest. Gottlieb Daimler undertook the long journey to vibrant Paris to publicise his new product at the world exhibition. There, an automobile show was held in the Tuileries park, following a contest organised by the Automobile Association of France on the subject of “motorised vehicles for city travel”; at the exhibition, Gottlieb Daimler presented his new five-tonner and a four-horsepower-strong belt-driven vehicle. “Huge crowds of people, many vehicles of all kinds and our truck are very popular,” Daimler’s wife Lina noted with satisfaction in June 1898.

The Daimler Manufacturing Company ( DMFG ) was an American production company from 1898 to 1907. From 1888 to 1898, the company was known as the Daimler Motor Company (DMC), founded as part of a partnership between Gottlieb Daimler of the Daimler-Motoren-Gesellschaft and William Steinway of the piano manufacturers Steinway & Sons. The company, with its headquarters in Long Island City, Queens, New York City, close to the headquarters of Steinway in Astoria, sold Daimler engines for yachts and launches as well as for commercial vehicles such as buses and trucks.

And, as with Benz, the commercial vehicle production of the Daimler-Motoren-Gesellschaft (DMG) did not remain at the headquarters for long. In 1897 the chairman of the board of DMG, Max von Duttenhofer, had behind Daimler’s back sealed a pact with the Berlin company Ad. Altmann & Co., which was to set up further large production premises for motorised vehicles. In February 1899 the factory started production based on Daimler’s latest design plans and patents, creating stiff competition for the Daimler vehicles made in Stuttgart. Cars with electric motors based on patents of the American manufacturer Columbia were included in the range, as were carriage-like passenger cars and a wide variety of commercial vehicles. After the death of Gottlieb Daimler in 1900, the DMG shareholders’ meeting resolved to take over the company located in Berlin-Marienfelde as the Berlin-Marienfelde branch. Now considerably larger, there followed a division of roles within the corporation: Cannstatt and shortly afterwards the new factory in Untertürkheim, Stuttgart, concentrated on building cars, whereas Marienfelde took care of trucks and buses.

The second generation of Daimler trucks manufactured from 1899 to 1903 consisted of new basic types with a payload of between 1.25 and 5.0 tonnes, for which two-cylinder and four-cylinder engines from four to twelve horsepower were sufficient.

In detail, the almost complete range of the DMG in 1905 comprised: light vans with three payload classes from 500 kg 1000 kg to 1500 kg payload, powered by two-cylinder engines with eight to sixteen hp. Four-cylinder engines with 16 to 35 hp powered the heavy-duty class with two to five tonnes payload.

The first trucks made by Karl Benz belong to the gene pool of today’s trucks: Benz motorised trucks

In 1900, Karl Benz took the plunge, progressing from the van to the real truck. The first range consisted of three models: the lightest version (1250 kilogrammes payload) was powered by a five to seven-hp-strong one-cylinder engine, the medium-duty version for 2.50 tonnes payload used a ten-hp-strong one-cylinder engine and the heavy-duty model for 5.0 tonnes payload had a two-cylinder Contra engine which achieved fourteen horsepower. What all three had in common was that the engine was no longer in the rear, but at the front, and positioned horizontally, and it drove the rear axle via a four-gear transmission and chain.

The basis for the truck was prepared

The basis for the truck was now prepared. The Industrial Revolution picked up speed and mass-produced goods came on the markets. The demand for distribution haulage grew. In 1871 the customs restrictions in the German Empire had been abolished. The history of road transport and the history of trade and road-building are more closely linked than generally thought. 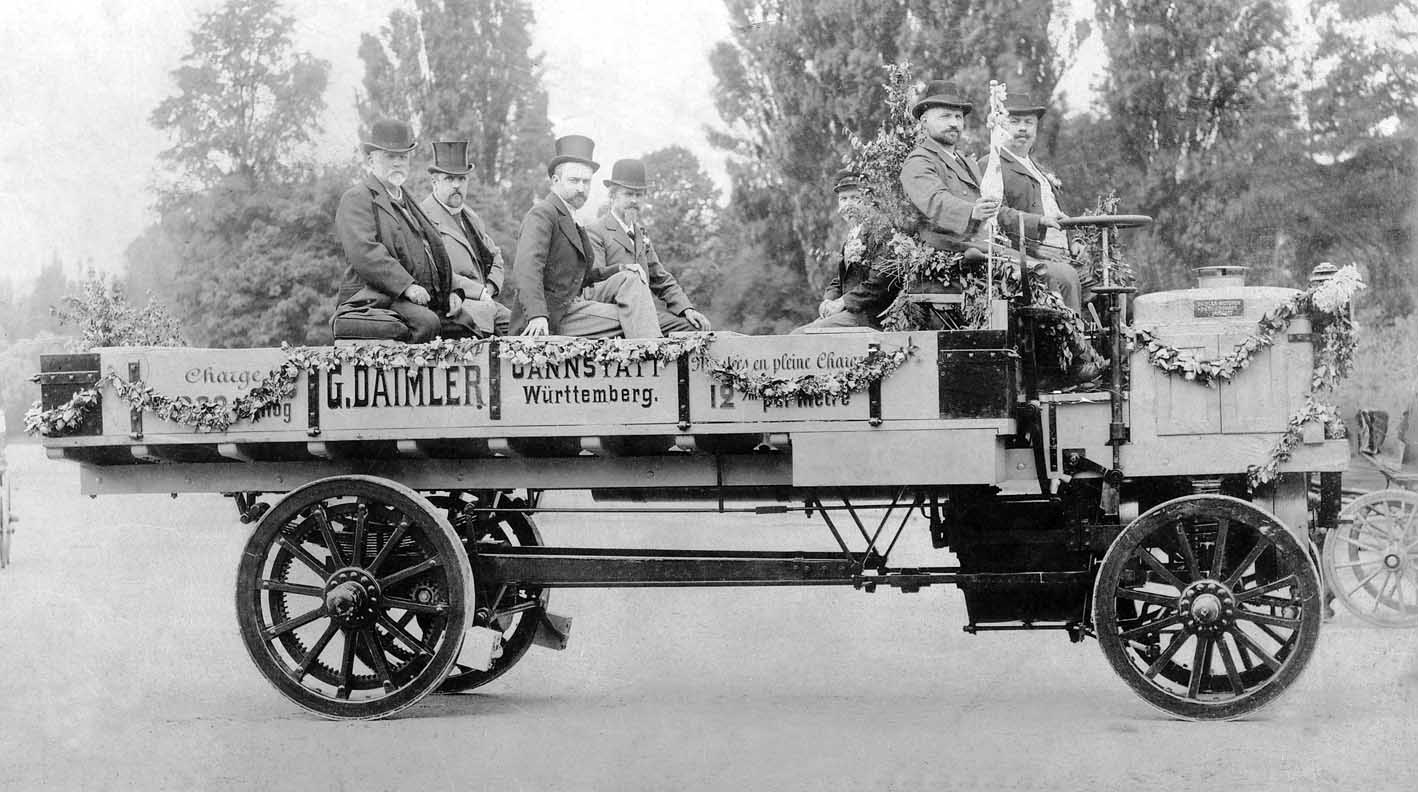 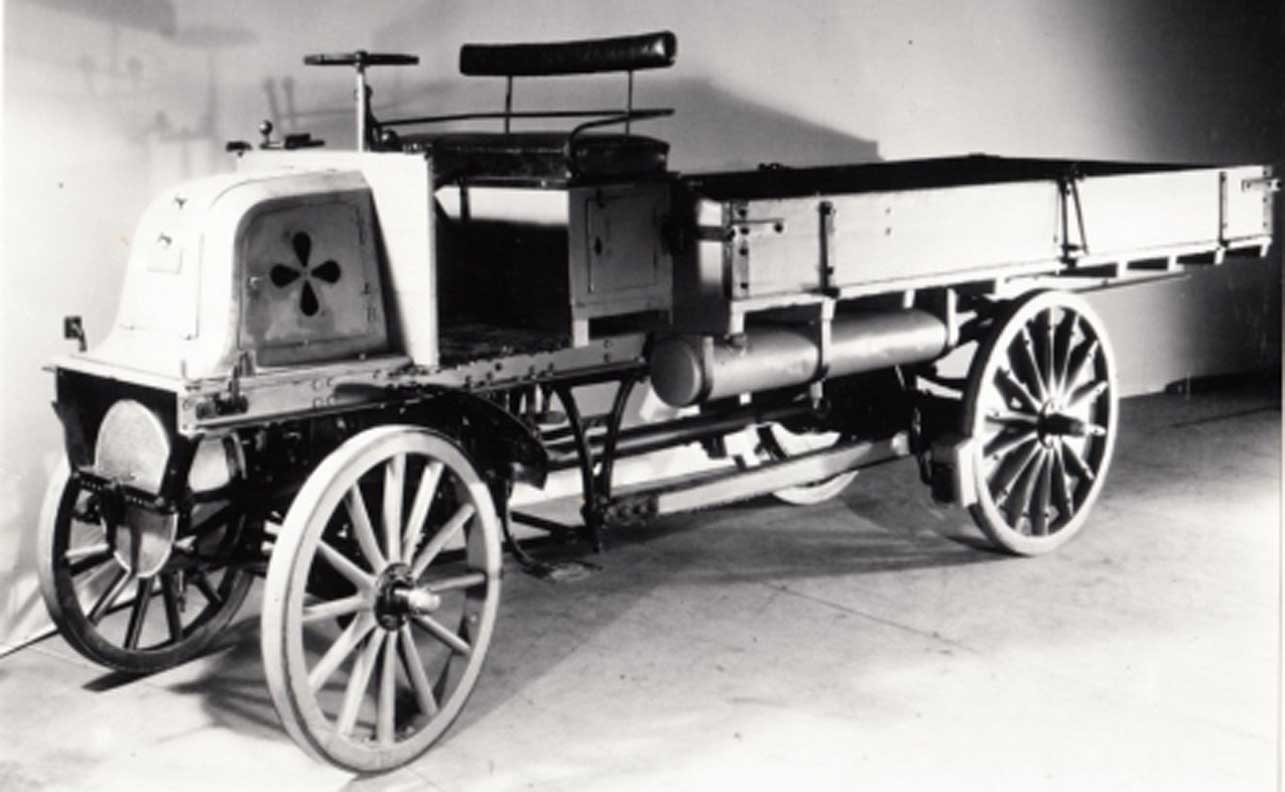 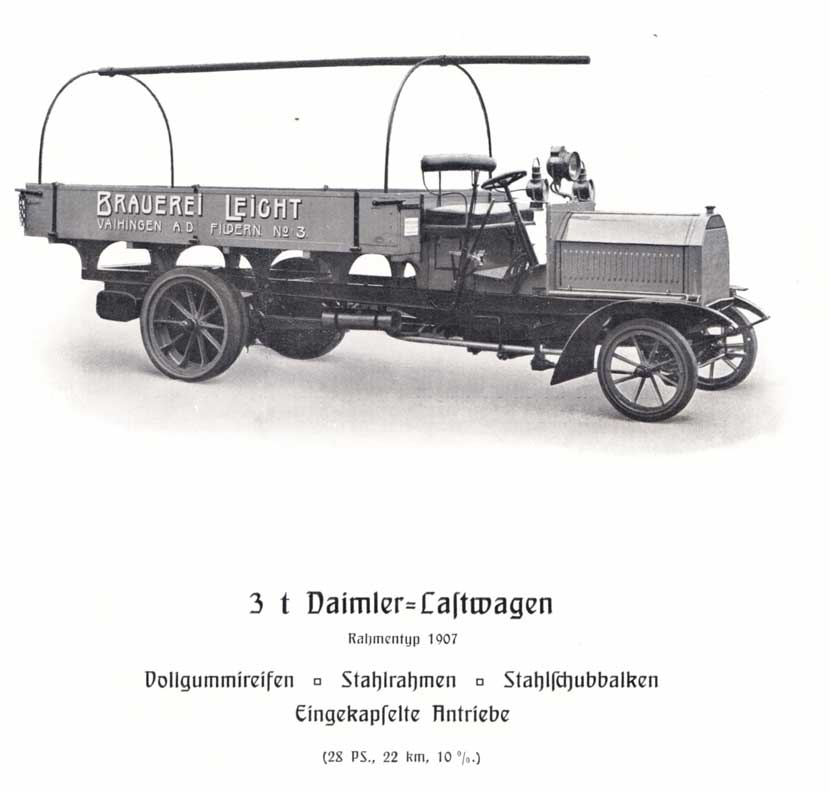 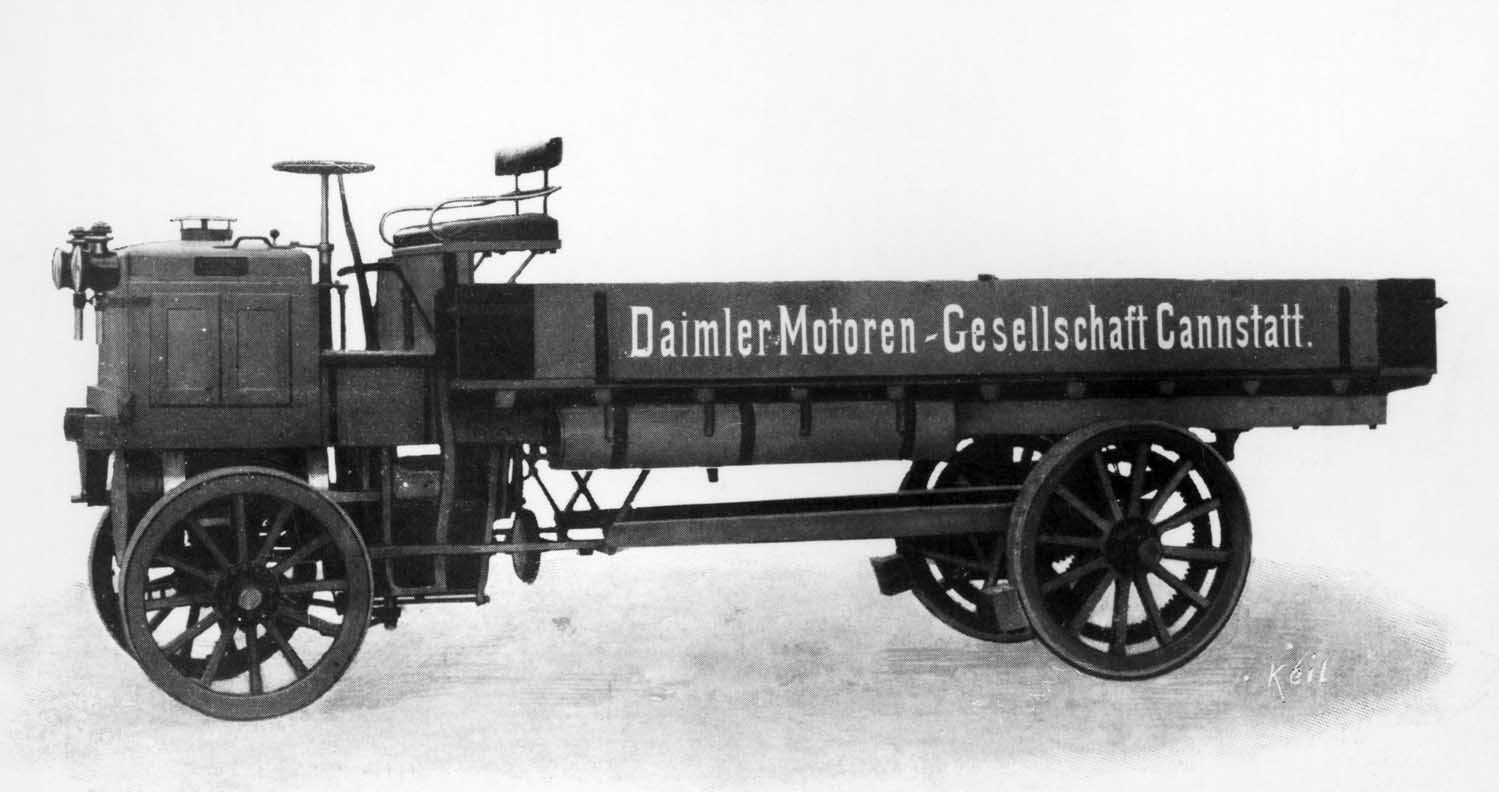 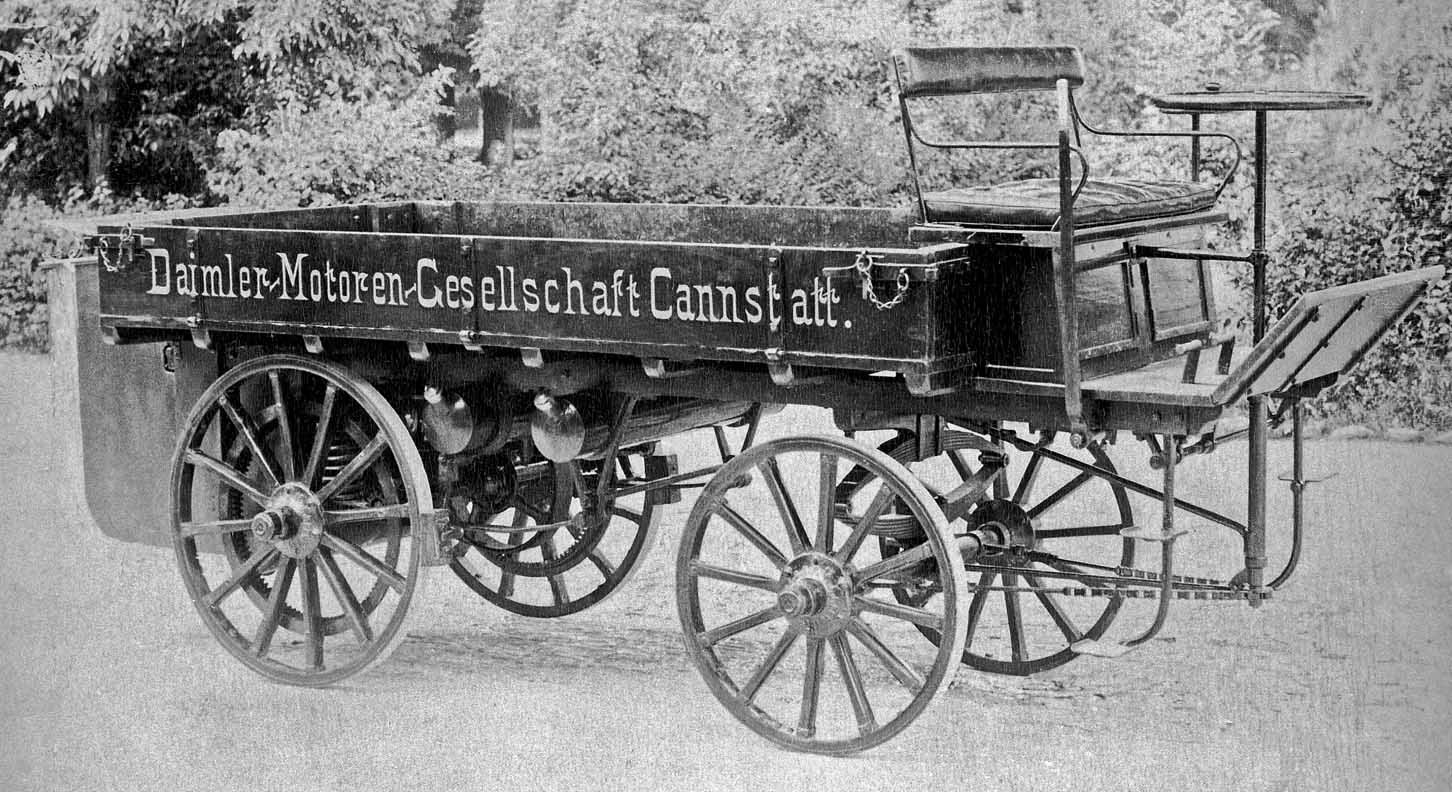 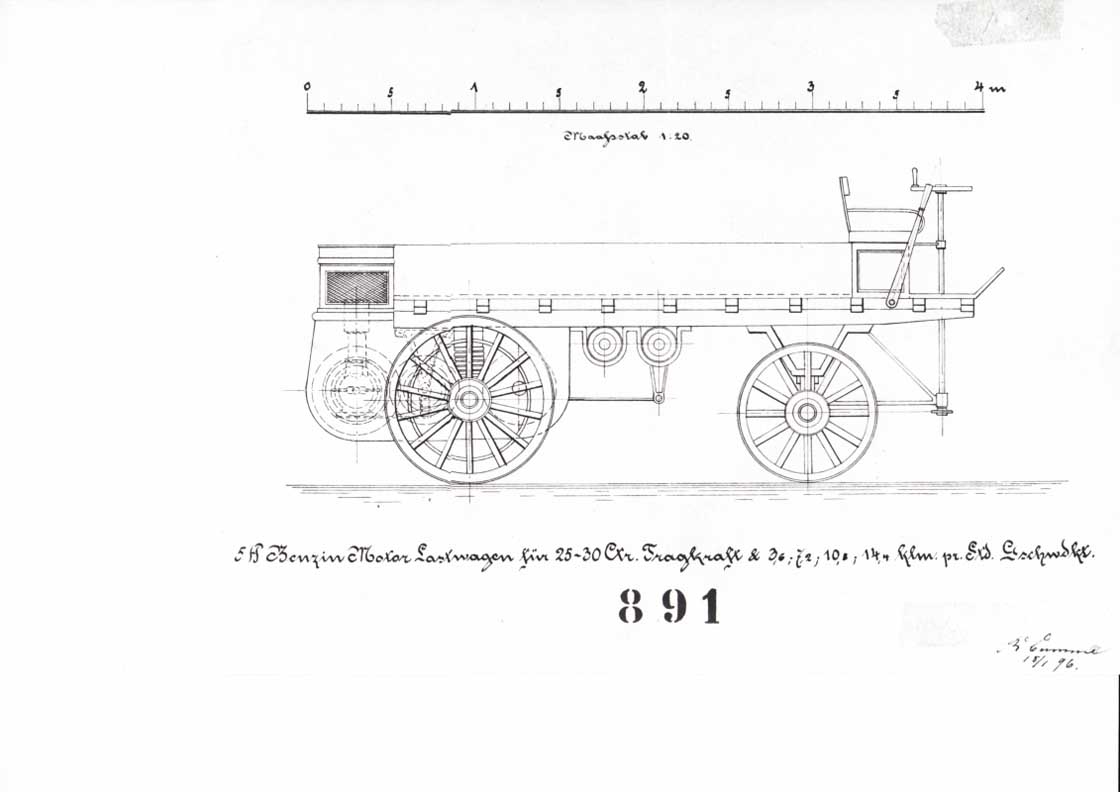 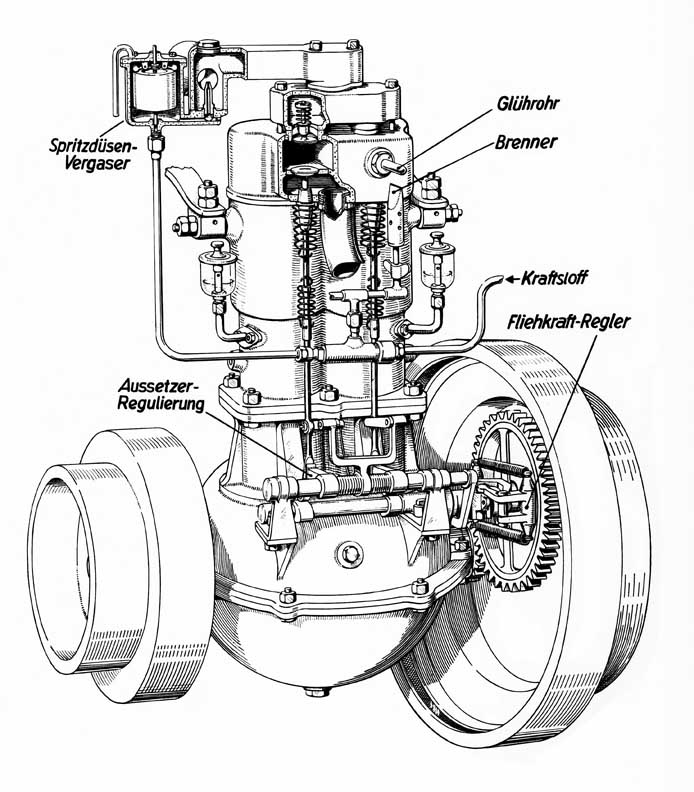 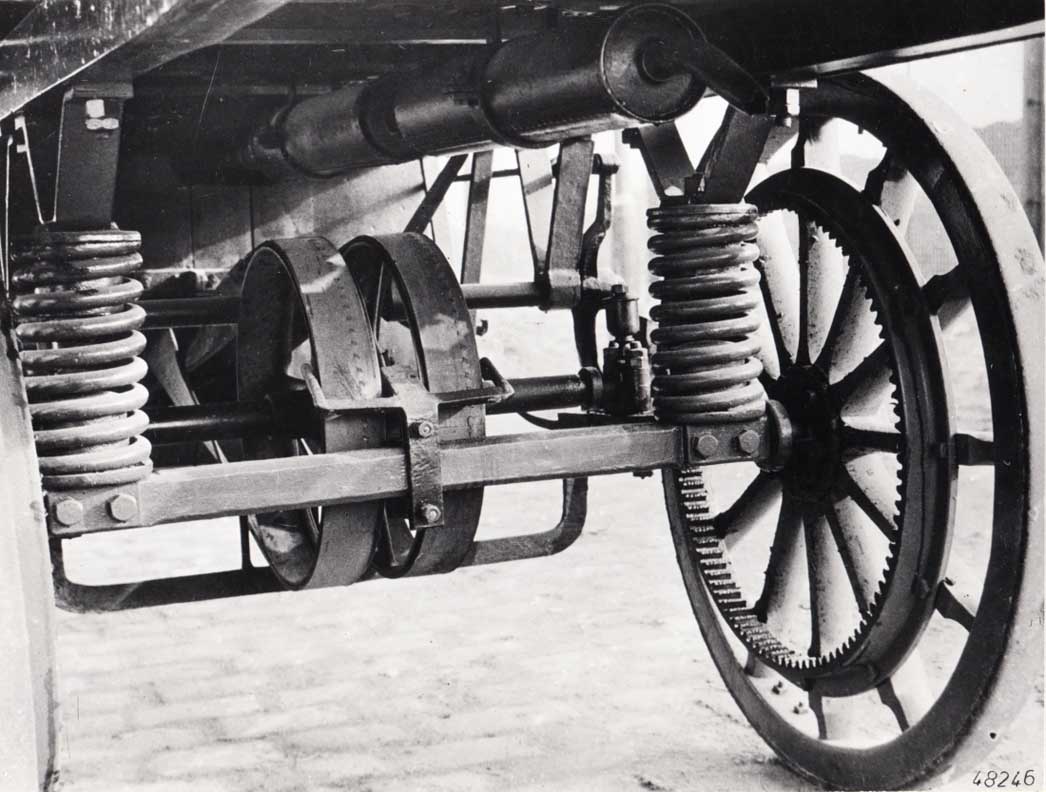 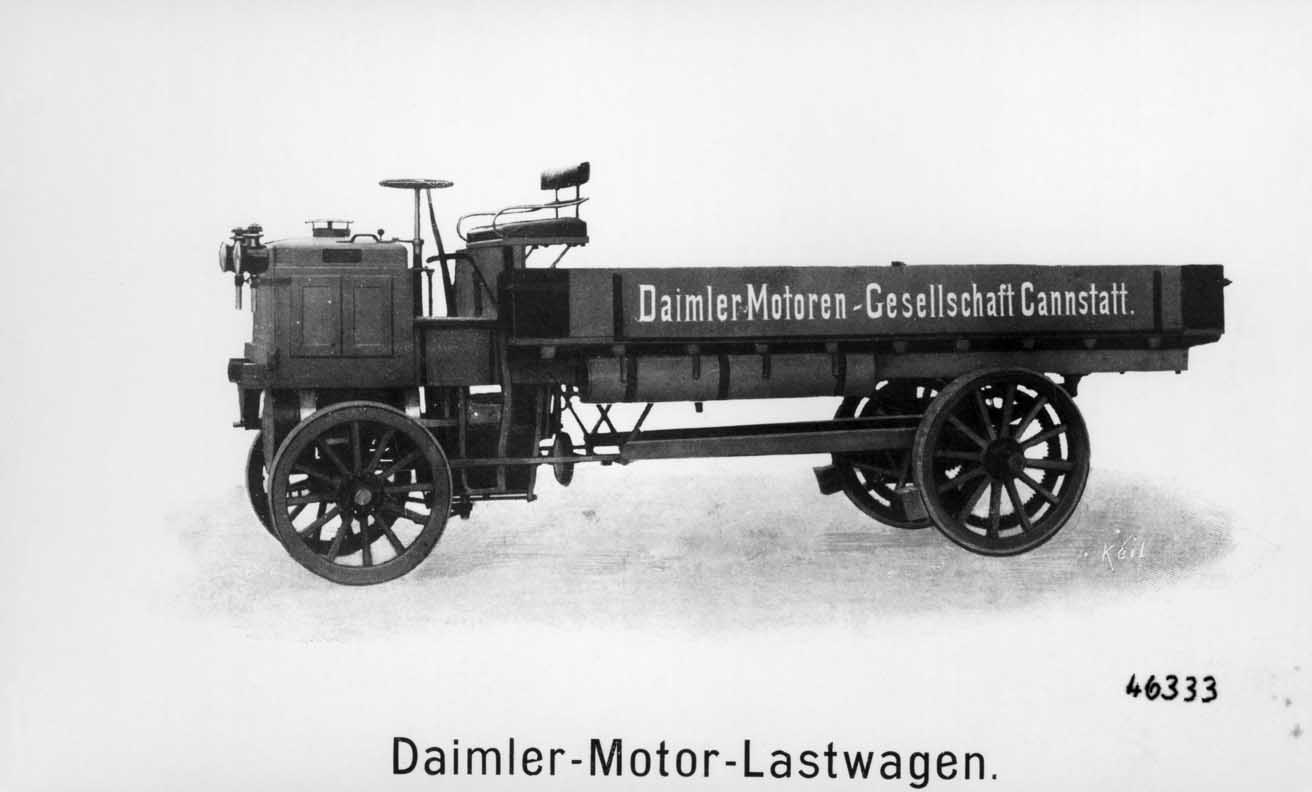