Sales Release For The Mercedes-AMG SL 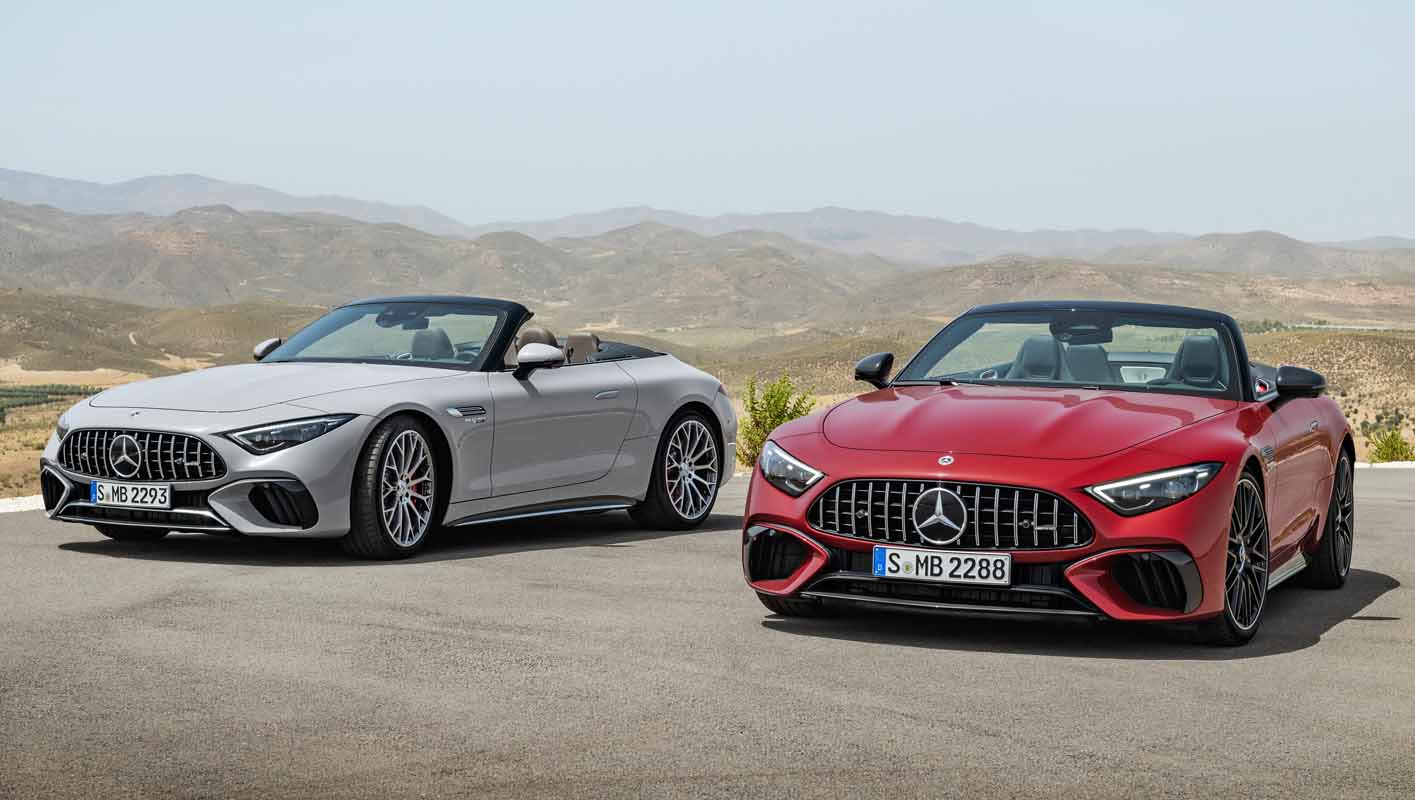 The new Mercedes‑AMG SL is now available to order, in a happy coincidence with the start of spring in the calendar last Sunday. The new edition of an icon returns to its roots with a classic soft top and sporty character. At the same time the luxurious roadster, as a 2+2‑seater, is particularly suitable for everyday use and brings its power to the road here for the first time with the fully variable AMG Performance 4MATIC+ all-wheel drive. The SL 55 4MATIC+ (fuel consumption combined 13.0‑12.2 l/100 km, CO2 emissions combined 294‑277 g/km)[1] starts at the base price[2] of 158,240.25 euros; the SL 63 4MATIC+ (fuel consumption combined 13.0‑12.5 l/100 km, CO2 emissions combined 294‑282 g/km) is available from 187,097.75 euros. High-tech components such as the AMG ACTIVE RIDE CONTROL suspension with active anti-roll stabilisation, rear-axle steering, the optionally available AMG ceramic high-performance composite braking system and the standard-fit DIGITAL LIGHT with projection function sharpen the sporty specification. In combination with the AMG 4.0‑litre V8 biturbo engine, this results in a driving experience of the highest order. Numerous options also offer a broad spectrum of individualisation from sportily dynamic to luxuriously elegant, depending on the customer’s wishes.

The legend of the “SL” celebrates a milestone birthday this year: exactly 70 years ago, a sports car saw the light of day in Stuttgart and immediately became a legend. With the road-going 300 SL racing sports car (internal designation W194), the Mercedes‑Benz brand accumulated one success after another on the world’s racetracks from 1952 onwards, and the SL model name quickly became a legend as a result. The successful racing car was followed in 1954 by the 300 SL production sports car (W198), which became known as the “Gullwing” because of its unusual doors. Other milestones in the model’s history were the “Pagoda” (W113, 1963-1971), the evergreen R107 (1971-1989), which was built for 18 years, and its successor, the R129 (1989-1995).

This tradition is now being continued by the latest generation of the SL, developed completely independently by Mercedes‑AMG. Two output levels of the AMG 4.0-litre V8 biturbo engine are available at the start of sales. The engines are assembled entirely by hand at the company’s site in Affalterbach according to the “One Man, One Engine” principle. In the top model, the SL 63 4MATIC+, the drivetrain develops 430 kW (585 hp) and

Both models feature the AMG SPEEDSHIFT MCT 9G transmission as standard, which combines an emotively appealing gearshift experience with extremely short shift times. AMG Performance 4MATIC+ all-wheel drive technology is standard on both V8 models: its fully variable torque distribution between the front and rear axles ensures optimum traction at the physical limit as well as high driving stability and driving safety under all conditions. For the first time, a series-production Mercedes‑AMG vehicle also features a multi-link front suspension with five control arms arranged entirely within the rim. This significantly improves the kinematics. At the rear axle, a 5‑link design likewise controls the wheels.

The SL 55 4MATIC+ drives with a newly developed AMG RIDE CONTROL steel suspension equipped with particularly high-performance aluminium shock absorbers and lightweight coil springs. Optional for that model, standard for the SL 63 4MATIC+: the innovative AMG ACTIVE RIDE CONTROL suspension with active, hydraulic roll stabilisation. The system enables optimal cornering and load-change behaviour, with AMG-typical driving characteristics in terms of dynamics, precision and feedback for the driver. At the same time, it increases ride comfort when driving in a straight line and over bumps.

For the first time in the long history of the SL, the V8 models are equipped with active rear-axle steering (HAL) as standard. Depending on the speed, the rear wheels steer either in the opposite direction (up to 100 km/h) or in the same direction (faster than 100 km/h) as the front wheels. The system thus enables both agile and stable driving behaviour. 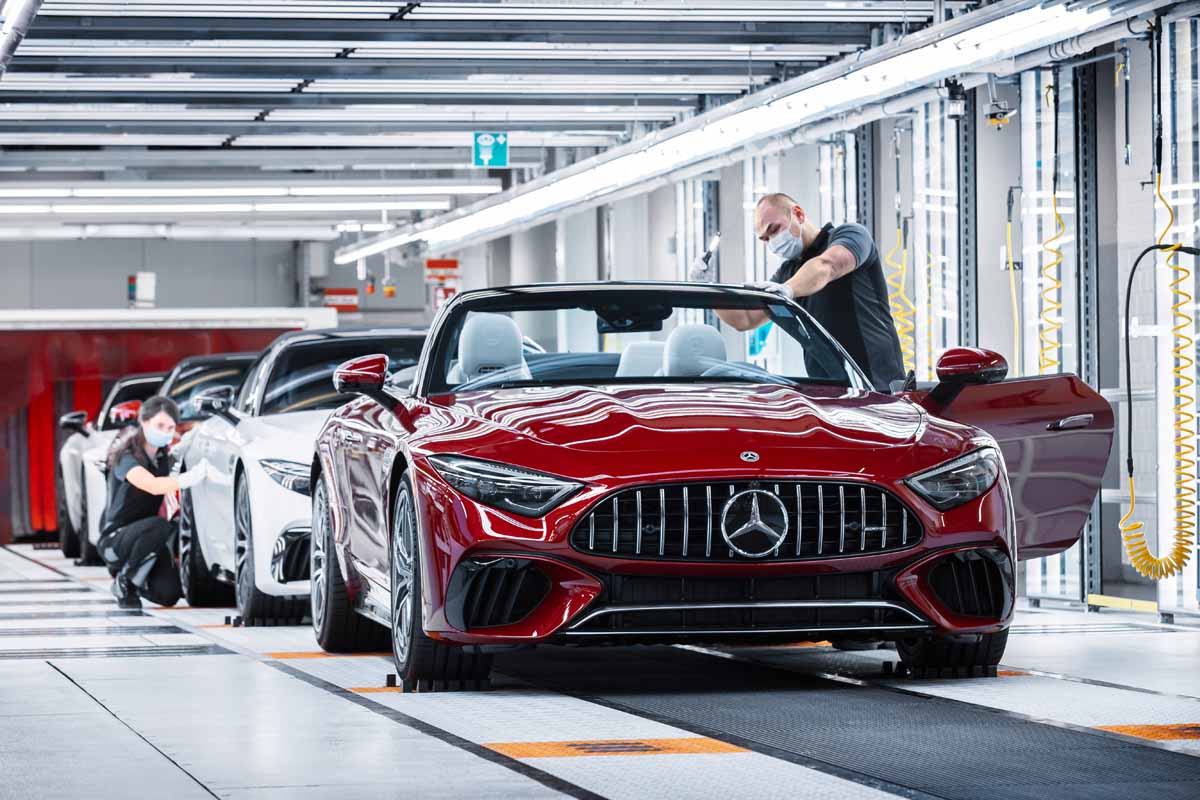 The SL equipment range: great variety for an individual look

Like its predecessor, the new SL also comes off the production line at the Mercedes‑Benz assembly plant in Bremen. It is thus the first vehicle developed entirely by Mercedes‑AMG to be built at this location. The use of automated guided vehicles (AGVs) ensures the delivery of materials direct to the production lines. State-of-the-art technology is also found at the ‘wedding’ station, the heart of every assembly hall: the V8 engine, supplied “just in time” from Affalterbach, is connected to the body here.

Technical data at a glance

2  The values stated are the determined “WLTP CO2 values” in the sense of Article 2 No. 3 Implementing Regulation (EU) 2017/1153. The fuel consumption figures were calculated on the basis of these figures.

[1]  The figures shown are the WLTP CO2 values measured according to Article 2 No. 3 Implementing Regulation (EU) 2017/1153. The fuel consumption figures were calculated on the basis of these figures. 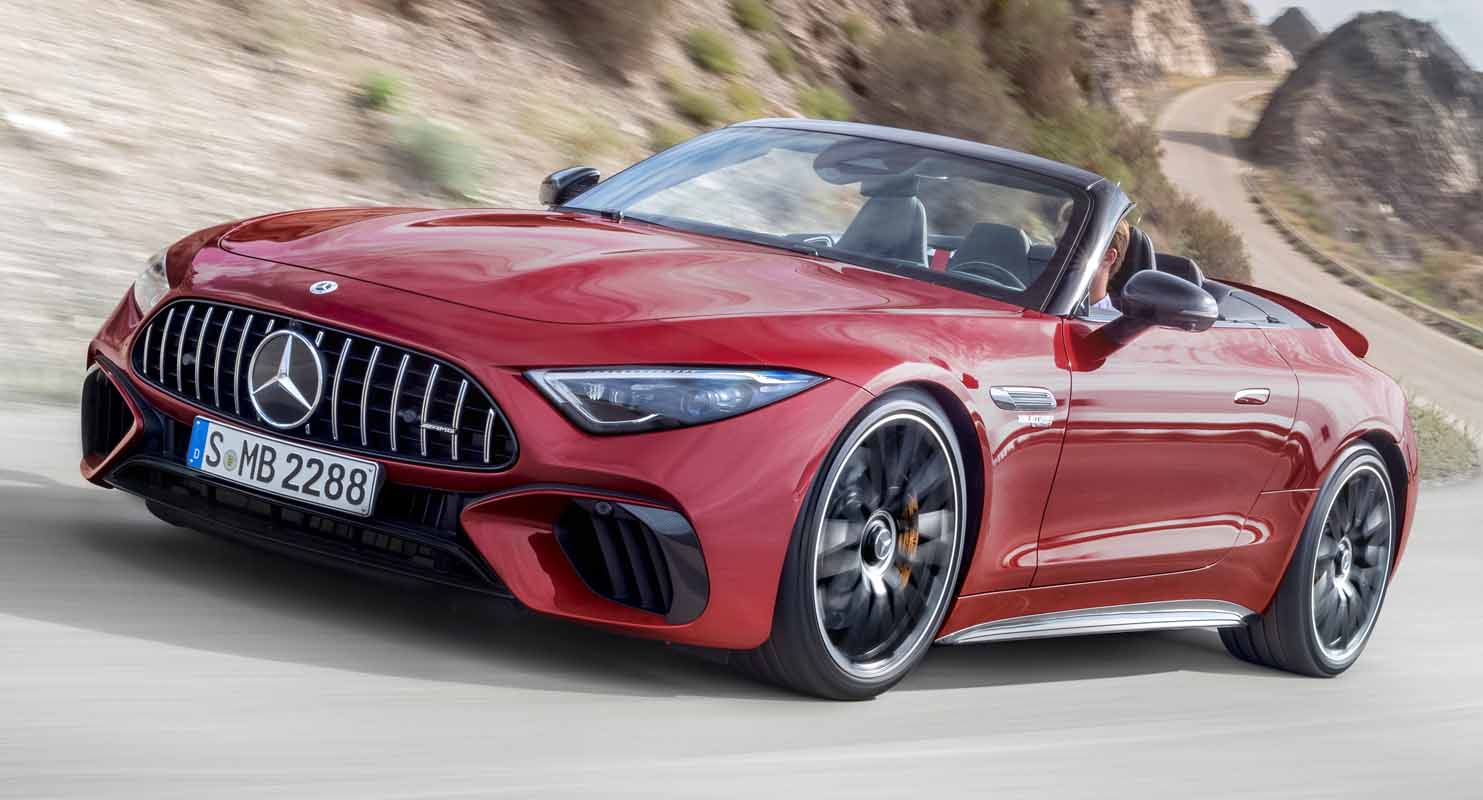 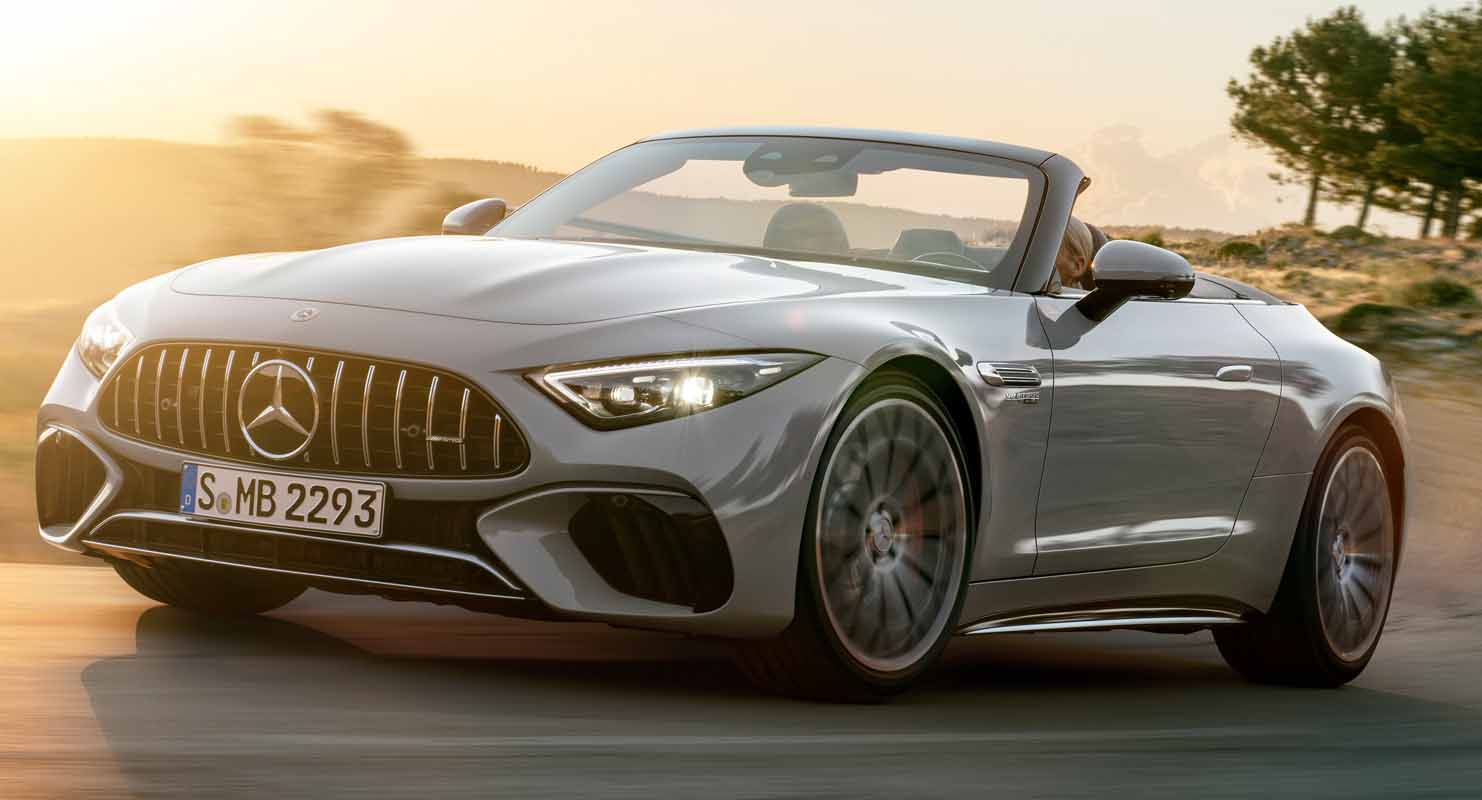 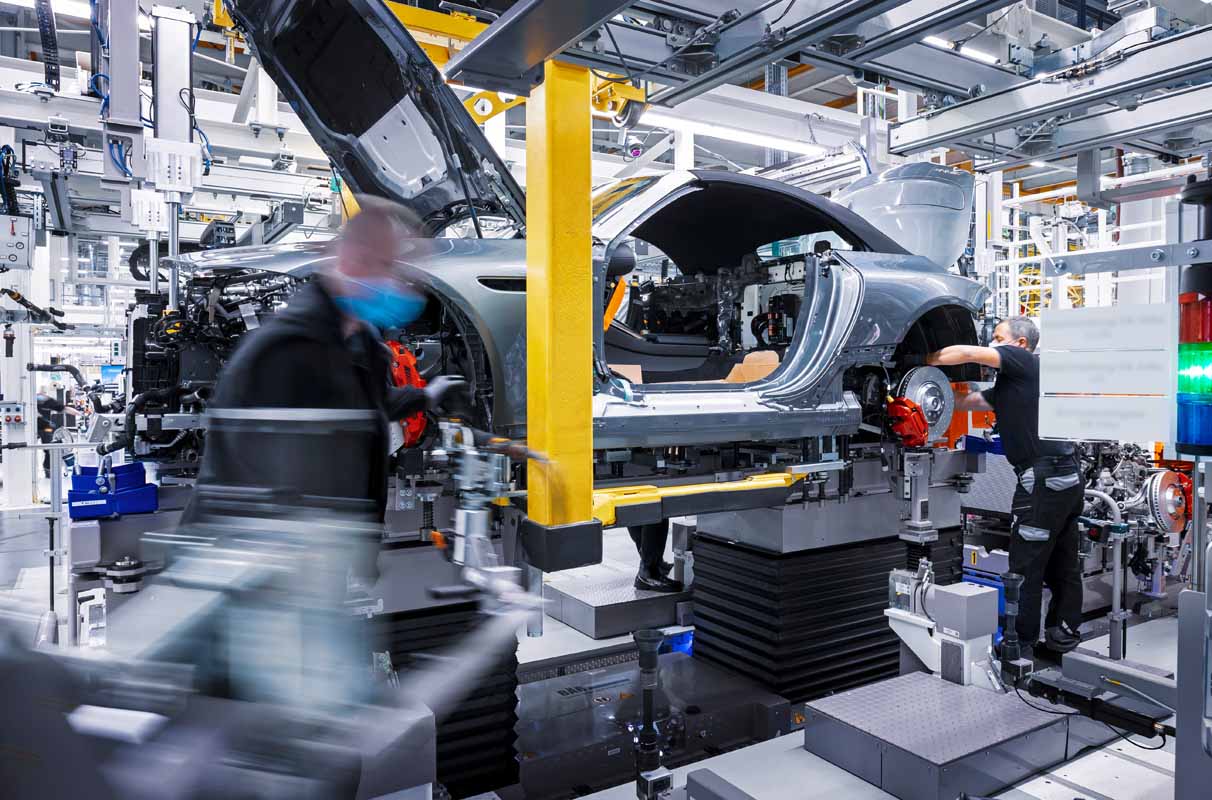