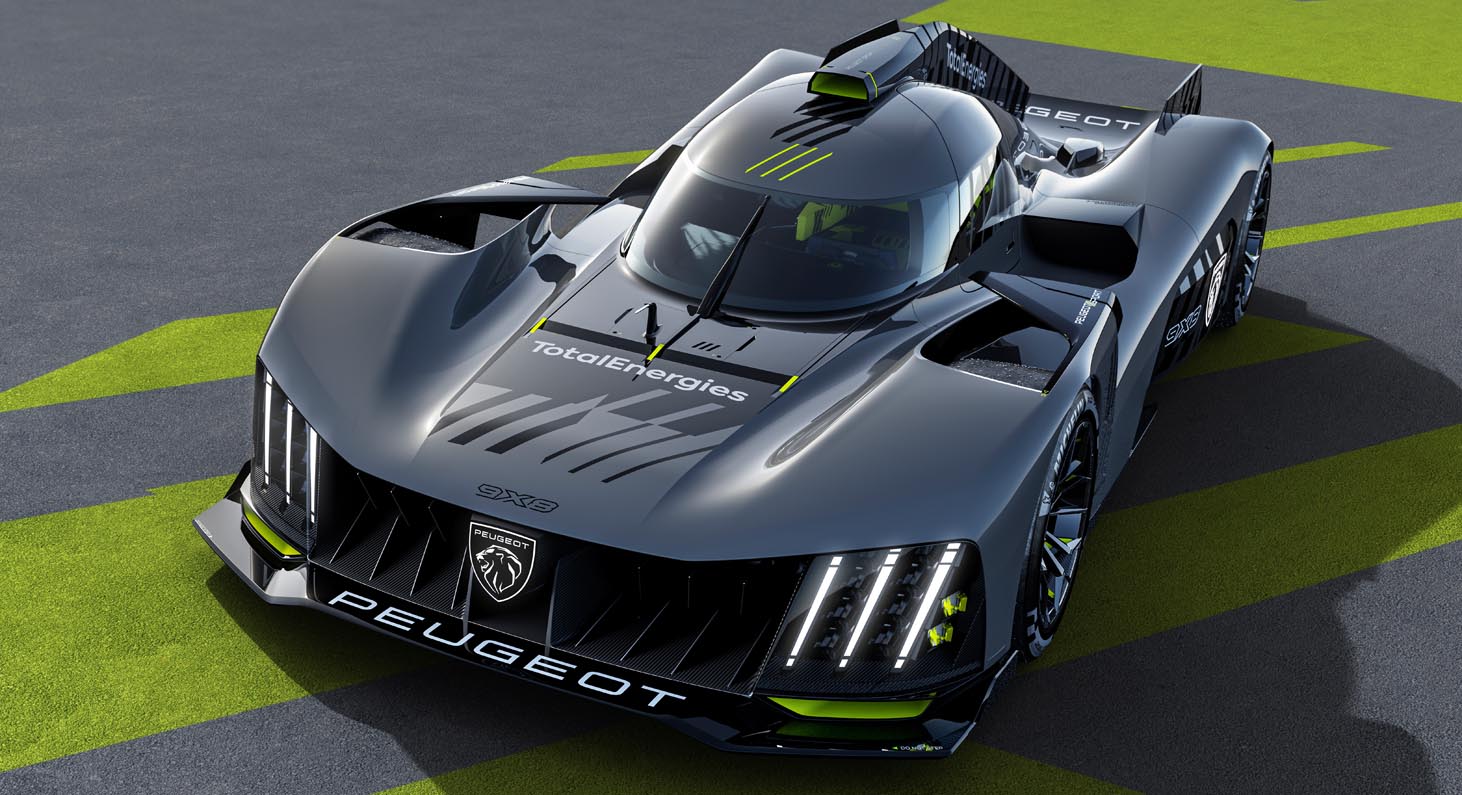 PEUGEOT has taken the wraps off the new 9X8, its latest-generation Hypercar challenger which is poised to make its competitive debut in the FIA World Endurance Championship (FIA WEC) in 2022. Powered by a hybrid power unit which drives through all-wheel drive transmission, this hyper-efficient prototype fits perfectly with PEUGEOT’s Neo-Performance strategy which is geared to both its road and racing cars delivering responsible performance. The work of PEUGEOT SPORT’s engineering team and PEUGEOT Design dovetailed like never before to produce the 9X8 which heralds a new era in motor racing due to its flowing lines, the absence of a rear wing and the strong brand identity it exudes. The innovative technical solutions it packs and its catlike stance stand out as unmistakable PEUGEOT hallmarks.

The PEUGEOT 9X8 – the brand’s latest endurance racing contender – is a direct successor to the PEUGEOT 905, winner of the Le Mans 24 Hours in 1992 and 1993, and the PEUGEOT 908, which won the French classic in 2009. The new prototype is poised to continue the make’s long and successful involvement in world-class motorsport with highly competitive cars that feature strong, instantly-recognisable brand identity.

The PEUGEOT 9X8 is a brand-driven project in accordance with its Neo-Performance vision which is founded on combining a premium sporting pedigree with styling excellence, efficiency and technological expertise that can be carried over to road cars.

Unprecedented collaboration between PEUGEOT’s Design and Engineering teams and PEUGEOT Sport is effectively making a decisive difference when it comes to exploring new aerodynamic solutions and styling ideas to create a completely original product line.

The PEUGEOT 9X8’s forms and aerodynamic characteristics are similarly the fruit of the pooled input of the development engineers working under the responsibility of PEUGEOT Sport Technical Director Olivier JANSONNIE and the design team led by PEUGEOT Design Director Matthias HOSSANN.

Their approach was governed by the regulations drawn up by the FIA (Fédération Internationale de l’Automobile) and ACO (Automobile Club de l’Ouest) for new the Le Mans Hypercar (LMH) class which succeeds from endurance racing’s former LMP1 headlining category. The greater flexibility allowed by the sport’s new technical rules regarding aerodynamics permits radical new thinking that favours the emergence of innovative cars, with scope for the design teams to make an even bigger contribution. PEUGEOT’s engineers and designers effectively took advantage of this opportunity to invent new creative processes and break away from established codes to produce a Hypercar of a completely new genre.

A name that blends the notion of heritage with forward-thinking
The name of PEUGEOT’s new Hypercar challenger is the PEUGEOT 9X8.

The “X” refers to the PEUGEOT Hypercar’s all-wheel drive technology and hybrid powertrain which embodies the brand’s electrification strategy in the world of motor racing.

The “8” is the suffix used for all of PEUGEOT’s current model names, from the 208 and 2008, to the 308, 3008, 5008 and, of course, the 508 which very recently passed through the hands of the engineers and designers who crafted the Hypercar to become the first car to sport the Peugeot Sport Engineered label. 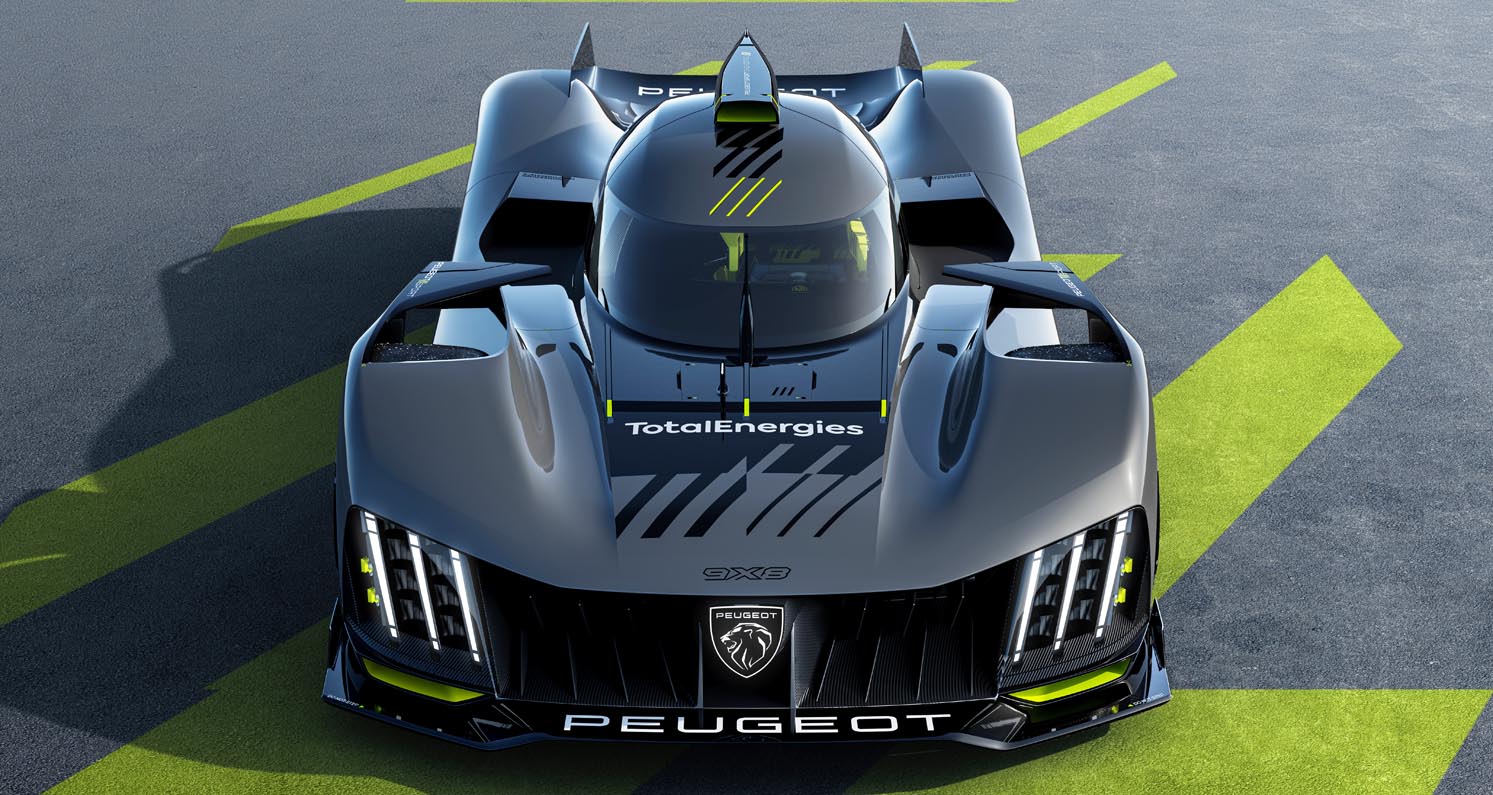 Unprecedented looks and finish
“Since the 9X8 is a PEUGEOT, the original sketch that steered our work portrayed a big cat ready to pounce, a stance which we have suggested by the slightly forward-tilting cockpit”, notes PEUGEOT Design Director Matthias HOSSANN. “The overall lines of the PEUGEOT 9X8 express the brand’s styling cues, while its sleek, racy, elegant forms inspire emotion and dynamism.”

“It is the first racing car to feature styling to this extent,” said Kevin MAGNUSSEN.

The Dane’s words were echoed by American Gustavo MENEZES: “PEUGEOT is opening up a new chapter in motorsport with the 9X8. We will have a part to play in writing the story!”

The 9X8’s front and rear lighting signatures, which take the form of three claw-like strokes, are familiar PEUGEOT trademarks, while the brand’s new lion’s head logo features in backlit form at the front and on the sides of the car. The Selenium Grey and contrasting Kryptonite acid green/yellow highlights of both the body and inside the cockpit echo the colour scheme chosen for the new PEUGEOT SPORT ENGINEERED line which was introduced with the 508 and 508 SW.

The designers also paid exceptional attention to the 9X8’s interior. “We wanted to take a special approach to the cockpit which, until now, has tended to be a purely functional and indistinctive aspect of racing cars, with no brand identity whatsoever,” underlines Matthias HOSSANN. “The combination of our colour scheme and PEUGEOT’s i-Cockpit interior styling signature have provided the 9X8’s cockpit with a distinctive feel and make it immediately identifiable as a PEUGEOT in on-board camera shots.”

Outside, the sculpted wheels contribute to the balanced lines of the car’s uncluttered, sharply-structured flanks, the wing vents reveal the top of the tyres and the perfectly-integrated mirrors contribute to the impression that airflow passes over the car unimpeded.

“I know the teams at PEUGEOT Design and PEUGEOT Sport and they always produce quality, innovative work, but I have to admit to being blown away by the 9X8. It is simply magnificent,” says PEUGEOT’s Chief Executive Officer Linda JACKSON. “The way its innovative, flowing lines exude such a powerful brand identity is masterful.” 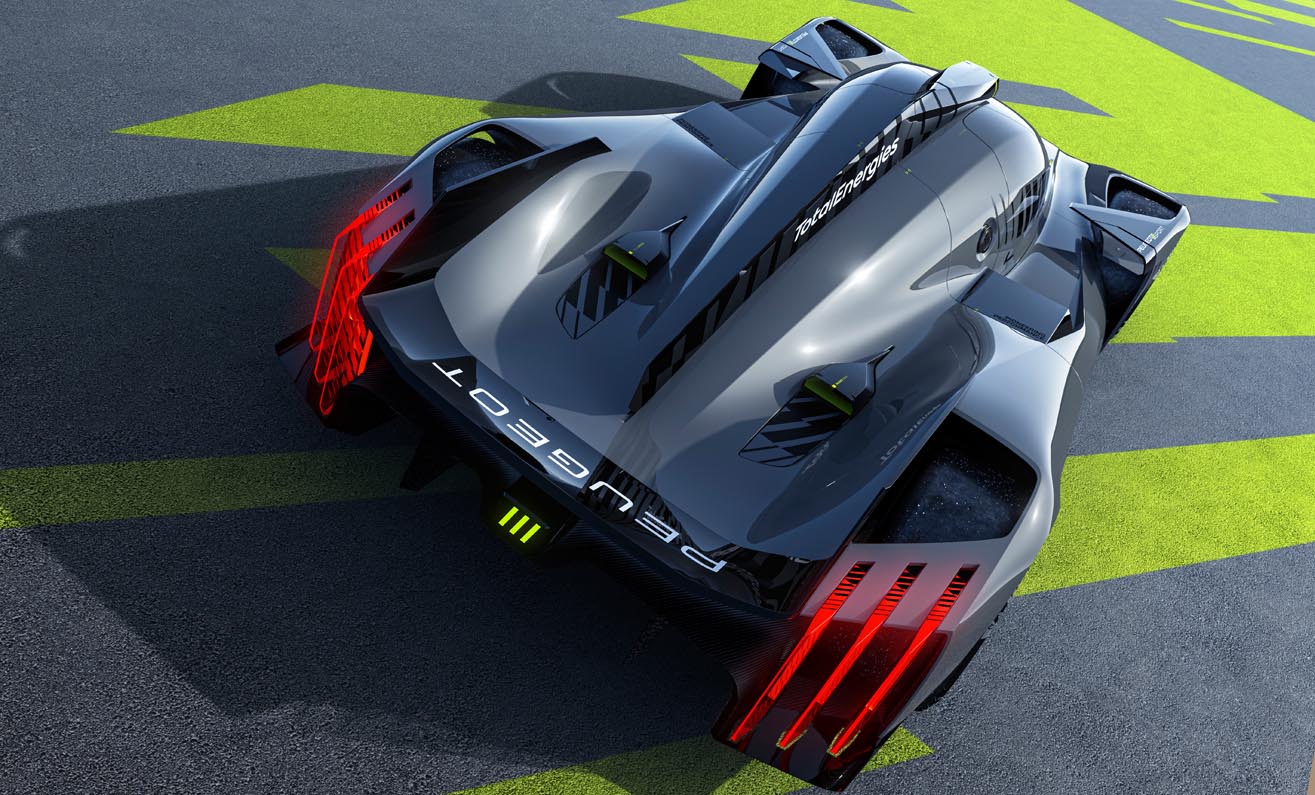 ‘WINGLESS’ – Maximising the potential of the Le Mans Hypercar regulations
The finely-chiselled details of the PEUGEOT 9X8’s rear-end design include the brand’s claw-effect lighting signature, while the lights themselves flank a wide diffusor above which the quip “We didn’t want a rear wing” is written.

Rear wings were first seen at the Le Mans 24 Hours on the Chaparral 2F which contested the race in 1967, so this is the first time their use has been questioned in more than half-a-century. The 9X8’s innovative rear stems from research carried out by PEUGEOT Sport’s engineering team.

“The new Le Mans Hypercar regulations were drawn up to level out the importance of conventional performance-boosting systems,” explains Olivier JANSONNIE, PEUGEOT Sport’s WEC Programme Technical Director. “Designing the 9X8 has been a passionate experience because we had the freedom to invent, innovate and explore off-the-wall ways to optimise the car’s performance, and more especially its aerodynamics. The regulations stipulate that only one adjustable aerodynamic device is permitted, without specifying the rear wing. Our calculation work and simulations revealed that high performance was effectively possible without one.”

“The absence of a rear wing on the PEUGEOT 9X8 is a major innovative step,” says Stellantis Motorsport Director Jean-Marc FINOT. “We have achieved a degree of aerodynamic efficiency that allows us to do away with this feature. Don’t ask how, though! We have every intention of keeping that a secret as long as we possibly can!”

Doing away with a rear wing provided the freedom to design the sort of sleek silhouette that hasn’t been seen for decades. Indeed, working hand-in-hand with their engineer colleagues, the designers made the most of the opportunity to create a harmonious blend of dynamic, sculpted shapes which form a clean, sweeping surface between the prominent wheel arches.

Hyper-efficient hybrid powertrain
Since the announcement in September 2020 of PEUGEOT’s involvement in endurance racing’s new Le Mans Hypercar class, the factory in Versailles, near Paris, has been working feverishly on the 9X8.

As planned, the car’s rear-mounted, 2.6-litre, bi-turbo, 500kW (680hp), 90-degree V6 – the internal-combustion engine part of the PEUGEOT HYBRID4 500KW powertrain – has been clocking up kilometres on the bench since April.

Meanwhile, the front-mounted 200kW motor-generator unit, seven-speed sequential gearbox and battery are in the process of being assembled in keeping with the bench-testing validation schedule. The powerful, technologically-sophisticated, high-voltage (900 volts), high-density battery is being codeveloped by PEUGEOT Sport and Saft, a subsidiary of TotalEnergies.

“Our target with regard to our energy requirements is flawless reliability and perfect control,” explains Jean-Marc FINOT. “Le Mans has become a 24-hour sprint race that can be won or lost by the number of times you pit. The exceptional energy-efficiency of the new Hypercars prefigures what we will see shortly in the world of road cars. This consideration had a fundamental influence on our work on the PEUGEOT 9X8 package, every aspect of which needs to contribute to achieving hyper efficiency, from its powertrain to its aerodynamics.” 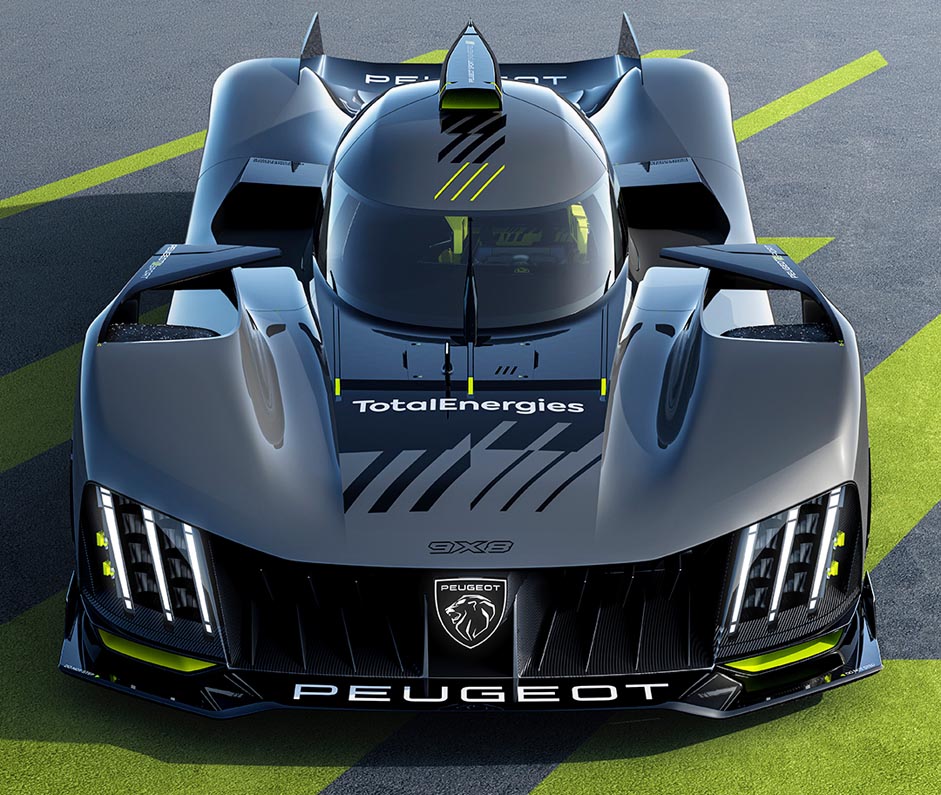 Le Mans, a laboratory for PEUGEOT
In addition to its aerodynamic, mechanical and electronic efficiency, the new car will serve to showcase PEUGEOT’s extensive engineering expertise in the uncompromising world of endurance racing. The Le Mans 24 Hours is a notoriously exacting event and the 5,400 kilometres the cars cover in the course of the race is close to the distance covered in a full season of Formula 1, so efficiency and reliability are both vital.

“There’s more to PEUGEOT’s involvement in endurance racing than the sporting aspect,” insists Linda JACKSON. “Endurance racing is a form of motorsport that provides us with an extreme laboratory, which explains why our association with Le Mans is so strong. More significant perhaps than the results we obtain on the race track are the opportunities it provides to prove our technology and the fruit of our research work in a race that throws extreme conditions at you for 24 hours. Le Mans gives us a competitive environment to validate the hybrid systems and technologies we are currently developing to reduce the fuel consumption – and therefore CO2 emissions – of our road cars. The teams at PEUGEOT Sport are proud when they see their research carried over to our production models. For our customers, Le Mans is a laboratory that testifies to the quality of our cars.”

In the drivers’ own words…
Paul DI RESTA – Scottish / 35 / former Formula 1 driver / 2010 DTM Champion:
“Everyone wondered what the Hypercars would look like and now they’re here. The 9X8’s aggressive, innovative stance and strong brand identity are a big surprise.”

Loïc DUVAL – French / 39 / 2013 Le Mans 24 Hours winner / 2013 World Endurance Champion:
“There are cars that you look at and say they’re nice from the three-quarters front view, say, or from the side, from the front or from the back. The 9X8 looks terrific from every angle!”

Mikkel JENSEN – Danish / 26 / endurance racing driver / 2019 ELMS LMP3 Champion:
“The 9X8’s lines are very different to those that have been unveiled or hinted at in recent months. It will be a historic moment if we succeed in winning with this car because nothing in this style has ever been attempted before.”

Kevin MAGNUSSEN – Danish / 28 / former Formula 1 driver / IMSA endurance racing driver:
“There’s been nothing like it before. It really looks like the future of racing. It’s the first time so much work has gone into a racing car’s actual design. The absence of a rear wing was as a huge surprise. It feels like the beginning of a new era.”

Gustavo MENEZES – American / 26 / World Endurance Championship driver / 2016 LMP2 Le Mans 24 Hours winner / 2016 LMP2 World Champion:
“The 9X8 signals the beginning of a new chapter in motor racing. These past 10 or so years have been marked by LMP1 prototypes. It was time to invent an iconic future with the 9X8.”

Jean-Eric VERGNE – French / 31 / former Formula 1 driver / two-time Formula E Champion:
“The PEUGEOT 9X8 is revolutionary. The teams responsible for its design have taken it in a direction that hasn’t been seen in motor racing for a long time. Magnificent!” 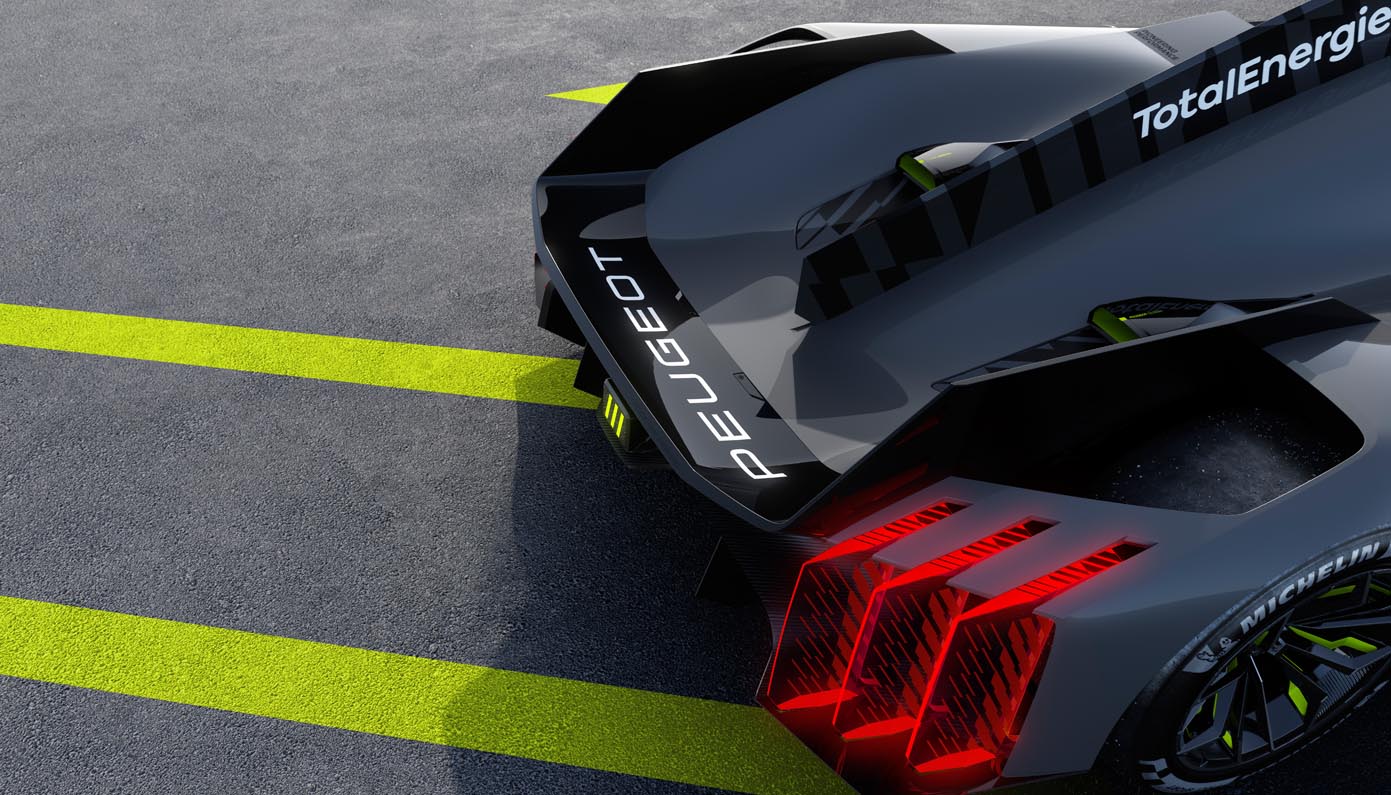 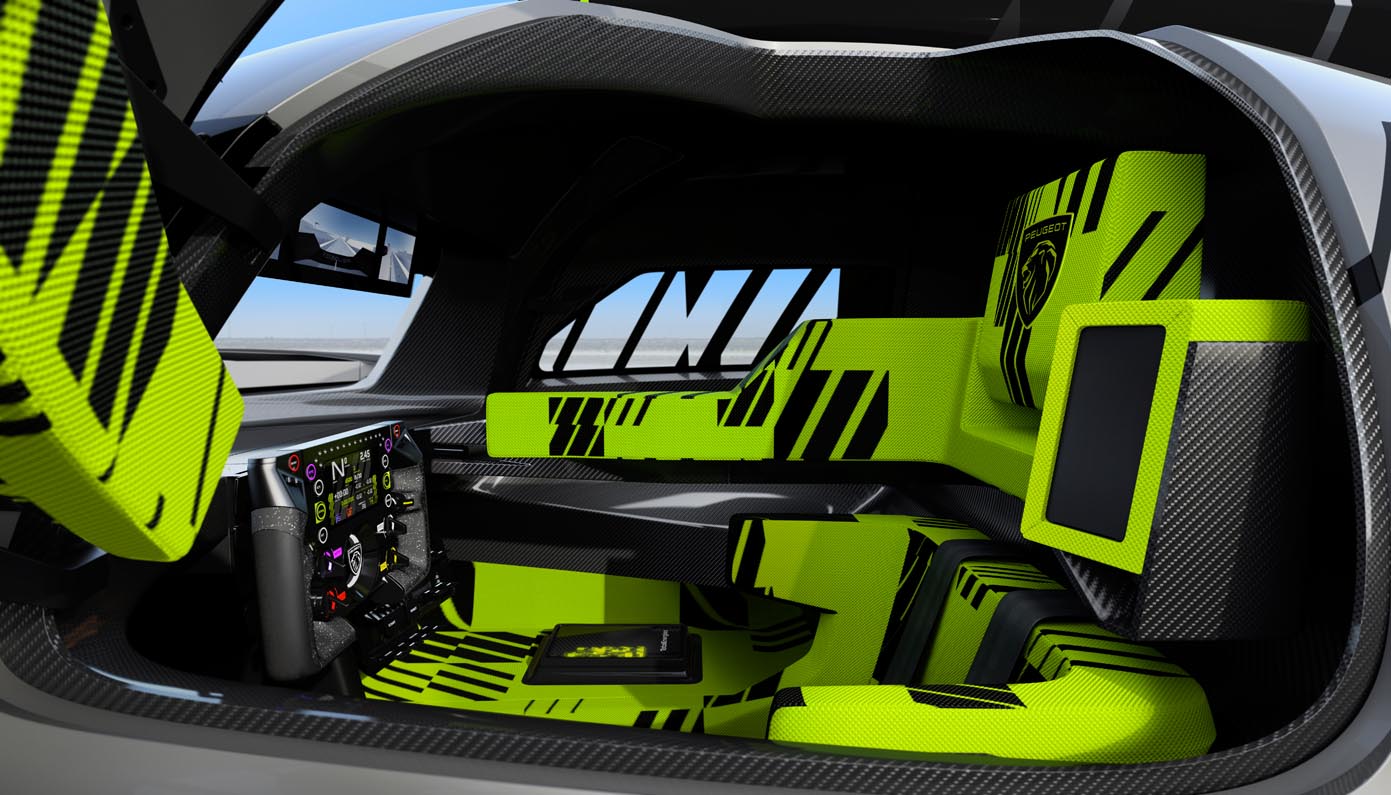 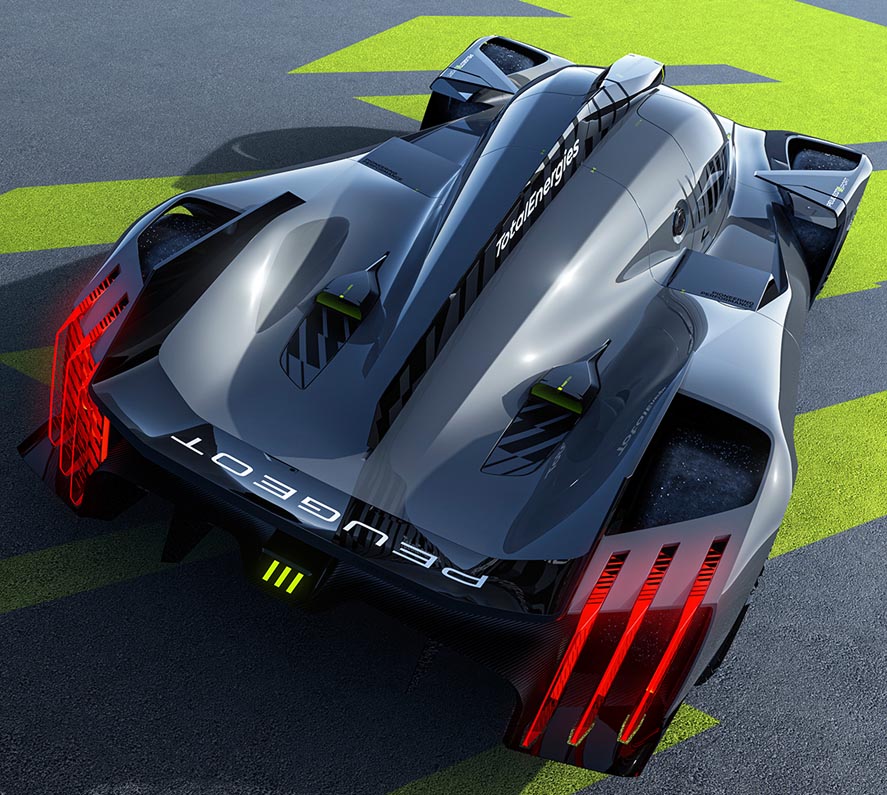 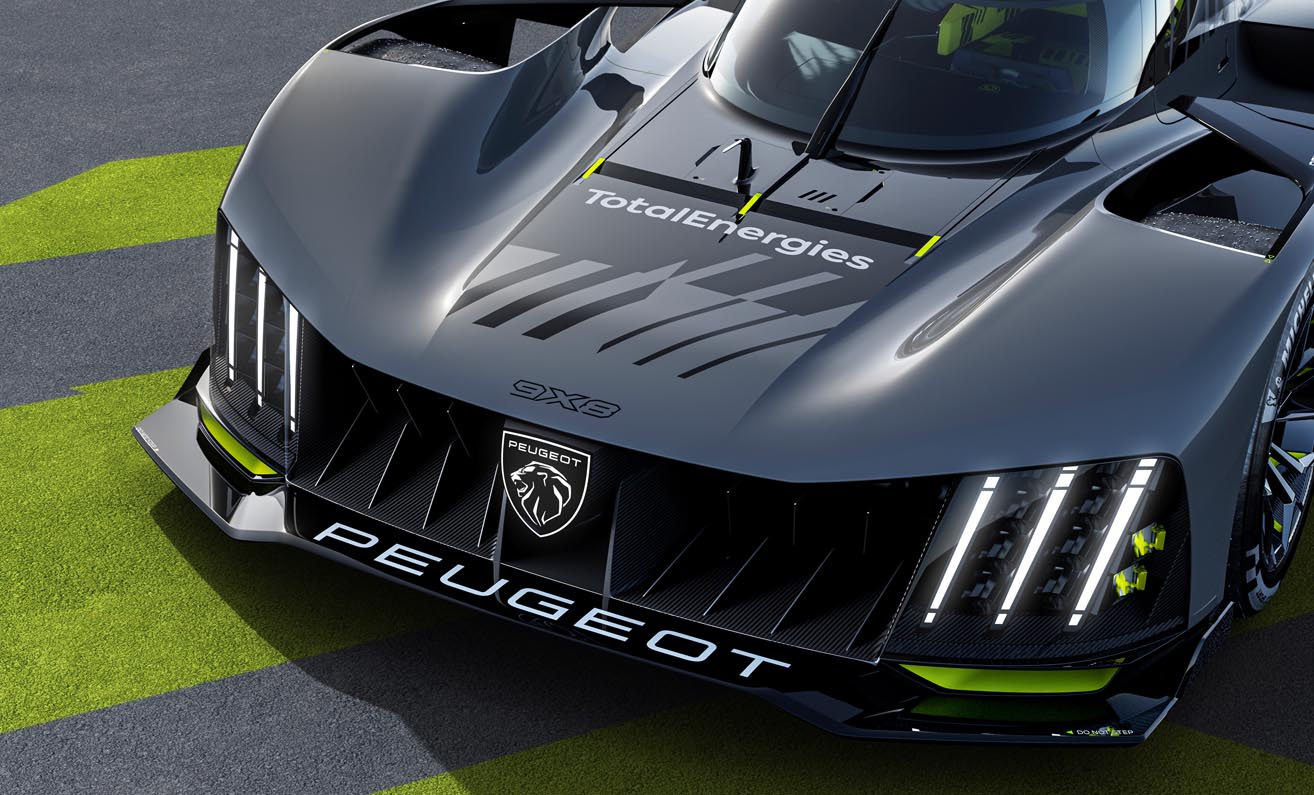 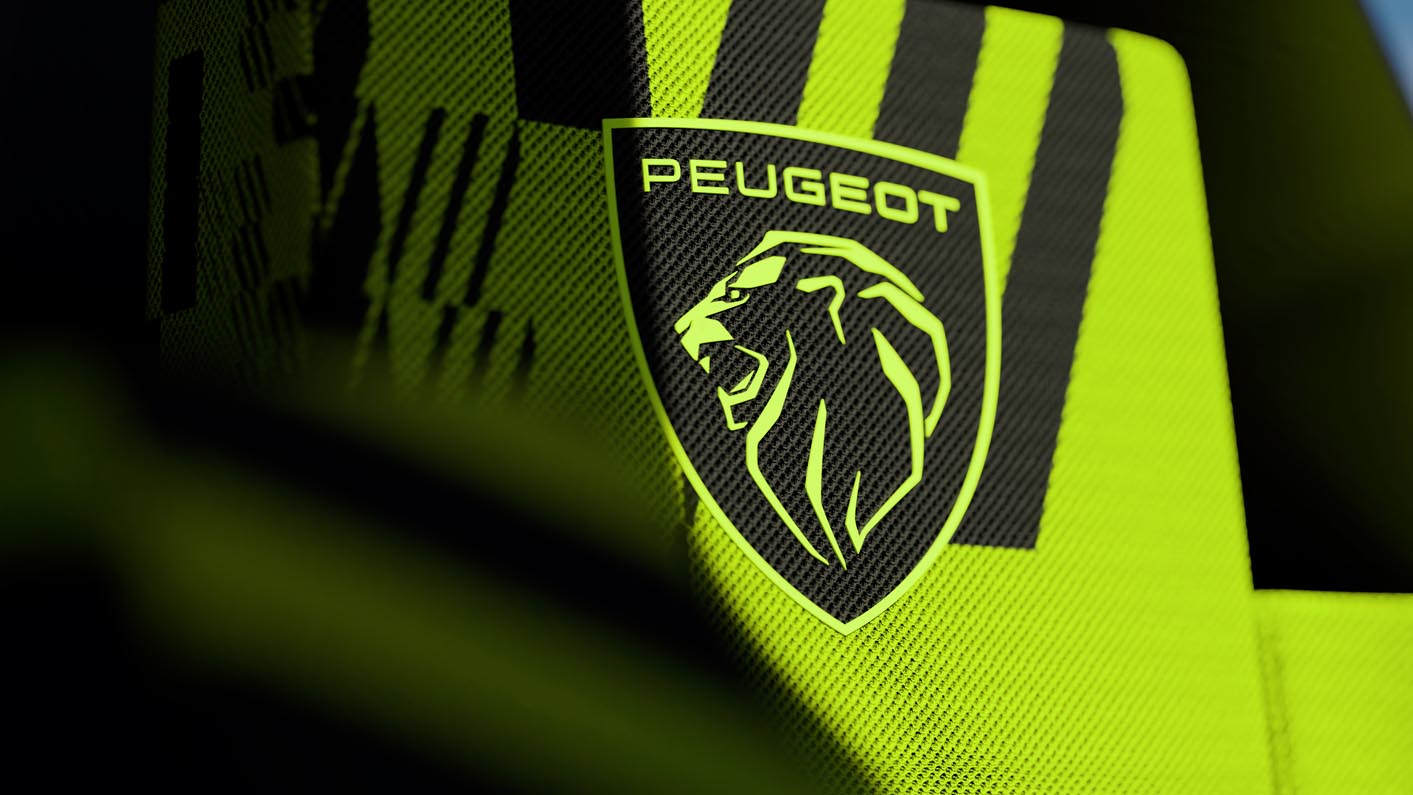 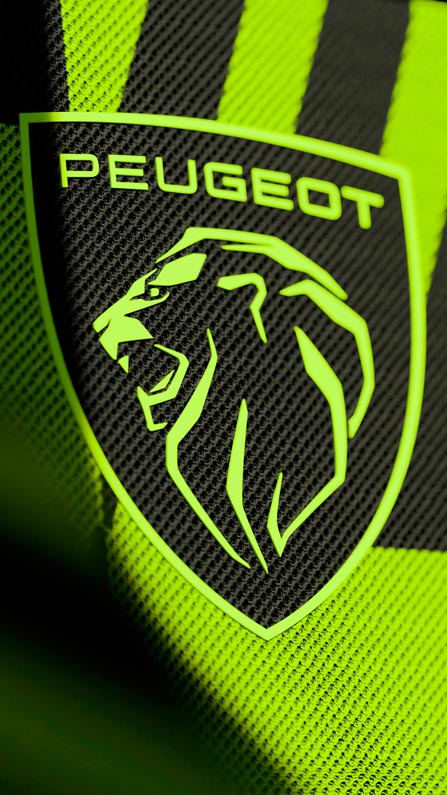 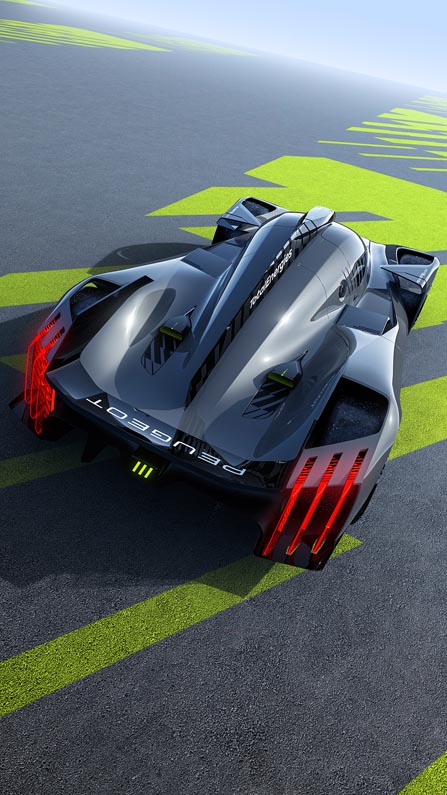 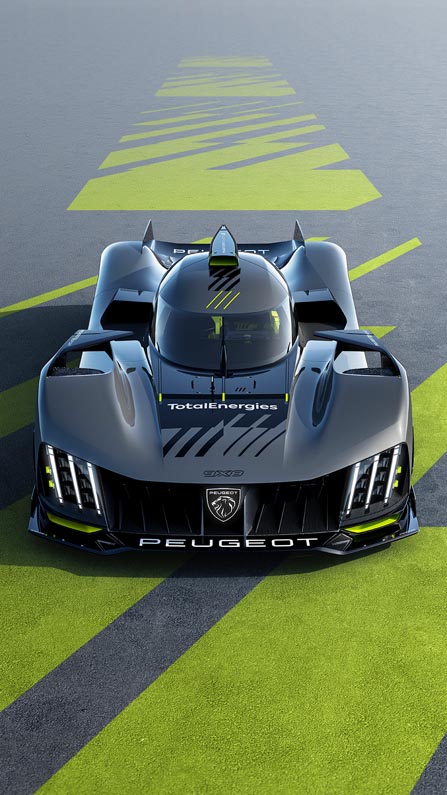 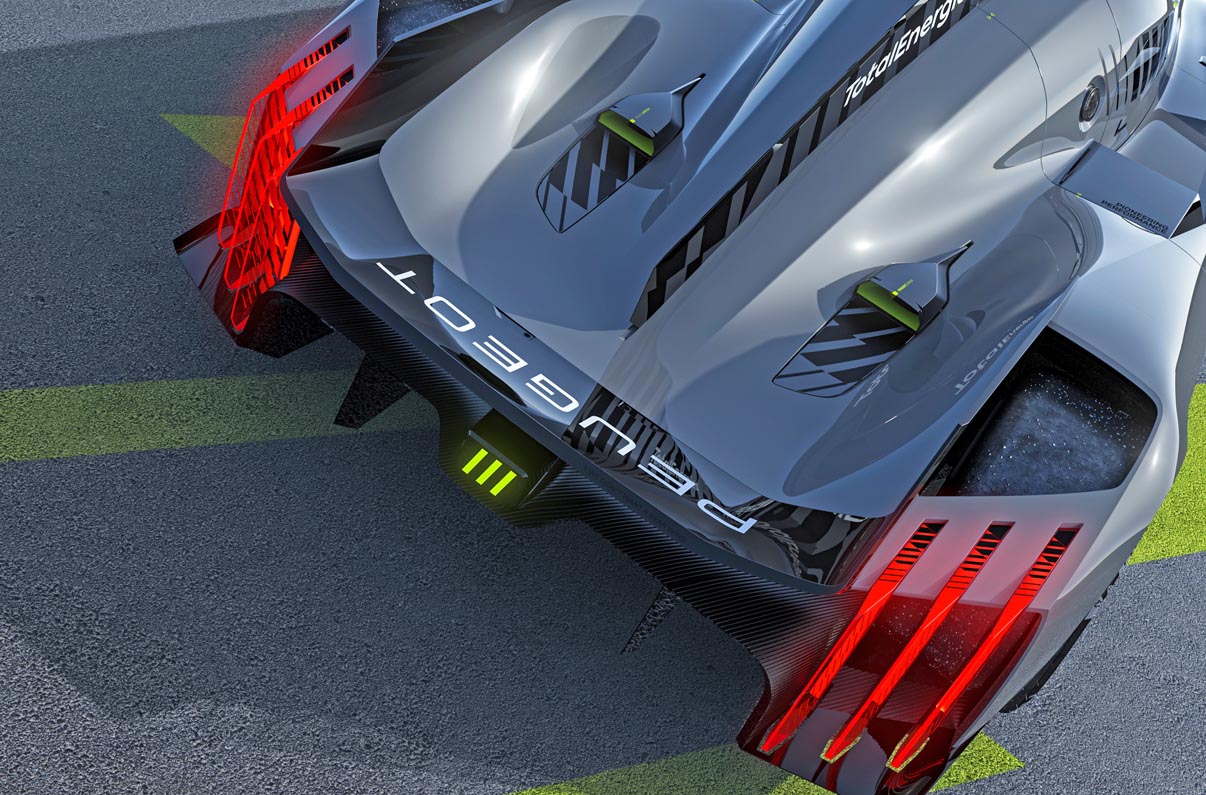 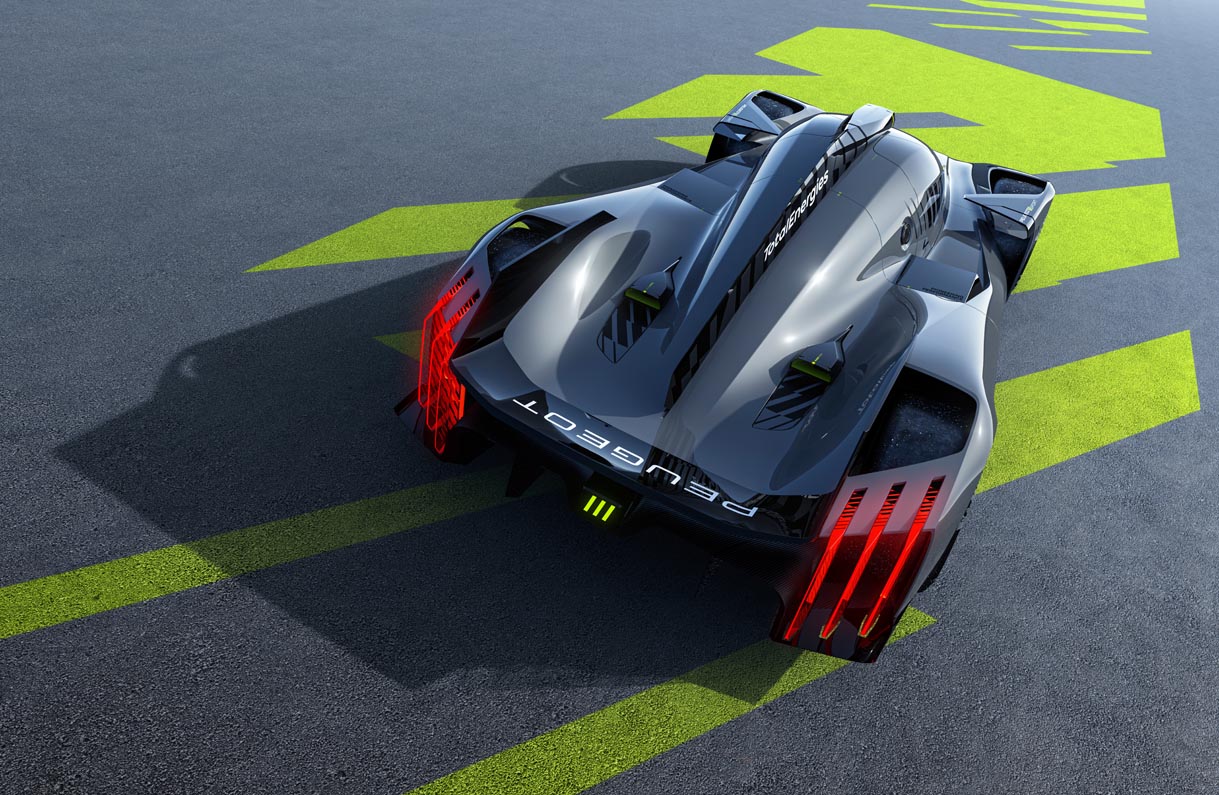