New Porsche Infotainment: Knows More, Does More And Is A Better Listener 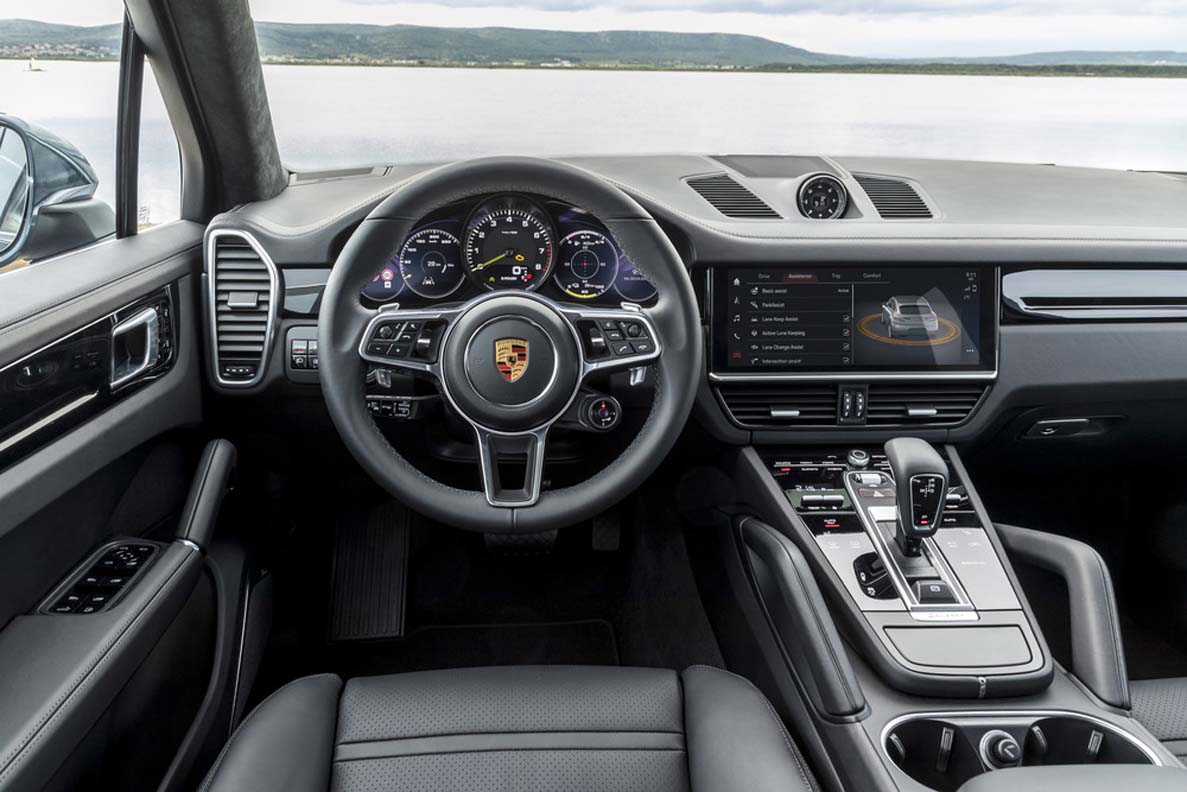 The sixth generation of Porsche Communication Management (PCM) launches in the Porsche 911, Cayenne, and Panamera models this summer. The most important innovations include integrations of Apple Music and Apple Podcasts built into the PCM, and wireless Apple CarPlay support. In addition, Android Auto is included for the first time, and the Voice Pilot voice assistant can now understand instructions in natural language.

The navigation system calculates faster and displays its information more clearly. PCM 6.0 also ensures that software updates will be possible using over-the-air technology – this means they can be carried out wirelessly. In the future, the PCM system could also become the digital basis for adaptive sound – music that dynamically adapts to the driving style.

Flexible now also in the use of Android Auto
The scope of delivery of the new PCM 6.0 includes the integration of Android Auto. In addition to Apple iPhones, smartphones with the Google Android operating system can also now be integrated into the infotainment systems of the Porsche models.

This happens automatically as soon as the mobile phone is connected to the vehicle via a USB cable, at which point phone functions and smartphone apps that do not impair driving safety can be operated via PCM 6.0.

Porsche seamlessly integrates Apple Music and Apple Podcasts
Porsche drivers with a subscription to Apple Music will have access to more than 75 million songs ad-free, thousands of editorially curated playlists, and daily selections from the world’s best music experts, including all of the artists and hosts broadcasting across its Apple Music 1, Apple Music Hits, and Apple Music Country global livestream radio stations, via a three-year free in-car internet connection from Porsche.

Porsche drivers also have access to millions of free shows from Apple Podcasts, the world’s leading podcast platform, to be informed, entertained, and inspired on every drive. Customers can link their Apple ID to their vehicle in the Porsche Connect app or online at My Porsche to get started.

“We have succeeded in combining the classic radio experience with the modern streaming experience,” says Martin Bayer, Manager Navigation and Infotainment at Porsche AG. It is not just about listening to audio content, but rather the in-depth integration of Apple Music and Apple Podcasts built into the Porsche infotainment system. With Apple Music built-in, the driver can add a song they hear on broadcast radio to their Apple Music library or, if the driver likes a particular artist on the radio, they can switch to a custom Apple Music station that will only play that artist’s music.”

Porsche vehicles equipped with the new PCM 6.0 also come with wireless Apple CarPlay support. Drivers can wirelessly connect their iPhone and get directions optimized for traffic, make calls, send and receive messages, and listen to music and podcasts simply by tapping the touchscreen display or using Siri voice control, all while staying focused on the road.

Voice Pilot is now more human
It is now possible to simply say “Hey Porsche” and the vehicle will carry out commands without the driver having to take their hands off the steering wheel or their eyes off the road. The sentence “I need petrol” results in the navigation system finding a route to the next filling station.

The phrase “I am cold” automatically increases the interior temperature. Massage seats and ambient lighting can also be controlled in a similar way. Voice Pilot is permanently online and continually learns new phrases: over time, the system will keep improving, providing more and more support to the driver.

The navigation system is now even more powerful
The new hardware and software architecture of PCM 6.0 allows even faster calculations by the navigation system – always taking into account real-time traffic information. The significantly reduced and more clearly designed map view is also a factor that contributes to the speed at which information is provided.

Using real-time traffic data, the roads are shown in different colours depending on the traffic situation. The route monitor allows quick access to all the relevant information, and traffic jams and waypoints along the route are clearly shown. The Porsche navigation system also shows traffic information for individual lanes.

More communication between human and machine
With PCM 6.0, Porsche brings the digital functions of the Taycan electric sports car to combustion engine models for the first time. The interactive ‘Good to know’ operating manual is integrated into the system, smartphone calendar entries are displayed on the PCM 6.0 touchscreen via the Porsche Connect app, and, if there is an active Bluetooth connection between the car and the smartphone, Porsche drivers can also dial into conference calls using the calendar service. Software updates for the infotainment system are also available via over-the-air technology.

Porsche will compose the music of the future
Dynamic driving could also soon be accompanied by matching music. The new Soundtrack My Life app from Porsche Digital, which is currently still at the beta version stage, will launch with the world’s first adaptive sound function. The app does not just compile a playlist, but creates a personal soundtrack in real-time. This consists of specially composed music elements and is truly adaptive because it changes based on driving style.

In the case of a spirited drive on country roads, the music played will be different to that chosen for a more steady cruise to the office. If this calls to mind the background music of computer games, where the soundtrack changes depending on the situation, that is not far wrong. However, the soundtracks can also be enjoyed outside the car via the smartphone. 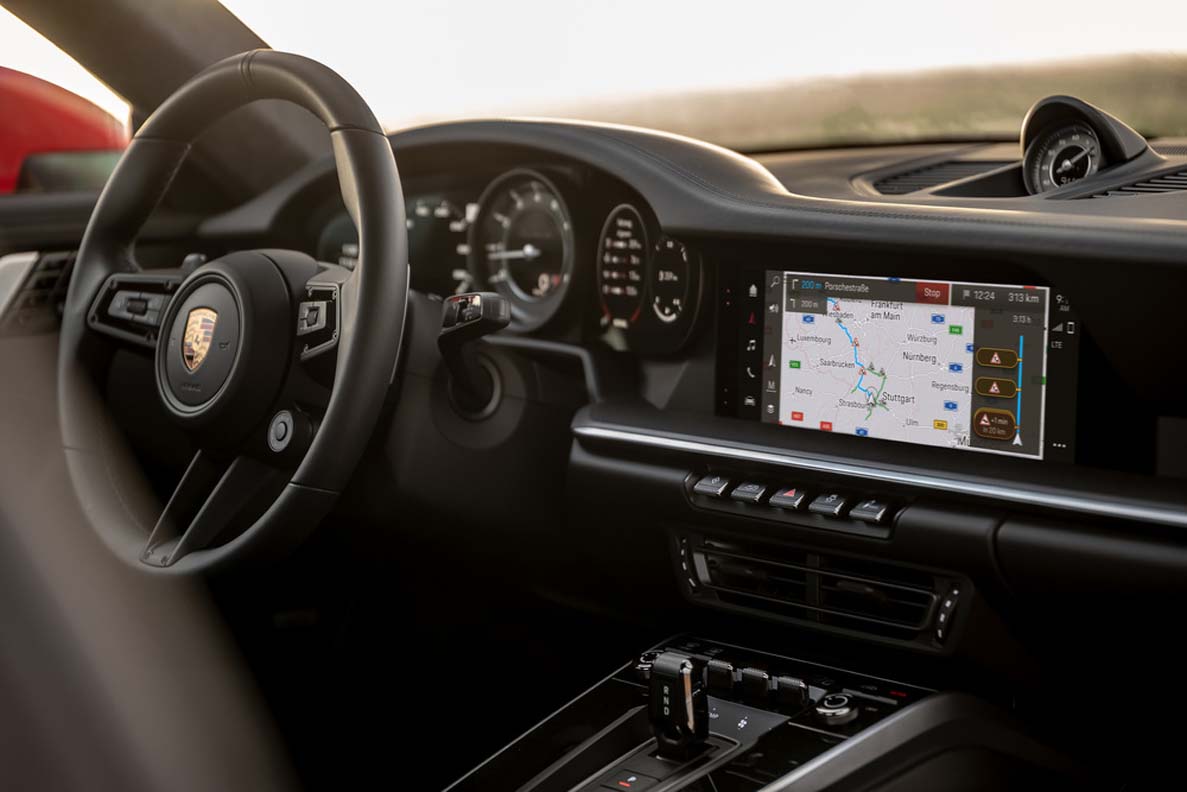 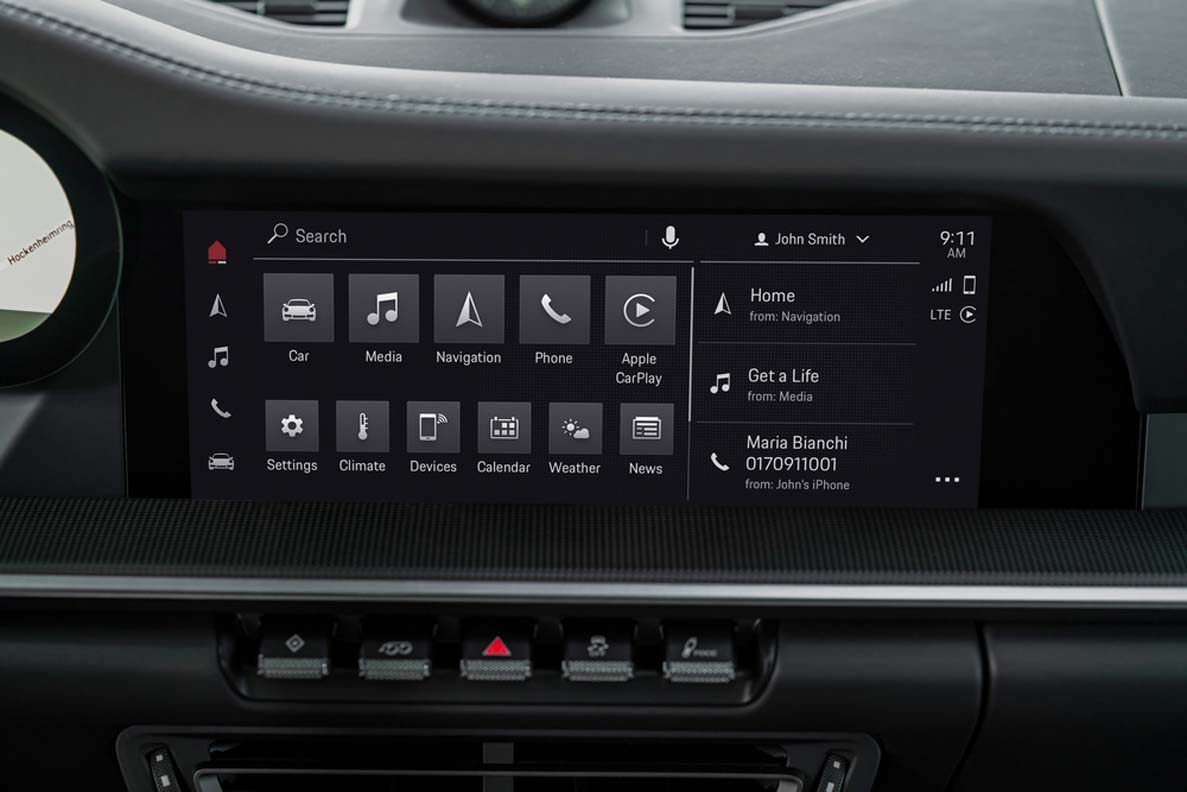 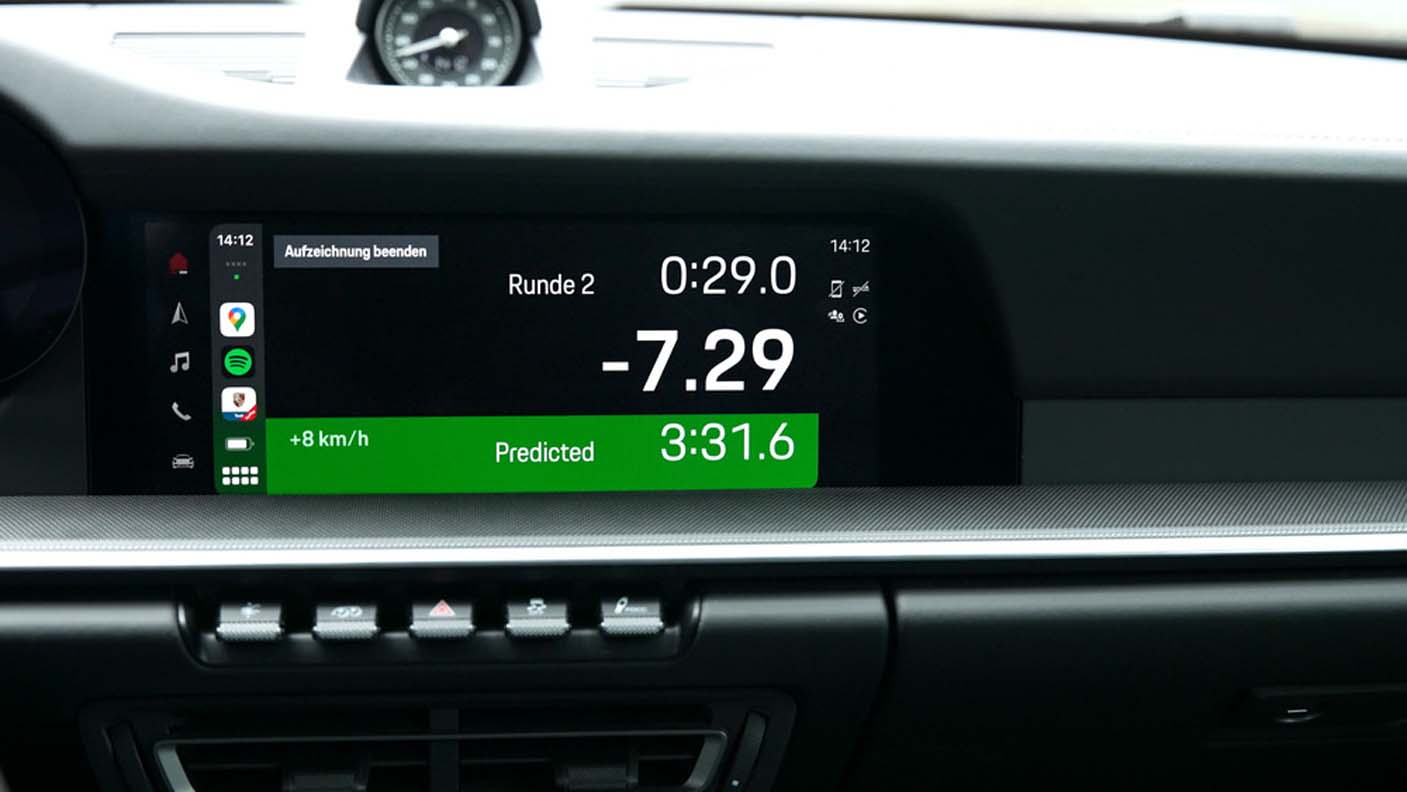 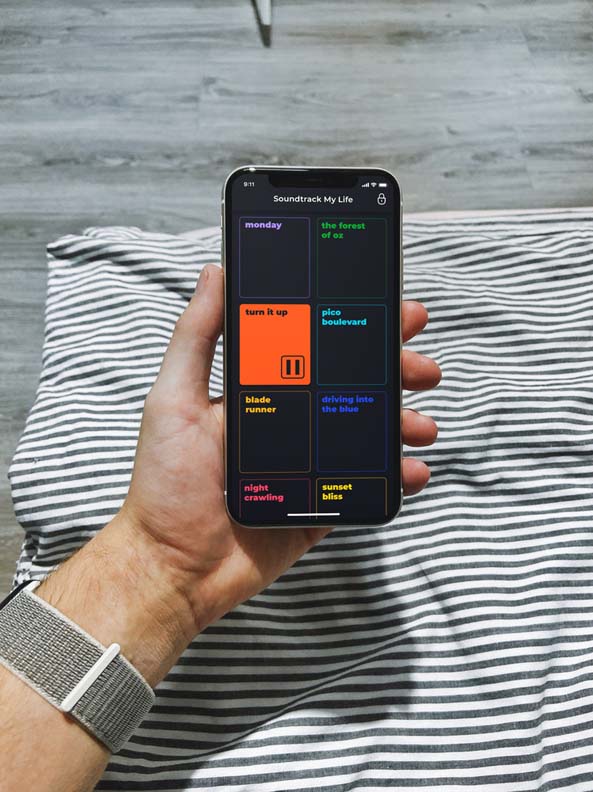 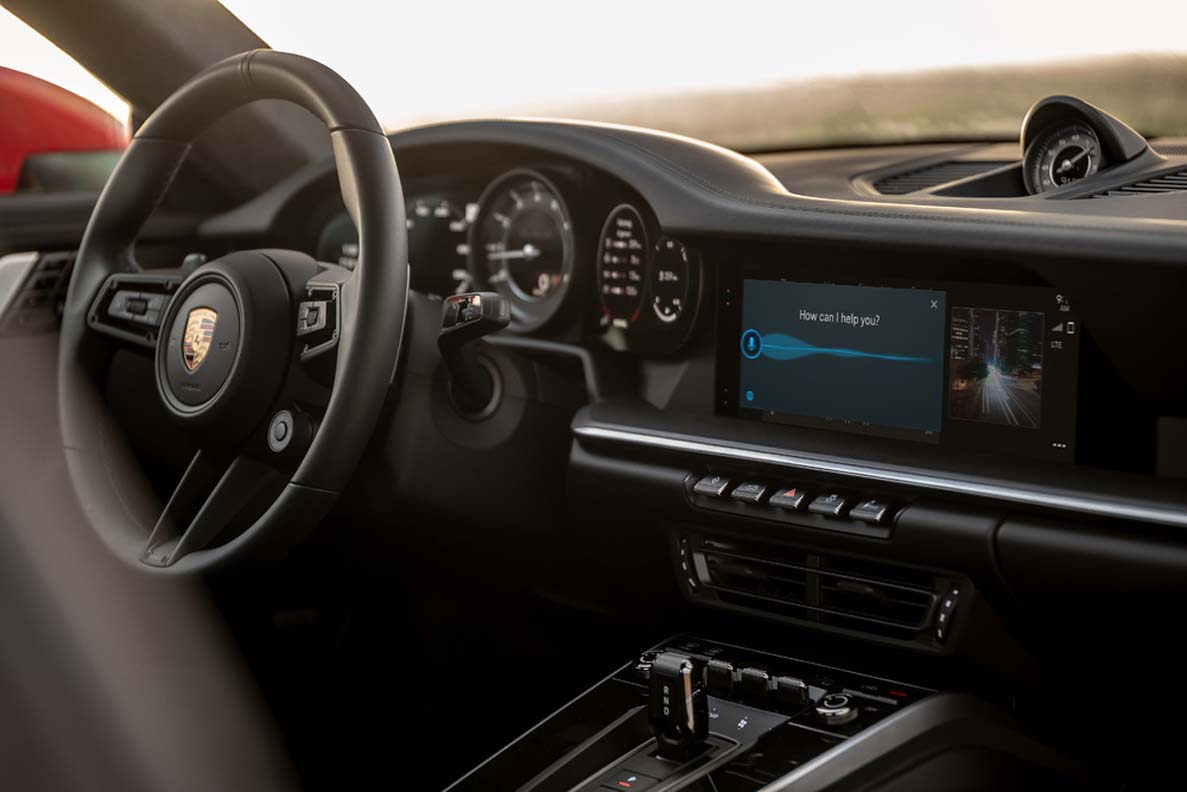