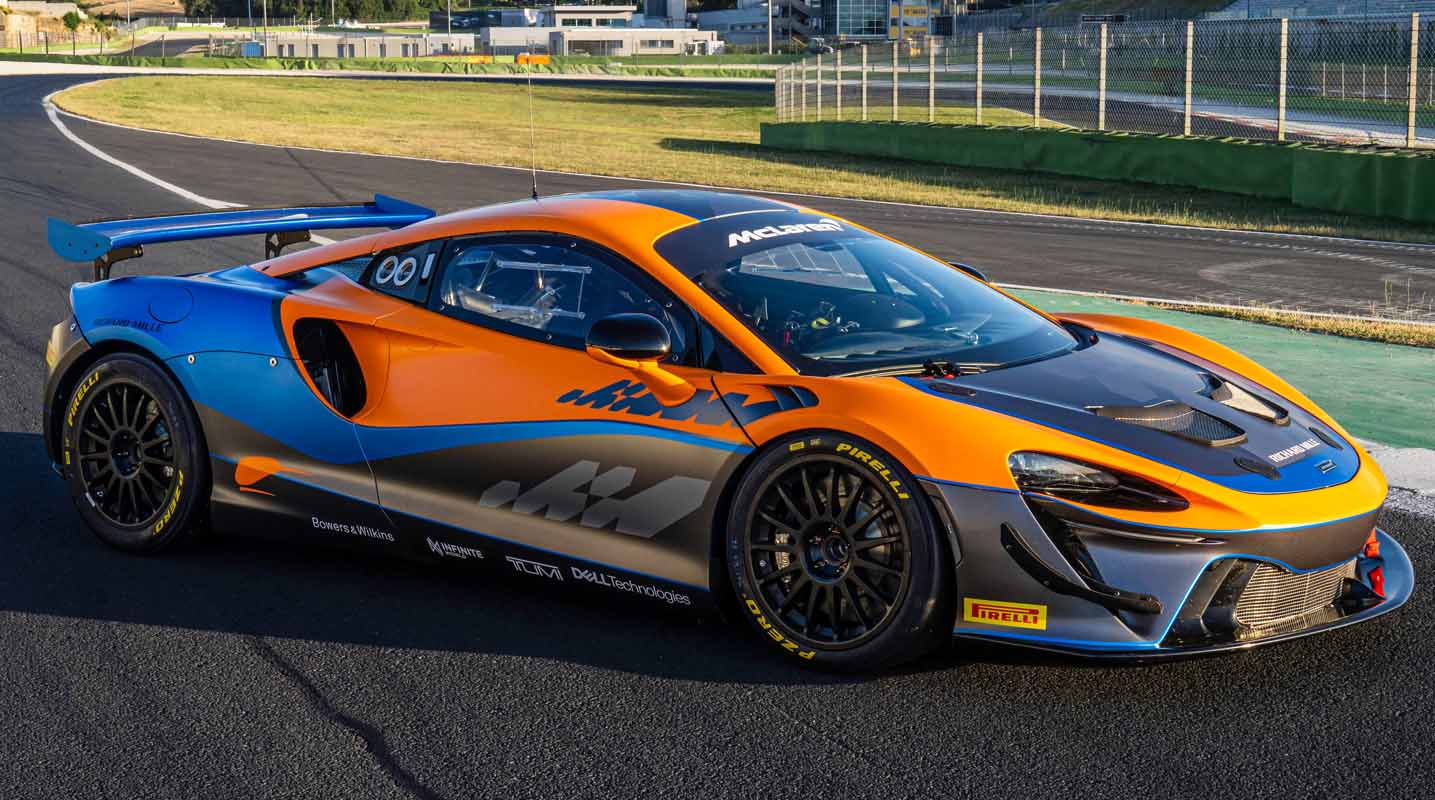 McLaren Motorsport revealed the new Artura GT4 race car, ahead of its global public debut at the 2022 Goodwood Festival of Speed, Sussex, England. Based on the all-new McLaren Artura luxury supercar, the Artura GT4 builds on the huge successes of the multi-championship-winning 570S GT4 and 720S GT3 competition cars.

The new Artura GT4 shares much of its technology with the all-new McLaren Artura road car, which debuts the McLaren Carbon Lightweight Architecture featuring a carbon fibre monocoque at its core. This motorsport-inspired chassis design and construction is the ideal platform for a race car, as a rigid structure enables a wider setup envelope for the driver as well as providing a strong and extremely safe driving environment.

The minimisation of weight is a key element of the Artura road car, and this philosophy continues in the race car – with a compact V6 engine and ancillaries including the exhaust system all weight-optimised, the new GT4 car is more than 100Kg lighter than the outgoing 570S GT4.

The Artura road car has a hybrid powertrain with an all-new, compact twin-turbo 120-degree V6 petrol engine, allied to an Axial Flux E-Motor located in the transmission. The V6 engine alone generates more than enough output for the tightly-controlled GT4 racing requirements, where regulations do not permit hybrid powertrains. The lack of hybrid components delivers a weight-saving of 130kg on an already super-lightweight car, while the space within the carbon monocoque for the hybrid battery of the road car now houses the fuel cell and ancillary drive system, keeping weight central and low down.

The new V6 engine features fast-responding twin turbochargers situated within the engine vee and the unit has been designed to offer improved throttle response and fuel economy compared to the older M838 V8 used in the 570S GT4, even without electrification. Considerably lighter and smaller than the older unit, the new V6 engine further improves power-to-weight, lowers the car’s centre of gravity and benefits weight distribution.

The V6 engine is controlled by a Bosch Motorsport ECU to fine-tune Balance of Performance management, essential for competing in the GT4 category. The Artura GT4 also features a modular motorsport wiring harness for serviceability, reducing repair times and costs. This interfaces with a motorsport electrical system for enhanced versatility, with the benefit of more robust and variable control systems.

Power is delivered through a seven-speed gearbox with an improved set of ratios optimised for performance and the transmission system has onboard diagnostic software. The unit is not the same as the Artura road car’s eight-speed seamless shift gearbox as this employs the E-motor for reversing; GT4 regulations demand that the car must have a reverse gear. 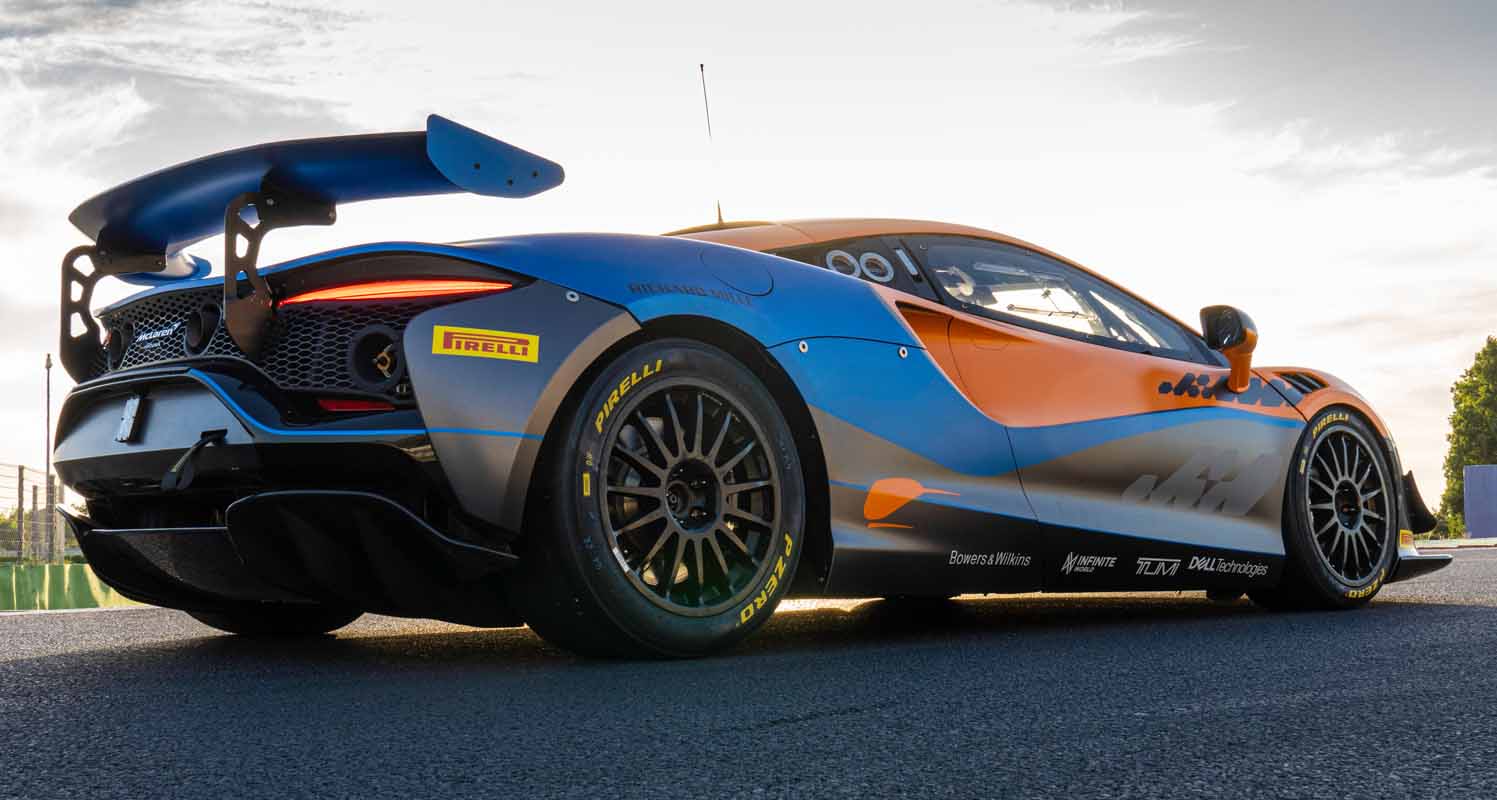 The Artura road car carries the McLaren design principles of ‘everything for a reason’ and accordingly has high aerodynamic efficiency. The GT4 iteration extends this further with an aerodynamic package that offers greater downforce than the outgoing 570S GT4 particularly at the front end, which features a bespoke splitter, dive planes and bespoke bonnet duct. At the rear a high efficiency wing incorporates seven angle settings to cover a wide spectrum of circuit types.

Track excellence is an important part of the GT4 equation, but the McLaren Artura GT4 is designed to race in a category governed by Balance of Performance technical regulations that are intended to equalise a wide range of supercars and GTs with differing chassis layouts, power outputs and weights. Much attention, therefore, has been paid to the accessibility and safety of the Artura GT4 to both drivers and race teams.

Drivers of McLaren Automotive road and race cars have always enjoyed excellent visibility for both placing the car on track and in the intensity of wheel-to-wheel racing and the Artura GT4 further improves upon the 570S GT4 in this regard. Ingress and egress is also better, important for swift driver changes mid-race. Safety levels are on a par with the 720S GT3, including the fixed FIA 8862 spec driver’s seat with adjustable pedals for reach and the steering wheel is also inspired by the GT3 car with illuminated buttons for competition in all conditions at both day and night. The cockpit also features a new Bosch DDU instrument display, with enhanced graphics.

Suspension and handling is enhanced over the 570S GT4 with the front wheel width increased for more grip and less tyre degradation with development carried out in conjunction with tyre partner Pirelli. At the rear a mechanical Limited Slip Differential offers increased grip and performance with the benefit of improved rear brake wear, performance and reduced fuel consumption over the 570S GT4’s Electronic Stability Program system. Damping has also been improved, as has brake cooling efficiency. Driver aids include motorsport-specific Anti-lock Braking and Traction Control systems with adjustment for different grip conditions.

The McLaren Artura GT4 has also been built with bespoke motorsport-specific components to enhance performance, durability and serviceability for the extreme conditions of racing at the most demanding circuits. All of these components have been subjected to rigorous assessment to ensure that they have an increased lifing schedule.

Serviceability improvements include a removeable bonnet for ease of access and a 110-litre fuel cell with two motorsport lift pumps and a main pump for increased reliability and performance. The rear wing is mounted to the chassis using a new ‘G-Pylon’ design that means the rear bodywork can be removed without having to dismantle the wing. In the interests of robustness in the heat of battle, the Low Temperature Radiators have been moved inboard while the high-level exhaust system is now solely mounted to the powertrain; sound volume is recorded at 105dB static.

Purchasers of the Artura GT4 will also be able to order from a comprehensive list of options to support a range of competition and track environments. These include the fitting of a passenger seat and harness. Both seats can be specified in a variety of sizes.

“The Artura GT4 is the second race car to be built from the ground-up by McLaren Automotive’s Motorsport division. Based on the revolutionary new McLaren Artura, it represents a significant step up from the outgoing 570S GT4, itself a hugely successful competition car which has achieved many race and championship wins with our customer racing teams. With lighter weight, extremely precise handling characteristics and enhanced durability – as well as the packaging and efficiency advantages and all-round serviceability for mechanics of the new V6 powertrain – the Artura GT4 will set new class standards, as we are already seeing from our extensive test and development programme.” Ian Morgan, Director of Motorsport, McLaren Automotive 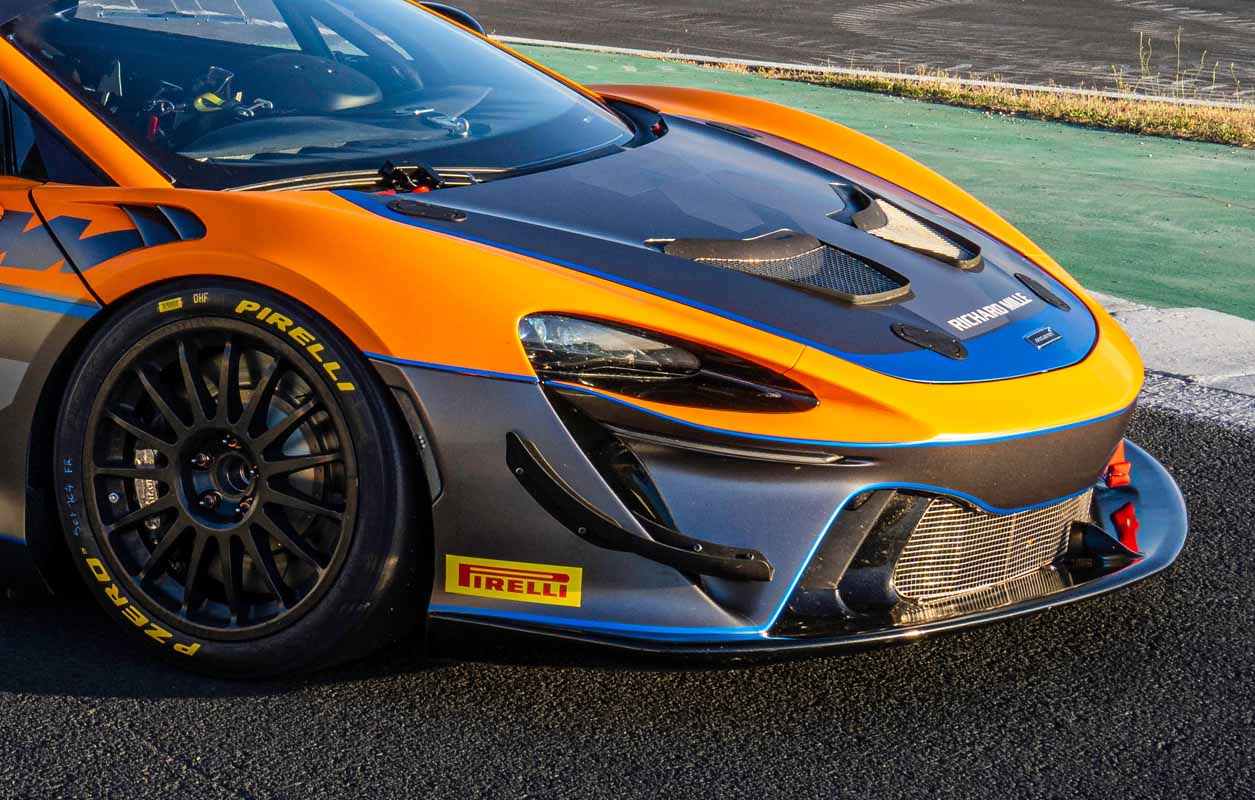 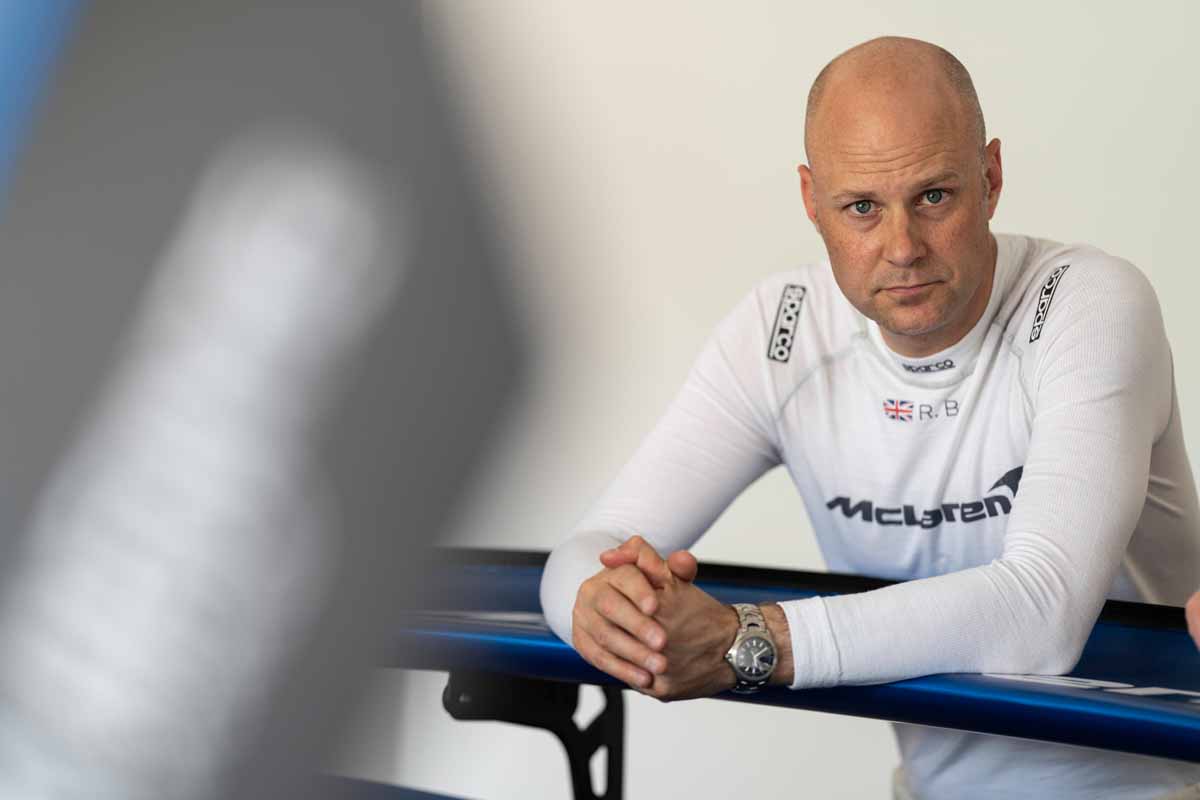 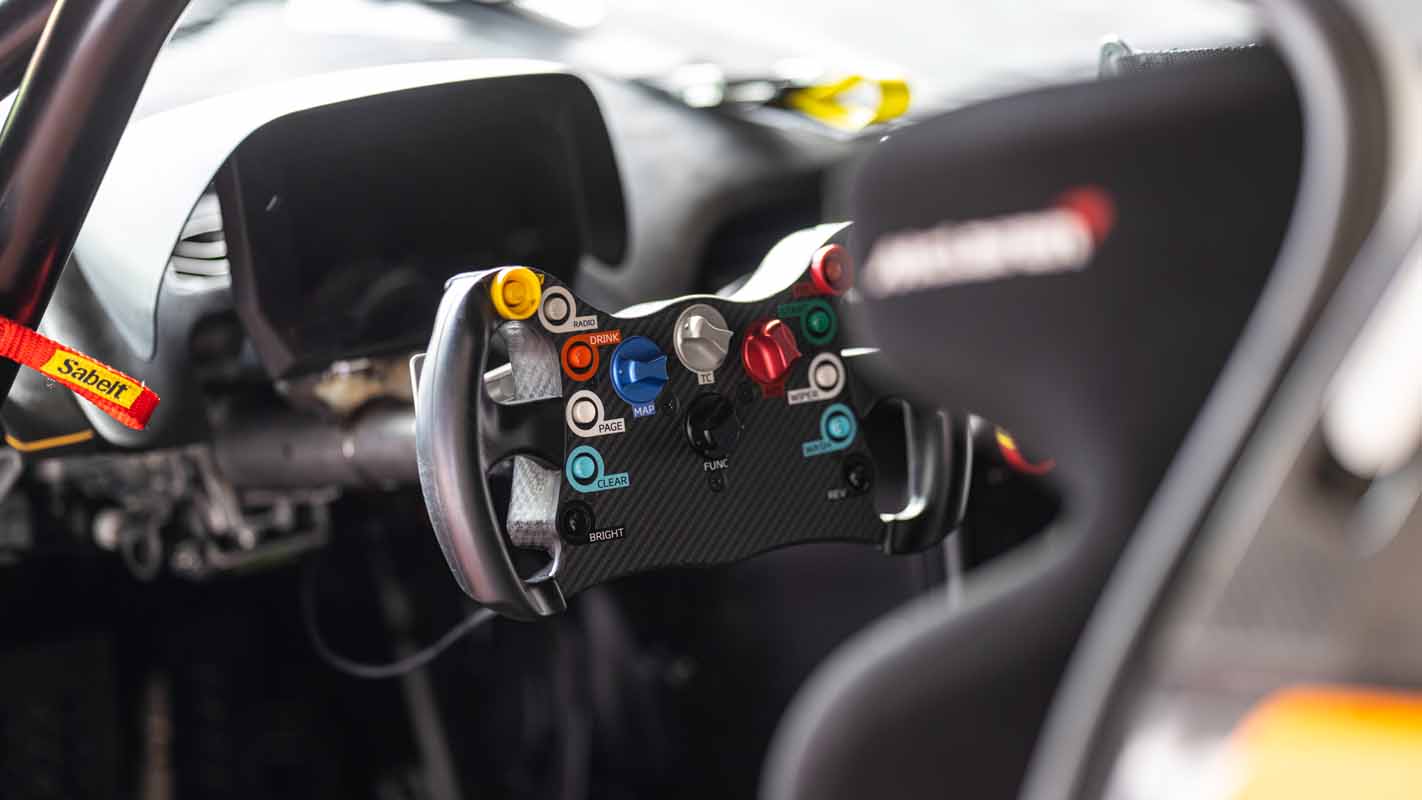 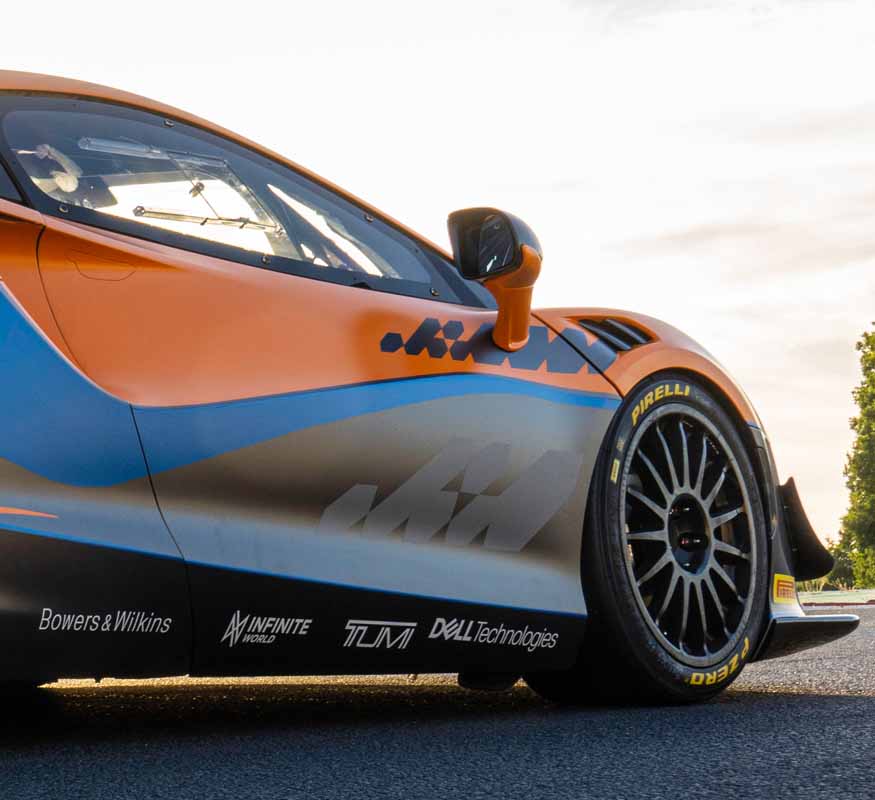 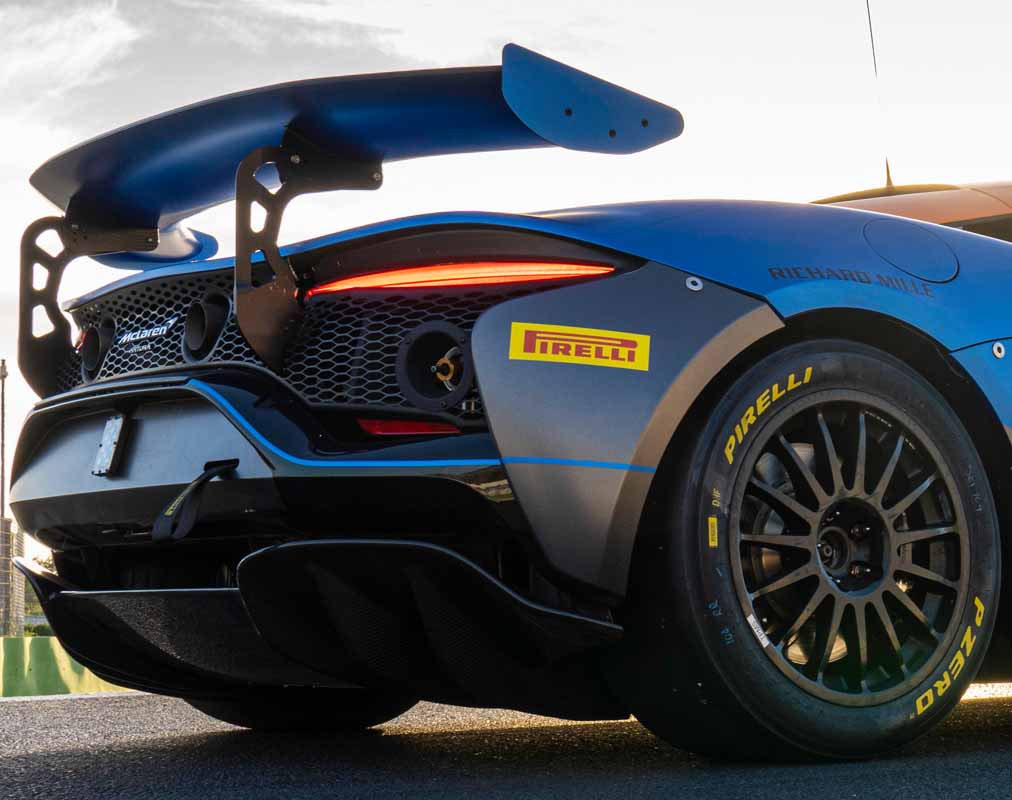 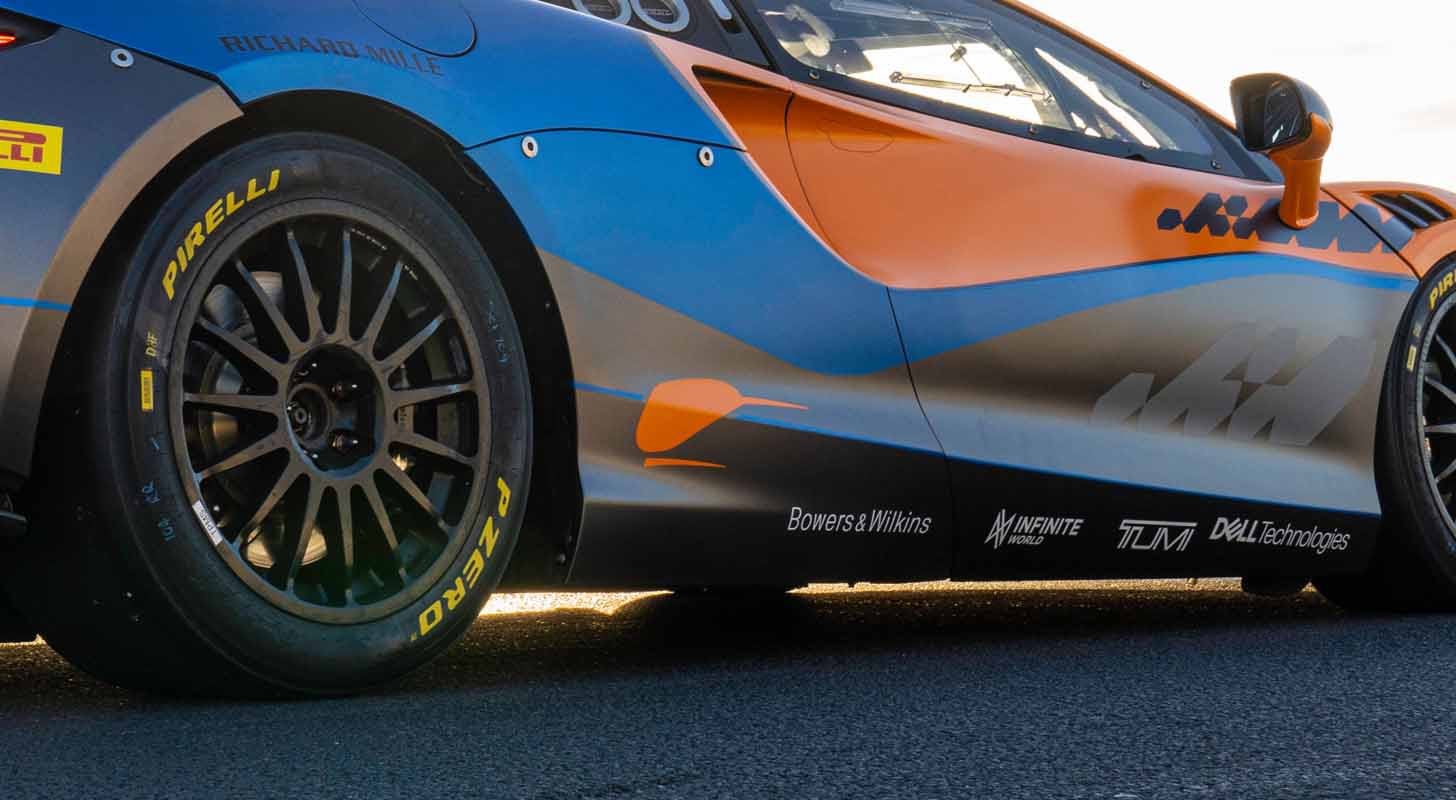 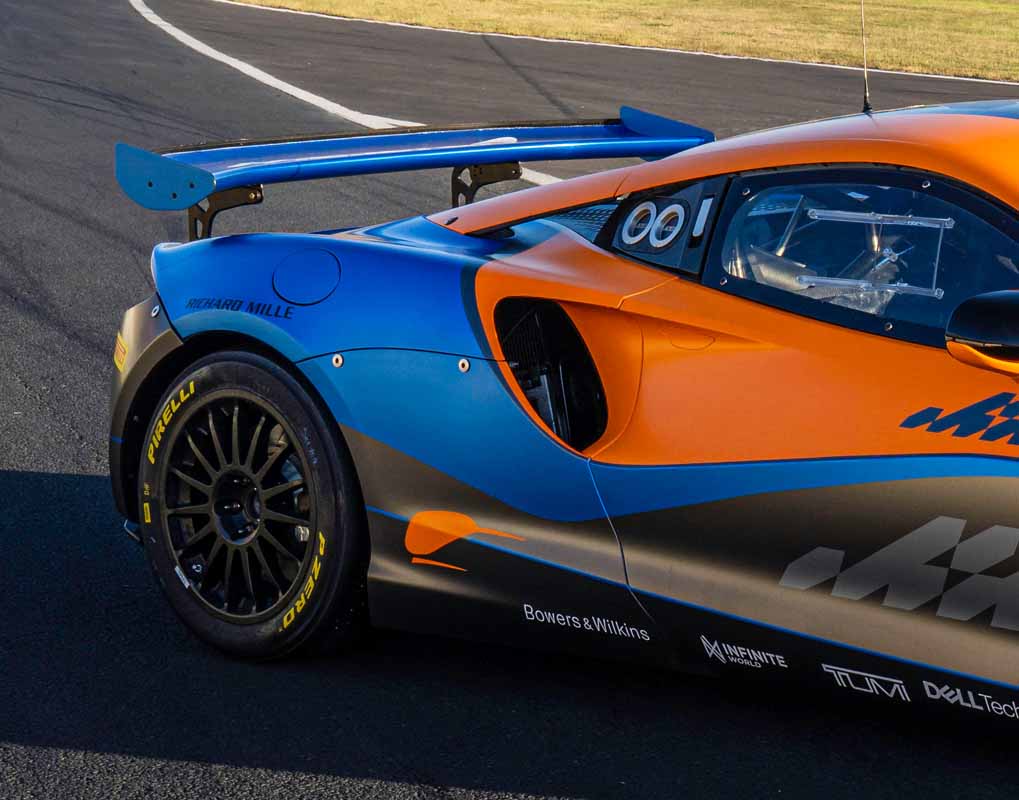 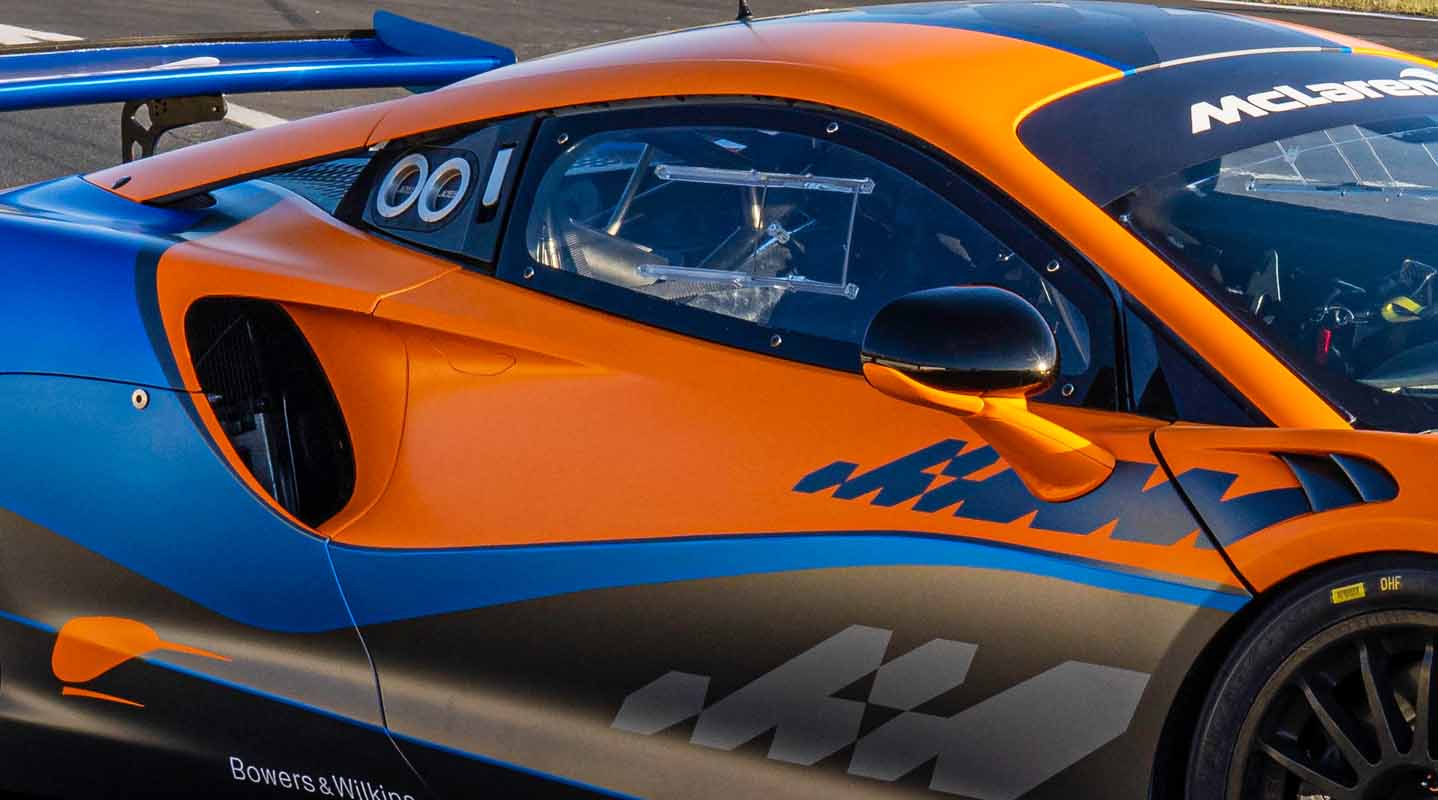 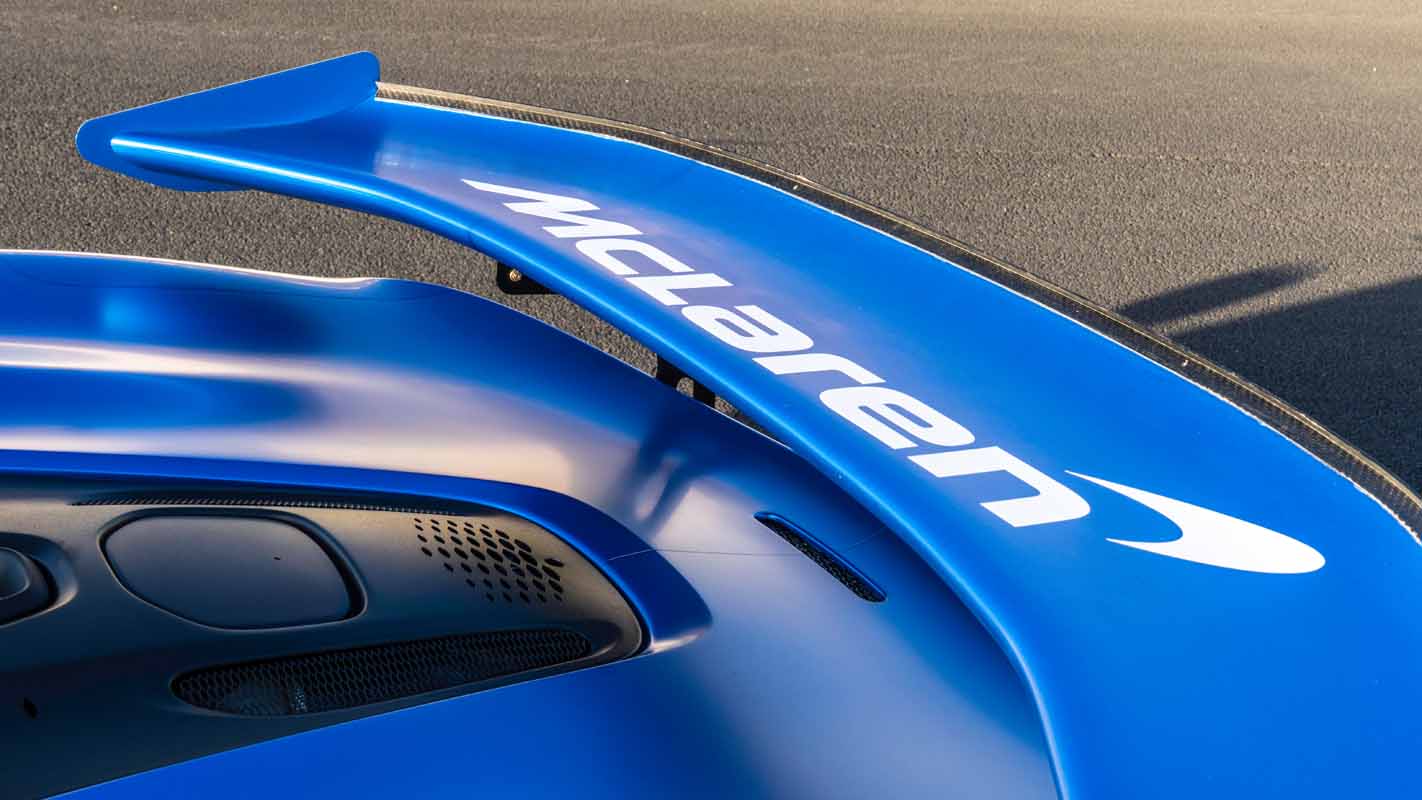 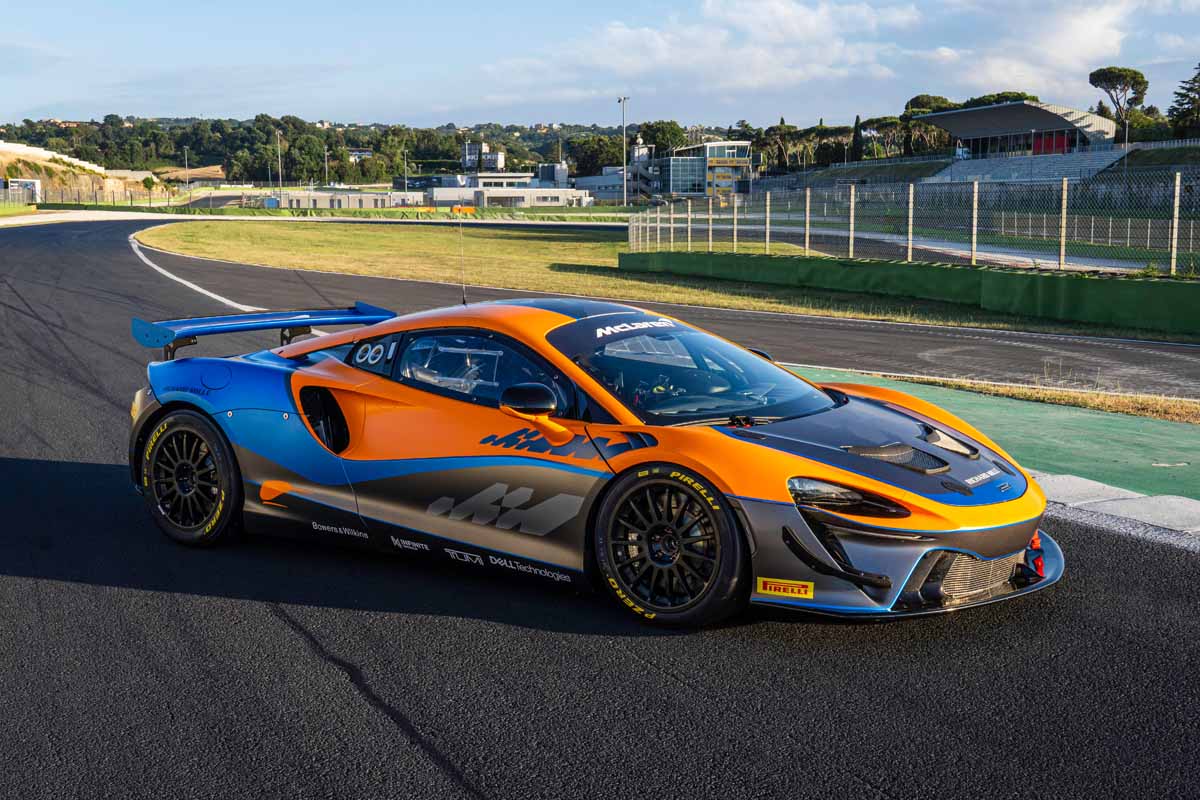