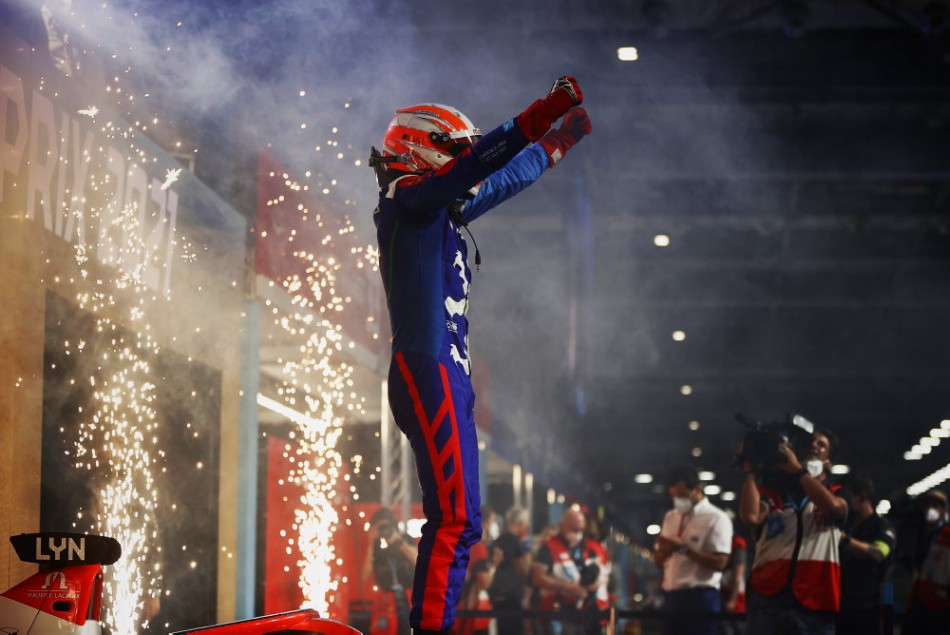 Alex Lynn was disappointed to finish third in yesterday’s London E-Prix after starting from pole position; just under 24 hours later, the Mahindra Racing ace made amends in fine style, racing from third on the grid to his maiden ABB FIA Formula E World Championship victory on home soil.

As pole-sitter Stoffel Vandoorne (Mercedes-EQ) led away in the early stages, Lynn initially conceded a place to the Belgian’s team-mate Nyck de Vries – the Dutchman damaging his steering in the process.

Undeterred, Lynn subsequently reclaimed the spot with the dual benefit of FANBOOST and ATTACK MODE, going on to seal his first win in his 40th start in the all-electric single-seater series. In so doing, he completed a popular British double, following countryman Jake Dennis’ triumph for BMW i Andretti Motorsport yesterday around the ExCel circuit in the heart of London’s historical docklands district.

Right from the outset, this was a race that had a bit of everything. Up until mid-distance, Vandoorne looked odds-on to secure his second victory of the 2020/21 season as he established a small gap over the chasing pack and mastered a brace of safety car interventions, but a lock-up from Oliver Rowland at the hairpin resulted in contact that put both cars in the barriers, incurring the Nissan e.dams driver a five-second penalty.

That drama promoted de Vries to a net lead, pursued by Lynn – net, because Lucas Di Grassi (Audi Sport ABT Schaeffler) had driven through the pit-lane during the second safety car period to controversially vault to the front of the field.

Whilst the Brazilian would go on to take the chequered flag first, he was disqualified for having not brought his car to a complete standstill on his passage through the pits and then failing to serve a drive-through penalty handed down for the indiscretion.

The duel for honours, therefore, was between de Vries and Lynn, with the Mahindra man taking advantage of a later second ATTACK MODE to steal the initiative. Di Grassi’s post-race penalty left Lynn celebrating his breakthrough series success, whilst the runner-up spoils were sufficient to vault de Vries into a six-point championship lead with just two rounds of the season left to run.

Behind the top two, Mitch Evans produced an inch-perfect defence to tally his fourth third-place finish of the campaign, artfully fending off first Maximilian Günther (BMW i Andretti Motorsport) and then Envision Virgin Racing rival Robin Frijns to reach the bottom step of the rostrum for Jaguar Racing, despite nursing some damage and losing time when he missed the activation zone for his second ATTACK MODE and had to try again the following lap.

Frijns took fourth to keep the pressure on in the title fight, impressively battling past Günther with a bold round-the-outside move. TAG Heuer Porsche’s Pascal Wehrlein would similarly demote his compatriot before the flag fell as the pair wound up respectively fifth and sixth, while Envision Virgin Racing rookie Nick Cassidy continued his recent strong run in seventh from all the way down in 18th on the grid.

António Félix da Costa was also in the wars, the defending champion displaying fast and feisty form as he hauled himself almost into the points-paying positions from the penultimate row of the grid, until contact with André Lotterer’s TAG Heuer Porsche sent him crashing out of contention and earned the German a drive-through penalty.

In much the same fashion, Sam Bird – championship leader entering the E-Prix – was on the cusp of the top ten from a lowly 21st starting slot when a coming-together with ROKiT Venturi Racing’s Norman Nato in the closing moments propelled both drivers into the wall, dropping the Briton to equal-third in the overall table alongside Dennis, some 14 points adrift of de Vries.

The season will conclude in the German capital of Berlin on 14/15 August, where at the end of a truly thrilling and unpredictable title scrap, the seventh Formula E champion – and the series’ first world champion – will finally be crowned.

“It’s hard for words to be honest. It’s as special as it gets. I’ve never felt something like this. Formula E has been a difficult one for me so to win is very special. I’ve got a huge crew behind me that I have to thank. I get the pleasure of driving around their hard work, and I can tell you there isn’t a group of guys and girls that stay longer and wake up earlier than them. I honestly can’t believe this has happened. It’s incredible.”

“I have to admit I’m a bit disappointed with P2. First of all, I feel sorry for my team mate (Stoffel Vandoorne), he deserved the win today if it wasn’t for Oliver Rowland taking him out. We were a bit unlucky with the safety car when we just activated the attack mode, that made me a little bit vulnerable after the re-start. And then Lucas Di Grassi was there which I was surprised to see because he shouldn’t have been there. At the end, the energy targets were so high, so I wasn’t able to get alongside him. I made quite a lot of mistakes trying to push but the targets were too high to ever be in a position to make a move.”

“A bit of an unexpected podium for me. At parts I actually thought I was out the race. I didn’t have a clean first few laps, and after the Rowland and Vandoorne incident I made a mistake, Günther got me and I made a stupid move into him and broke my front wing, and I thought I would be out the race. But with a bit of luck the wing flew off and I was able to continue. I missed my second attack mode which I couldn’t believe. I thought I gifted it to Frijns, but lucky I was able to activate it later and make good move on him and bring it home. A bizarre race and I’m a bit surprised to be on the podium, but roll on Berlin.”