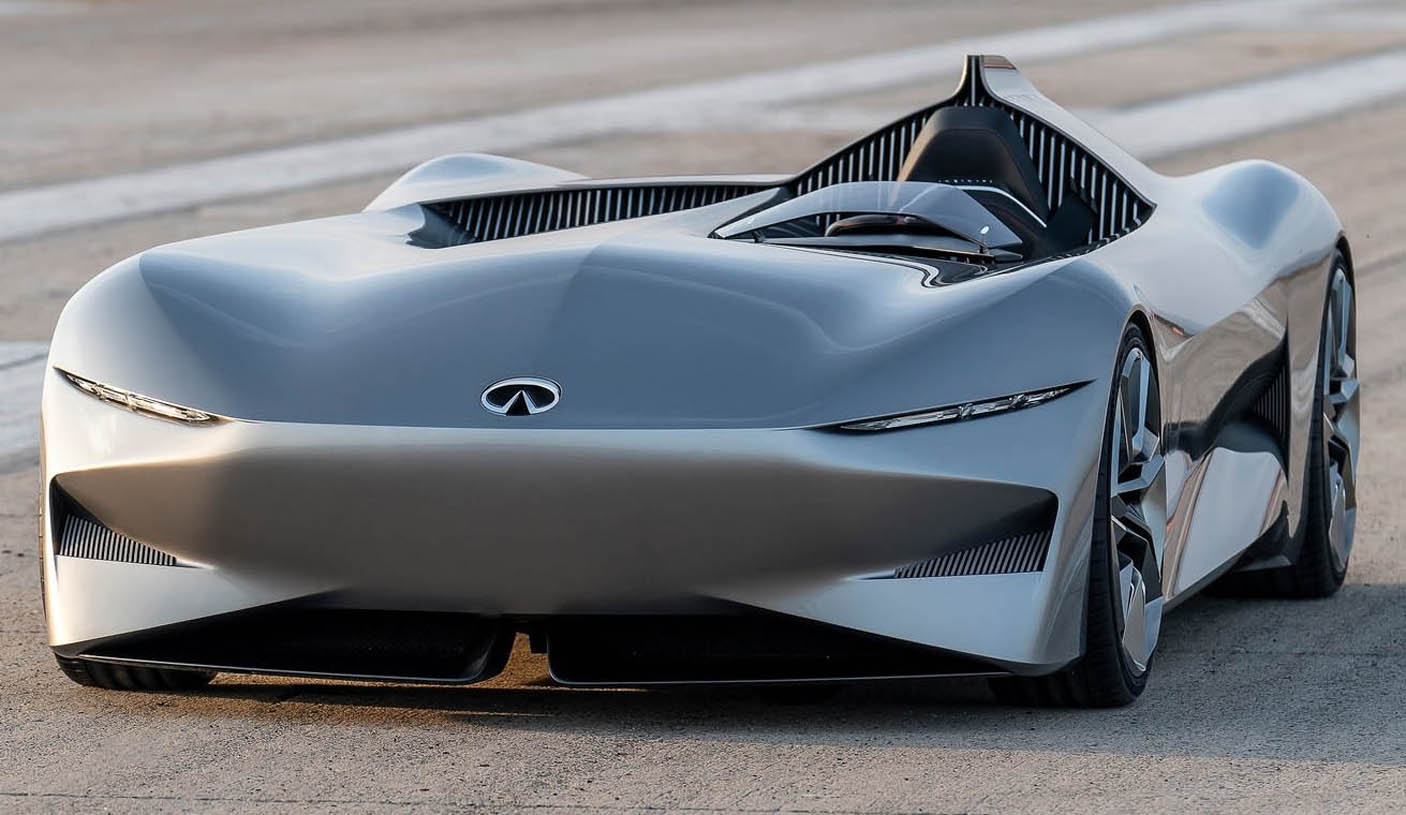 As a brand with technological innovation at its core, electrification is a natural next step for Infiniti. From 2021, every new Infiniti model will be electrified, feature electric drivetrain technology to enhance performance. The Prototype 10 provides a window into Infiniti’s desire to deliver driving pleasure, thrilling performance, and range confidence.

Following the ground-breaking Prototype 9 concept first revealed at the 2017 Pebble Beach Concours d’Elegance, Infiniti has ‘looked back to go forward’ with the Prototype 10. A future vision realised by Infiniti designers, Prototype 10 evokes the spirit of early Californian speedsters, and is informed by some of the most iconic car designs of all time.

This is the first project to come to fruition under the direction of Karim Habib, Infiniti’s new Executive Design Director, and it hints at how the brand’s design teams will evolve the appearance of its production cars. A project spanning the globe, the Prototype 10’s creation has been overseen by Infiniti’s Japan design centre, designed digitally in the UK, and crafted by hand in San Diego, California.

The new concept is resolutely forward-looking in terms of its aesthetics and is a natural evolution of the form language first seen in the Infiniti Q Inspiration and Prototype 9. The monoposto (single-seat) cockpit is consistent with Infiniti’s driver-focused approach, and is indicative of the new opportunities created for Infiniti by adopting electrified powertrains and flexible vehicle platforms.

Inspiration: a speedster for the modern era

In creating the Prototype 10, Infiniti has re-imagined the classic speedster with a cool, clean, forward-looking design. Inspired by the potential for electrification, Infiniti’s new concept seeks to demonstrate the daring spirit of performance that will inform the brand’s production vehicles in the future.

The new concept follows two other design studies revealed by Infiniti in the last 12 months: the Prototype 9 – first revealed in 2017 – and the Infiniti Q Inspiration Concept, unveiled at the 2018 North American International Auto Show in Detroit.

Where Prototype 9 – a sleek, open-wheeled, electric retro-roadster – imagined an alternative history for Infiniti, the Prototype 10 is resolutely focused on what the future holds for the brand. Utterly daring in its bold execution, the new concept is inspired by the spirit of early speedsters, its form and function evoking driving pleasure and thrilling performance. Even its monoposto cockpit is consistent with Infiniti’s approach to creating driver-focused cars. The Prototype 10 also echoes the design of the 2018 Q Inspiration Concept, which previewed a new form language for Infiniti in an era of advanced powertrains. 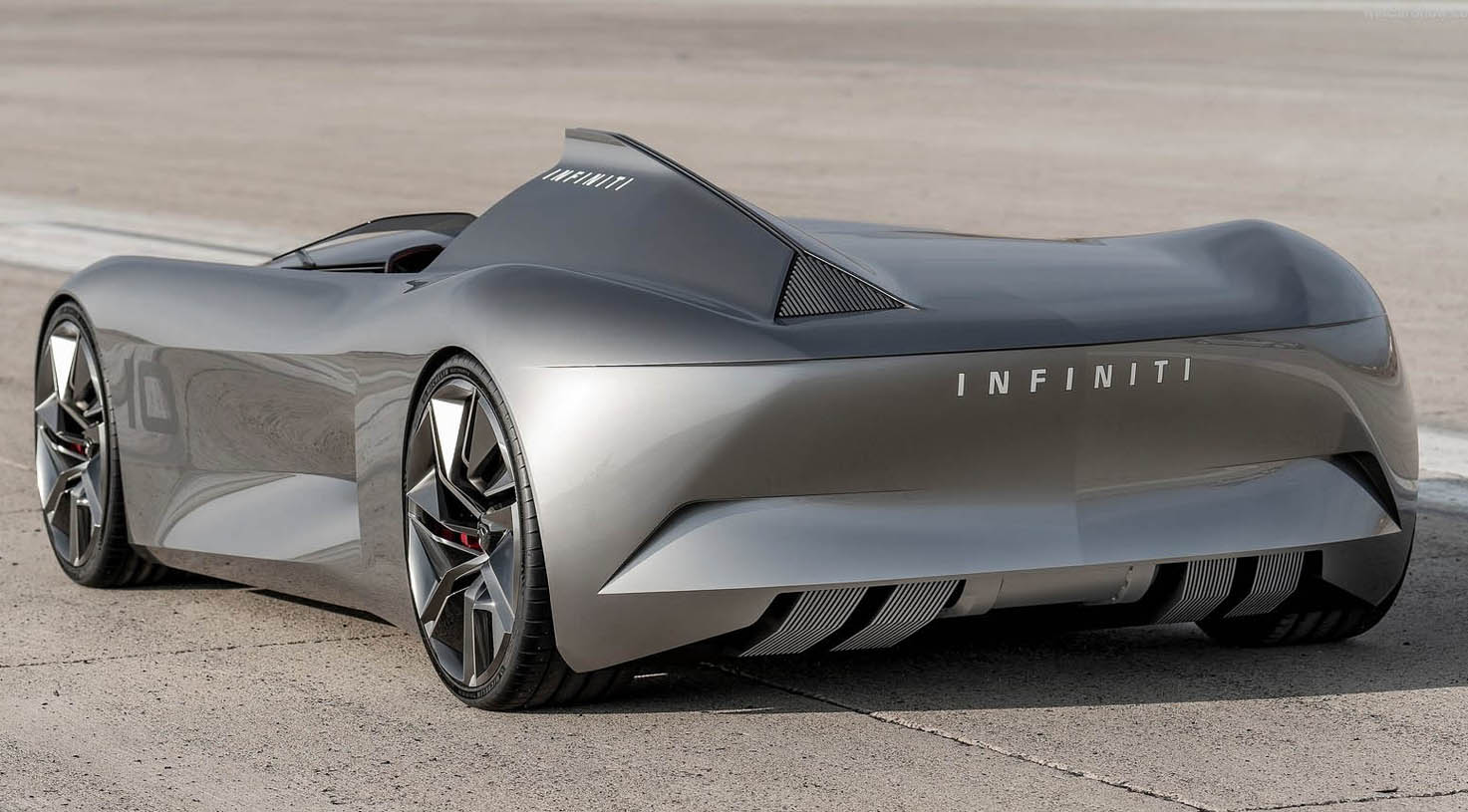 The Infiniti Prototype 10 has been designed under the direction of Infiniti’s new Executive Design Director, Karim Habib. The first project to come to fruition under his instruction, it hints at how Infiniti’s design teams will evolve and adapt the appearance of its production cars in future.

Infiniti’s design teams in Asia, Europe and North America have each been involved in the creation of Prototype 10 from its inception. A forward-looking project on a global scale, its creation has been masterminded by Infiniti’s Japan design centre and forged digitally in the UK. Evoking the spirit of early speedsters, it was to be expected that the project would be completed in San Diego, California – home of Infiniti’s North American design base.

The unveiling at the 2018 Pebble Beach Concours d’Elegance is no accident. California has an automotive culture all of its own, with a rich vein of individual expression empowering car fans and gearheads alike to create their own unique, hand-built machines. This instinct for challenging accepted automotive norms – aided by the ever-temperate weather – meant California was destined to become the spiritual home of the high-performance speedster. A similar passion for expression has driven Infiniti’s designers in creating the Prototype 10, a physical manifestation of the brand’s vision for vehicle electrification.

Designed as a single-seat speedster, the Infiniti Prototype 10 hints at the performance intent of all future electrified models from Infiniti. It doesn’t just embody the brand’s basic desire to electrify its cars, but represents a promise to deliver driving pleasure.

From 2021, all new Infiniti models will offer a mix of pure electric vehicles and e-POWER vehicles – demonstrating the full range of ultra-low emissions technology available. The Prototype 10 seeks to illustrate what drivers will come to associate with the brand’s electrified models. Echoing the performance traditions of the speedster, Infiniti will deliver electric performance of the highest order.

The concept’s design is characterised by clear, concise lines, and confident proportions, without the body volume of the Q Inspiration Concept. With a pared-back, more geometric form, the bodywork incorporates a series of austere, straight lines, particularly evident in the 90-degree relationship between the bodywork and the fin behind the driver’s head. Ultra-modern shapes, and clean, abrupt lines, punctuate a design that would otherwise be characterised by the flowing nature of its bodywork.

In seeking to understand the way Infiniti’s vehicles will look in future, every element of the Prototype 10’s design links to the notion of electrification. As with the Q Inspiration Concept, the concept’s clean, uninterrupted surfaces serve as a reference to the power source that provides an uninterrupted flow of electric propulsion.

The most obvious representation of the car’s performance is its low speedster layout and confident proportions, with its long bonnet and open cockpit contrasted by a dramatic fin behind the driver’s seat.

Where the Infiniti Prototype 10’s unbroken, skyward-facing surfaces reflect the uninterrupted nature of electric motor power delivery, the bodywork itself is punctuated by geometric lines. These lines reference the shock of sudden acceleration enabled by a powertrain which can instantly deliver 100% of available torque with a push of the accelerator pedal. Straight lines give added definition to the grilles at the front of the car, and the side strakes which plunge into the rear wheel arches. The cooling ducts in the open-air cockpit – one behind the driver, one in place of a passenger seat – are also characterised by their sharp geometry, with their very structure appearing to take the form of an electrical pulse. The upright fin behind the driver’s head carves into the rear deck of the car, with razor-sharp forms also evident in the design of the triangular rear light.

The front of the car features a prominent Infiniti badge pressed deep into the bodywork, with distinct creases running over the front fenders and up the centre of the hood. Slashes at the base of the hood house ultra-thin headlights, as sharp in their appearance as the power delivery is direct. Contrasting the silver bodywork, a black chin spoiler at the base of the bumper is designed to enhance downforce at the front, and channel air flow beneath the completely flat underfloor of the vehicle.

Unbroken lines and smooth body surfaces flow rearwards, culminating in a tapered rear deck, similar to that of the earlier Q Inspiration Concept. Once again, the performance spirit is present in the subtle rear diffuser, which channels air out from beneath the car and provides an efficient aerodynamic profile as the car carves near-silently through the air at higher speeds.

The cockpit echoes the design philosophy of the exterior, with clean, flowing surfaces bisected by geometric lines. The hood flows seamlessly into the open-air cabin, drawing attention to the driver’s seat and the large electric motor cooling ducts. The speedster layout encouraged Infiniti’s designers to create a monoposto cockpit, with attention focused solely on the driver. Fully visible from outside the car, the pure, minimalist cockpit captures the essence of Infiniti’s driver-focused approach. Where cabins in Infiniti production vehicles are designed to be ‘driver-focused and passenger minded’, the sole purpose of Prototype 10 is to deliver a thrilling driving experience. In place of a passenger seat, therefore, a large vent lets air flow into the rear of the car to cool the electric motor and batteries.

Infiniti Prototype 10’s cockpit design is inspired by single-seat formula race cars – placing the driver fully in-control with an unhindered view of the road ahead, with ready access to ergonomic controls, and with minimal distraction. Communicating the notion of electrification and performance, Prototype 10’s uncluttered cockpit is fitted only with a driver’s seat, four-point harness, brake and accelerator pedals, and a striking, highly technical race-inspired steering wheel.

The steering wheel is the most visually-arresting element of the cabin, mounted on lightweight carbon fibre struts that extrude out of the bodywork. There is no need for an intrusive steering column due to the presence of Infiniti’s steer-by-wire Direct Adaptive Steering, providing lightning-fast responses to steering inputs. The shape of the struts holding the wheel in place is echoed in the form of the steeply-raked wind guard, deflecting air over and around the driver’s head and into the cooling ducts. The small-diameter wheel itself adheres to motorsport principles, with a flat lower section and distinct grips for the driver’s hands – with no gears to change, an electrified powertrain means fewer physical distractions. Like the Infiniti ‘infinite road’ logo, the centre of the wheel extends away from the driver, leading into a compact instrument display.

The single seat is trimmed in black leather, with red stitching matching the centre of the wheel. Extended side and hip bolsters provide a snug fit and maximum possible lateral support. The seat is mounted as low in the cockpit as possible to help lower the overall centre of gravity, with only the driver’s head visible above the bodywork – it is for this reason that Infiniti designers dubbed this aspect of Prototype 10 ‘The Bathtub’ during its creation.

From 2021, all new Infiniti models will feature electrified powertrains. Electrification is a natural progression for Infiniti, as a brand with technological innovation at its core – and the Q Inspiration Concept and Prototype 10 represent the latest steps in the brand’s shift to only produce electrified cars.

Infiniti’s electrified vehicles will break down many of the perceived barriers to EV ownership. Infiniti e-POWER models in particular will eliminate the need for an external charging source, providing ‘range confidence’ for long journeys while delivering the same memorable and invigorating EV driving experience.

The unique layout of Prototype 10 suggests the approach that Infiniti will take in engineering its new cars. Infiniti’s EV and e-POWER powertrains offer greater packaging flexibility for Infiniti engineers, and afford new creative freedom in design.

Prototype 10 hints at the potential for Infiniti to adopt rigid, modular platforms with flat floors to underpin every one of its new electrified vehicles, and support a new era of design and packaging. Indeed, it’s due to the flat floor that the Prototype 10 driver’s seat can be situated so low in the chassis.

Modular platforms will enable Infiniti to apply e-POWER and battery EV powertrains in new and creative ways within chassis of all shapes and sizes – including saloons, SUVs and sports cars. Electrification also provides the opportunity to introduce a wider variety of drivetrains, including a new e-AWD system, underpinned by electric motor technology, to help transform perceptions of EV performance and power delivery.

Purely a design study at this stage, Prototype 10 nevertheless hints at the inherent flexibility of Infiniti’s approach to platform and powertrain development. The ducts and vents in Prototype 10’s body could enhance cooling for a battery pack, electric motor or even Infiniti’s unique, performance focused e-POWER technology. 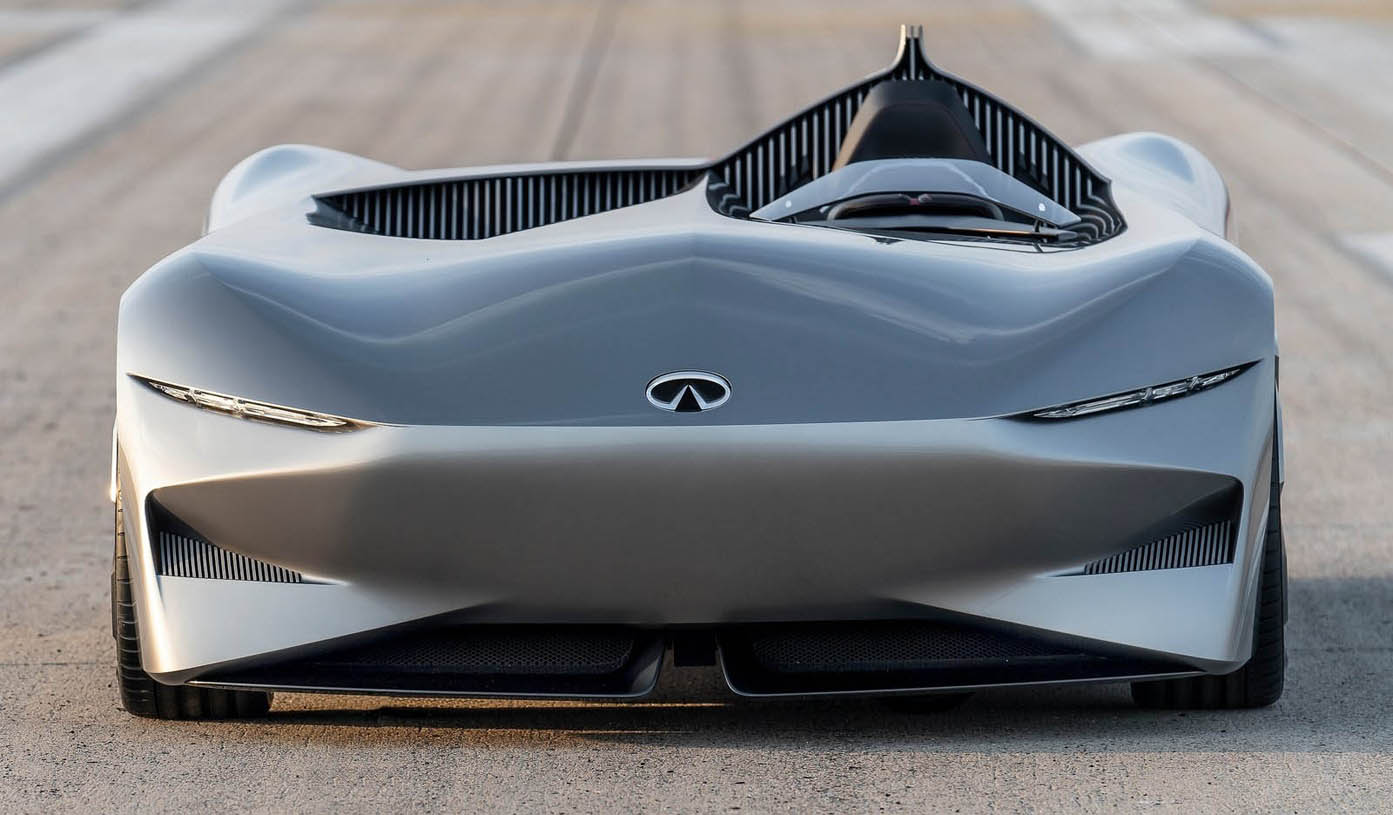 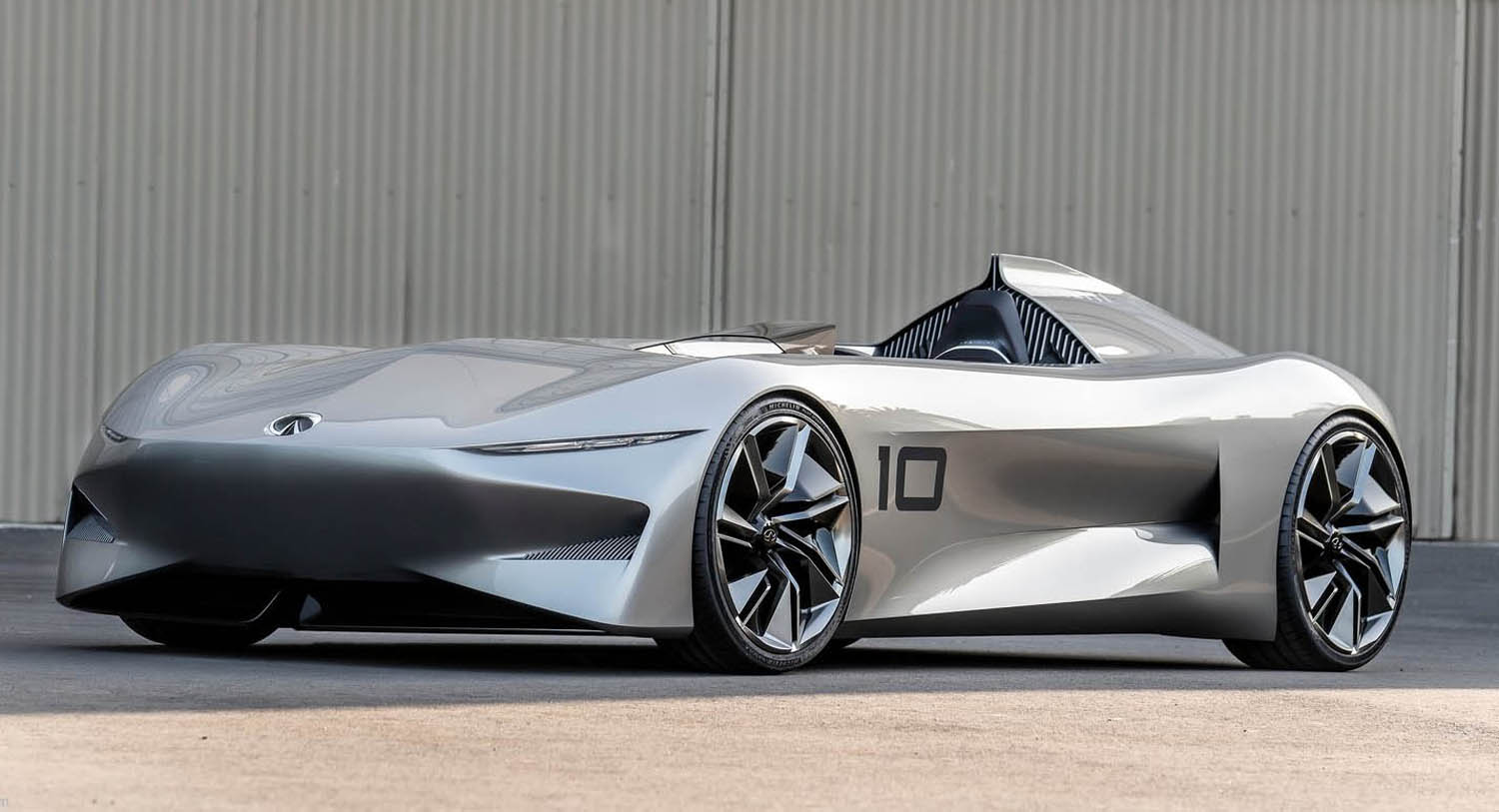 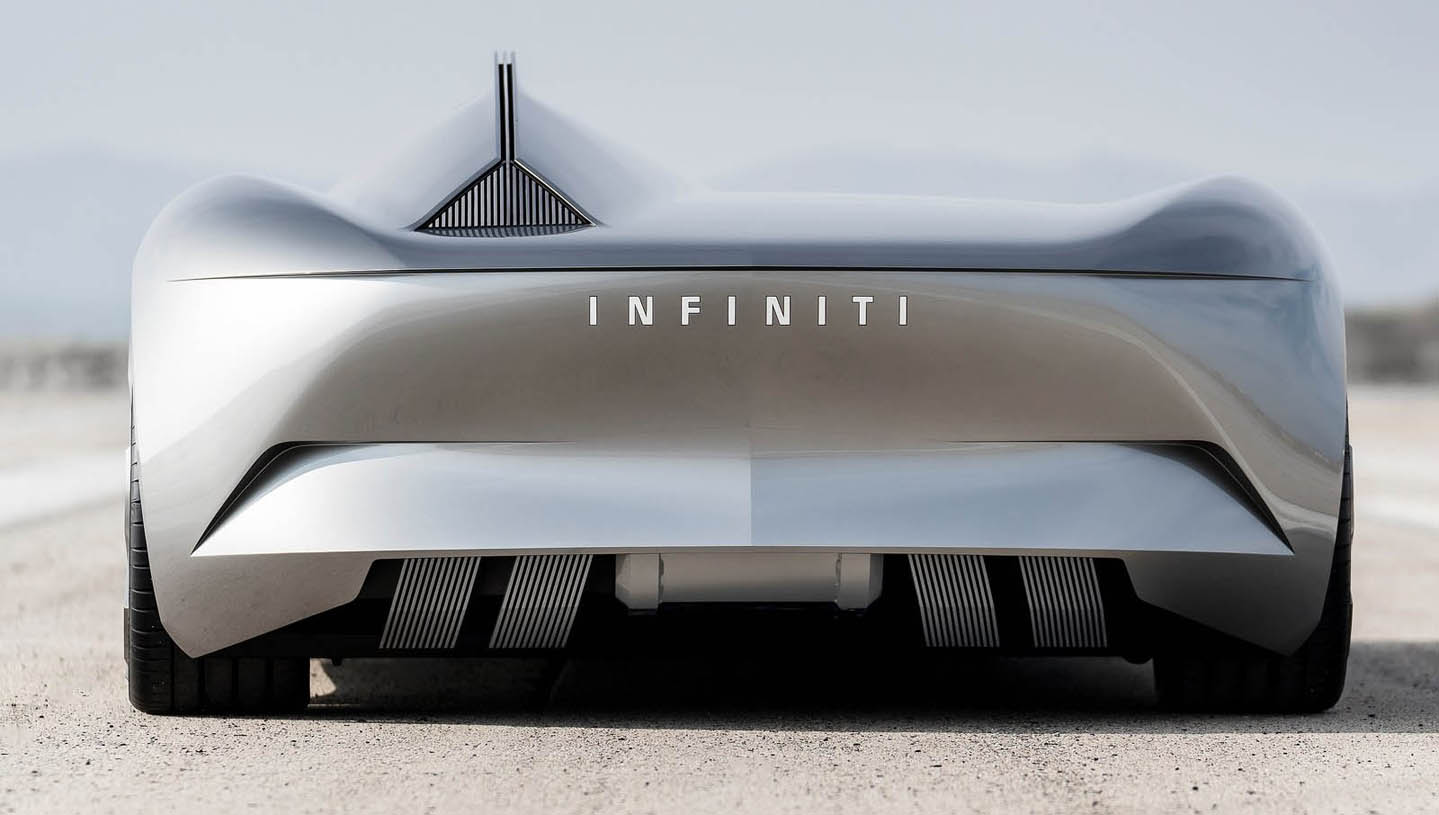 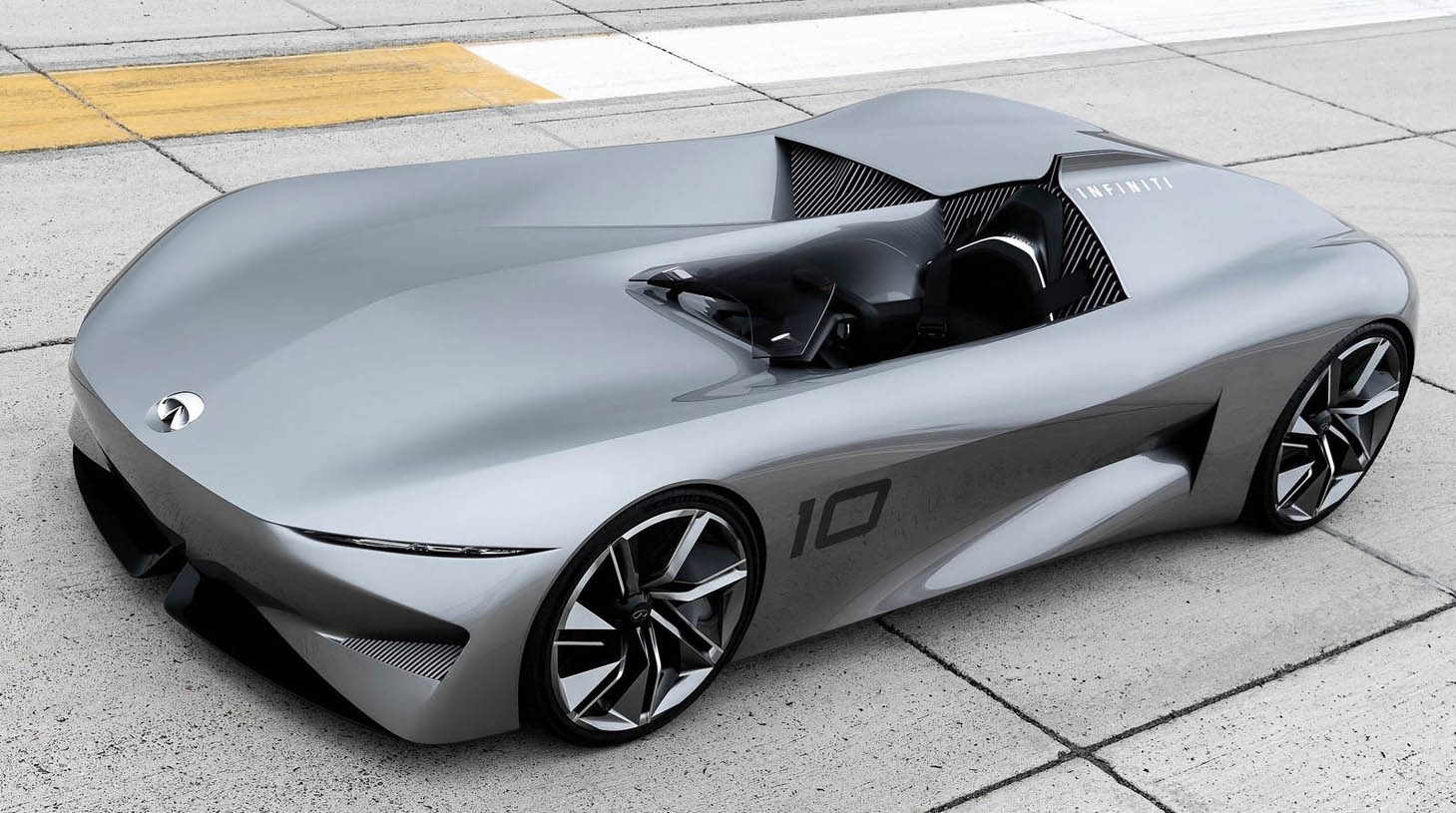 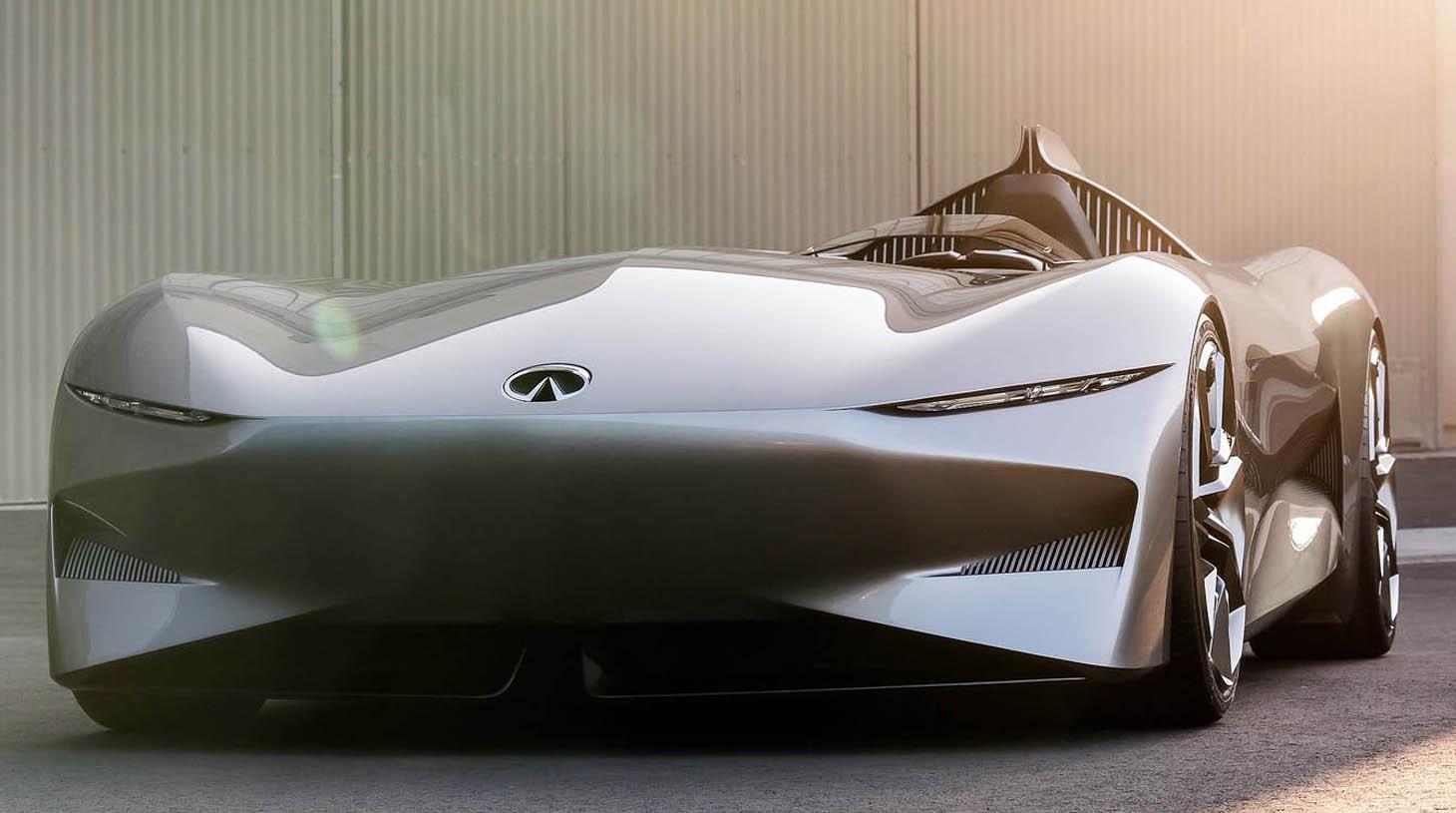 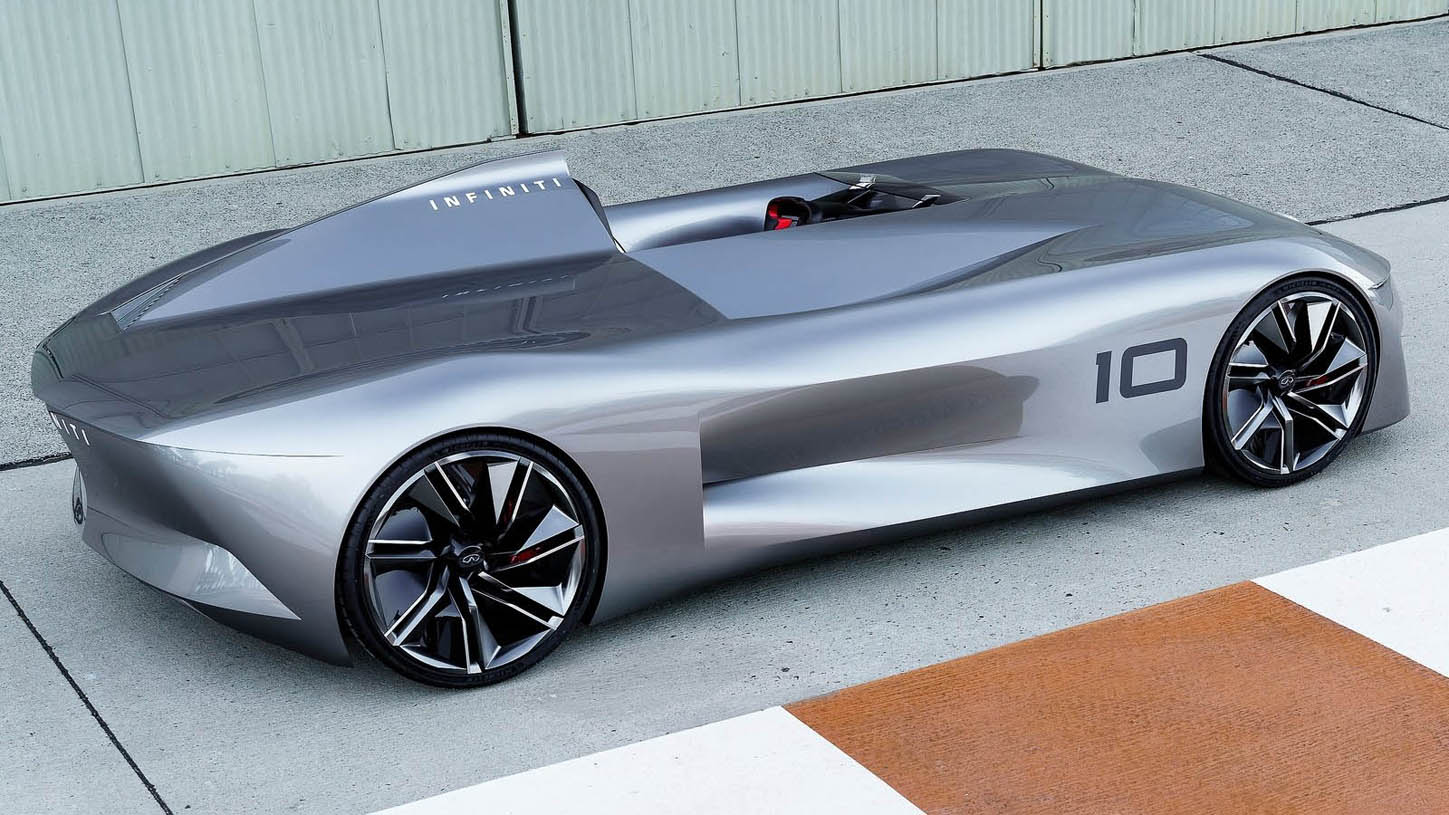 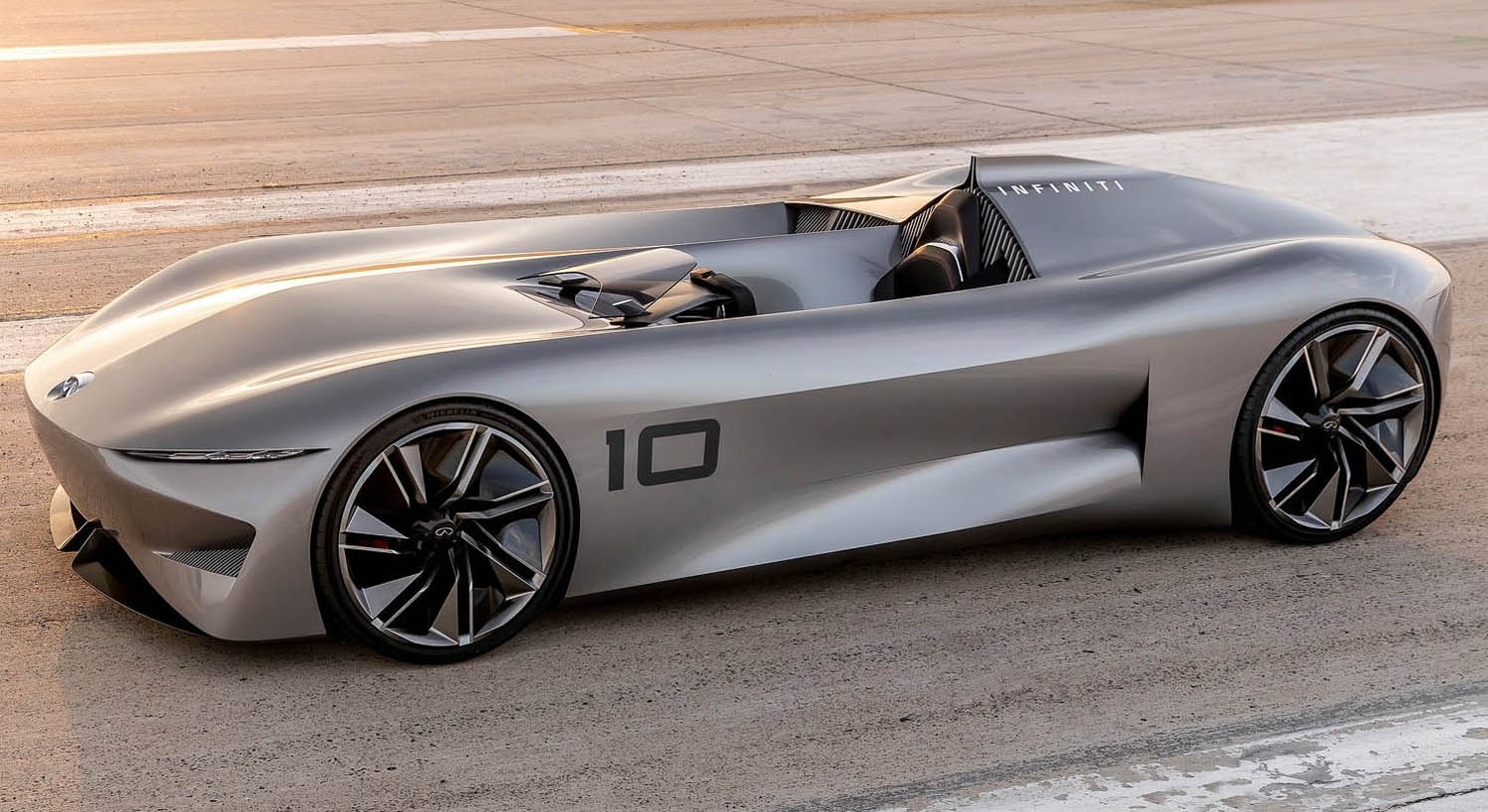 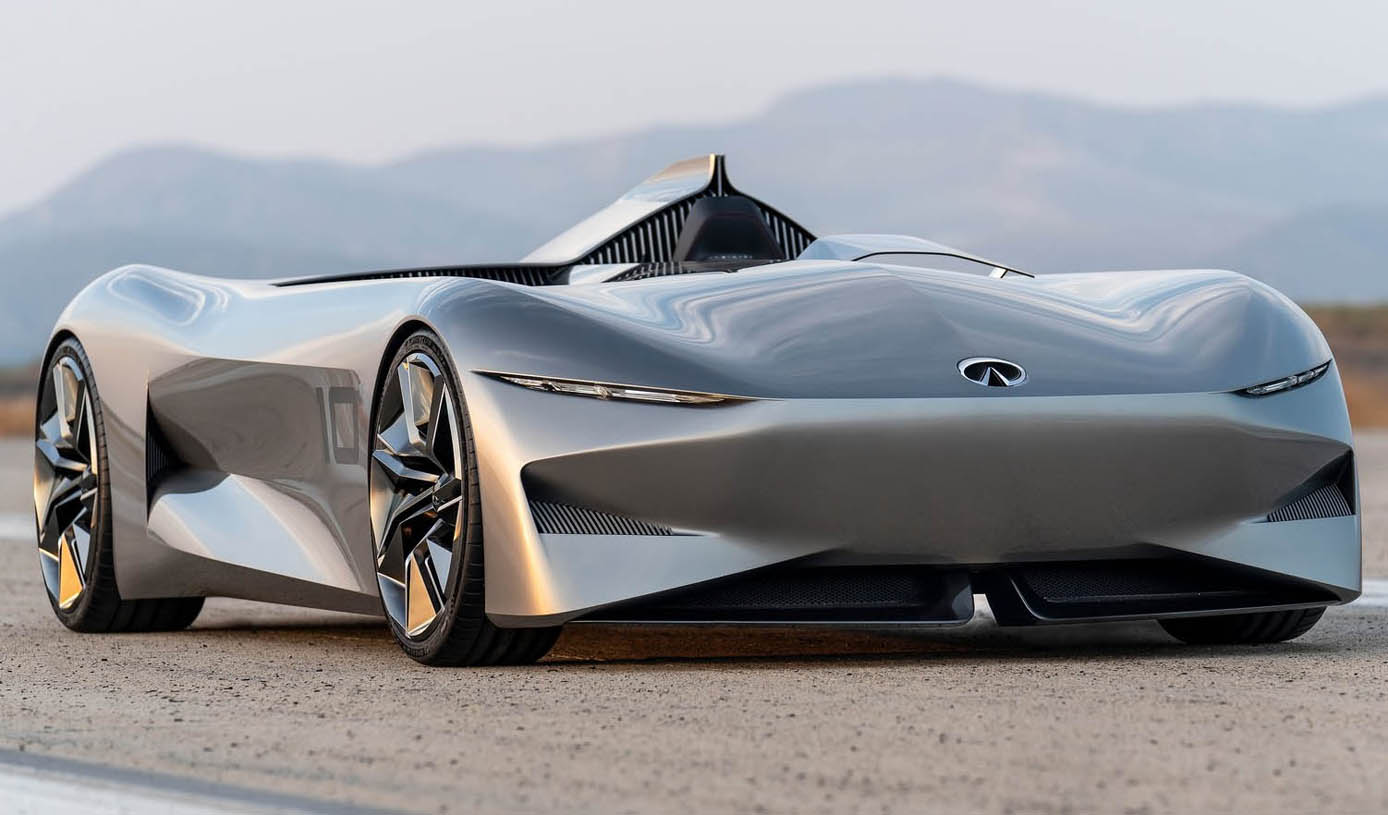 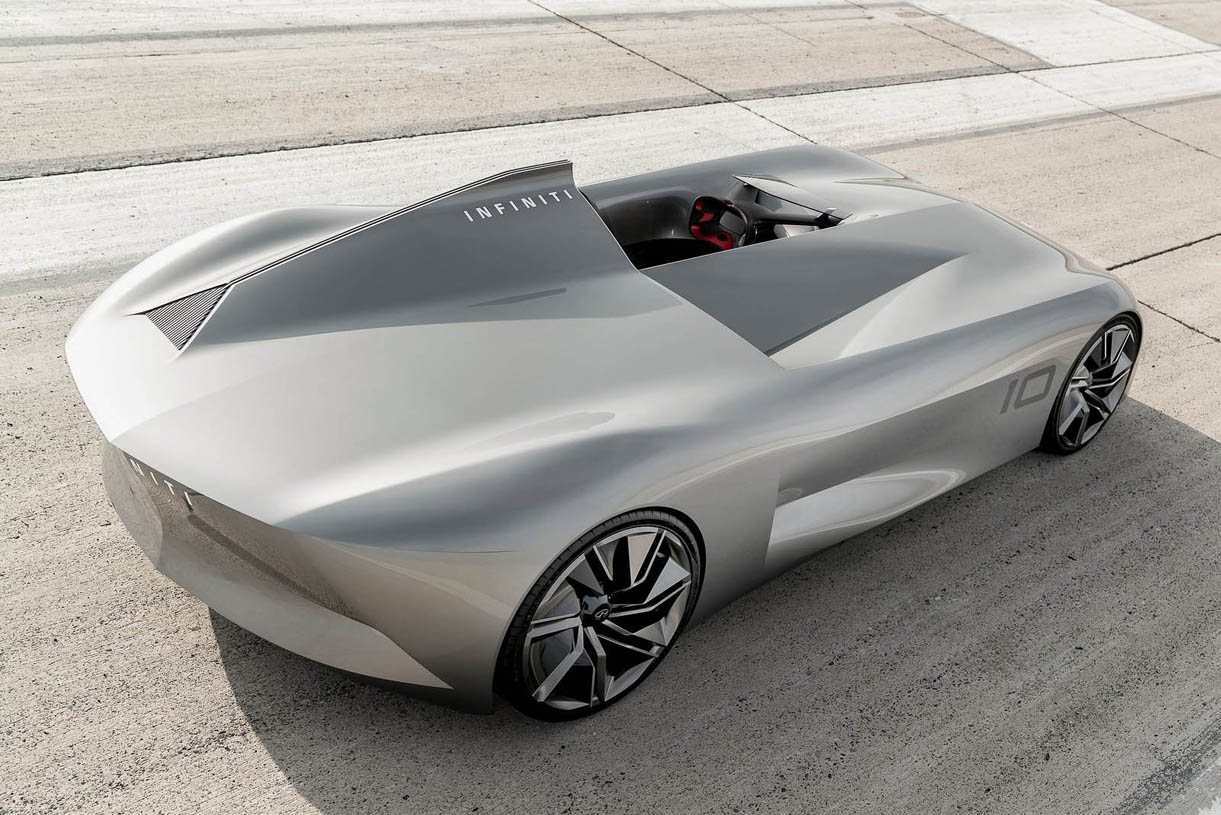 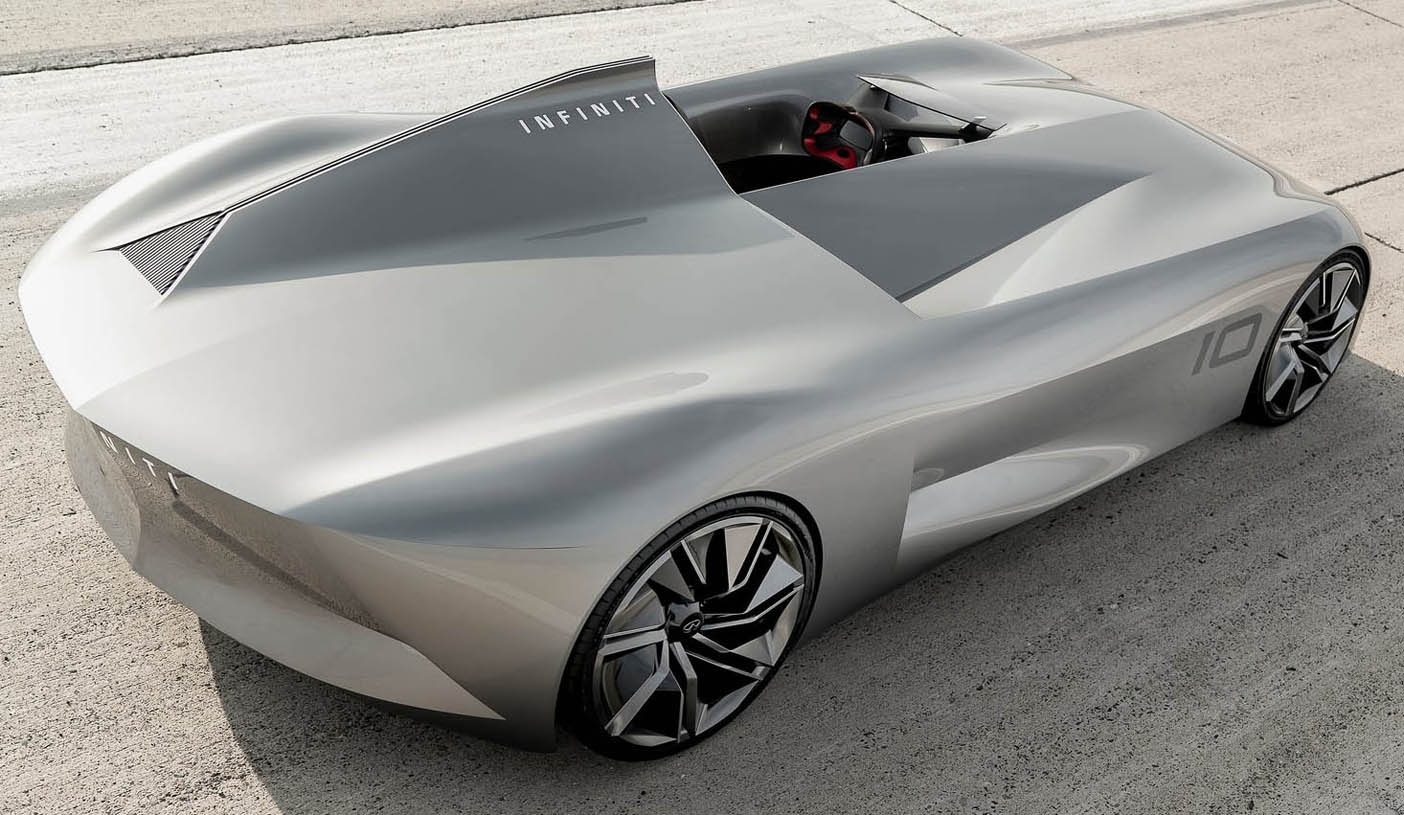 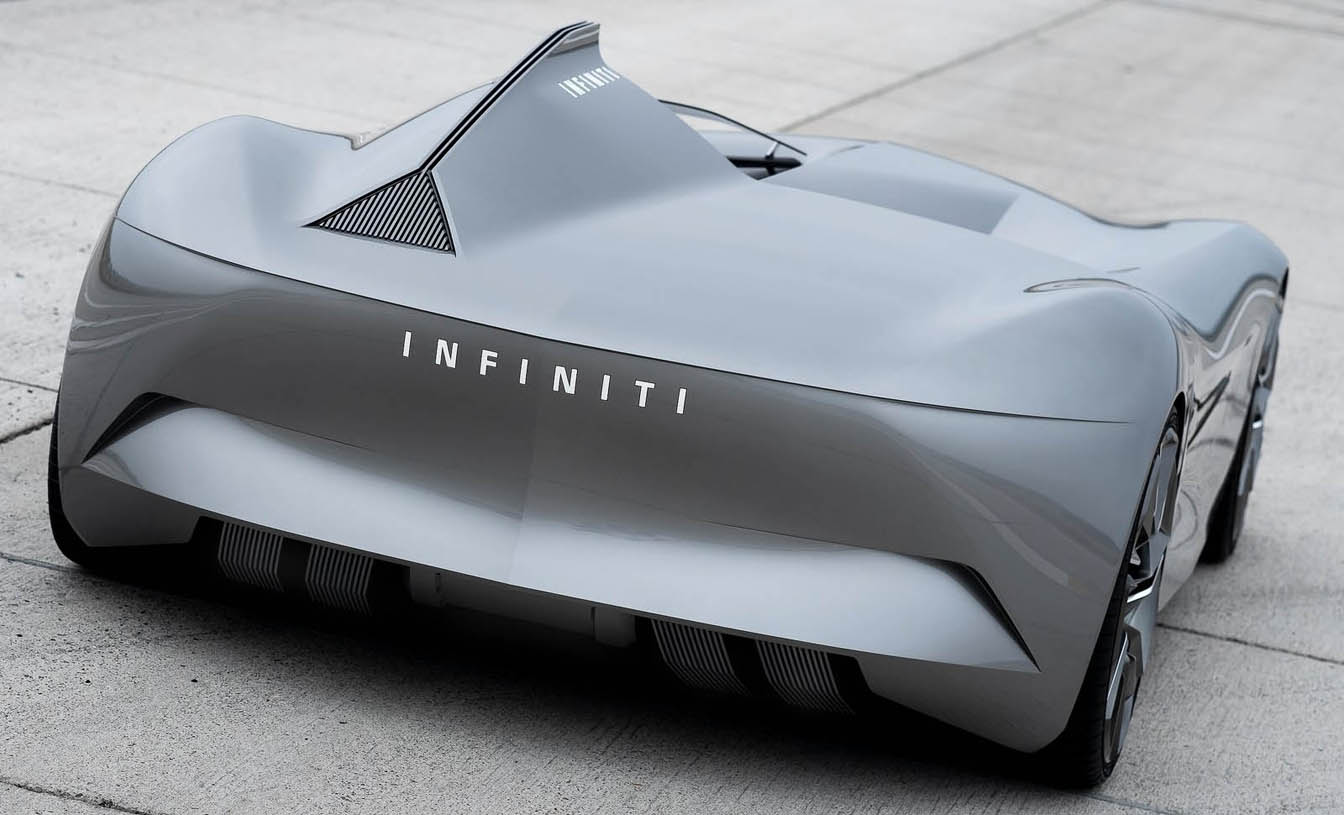 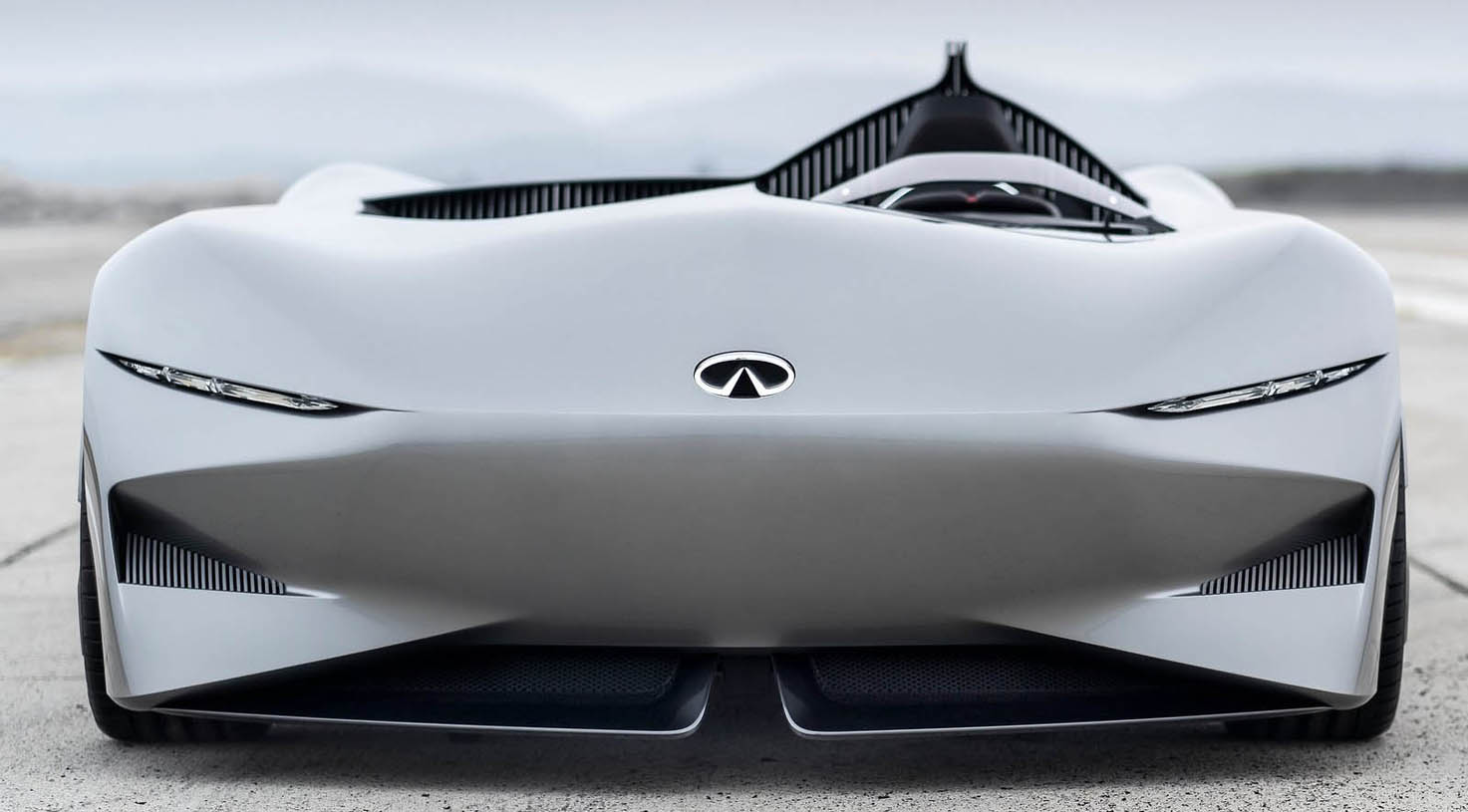