From The 604 To The 5008, The Presidential Peugeots Through History 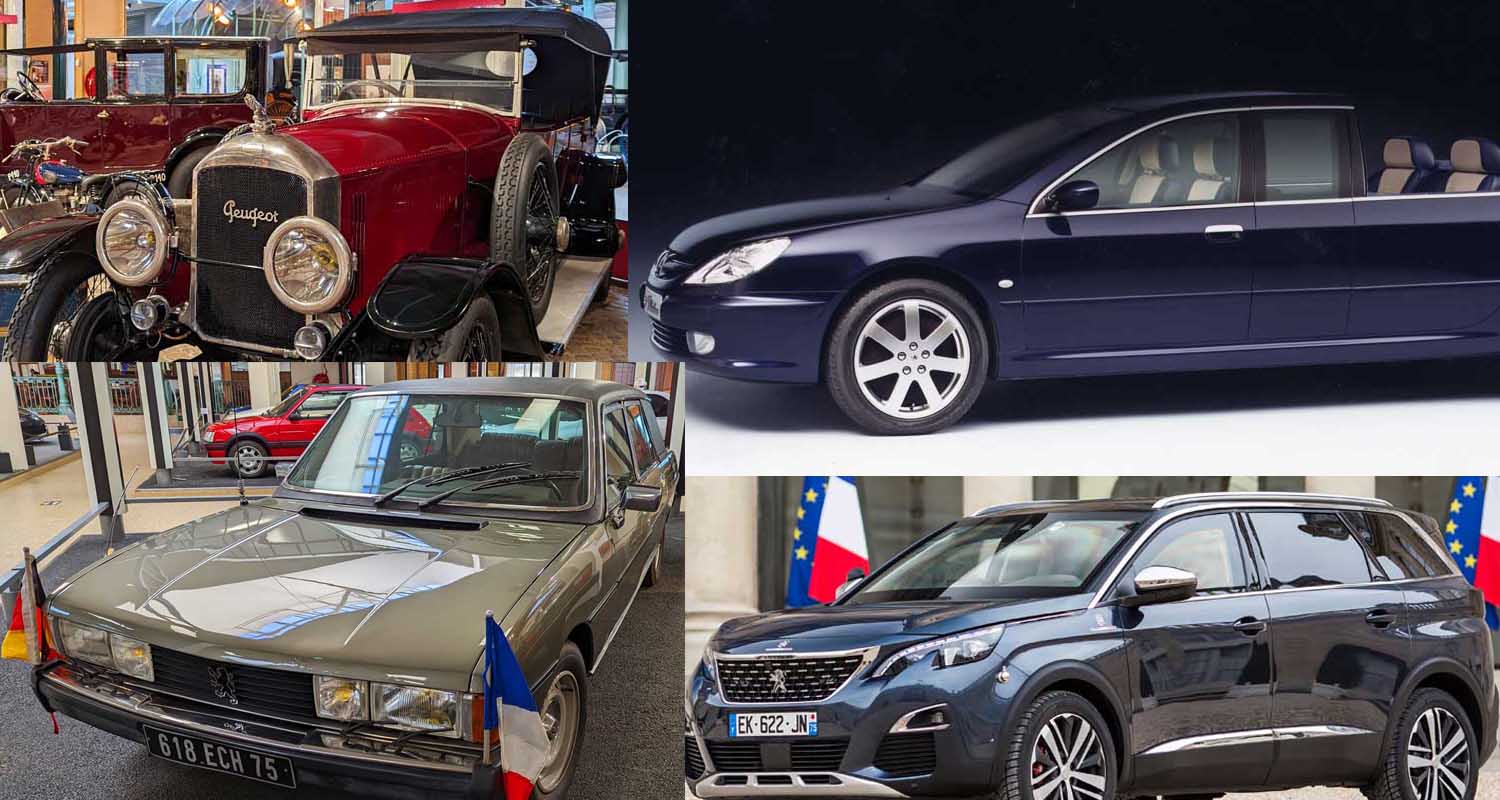 Representation, communication, protection… the President of the Republic’s vehicle is much more than a car! Peugeot has been one of the Elysée’s suppliers for half a century, from Valéry Giscard d’Estaing’s PEUGEOT 604 to Emmanuel Macron’s PEUGEOT 5008. A short stroll through the history of the Fifth Republic…

First we have the more recent history, which has really only just begun. And Emmanuel Macron, the newly elected president, arrived to his ceremony on 14 July 2017 in a Peugeot 5008. He kept this car throughout his first five years in office and this likely makes it the most filmed and photographed car of the last five years. This doesn’t necessarily mean that it is the best known. For obvious security reasons, the Presidency of the Republic has imposed secrecy on the specifics of the car. What we do know is that this PEUGEOT 5008 was produced, like all PEUGEOT 5008s, by the Rennes factory and then entrusted to Centigon, a specialised Breton company which carried out the vehicle’s armouring. For the rest, the only information provided concerns the layout of the rear seats (2 seats instead of 3, with a specific central console), the fitting of front flashers on the radiator grill and the Presidency of the Republic badge was affixed to the bodywork. Everything else is top secret! 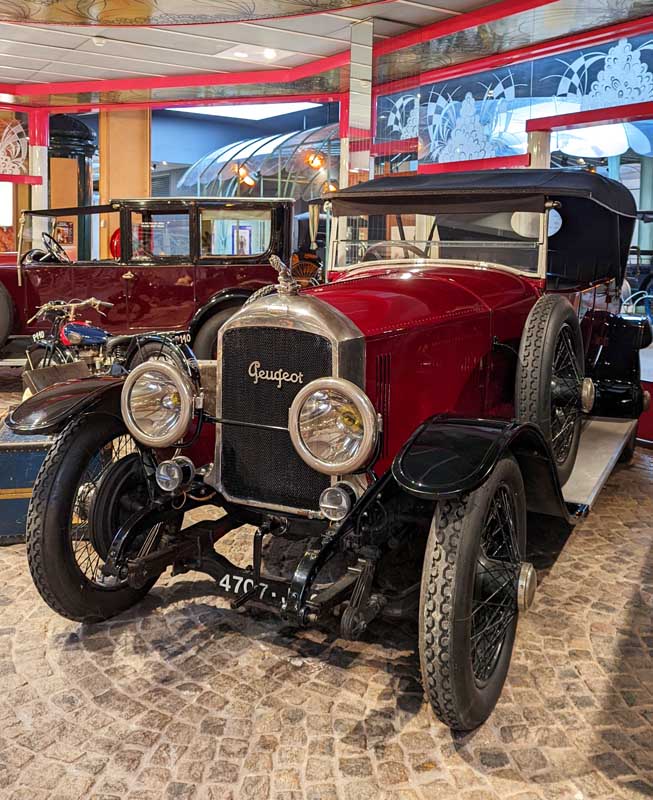 The “prehistory” of Peugeot and the French Republic began in the 1920s. Elected President of the Republic – the third – on 23 September 1920, Alexandre Millerand drove a Peugeot Type 156 from 1921. The Type 156 was the first car to be manufactured in Sochaux and was the top of the range for the brand at the time, with an impressive in-line 6-cylinder engine of 5,954 cm3 reaching… 25 horsepower. 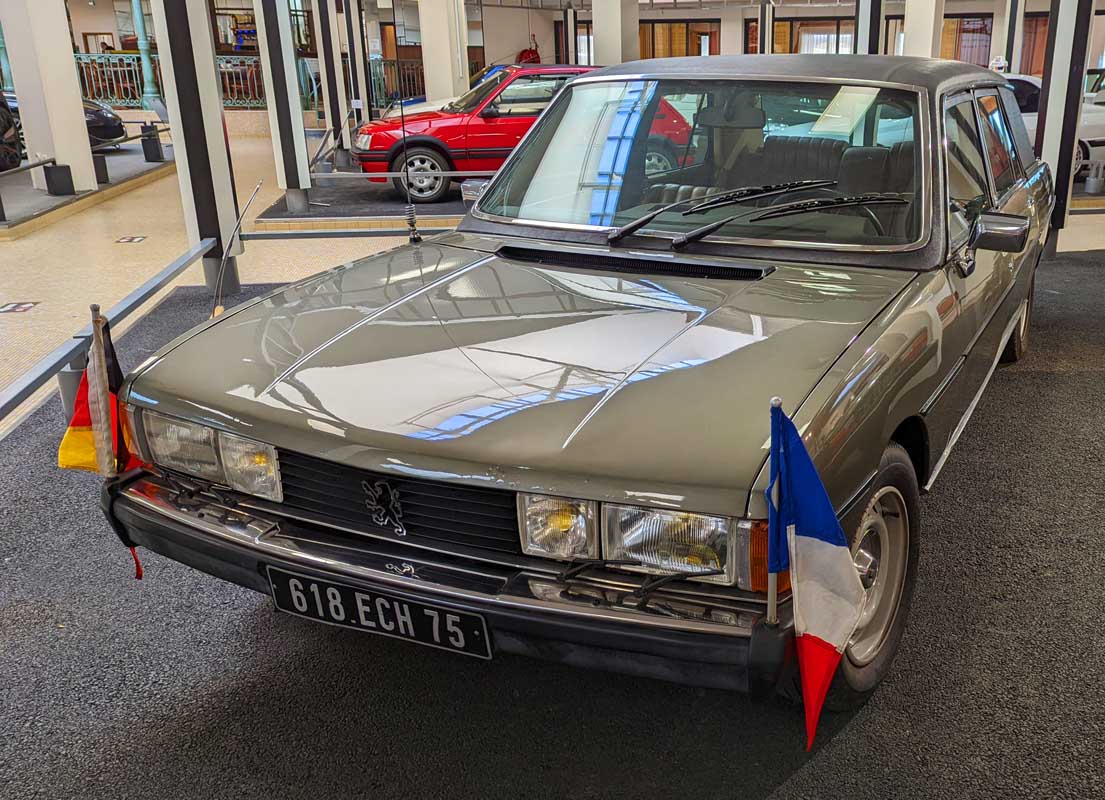 More than half a century later, it was a driving, car and Peugeot enthusiast who was elected by the French as their President. Valéry Giscard d’Estaing brought Peugeot into the Elysée Palace in 1975, the year the brand’s new flagship, the PEUGEOT 604, was launched. Another innovation requested by a decidedly modern Head of State: the President’s cars were no longer black but “moss green”.

Four Peugeot 604s were ordered by the Elysée Palace during the seven-year term. Three of them were production models, top-of-the-range SL versions powered by the 2.6-litre, 136-horsepower V6, which the President sometimes enjoyed driving himself. Alongside these, a PEUGEOT 604 Presidential Limousine is reserved for ceremonial occasions. Made in collaboration with the coachbuilder Heuliez, it has a wheelbase lengthened by 62 centimetres, benefitting the luxuriously fitted rear seats, and a roof covered with black imitation.

On the other hand, the Elysée does not approve the PEUGEOT 604 “landaulet” project (rear seats that can be opened) as suggested by the coachbuilder Chapron. The unique example built in 1979 was delivered to the President of Niger in the end.

In 1991, the Elysée Palace acquired a PEUGEOT 605 that had been lengthened and armoured by the Breton company Labbé (which later became Centigon, the company that prepared the presidential PEUGEOT 5008). This model was equipped with a 170 hp V6 engine, and was fitted with high-strength steel armouring and windows made of a bullet-proof glass and polycarbonate composite. In numbers: 2,500 kg, which is 1,000 kg more than the standard 605 V6! This limousine was mainly used by heads of state hosted in France, such as Mikhail Gorbachev, Hosni Mubarak and Pope John Paul II.

During his twelve year stint in the Elysée Palace, Jacques Chirac regularly used the Peugeot 607s that joined the Presidency of the Republic’s the fleet of cars. But the Peugeot that undoubtedly made the biggest impression on the French at that time was the red PEUGEOT 205 SR, 1984, which the President’s wife drove herself on the roads of Corrèze… 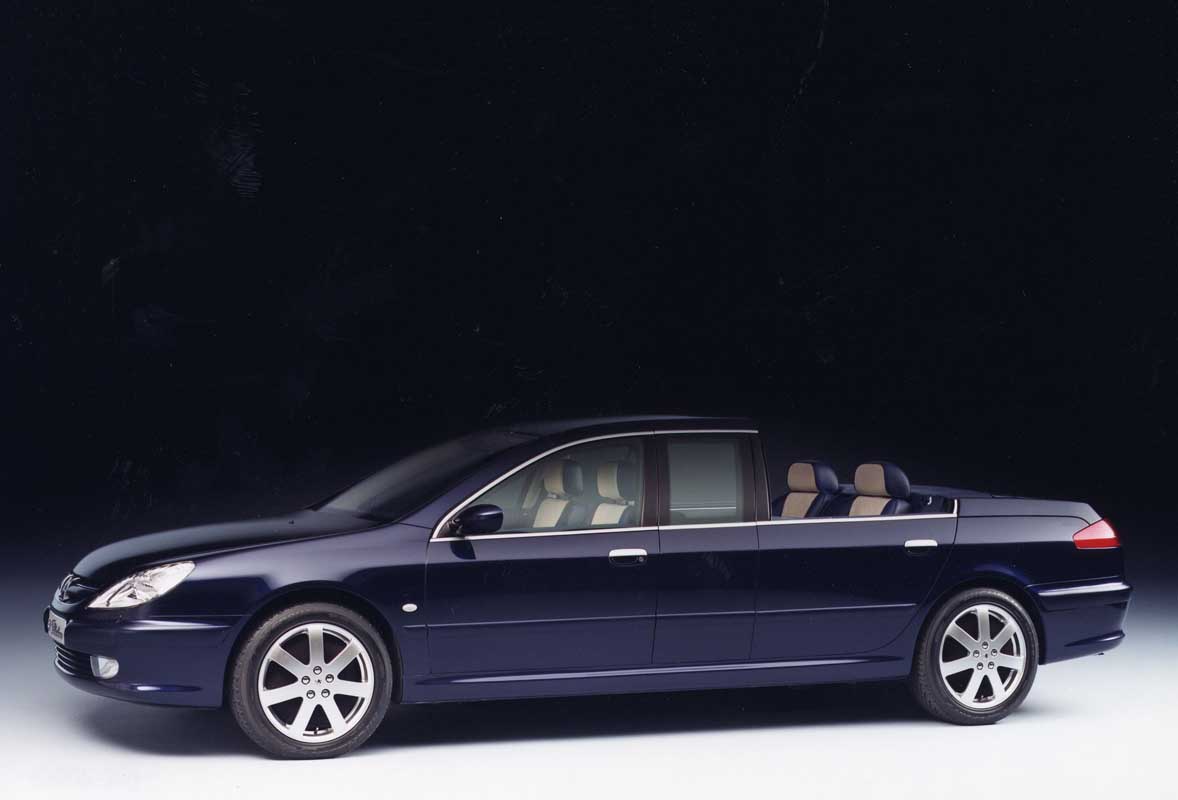 The PEUGEOT 607 Paladine was probably the most spectacular and short-lived presidential car of the Fifth Republic. In 2007, Nicolas Sarkozy’s team was looking for a vehicle that would symbolise renewal and modernity when the new president drove up the Champs Elysées on his inauguration day. Someone thought of the Peugeot 607 Paladine concept car presented at the 2000 Geneva Motor Show. Produced for Peugeot by the coachbuilder Heuliez, this spectacular 607 is a limousine measuring more than 5 metres transformed into a landaulet with a retractable glass roof covering the rear seats. The interior is luxuriously fitted out by the Hermès upholsterer with magnificent blue and cream leather, a bar, two superb electrically adjustable armchairs for the distinguished passengers and a folding seat with its back to the road for a companion.

At the request of Nicolas Sarkozy’s team, the PEUGEOT 607 Paladine was taken from the Peugeot Museum and, on 16 May 2007, France and the world were surprised to see it on the Champs-Elysées. Despite the many changes it has undergone, the car is still just as elegant as the standard PEUGEOT 607. On the other hand, the installation of the retractable roof mechanism meant that the fuel tank had to be smaller: its capacity is now only 6 litres. What was not a problem for a concept car quickly became a challenge when using it regularly, given the weight of the car and the guzzling appetite of its V6 engine. It was therefore decided not to use the PEUGEOT 607 Paladine anymore.

One or two flags? The protocol precisely defines the “decoration” of the presidential car. When the President of the Republic is in the car on an official occasion, the car is decorated with a French flag attached to the right front of the vehicle on the side where the Head of State enters and exits. When a second Head of State or Government is with the French President, the flag of his country is fixed to the front left-hand side, on the side where he enters and exits the vehicle.

Which number plate? Until the 1970s, the Elysée Palace had the reserved use of number plates 1PR75 to 5PR75 for the President’s car. Several vehicles were registered with 1PR75. This tradition has now come to an end, and presidential cars now carry normal number plates assigned chronologically, like for all vehicles, by the Vehicle Registration Service.

What happens to the cars after the president leaves? There is no rule. Some are kept in the Elysée car pool, others are sold or given to museums. For example, Millerand’s Type 156, Giscard d’Estaing’s PEUGEOT 604 limousine, Mitterrand’s PEUGEOT 605 limousine and the PEUGEOT 607 Paladine are kept by the Musée de l’Aventure Peugeot. 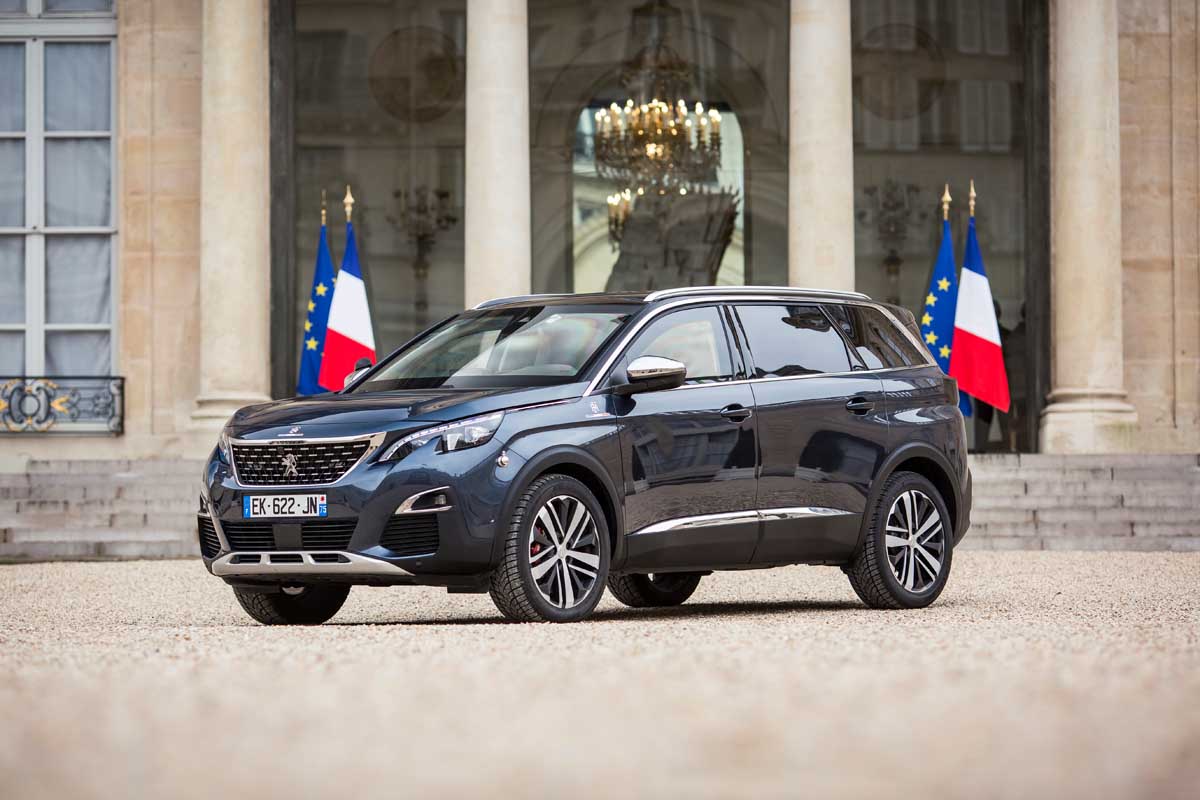