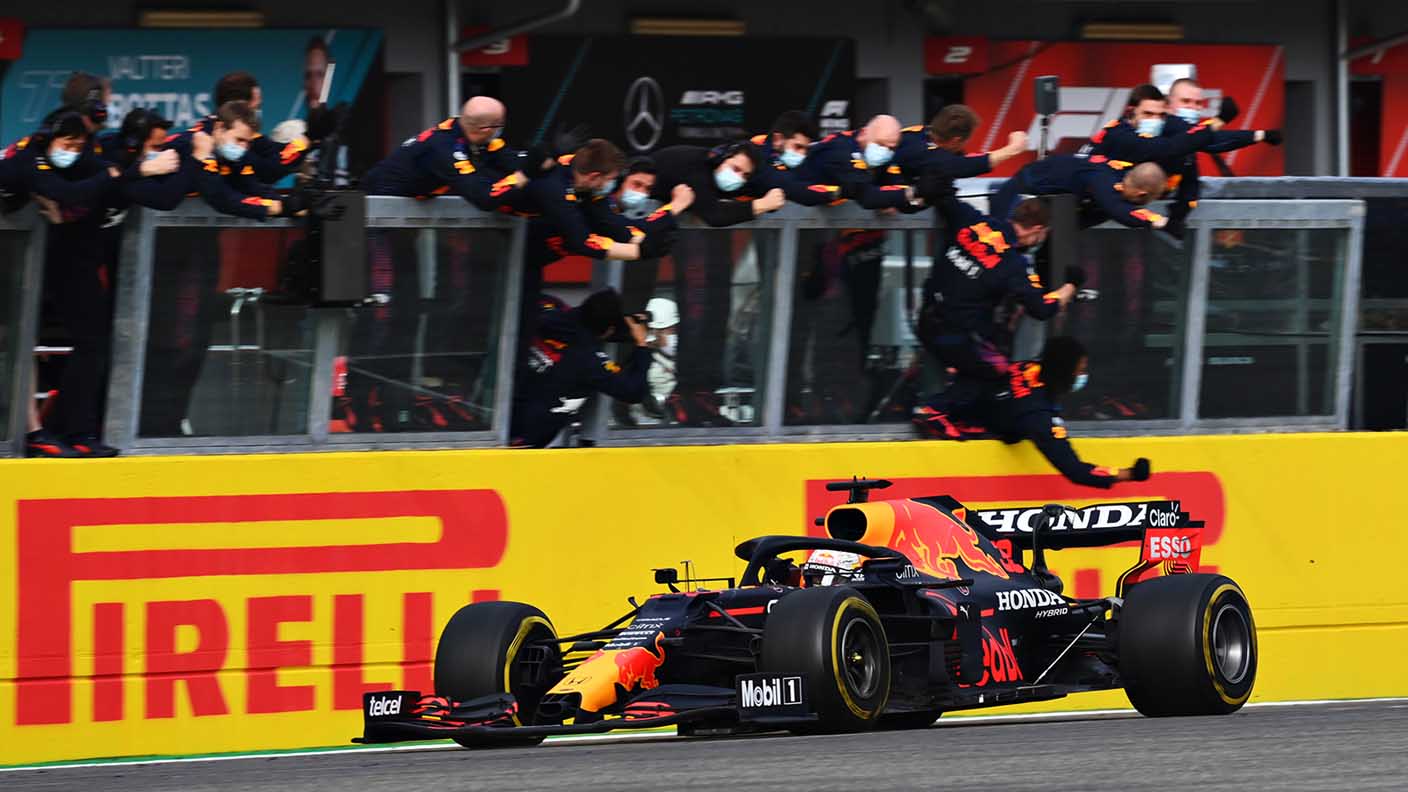 Red Bull Racing’s Max Verstappen navigated a treacherous wet start, safety cars and red flags to take his first victory of 2021 as Lewis Hamilton recovered from a mid-race spin to fight back to second place at the end of an incident-packed Emilia Romagna Grand Prix.

The Imola circuit was hit by heavy downpours in the hour leading up to the race start and on the laps to grid the track proved difficult as Alpine’s Fernando Alonso when he spun off and damaged his front wing. The Spaniard made it back to the pit lane for repairs and took the start but his troubles were a sign of just how difficult the conditions would prove to be in the early stages of he race.

However, despite the treacherous conditions Verstappen made an excellent start from P3 on the grid and passed team-mate Sergio Pérezx and and pole-sitter Lewis Hamilton in the first chicane to taske the lead. In a bruising overtaking move, Hamilton was forced wide and the champion recovered recovered Pérez also tried to get past. The Mexican was forced to back off, however, and losing pace he lost a place to Ferrari’s Charles Leclerc.

Moments later as the field swept up the hill from Tosa, Williams’ Nicholas Latifi slid off track at Piratella. He kept his car going but as he rejoined the track he collided with Haas’ Nikita Mazepin and was bounced into the wall. The safety car was swiftly deployed.

When racing resumed at the end of lap six Verstappen controlled the re-start well to keep Hamilton at bay, while Leclerc held fourth ahead of Pérez. However, under the safety car the Mexican had a spin and afterwards was deemed to have illegally overtaken cars to return to fourth place behind Leclerc. He would later be handed a 10-second time penalty by the stewards for the transgression.

At the front, Verstappen was regularly putting in fastest laps and by lap 16 he had built a five-second gap to Hamilton. Leclerc was now 15 seconds behind the lead Mercedes, with Pérez a further eight seconds back.

As the one-third distance point arrived, Aston Martin’s Sebastian Vettel judged the conditions to be good enough for slick tyres and he pitted for medium compound Pirellis. Soon the German was setting personal best times and Red Bull responded by pitting Verstappen for mediums at the end of lap 27.

Mercedes then pitted the world champion at the end of the following lap. The stop was slow at 4.0 seconds, however, and as he made his way to the pit exit Max powered past in the lead once again.

Checo made his pit stop at the end of the next tour. The Mexican not only served his 10s time penalty but also changed his steering wheel and he rejoined in fifth place, behind Leclerc and Norris.

After a brief period of incident-free racing, drama erupted when Hamilton lost control and went off track at Tosa as he tried to navigate his way past back markers. He slid across the gravel and came to a halt just before the barriers. However, as he tried to get going again he hit the wall and damaged the front wing. The Mercedes driver rejoined eventually but it looked like his race was run. However, within moments he was granted a reprieve soon when Williams’ George Russell and Mercedes’ Valtteri Bottas were involved in a heavy accident.

Russell went to overtake the Finn but as Bottas defended, the Williams driver put a wheel on the grass on the right side. He slammed into the side of the Mercedes and both cars hit the barriers hard. The safety car was deployed but with debris strewn across the track at Tamburello the red flags were soon shown.

The race was suspended for some time as the track was cleared but at 1625 local time the cars flowed out of pit lane to prepare for a rolling start. The track was still tricky, however, and Verstappen was almost caught out by the conditions.

Trying to warm his tyres, the race leader lost control in the final Rivazza corner. He managed to regain control, however, and narrowly avoided a costly spin just as the safety car was about to leave the track. Within seconds racing resumed and Verstappen showed great composure to fend off a challenge from Leclerc to hold the lead.

Behind them, Lando Norris, who had moved to soft tyres during the suspension, managed to get past Leclerc to steal P2, with Pérez now in fourth place ahead of Sainz. Pérez then spun at the exit of Turn 4 and dropped back to P14. The Red Bull driver managed to claw back two places by the end of the race but it was a frustrating afternoon for the Mexican.

At the front, however, his team-mate was in total control. On Medium tyres Verstappen stretched away from Norris and then set about managing his run to the flag.

Hamilton, who took the rolling start in P9, put in a determined fight back in the final third of the race, but despite dragging himself back to P2 in the closing stages, he could make no impact on the yawning gap to Max and after 63 incident-packed laps, the Red Bull driver crossed the line 22 seconds ahead of the Briton to claim his first win of the year.

Norris’ gamble on soft tyres for the re-start paid off too. Although he was unable to jeep Hamilton at bay in the final laps, the McLaren driver nursed his fading tyres to the flag in third place to take his second career podium finish.

Hamilton’s determined comeback netted the Briton fastest lap in the closing stages and the extra point for that means that he leaves Imola with a single-point lead over Verstappen in the Drivers’ Championship standings. 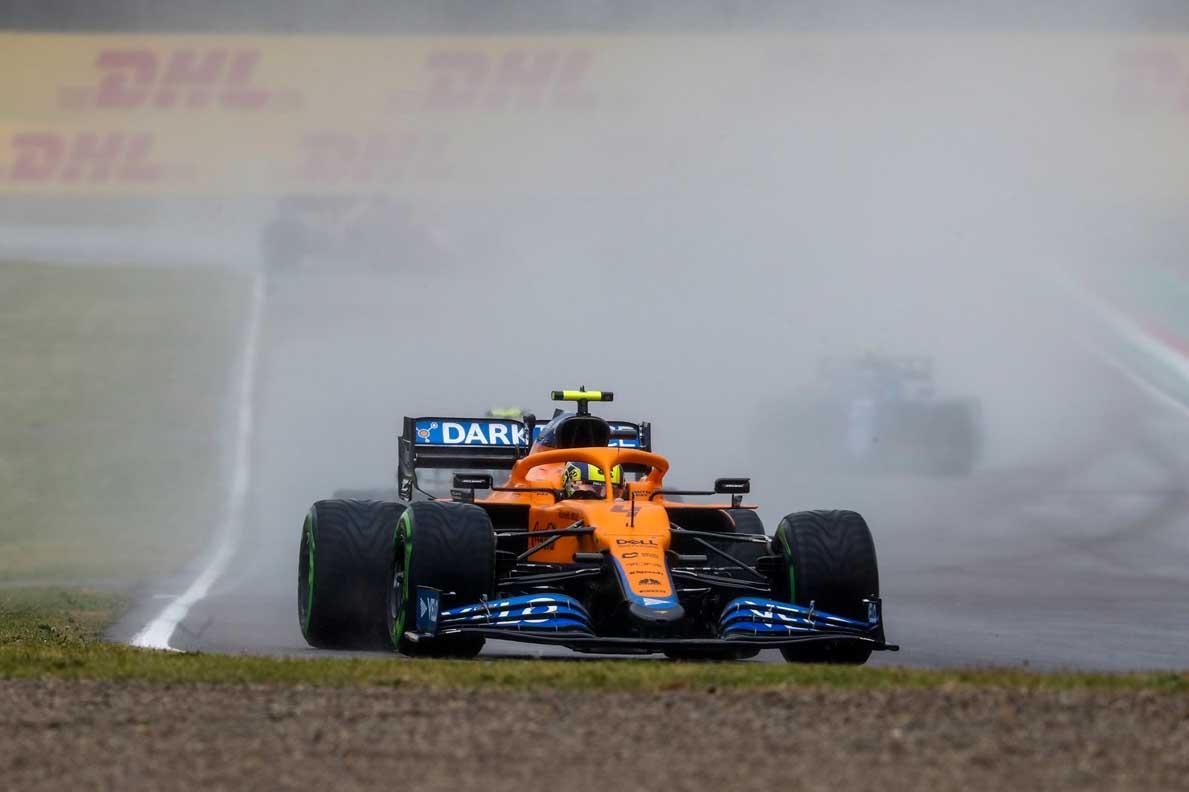 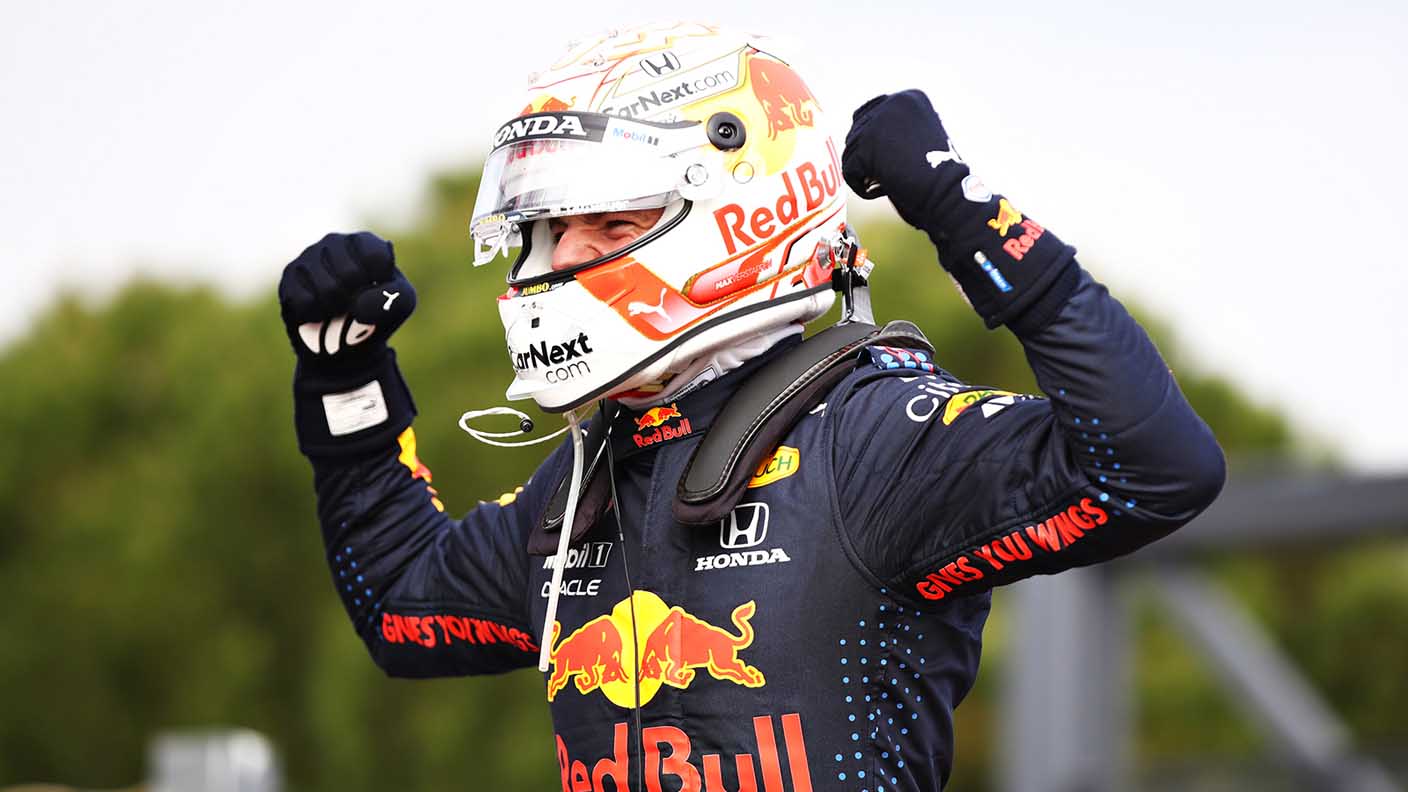 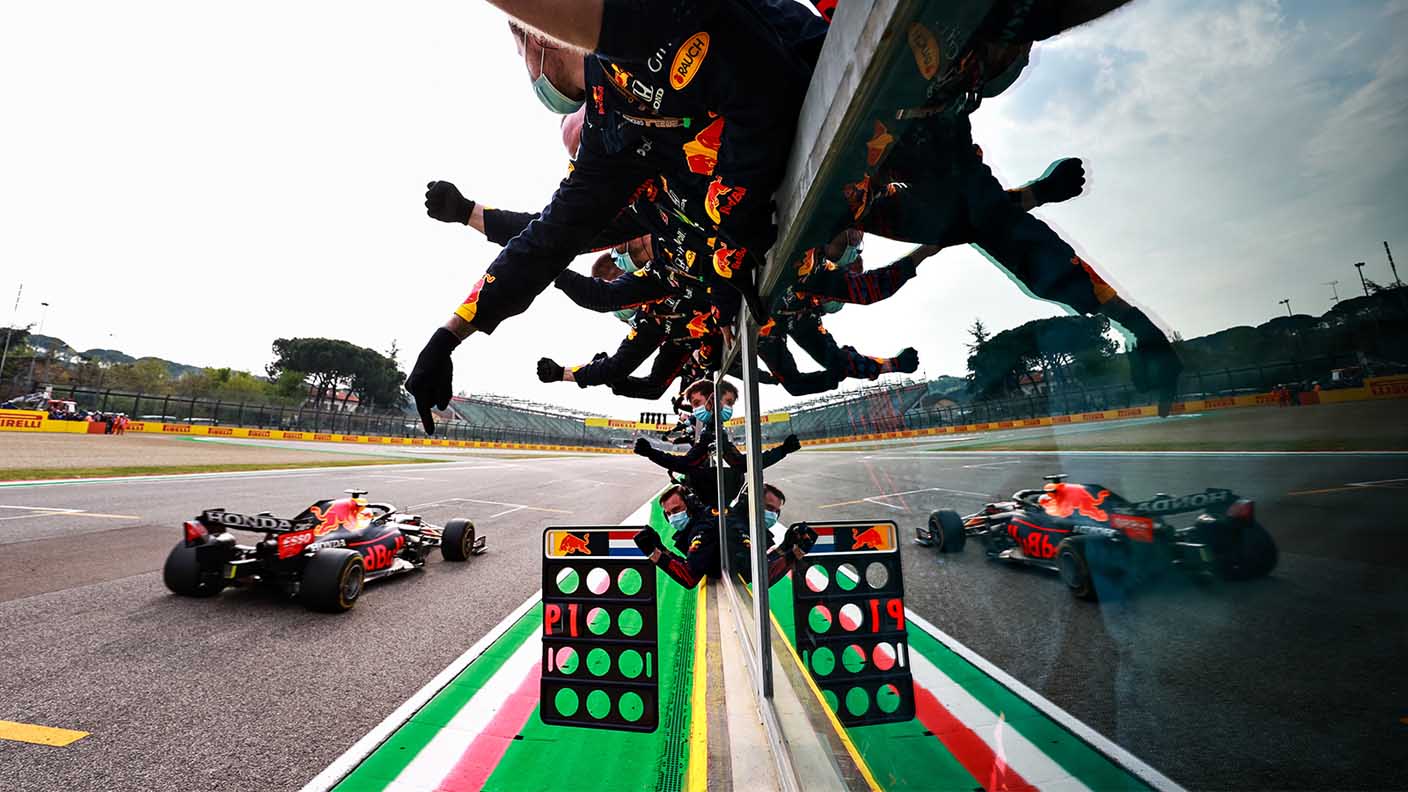 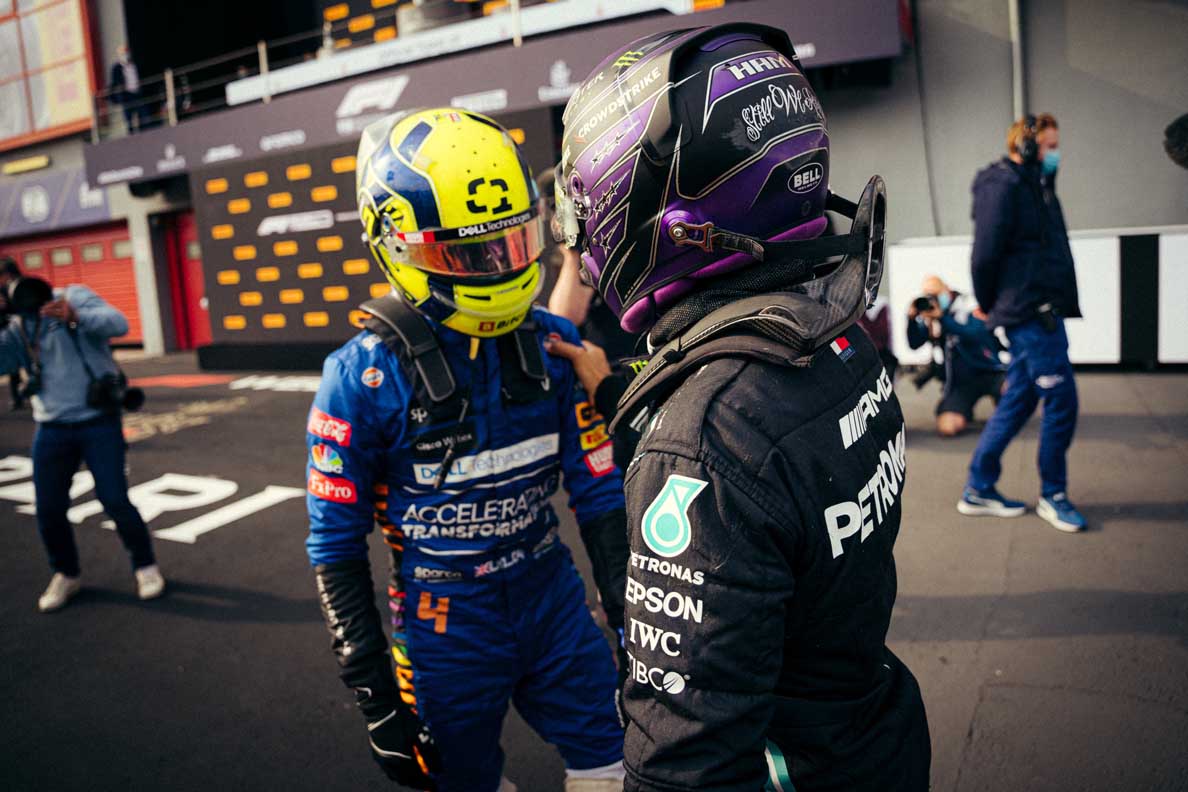 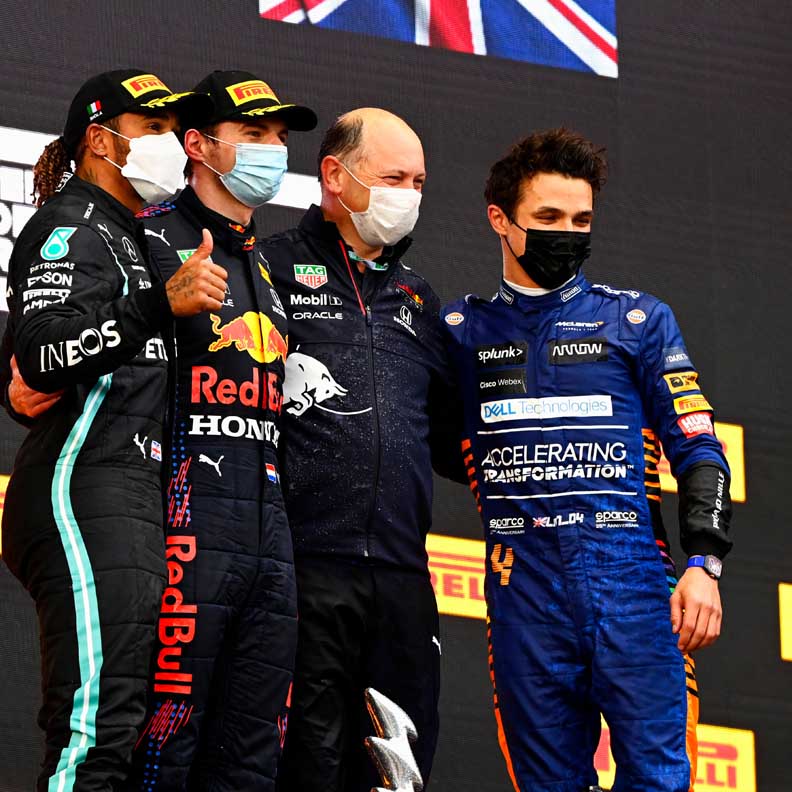 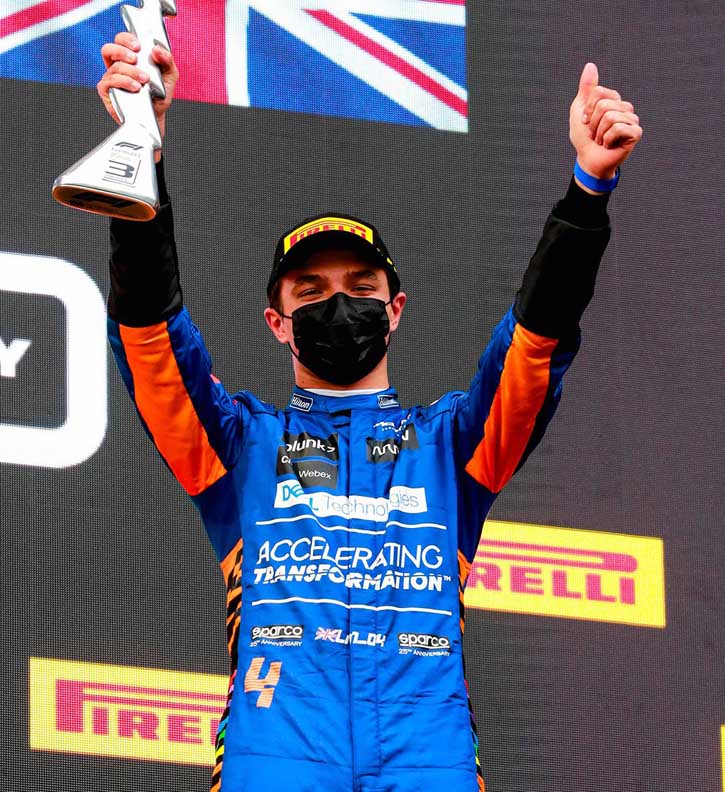 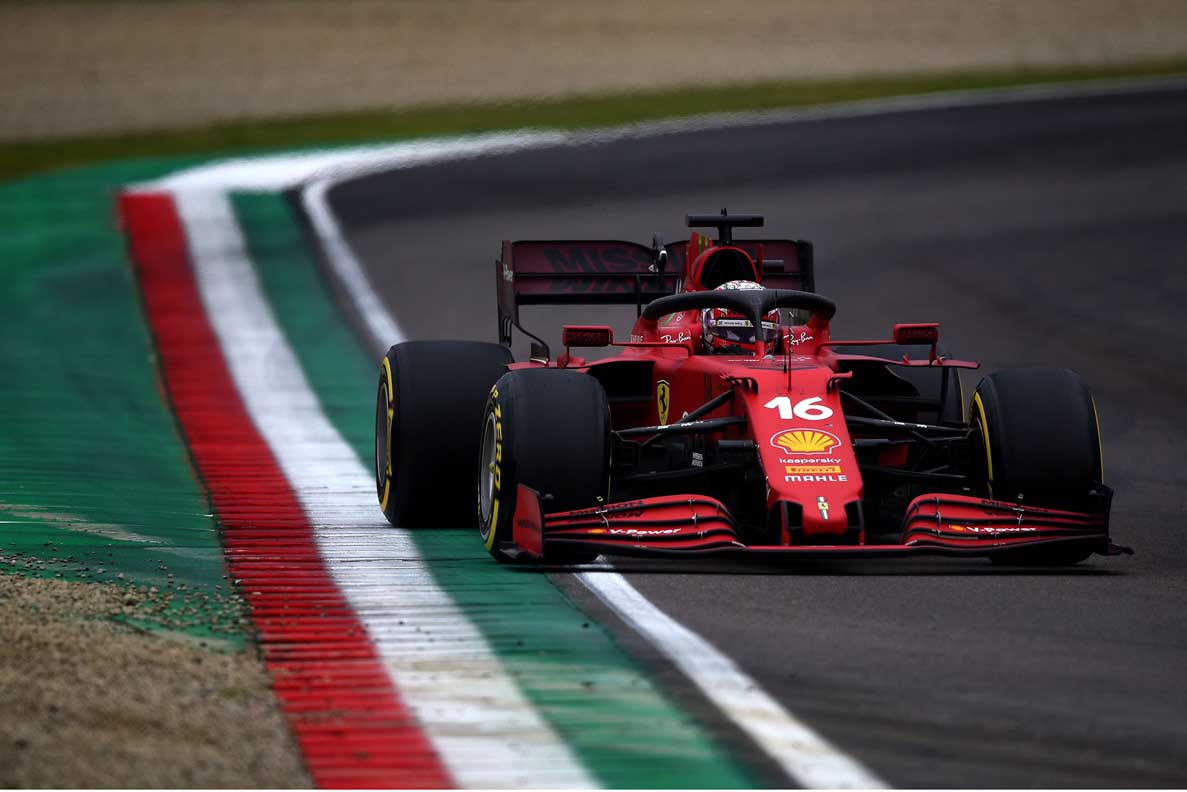 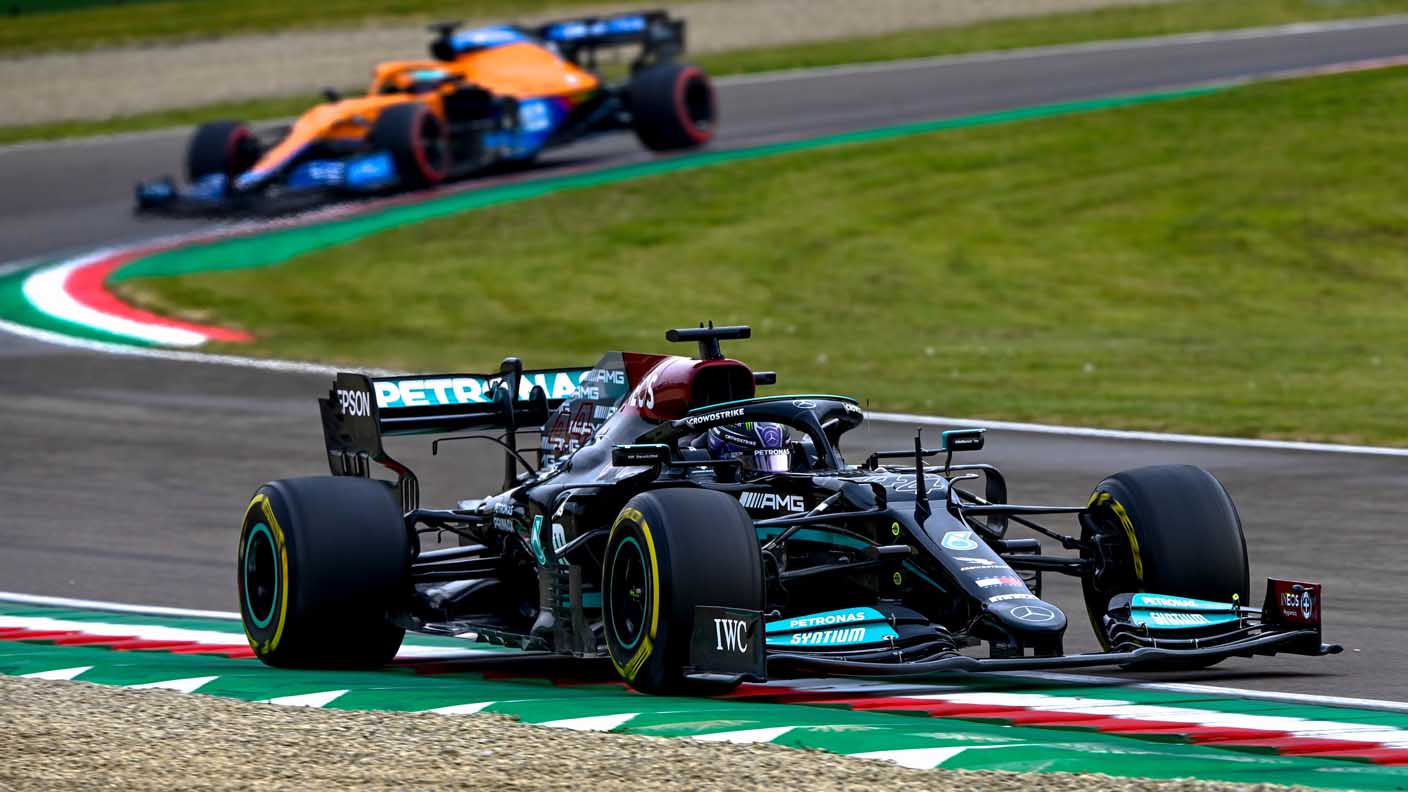 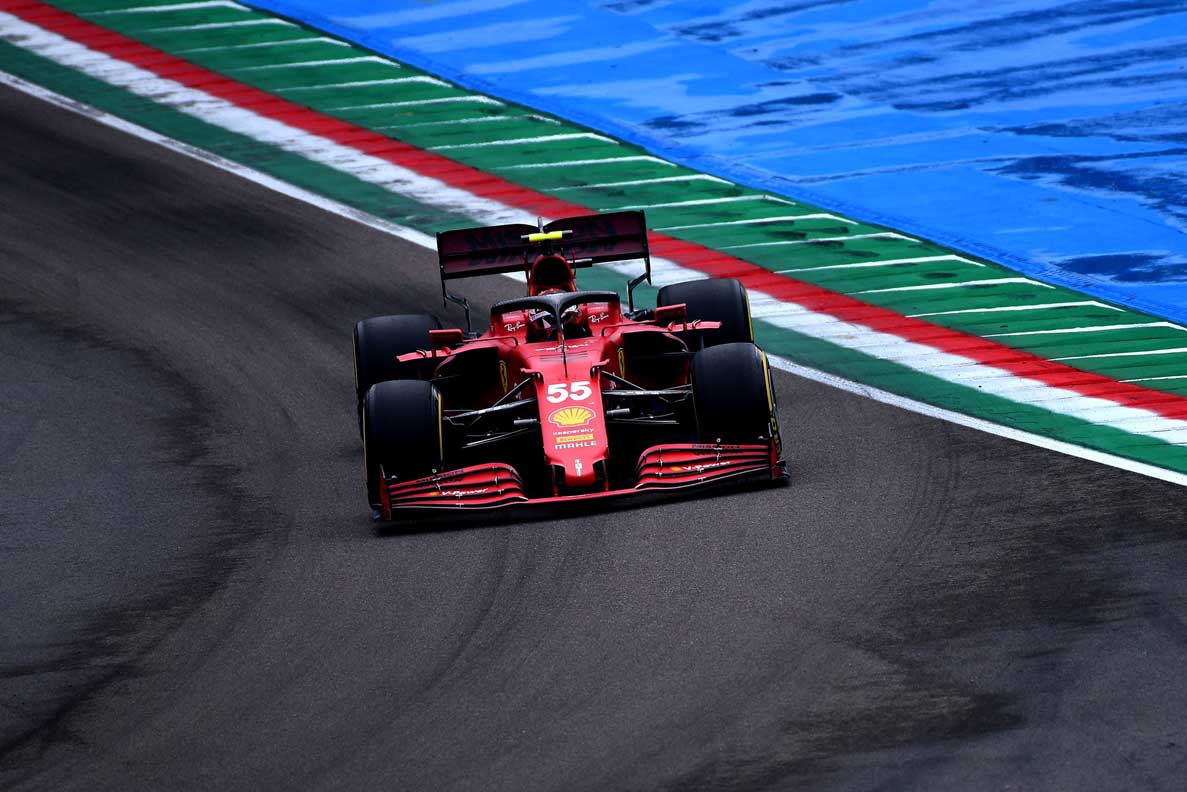