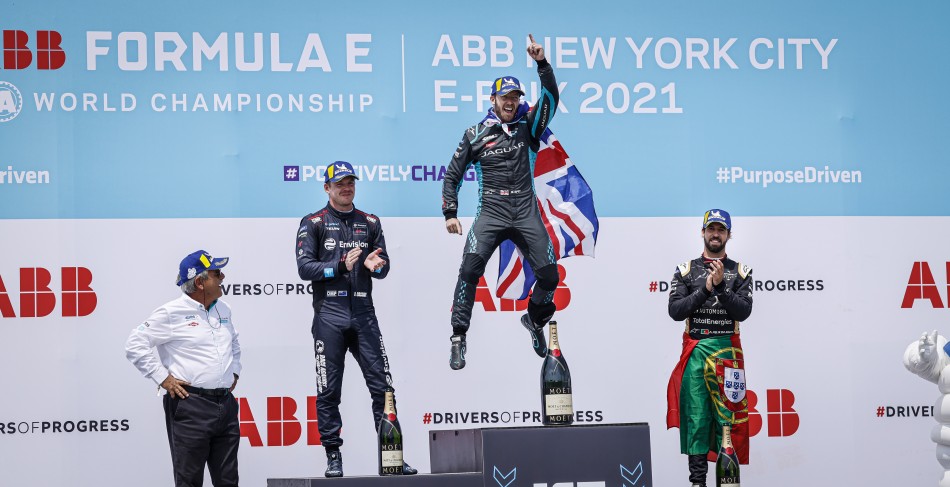 Sam Bird said he thought his title bid was over after what he described as a ‘horror show’ of a weekend in Mexico last month, but a third triumph in New York today (11 July) has vaulted the Jaguar Racing driver from 13th in the points at the start of the race into the ABB FIA Formula E World Championship lead.

Bird was one of the undisputed stars of Saturday’s opening leg in the ‘Big Apple’, as he scythed spectacularly through the field from 20th on the grid to ninth at the chequered flag, but from pole position in today’s contest, the Briton didn’t have to work quite so hard.

For the second time in his career, he executed a lights-to-flag victory in Brooklyn’s Red Hook district with a faultless performance that has firmly reignited his challenge for the crown, and Bird will enter the next event – a home soil double-header in London – holding a five-point advantage at the summit of the standings.

For much of the race, it looked like Jaguar was set for a one-two finish as Mitch Evans in the sister car closely shadowed his team-mate, but in the latter stages, the New Zealander found himself under increasing pressure from Nick Cassidy (Envision Virgin Racing), reigning Formula E champion António Félix da Costa (DS TECHEETAH) and TAG Heuer Porsche pairing Pascal Wehrlein and André Lotterer.

Following a dogged defence, a small mistake with just a couple of minutes remaining saw the left-rear corner of Evans’ Jaguar step out of line and kiss the wall of the Brooklyn Street Circuit at Turn Four – in a near carbon-copy of the error that had arguably cost the 27-year-old the top spot in qualifying.

Cassidy and da Costa were quick to pounce, and as it soon became evident that Evans’ car was wounded, the Porches similarly swept past. The Jaguar eventually limped across the finish line in 13th place.

Cassidy’s runner-up result – his second podium from the last three E-Prixs – consolidated his status as Formula E’s form driver heading into the final two race weekends and has elevated the rookie to fifth in the overall classification.

Despite trying every which way to prise the door open, da Costa ultimately had to settle for third, although fastest lap earned the Portuguese ace an extra point towards his title defence and he will travel to London as Bird’s closest pursuer after another committed performance in the North American metropolis.

Having been outmanoeuvred by their DS TECHEETAH rival when deploying their second Attack Mode, Wehrlein and Lotterer wound up fourth and fifth, with the latter pulling off a number of gritty overtakes as the top five finished almost ten seconds clear of the chasing pack.

Alexander Sims took a strong sixth place for Mahindra Racing, ahead of ROKiT Venturi Racing’s Norman Nato, although the Frenchman’s team-mate Edoardo Mortara – who began the day atop the title table – spun into the wall following contact with Jake Dennis (BMW i Andretti Motorsport), leaving him a frustrated 17th in the final reckoning.

Robin Frijns kept his own championship hopes very much alive with a charging drive from 21st to eighth for Envision Virgin Racing, with Alex Lynn making it a double score for Mahindra in ninth and yesterday’s winner Maximilian Günther (BMW i Andretti Motorsport) gaining 13 spots to snare the last point on offer in tenth.

Following a bright start that saw him run fourth for a while, Sérgio Sette Câmara faded to 11th for Dragon / Penske Autosport, and there was little joy for three former champions in the field. Jean-Éric Vergne did not even make it off the starting grid – bringing out an early safety car to enable the DS TECHEETAH to be removed – while a coming-together between Lucas Di Grassi (Audi Sport ABT Schaeffler) and Sébastien Buemi (Nissan e.dams) earned the Brazilian a ten-second penalty.