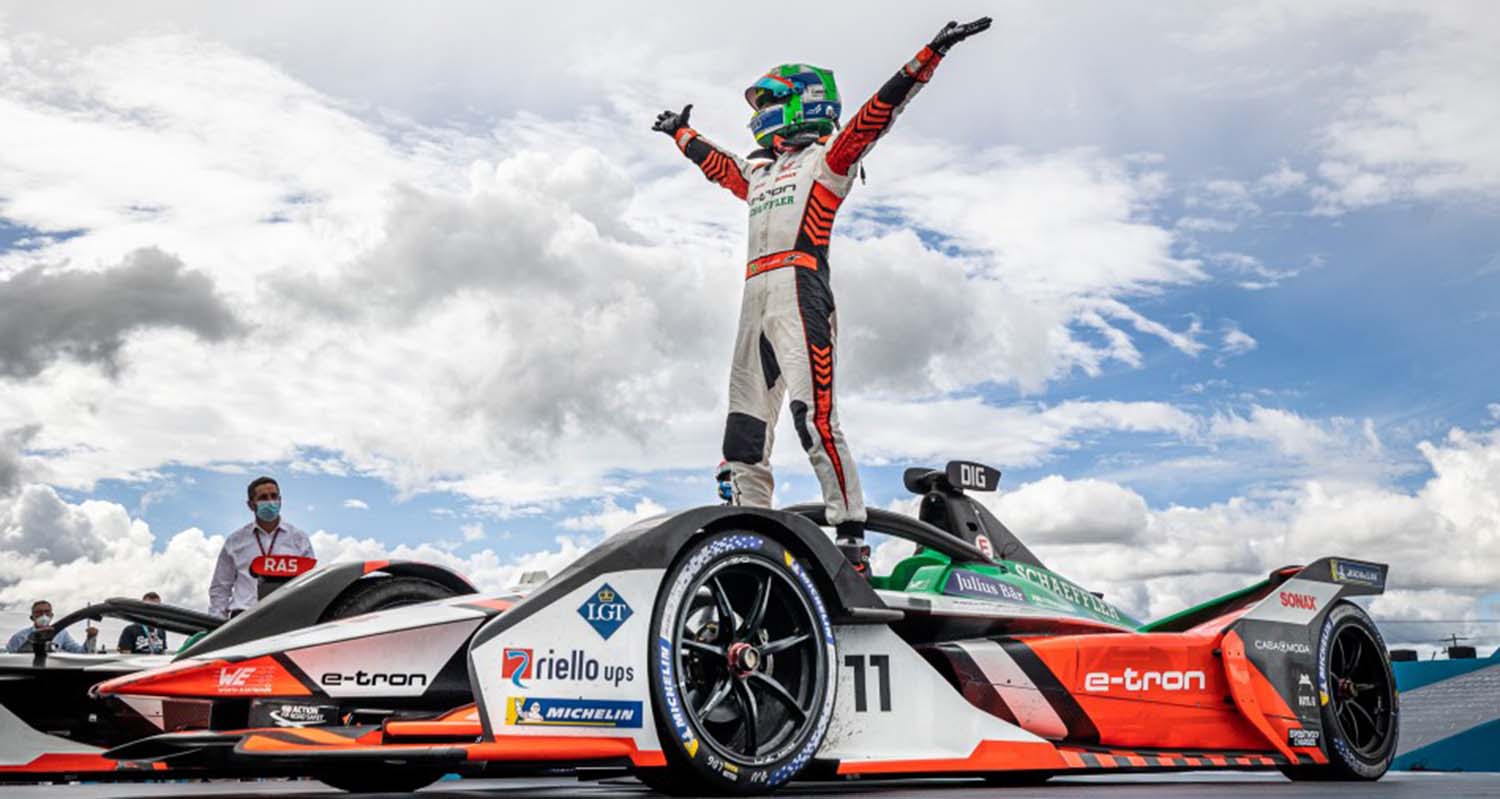 Lucas Di Grassi benefitted from a disqualification for race-long pace-setter Pascal Wehrlein to win the inaugural Puebla E-Prix today (19 June), with the Brazilian continuing his rich record of success in Mexico as Audi Sport ABT Schaeffler hit its ABB FIA Formula E World Championship competitors with the old one-two.

From pole position – the second of his Formula E career, both achieved in Mexico – Wehrlein (TAG Heuer Porsche) artfully managed two safety car interventions to lead almost the entire race around the Autódromo Miguel E. Abed, hosting the all-electric single-seater series for the first time this weekend. But Wehrlein and Porsche team-mate André Lotterer were disqualified for a technical infraction, due to the team failing to declare its tyres. That elevated Di Grassi to the top step of the podium following a fighting drive, with the result representing the 2016/17 champion’s first victory in more than 20 races.

From eighth on the grid, the Audi ace showcased his well-honed racecraft with a vintage performance to battle his way past his rivals. Textbook passes on Maximilian Günther (BMW i Andretti Motorsport) and Edoardo Mortara (ROKiT Venturi Racing) in particular set Di Grassi up for his 11th career Formula E triumph, making him the seventh different winner in eight rounds as the pulsating 2020/21 campaign reached its midway stage.

The 36-year-old was followed closely across the finish line by team-mate René Rast, who used his energy wisely to similarly rise up the order from ninth on the grid, posting fastest lap in top 10 along the way. Audi has invariably excelled in Mexico, and the move to a new track this season did nothing to change that.

After featuring up towards the sharp end throughout, Mortara hung on to ascend the final step on the podium – the ever-spectacular Swiss star’s second rostrum appearance of the campaign – with Alexander Sims winding up fourth for Mahindra Racing. The Briton’s result was all the more remarkable given that he missed the majority of free practice.

Having looked odds-on for a podium for much of the race, Jake Dennis (BMW i Andretti Motorsport) ultimately faded to fifth after the timing of his Attack Modes failed to pay off. Despite a late lock-up that cost him some ground, defending champion António Félix da Costa tracked Dennis across the line in sixth position for DS TECHEETAH, with Mercedes EQ’s Stoffel Vandoorne scything through the field from virtually the back of the grid to finish seventh, in so doing keeping his own title bid very much alive.

Last year’s Mexico winner Mitch Evans placed eighth for Jaguar Racing this time around, but stablemate Sam Bird would not reach the end after being eliminated in a coming-together with Mahindra Racing’s Alex Lynn.

Nyck de Vries (Mercedes EQ) snuck into the points-paying positions in ninth, although the Dutchman might feasibly have hoped for better had he not been sent off-track when he was tagged by countryman Robin Frijns at Turn 11. The Envision Virgin Racing driver picked up a ten-second penalty for causing the collision, dropping him to a lowly 16th overall, but he nonetheless narrowly retained his championship lead. The top ten scorers were completed by Lynn.

Having run second to Wehrlein for most of the E-Prix, Günther ultimately slipped back to 12th in a disappointing outcome for BMW i Andretti Motorsport, while Oliver Rowland’s race unravelled before it had even begun, with the Nissan e.dams man lacking any radio communication with his team and struggling to get away from his front row grid slot.

Two-time title-winner Jean-Éric Vergne, finally, was in the mix for a rostrum result until he found himself eliminated in an Attack Mode merge collision with Sims 20 minutes in, dashing the DS TECHEETAH driver’s hopes of a strong finish.

The Frenchman and his 23 Formula E rivals, however, all have another opportunity to shine in just 24 hours, with the second Puebla E-Prix set to get underway at 16:00 local time (21:00 GMT) on Sunday, 20 June.