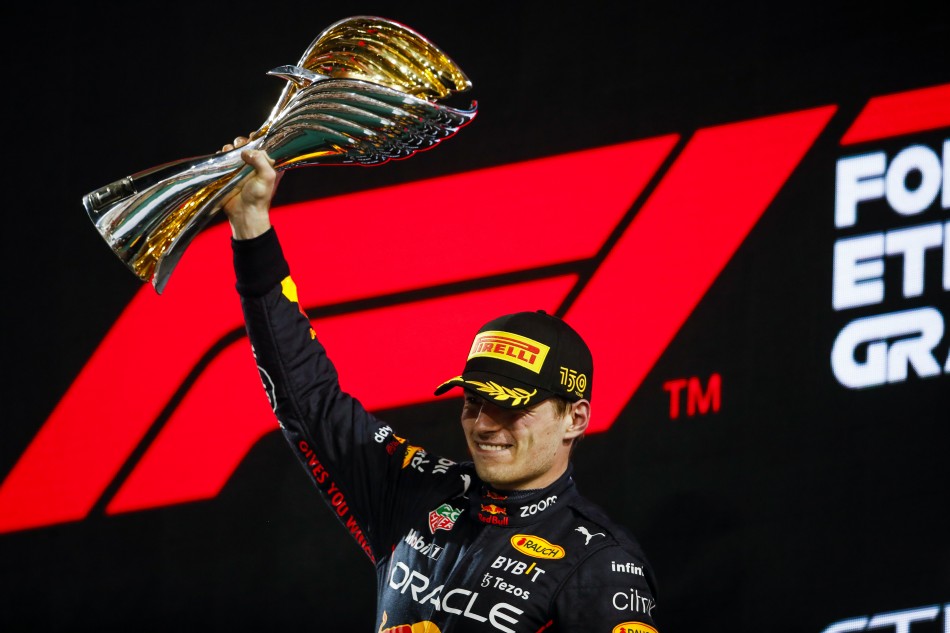 After leading away from pole position, Verstappen was headed for just a single lap during the 58-lap race, with Leclerc briefly in the lead as the double champion made his sole pit stop of the race. With Verstappen in complete control, the focus turned to the battle between Pérez and Leclerc for the runners-up spot in the Drivers’ standings.

And in the opening stages of the race, Pérez appeared well-placed to take P2 in the race and the championship bragging rights.

Starting alongside Verstappen on the front row, Pérez got away well to slot in behind his team-mate and in the opening stint the Red Bull pair began to pull away from the pack. By lap 10 Verstappen was 2.6s ahead of his team-mate and Pérez had almost three-seconds in hand over third-place Leclerc.

Pérez was the first of the frontrunners to stop and he made his way towards the pit lane on lap 16. He switched to Hard compound tyres in 2.4s and after dismissing Alpine’s Fernando Alono’s Alpine and Aston Martin’s Sebastian Vettel he climbed to fifth place and then rose to third as Ferrari’s Carlos Sainz and Mercedes’ Lewis Hamilton pitted.

Verstappen then made his sole pit stop, for Hard tyres, on lap 21 and Leclerc took the lead for a single lap. The Ferrari driver then made his first pit stop and Verstappen and Pérez resumed control the race.

However, as the second stint evolved, Leclerc gradually began to edge closer to Pérez and on lap 30 the Ferrari driver was just 2.2s behind the Mexican racer. Red Bull then chose to pit Pérez on lap 34 and soon after rejoining he found himself in fourth behind Hamilton. He was now 18 seconds back from one-stopping Leclerc who was now second.

The Mexican chased down the Mercedes driver but lost time in passing Hamilton and with 10 laps to go he was 10 seconds behind the Monegasque driver.

With five laps left Checo had narrowed the gap to just over four seconds and ahead of the final lap he closed to within two seconds of the Ferrari. But the Ferrari driver’s tyres were just holding on and though Checo pushed all the way to the flag he ran out of time and laps to mount an attack and second place in the Championship ebbed away.

At the front, Verestappen took a record-breaking 15th win of the season with almost nine seconds in hand over Lelerc. The Ferrari driver’s second place, just 1.3 second ahead of the hard-charging Checo sealed P2 in the standings, three points ahead of the Red Bull driver who claimed his 11th podium finish of the season.

Behind them, Carlos Sainz took fourth place for Ferrari after Hamilton was forced to retire his Mercedes with a suspected hydraulics failure late in the race. Georhe Russell, in the second Mercedes, finished fifth, while McLaren’s Lando Norris fought off a late charge by Alpine’s Esteban Ocon to seal sixth by 1.0s.

Aston Martin’s Lance Stroll finished eighth, while Daniel Ricciardo closed out his McLaren career with two points for ninth place. The final point on offer went to Sebastian Vettel. The German was competing in his 299th and final grand prix.

“I feel a bit empty, to be honest, it’s been a big weekend,” said the four-time champion afterwards. “But I can only repeat, you know: I think the last two years have been very, maybe disappointing from a sporting point of view, but very, very useful and important to me in my life, a lot of things happened.

“I think it’s a huge privilege being in the position that we are in and with that comes some responsibility,” he added. “So I hope to pass on a little bit to the other drivers to carry on some of the good work. It’s great to see that, you know, we have the power to inspire with what we do and what we say. I think there are far bigger and far more important things than racing in circles, but obviously it’s what we love and through that if we can transfer some of the really important values that’s big. So thank you for the support. Thank you for the messages, the letters and all the love in general. So yeah, I will miss that. But it’s been an absolute joy throughout my career, so thank you.”