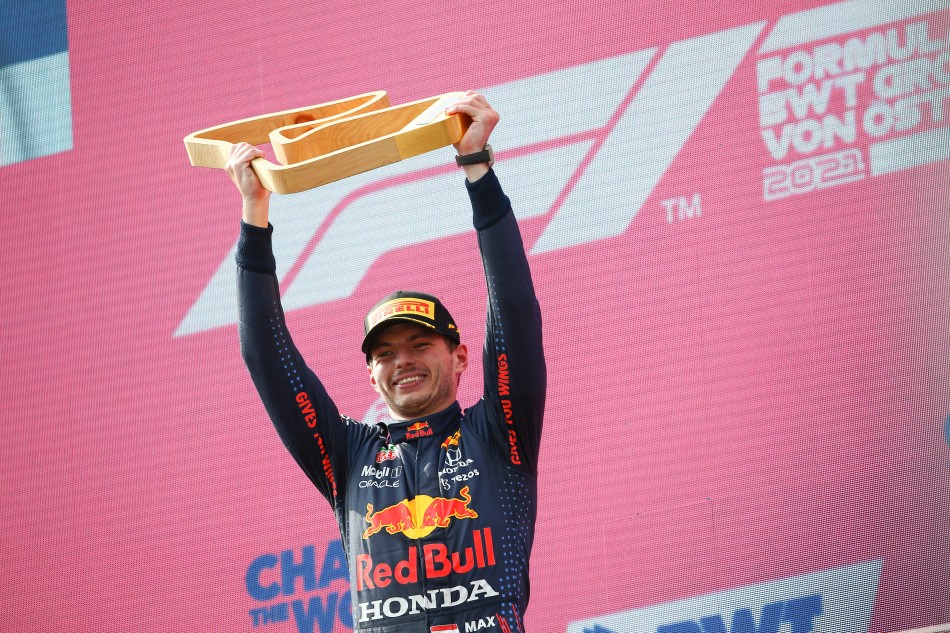 Max Verstappen scored the first grand slam of his career thanks to a dominant Austrian Grand Prix win that saw the Red Bull driver lead every one of the 71 laps of the Red Bull from pole position to take victory and take the extra point on offer for fastest lap.

The race was soon neutralised, however. Alpine’s Esteban Ocon was hit by the Alfa Romeo of Antonio Giovinazzi and the Frenchman pulled over off track on the run down to Turn 4. The Safety Car was immediately deployed.

When racing resumed at the start of lap four, Pérez piled pressure on Norris and attacked as they went down to Turn 4. The Mexican tried a bold move around the outside of the McLaren but as Norris held his line, Pérez was forced off into the gravel and he dropped to P10 behind the second McLaren of Daniel Ricciardo.

The soft tyre starters then began to pit. That boosted Pérez back up the order and on lap 20 he found himself in seventh place behind Charles Leclerc and within DRS range of the Ferrari. At the front, Max was 8.6s ahead of Norris but then the McLaren driver was hit with a five-second penalty for causing the earlier collision with Pérez. His pain was increased when moments later he was passed by Hamilton.

The Mercedes driver’s move past Norris made little immediate impact on Verstappen’s advantage at the front, however, and by lap 24 the Red Bull driver was 10.2 seconds clear of his title rival.

Norris and Bottas then sparked the main round of pit stops for the leaders on lap 31 and during his stop Norris served his five-second penalty. That allowed Bottas to exit the pit lane ahead of him, in third place.

Hamilton was the next to make a pit stop, on lap 32, with Verstappen following a lap later and when the order shook out Max found himself more than 13 seconds ahead of the Mercedes driver.

Pérez made his first stop on lap 34, attempting to undercut Leclerc, and despite a slow stop caused by a problem with his front left wheel, the Red Bull driver leapfrogged the Ferrari driver pitted when he pitted on lap 35.

On lap 41 Leclerc attacked Pérez in Turn 4, and the Ferrari and the Red Bull made contact. Leclerc went off track and rejoined and Pérez was handed a five-second time penalty for forcing another driver off track.

The battle between the two flared again on lap 46. Leclerc once again got into DRS range and attacked into Turn 4. This time the battle continued through the following corner, but in Turn 6 Pérez held a wide line and Leclerc was forced off track a second time. The Mexican soon received a second five-second penalty.

Hamilton now began to report that he was struggling with damage to his Mercedes and with Norris once again looking competitive in P4, Mercedes opted to allow third-placed Bottas to pass his team-mate. Hamilton then fell back towards Norris and on lap 53 the young McLaren driver powered past the Mercedes man in Turn 6. With a sizeable gap behind him to Pérez Hamilton then pitted to take on another set of hard tyres.

Verstappen now had an almost 30-second advantage over Bottas and Red Bull pitted the Dutchman for another set of hard tyres. He emerged with over seven seconds in hand over Bottas and on lap 62 he then grabbed the fastest lap of the race and an extra point with a time of 1:06.200. From there it was a cruise to the flag and after 71 Verstappen grabbed his 15th career win.

Behind him Bottas took second, while Norris scored the fourth podium finish of his career. Hamilton had to settle for fourth ahead of Ferrari’s Carlos Sainz who managed to pass Leclerc and Ricciardo in the final few laps.

With two five-second penalties to take at the flag, Checo needed to eke out a 10-second advantage over the sixth-placed driver, but as Sainz rose through the order, Checo ended up missing out by just 0.7s and had to settle for sixth. With Ricciardo and Leclerc seventh and eighth respectively, ninth place went to Alpha Tauri’s Pierre Gasly. The final point on offer went to Alpine’s Fernando Alonso after he came out on top of an enthralling battle that denied Williams’ George Russell a first point of the season.