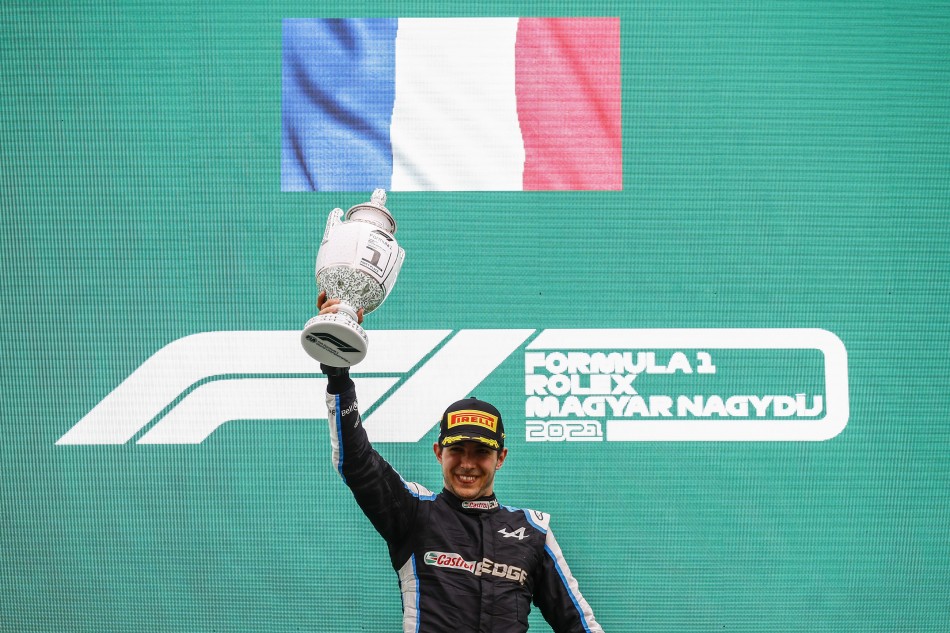 Alpine’s Esteban Ocon held of Aston Martin’s Sebastian Vettel to take a surprise maiden grand victory after collisions in turn one upset the order and brought out the red flags. Lewis Hamilton, meanwhile, fought back to third place after a tactical error at the restart left him in last place.

At the start, held in drizzly conditions and with the field on intermediate tyres, Mercedes’ Valtteri Bottas made a poor getaway from P2 on the grid and was passed by third-place starter Max Verstappen, the second Red Bull of Sergio Pérez and by McLaren’s Lando Norris, who moved in front of the Mercedes driver.

Bottas attempted to recover but when Norris appeared to brake slightly early to avoid trouble in Turn 1, the Finn driver locked up and ploughed into the back of the Englishman’s car. Norris cannoned into the side of Max’s RB16B with the championship leader’s car sustaining heavy damage to the floor. Bottas, meanwhile, bounced through the corner and collided with Pérez.

Seeing the incident unfolding, Lance Stroll tried to move to an inside line for Turn 1 but Charles Leclerc was already turning and the Aston Martin driver made heavy contact with the Ferrari driver who exited the race. The Safety Car was quickly deployed.

Verstappen and Pérez were initially able to continue but midway thorugh the lap Pérez pulled over and retired from the race. Verstappen limped back to the pits for visual checks but as he rejoined his right bargeboard detached and with debris in the pit exit and scattered across Turn 1 the red flags were displayed.

In the pit lane pole position man Lewis Hamilton held P1 for Mercedes ahead of Ocon and Vettel. Ferrari’s Carlos Sainz was fourth ahead of AlphaTauri’s Yuki Tsunoda and Williams’ Niocholas Latifi was sixth. Alpine’s Fernando Alonso sat in seventh place ahead of Williams’ George Russell, the Alfa Romeo of Kimi Räikkönen and the Haas of Mick Schumacher, while ahead of the wounded RB16B of Verstappen at the restart would be AlphaTauri’s Pierre Gasly and McLaren’s Daniel Ricciardo.

Race control informed the teams that a standing start would take place and the cars were led out of the pit lane by the safety car. The entire field went out for the formation lap on intermediate tyres but with the sun now rapidly drying the track it quickly became clear to all but Hamilton that slicks would be required. The race leader made his way to the front of the grid but behind him the entire field pitted to take on slicks. Hamilton was left alone on the grid to restart the race on his own.

As Hamilton powered away towards Turn 1, the rest of the order then filed out of the pit lane and took up position behind him. Mercedes immediately told Hamilton to pit at the end of the lap and Ocon soon took up the race lead ahead of Vettel and Latifi.

Hamilton dropped to P14 and last as Verstappen made his way to P11 but as Ocon and Vettel pulled away from the pack, the championship leaders struggled to get past rivals at the back of the field.

Red Bull then pitted Verstappen for hard tyres, but with the Dutchman struggling for pace in his damaged car the undercut worked for Mercedes and Hamilton swept past as the Dutchman exited the pit lane.

Verstappen was now in 12th place just behind McLaren’s Daniel Ricciardo. But even though the Red Bull driver could get inside DRS range of the McLaren, the Australian was getting a similar boost from George Russell ahead and the champion leader found himself stuck at the tail of a train of cars.

Ahead, Hamilton continued his march forward and by lap 35 he was in fifth place behind Alonso, who needed to make another pit stop. The Spaniard briefly took the race lead when Vettel and Ocon took on fresh tyres, with Ocon holding the advantage, but a lap later Alonso made his stop and Hamilton swept past to claim fourth place behind Sainz. The Briton was struggling for grip on his hard tyres, however and Mercedes opted to pit him for new mediums and a renewed assault.

Further back, Verstappen pitted to find a way out of the train and after taking on new medium tyres began to attack the cars ahead.

Hamilton then began to reel in the top four and on lap 54 he was just 1.8s behind Alonso. Verstappen, meanwhile, has made his way past Räikkönen and was up to P11 and closed in on Ricciardo eventually getting past the Australian with 10 laps to go to secure P10 and a single point.

Alonso’s defence against Hamilton eventually expired at the start of lap 65. The Alpine driver had a momentary lock up into Turn 1 and Hamilton pounced to steal P4 on the run down to Turn 2. The Mercedes driver quickly closed on Sainz and at the start of lap 67 he powered past the Ferrari to take third place.

And there the odder solidified. Vettel could find no way to mount an attack on Ocon and though Hamilton pressed hard to reel in the Aston Martin driver he couldn’t close the gap and after 70 laps Ocon crossed the line to take a memorable first grand prix win ahead of Vettel and Hamilton.

Fourth place went to Sainz, with Alonso a brave fifth ahead of Pierre Gasly, who took the point for fastest lap. Seventh place went to Yuki Tsunoda, while Williams celebrated their first points in two years thanks to Nicholas Latifi and George Russell’s finishing eighth and ninth respectively.

Verstappen now goes into the break in P2 in the Drivers’ standings. Hamilton now leads on 192 points with Max six points behind. The team is now P2 in the Constructors’ 10 points behind Mercedes.