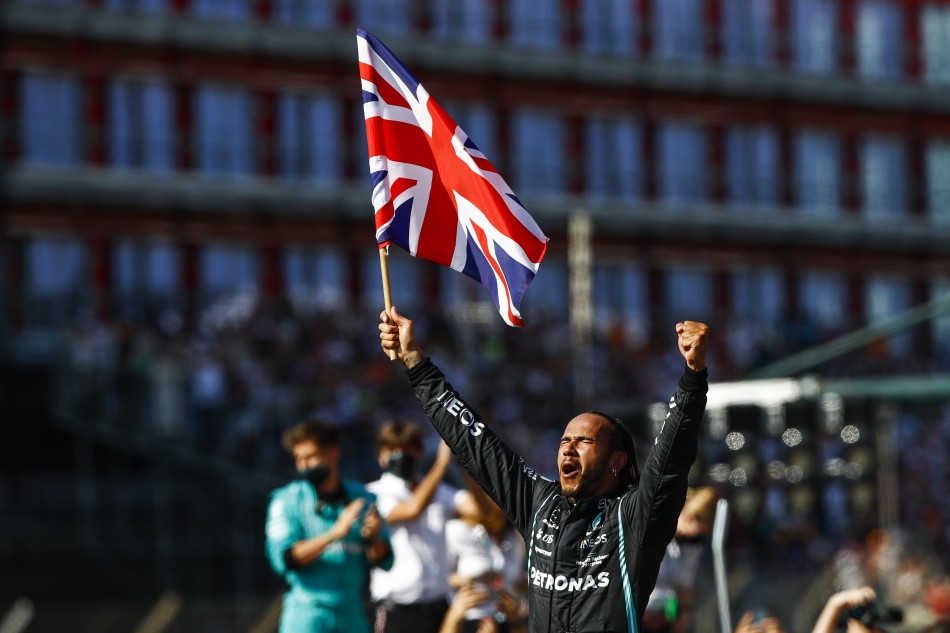 Lewis Hamilton overcame a penalty for causing a lap one collision with Max Verstappen that ended the Red Bull driver’s race to take an eighth British Grand Prix win ahead of Ferrari’s Charles Leclerc and Mercedes team-mate Valtteri Bottas.

Verstappen started the race from pole position and at the start the Dutchman made a good getaway to take the lead as the field streamed through the first corner. Hamilton, though, was quickly on the attack and though Verstappen resisted, the Mercedes driver attacked once again on the high-speed run to Copse. He went down the inside of the Red Bull and as Verstappen turned in the Mercedes clipped the right-rear wheel of the Dutchman’s car.

Verstappen was sent off track at high speed and he hit the tyre barriers hard, severely damaging his car. Fortunately, Verstappen was able to climb out of his wrecked car and was taken to the medical centre and later to a nearby hospital for precautionary checks.

With the tyre barrier severely damaged the race was soon red flagged and the race stewards quickly placed the incident under investigation.

Under the red flag, Ferrari’s Charles Leclerc was in first place, the Ferrari driver having passed Hamilton on track in the immediate aftermath of the lap one incident. And after a 35-minute stoppage the cars formed up on the grid once again.

When the lights went out, Leclerc made a good getaway from pole position to take the lead ahead of Hamilton, with Mercedes’ Valtteri Bottas third ahead of McLaren’s Lando Norris.

At the back, Sergio Pérez took the restart from 19th place on the grid but he was quickly on the march and within a handful of laps he had climbed to 12th-place and was chasing down AlphaTauri’s Pierre Gasly, though his progress was halted as he joined a DRS train containing 10th-placed Kimi Räikkönen and 11th-placed Pierre Gasly.

At the front, meanwhile, Hamilton was handed with a 10-second time penalty by the race stewards. Leclerc was now experiencing difficulties with his engine and that gave Hamilton hope that he might attack for the lead but the Ferrari driver managed to solve the issues with the aid of his pit wall.

Hamilton then made his way to the pit lane on lap 28. He served his time penalty and then switched to a set of hard tyres and rejoined in fifth place. Leclerc made his stop soon after and he was able to resume in the lead.

Further back, as the pit stops played out, Pérez rose to ninth but once again in a train of cars he was unable to salvage anything better for Red Bull. The result was that Sergio pitted again on lap 39 for another set of mediums and dropped back to P17.

At the front, Hamilton had overcome his penalty with relative ease and he was pushing to catch Leclerc. The Monegasque driver resisted as hard as he could but with two laps remaining Hamilton, armed with fresher tyres and more pace, powered past to claim the lead and then the race win.

With Hamilton holding fastest and the point associated with it, the gap to Verstappen in the Driver’s standings would have been narrowed to just seven points. Red Bull therefor sacrificed Pérez’s hopes of clawing his way back to the points and pitted the Mexican for

soft tyres. And in the closing moments he grabbed the fastest lap of the race to deny Hamilton and Mercedes.

Behind Hamilton and Leclerc, Bottas took third place ahead of Norris, with Daniel Ricciardo fifth in the second McLaren. Carlos Sainz fought back from a slow pit stop to finish sixth in the second Ferrari, while Fernando Alonso took seventh place for Alpine. Lance Stroll finished eighth for Aston Martin ahead of Esteban Ocon and the final point was taken by AlphaTauri’s Yuki Tsunoda.