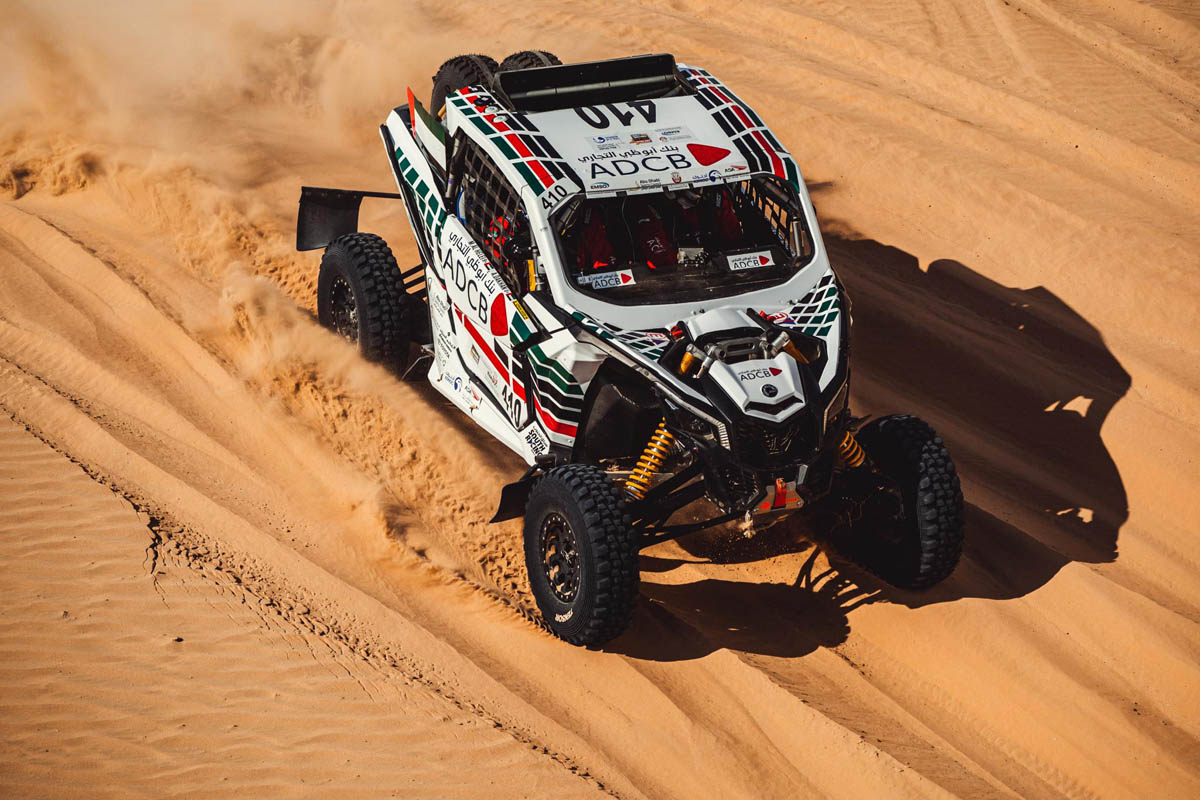 South Racing-built machines filled all the podium places in the T4 section on the penultimate round of the FIA World Cup for Cross-Country Rallies and finished first, third and fifth in the FIA T3 category.

Jones and Brazilian navigator Gustavo Gugelmin suffered a little from road position on the first days of the event through the remote deserts of the UAE’s Empty Quarter but managed their pace well when it mattered and carved out a winning advantage of 11min 38sec with second place on the final stage. They also finished in a stunning sixth place in the general classification behind five more powerful T1 cars.

Marek Goczal and Lukasz Laskawiec led for large parts of the race and were just over a minute adrift of Jones heading into the last stage. The sixth quickest time on the final day pushed them out of contention for the win in the Energylandia Rally Team Can-Am, but they finished second overall.

The fastest time on the final stage and problems in the dunes for Dutchman Kees Koolen and his co-driver Mirjam Pol enabled the Monster Energy Can-Am Team crew of Aron Domzala and Maciej Marton to round off the podium places. Koolen got stuck in the soft sand and dropped from third to an eventual sixth place.

The Italian crew of Eugenio Amos and Paulo Ceci won the fourth stage and reached the finish in fifth place, with Michal Goczal and Szymon Gospodarczyk finishing seventh in the second of the Energylandia Rally Team-backed Can-Ams.

Brazil’s Rodrigo de Oliveira Luppi teamed up with Maykel Justo to finish eighth. “This was a big experience for Rodrigo, good training for Dakar and only his third time in the dunes. It was also my first time in Abu Dhabi,” said Justo. “It was so difficult for us. We broke the drive shaft on day one and the gear arm on day two and lost around 15 minutes to change it.”

Australia’s Molly Taylor and Dale Moscatt came home in ninth and South Racing Middle East’s Thomas Bell teamed up with Bruno Jacomy to finish 10th after surviving a roll in the dunes early in the rally.

South Racing Can-Ams were third and fifth, with Spaniard Fernando Alvarez teaming up with Frenchman Xavier Panseri in third and Sweden’s Sebastien Eriksson finishing fifth with Spain’s Oriol Mena. The Russian duo of Pavel Lebedev and Kirill Shubin led for part of the race before suffering engine issues. Dropped scores mean that Alvarez will not be able to win the title at the final round in Saudi Arabia next month.

South Racing Can-Am Team’s Scott Abraham said: “This was a great result for the South Racing brand, as well as our South Racing Middle East structure, taking wins in both the T4 and T3 categories and, at the same time, winning the T4 World Cup with Austin Jones after a hard-fought year. This was to add to the T4 Teams’ World Championship and the superb performances we also showed in the FIA Baja series this season.

“The Can-Am Maverick showed yet again that it is the best performing side-by-side vehicle in the business. It was a great overall result and performance for the whole team on one of the most demanding rallies in the world calendar.”

Marek Goczal carved out a T4 lead of 54 seconds over local driver Mansour Al-Helai through the opening selective section of 265.04km between Abu Dhabi and the bivouac at Qasr Al-Sarab. Series leader Jones came home in third place and Amos and Michal Goczal rounded off the top five on a stage where all 11 T4 runners finished without major issues.

“The dunes here are scary,” admitted Jones. “There are a lot of drop-offs and a lot of weird things that you have to deal with. You can never relax. You always have to be on the wheel watching. It’s so hard here. It doesn’t feel super hot but when you are in the car it is burning.”

Alvarez started well in T3 to lead the category by 13 seconds from South Racing Middle East’s Al-Saif and Lebedev. Series leader Gutierrez was fourth. “We had a clean stage and no problems,” said Alvarez. “We didn’t take any risks and we won the stage in our category.”

Jones surged into the outright T4 lead with the fastest time on the second loop stage of 318.02km through the dunes and across the gatch roads of the Rub Al-Khali.

The American won the test by 2min 26sec to gain a lead of 2min 22sec over Marek Goczal. Amos, Al-Helai and Koolen rounded off the top five in the overall standings, but Bell hit trouble on the stage after rolling in the dunes. He was soon joined by Germany’s Annett Fischer, who crashed her Can-Am heavily in the same place.

A broken drive shaft after 100km of the stage also cost Michal Goczal dearly, although team-mate Rodrigo Luppi was on hand to help to extricate the Can-Am from the soft sand. 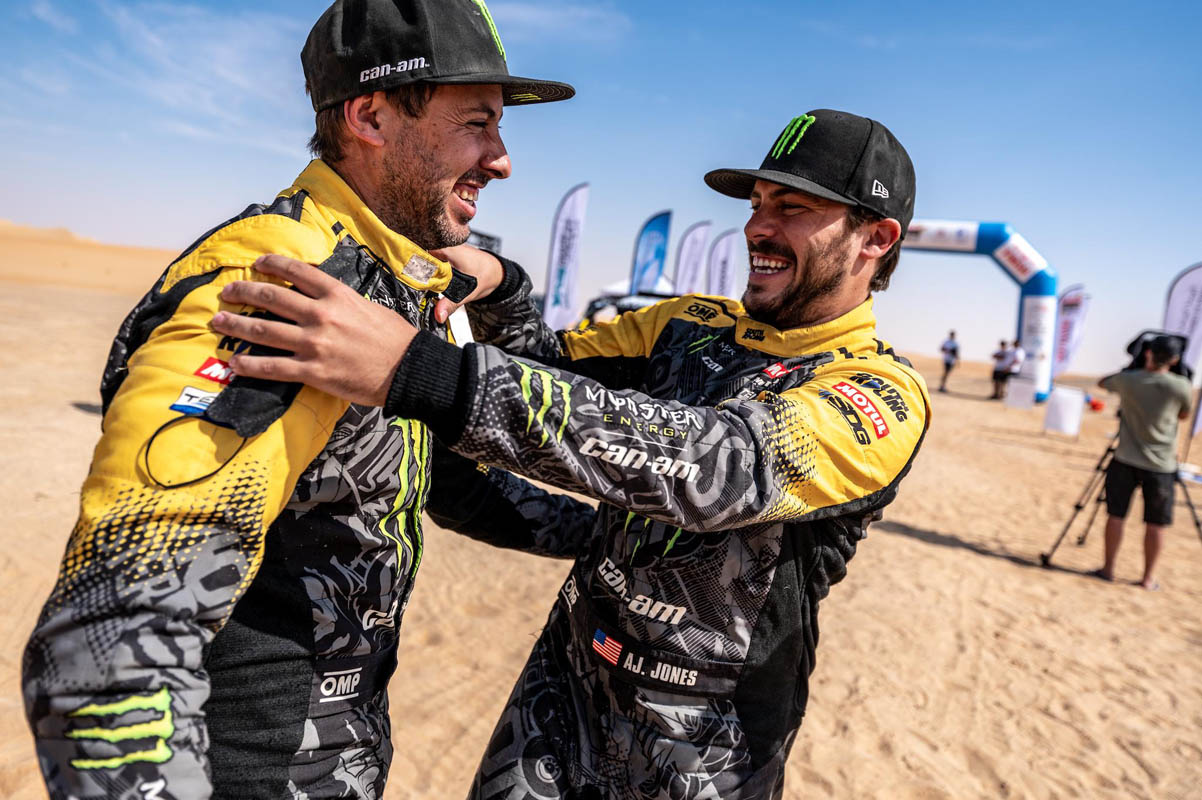 “We had a really good day,” said Jones. “We kept a good pace but we had a little bit of a problem about 10km from the finish. We had to take it down a couple of notches but we had a good day.”

“It was a very long day and the first part of the stage was with big dunes,” said Amos. “Half an hour before the refuelling I lost a bit of concentration and we went slower. In the last section we went flat out. At one point we had 27km without a note…”

Lebedev won the T3 special to snatch a 4min 46sec lead from Al-Saif, as Alvarez slipped to fourth behind Gutierrez. Eriksson recovered well from first day electrical issues but had to stop and repair a wheel bearing and lost around an hour. “The dunes here are fantastic,” said the Swede. “It’s like a big playground for men!”

Marek Goczal claimed the T4 win on the third loop stage of 289.75km, the Pole beating Al-Helai by 2min 01sec to regain the lead from stage opener Jones and hold a stunning fifth in the general classification. The American came home in fifth behind Domzala and Koolen and dropped nearly six minutes to his Polish rival.

“Opening the road is hard,” admitted Jones. “We’ve opened up every day this race. It’s crazy. Everyone else is able to follow and gets a ride. It’s been tough for us to make up time. No problems and we ran at a good pace.”

“Every day you have to concentrate like crazy, because if you miss one drop down you can crash,” admitted Koolen. “I always drive in a disciplined way here. Days two, three and four are always in the dunes and very difficult. Very tiring days.”

Bell was back in the fray after his roll on day two, but time penalties had pushed him close to the foot of the T4 rankings.

Al-Saif claimed the T3 stage win, the Saudi beating Gutierrez by 11 seconds to snatch a miniscule two-second cushion over Lebedev in the rankings. Eriksson and Alvarez came home in fourth and fifth, with Alvarez breaking a drive shaft and getting stuck in a dune in two-wheel drive for a short time and incurring costly time penalties.

Amos won the fourth stage of 251.93km by 4min 02sec to hold sixth in the T4 standings and Jones moved to the top of the leader board with the third quickest time behind Michal Goczal. The Pole’s brother came home in sixth and trailed Jones by 61 seconds heading into the final day. Koolen, Domzala and Al-Helai were third, fourth and fifth overall.

Al-Saif won the T3 tussle from Alvarez and increased his advantage over Gutierrez to 1hr 01min 22sec, the Saudi’s victory bid strengthened when Lebedev hit engine trouble after driving with the oil light on for 50km.

Second place on the final stage behind Domzala enabled Jones to seal the title and the win in Abu Dhabi, but there was late disappointment for Koolen and his retirement lifted Domzala into third in T4 behind Marek Goczal. Al-Saif safely defended his massive lead to claim the T3 victory and Alvarez confirmed third place. 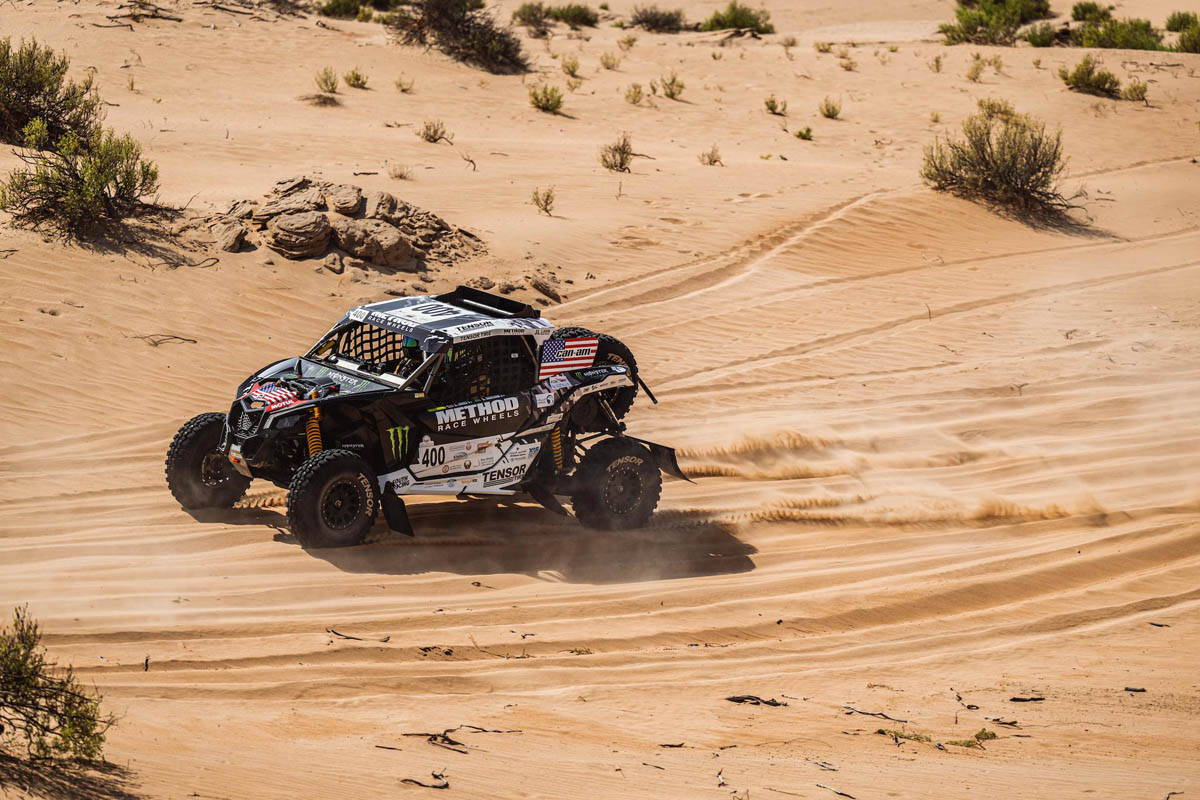 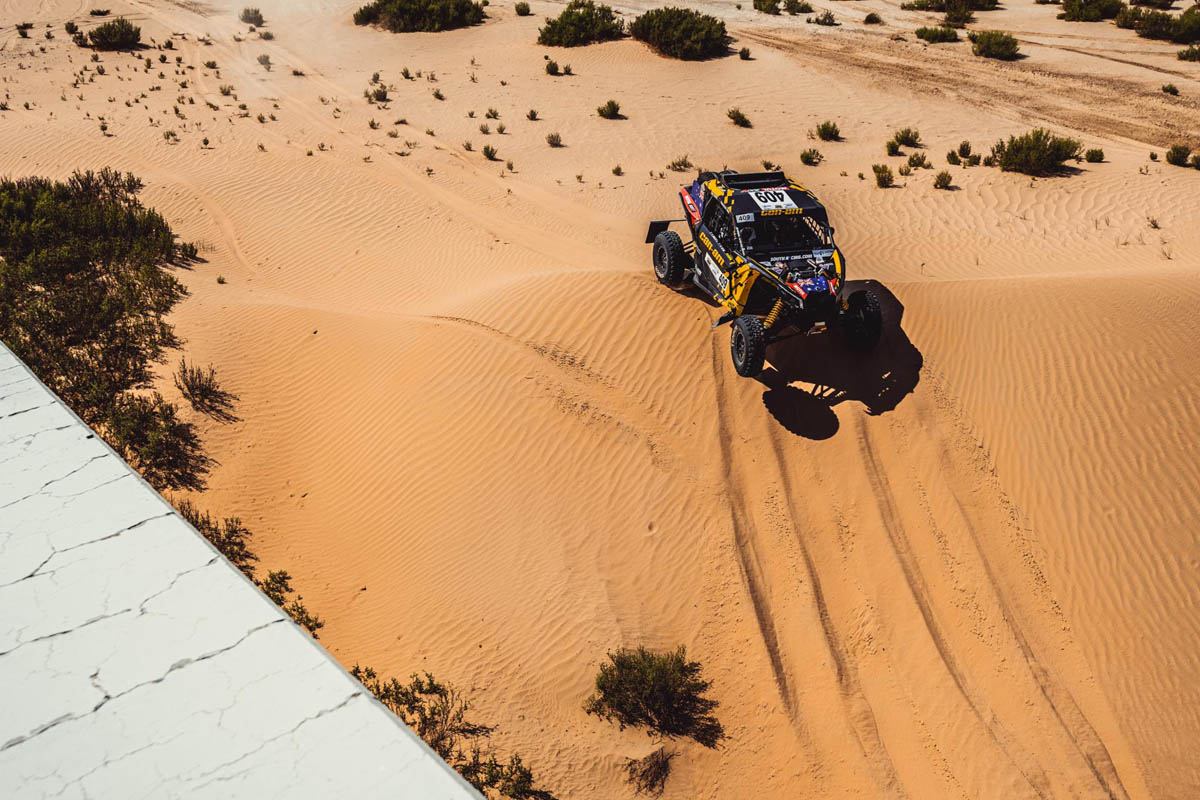 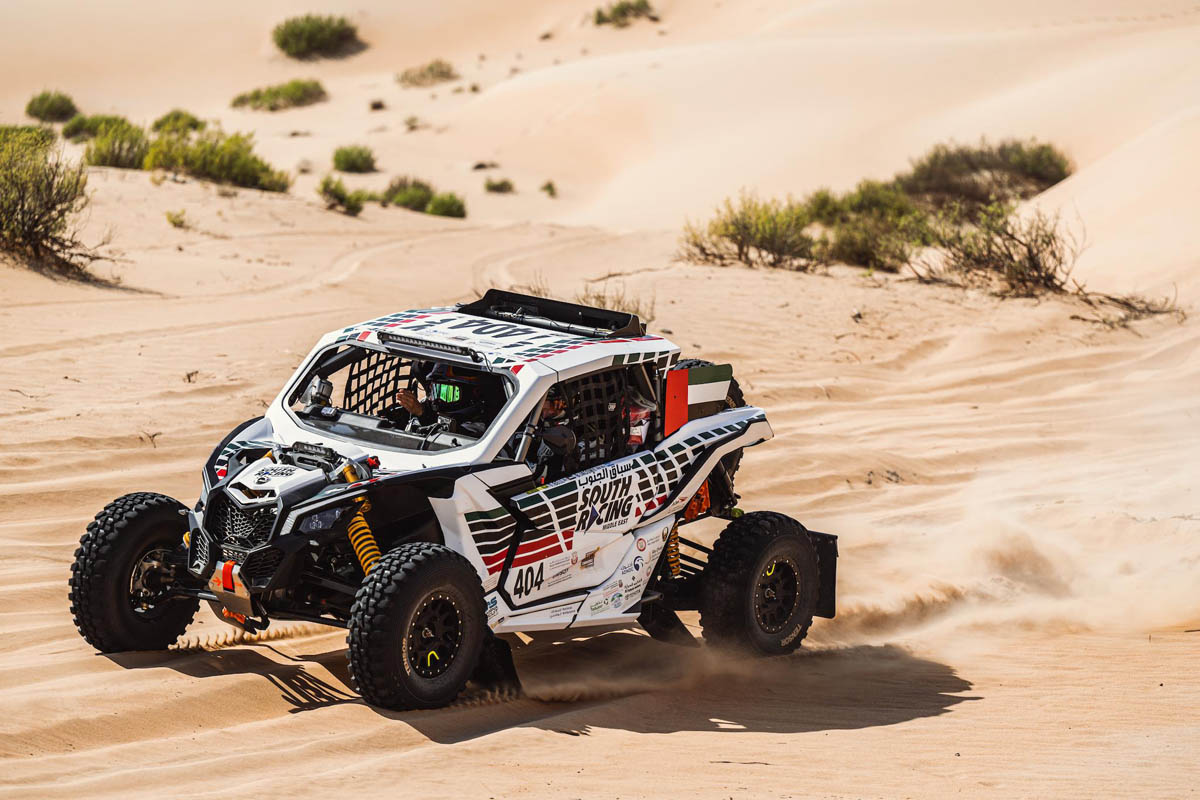