Audi Captures The Zeitgeist With This Car: First Audi 80 Unveiled 50 Years Ago 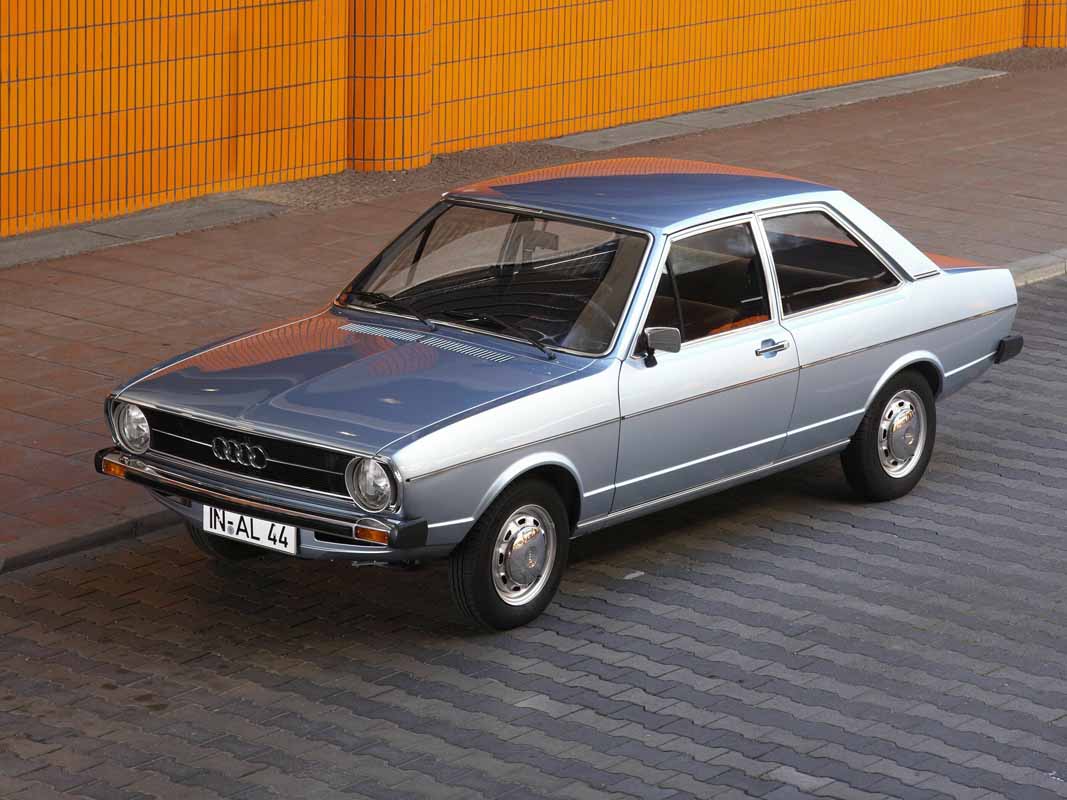 It establishes the B series, is both a pioneer of innovative technology and a trendsetter, and becomes the first million-seller for the brand with the four rings: the Audi 80. The significance of the compact sedan for Audi and the Volkswagen Group is indisputable – not least because the Audi 80 pioneers the modular design.

A bestseller is celebrating its anniversary: With the first Audi 80, known internally as the “B1”, the Ingolstadt-based company hits the bull’s eye in 1972. It is intended to be “modern, but not trendy,” a reliable family car. On this, then Head of Technical Development at Audi Ludwig Kraus and Volkswagen AG, the new parent company, agree in the late 1960s. As in racecar construction, head developer Ludwig Kraus has his employees check every part to see where weight could still be reduced without compromising on long-term quality, solidity, and strength. The extremely lightweight Audi 80, which goes into production 50 years ago, impresses customers with its sporty handling and low consumption, making it, at the start of the 1973 oil crisis, exactly the right car at the right time. Winning “Car of the Year” the same year, the Audi 80 also wins over the international trade press.

Oliver Hoffmann, Member of the Board of Management of AUDI AG for Technical Development, still appreciates the achievement of his predecessor Ludwig Kraus and team: “In an impressive way, the Audi 80 demonstrates that Vorsprung durch Technik is a tradition at Audi.” The Audi 80 and its successor models have always been pioneers of major innovation. The four-cylinder TDI, the quattro drive with the self-locking center differential, the dual-clutch transmission, and the rear-axle sport differential – not to mention the five-cylinder turbo engines as in the first RS model – have repeatedly demonstrated Audi’s expertise in Vorsprung durch Technik. Designer Hartmut Warkuss helps shape the design of the first Audi 80 in the new objectivity style of the 1970s. In 1976, Warkuss is promoted to Head of Audi Stilistics, leaving a lasting impression on the design of several generations in Audi’s B, C, and D series. The Audi 80 rolls off the assembly line in four generations (B1 to B4) until 1994/95, when it is replaced by the Audi A4, known internally as the B5. With this model, the Ingolstadt-based company introduces a new nomenclature for its cars. The Audi A4 is now in its fifth edition; the B9 is available as a sedan and Avant, as an S and RS model, and as the Audi A5 in the Coupé, Sportback, and Cabriolet versions.

The Audi 80 celebrates its world premiere in the year the Summer Olympics are held in Munich: In July of 1972, the Ingolstadt-based company presents the car to the media, and in September – after the Olympics – to dealers. The B1 establishes a new market segment: the “compact sedan” or B series for short. The newly developed mid-size car rounds off the then model range of the brand with the four rings. The model’s technology introduces numerous new solutions and can soon be found in many Volkswagen Group models.

The two-door base model weighs in at just 835 kilograms – strict lightweight construction is one of the specifications set by Head of Technical Development Kraus. With a wheelbase of 2.47 meters and a length of 4.18 meters, he develops the sedan to be highly compact. Suspension engineer Detlef Banholzer implements negative steering roll radius for the first time in a European mass-produced vehicle – a solution that greatly improves stability during braking. With the diagonal layout of the hydraulic braking system, Audi puts the safety of passengers and other road users front and center. A torsion crank axle with spring dampers serves as the rear suspension. The front wheels are controlled by McPherson struts and wishbones. The engine of the Audi 80 sits lengthwise in front of the driven front axle, the four-speed transmission behind it. Four engines are available at market launch; the displacement ranges from 1.3 to 1.6 liters, with power outputs ranging from 40 kW (55 PS) to 74 kW (100 PS). The design highlight of the lively, straightforward four-cylinder engine is the valve control by overhead camshaft with toothed-belt drive and maintenance-free hydraulic tappets. Head of Technical Development Ludwig Kraus comes up with the idea of a modular-design series, designing the four-cylinder overhead camshaft (OHC) engine. Developed by engineer Franz Hauk and team, the engine is known internally as the EA 827 and becomes the most widely built engine in the VW Group.

With the new generation of OHC engines and its many technical highlights, the Audi 80 quickly becomes a sales success for the Ingolstadt-based company: By the end of production in the summer of 1978, more than one million B1 models will have rolled off the assembly line. With the production capacity at the Ingolstadt plant soon no longer sufficient to meet the high demand, the Volkswagen plants in Wolfsburg and Emden are involved in production.

The Asso di Picche, a coupé concept car styled by Giorgio Giugiaro and built by coachbuilder Karmann, demonstrates the sporty potential of the B1 as early as 1973. The Audi 80 GT goes to series production in 1973, before being replaced by the Audi 80 GTE in October of 1975: Its engine has a power output of 81 kW (110 PS). The driving performance of the new top model already hints at the dynamics that Audi would soon unleash. In 1976, the B1 receives a model update that gives the sedan large block headlights, visually aligning it more closely to the new generation of the Audi 100. Light and fuel-efficient, the Audi 80 becomes very popular, especially after the 1973 oil crisis; the car is also a hit in the USA, where it is sold as the “Fox”. 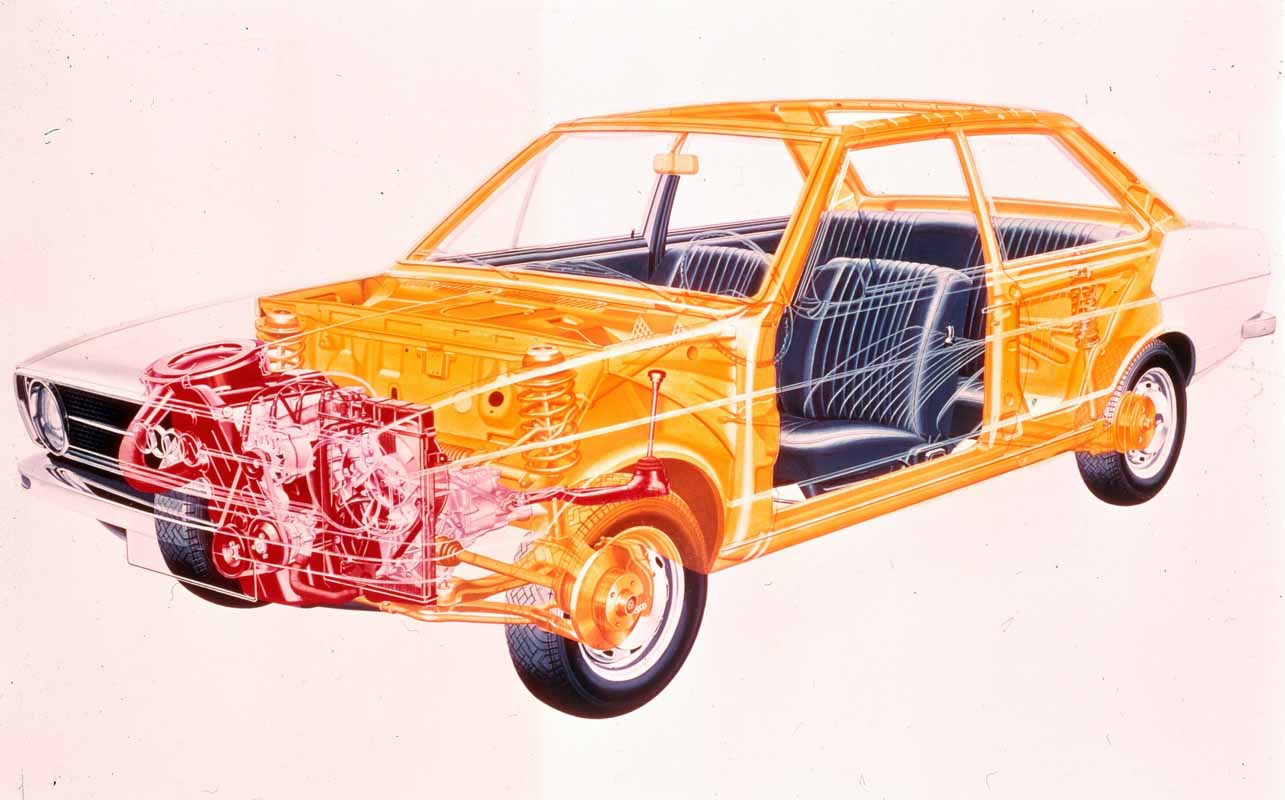 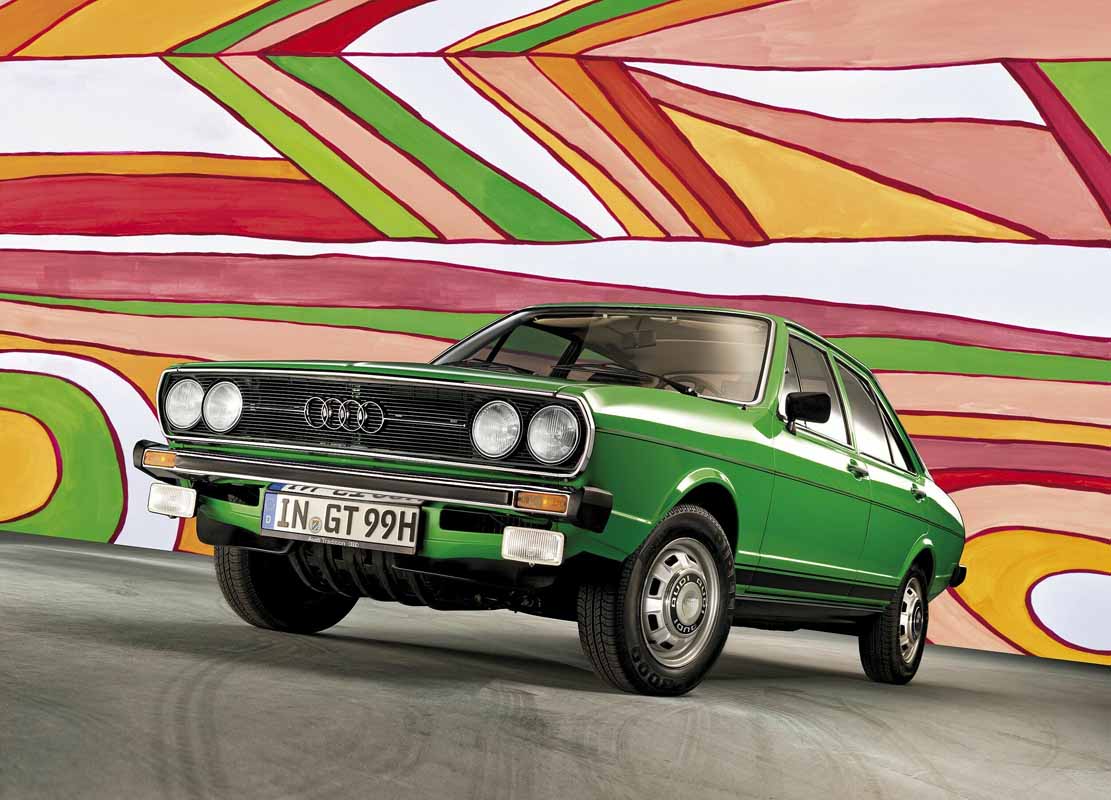 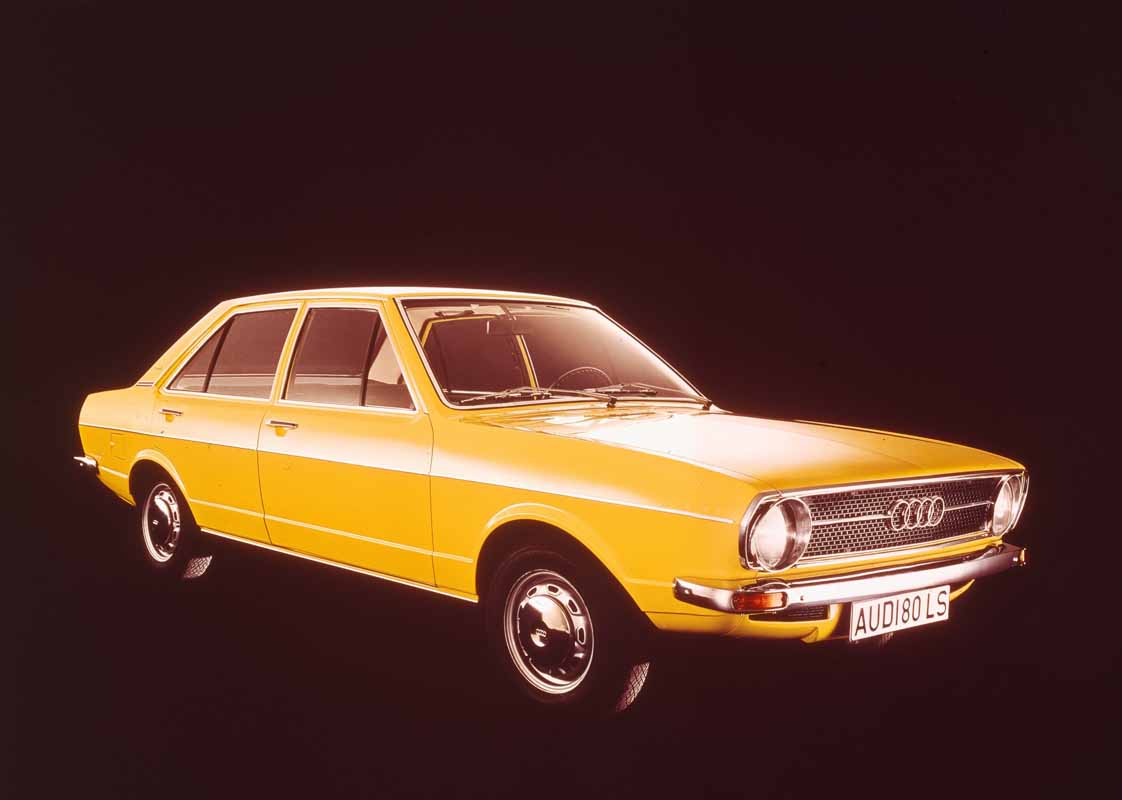 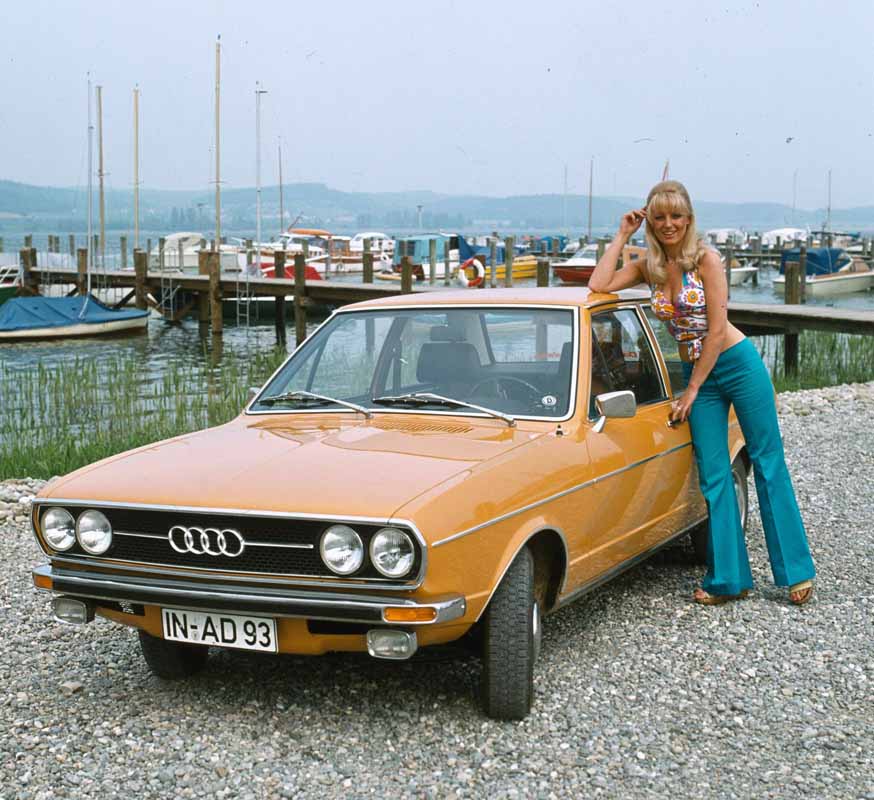 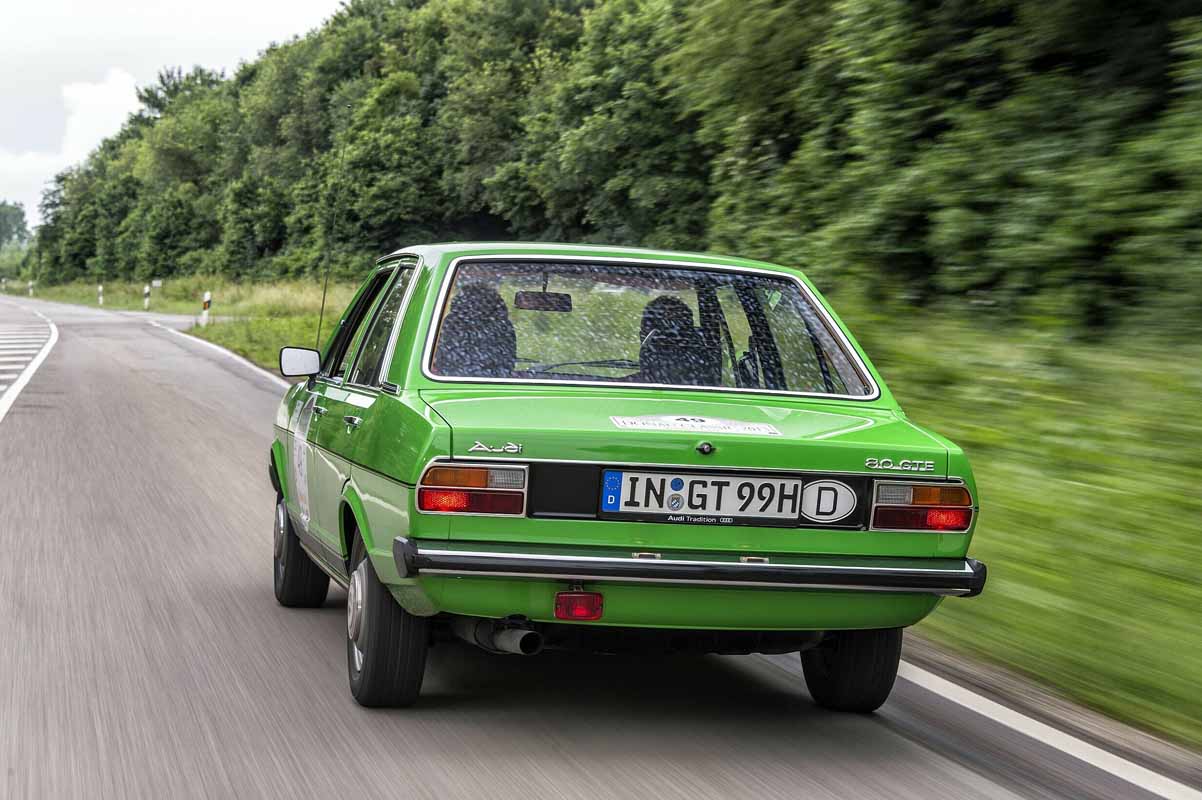 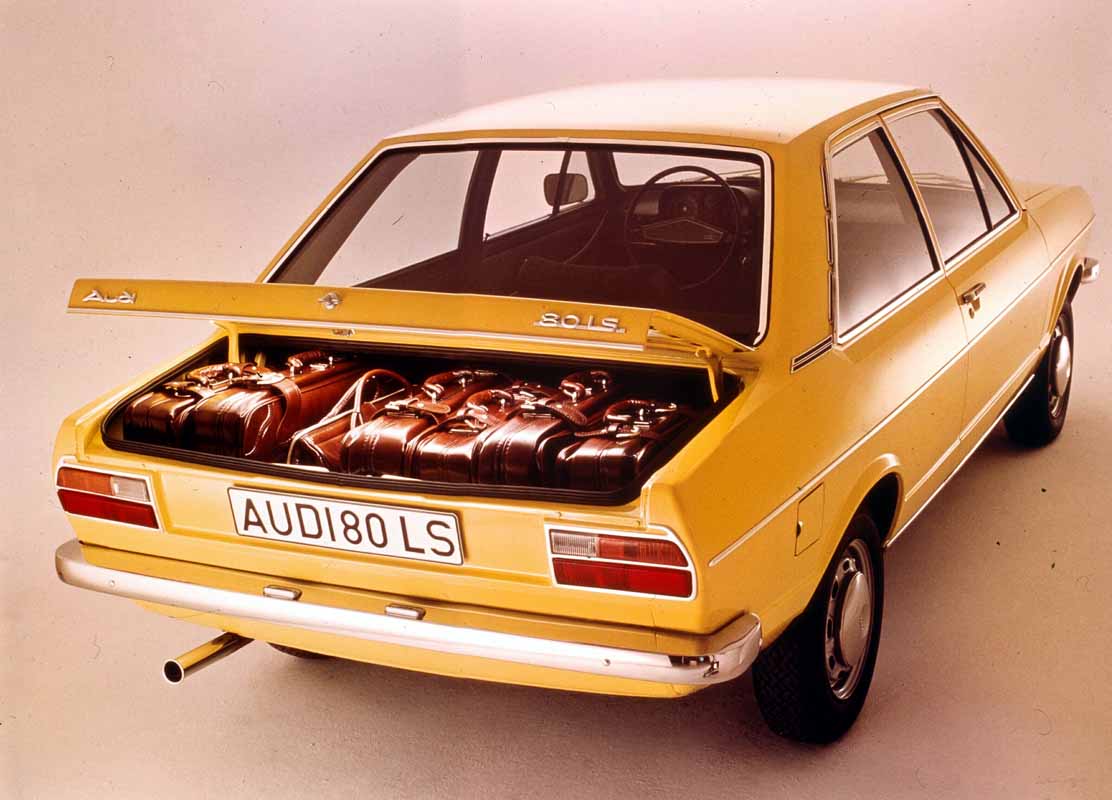 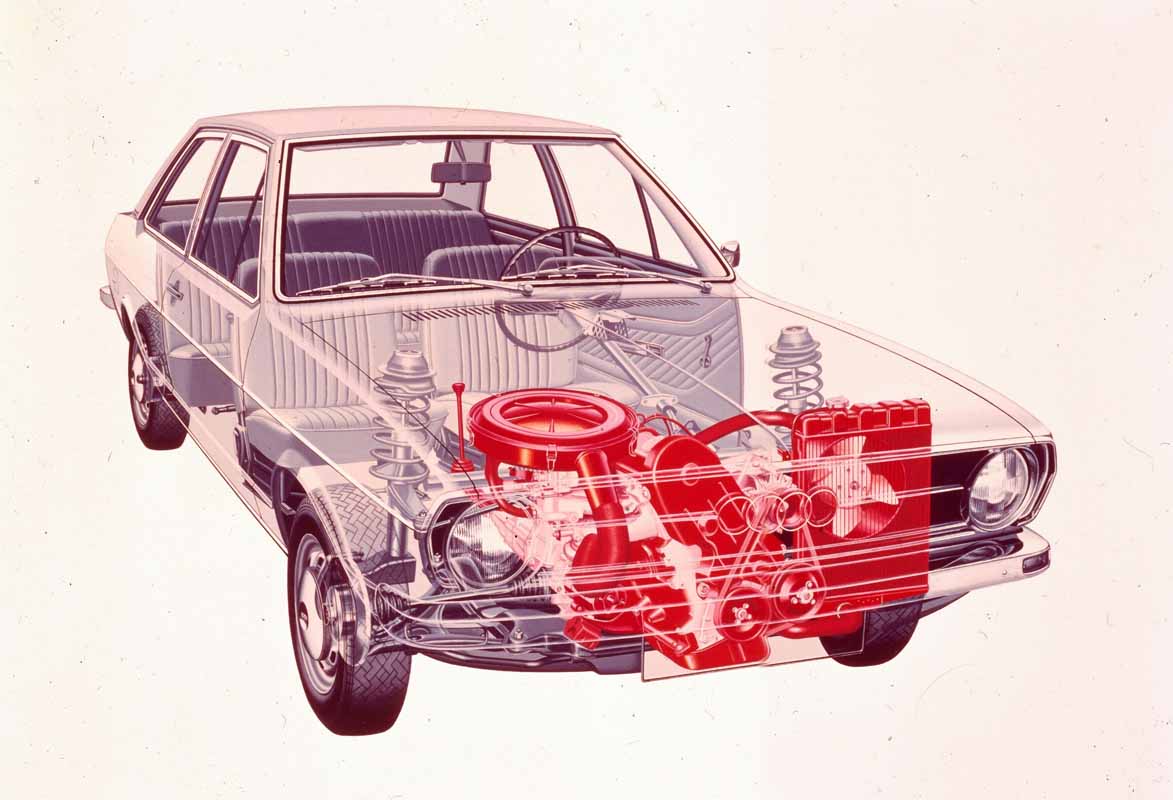 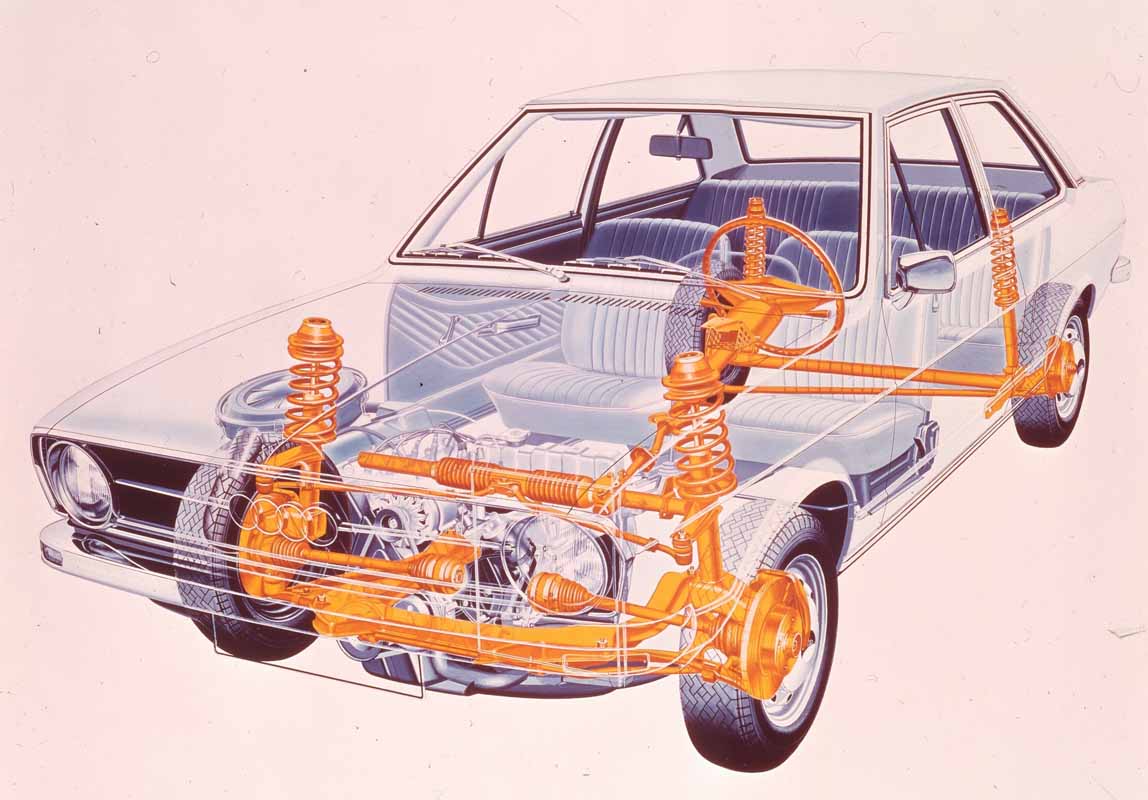