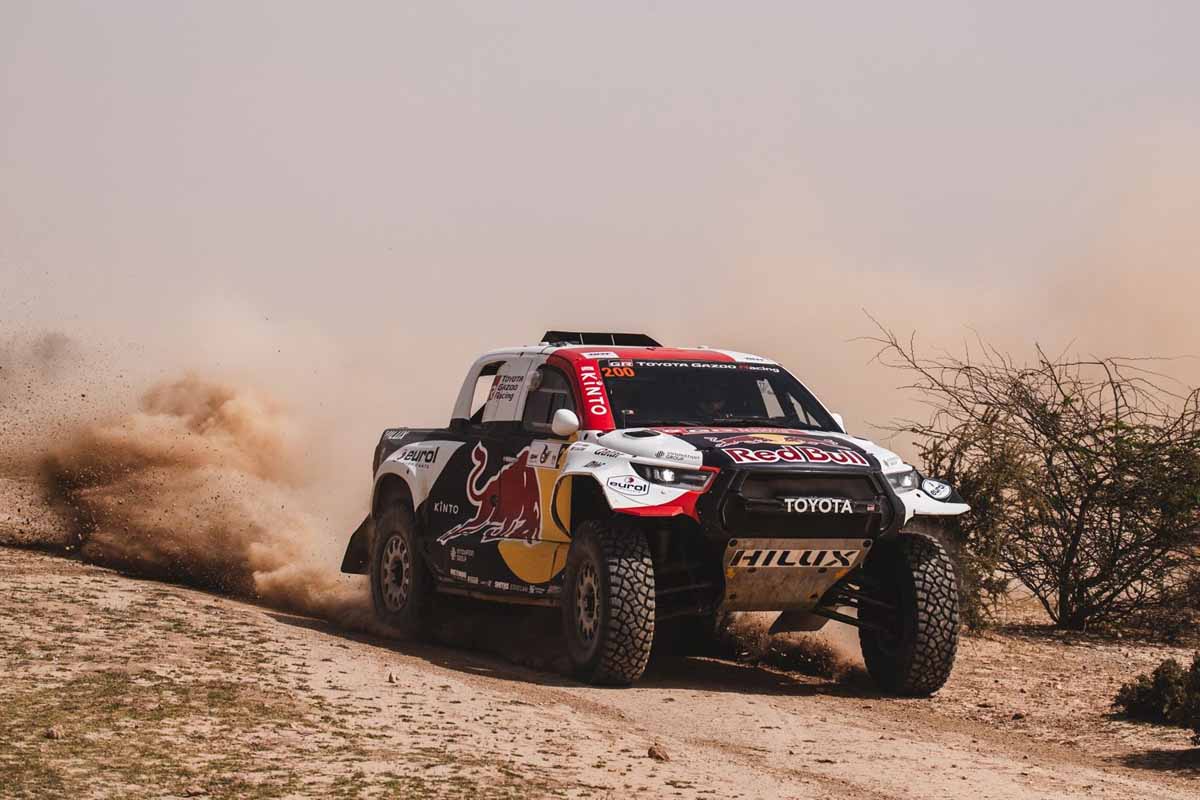 Qatar’s Nasser Saleh Al-Attiyah and Polish junior rider Konrad Dąbrowski were confirmed as the winners of the Qatar International Baja on Saturday, but strong winds, limited visibility and safety concerns meant that the final stage for the FIA competitors was cancelled.

With visibility reduced by shifting sands and gusting north-westerly winds, Al-Attiyah and French co-driver Mathieu Baumel were unable to take the revised start of the final section in their Toyota GR DKR Hilux and the result stood as per the classification on Friday evening, although reduced points were awarded to registered contenders in the FIA Middle East Cup for Cross-Country Bajas.

“Safety is the most important thing for everyone and it was the only decision to cancel the stage today,” said Al-Attiyah. “It would have been a good fight. I was very happy with the way the car performed yesterday and I am always so happy to win races in Qatar. This terrain is tough and the navigation is never easy.”

Al-Rajhi said: “It was a clever and good decision to cancel the stage, safety is very important. There was a lot of wind and dust and the organisers tried to push us to CP1 to try and see how it was. We could not see, so it was a good decision. We want to do motor sport in a safe way. Sure I am happy with my position. Second place in Qatar, you have to be happy. To win here is difficult. Nasser has a lot of experience.”

Duust Rally Team’s Dąbrowski was never troubled over the final blustery stage, moved ahead of his rivals as the morning progressed and stormed to an emphatic win by the margin of 10min 53.9sec. The success marked the first ever for Husqvarna in Qatar and a second Polish triumph on two wheels after Maciej Giemza topped the standings at the Qatar Cross-Country Rally in 2018.

“It was really difficult today in some places with the white sand and the strong wind, it was difficult see and almost impossible to see the angles,” said a delighted Dąbrowski. “I enjoyed it. I was pushing today. I didn’t want the guys to catch me. I focused on the navigation and the speed was coming with it. It was a really good day. First of all, I had my first ever stage win here and then to win every stage in the rally and to win the rally, I did not expect that. I am really surprised and really happy.”

Emirati Mohammed Al-Balooshi and Great Britain’s Maki Rees-Stavros rode close together for much of the final stage to come home in second and third places.

Al-Balooshi said: “I think second position was okay in the conditions. I congratulate Konrad on his win. I will come back next year and try to go one better. Now I must concentrate on getting results in the next races.”

Third-placed Rees-Stavros added: “With the wind it was so difficult. I caught Mohammed just before the refuel and I tried leading. Then I got a bit lost and we took it turns. Buzzing to finish on the podium. I can’t believe it. My best ever result, for sure.”

“Unfortunately day two was cancelled,” said Meeke. “The wind was really strong on the far side of the country where the stage was due to start. It was like a mini sandstorm and visibility was really low. The organisers took a decision on safety. It’s a bit disappointing for everyone not to be able to get more kilometres. I really enjoyed day one and the two stages we did. I was happy we had a good rhythm. I can say it’s my first victory in off-road. I continue to learn and look forward to the next events.”

Khalifa Saleh Al-Attiyah and Max Delfino were handed 12 minutes of time penalties on Friday evening for missing route waypoints. The Qatari slipped to sixth overall but secured the FIA T4 category win by 4min 32.8sec from the father and son crew of Sadoon and Nasser Al-Kuwari. Rashid Al-Muhannadi, Emirati Yasmeen Koloc and Adel Abdulla rounded off the top finishers in their Can-Ams. 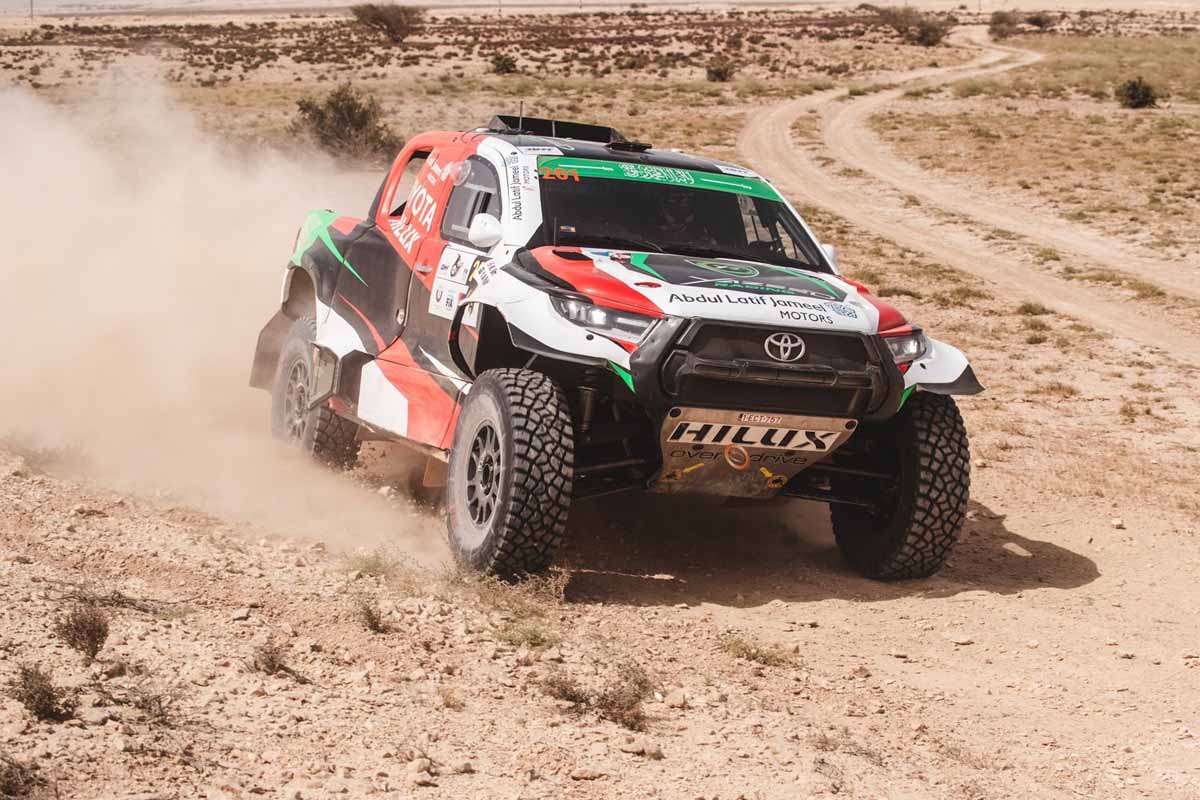 Dani Sordo’s progress was ruined by missing waypoints on Friday and the Nasser Racing Can-Am debutant slipped down the rankings as a result. He was eventually classified in 13th overall and eighth in T3.

The wind had strengthened overnight and was forecast to increase in speed from the north-west around an hour after Dąbrowski led the riders and drivers into their final 202.39km selective section.

This started in the west of Qatar and wound its way through the central deserts, via a refuelling point for the bikes at PC2, to finish through the dunes and sand flats in the south of the country. High tides and soft mud meant that the traditional final runs along the beaches and low tidal areas were not available on this occasion.

Several riders were handed penalties for missing waypoints on Friday. Al-Sheeb dropped down the over-450cc rankings with 5hr 57min of time penalties, Kongshøj was handed 4hr 01min and Al-Shatti was given 3hr 58min. Qatar’s Mohamed Al-Kaabi did not start this morning.

Dąbrowski was the class of the bike field from the outset and he pulled away from Al-Balooshi and Rees-Stavros as the stage progressed and the wind intensified. The Pole crossed the finish line 5min 43.6sec faster than his nearest rival to seal a superb win.

Al-Balooshi and Rees-Stavros rode close together to the finish but Saudi’s Abdulhalim Al-Mogheera retired from seventh place on the run south towards the Inland Sea.

The spotlight duly switched to the western deserts and the start of the car race as the wind intensified. Abdulla Al-Kuwari did not restart in his T3 Can-Am, as Baja officials amended the official start location for the FIA section on visibility and safety grounds and diverted entrants to a new control point shortly after the original PC1 – 38.69km.

But the weather deteriorated still further and minimal visibility and shifting sand forced officials to cancel the stage for cars and instruct everyone to return to Lusail. 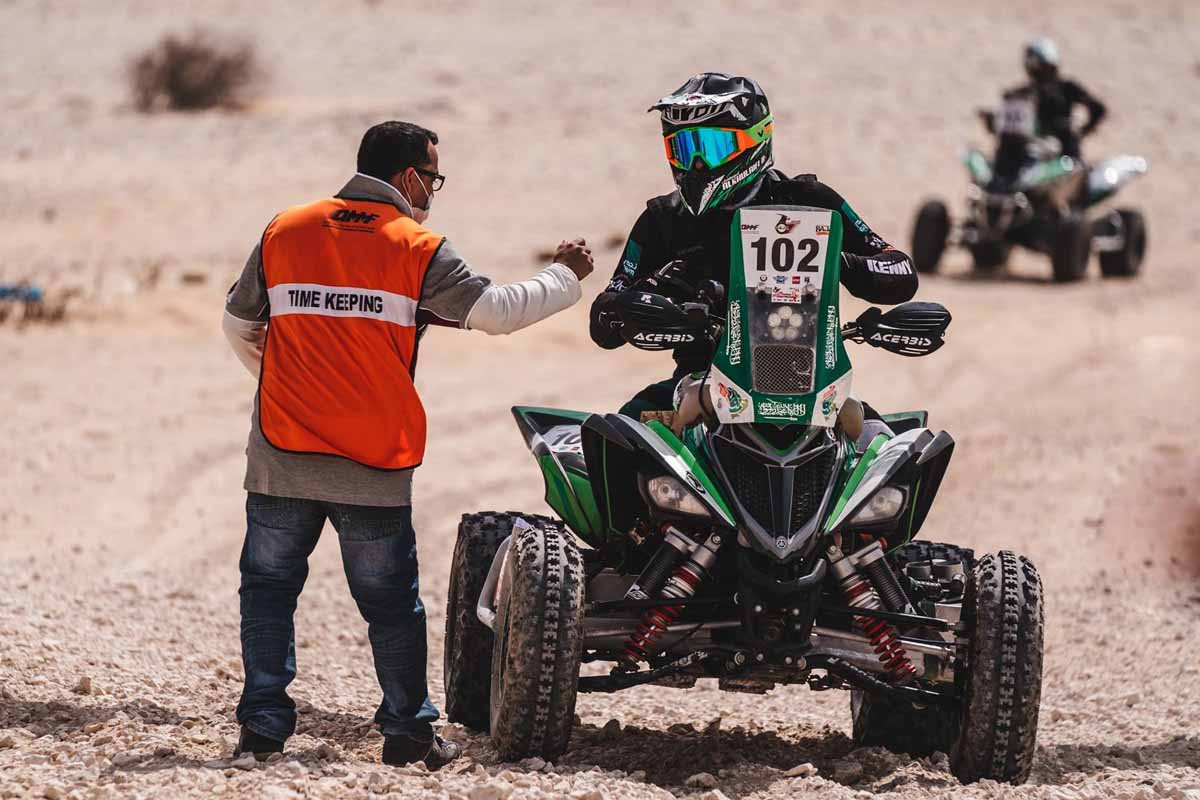 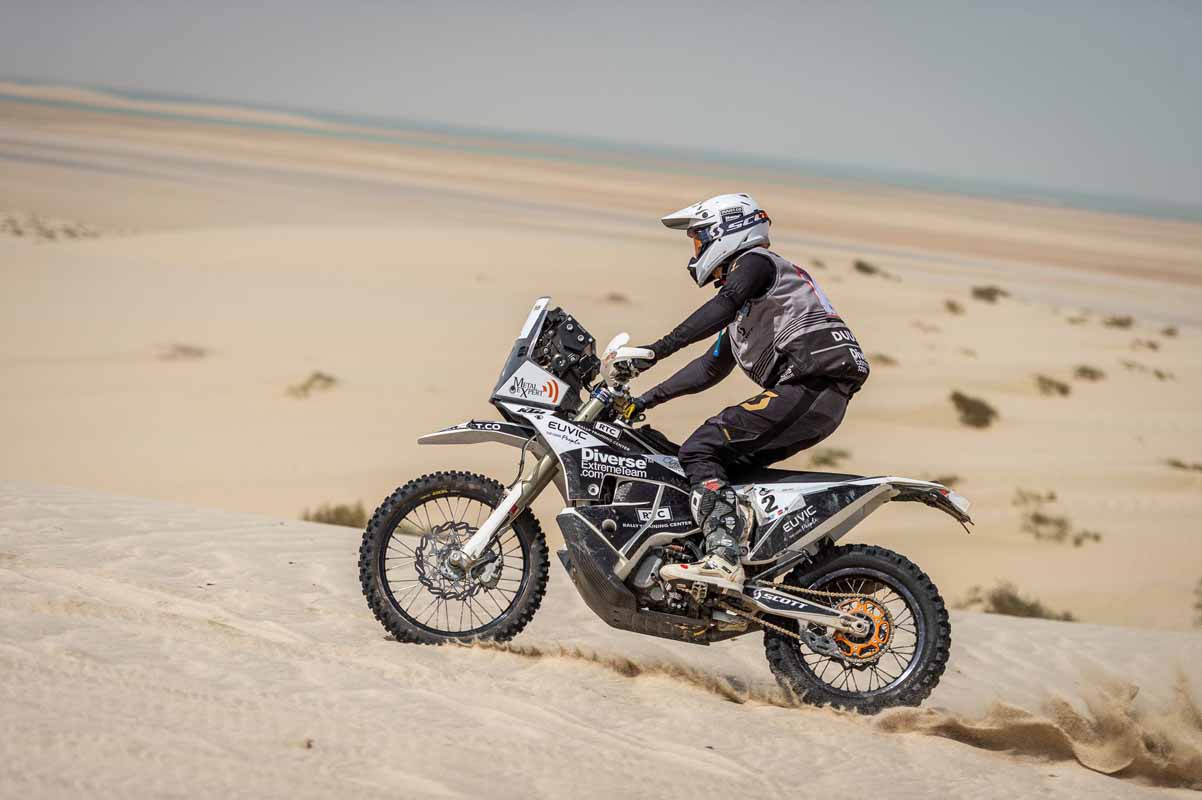 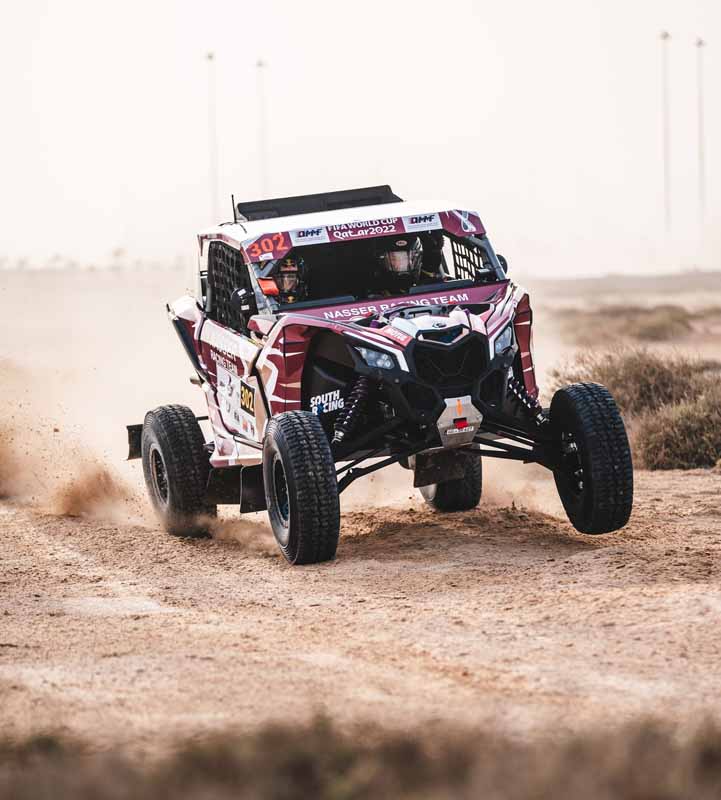 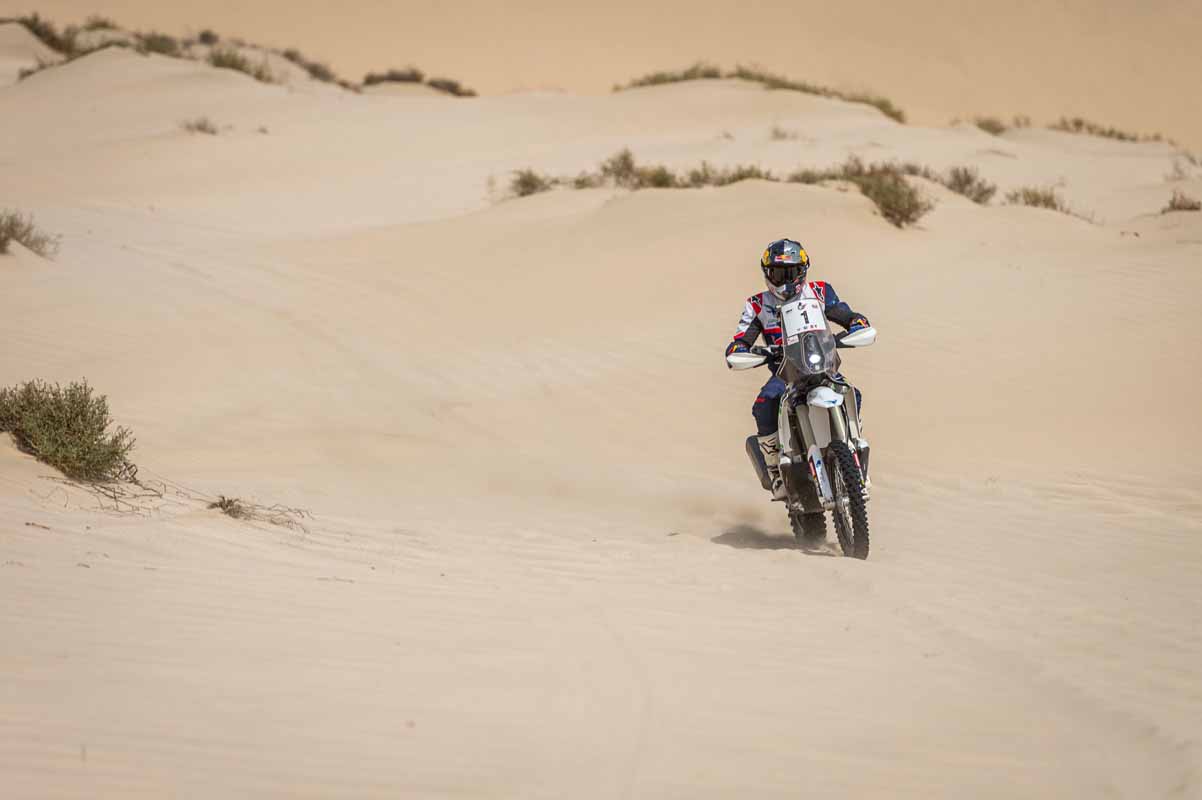