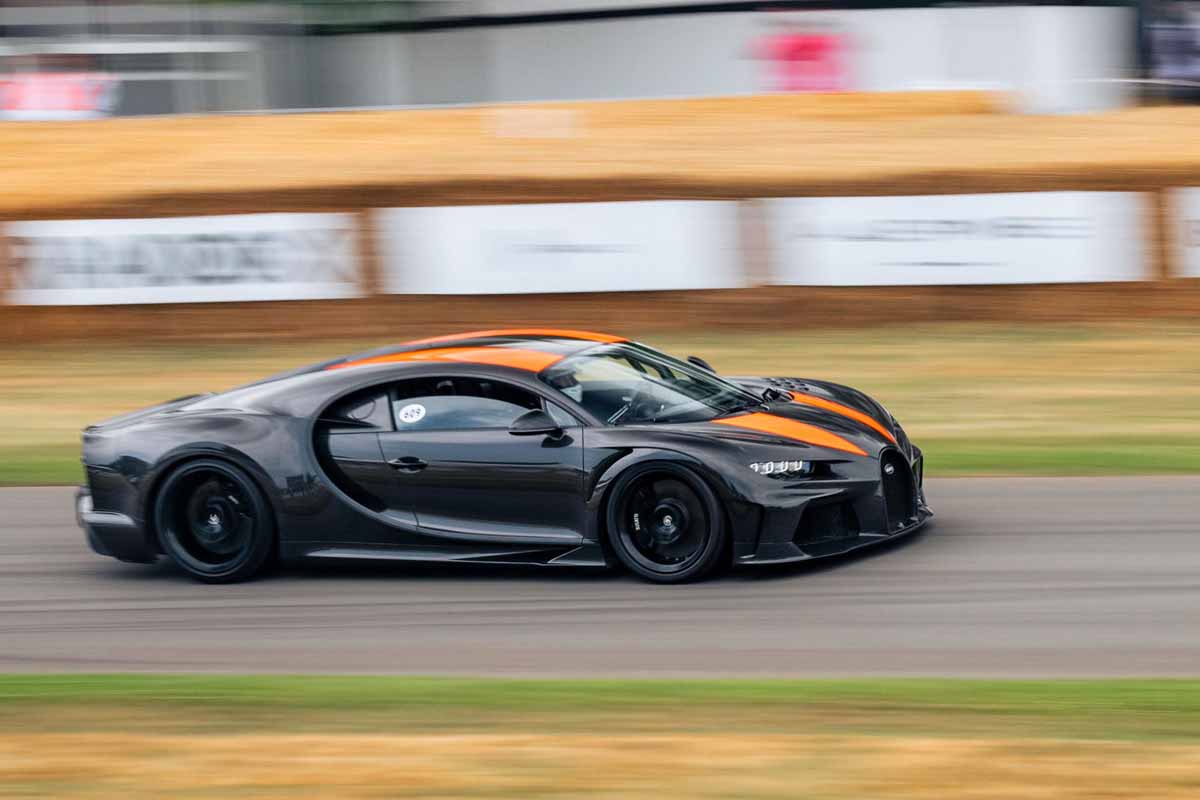 From 23rd-26th June, three of Bugatti’s world-record setting cars are assembling at one of the most prominent automotive events in the world to be on dynamic display as a group for the very first time. The annual one-of-a-kind festival sees leading marques and privateers showcase all from pre-war classic racers to the latest cutting-edge automotive technology. This year, Bugatti is demonstrating a trio of hyper sports cars that helped cement its place at the forefront of automotive design and engineering, showcasing a fleet with a combined power output of 4000 PS.

The spine of the Goodwood Festival of Speed is 1.9 kilometers of narrow, winding road flowing uphill through the grounds of Goodwood House in Sussex, England. Many of Bugatti’s iconic vehicles from Type 35 racing cars of the 1930s to the EB110 of the 1990s have navigated the challenging hillclimb route that demands bravery behind the wheel. The slightest touch of the grass running parallel to the ribbon of road can spell disaster.

This year sees the original world record-setting hyper sports cars of the Veyron 16.4 Super Sport, Veyron 16.4 Grand Sport Vitesse and Chiron Super Sport 300+¹ on dynamic and static display – each in their distinctive black and orange liveries – as automobiles that have helped defined the marque’s modern era.

Christophe Piochon, President of Bugatti Automobiles, commented: “With these three record-breaking automobiles, Bugatti has demonstrated its abilities over many years to overcome immense engineering and design challenges to produce hyper sports car that set new standards across the industry. Each represents the continual evolution of the brand and our collective desire for perfection. I’m looking forward to passionate Bugatti fans from across the world being able to witness these marvels showcase their speed at the Goodwood Festival of Speed.”

Bugatti launched into a new decade in 2010 at a speed of 431 km/h (268 mph) with the Veyron 16.4 Super Sport – a new record for road-going production cars. The Super Sport features a number of bespoke modification to coax greater performance from the Veyron. Four enlarged turbochargers and bigger intercoolers were used to boost the power of the W16 engine, and the chassis was extensively redesigned to maintain safety at extreme speed.

The result was a car with a power output of 1,200 PS and maximum torque of 1,500 Nm capable of a limited top speed of 415 km/h. The first five Super Sports to leave Molsheim constituted a special series of their own – the World Record Editions – with the same configuration as the record-setting car.
Bugatti’s Pilote Officiel, Pierre-Henri Raphanel, the man who drove the Veyron 16.4 Super Sport into the record books in 2010, is once again pushing the car to its limit at Goodwood Festival of Speed this year.

Three years later in 2013, the world’s fastest roadster was born. Unveiled at the Shanghai Motor Show in 2013, the Bugatti Veyron 16.4 Grand Sport Vitesse went on to set the world record speed for open-top production cars at the proving grounds in Ehra-Lessien, reaching a maximum speed of 408.84 km/h (254.04 mph). During the record-breaking drive, the Veyron 16.4 Grand Sport Vitesse  was driven by Chinese entrepreneur and passionate racing driver, Anthony Liu.

Factors that enabled such performance at the upper limits include a carbon monocoque with high torsional rigidity. Keeping wind noise and air turbulence to a minimum in the vehicle’s interior is a particular concern with open-top vehicles. In the Vitesse, a specially developed roof spoiler along with an intricately designed windbreak guarantees tranquil open-top driving.

At the Goodwood Festival of Speed, the hyper sports car is being driven by French racing driver Olivier Thévenin – Le Mans and GT racing veteran.

In summer 2019, the Chiron Super Sport 300+ raised the bar to a level once thought to be unreachable in a road car. With its 8.0-liter W16 engine and 1,600 PS power output, the hyper sports car became the first ever series-production car to break the 300 mph barrier: it achieved a precisely measured speed of 304.773 mph, which corresponds to 490.484 km/h.

The Chiron Super Sport 300+ differs from the Chiron² first and foremost due to its extended and aerodynamically optimized longtail’ bodywork, which is designed for extreme speeds past the 420 km/h mark. Extending the body 25 centimeters, laminar flow can pass over a longer surface and reduce the aerodynamic stall by more than 40 percent. Bugatti engineers developed a new thermal management system for the hyper sports car’s engine and gearbox, ensuring all remain cool even when traveling at the automobile’s top speed.

The very car and driver to set the world record are appearing at Goodwood Festival of Speed as a cornerstone of Bugatti’s history. Andy Wallace – legendary endurance racing driver and Bugatti’s Pilote Officiel – occupies a very familiar 300+ mph seat. 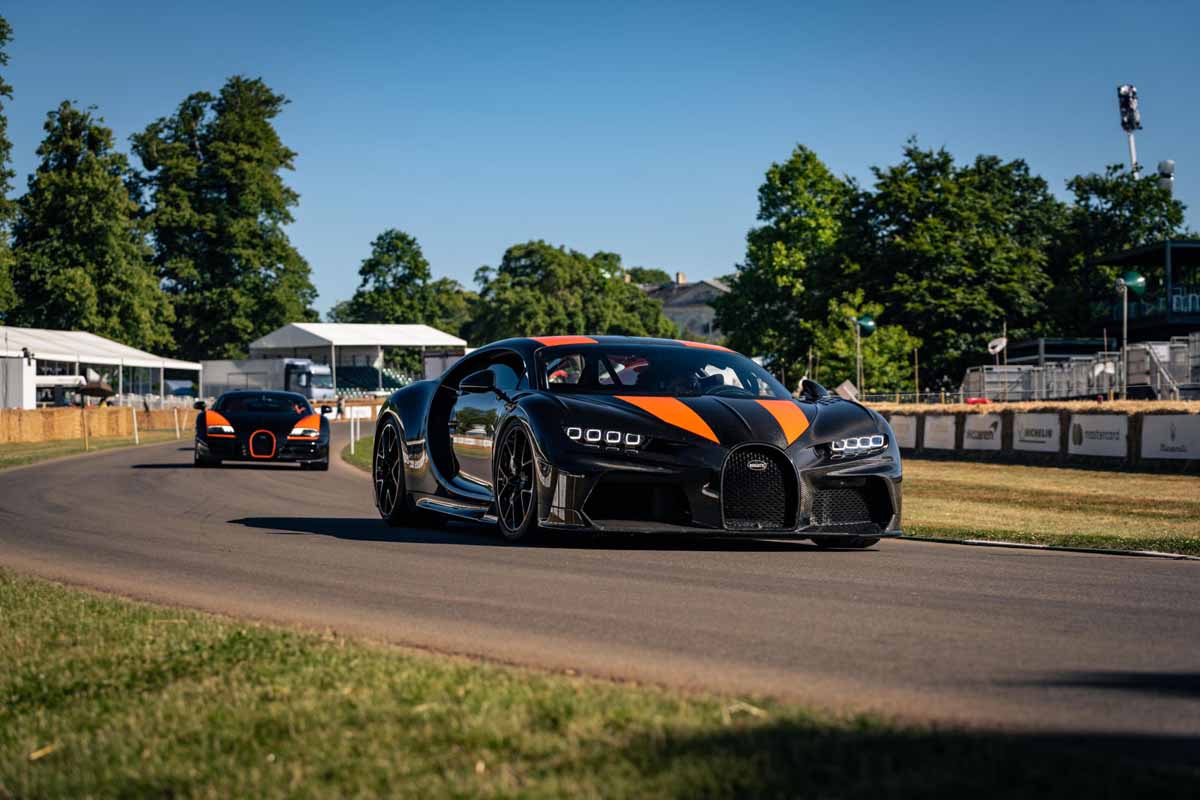 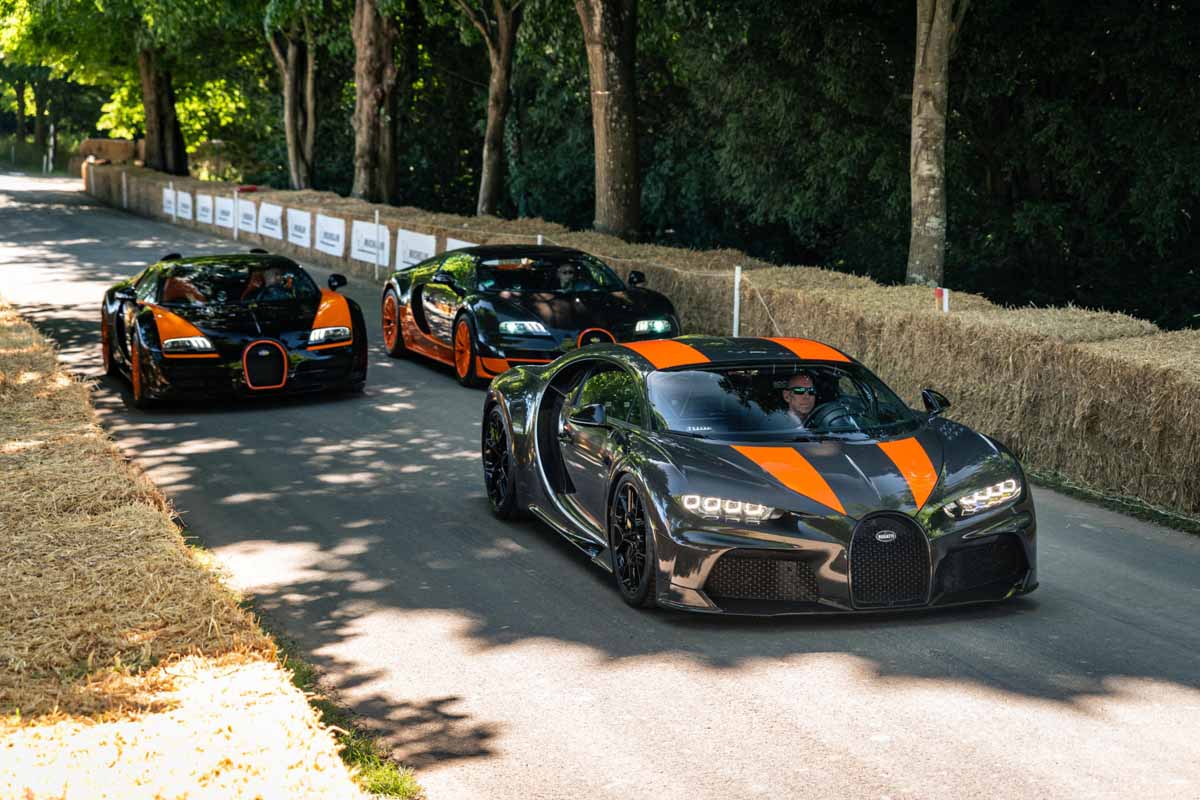 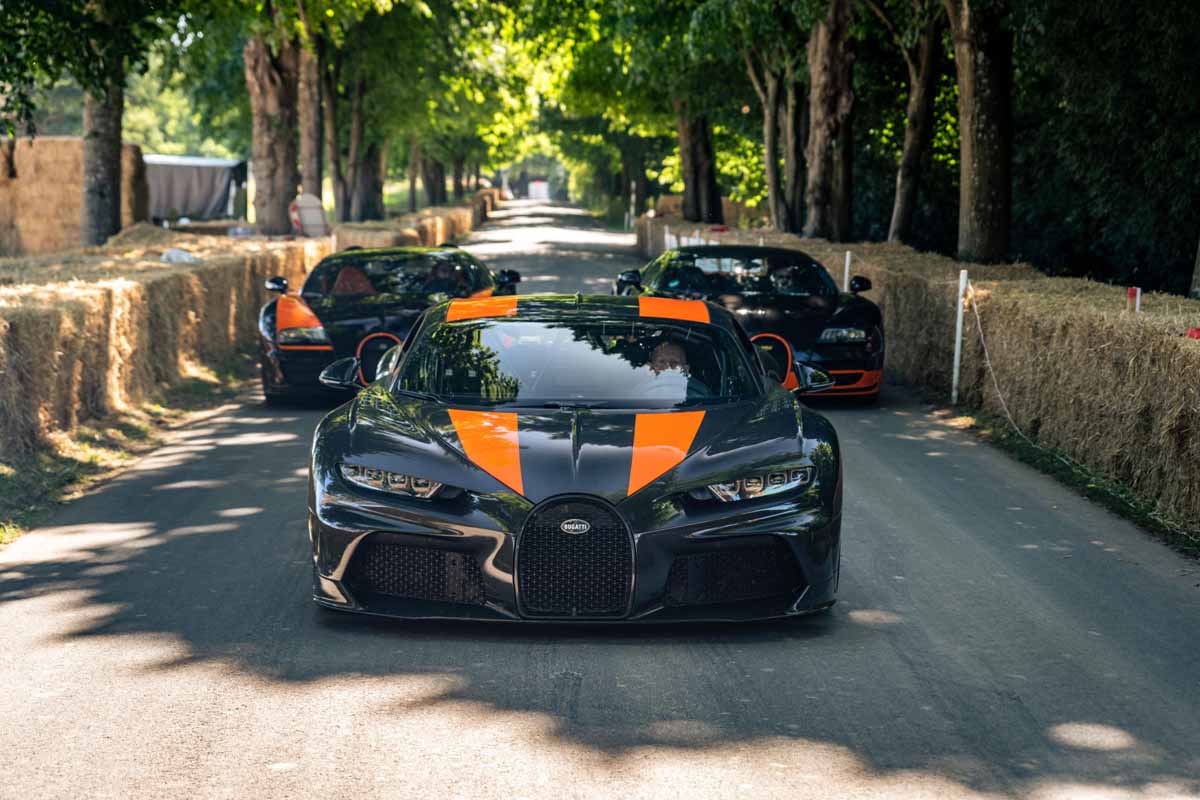 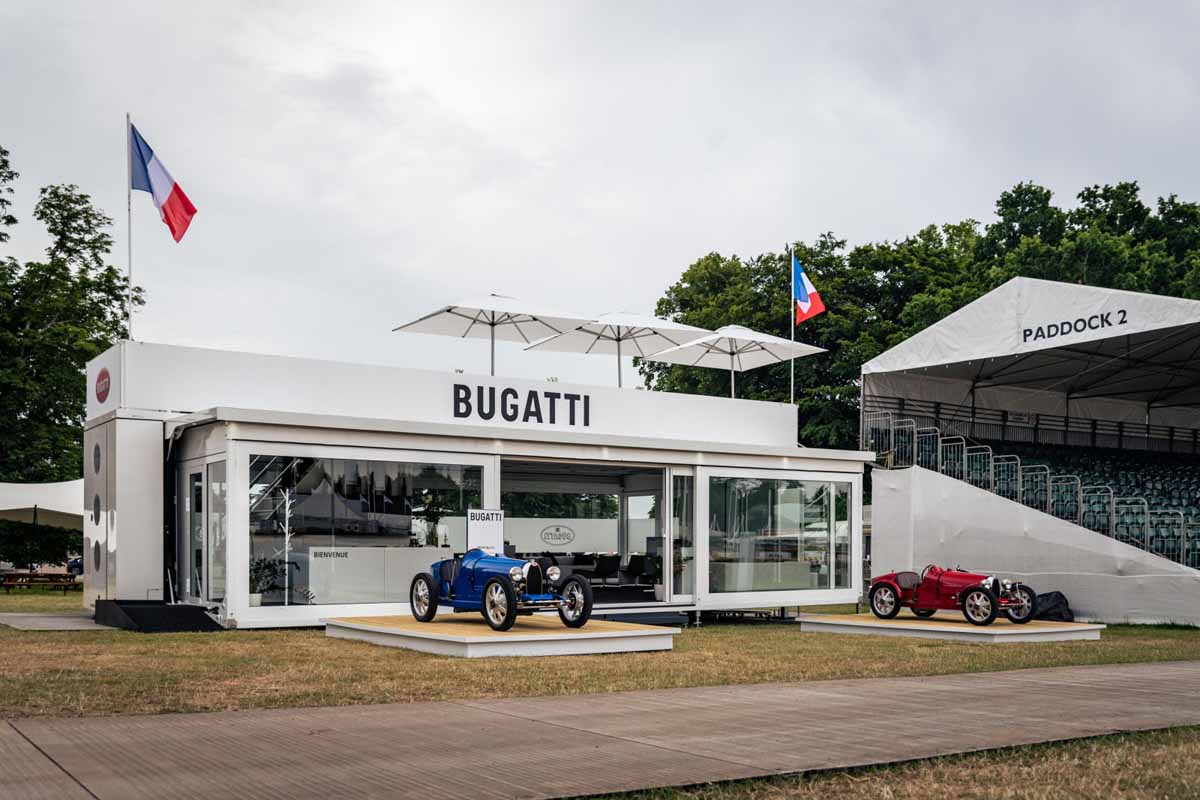 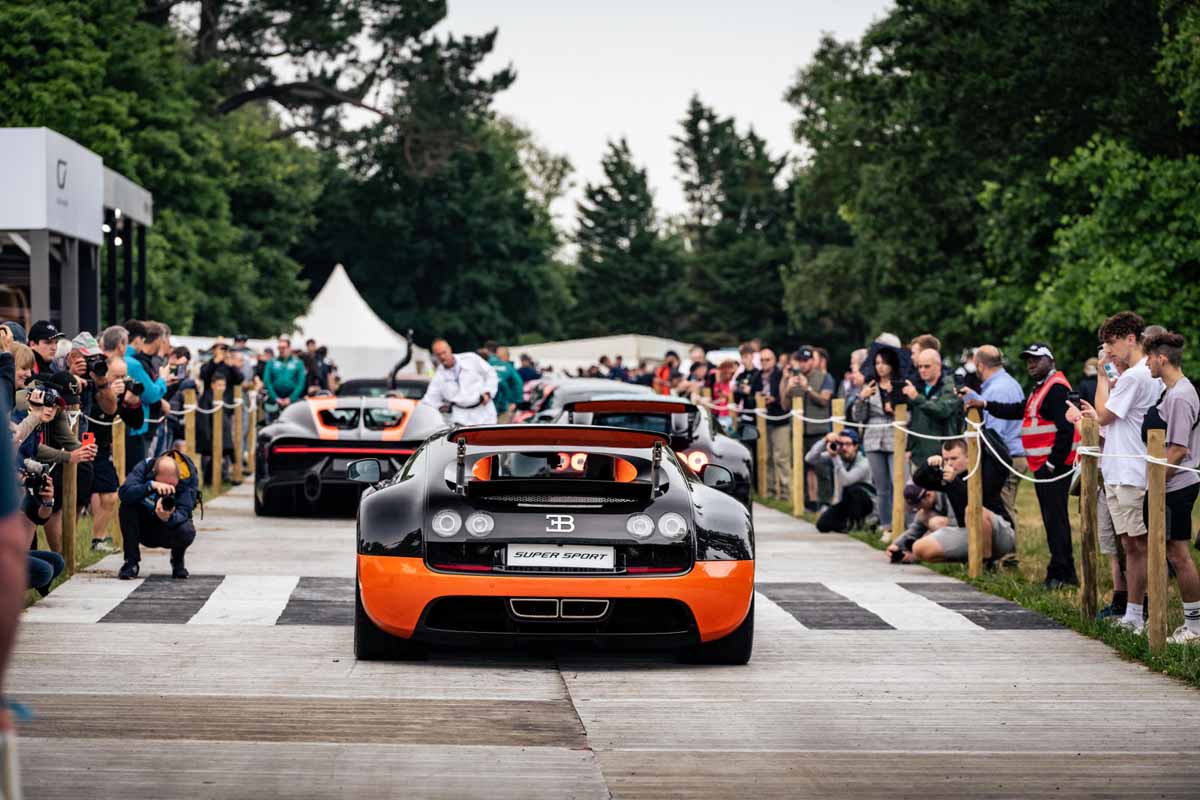 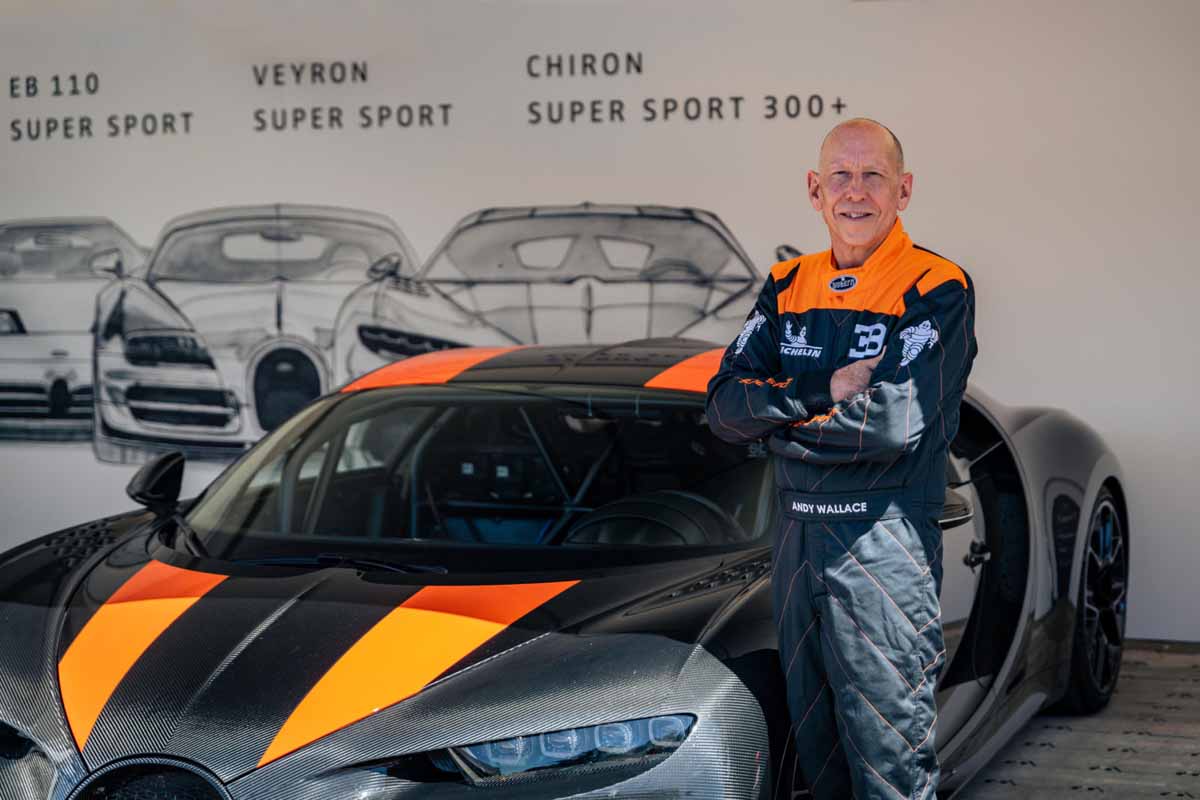 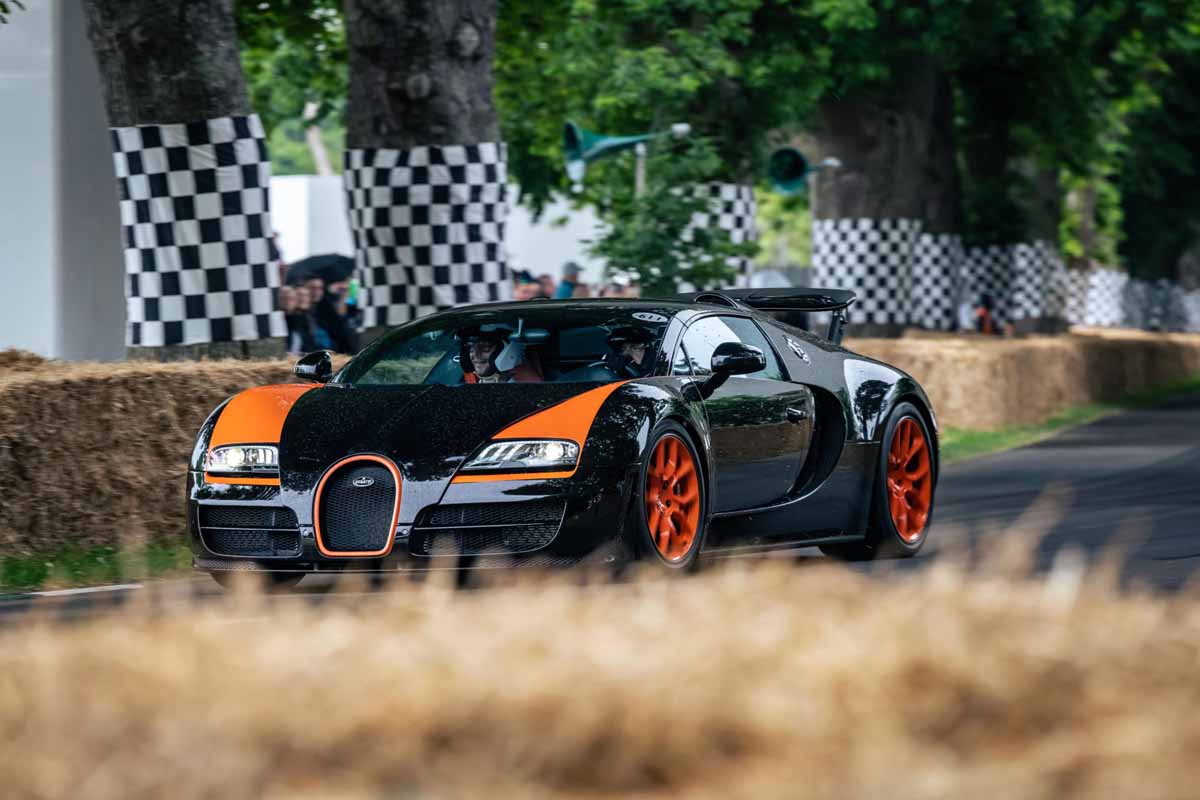 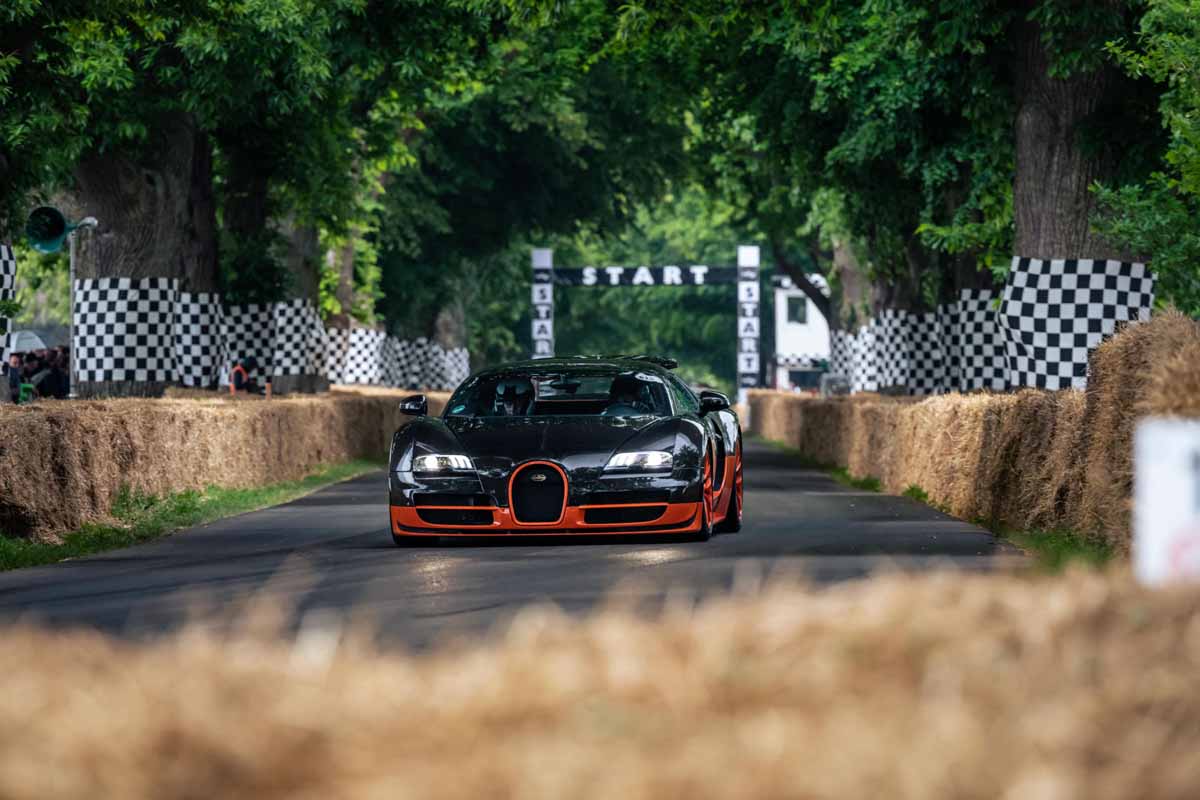 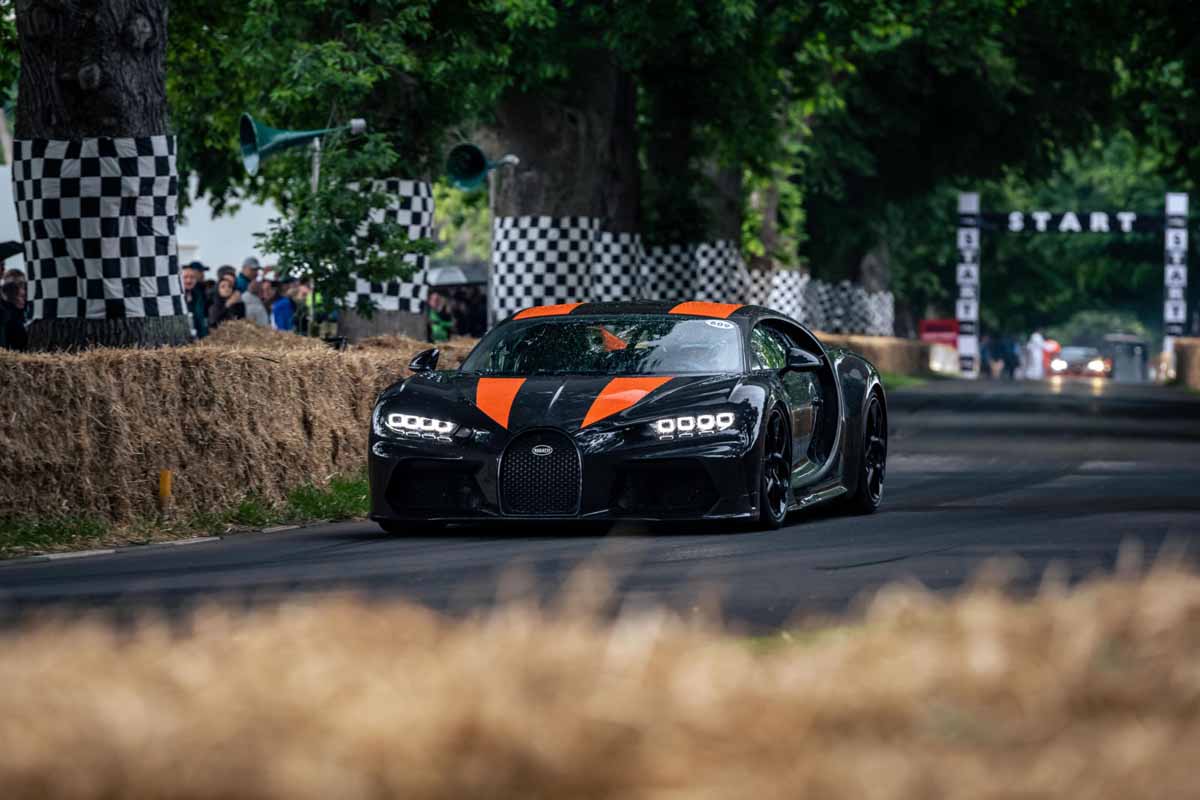