85 years of success: ŠKODA at the Monte Carlo Rally 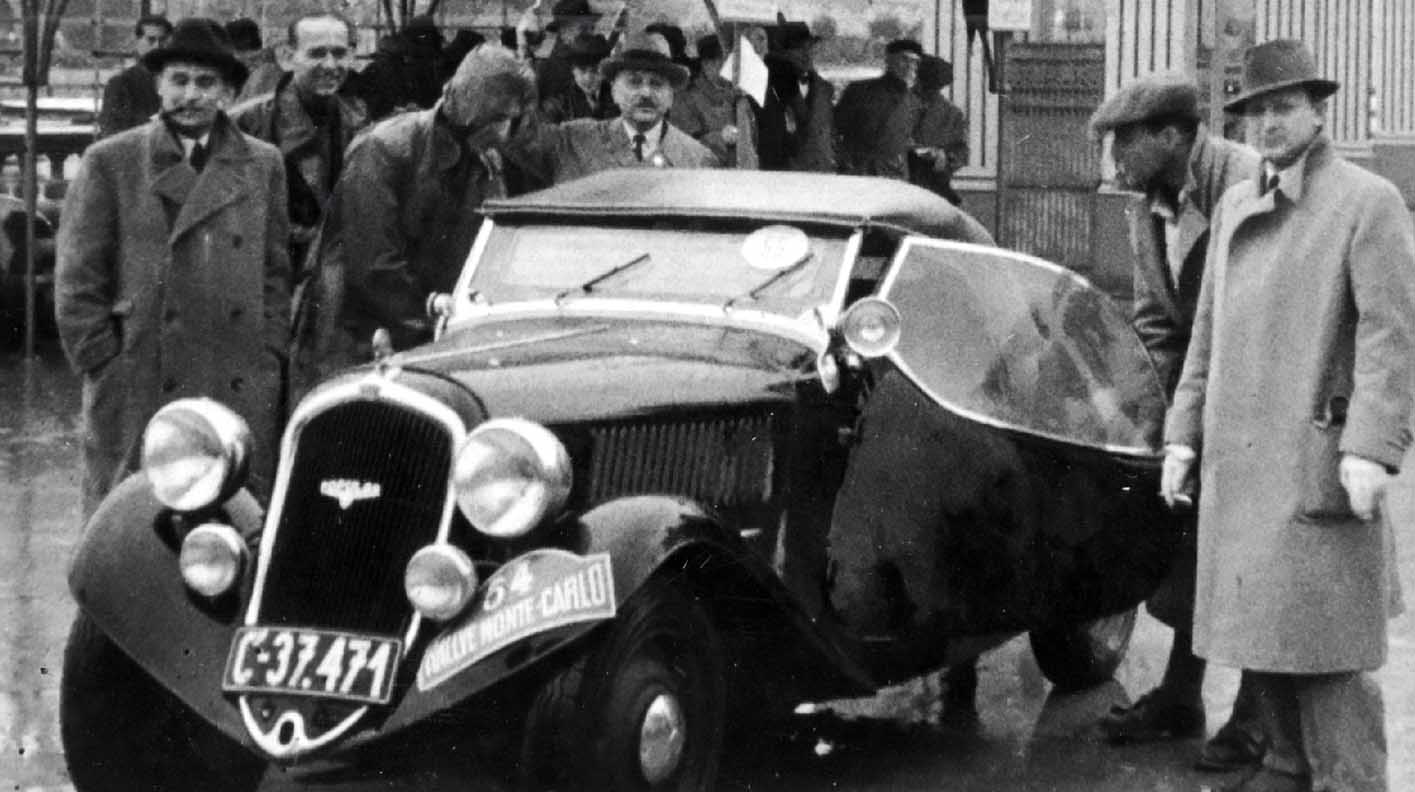 ŠKODA AUTO is celebrating a special anniversary this year: 120 years ago, the Czech car manufacturer began its successful motorsport involvement, which has included numerous victories at the famous Monte Carlo Rally over this long period. Laurin & Klement vehicles were entered in the second run of the rally classic in 1912, and in 1936 a model with the winged arrow was on the start line for the first time at the legendary competition – the POPULAR SPORT roadster finished in second place in the under-1.5-litre class.

After the Second World War, ŠKODA vehicles initially earned a name for themselves in the under-1300 cm3 class, as demonstrated by the OCTAVIA TS hat-trick between 1961 and 1963. In the 1990s, the FAVORIT 136 L continued this success story in Monte Carlo with four class victories in a row, taking first place from 1991 to 1994.

The four-wheel-drive FABIA has been causing a sensation on the special stages in the Maritime Alps above Monaco since the 2010s. And in 2018, the R5 model with turbo engine drove to victory in the WRC2 category at the Monte.

The Monte Carlo Rally is one of the longest established, best known and most demanding motorsport events in the world. Since 1911, it has regularly challenged drivers, co-drivers and teams in January with adverse weather and road conditions in the mountainous region above the principality.

With its fixed place in the annual motorsport calendar, it is traditionally the start and also the highlight of the World Rally Championship, which was held for the first time in 1973.

The car manufacturer from Mladá Boleslav, whose successful involvement in motorsport dates back to 1901, was represented at the second run of the racing event: On 21 January 1912, Count Alexander “Sascha” Kolowrat-Krakowský set off in a Laurin & Klement vehicle and drove the long distance from Vienna to Monte Carlo. At that time, Vienna was one of the ten starting points of the event, which was then organised as a rally.

Kolwrat-Krakowský covered a distance of 1,319 kilometres in temperatures as low as -18 degrees Celsius and had to pass numerous checkpoints. In Monte Carlo, the organiser awarded additional points for the elegance and comfort of the automobile as well as its technical condition. In addition, the drivers had to prove their driving skills in a dexterity test. 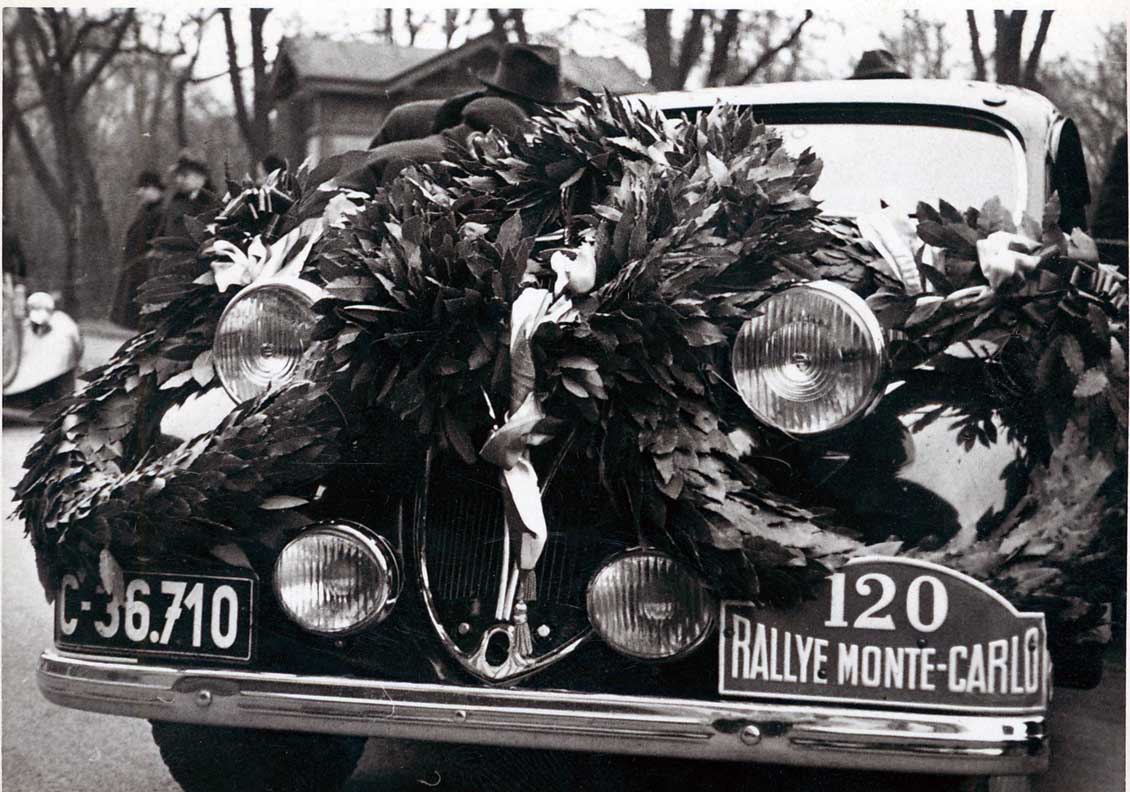 Heroes of the pre-war era: ŠKODA POPULAR and RAPID

Eighty-five years ago today, on 25 January 1936, Zdeněk Pohl and Jaroslav Hausman wrote the next chapter in ŠKODA AUTO’s motorsport history at the Monte Carlo Rally. The well-coordinated team would be heading to the start in a custom-built ŠKODA POPULAR SPORT.

The roadster with a top speed of 110 km/h was based on the modified chassis of the POPULAR but used the more powerful 1.4-litre engine of the RAPID. Its two petrol tanks held up to 170 litres of fuel. With an average consumption of 11.3 litres per 100 kilometres, the four-cylinder engine had a range of 1,500 kilometres. The total weight was 790 kilograms, of which the open-top body accounted for 250 kilograms.

With driver and passenger, the POPULAR SPORT weighed in at 960 kilograms. Braving the winter weather, Pohl and Hausman had warm clothing, an additional hot-air heating system and holders for thermos flasks at their disposal. A removable heating frame for the windscreen ensured a clear view, and the passenger seat could be folded down, allowing for some sleep during the marathon drive.

The two Czechoslovakians decided to travel to Monte Carlo from Athens – the Greek capital was just one of the possible starting points for the participants at the time. The journey was arduous: the first 850-kilometre stage from Prague to Trieste alone took the POPULAR SPORT 17 hours.

After arriving in Athens, Pohl and Hausman had four more days to recover and prepare the car’s technology for the tasks ahead. They had to do so without mechanics or a professionally equipped service vehicle. Then they were off: within four days they had to drive from Athens via Thessaloniki to Belgrade, on to Budapest and Vienna and finally via Strasbourg and Avignon to Monaco.

In total, Pohl and Hausmann had to cover a distance of 3,852 kilometres. Snow-covered mountain passes and snowdrifts made the journey even more difficult: wherever the Baťa tyres with off-road tread reached their limits, the pair resorted to snow shovels.

Zdeněk Pohl and Jaroslav Hausman battled these adverse conditions just as much as their many rivals, and they performed outstandingly: of 105 registered vehicles that started at the Monte Carlo Rally in 1936, only 72 finished. The ŠKODA team reached the principality’s casino without any penalty points and also successfully passed the technical inspection and dexterity test – they managed an impressive second place in the under 1.5-litre displacement class.

The duo would even have had the chance to win, as the class winners from Italy had repaired their car in Budapest in a way that contravened the rules while the ŠKODA works drivers were watching. In the spirit of fair play, however, the ŠKODA delegation decided not to protest.

Once the team had returned, it was decided in Mladá Boleslav to capitalise on this much-acclaimed success and offer the sports car in an unmodified series version. The attractively designed POPULAR MONTE CARLO made its debut in July 1936. A total of 70 roadsters and aerodynamic coupés of this special model had rolled off the production line by 1939.

A year later, Pohl and Hausman returned to Monte Carlo. This time, the pair brought a RAPID Coupé to the start in Palermo. The 4,134 kilometres to Monaco presented a tough challenge for man and machine: only four of the 30 vehicles that had also set off from Sicily reached the finish.

With 500 points, the team from Mladá Boleslav thought they were once again in second place in the under-1500 cm3 displacement class. Ultimately, however, they only managed fourth place and 26th overall: An English competitor protested and the stewards ruled that the rear-view mirrors of the RAPID Coupé were the wrong size, so Pohl and Hausman had two penalty points deducted.

After the Second World War, the political situation made it considerably more difficult for ŠKODA AUTO to participate in international racing and rally events, but it was not completely impossible.

At the 1949 Monte Carlo Rally, private Czech drivers entered an 1101 “TUDOR” and finished 83rd in a field of 166 participants. Afterwards, the factory delegation did not return to the ‘Queen of Rallies’ until January 1956. The initiative mostly lay in the hands of foreign ŠKODA owners: drivers from Finland and Norway were able to make their mark, especially in particularly wintry conditions.

At the Monte Carlo Rally in 1961, Scandinavian teams put their faith in the OCTAVIA TOURING SPORT, with which they dominated the action on the track: the Finns Esko Keinänen / Rainer Eklund not only won the 1.3-litre class but also achieved an impressive sixth place in the overall standings. In 1962, they were able to repeat this success with the same line-up. The hat trick for the OCTAVIA TOURING SPORT at the Monte was finally clinched by the Norwegians Edward Gjolberg and Carl Karlan on 24 January 1963. 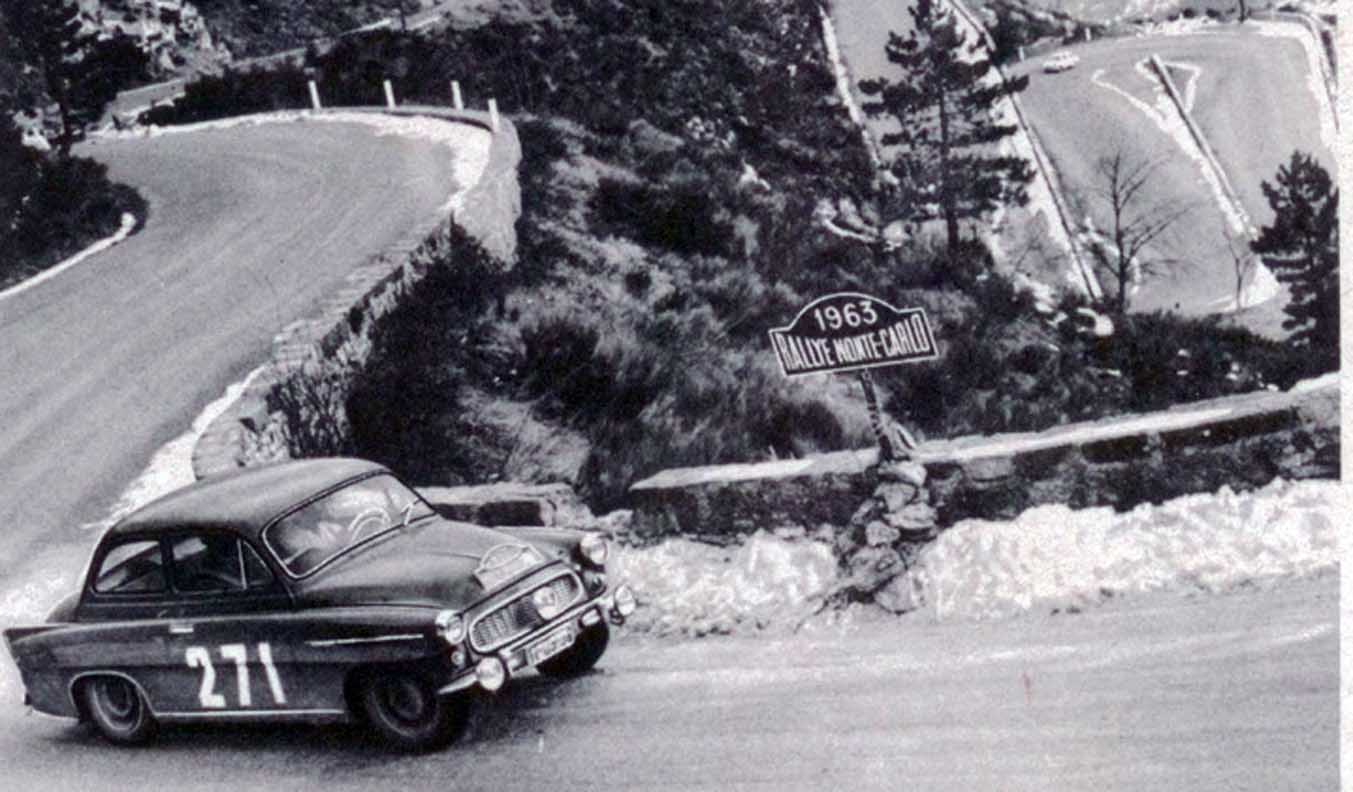 In the era of rear-wheel-drive vehicles with rear-mounted engines, ŠKODA continued to attract attention with successes at the Monte Carlo Rally. In 1977, for example, with the now legendary 130 RS Coupé: factory drivers Václav Blahna/Lubislav Hlávka and Milan Zapadlo/Jiří Motal drove their ‘Porsches of the East’ to a double victory in the under-1,300 cm3 class in the face of extremely demanding conditions.

One hundred ninety-eight teams took part in the world championship race, which was now organised according to modern standards. Only 43 vehicles reached the finish line, and the two ŠKODA crews moved up to 12th and 15th place. Svatopluk Kvaizar and Jiří Kotek retired with their 130 RS due to a technical issue. 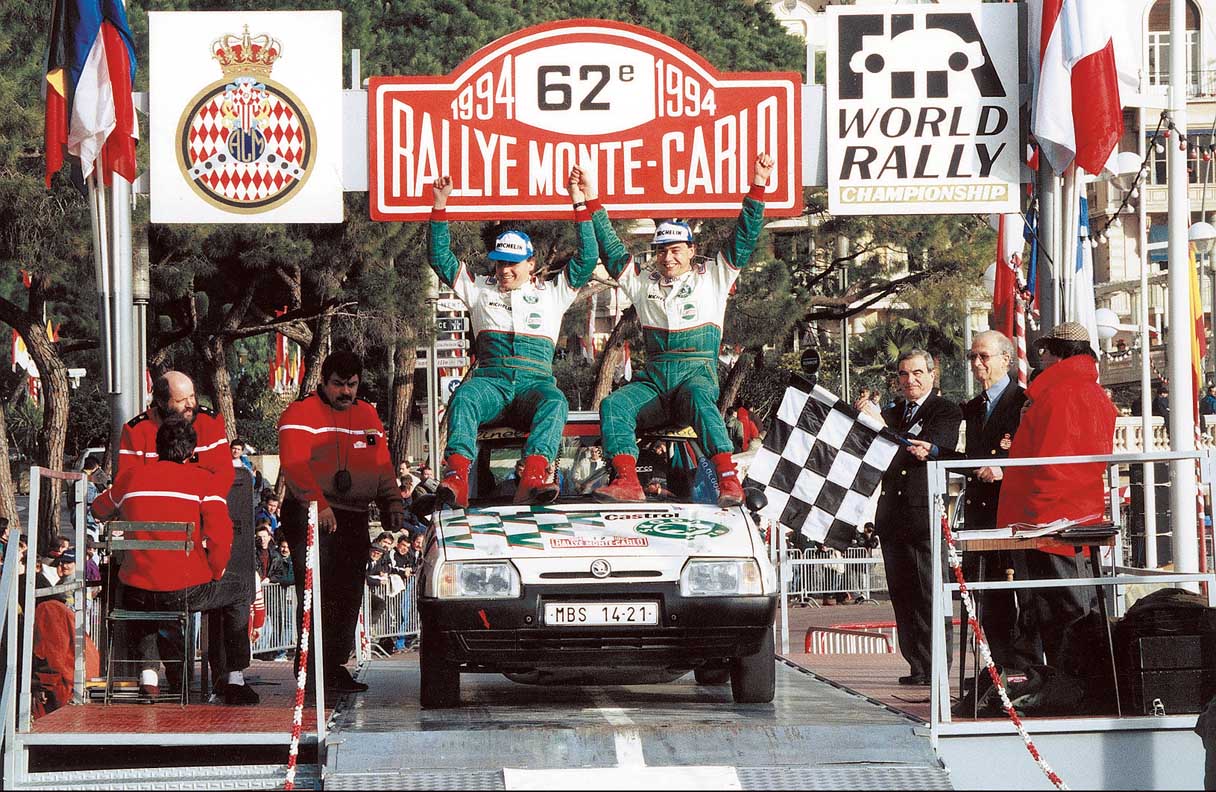 Recent history: from the FAVORIT to the FABIA R5

The FAVORIT hatchback model marked ŠKODA’s entry into the modern era of racing history. In 1991, the factory team started an impressive series of victories with the front-wheel-drive car at the ‘Queen of Rallies’: The young, talented Pavel Sibera and co-driver Petr Gross drove to the top four times in a row between 1991 and 1994. In addition, the Czech car manufacturer secured the FIA Cup in the F2 category of the World Rally Championship in 1994. In the under 2,000 cm3 class, Sibera finished fourth in 1993 in the FAVORIT 136 L, which only had two-wheel drive, despite the fierce competition.

The FAVORIT was soon followed by the ŠKODA FELICIA Kit Car at the Monte before the brand opted for a four-wheel-drive model for the first time in 1999 with the OCTAVIA WRC. In 1996, Siberia and Gross once again won their class, and at the 1997 Monte Carlo Rally, the Emil Triner / Julius Gál crew won not only their class but also the F2 category.

In 2001, Armin Schwarz and Manfred Hiemer finished fourth overall in the World Rally Car with a 2.0-litre turbo engine, before the FABIA WRC asserted itself on the international rally tracks from 2005. From 2009, the Monte Carlo Rally was not classified in the World Championship for three years, but rather in the Intercontinental Rally Championship (IRC).

In the IRC, the so-called Super 2000 vehicles such as the ŠKODA FABIA S2000 comprised the top category. Works driver Jan Kopecký and co-driver Petr Starý drove the four-wheel-drive car powered by a 2.0-litre naturally aspirated engine to fourth place at the outset. The Czech duo finished fifth in 2010 and eighth in 2011. The FABIA S2000 just missed out on its first overall victory twice: Juho Hänninen / Miko Markkula and Freddy Loix / Frédéric Miclotte finished in close second place.

In January 2011, ŠKODA presented the special FABIA MONTE CARLO model in Monaco to mark the 100th anniversary of the first run of the rally classic. At the time, the car manufacturer from Mladá Boleslav also used it to commemorate the 110th anniversary of its involvement in motorsport.

The first class win with the FABIA S2000 was claimed by Dutchman Kevin Abbring and his Belgian co-driver Lara Vanneste in 2012, before the Germans Sepp Wiegand and Frank Christian repeated this success at their Monte debut in 2013. Kopecký returned to the principality in 2017: alongside co-driver Pavel Dresler, he drove the FABIA R5 with 1.6-litre turbo engine to a strong second place in the WRC2 standings and eighth overall behind Norwegian brand colleagues Andreas Mikkelsen/Anders Jäger.

In 2018, Kopecký/Dresler finally stood at the top of the podium themselves: They led a confident one-two-three for ŠKODA in the WRC2 category, finishing ahead of Kalle Rovanperä/Jonne Halttunen and Olivier Burri/Anderson Levratti

On their return to WRC2, ŠKODA Motorsport supported Andreas Mikkelsen (NOR) and co-driver Ola Fløene (NOR), who took WRC2 victory at 2021 Rallye Monte-Carlo. Their success at the same time marked the first victory for the updated 2021 generation of the ŠKODA FABIA Rally2 evo. 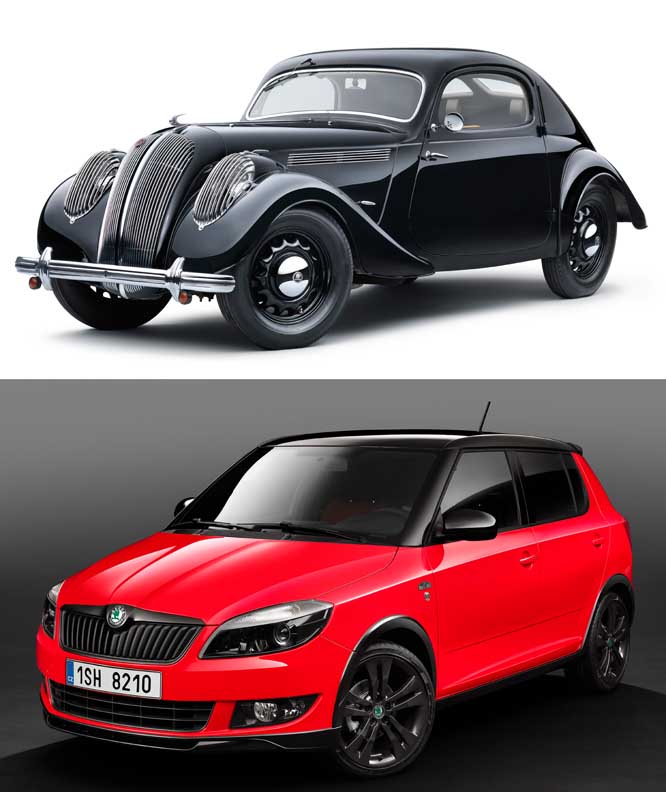 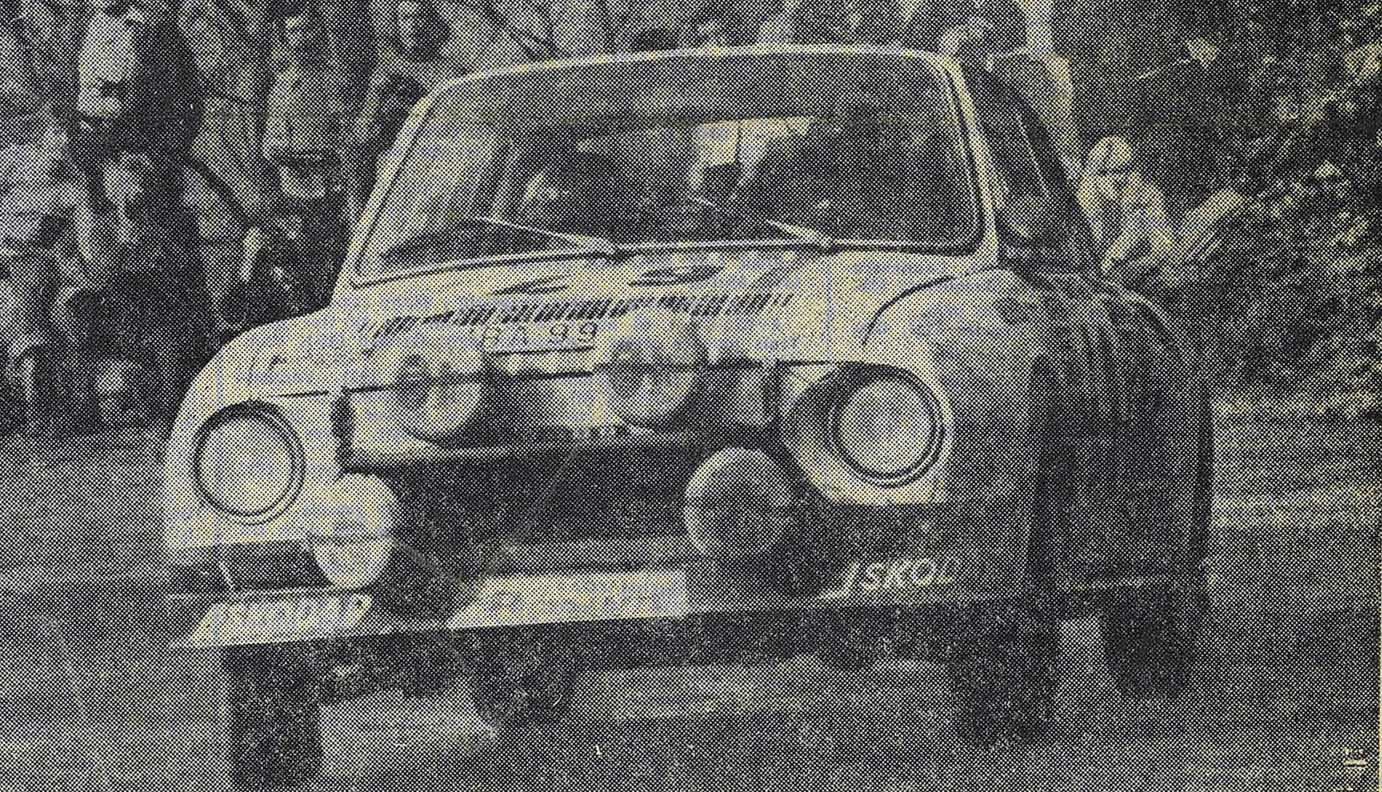 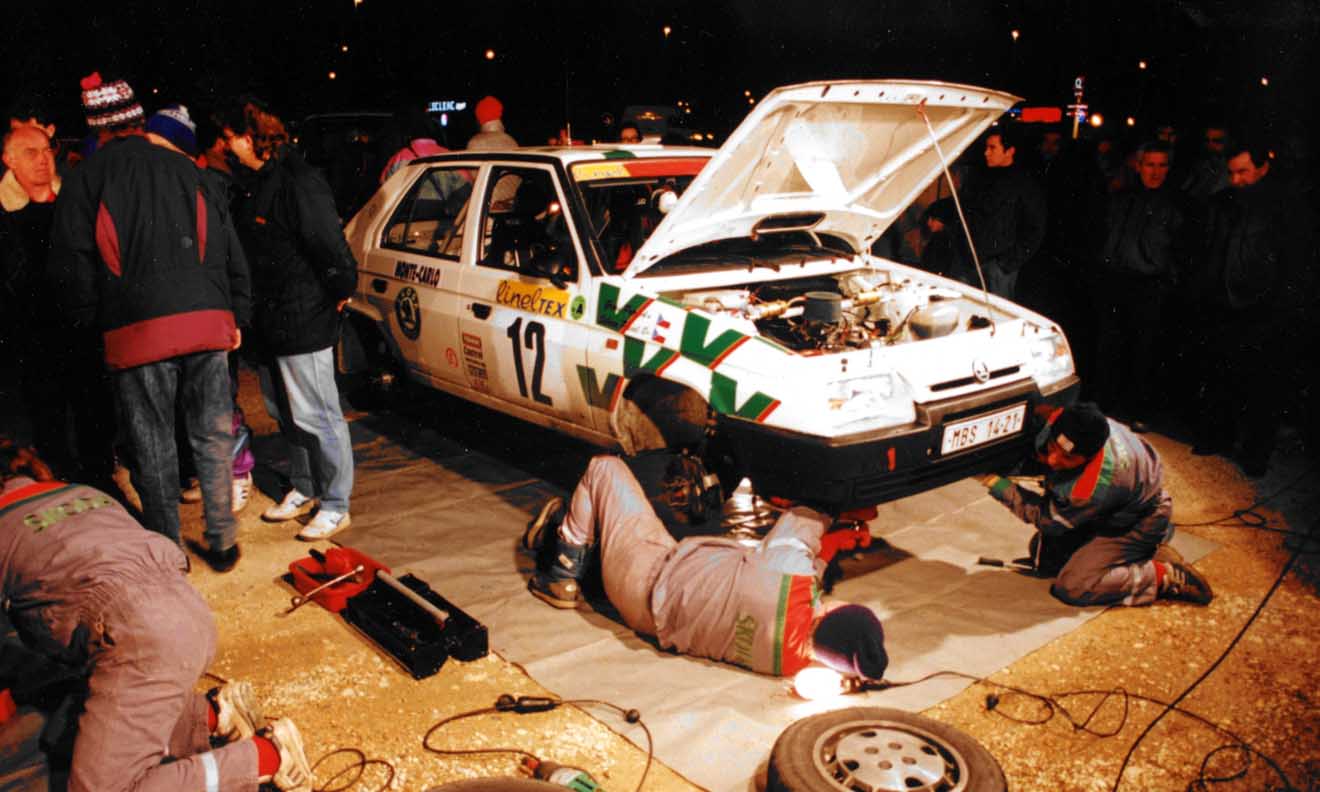 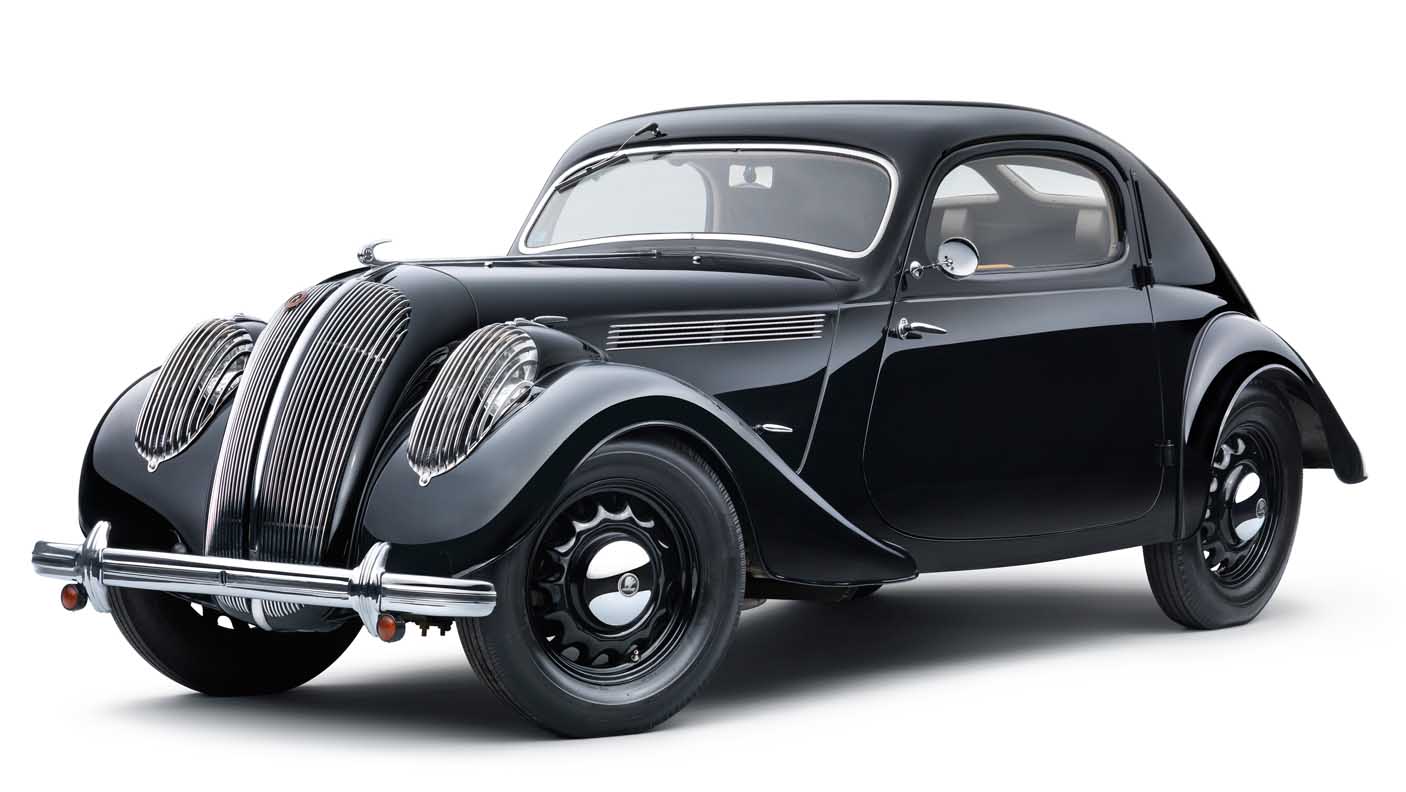 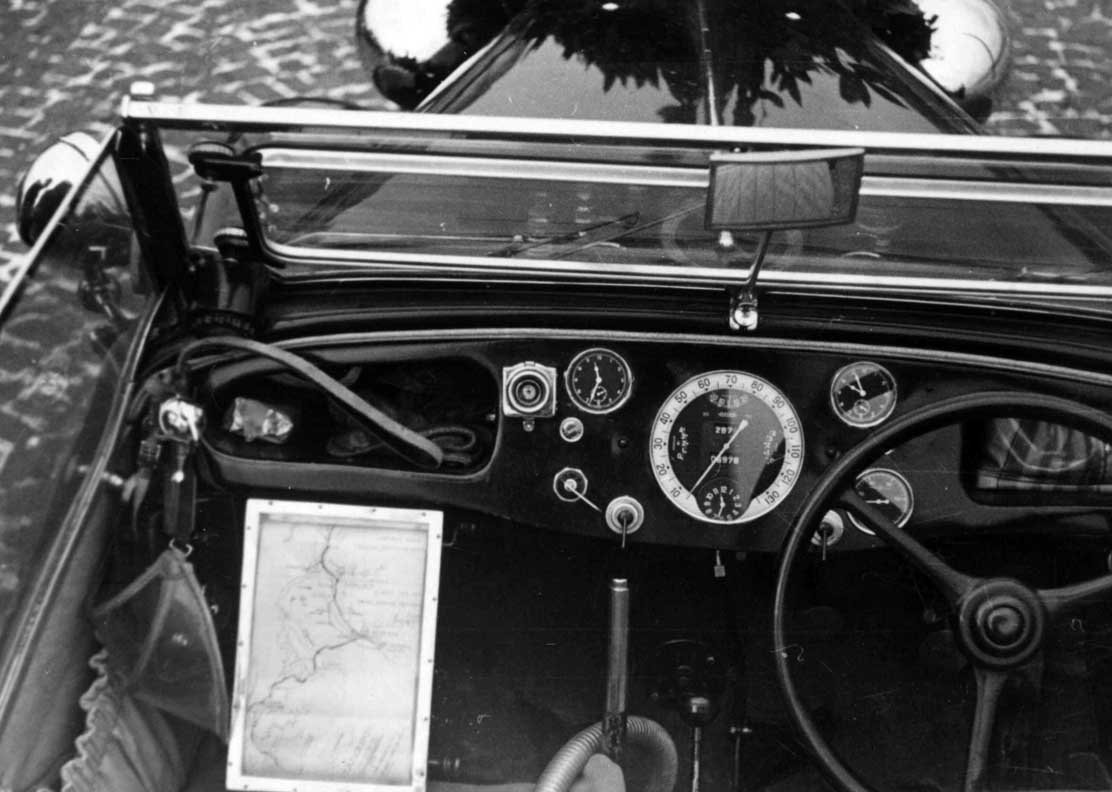 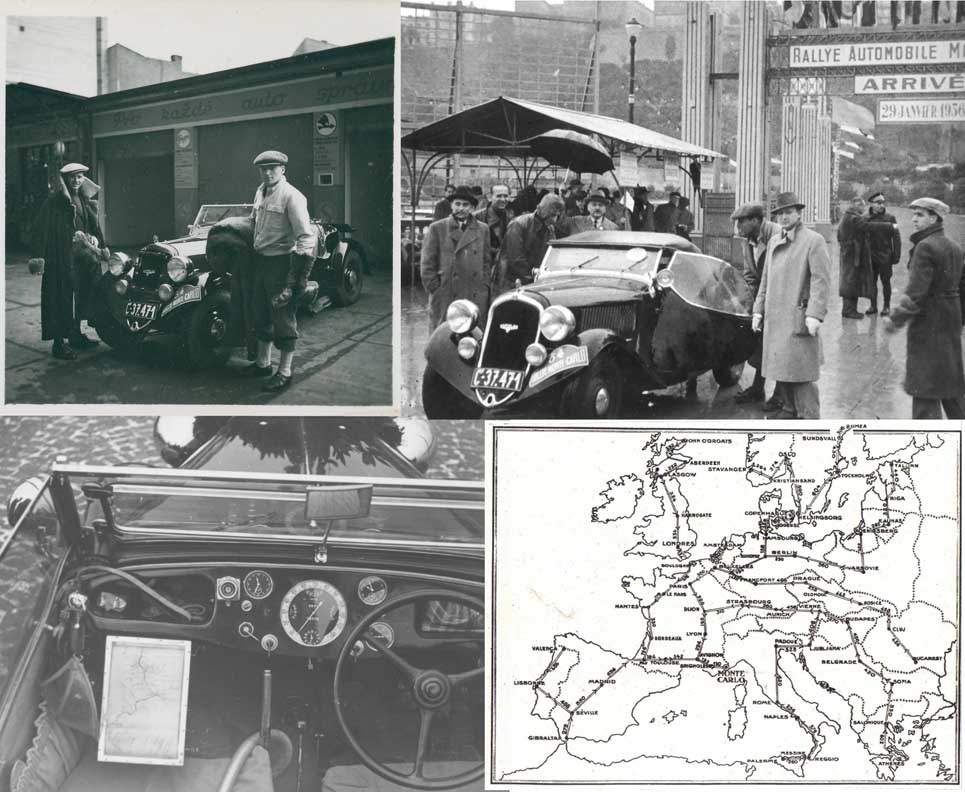 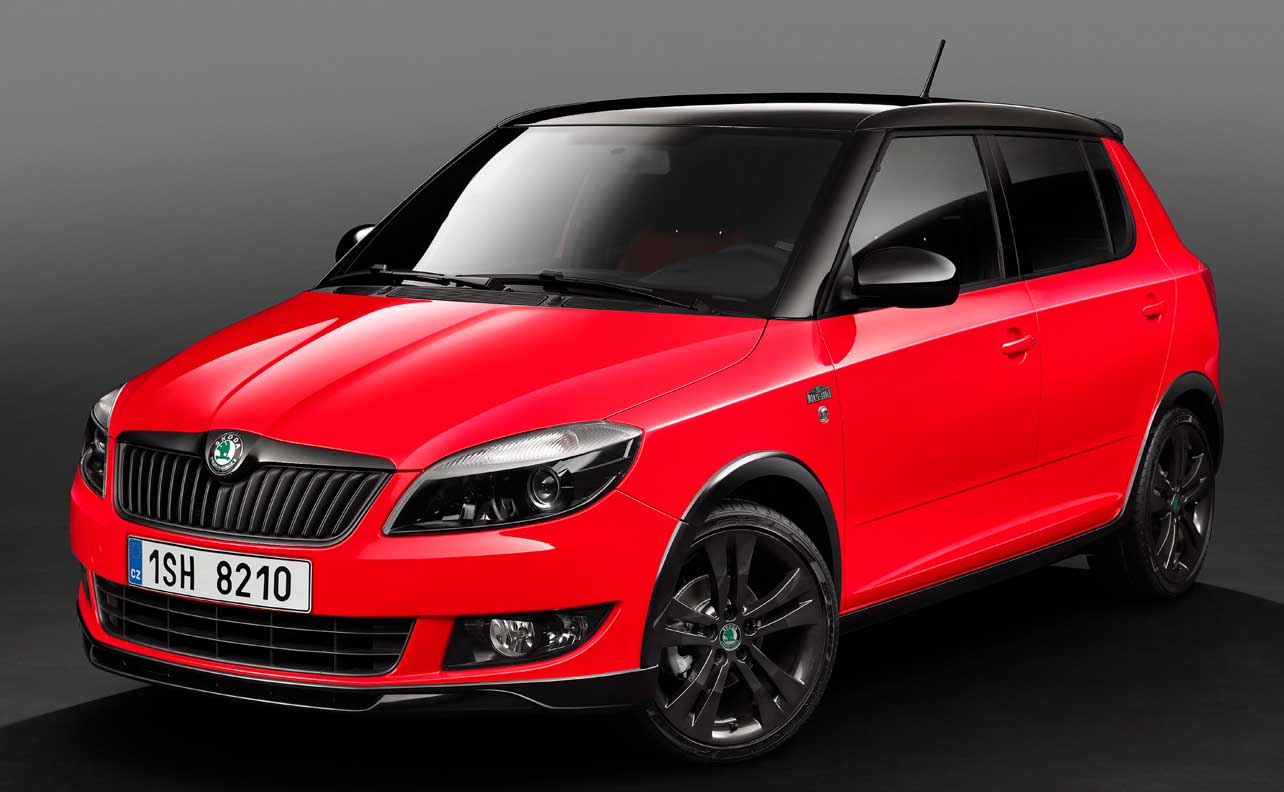 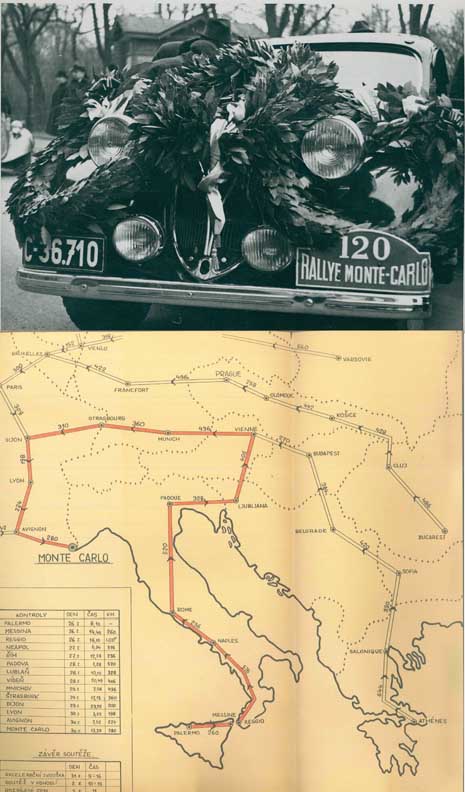 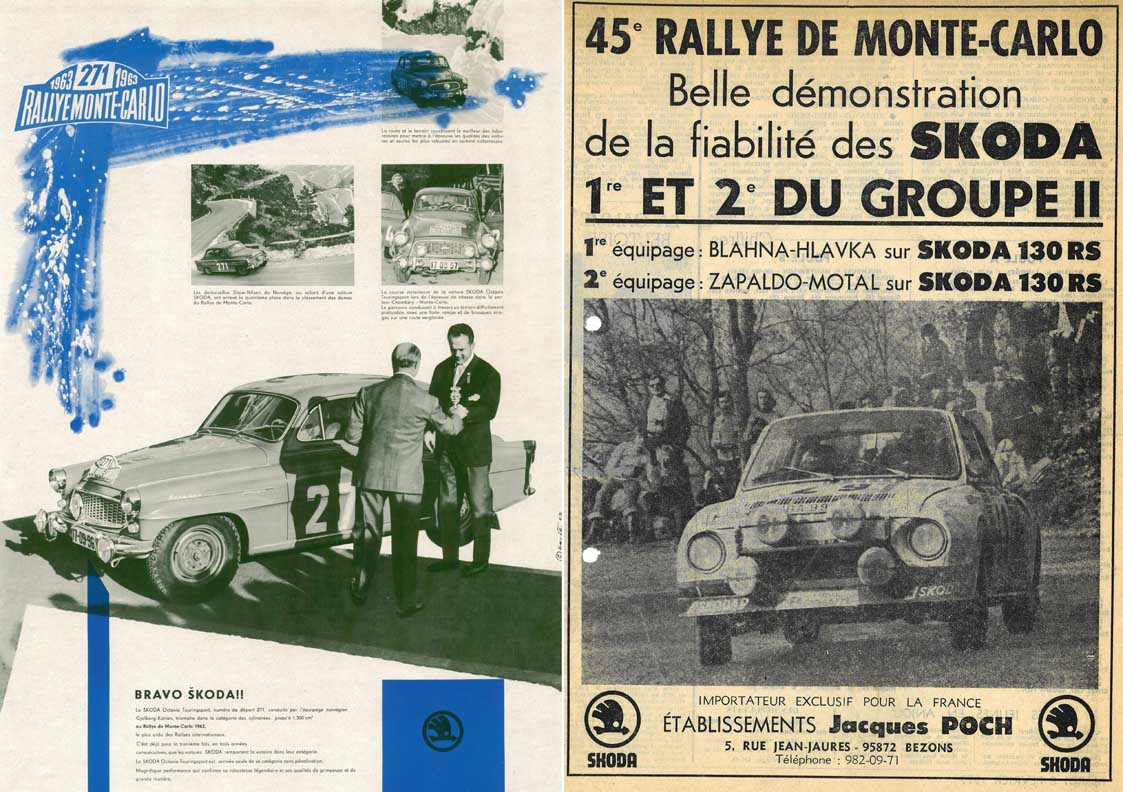 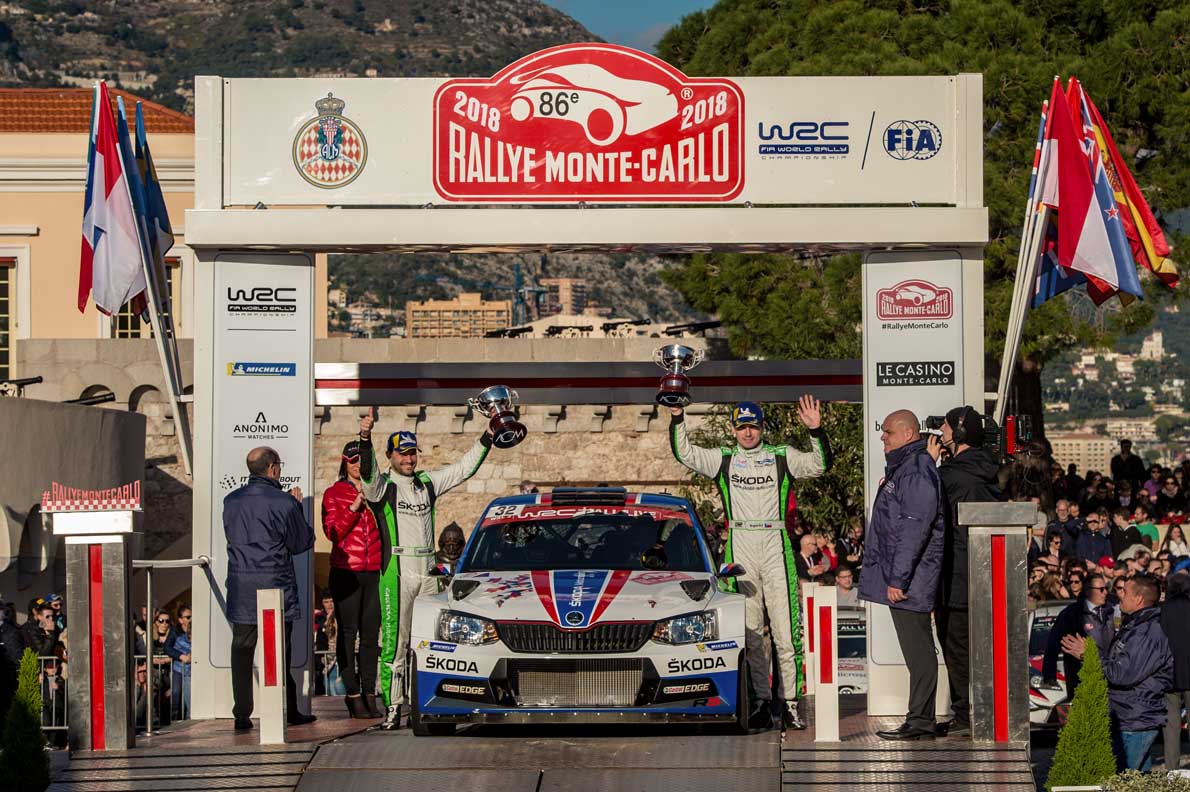