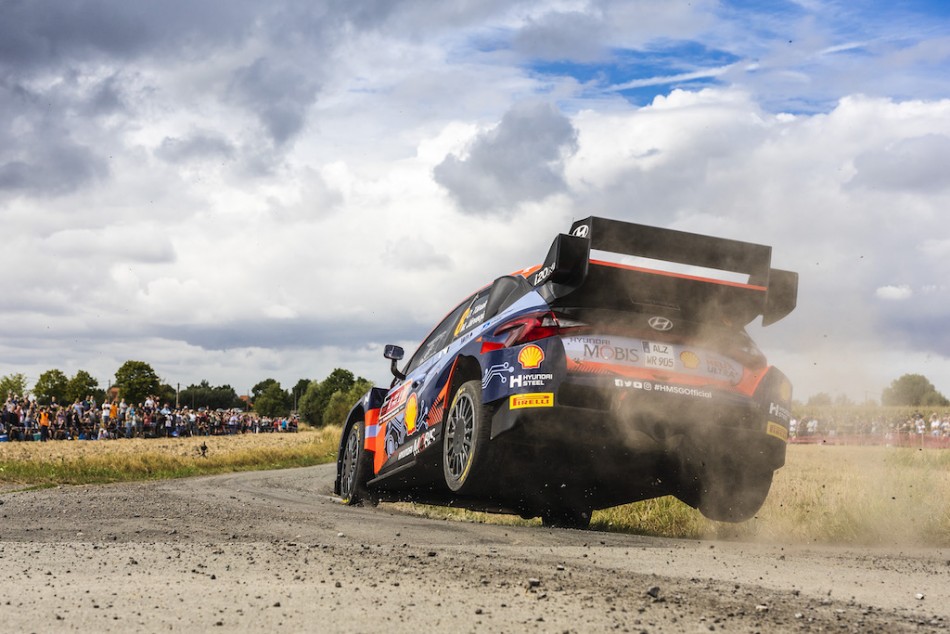 Belgian Neuville had been in front by 17.2s with two stages of Saturday’s second leg remaining but a crash on the penultimate stage handed the initiative to his fellow Hyundai Shell Mobis World Rally Team driver Tänak, who will carry an 8.2s advantage over Toyota Gazoo Racing’s Elfyn Evans into Sunday’s final leg.

Tänak, driving a Hyundai i20 N Rally1, briefly took charge after the opening Reninge test this morning but was quickly swept aside by Neuville as a rear differential issue hampered his progress during the morning.

After pulling 17.2sec clear of his colleague, Neuville looked all but set for a repeat victory on his home WRC round, but his challenge unravelled 6.4 kilometres into the Wijtschate stage when the Belgian understeered into a deep ditch on the outside of a left-hand corner.

Spectators were quickly on scene to extract the car, but Neuville pulled over just 1.1 kilometres down the road with damage.

His exit means Tänak is on course for his second-consecutive victory, having triumphed just a few weeks ago on Secto Rally Finland.

“Obviously in the morning we were struggling with the transmission, but at lunchtime we were able to change it and in the afternoon it was working,” Tänak said. “It was just a different setting and it took me some time to adapt to it, but in the end I got used to it and started to trust it more.

“Tomorrow will be far from easy – I think it will be a big push in the morning. Elfyn is doing a good job and it will not be easy for him, but let’s see. It’s still a relatively long day tomorrow,” he added.

Back at service, Neuville explained that he was simply caught out by a patch of loose gravel which had been pulled onto the road after his route note crew had driven through.

“It was basically full of dirt from the cars in front,” he said. “We had nothing in the pacenotes and we weren’t aware it would be so slippery, so we got caught by surprise and understeered into the ditch.”

Evans was able to close in on Tänak during the morning loop but lost ground later in the day once his rival had made changes at the mid-leg service. He’s more than one minute clear of GR Yaris Rally team-mate Esapekka Lappi, however, with the Finn filling the final podium spot after a drama-free day.

Hyundai pilot Oliver Solberg is almost two minutes further back in fourth overall. The young Swede has been in a close duel with M-Sport Ford Puma Rally1-driving Frenchman Adrien Fourmaux, who day two ended 14.3s behind after being lumbered with a 20sec time penalty for arriving late at the start of SS15.

Both drivers moved up the order early in the day when Craig Breen, who had been running fifth, rolled his Puma into retirement after running wide through a left-hander on the Dikkebus stage this morning.

After plummeting down the order with a transmission fault on Friday, Takamoto Katsuta fought back to take sixth overall. It wasn’t an easy day for the Japanese as a hybrid unit issue left his Yaris intermittently lacking extra boost.

Gus Greensmith is more than 18 minutes adrift of the leaders after haemorrhaging time in the morning. The Briton’s Puma left the road on SS10 and he had to limp through two stages with a broken rear brake disc.

Sunday’s closing leg is drastically changed from 2021 and takes place entirely within the Flanders region having headed southeast to Circuit de Spa-Francorchamps last year. Double runs of Watou (12.36 kilometres) and Kemmelberg (13.31 kilometres) are separated by a 20-minute service halt in Ypres, with the second pass of Kemmelberg forming the bonus points-paying Wolf Power Stage. Watou 1 is due to begin at 08h43 CET with the Power Stage set to start at 13h18.