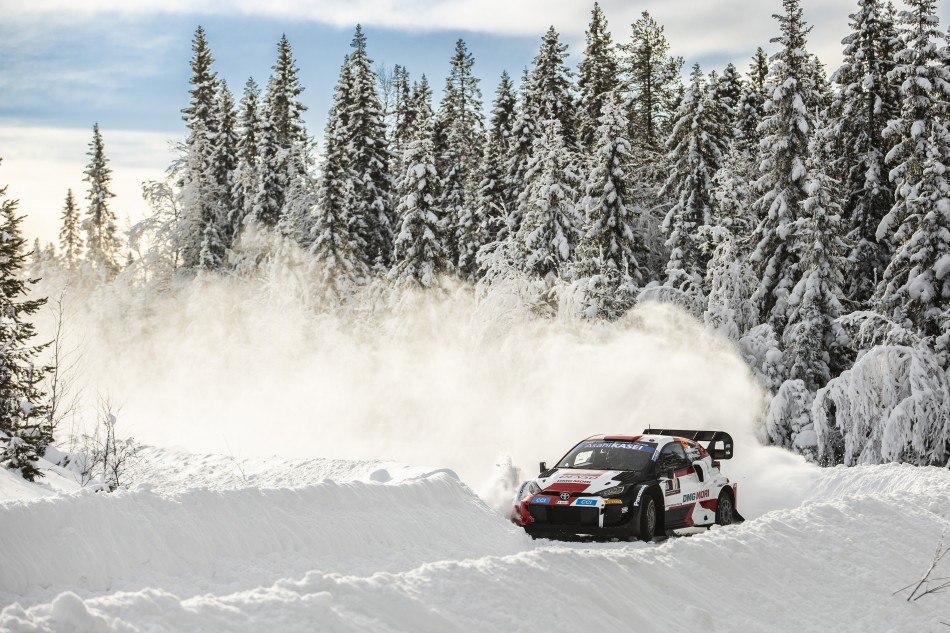 Three different drivers led Rally Sweden across Friday morning’s fast and furious first leg but it was Flying Finn Kalle Rovanperä in front after the opening loop of speed tests.

Despite the perceived disadvantage of opening the snow and ice-coated roads, fastest time in the morning’s final Sävar speed test promoted the Toyota GR Yaris driver from second to first. He held a 10.4sec lead over home hero Oliver Solberg.

Rovanperä was second in both the earlier Kroksjö and Kamsjön special stages but found the going far from easy in the first of three days action in this second round of the FIA World Rally Championship.

“This morning was already quite tricky but the last stage was the best of all,” he said. “The only issue is when you are first car, there are a lot of snow blocks on the inside and outside of corners. I thought the roads would be cleaner but the afternoon could be even more difficult.”

Solberg enjoyed the best morning of his WRC career. The 20-year-old was in the top three throughout, despite feeling his pace-notes were too optimistic in Kamsjön and, in contrast, an over-cautious approach to Sävar.

Elfyn Evans completed the top three in another GR Yaris. He was 11.2sec off the lead but frustrated with his performance. “I don’t have great confidence with the car to be honest,” the Welshman admitted. “I’m struggling with the front end so it’s hard to commit and be smooth.”

A further second back was a relieved Thierry Neuville in a Hyundai i20 N. An electrical issue forced the Belgian and co-driver Martijn Wydaeghe into urgent repairs between Kamsjön and Sävar, and he was thankful to drive most of Kamsjön at road speed after an incident for Craig Breen brought a temporary halt to the test.
Ott Tänak led after the opening stage but damage to his i20 N’s front bumper affected the car’s aerodynamics on the fast forest roads. When the bumper fell off in Sävar, the Estonian conceded 10sec to Rovanperä and slid to fifth.

Esapekka Lappi made a stunning start to his Toyota Gazoo Racing comeback after three years away from the Japanese manufacturer. He posted fastest time in Kamsjön to lead the rally but a stall at the start of the next stage and a more restrained approach relegated him five places.

Just 3.6sec blanketed second to sixth, but Takamoto Katsuta was a further 18.7sec back in seventh in a GR Yaris. He had 20sec in hand over Gus Greensmith, who lost time with a first stage overshoot followed by problems with his Ford Puma’s hybrid system and gearbox.

The Irishman dived into a snowbank early in Kamsjön. He regained the road but a second visit into the snow later proved terminal as his Puma came to rest on top of a bank.