WRC – Ogier On Course For An Eight World Title 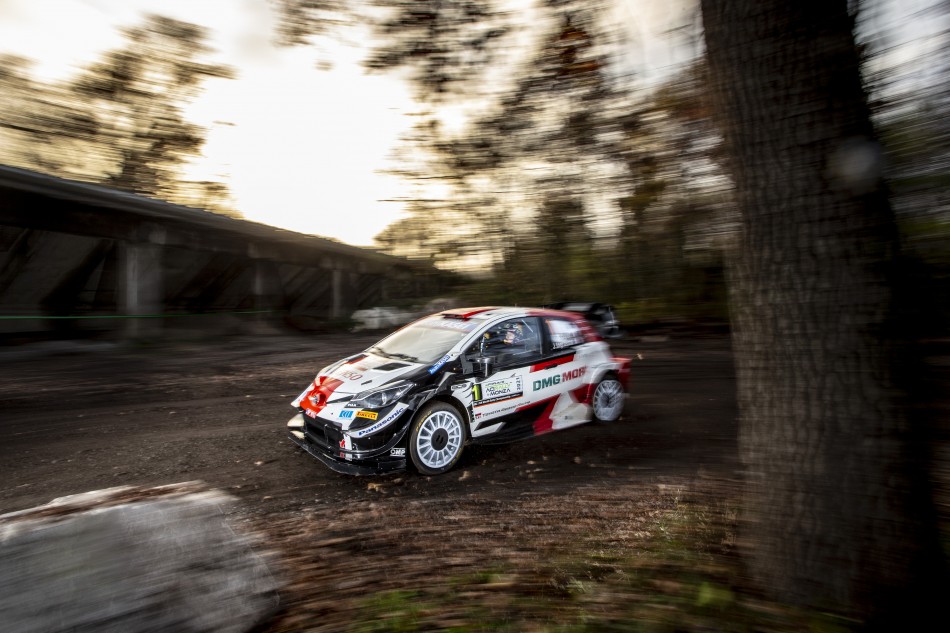 The lead changed hands five times in six speed tests as Ogier snatched top spot with a charging drive through the closing special stage on Monza’s maze of roads. He leads Evans by just 0.5sec after nearly 215km of flat-out action.

A top-three finish for Ogier would secure the crown in his final rally before retiring from full-time competition. While the Frenchman would like nothing more than to bow out with a 54th rally victory, his eye remains on the title.

Ogier snatched top spot from Evans in the opening stage in the foothills of the Italian Alps. The lead changed twice more in the morning before the action switched to Monza for two afternoon stages – and another two turnarounds at the top of the order.

Thierry Neuville restarted with the aim of gate-crashing the fight for the lead. He won the opening San Fermo test in his Hyundai i20 but thumped a barrier in the next stage on cold tyres, ripping the bumper and aero from the front of the car.

He conceded almost 30sec to slip behind team-mate Dani Sordo and battled through the morning’s remaining two tests with an aero imbalance. Sordo had early handling issues but became happier as the day progressed and ended third, 19.2sec of his colleague.

Oliver Solberg, driving another i20, was fifth, 34.6sec behind Neuville. The young Swede drove his tyres to the limit on the abrasive mountain roads and a similarly aggressive approach at Monza resulted in a few unplanned slides.

Sixth was Japan’s Takamoto Katsuta. The Yaris pilot found grip hard to come by initially this morning and a couple of mistakes on the track this afternoon frustrated him. He ended 17.6sec adrift of Solberg and 38.3sec clear of Teemu Suninen, who got the better of Gus Greensmith.

Greensmith was delayed by brake problems on his Ford Fiesta throughout the morning and Suninen, driving an i20 World Rally Car for the first time, eased ahead into seventh.

The pair were covered by 7.7sec, Suninen happy to escape unscathed after touching a barrier but struggling to find his braking points on the circuit tests.

With Toyota Gazoo Racing intent on securing the manufacturers’ title, Kalle Rovanperä drove cautiously to secure the points required should Ogier and Evans hit trouble ahead in their furious fight. The Finn was ninth.

But Bulacia blew his chances on Saturday’s very first stage when he overcooked a left-hand corner and slid off the road. His Škoda Fabia Rally2 took a heavy impact which ripped off the rear right wheel and ended his day.

Bulacia’s retirement left Huttunen a lonely first as he continued to gain experience with his Fiesta machine. The Finn was slower than Andreas Mikkelsen on all but one stage, but still led the Norwegian by 1min 01.6sec at close of play.

Home hero Andrea Crugnola cut through the FIA WRC3 field to steal a last-minute lead. Driving a Hyundai i20 N Rally2, the Italian mounted a charge from the very first stage on Saturday. At close of play, 32-year-old Crugnola led the category by 6.5sec from Rossel, who remained focused on his title fight, with Škoda Fabia Rally2 rival Kajetan Kajetanowicz.

Sunday brings not only the closing day of the season, but also the final day of the World Rally Car era ahead of the introduction of hybrid-powered Rally1 cars in 2022. All three stages, covering 39.53km, are at Monza, with the finale forming the bonus points-paying Wolf Power Stage.