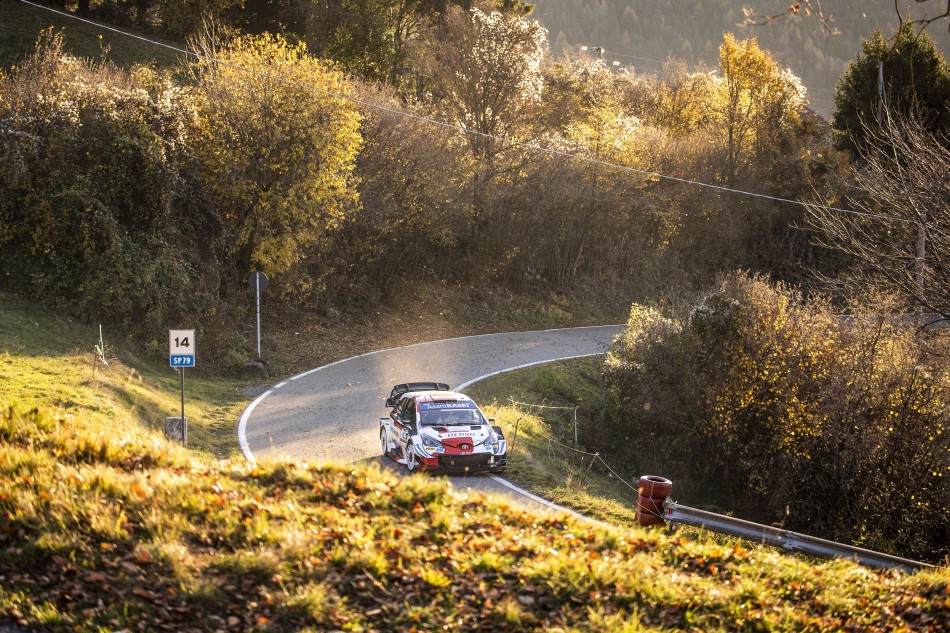 Sébastien Ogier led ACI Rally Monza after a breathless Saturday morning in the Italian Alps in which the lead changed hands three times in four stages.

Ogier headed Toyota Gazoo Racing team-mate Elfyn Evans by 5.2sec at the midpoint of the penultimate leg. The Yaris World Rally Car driver remains on course to sign off his full-time career here with an eighth FIA World Rally Championship in nine seasons.

Ogier snatched the lead from Evans in the opening San Fermo mountain speed test, only for the Welshman to regain top spot in the following Selvino. Ogier was back in front after the second pass through San Fermo and extended the margin in the repeat of Selvino.

“Five seconds is not that much, but it’s better to have them than not,” said Ogier. “We had a good feeling in the mountains this morning. So far so good for the championship, but if anything happens to me then Elfyn has an easy win and that would be it, so we must stay focused.”

Evans admitted the morning had not been easy. “I struggled in the first stage of the loop, both times through. Seb has been going pretty well and this afternoon he will be hungry to do better than he did yesterday so we have to keep trying to make improvements,” he said.

Dani Sordo demoted Hyundai i20 team-mate Thierry Neuville from third. Neuville started the morning well with fastest time in San Fermo but hit a barrier in the next test on cold tyres, ripping the front bumper and aero from his car.

Neuville lost almost 30sec but although the car looked far from pretty, he continued to set strong times and trailed Sordo by 18.5sec. Spaniard Sordo complained of understeer initially but was happier with the handling by the end of the loop.

The abrasive asphalt was tough on tyres and Oliver Solberg admitted his were on the limit as he completed the final kilometres of the loop. The Swede kept things clean to retain fifth in his i20, 25.8sec behind Neuville.

An upbeat Takamoto Katsuta was sixth in another Yaris. The Japanese pilot struggled for grip initially, but things quickly improved and he returned to the Monza service park 17.3sec adrift of Solberg.

Brake problems slowed Gus Greensmith all morning and the Ford Fiesta driver accepted the inevitable when Teemu Suninen overhauled him for seventh. Suninen survived a brush with a barrier and the pair were separated by 10.5sec.

Kalle Rovanperä remained in full cautious mode as he focused on delivering the points required to secure the manufacturers’ title for Toyota should Ogier and Evans hit trouble ahead. The Finn was ninth with FIA WRC3 leader Yohan Rossel 10th.