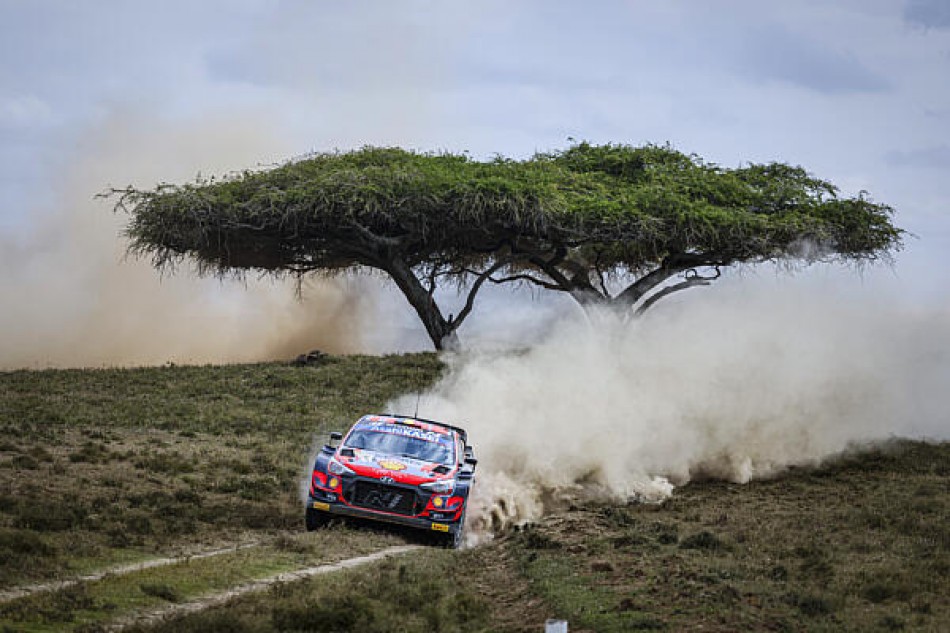 The Belgian won three of the six punishing and sandy speed tests on the shores of the Great Rift Valley’s Lake Naivasha to lead Japan’s Takamoto Katsuta by 18.8sec, despite limping through the final test with two punctures and an engine problem.

Neuville won two of this morning’s three stages in his Hyundai i20 to lead Kalle Rovanperä by 5.1sec. The Finn briefly snatched top spot in the afternoon’s opener, but his hopes were wrecked when his Toyota Yaris became trapped in deep dust in the final Oserian stage.

The car was towed off the track into retirement, allowing Neuville to open clear air over Katsuta.

Katsuta lost time when he stalled his engine, but the Japanese driver soared from fourth to second in the closing stage after Rovanperä’s demise and a puncture for Ott Tänak, which cost the Estonian almost a minute.

Tanäk, in third and trailing Katsuta by 37.0sec, claimed he had driven at no more than 60 per cent pace in his i20 and ‘even that was too much in some places’.

Championship leader Sébastien Ogier was 1min 49.4sec off the lead in fourth after a broken oil canister in his Yaris’ rear suspension slowed his morning progress.

Ford Fiesta twins Gus Greensmith and Adrien Fourmaux completed the top six. Greensmith broke an anti-roll bar but their cautious approach paid dividends as they avoided the carnage that befell their rivals.

Second in the championship Elfyn Evans retired 300 metres from the end of the Kedong stage (SS3) when he clipped a rock and broke the front right suspension on his Yaris.

Dani Sordo went out in the same test when a stone smashed a suspension arm on his i20. His car oversteered sideways off the stage and ploughed through the vegetation before coming to rest in a ditch.

Oliver Solberg struggled with damaged rear right suspension from the off and eventually called it a day after Kedong with a damaged roll cage adding to his troubles. Lorenzo Bertelli completed the tale of woe when his Fiesta stopped with a coolant leak.

Roads further north around Lake Elmenteita host Saturday’s 132.08km of action, the longest leg of the weekend. Once again, a morning loop of three tests in repeated in the afternoon after service.