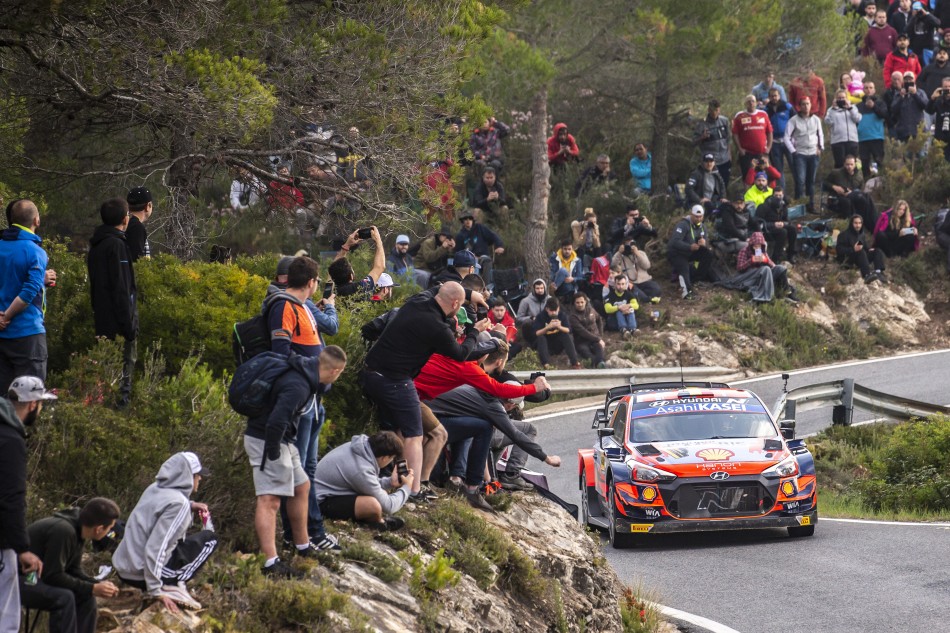 The dominant Belgian, who was fastest in Friday’s final three special stages, stretched his unbeaten run with a masterful drive on smooth and flowing roads in the Costa Daurada hills to increase his advantage over Elfyn Evans to 9.0sec.

The Hyundai i20 pilot continued to fight against understeer and fog in the opening Savallà test, but nobody had an answer to his pace as he strives to secure back-to-back victories in Spain in this penultimate round of the FIA World Rally Championship.

“It wasn’t an easy start with fog moving through the stage and the road was really dirty,” he said. “I didn’t expect that. We tried to have a clever approach and avoid the sharp edges and the cuts on the last stage. We’re still working a bit on the set up. We could go faster if we weren’t struggling with the understeer.”

A self-critical Evans blamed himself for not being committed enough in the opening Savallà and reflected on set-up changes made for today’s more flowing roads.

“I just didn’t quite click with the feeling of the car,” said the Welshman. “We made some subtle changes to try to improve it but I’m not sure it was the correct direction. It wasn’t so different, but I struggled to find the sweet spot we had yesterday. Running at the back now we get more dirt and I think that suits us less than the conditions yesterday morning.”

Championship leader Sébastien Ogier hung onto third in another Yaris, but Dani Sordo was doing all he could to unseat the Frenchman. The gap between the pair dwindled to just two-tenths after a strong morning for the Spaniard as drivers returned to service in Salou.

Ogier was unhappy with the way his Yaris behaved in corner cuts but acknowledged that he must raise his own performance and take more risks to keep Sordo behind.

Kalle Rovanperä remained fifth in another Yaris, the gap from Sordo increasing to 21.5ec. The young Finn punctured in the middle Querol – Les Pobles test but was glad to still be running. “I had a huge moment in the last stage – maybe one of the biggest I have ever had. We were lucky to escape,” he explained.

Adrien Fourmaux was sixth in a Ford Fiesta, the Frenchman second fastest in Querol – Les Pobles but it wasn’t such a good morning for team-mate Gus Greensmith. He punctured in El Montmell and conceded more than a minute to drop from seventh to ninth.

His problem promoted Oliver Solberg and Nil Solans, competing in a World Rally Car for the first time, to seventh and eighth in i20s. FIA WRC2 leader Eric Camilli completed the leaderboard in a Sports & You-entered Citroën C3 Rally2.